Kaustuv Kundu scored an unbeaten 8/9 to win 3rd TTCA Rating Open 2022. He finished a half point ahead of the field. S Prasanna and Arpan Das made 7.5/9 each. They were placed second and third according to tie-breaks. Kaustuv defeated the eventual runner-up in the seventh round. The total prize fund of the tournament was ₹360000. The top three prizes were ₹55000, ₹40000 and ₹25000 along with a trophy each. A total of 238 players took part in this event. The organizer Tiswadi Taluka Chess Association took the initiative to popularize chess across the state of Goa by organizing tournaments like these. Photo: IA Arvind Mhamal

Kaustuv's fourth triumph of the year

This is Kaustuv's second Classical Rating Open tournament victory of the year. Previously he won the 4th Bangalore Open 2022 in April. Overall fourth rating tournament first place finish and if non-rated events are considered, then fifth in total. 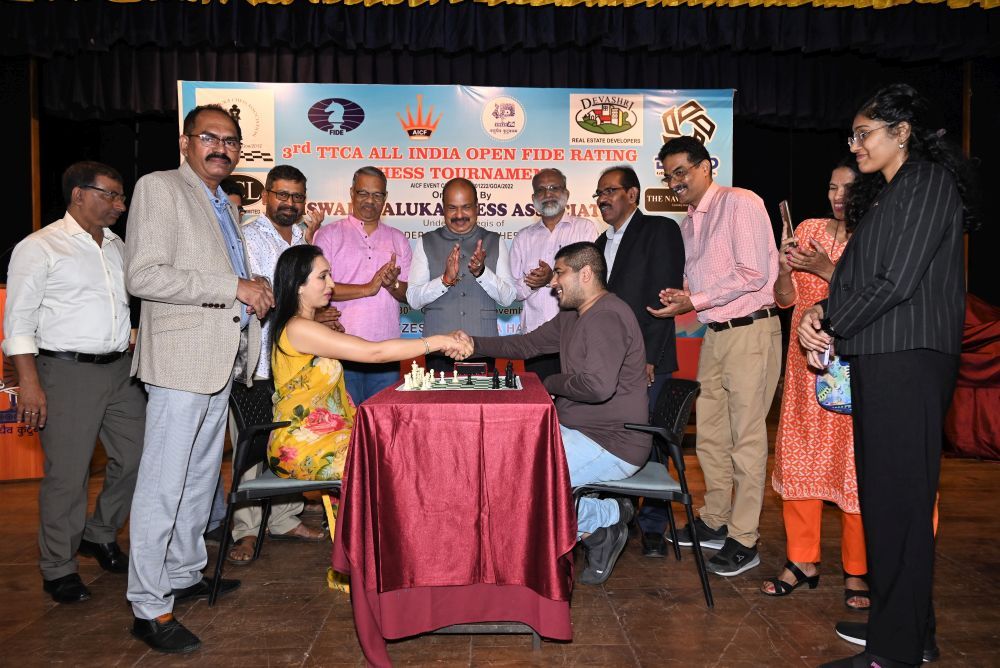 Making the inaugural moves on the board: Ms Pallavi Dempo and CM Niraj Saripalli.

A total of 238 players including 2 IMs took part from various parts of the country and one from Hungary. The five-day nine-round Swiss league Rating tournament was organized by Tiswadi Taluka Chess Association at Institute Menezes Braganza Hall in Panaji, Goa from 30th October to 3rd November 2022. The time control of the tournament was 90 minutes + 30 seconds increment from move no.1.