After a double round day in the mid way stage of a tournament, things suddenly start getting clear as to who would be the favourite to win the tournament. But at the Goa GM International 2018, seven out of ten rounds have been played and absolutely nothing is clear. We have five GMs and one FM in the lead with a score of 6.0/7. The big news of the day is definitely FM Ankit Gajwa, who is playing the tournament of his life. Ankit beats GM Himanshu Sharma, GM Martyn Kravtsiv and GM Ziaur Rahman in three consecutive rounds. Madhya Pradesh's good run in the tournament continued as apart from Ankit, Anuj Shrivatri was able to beat the strong Belgian GM Vadim Malakhatko. An illustrated report form the Shyama Prasad Mukherjee Stadium in Goa.

At the end of seven rounds we have six leaders with the score of 6.0/7 at the 1st Go International Open Grandmaster Chess Tournament 2018. We have the Iranian GM Pouya Idani, Ukrainian GMs Neverov, Bernadskiy and Sivuk and Indian GM Deepan Chakkravarthy. All five of these have won many strong tournaments in their lives and leading after seven rounds is nothing new for them. But there is a sixth leader! He is no GM, not an IM. He also doesn't have any IM norms! He is FM Ankit Gajwa from Madhya Pradesh and he is playing the best chess of his life at the Shyama Prasad Mukherjee stadium. 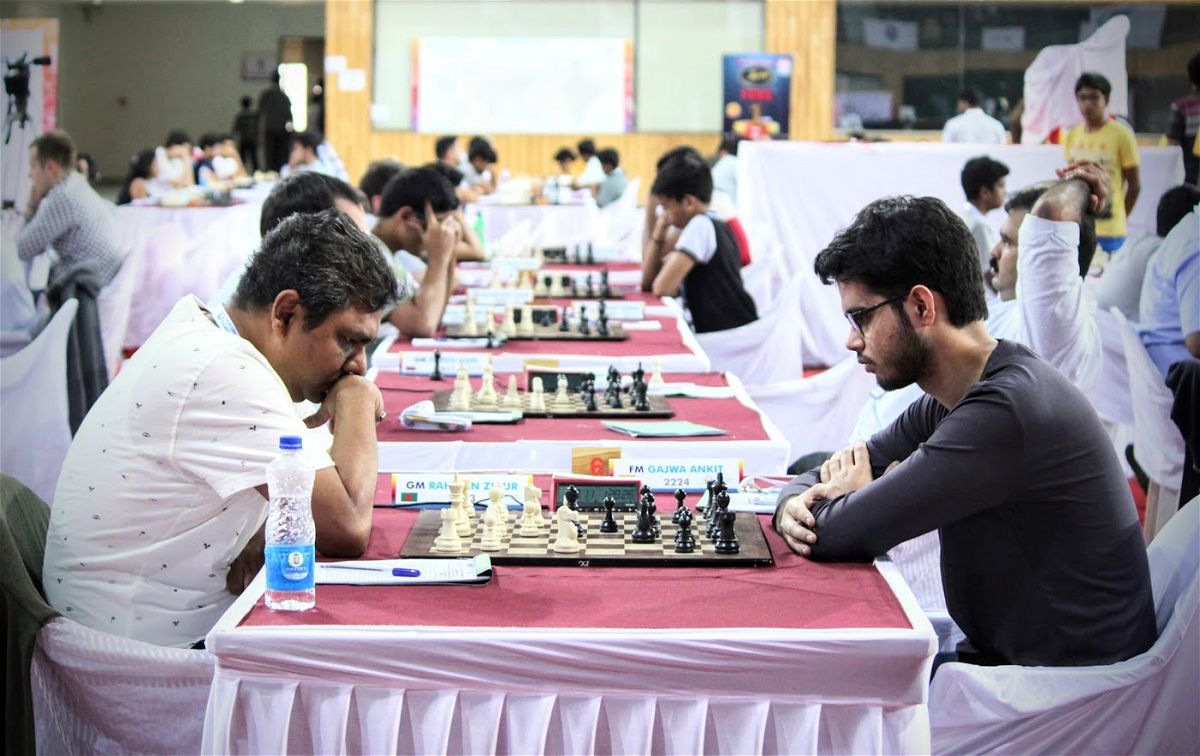 Ankit is a B.com graduate and after finishing his graduation decided to take a break from education for one year in order to pursue chess seriously. This one year break turned into two and Ankit saw no real rise in his rating. In fact from a 2300+ player, he has come down to 2224. "At this event I decided not to think about ratings or result but just focus on making good moves", said Ankit to ChessBase India after his seventh round game. Ankit has scored wins over GM Himanshu Sharma, top seed GM Martyn Kravtsiv and GM Ziaur Rahman. All three games have been completely different. While against Kravtsiv it was a miniature where the Ukrainian blundered in a worse position, against Himanshu Sharma, Gajwa scored a clinical victory. GM Ziaur Rahman was not so happy losing his game to Ankit and exclaimed after the game that the Madhya Pradesh lad was very lucky to have won such a position. Here's the interview with Ankit after the seventh round. He speaks about his wins and at the same time also gives pearls of advice like how maintaining a regular database can help a student become a better chess player.

At the recently concluded Sinquefield Cup 2018 Magnus Carlsen was up against Sergey Karjakin. In the following position Carlsen took a very surprising decision: 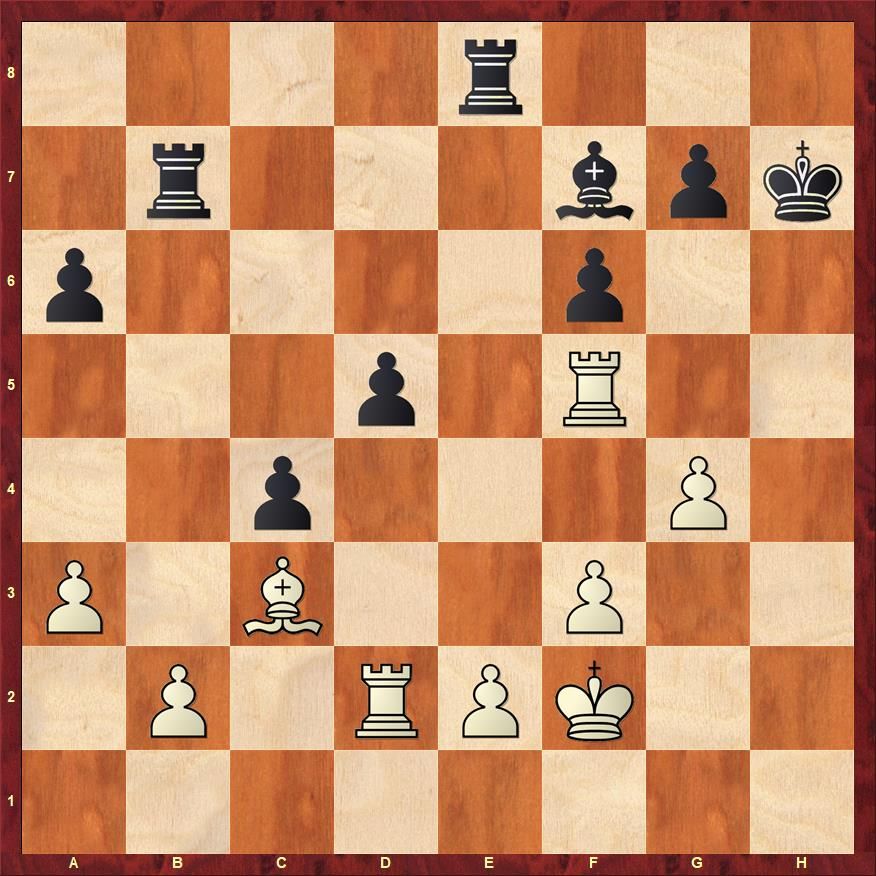 Magnus Carlsen took the pawn on d5 with his f5 rook and sacrificed an exchange.

Of course the bishop on f7 wasn't great, but it's what remains on the board that matters and not what goes out of it. In the ensuing position White has a strong bishop on c3 and the black rooks cannot really coordinate. When Ankit was seeing this game back in August, he saved this position in his database and wrote "risk-free exchange sacrifice" for White. First of all it show's Ankit's approach towards the game. He felt that the exchange sacrifice was the most natural progression in the position. I know some people who thought it was a bad decision and that it made Black's task of holding easier. But it was not the case. Magnus Carlsen won the game and proved that the practical value of his sacrifice was very high. Here's the full game for your reference:

Watching this game proved to be immensely useful because when Ankit reached the following position against GM Himanshu Sharma, he was very clear on what needed to be done. 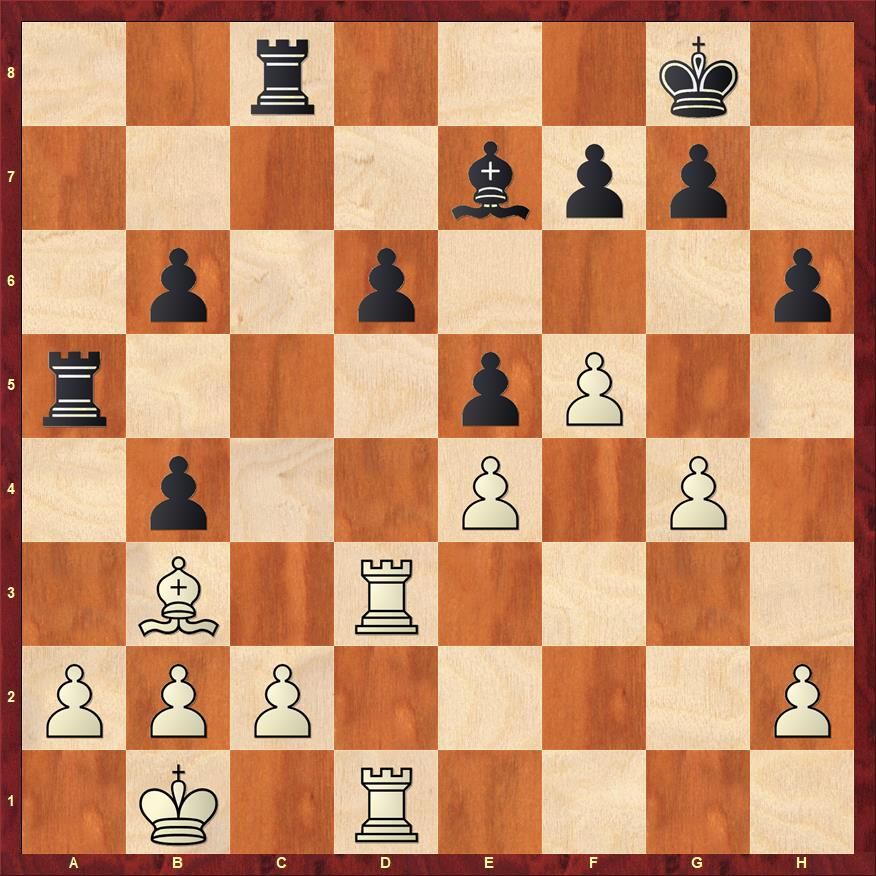 Ankit took the pawn on d6 with his rook and converted the position with ease!

This game shows how even in a clearly better position a GM can go wrong! Ziaur Rahman was clearly better, but once the position was complicated the evaluations went haywire fluctuating from better for white to winning for black nearly every other move. In the end Ankit kept his cool and brought home the bounty with a nice final move. 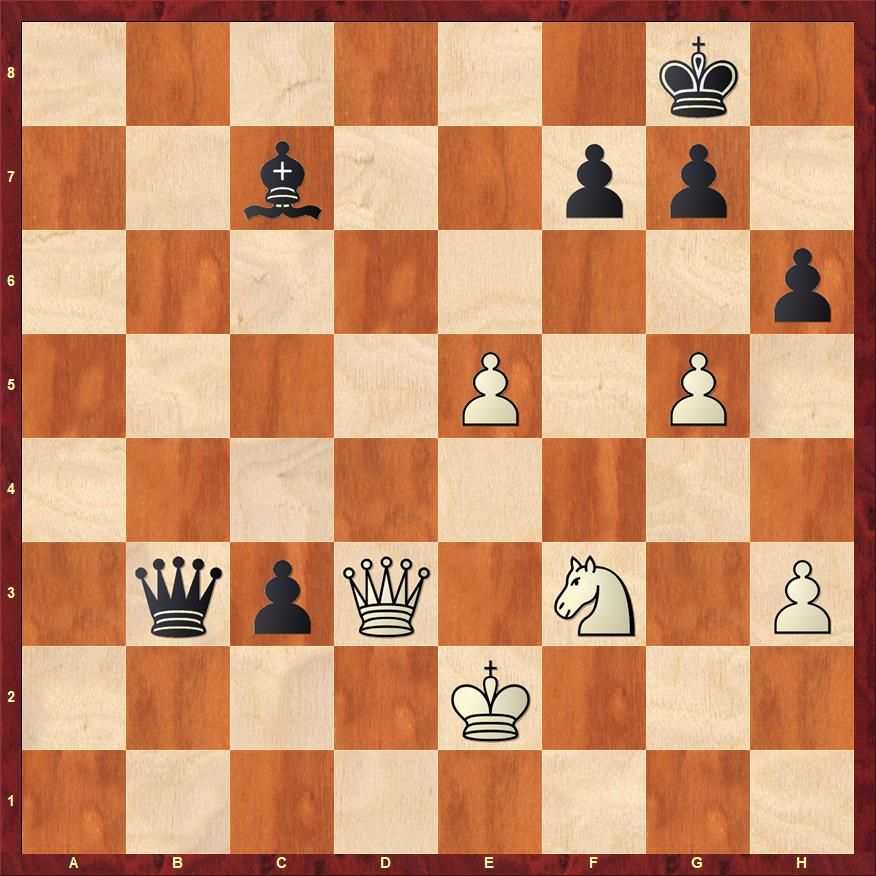 Black is winning in this position but Ankit chose the most beautiful way to convert. Can you find the winning move for Black?

Anuj Shrivatri showed what the right spirit of King's Indian is all about and beat GM Vadim Malakhatko from Belgium | Photo: Sagar Shah 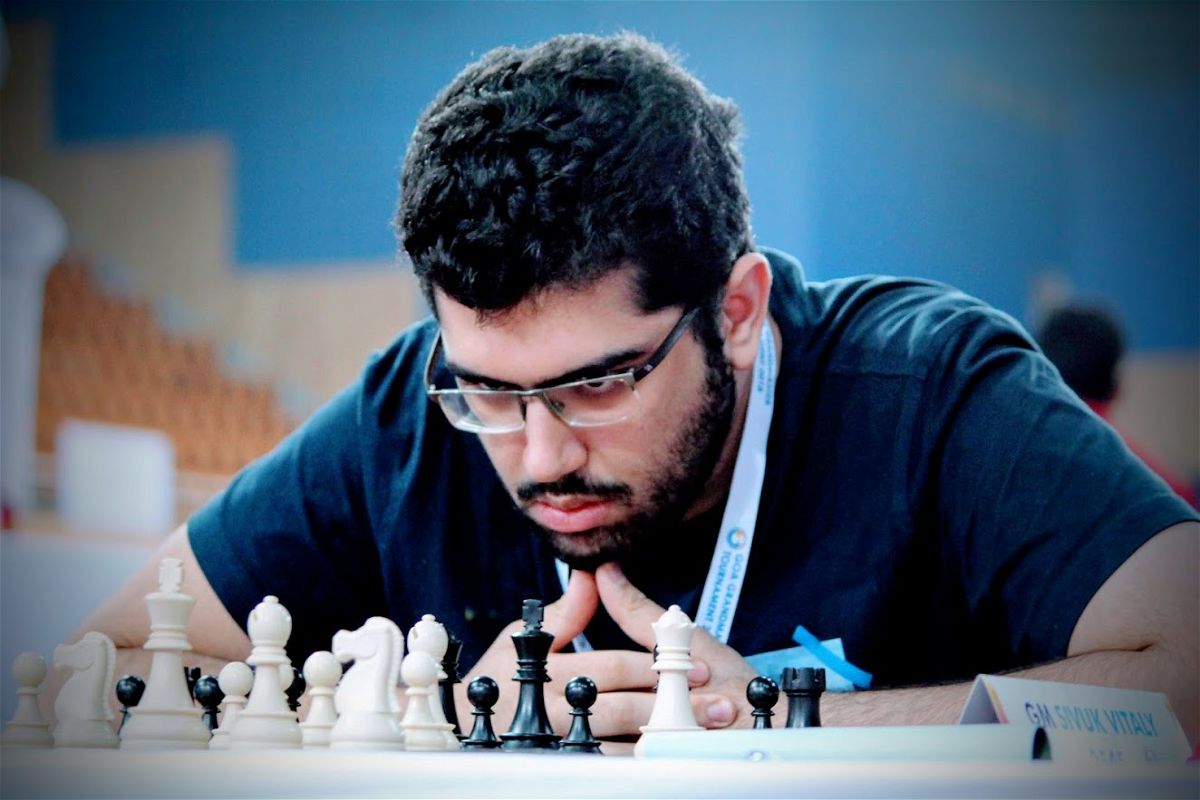 Now that's the level of concentration required to win a tournament in a fierce field like you find in India! | Photo: Amruta Mokal 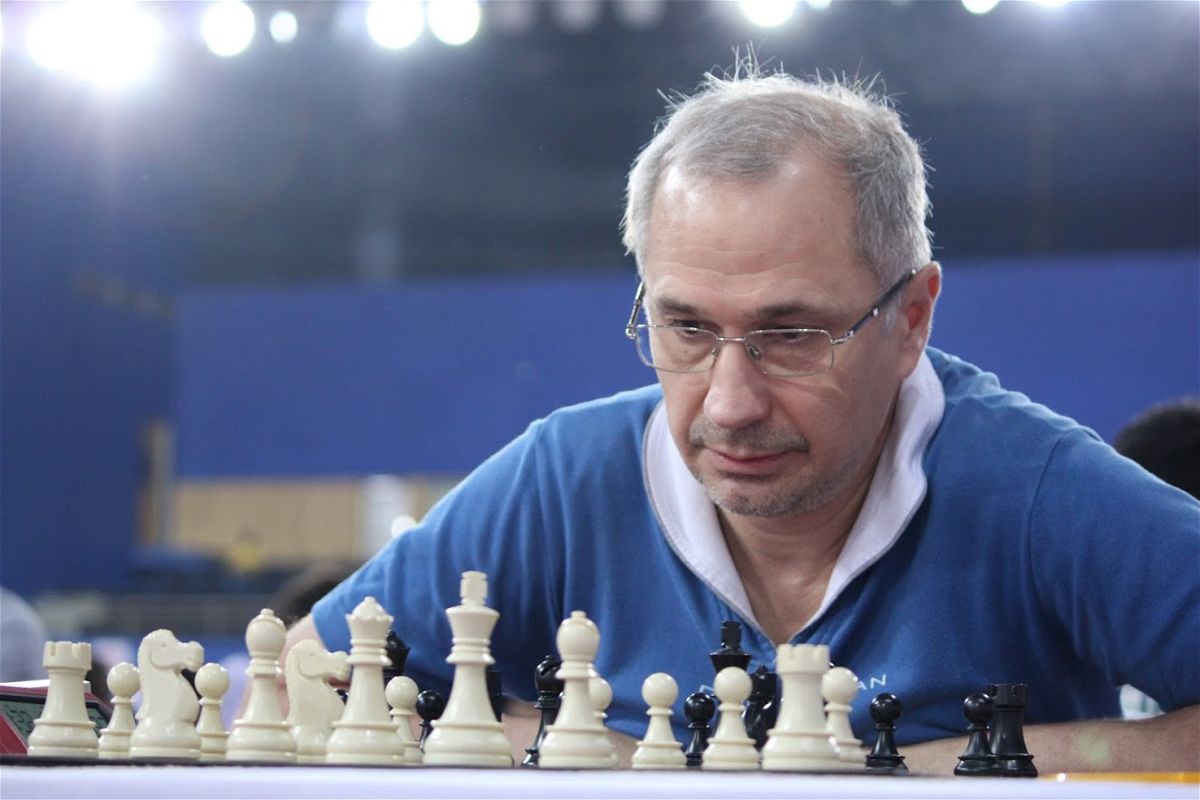 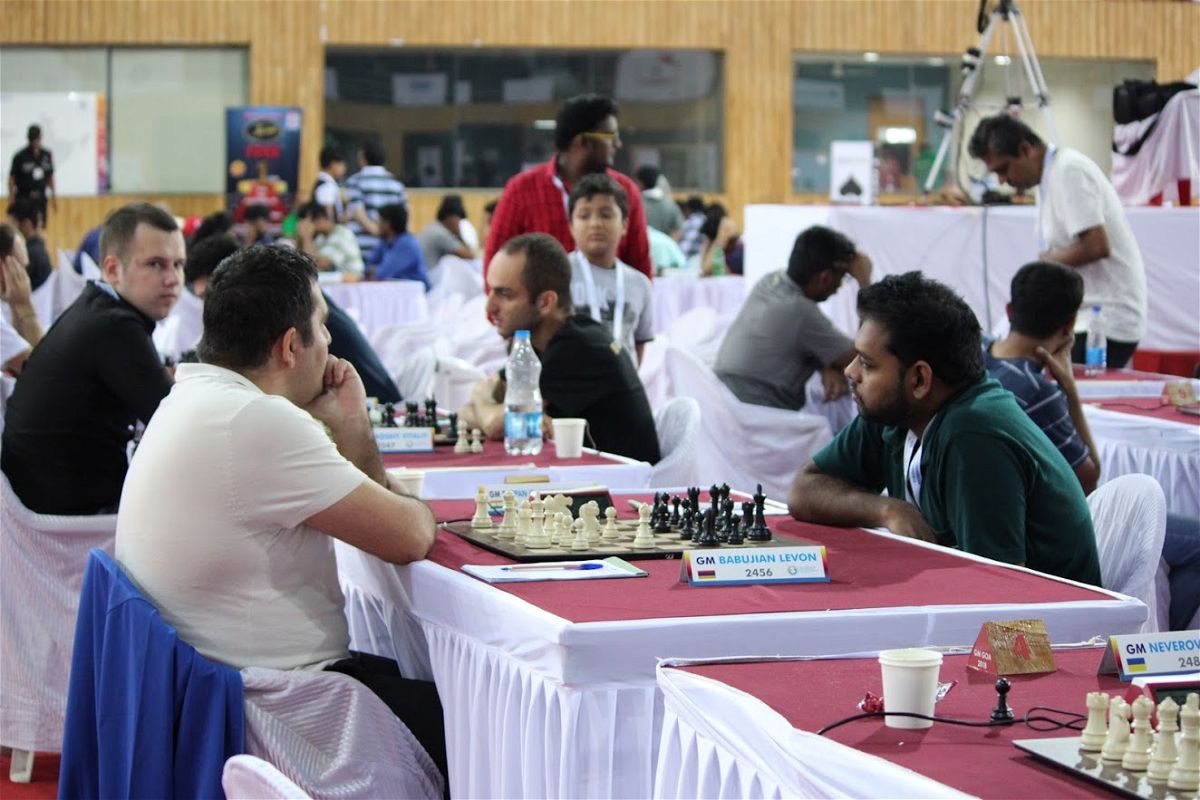 There is something about Deepan that helps him keep his level of play consistent in the most difficult of situations! | Photo: Amruta Mokal 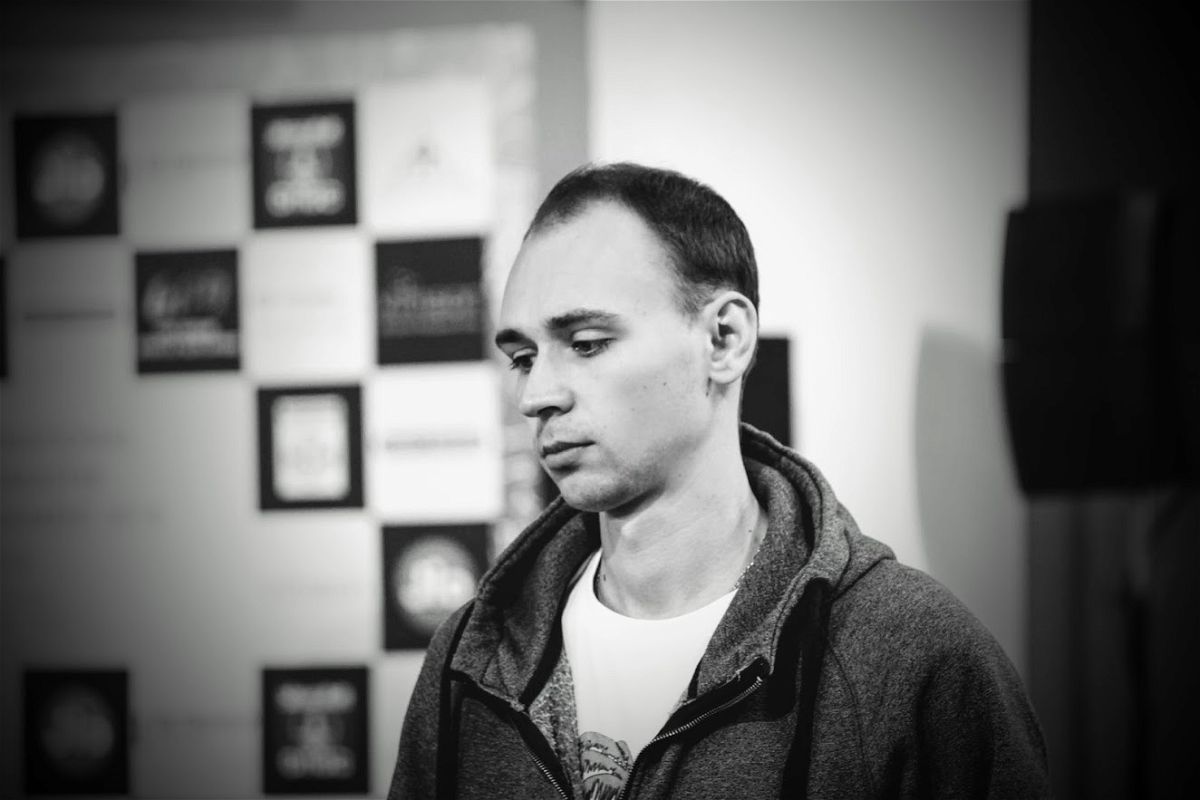 Vitaly Sivuk is one of the joint leaders with 6.0/7 | Photo: Amruta Mokal 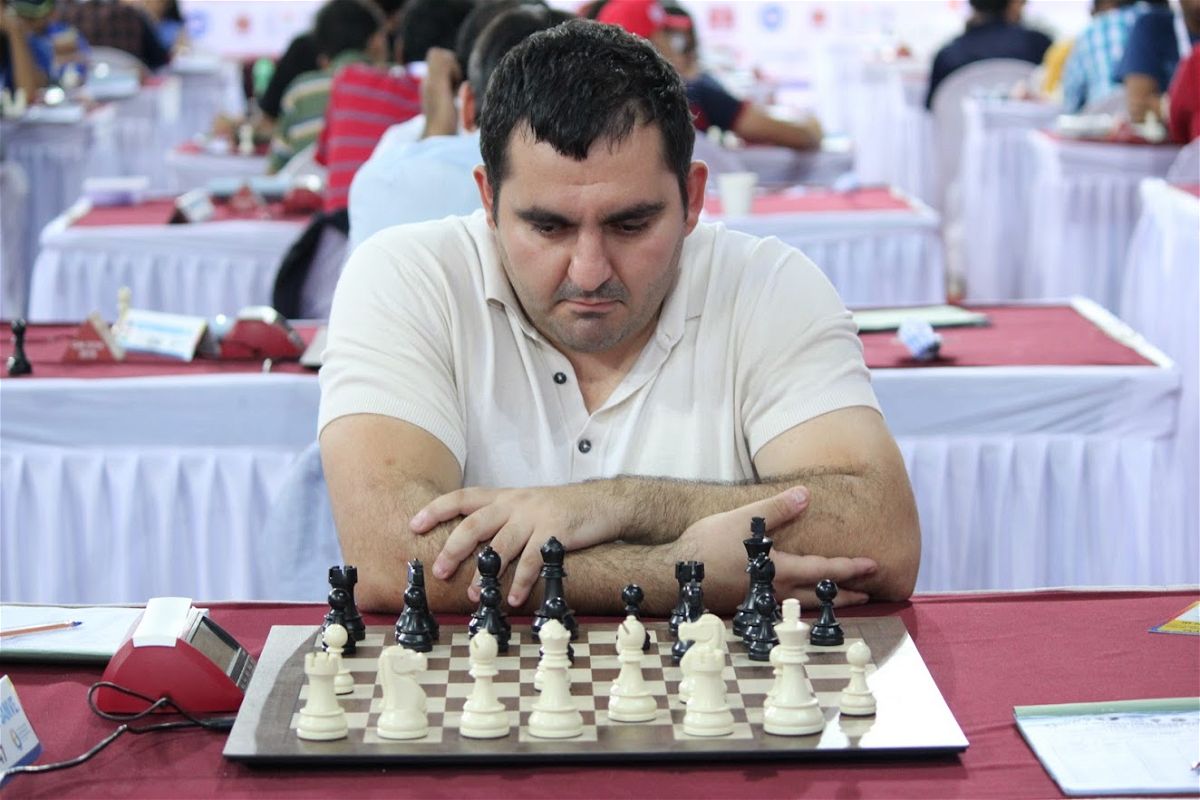 Levon Babujian managed to beat Samvel Ter-Sahakyan in the seventh round and join the leaders with 6.0/7 | Photo: Amruta Mokal 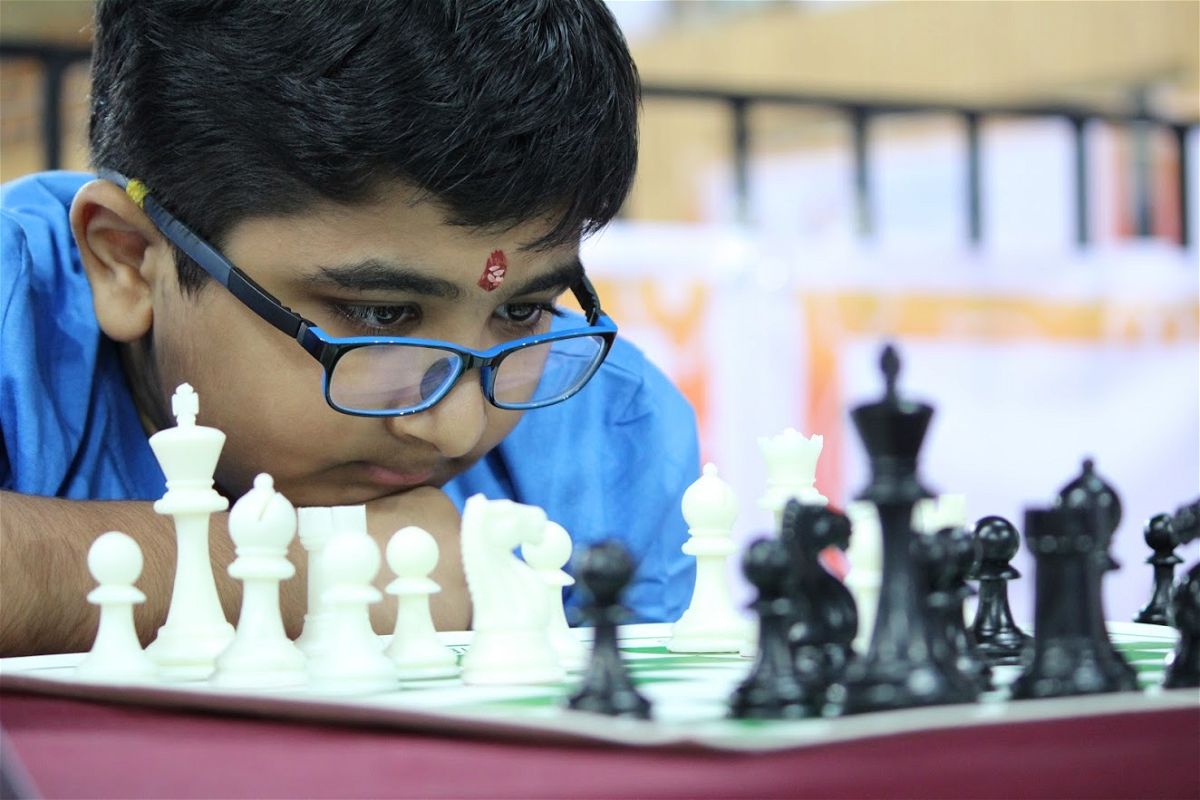 Aditya Mittal started off the tournament with a loss in the first round against an opponent rated 1737. But in the last two rounds he has fought back admirably by beating Anwesh Upadhyay and Rakesh Kumar Jena and is now on 5.5/7. | Photo: Amruta Mokal 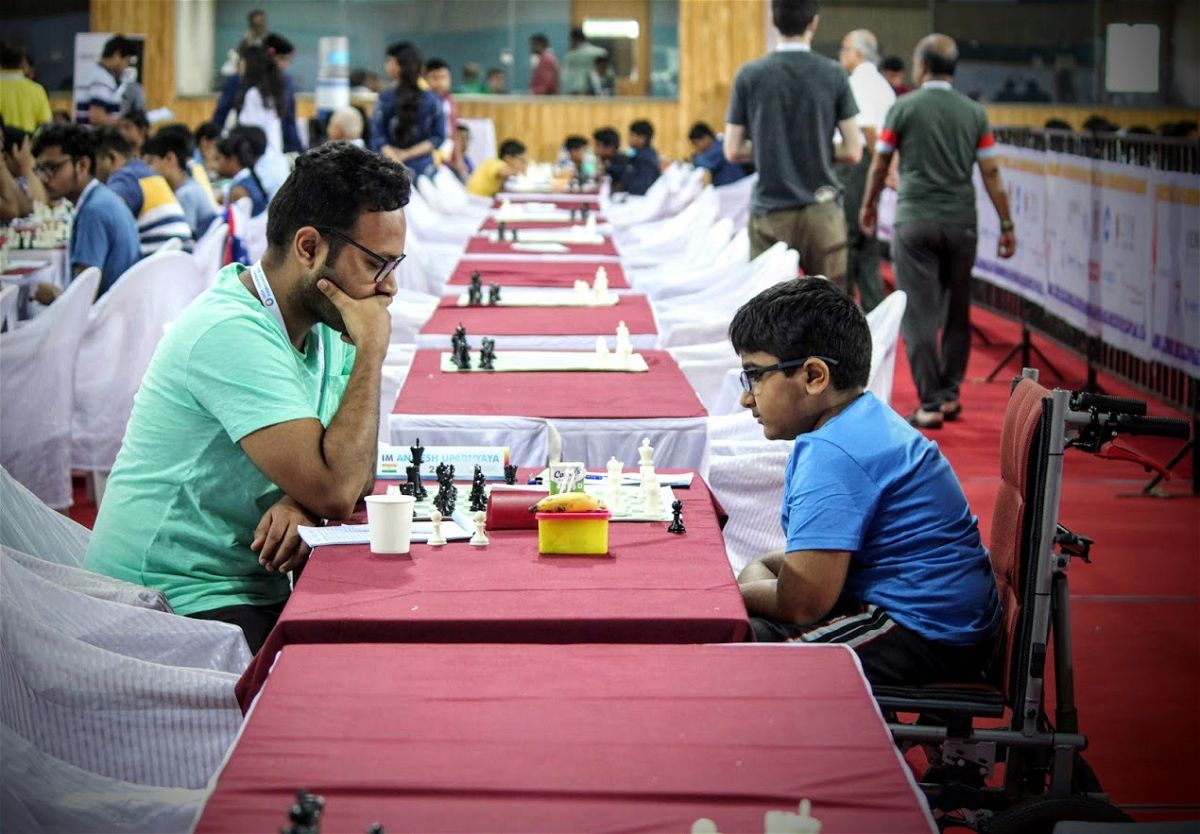 Aditya Mittal had a very bad fall at the under-13 nationals in Ahmedabad a couple of months ago. Due to this he has had to travel in a wheel chair. Of course, not being able to move around would surely affect the young boy, but he has not let that come in between him playing some amazing chess here! | Photo: Amruta Mokal 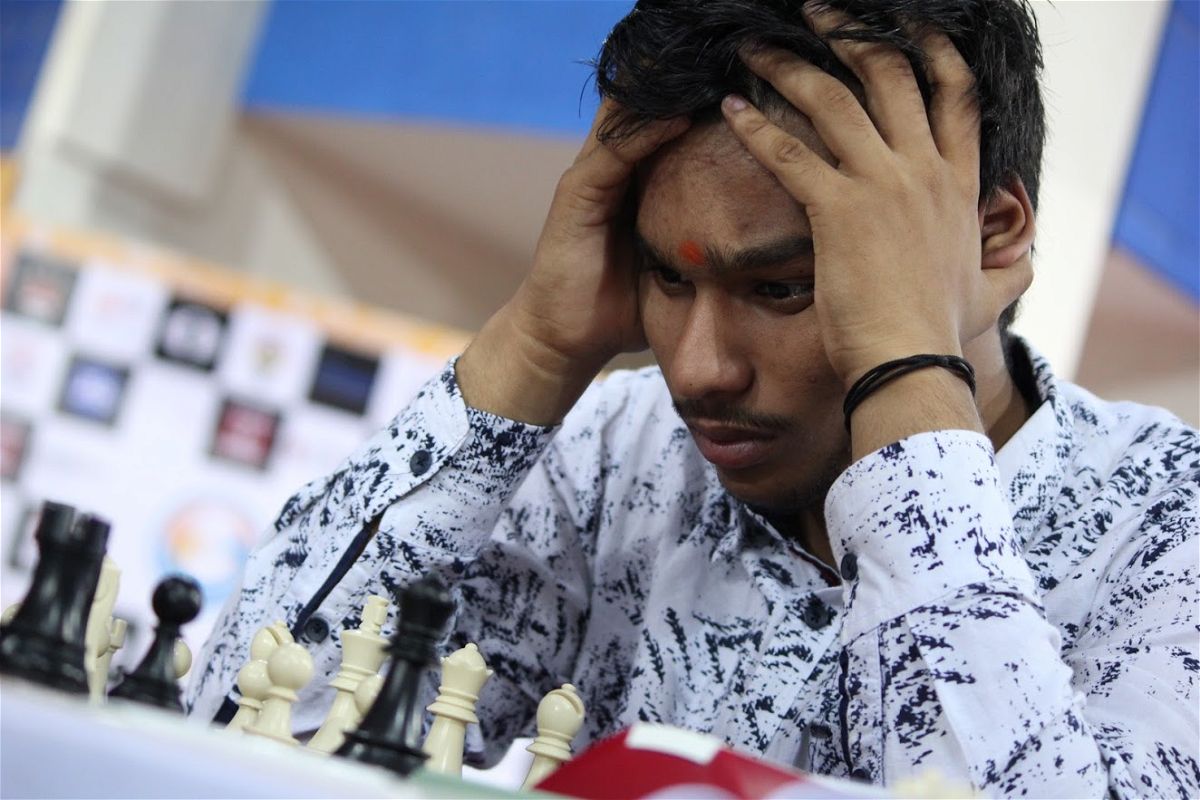 He already has his two IM norms and is well on track for his third one. Raahul VS beat Neelotpal Das and has moved to 5.5/7 | Photo: Amruta Mokal 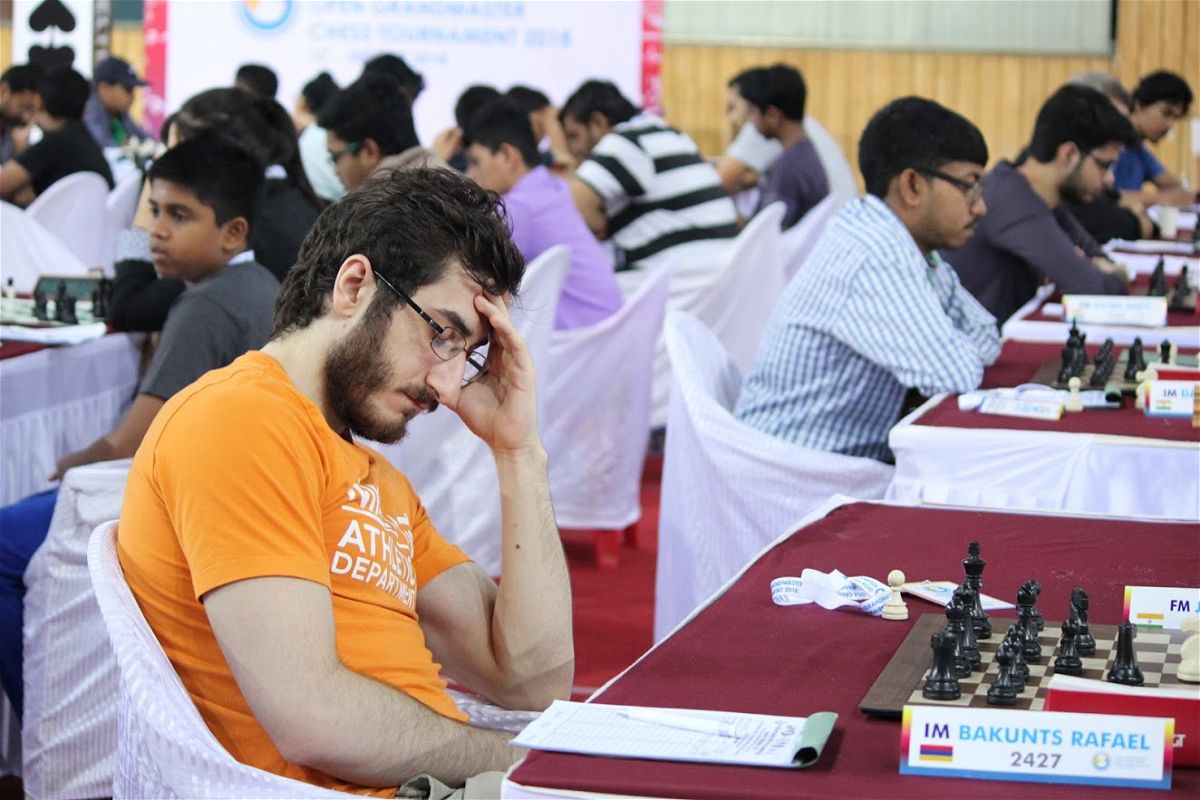 This is the first time that Rafael Bakunts is in India playing tournaments and he is doing well with 5.5/7 | Photo: Amruta Mokal 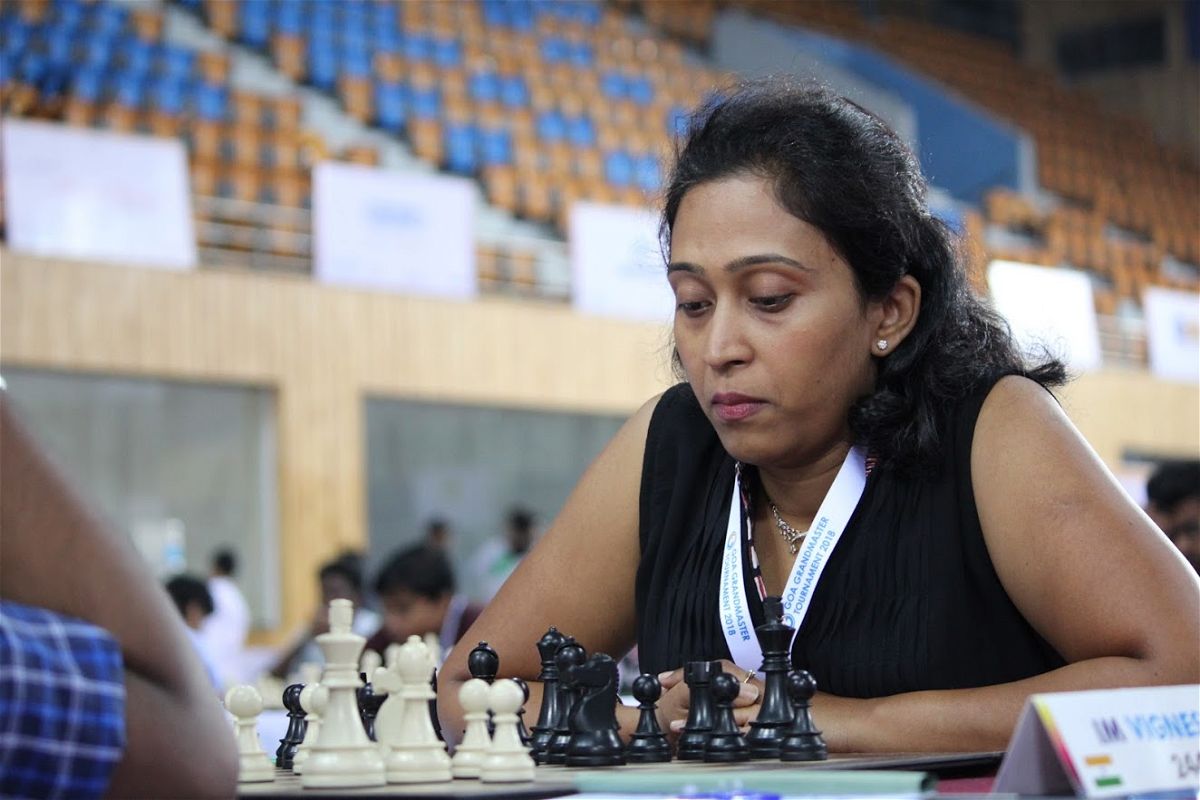 Swati Ghate beat Vignesh NR in the sixth round, but lost to Himal Gusain in the seventh. She is on 4.5/7. | Photo: Amruta Mokal 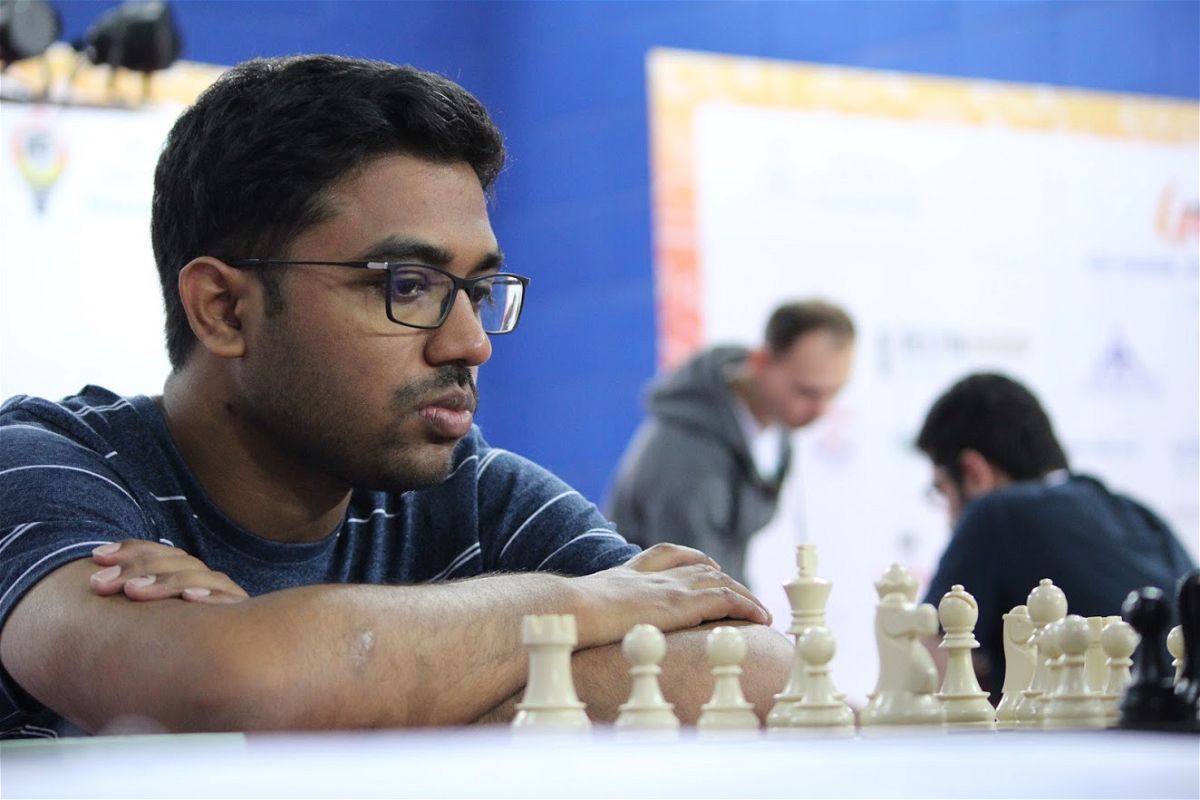 Stany's chances of making his final GM norm here look dim. In last three rounds, he has managed to score only one point. | Photo: Amruta Mokal 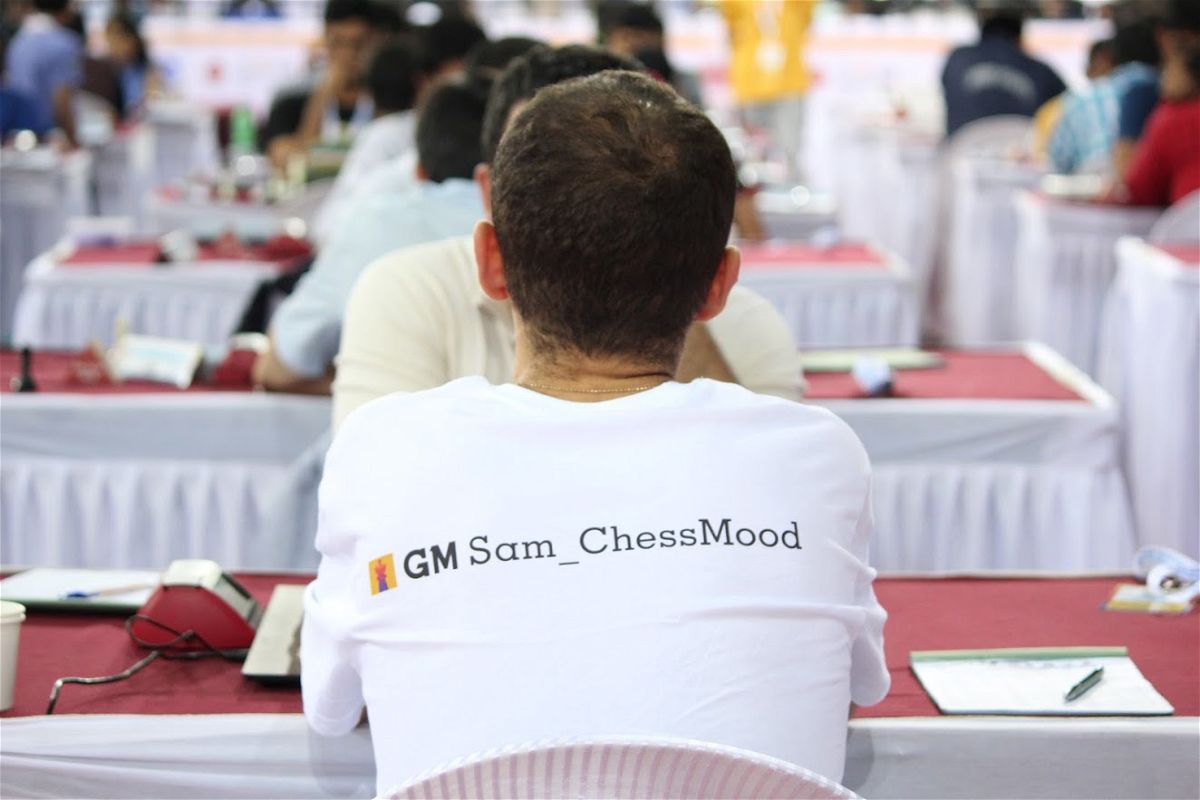 After starting with a perfect 5.0/5 Samvel Ter Sahakyan had a very bad day losing both his rounds. The first one to Bernadskiy and the second one to Levon Babujian | Photo: Amruta Mokal 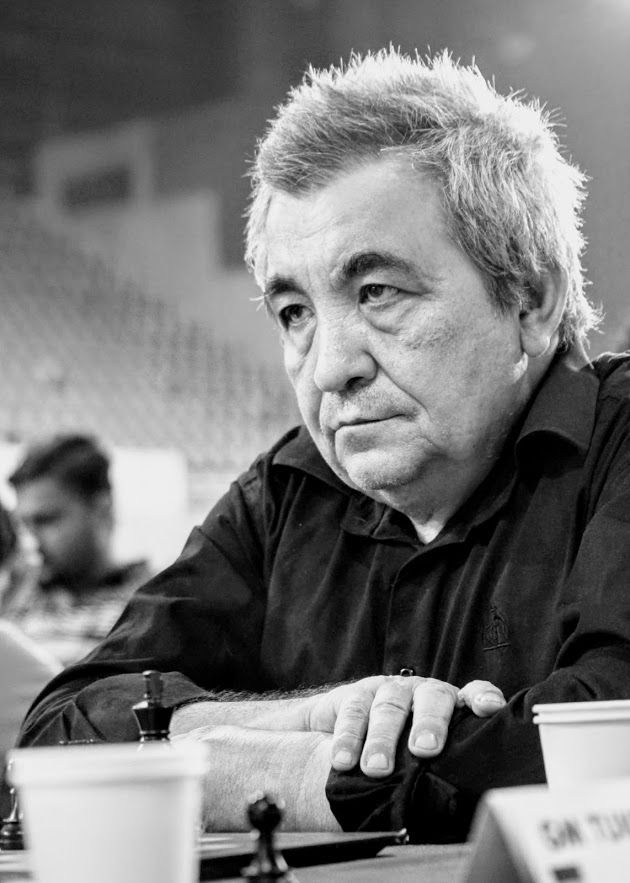 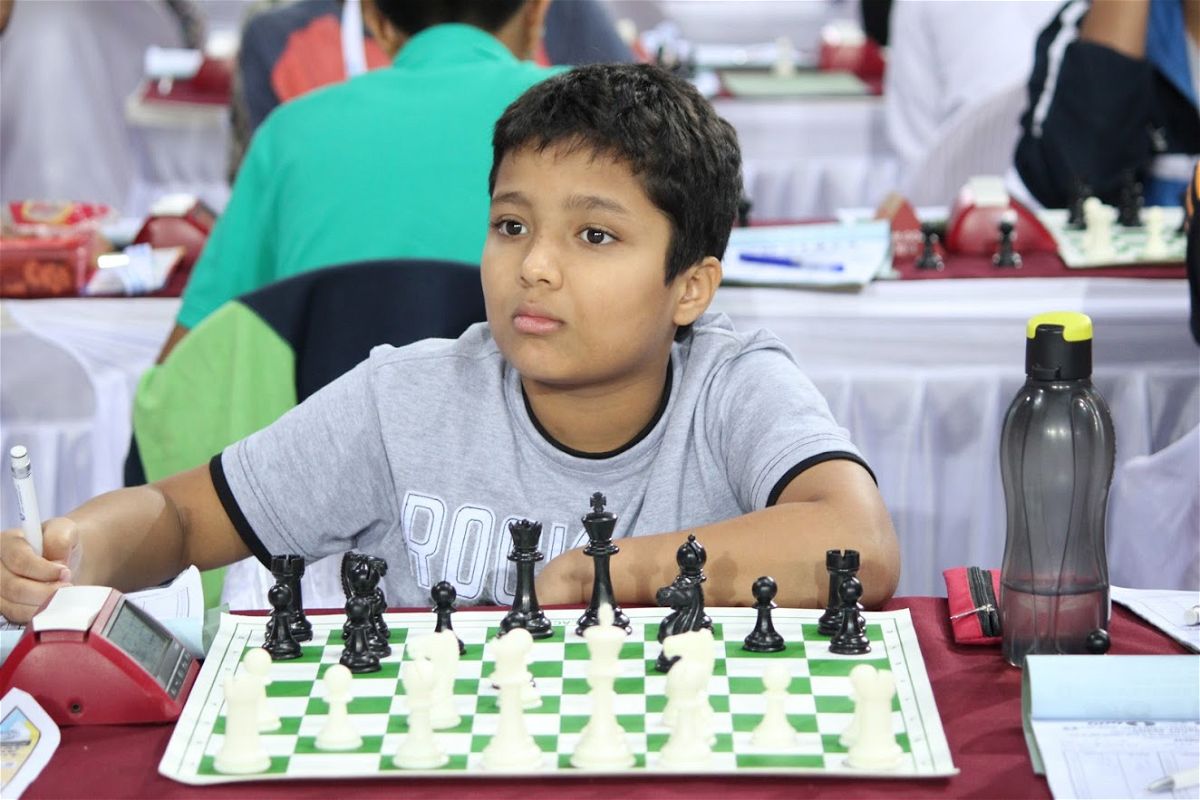 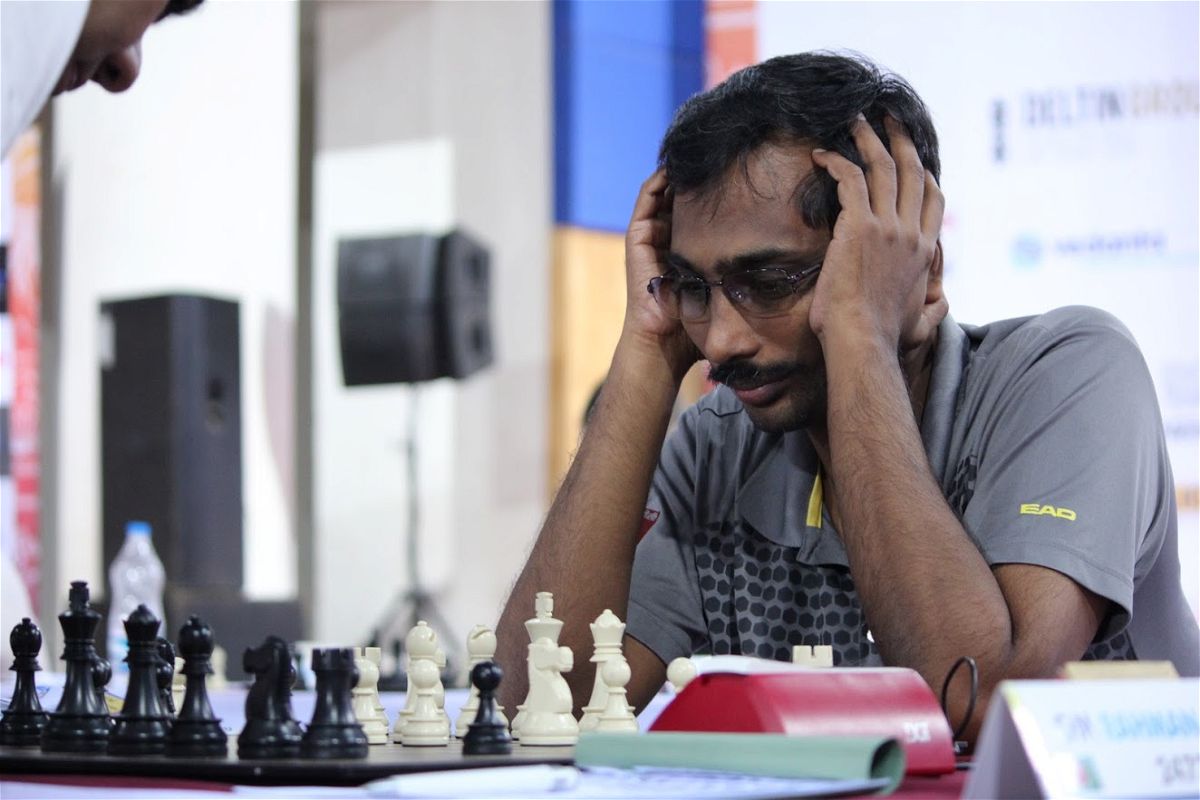 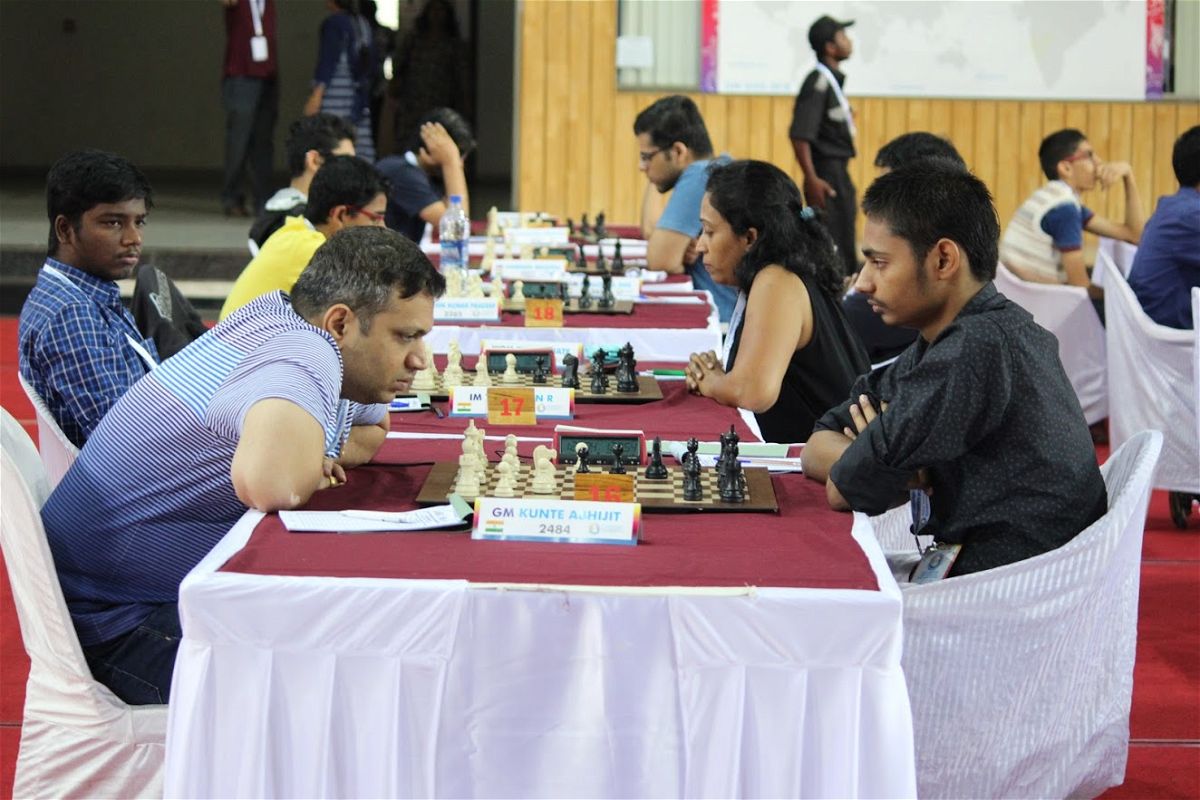 For a player like Abhijit Kunte, such tournaments are not easy. He is on 4.5/7 without a loss - five draws and two wins. But still he is losing 15 precious Elo points. | Photo: Amruta Mokal 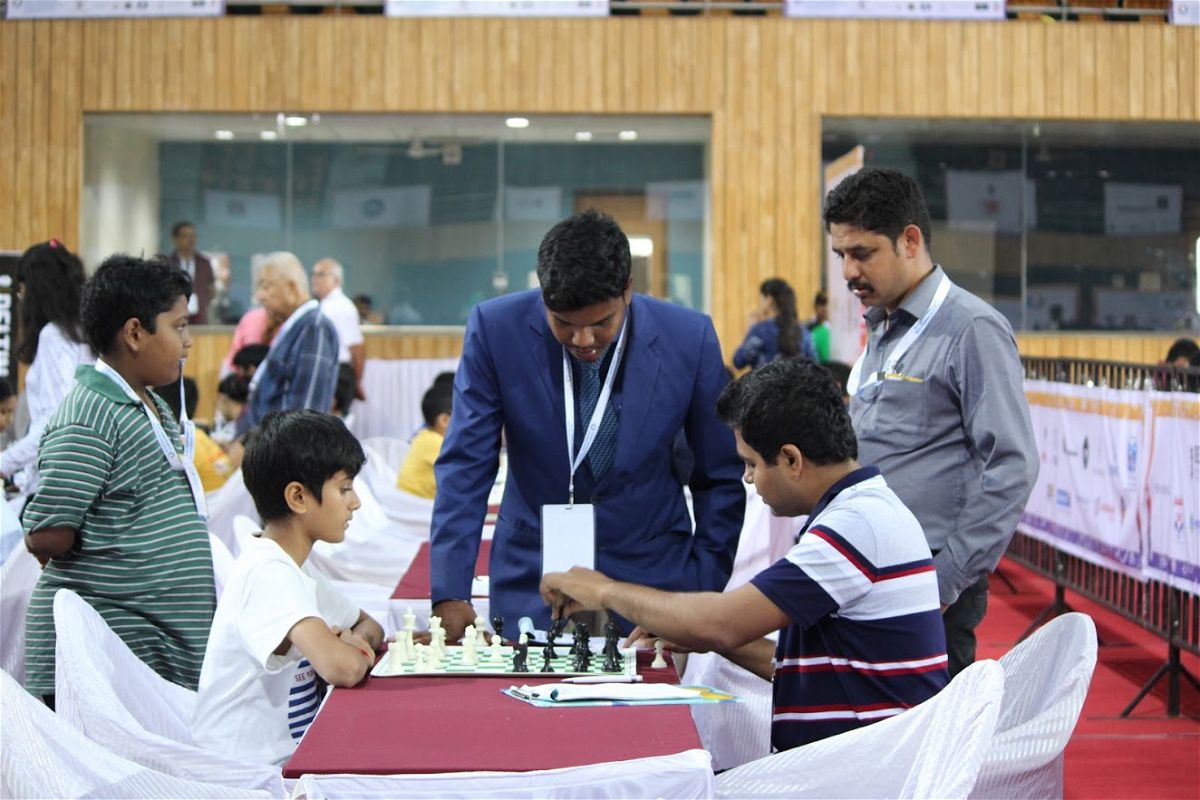 The role of an arbiter is never easy | Photo: Amruta Mokal 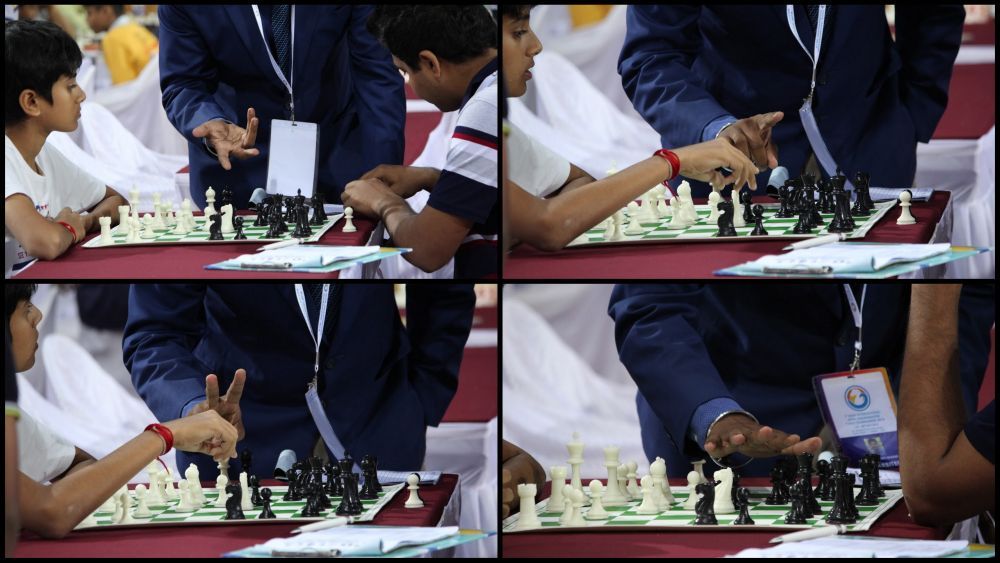 He has to first understand the problem, then try to make the players understand what the rules are and finally give his decision! | Photo: Amruta Mokal 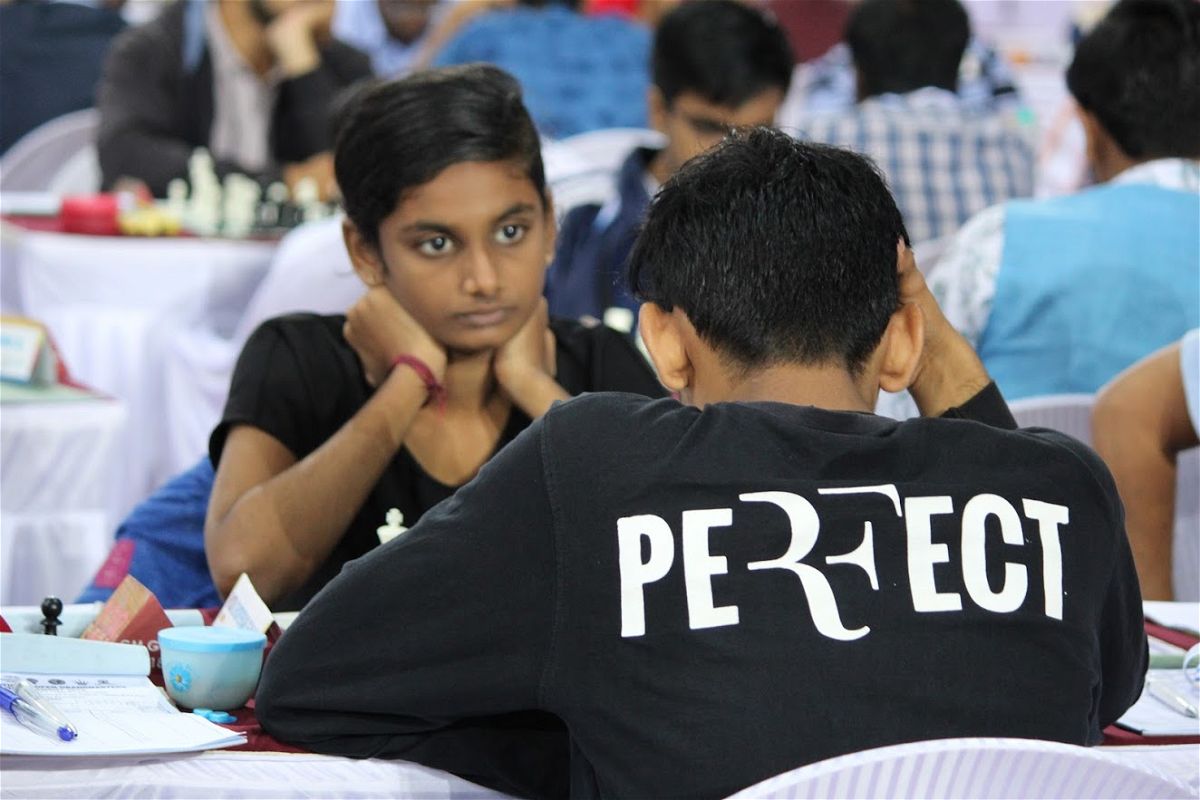 There is a place for perfection in every sport! | Photo: Amruta Mokal 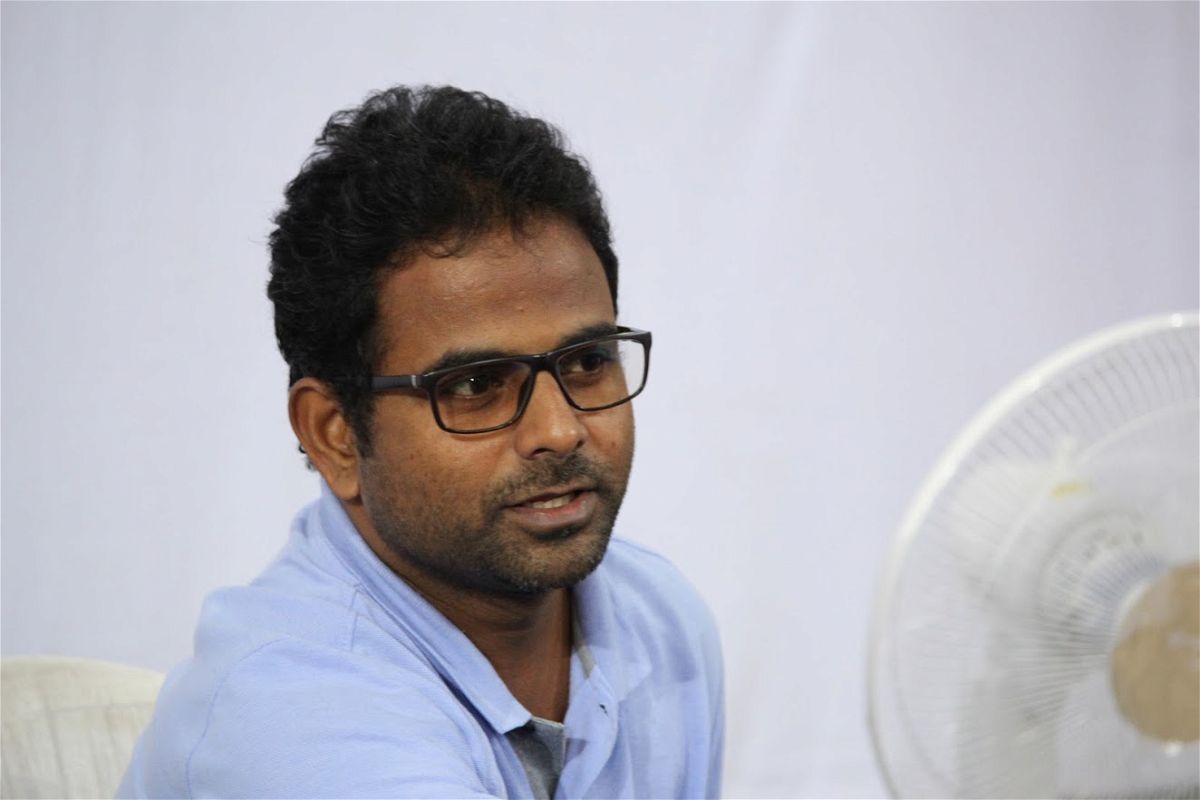 Prabhakar Shet from Ishwari Digital is working towards the live broadcast of the event | Photo: Amruta Mokal 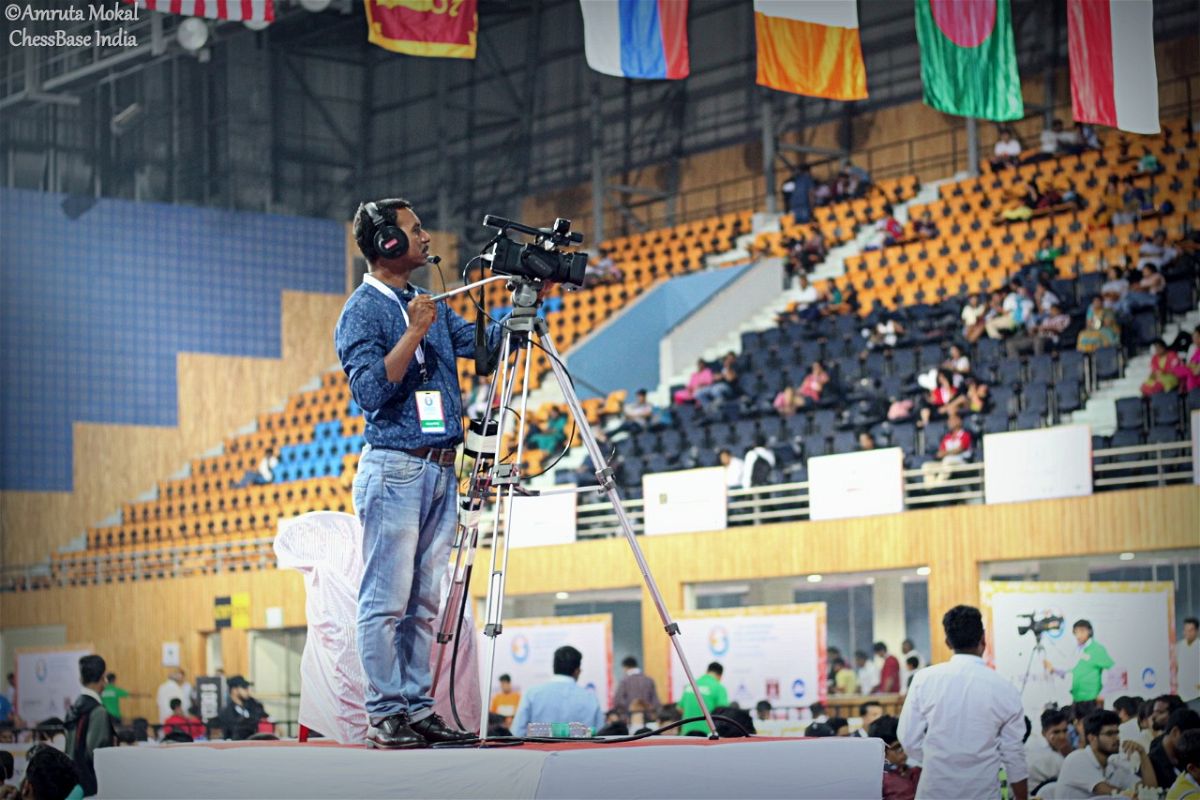 The cameraman who is working hard to show the scenes of the tournament live to the audience on Facebook and YouTube. | Photo: Amruta Mokal
Live Commentary from round 7 with not just the live feed from the commentator and 2D board, but also the live video feed from the venue! 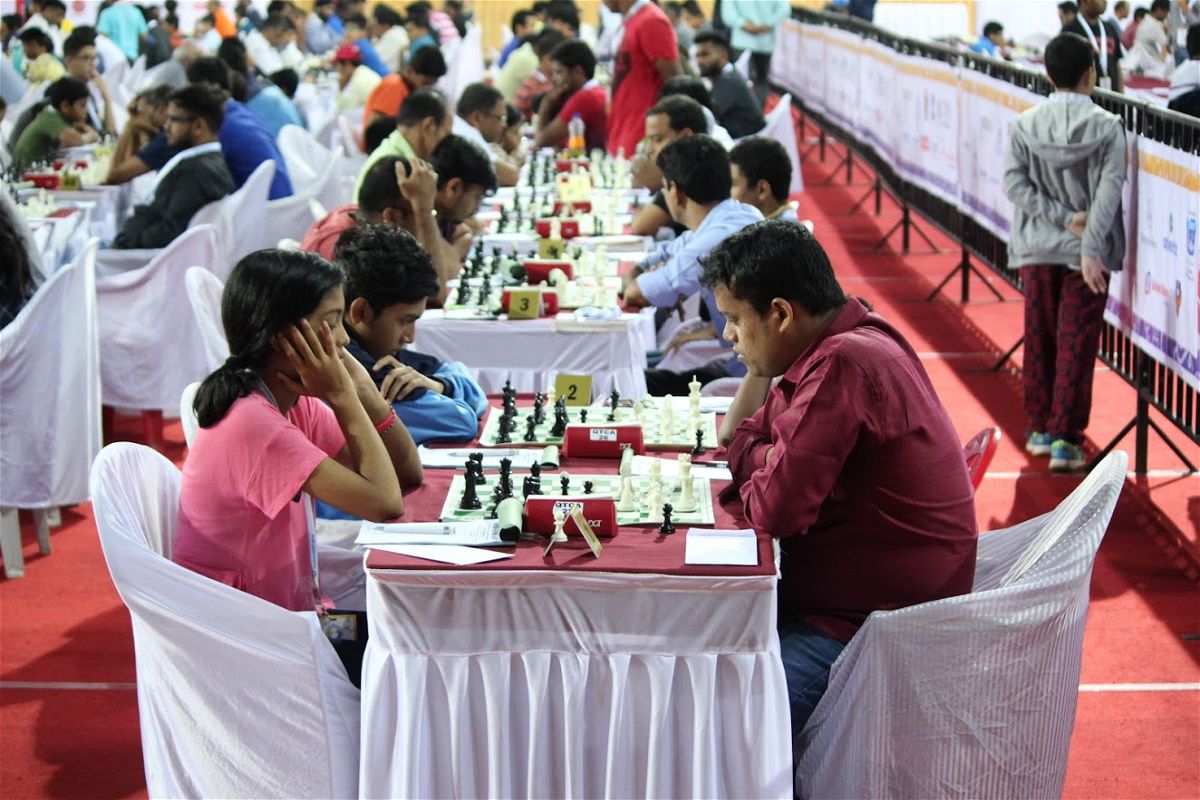 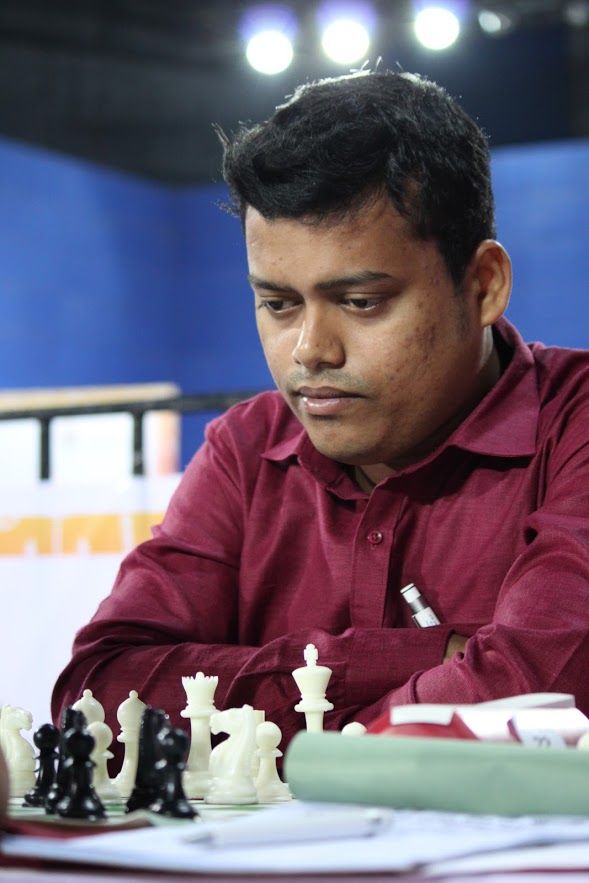 Soumen Mondal of West Bengal is the top seed in Group C with a rating of 1593. | Photo: Amruta Mokal