Manuel Petrosyan played the opening like a book, middlegame like a machine and didn't let the endgame occur! He beat GM P. Iniyan in their top board clash and became the sole leader of the tournament with 7.0/8. Judging by Manuel's form it seems like he is all set to win the tournament with two rounds to go. But there are four more players trailing him by just half a point - Iturrizaga, Jojua, Paichadze and Rahman. No Indian player is in top 8 after 9 rounds. Currently the best performing one is Neelash Saha, who is on 6.0/8. In this article we look at some of the most critical games of round 8 and also tell you about the leaders in the below 1600 (C-group).

At the end of seven rounds of the Goa GM 2019 we had three leaders. Iniyan was paired on the top board against Manuel Petrosyan and Ter Sahakyan Samvel, the third leader, was going to fight it out on board two against Eduardo Itturizaga. A lot was expected from Iniyan on the top board. However, the GM from Erode, was not his usual confident self in the opening. He was quite circumspect and that helped Petrosyan build up quite a commanding position. A further error from Iniyan made sure that the game was beyond salvation. 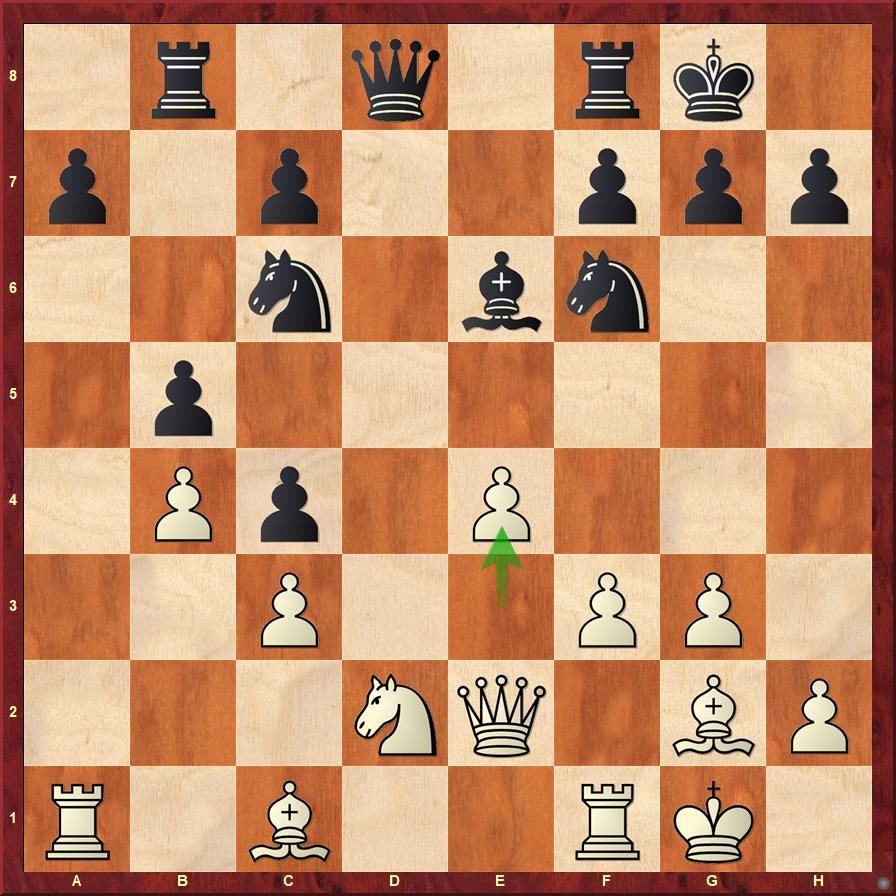 White's last move was e3-e4. Looks natural, doesn't it. Do you see why it is an error? 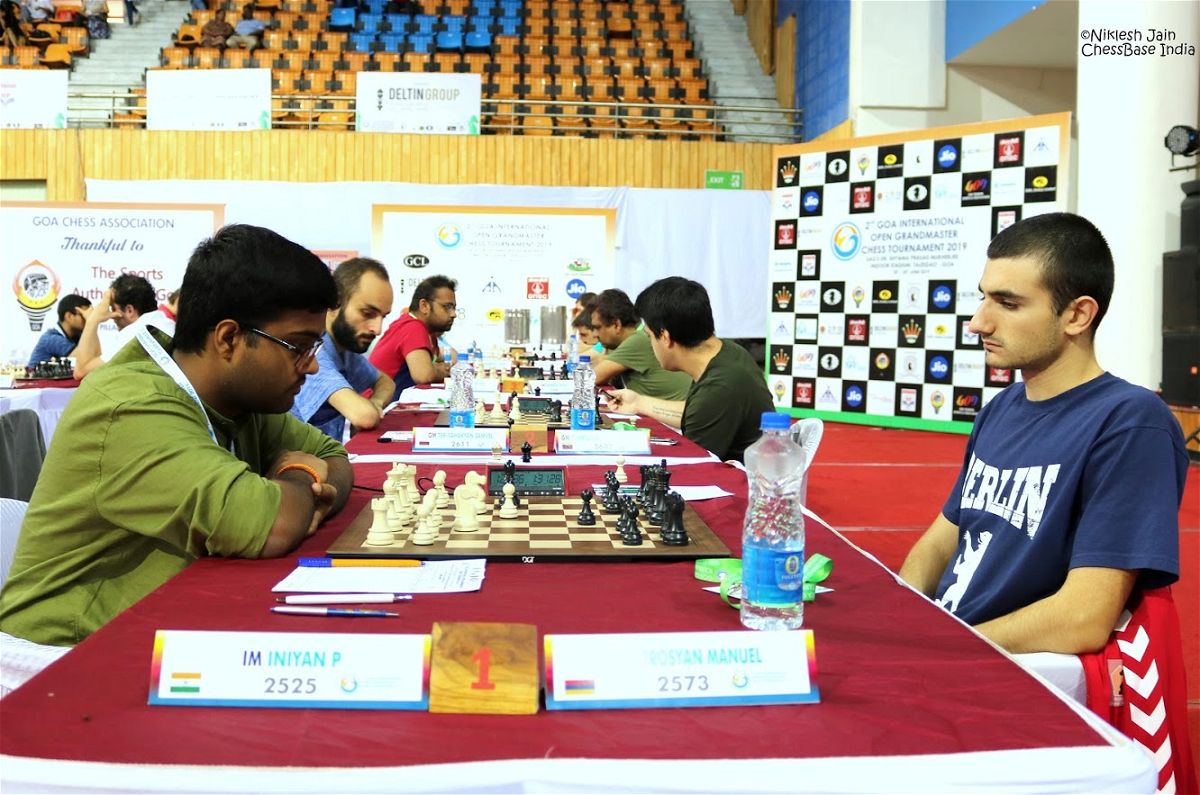 The battle between two talents of India and Armenia was won by Petrosyan | Photo: Niklesh Jain

Petrosyan was extremely alert and simply picked up the b4 pawn. After ...Nxb4 cxb4 was impossible due to Qd4+. Also the knight from b4 was jumping to d3. Black won the game easily, but you must look at Petrosyan's technique. It was simply flawless. 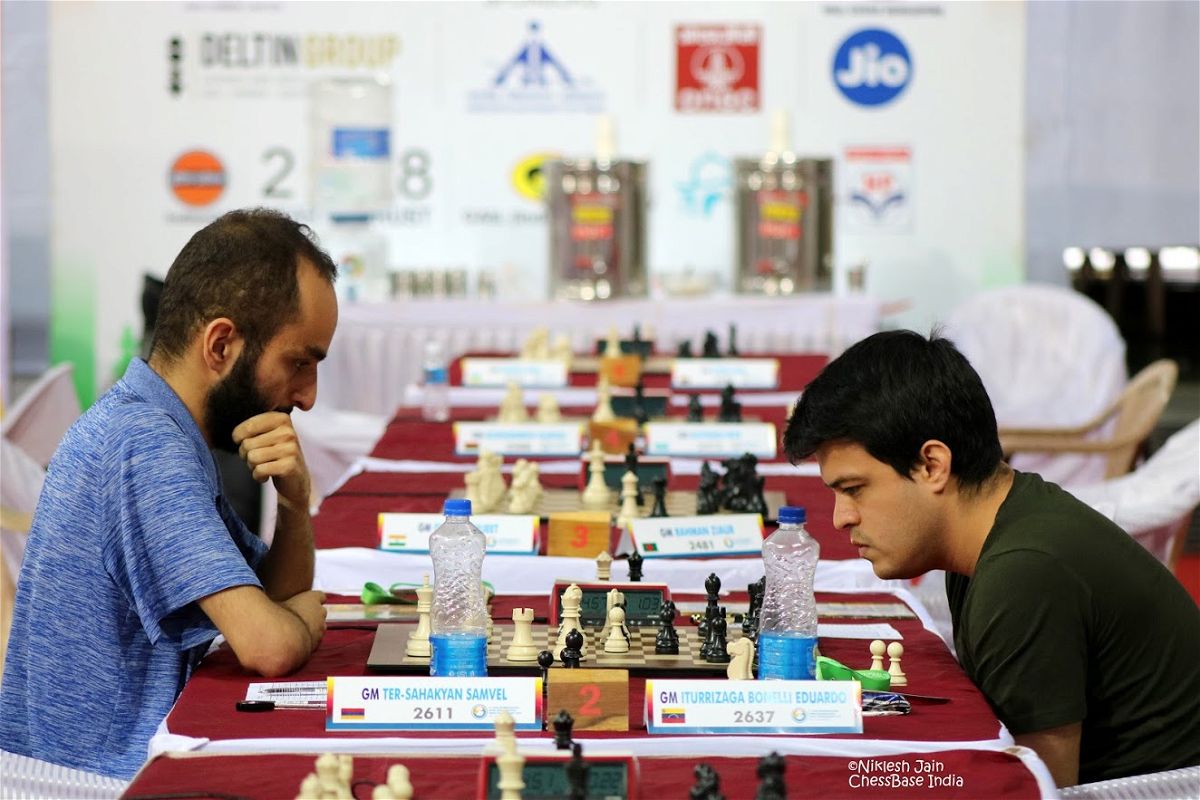 The most tense encounter of round 8 was definitely Samvel Ter Sahakyan vs Eduardo Iturrizaga | Photo: Niklesh Jain

Iturrizaga's experience has taught him how to play chess when he is in a must-win situation. He was trailing the leaders by half a point and he had the black pieces. And so he decided to go for the provocative Sicilian Kan. As Iturrizaga said after the game, "I had to win the game, and hence had to take some risk." White's position soon grew quite menacing and it seemed like Samvel would win the game. But Iturrizaga held tight. If the Armenian had gone for a positional edge, he would have been better, but he wanted to finish off his opponent with a mating attack. That's where things began to go wrong and Iturrizaga fought back to win the game.

The final moments of the game captured on the camera 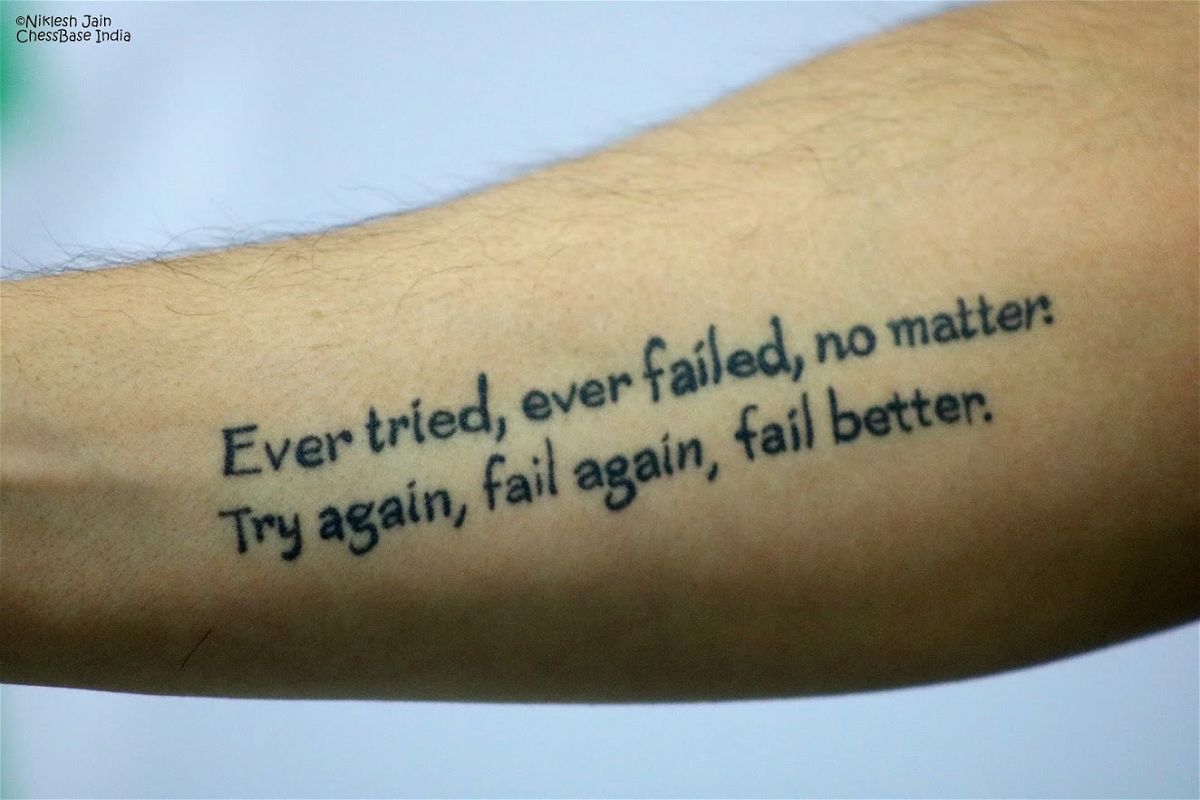 Itturizaga's tattoo! Wise words for everyone to learn from! | Photo: Niklesh Jain 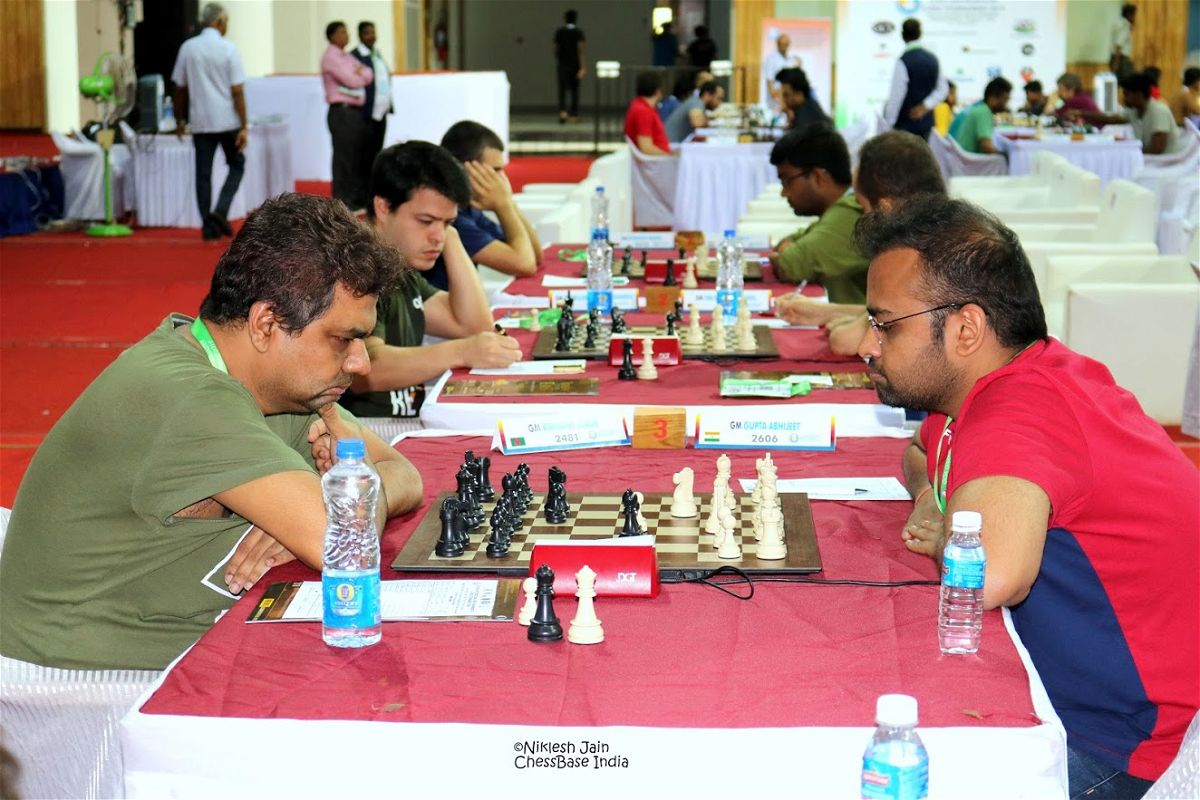 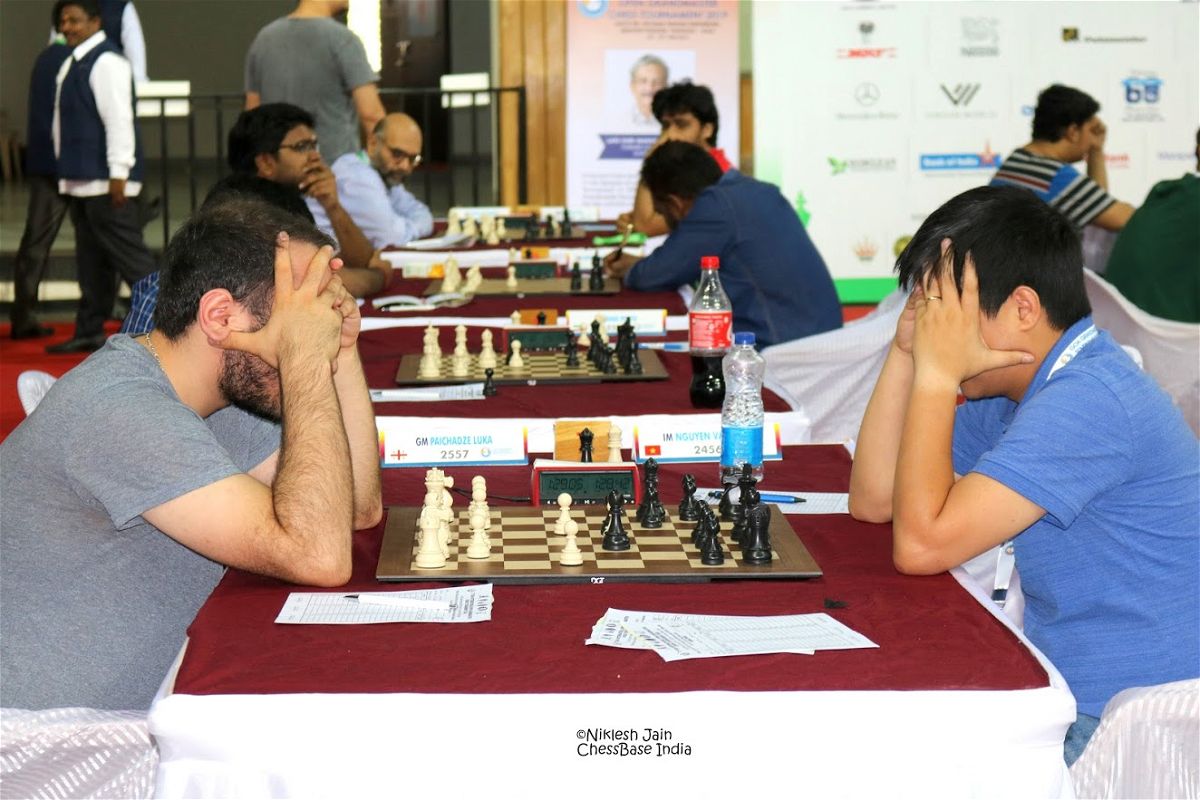 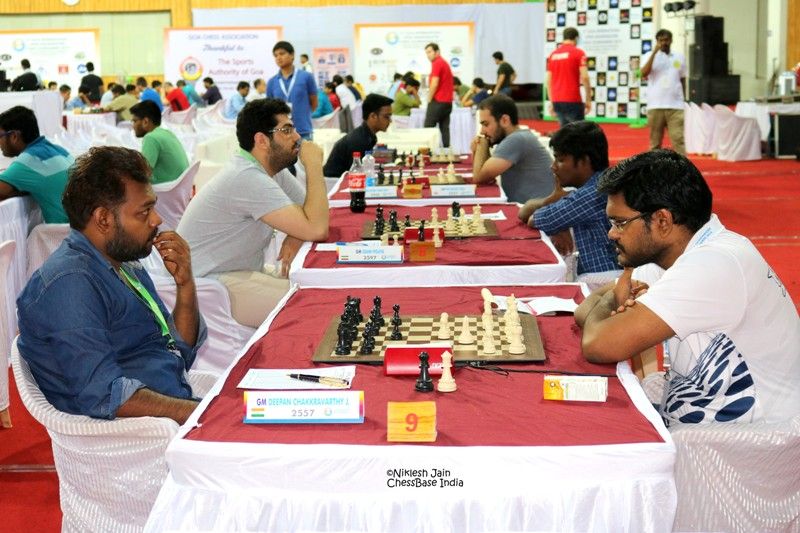 Deepan Chakkravarthy lose his game to P. Shyaamnikhil. Shyaamnikhil needs only one GM norm to become the latest GM of our country as he has already surpassed the 2500 Elo barrier in the past | Photo: Niklesh Jain 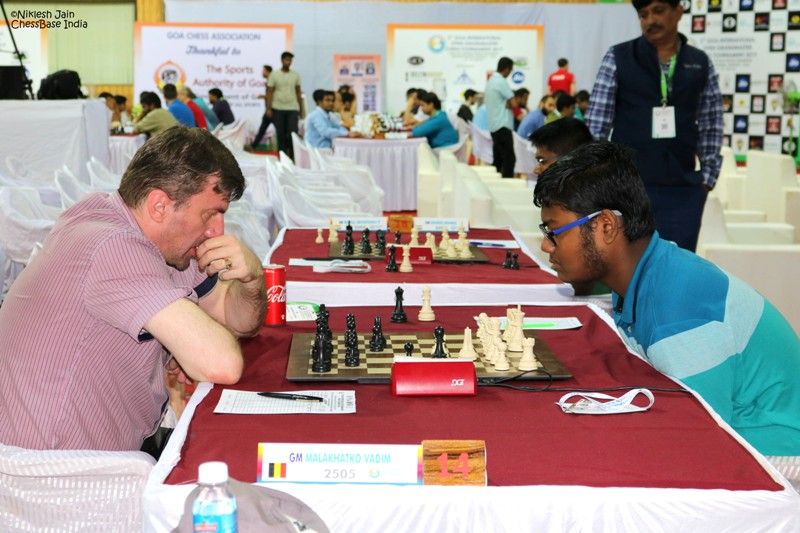 IM Neelash Saha played an inspired game of chess and managed to get the better of GM Vadim Malakhatko | Photo: Niklesh Jain 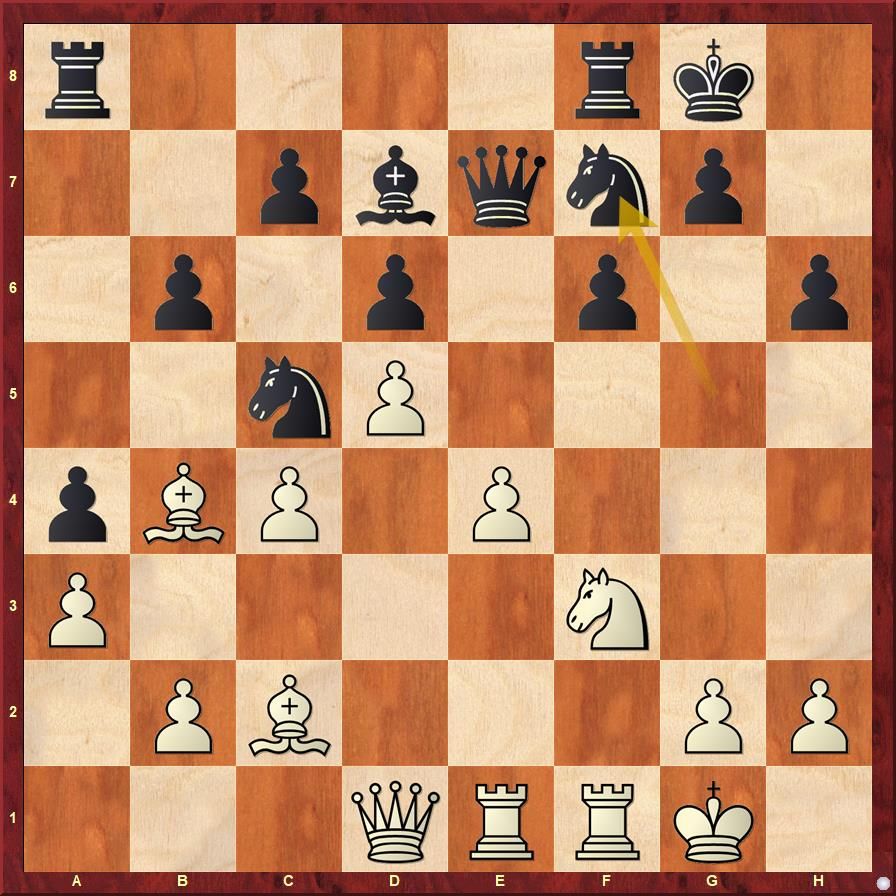 Black has just played his knight to f7. What did Neelash play?

Black is threatening to block the e5 square with his knight. And hence Neelash just played e4-e5! sacrificing the pawn and opening up his bishop on c2! The game was quite complex, but Neelash managed to win. 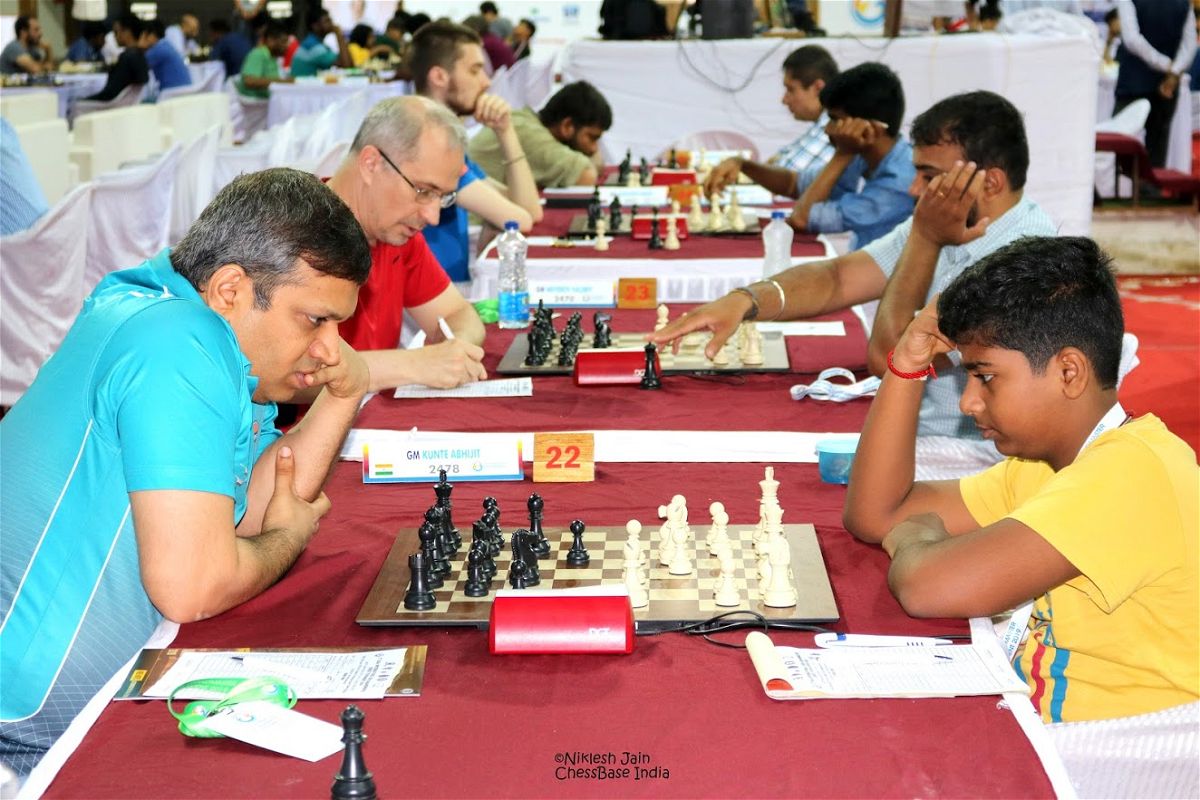 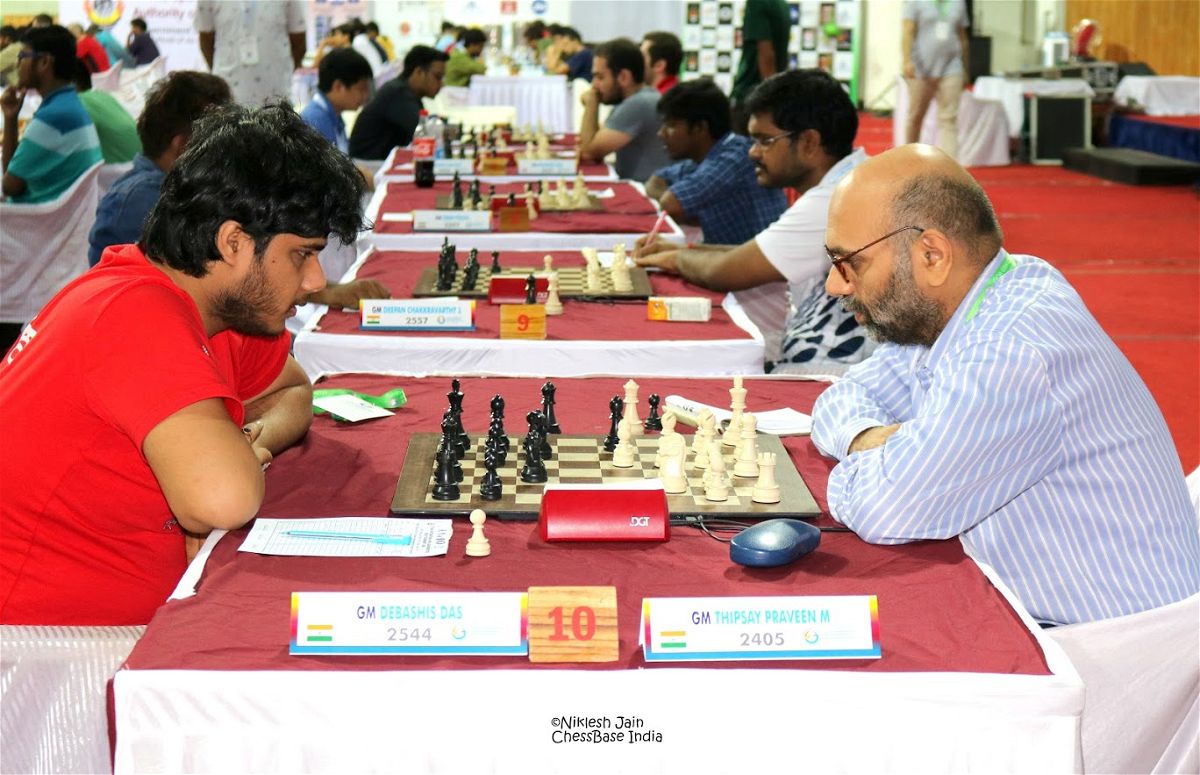 Debashis Das played the Sicilian Dragon for the first time in his chess career and beat GM Pravin Thipsay | Photo: Niklesh Jain
Debashis Das speaks about his win against Thipsay and how he worked hard to prepare the Dragon 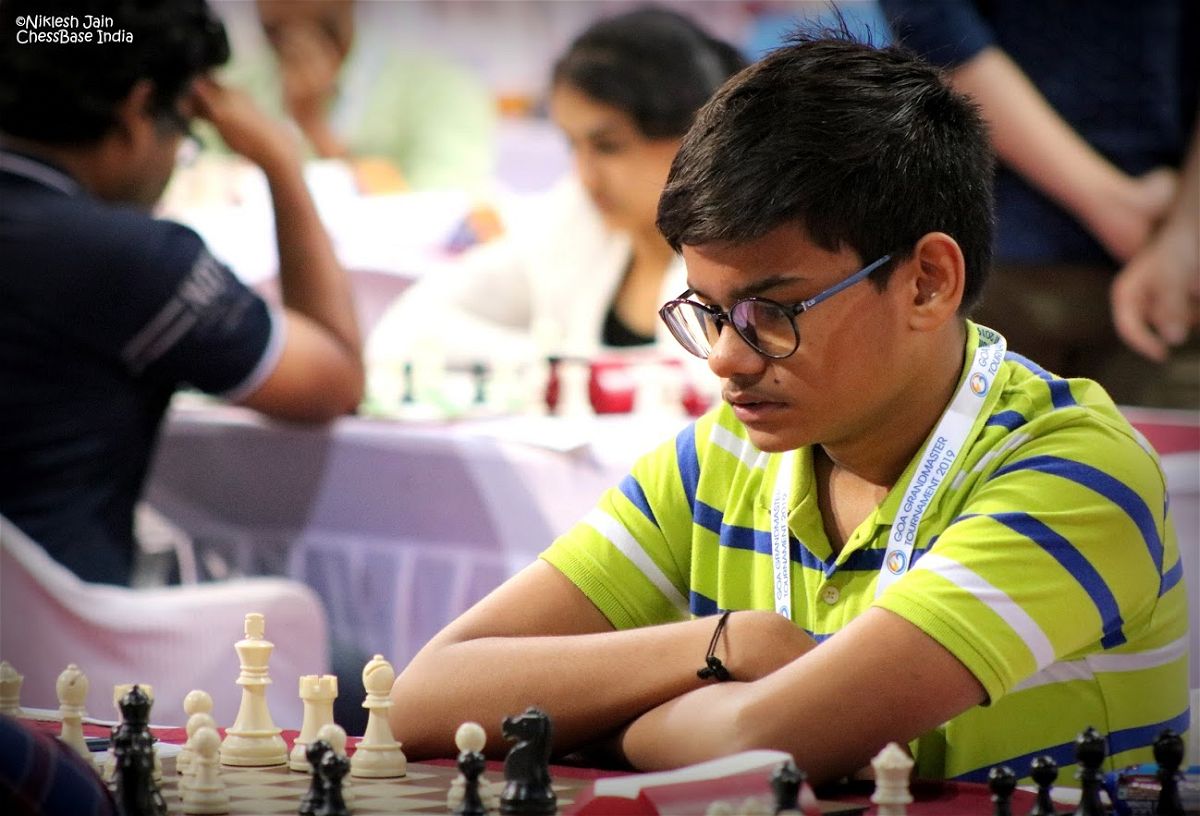 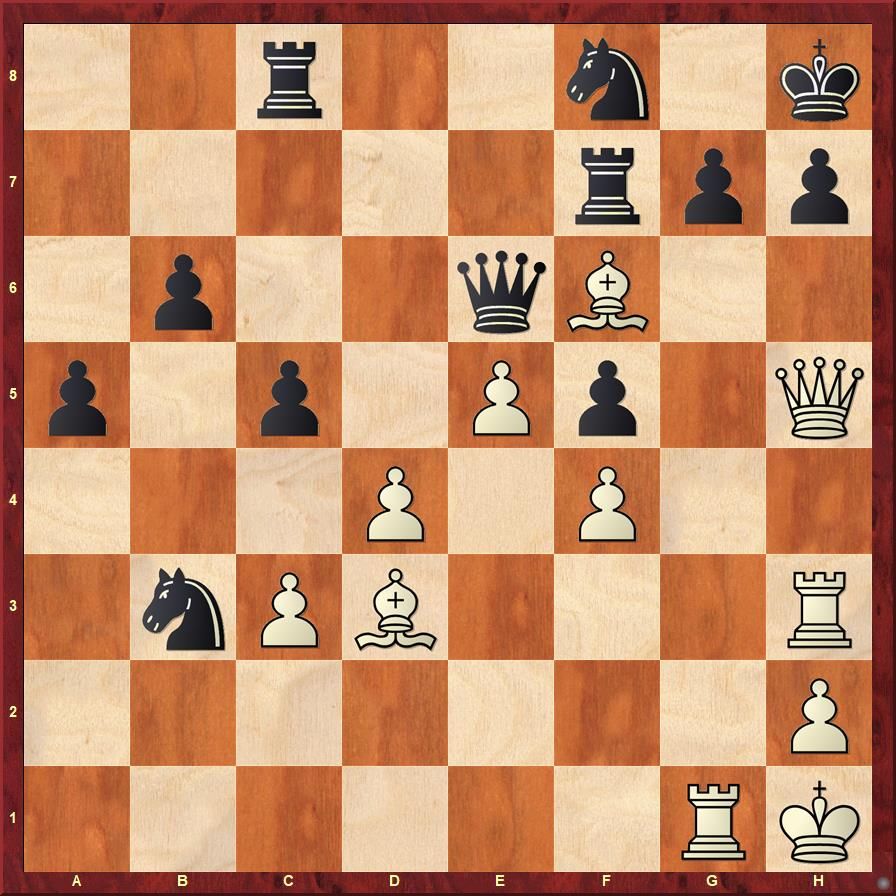 White has just played his bishop to f6. Venkatesh took the bishop with gxf6. Do you see how you can win the game? 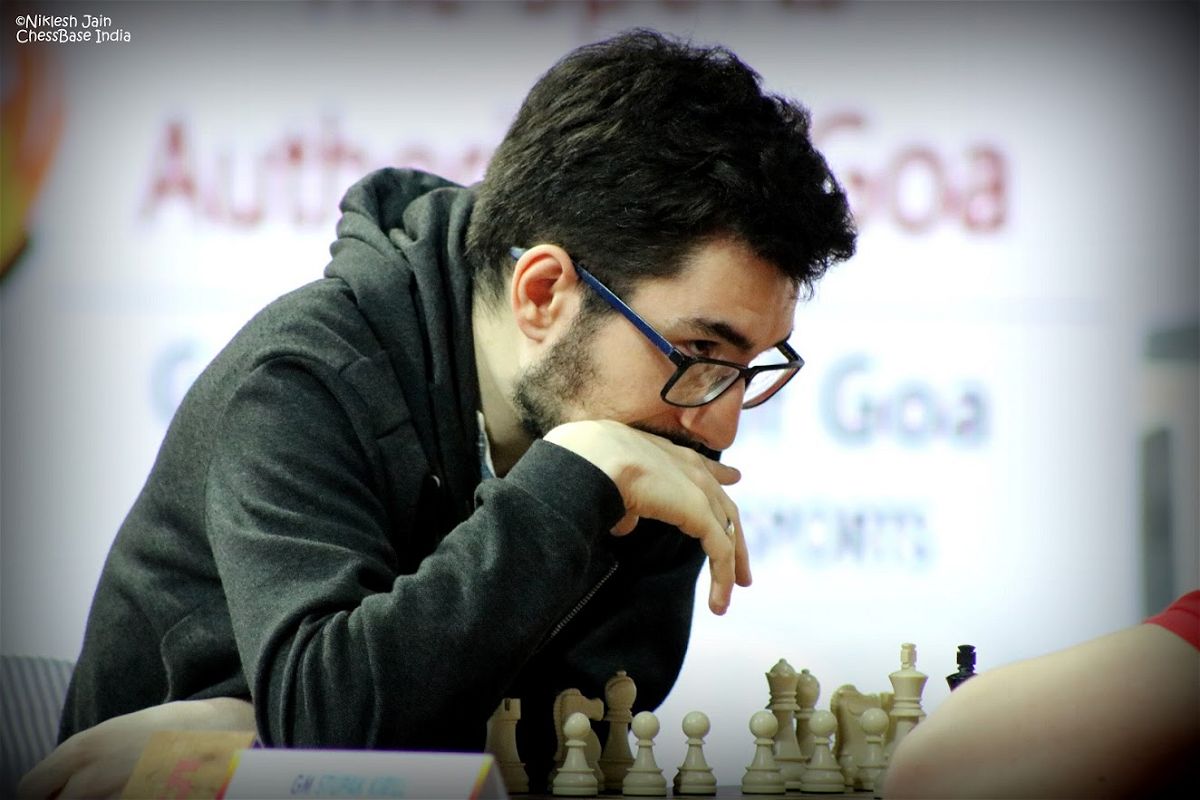 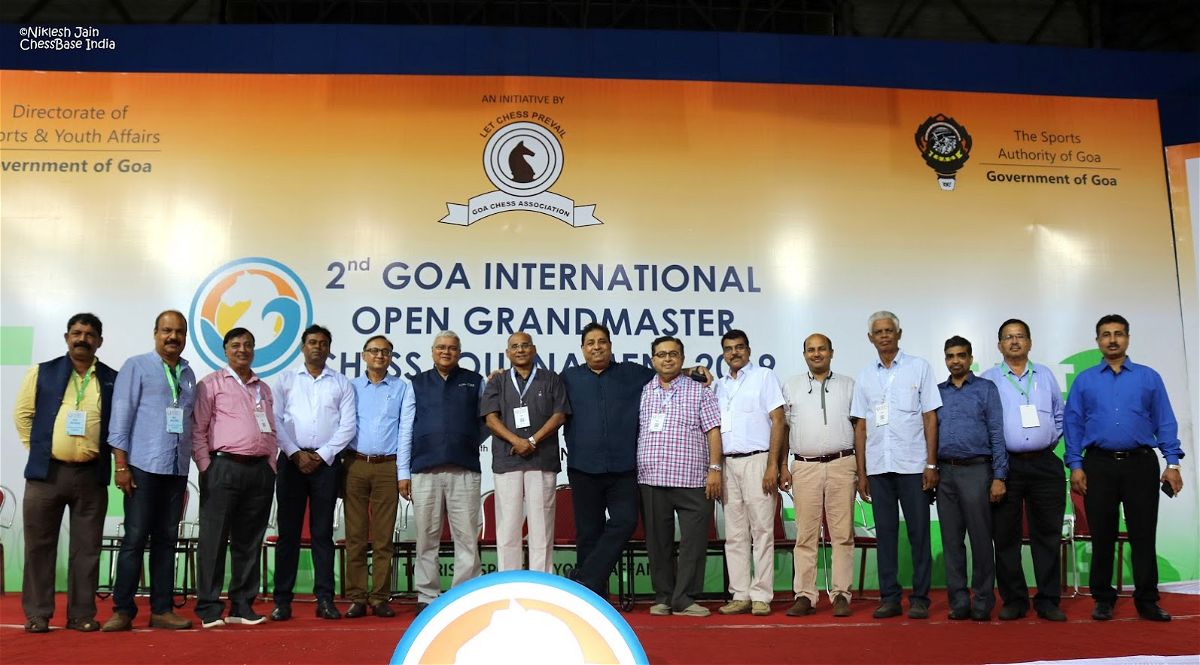 The AICF annual general meeting was held in Goa and secretaries from all the states of India flew in to attend the meeting | Photo: Niklesh Jain 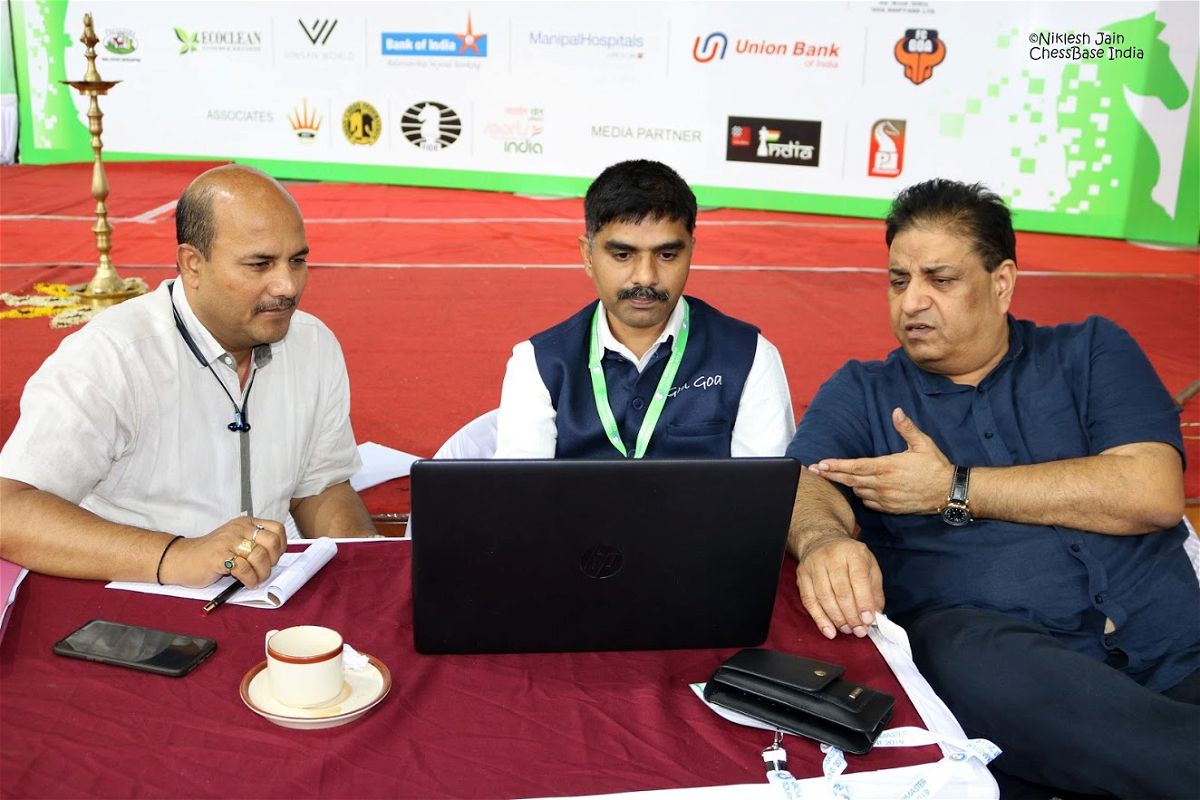 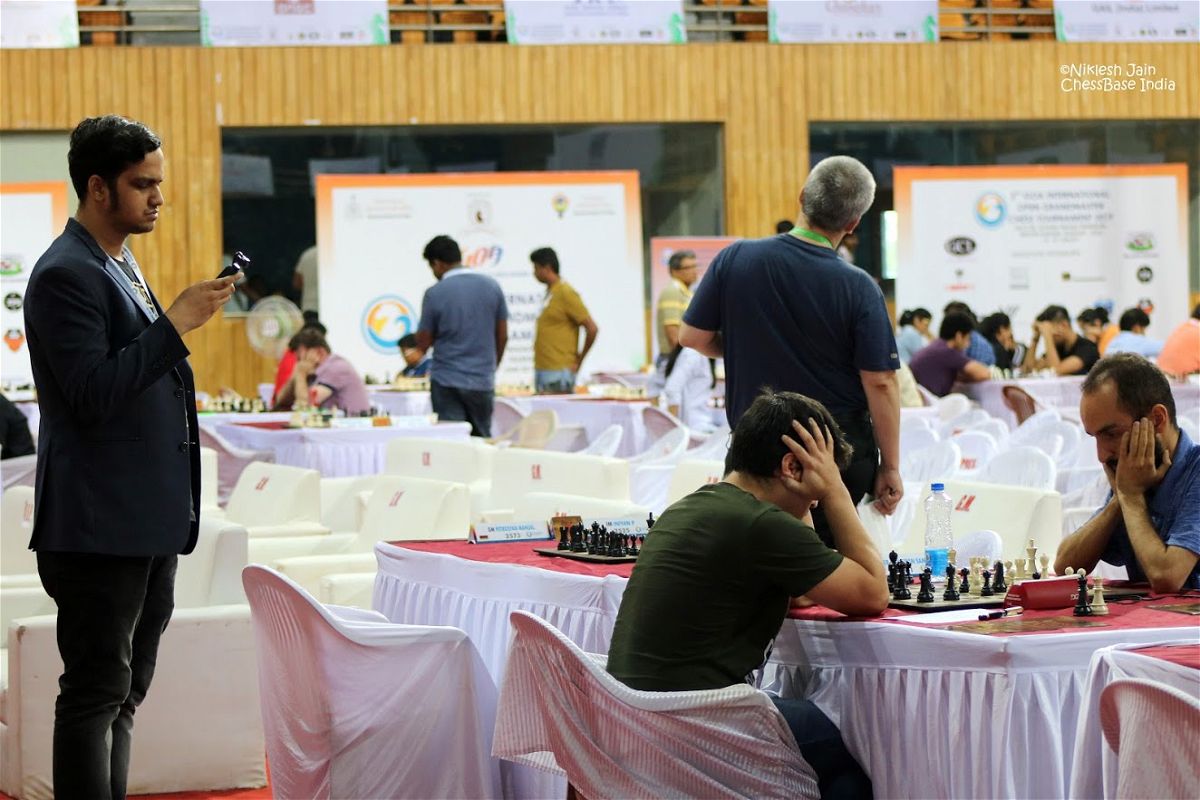 Solid like a rock! Shahid Ahmed is the reason why you see so many game videos on the ChessBase India channel during Goa GM 2019 | Photo: Niklesh Jain 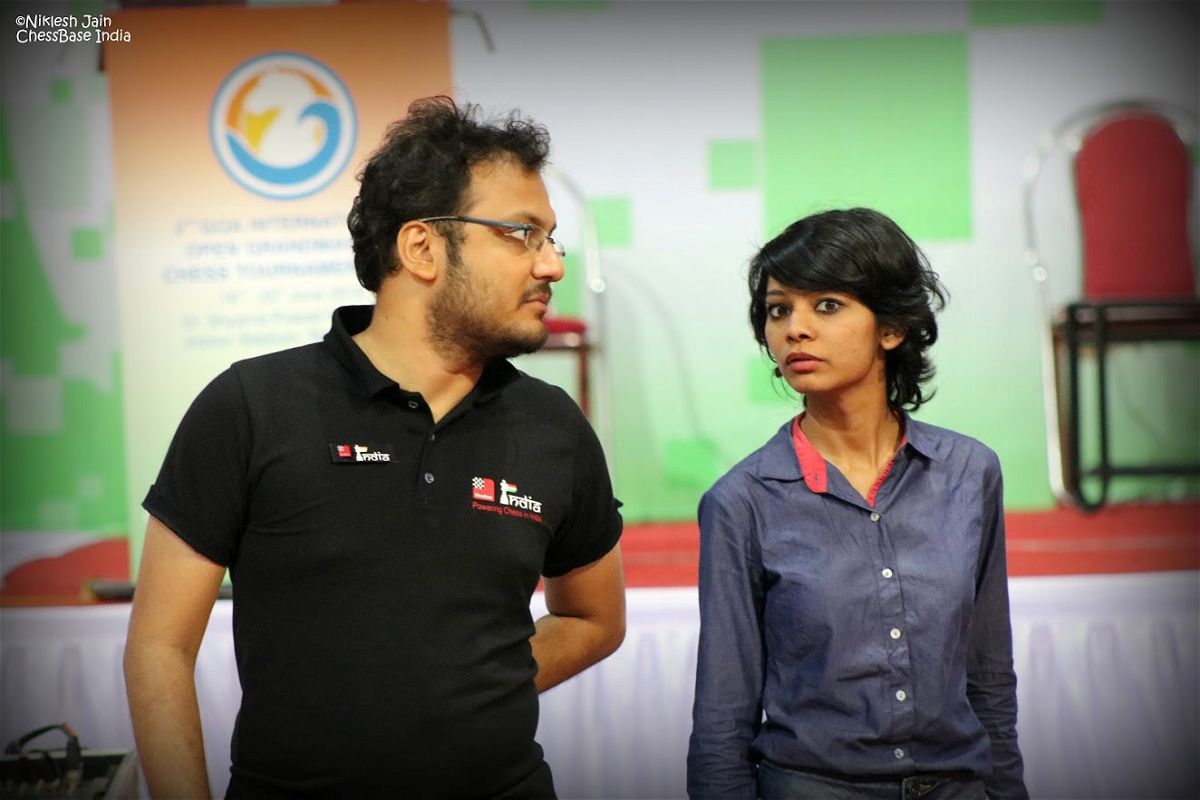 Oh my God, did we just leave the geyser on in the room?!! | Photo: Niklesh Jain 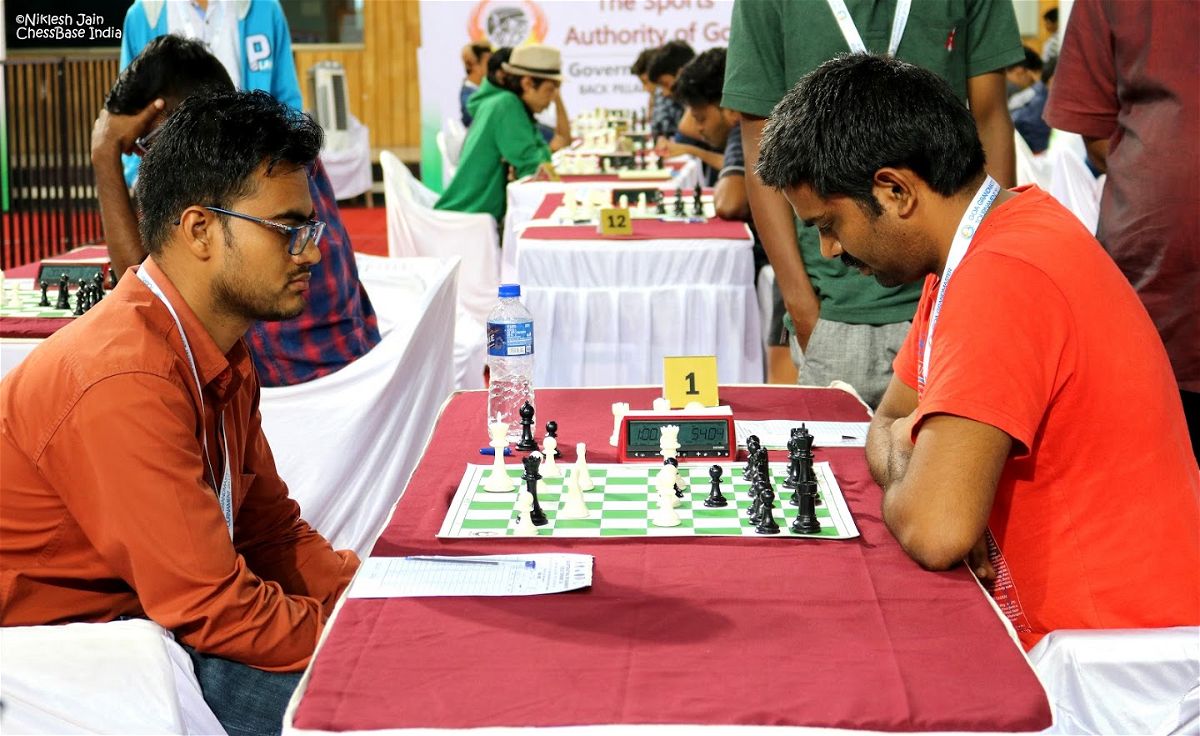 The top board clash between Mayur Kalbande and Prashanth Vangala ended in a draw | Photo: Niklesh Jain 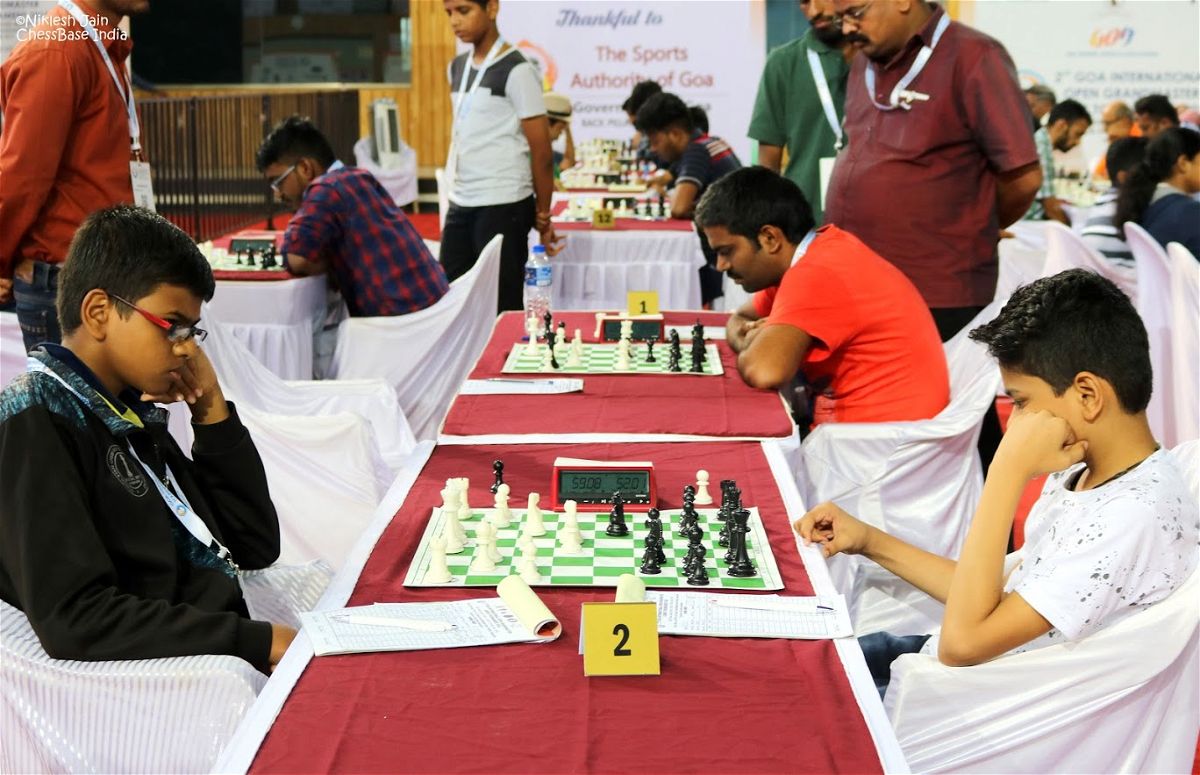 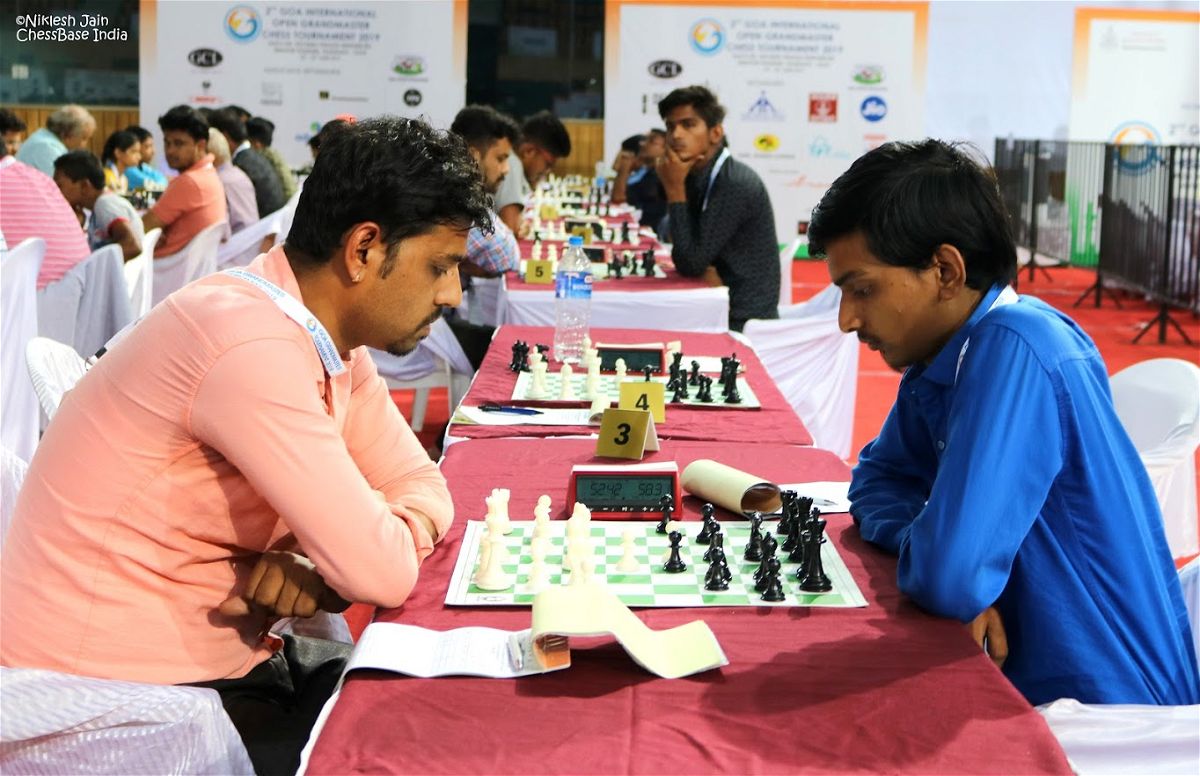