Chess, in its very essence, is a constant struggle to either seize or give up control of certain key squares on the chessboard. Grandmaster Sundararajan Kidambi realizes this fundamental truth while going through the analysis of a very instructive ending that happened recently between Wang Hao and Maxime Vachier-Lagrave in their game from Candidates 2020. In this article he puts down his musings in his characteristic clear and concise manner. For anyone who wants to improve their understanding of endgames in general and the dynamics of minor pieces ending in particular, this beautiful piece is a must read.

In Search of Harmony

With an abundance of time at one's disposal these days, I came across an instructive and thought provoking piece of analysis of an ending which occurred in the recent Wang Hao-MVL game of the candidates tournament. The author (and my friend) Grandmaster Vishnu Prasanna is not only a gifted player and trainer, but also a fine thinker! Looking at this fascinating game and Vishnu's comments, triggered a variety of thoughts with regards to approaching a chess position. 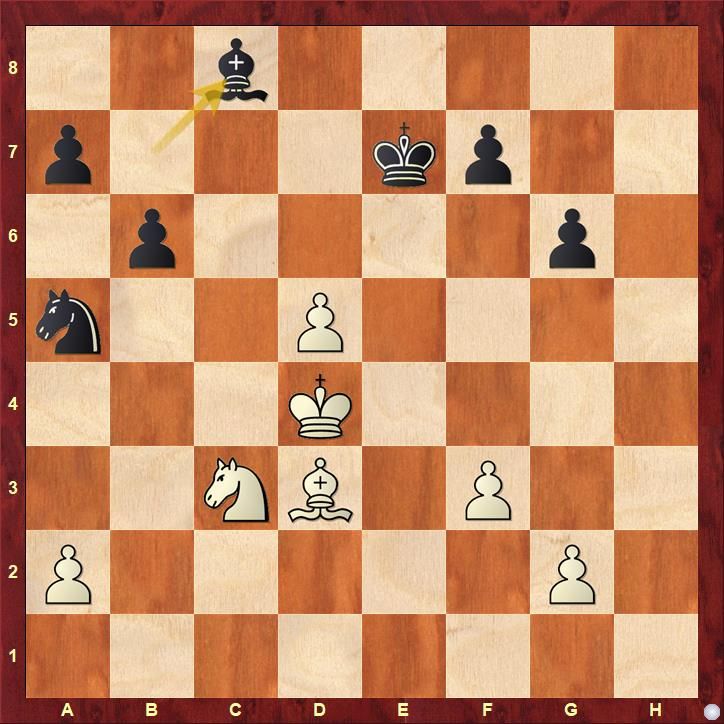 This is the position after Black's 32nd move Bc8. As Vishnu rightly points out in the ChessBase India video, Black's main problem in this position is that his Knight on a5 is out of play. Had it been on d6, the position would not at all be bad for Black. But such small differences, sometimes as little as one tempo, can alter a position diametrically. The key factor in this position that seems to determine White's advantage is the superior placement and activity of his King. White need not actually just be contented with the fact that his King has reached a commanding post on d4, but can even strive to improve the royal monarch's position by rolling a red carpet! 33.Nb5  a6 34.Nc7?! were the next moves played in the game. 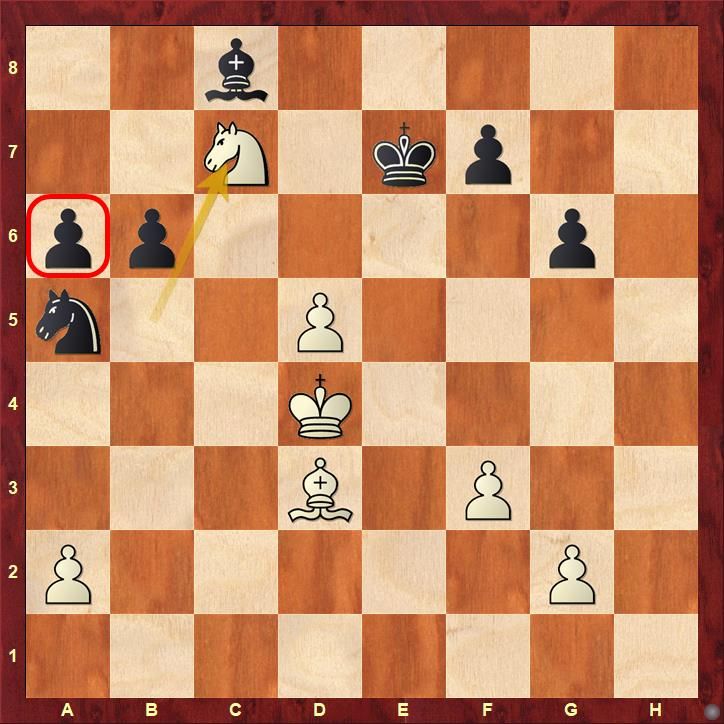 With 34.Nc7 White seized his opportunity to grab a pawn ... But was this a wise decision?

Can there be anything in the world with winning a pawn without any resistance? Well, if only things were that simple! Here again Vishnu's explanation is crisp and efficient! His reasoning is that Black trades off a pawn to improve the position of his Knight stuck on a5.  Steinitz, in his Modern Chess Instructor, puts forward a view that Rook Pawns are not qualitatively equal in strength to other pawns on the board as they control only one square wherever they stand, relative to pawns that stand on other files which control two! It may not have too much relevance here. However I do feel that in this case White's Knight moves too far away from the critical d6 square, a square which is key for both White and Black (for Black, to blockade the mighty passed pawn, and to evict the blockader for White). And if in turn Black establishes a strong blockade on d6 it also means that White's King cannot be used more efficiently from d4. Just Imagine a situation in which White wins the b-pawn instead of the a-pawn, it would be immediately fatal for Black as White's King would march onward to c5 and further up the board and wreak havoc. So, in this position the b6-pawn is a vital link in Black's position which is acting like a dam against White's King. So in some ways, White does not even need to win the b-pawn but instead merely coax Black to push it forward one square to b5! This is perhaps all White needs in this position as illustrated by the following line: 34.Nc3!! b5 35.Kc5 Kd7 36.Kb6! Nb7 37.Ne4 with a winning advantage! 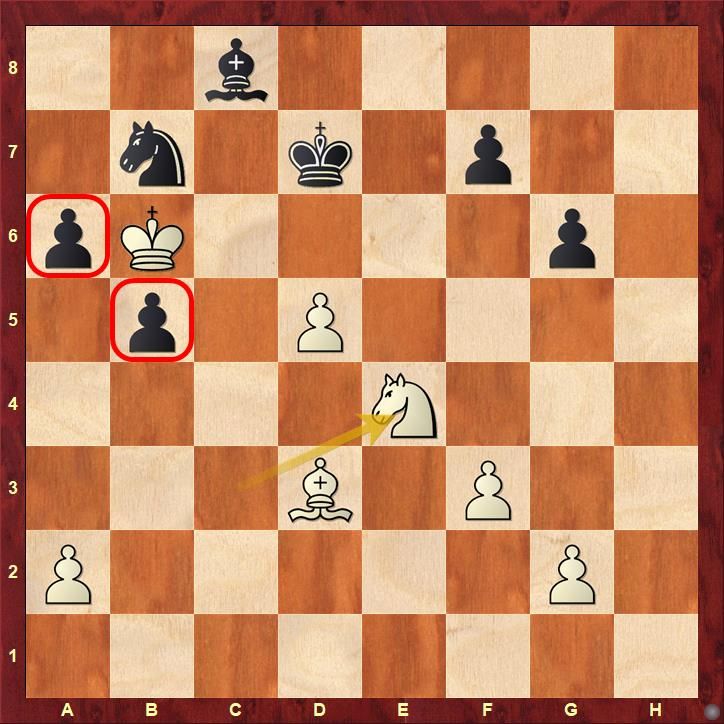 The above position deserves a diagram. The visual effect clearly shows the decisive role played by the activity of the King! If Instead Black decides to answer 34.Nc3 with Kd6 then we have 35.Ne4+ Ke7 36.Ke5 b5 37.g4 Nb7 38.d6+ with a huge advantage again. 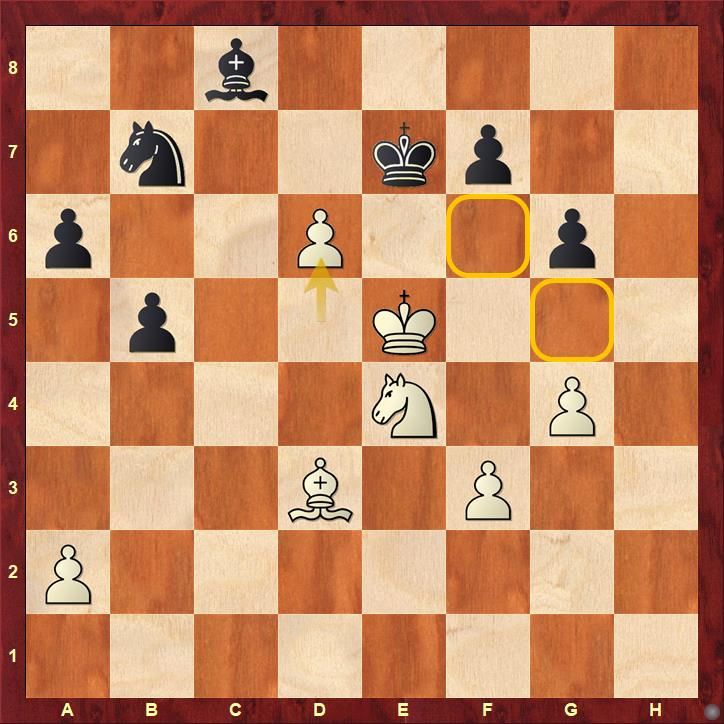 Another position from a line which I feel deserves a diagram. Note that the King conquers more dark squares, only this time on the other side on the board! These two positions led me to ponder the following: Isn't chess or specifically, positional chess, a constant trade off between control and relinquishment of squares on every move?

Now let us get back to the game continuation. The game followed 34.Nc7 Kd6 35.Na6 Nb7 and already the player's reached the decisive moment in the game. 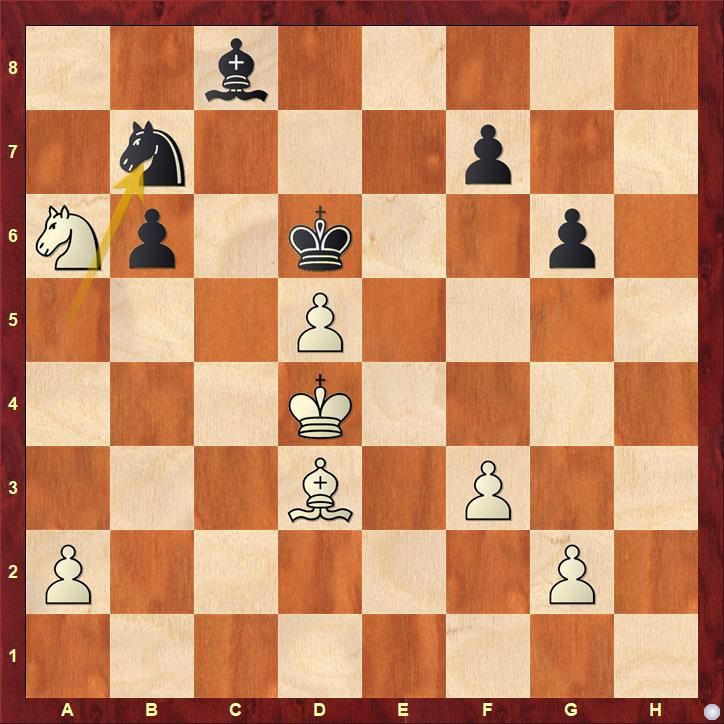 Here White nonchalantly continued with 36.g4? and this might have been the decisive mistake after which a win no longer exists according to Vishnu. It is really weird to fix the pawns on light squares when you yourself have a light squared bishop. Perhaps White completely relaxed here and missed the simple response 36....g5! which not only fixes the g-pawn on a light square, but also the pawn on f3. However, I do not think that the good or bad Bishops is a relevant factor here. I feel the key to this position is control of dark squares. White needs to keep a path (along the dark squares) into Black's camp open for his king. So, by retaining the pawn on g2, White could have manoeuvred his knight to e3, and then continued with f4-g4 and g5, which would in turn secure the e5 square for his king. And this would definitely have retained winning chances in the position.

The diagram to the left is particularly pretty. The teamwork of the knight on d6 and the pawns on f6 and b6 forms an unbreachable barricade against the White King by controlling all the key entry squares. In fact the black king does not even have that big a role to play with such an impregnable formation of his other units! Also one has to bear in mind the role played by White's own pawn on d5, which blocks the way for his king via d5! 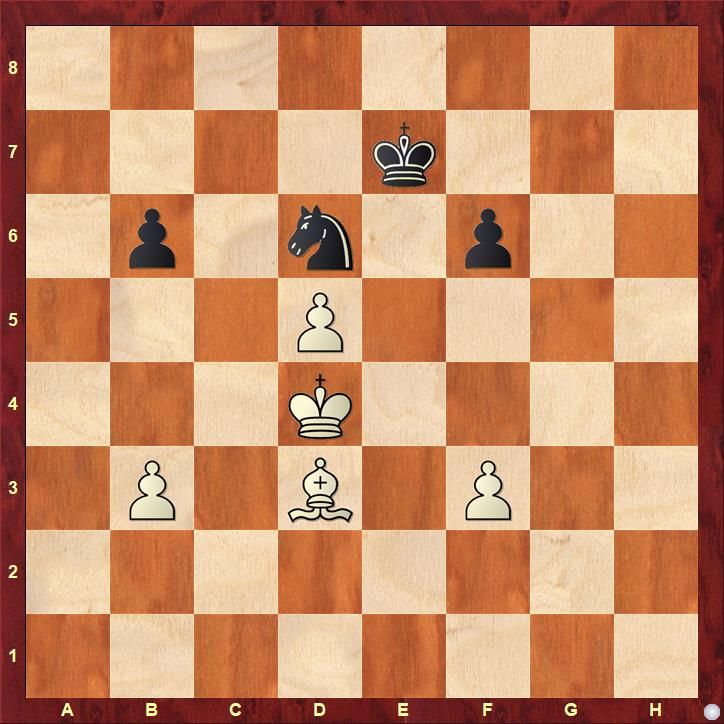 The final position above from the second game of the Kramnik-Grischuk match, Kazan 2011 also illustrates this idea clearly!

Here's the full game with detailed analysis of the ending for you to work through in details:

You can listen to Vishnu's thoughts about this instructive ending in this video.

So my musings about this very interesting game are as follows:

1.The position of the King and its activity are one of the key aspects of the initial position.

2. The king should not be content to reach d4, but should strive to march onward to c5-b6 or e5 as dictated by the needs of the position and opponent's moves

3. Colour complex is another key factor, in this instance White's control of dark squares is pivotal.

Or in short, (positional) chess is a game of trade off between control and relinquishment of squares on every move!

Sundararajan Kidambi is the 19th Grandmaster of India. He is especially adored in the country's chess circle for his impeccable knowledge of the chess classics. Encouraged by his mentor Srikanth Govindaseshan, Kidambi started his own chess blog called the Musings on Chess and this article has been reproduced from there with his kind permission.