The first introduction to the game of chess lay in the fascination of knights for me. They are the most unique pieces on the chess board and the ability to fork a king and queen and/or rook(s) were simply fascinating to understand as a child. World Champion Capablanca considers that the knight is a very dangerous piece for an amateur, but as one's strength develops, he starts appreciating the value of bishop. While, this is very true, the fascination with knights nevertheless does continue as one grows into a stronger player with a deeper study of chess strategy. Enjoy this beautifully explained concept of blockading knights by Sundararajan Kidambi. Photo: Shahid Ahmed 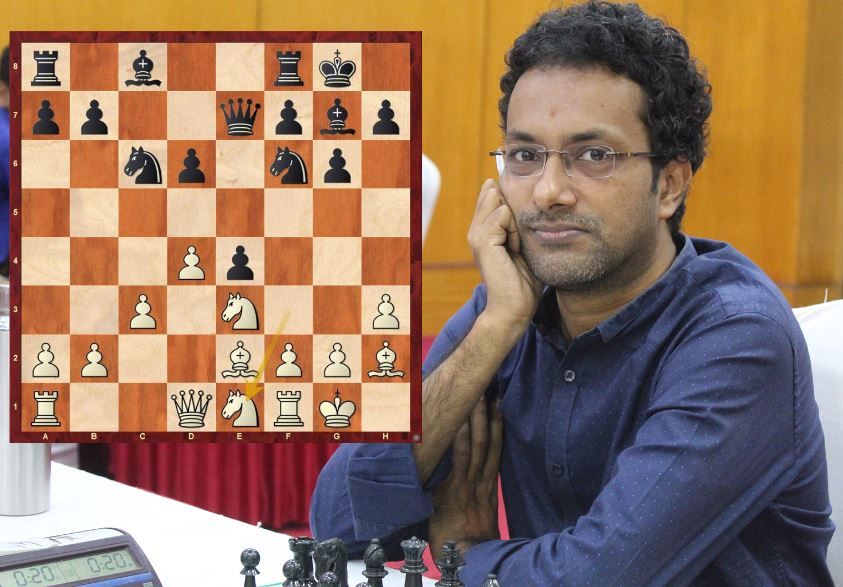 When talking about passed pawns, Nimzowitsch was the first teacher who taught about blockading them. Of course this has always been known to masters intuitively and were employed in their games. Nimzowitsch discusses his thoughts about Knights being excellent blockaders of passed pawns. In addition when we come to the concept of protected passed pawns, there is no better piece to blockade than the knights. They not only block the passed pawns, but they attack its protector! This is only possible because of the Knight's unique movement pattern on a chessboard.

When looking at a recent game of Caruana against Shankland, I was very impressed with the strategic depth and control he showed in the game. 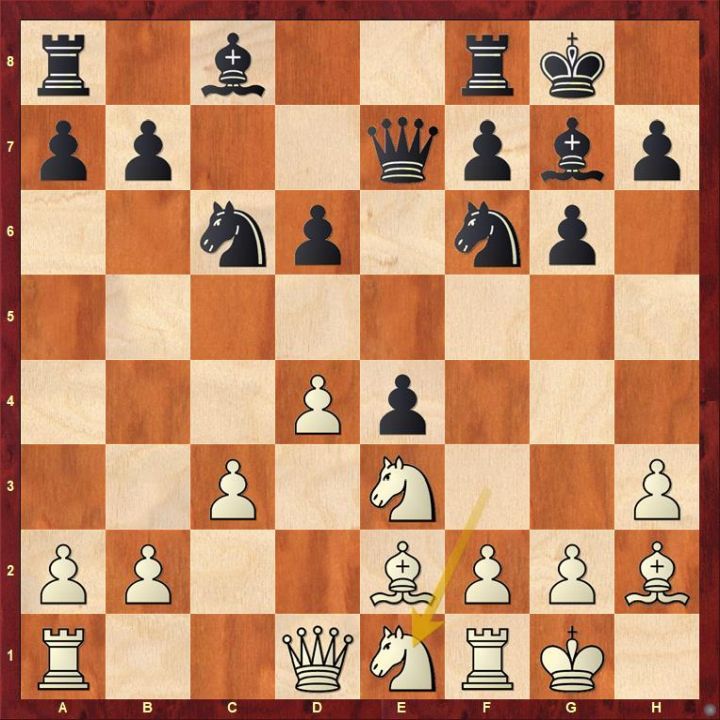 This is the position after White's 14th move in the above mentioned game. It continued

This is indeed a very clever move. White's Queen does not belong to d1 is quite clear, but its not clear where it should go to. 16.f3 or 16.f4 seem to be more natural continuations. White treats the position in a deeper fashion. He thinks about what his opponent's idea is. Black would probably like to move his knight away from f6 and then go for kingside pawn expansion with f7-f5. White actually wants Black to start executing that idea before going for his natural pawn break with f2-f3. The point being, Black would not be able to recapture with his Knight on e4 after White's f2-f3 and fxe4.So, in effect White wants to create a protected passed pawn for Black, which would ensure the safety of his Knight on e3 as it cannot be attacked by a Black pawn any longer! In doing so, he does not want to just wait with any move, but play a constructive one! So, the text move keeps the f3 idea in mind and intends to bring the queen via e1-h4 diagonal into the game.

It is very hard to criticize such a natural move, but as we have discussed this plays into White's hands. 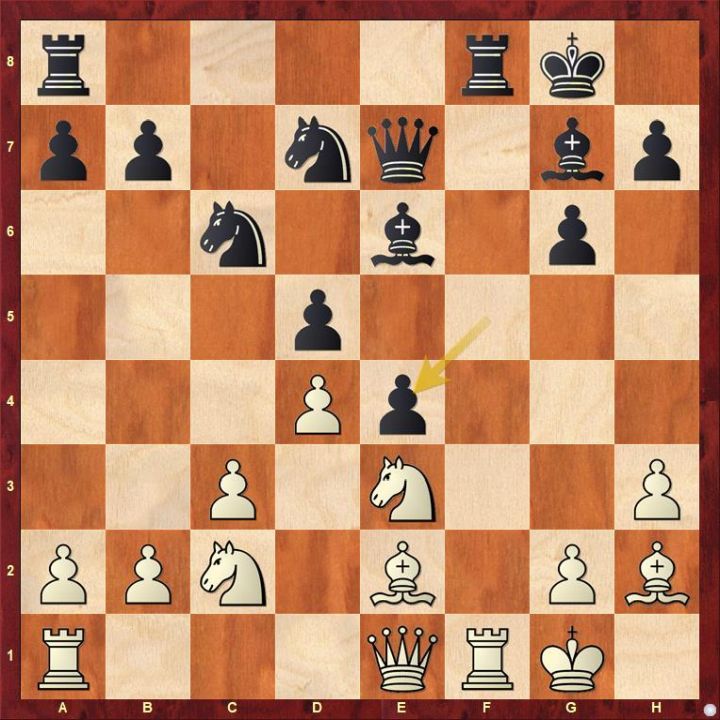 This was the position that White was aiming for, now, the knight on e3 is in an ideal position. It blocks the e-passed pawn and at the same time keeps an eye on its protector on d5. It is ably supported by a reserve knight on c2. Nimzowitsch would have simply loved Caruana's position!

Another fine positional move. White clearly understands that his position has great potential (room for improvement) - in Mihai Suba's terms. Whereas Black's position has reached its zenith and gradually moving towards its nadir! White avoids exchange of Rooks and creates space to improve his pieces further. 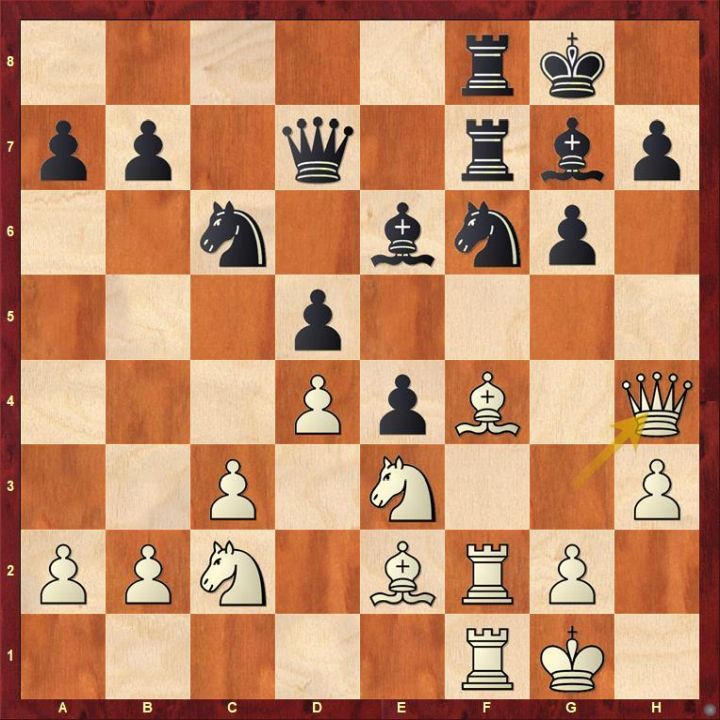 Compared to the last diagram White has improved his pieces greatly. Outwardly it appears that Black has also managed to improve his pieces, but there is a subtle difference in the piece coordination. White is creating serious threats along the f-file whereas Black is just defending and hoping the strike would not be too hard. Once the Bishop unmasks itself from f4 and moves over to g5 or h6, Black's weakened dark squares are going to be a major source of concern for him.

To remove the knight from the danger zone on the f-file. But this gives an opportunity for

'Whenever an opponent makes a move we need to observe what squares the move gains and relinqushes control of. This is a fundamental way of looking at a position'. This idea was said by my Friend GM Arun Prasad several years ago after he attended a camp of the Israeli Grandmaster Alon Greenfeld. This has also been mentioned by my friend Grandmaster Ramesh in his book Fundamental Chess: Logical decision making. He calls it the drawback principle - what's the drawback behind the current move?

aptly bringing the reserve blockader into play and freeing up the g4 knight for more aggressive actions.

Finally white has transformed his advantage into something tangible. The weakness of dark squares and the absence of the fianchetto Bishop seems telling.

Perhaps 27...Rf2 was better as that would not result in an immediate loss, but positionally Black's position looks very suspect anyway. 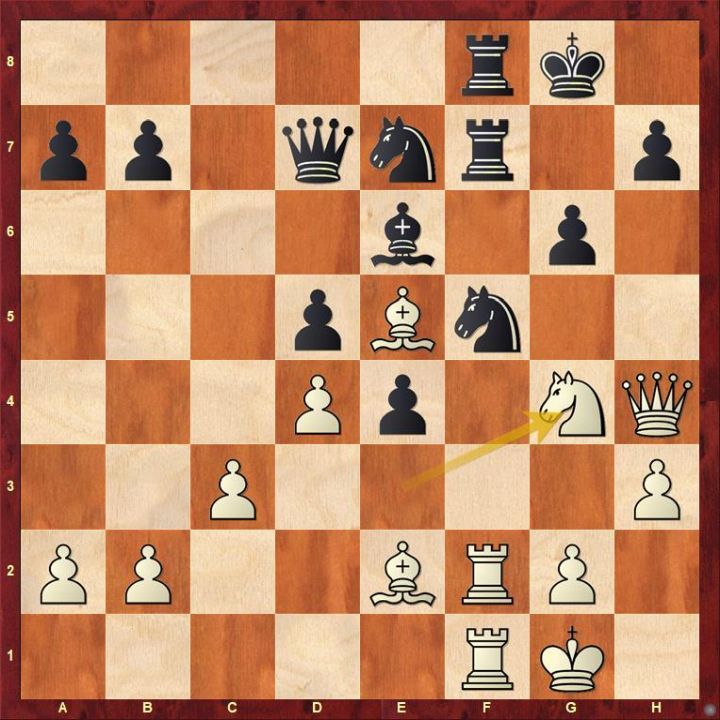 A complete rout of Black's army on the dark squares is imminent. White has crowned his strategic play with crisp tactics!

White's domination is too much for the piece sacrificed, he is going to earn material back with interest if Black decides to avert checkmate, and the rest is simple.

Typical of Fabi, concrete action in an overwhelming position.

Having played through this game, one cannot help but remember an old game of Nimzowitsch. 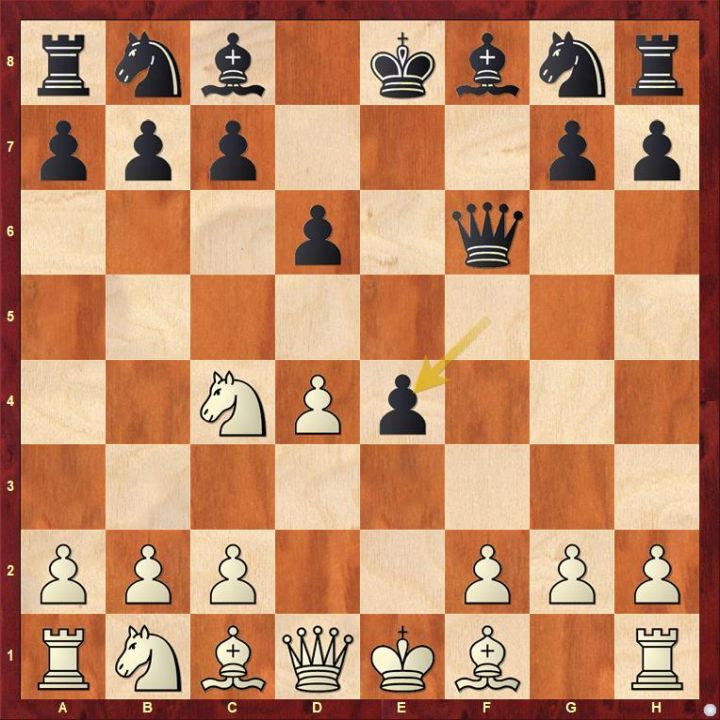 This is a position after Black's fifth move in a game of Nimzowitsch as mentioned by him in his seminal work "My System". Here the most natural and common move is 6.Nc3. However Nimzo came up with

He gave this move an exaggerated double exclamation marks, Although his evaluation of the move may not be wholly correct. He explains the reasoning behind his move by the idea that he is even disregarding playing for straightforward development, by instead playing for blockade of the e-pawn.

Once again an exaggerated double exclamation mark by Nimzo, but the idea behind this move is to force Black to play d5 and later use it as a weak point to attack aided by the active blockader on e3( the strong knight) 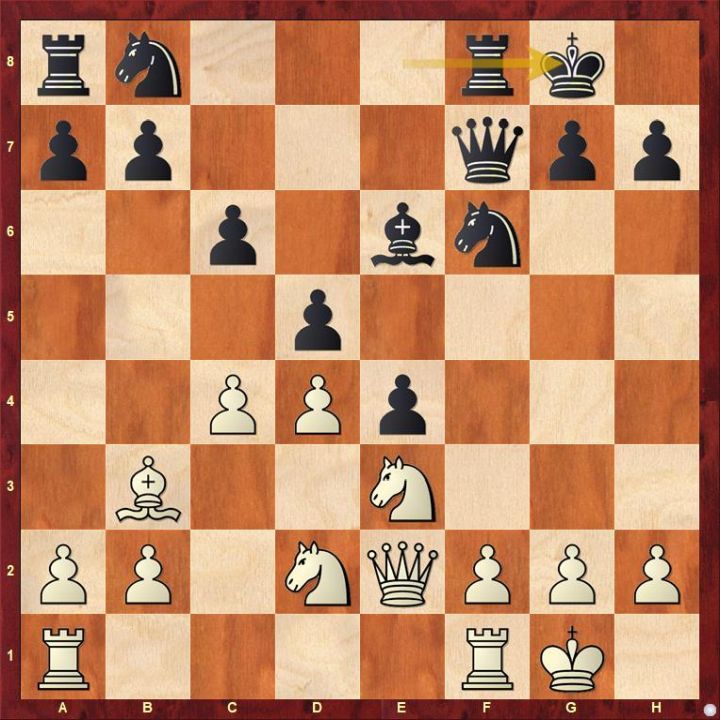 The so called strong point on d5 has been destroyed which shows a triumph of White's strategy. White went on to win a fine game. The whole game with complete annotations of Nimzowitsch can be seen at the end of the article.

Slightly diverging from the theme of the article, the above game of Nimzowitsch triggered the thoughts of a famous game of Bronstein's against Mikenas in 1941. It starts from the diagram where we entered the Nimzowitsch's game. He gives a very compelling reason to how he arrived out at what he considers as the best move in the position which is 6.Be2!! That is the beauty of chess, from the same position two great masters can logically arrive out a variety of different solutions and make them appear equally good. A look at the database , though shows that 6.Nc3 is still the mainline. At the end of the article one can see Bronstein's whole game with his fine annotations from his instructive book "200 Open Games"

Coming back to the topic of Knight blockade, let us take a look at a game of the Patriarch Mihail Botvinnik. 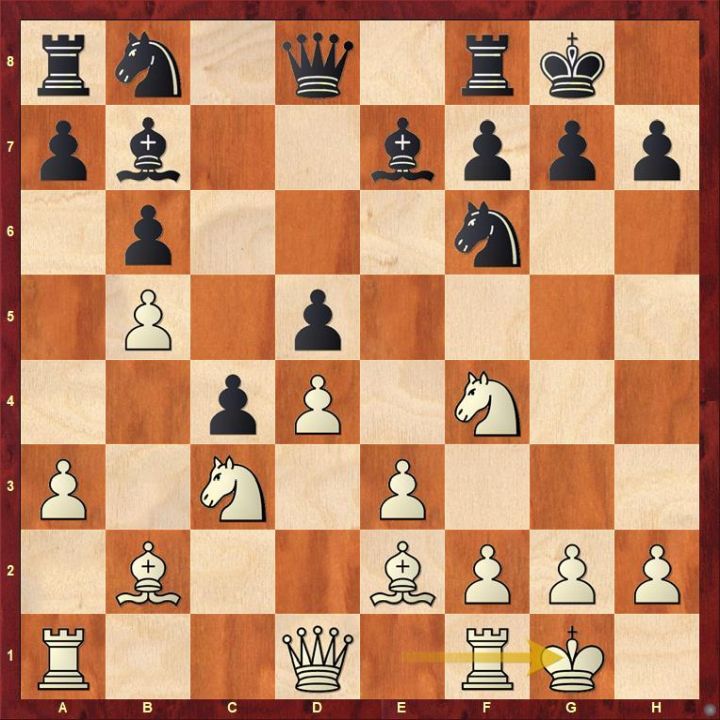 In this position after White's 13th move Black continued

White overprotects his strong pawn on b5 where it restricts opponent's pieces. However Botvinnik points out that 14.bxa6 is a very interesting possibility which makes the b6-pawn weak and a target of attack.

Here Botvinnik rightly points out that 19.bxa6 as a much stronger intermediate move. His point is that White could have stopped Black from completely locking up the Queenside, which during the game Botvinnik did not consider as a problem.

This changes the position a little bit, as Black locks up the Queenside wholly. Nevertheless, we see the ideal features of the Knight blockade on c3. The c-passed pawn itself is not strong at all, and the pawn on d5 can remain a long term target right up to the endgame. We only need the mighty knight on c3! 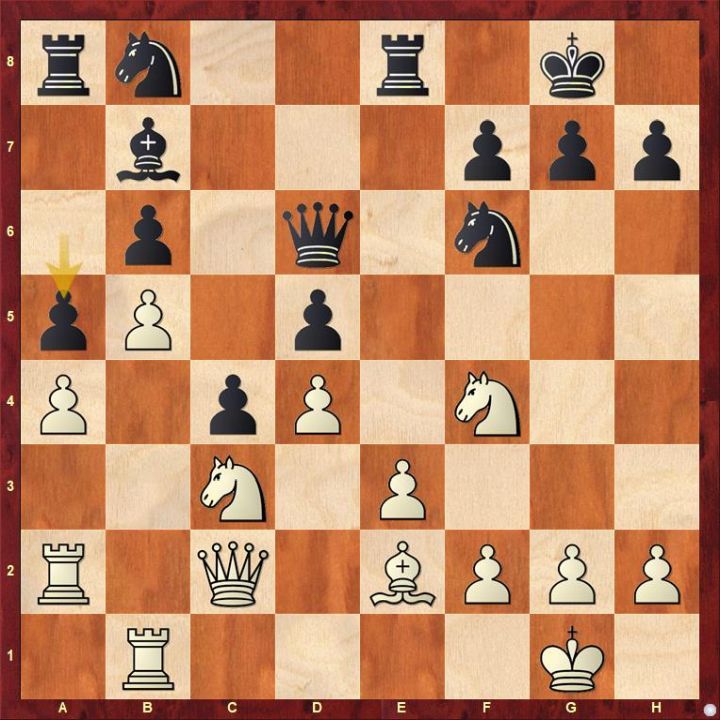 The game entered a long manoeuvering phase, and at the very end White broke through on the kingside and after that destroyed Black's d5-c4 protected passed pawn duo. The way the rest of the game continued was quite instructive and is worth taking a look at.The full game with Botvinnik's analysis from his best games book is attached at the end. 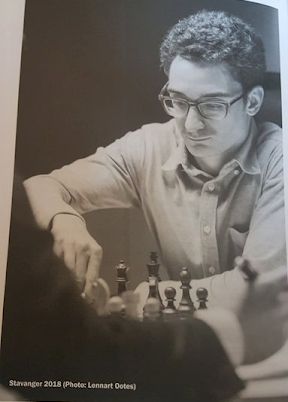 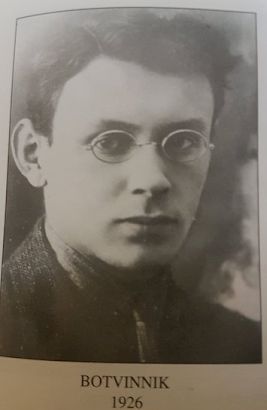 Finally, the blockade of the protected passed pawn on c3 in this game triggered me to the thoughts of another classic game of a child prodigy Sammy Reshevsky. 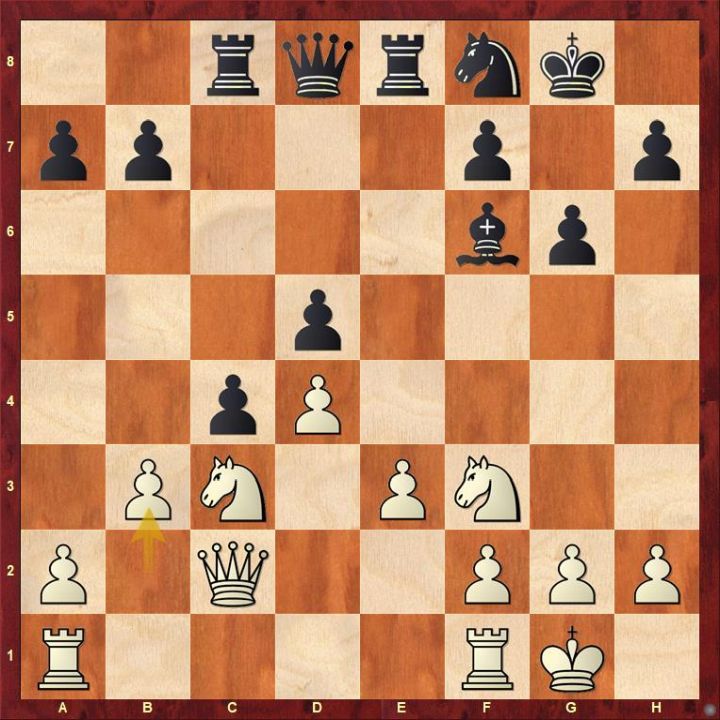 This is a position from the Sammy's game against the great Cuban after 15th move. Capablanca continued provocatively

Again as we have seen in the other games, White allows Black to create a protected passed pawn to secure his knight on c3.

as in the Botvinnik's game earlier Reshevsky tries to open the Queenside up. Here the primary weakness for Black is the d5 pawn, but unlike in Botvinnik's game there is also a second target on the Quenside. Because of this Black's position is strategically untenable! 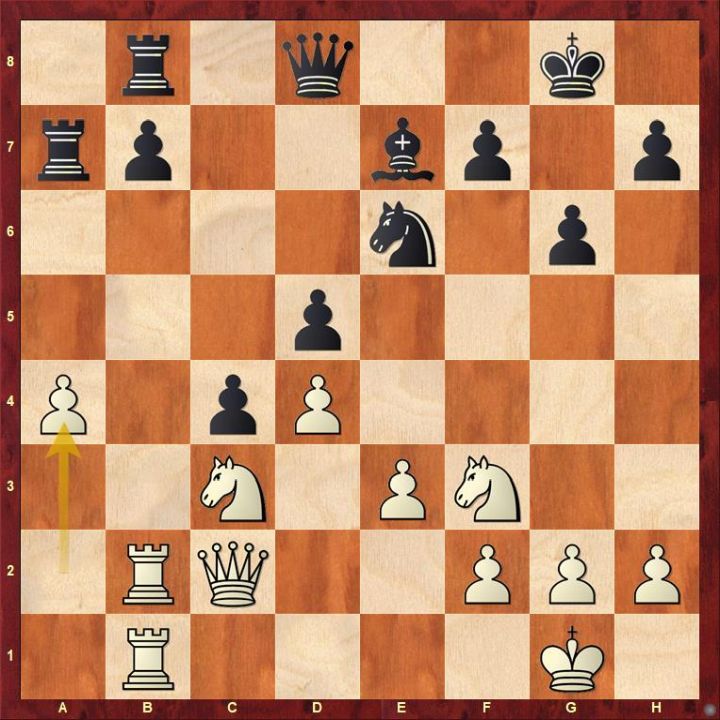 White kept targeting both b7 and d5 weakness and outplayed the World Champion by purposeful play. The remainder of the game is worth careful study too.

I have enclosed all the games discussed here with its full annotations from Reshevsky, Botvinnik, Nimzowitsch and  Bronstein in the link given below.

Knight is one of the best blockaders of a passed pawn, and especially a protected passed pawn, as it can attack the protecting pawn.

As a strategic idea, the blockading side can even create a protected passed pawn for the opponent to make it a target of attack.

ChessBase India is happy to see GM Sundararajan Kidambi writing his third post of the year in his blog "Musings on Chess". Knowing what an encyclopedic knowledge the grandmaster from Chennai possesses, I think we are in for a treat! One can only hope that Kidambi continues writing regularly! We will keep reminding him about it!