Castling into it (King's Placement-2)

Castling is a privilege which both sides have in each game. Despite the choice being two, a player can castle only once in the entire game. The choice often determines the fate of the game. It might seem easy, yet the underlying consequences of a correct or a misjudgement can be long term. While most of the time, castling becomes a part of a theoretical move, sometimes a player may have to take the correct call of their own accord. GM Sundararajan Kidambi shows two examples of former world champion's games where their opponent and they themselves made an incorrect call. Check out detailed analysis by Kidambi and enrich your knowledge. Photo: Shahid Ahmed

Sundararajan Kidambi analyzes the Castling into it (King's Placement-2) in his blog | Photo: Shahid Ahmed

Fischer used the term 'Castling into it'  to signify Castling into a flank with a risky or a weakened pawn shelter. I am using this term more broadly to signify a risky king placement because we show our cards too early. We had earlier looked at the factor of king's placement being an important one based on games of Maxime Vachier Lagrave and Ganguly. This is a time honoured problem, and one that is not easily understood even by the all time greats. From the games of Steinitz until modern ones, this has been something to ponder about. I was recently looking at a game from 1948 World Championship match tournament between Keres and Botvinnik, that sparked an interest to revisit this topic. An interesting attempt to grab more space. This was what Carlsen tried too in the most recent World Championship versus Nepo. Botvinnik does not rate this move highly, but his move has stood the test of time and is considered to be good even to this day!

Keres goes for the most ambitious approach akin to an accelerated Benko. Nepo settled for normal reverse Benoni with 4.Nf3 and later d3 etc. This was the infamous ninth game where he later got his Bishop trapped on b7 and went on to lose.

Botvinnik recommends 4...a5 to play for the conquest of the c5-square as the better option and quotes the game Goldberg-Bronstein 1947. While this seems like the more flexible option, the text move should not be bad as well.

Once again, Botvinnik does not think highly of this move. Instead he recommends 5.bxc5 Bxc5 6.Ba3 like a Benko Gambit with an extra pawn on the a-file. Though one must say that Benko's main idea consists of using open files for the rooks and the material parity may actually reduce some of Black's activity. But, yes its a fine option of course. However, I feel the move played by Keres also has its advantages, it strengthens White's control on the long diagonal and takes away the natural c6-square from Black's Knight despite relinquishing the tension.

The most natural response taking more space in the centre, but 5...a6!? also came into consideration to break up White's pawn structure.

This move is where White starts to drift in the wrong direction. Was there a need to close the powerful long diagonal in White's possession? Perhaps Keres did not like an eventual preparation for e5-e4 pawn break by Black as in a Benoni. In this regard I found a passing comment by Botvinnik quite instructive. Those who have studied Botvinnik's works know that he holds Capablanca in very high regard, and here he suggests an idea for White which Capablanca would have played if he had this position. His suggestion is to play 7.Nd2!? and only when Black plays 7...f5 White would reply with 8.e4! In this way White would have retained the long diagonal open. Keres too does not like his move at all and instead recommends 7.e3 to keep the diagonal open, like a normal Benoni-type position. 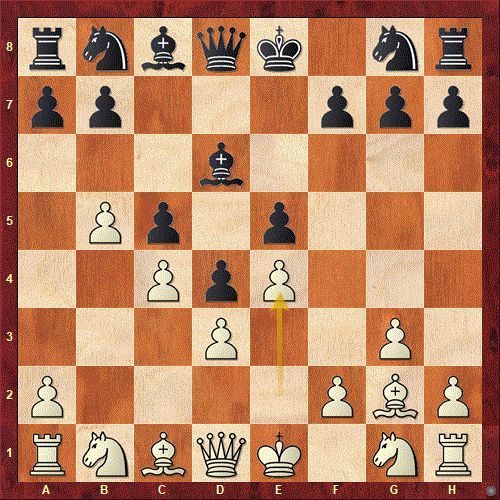 This rook-pawn foray is typical against a fianchetto especially so when opponent's knight is not on f3. In this case the idea of the move is not only for a direct attack, but a more subtle one. In this King's Indian closed central structure, White is clearly aiming for f2-f4. So, Black is aiming to make this harder for White. If White answers with 9.h3 Black can answer with 9...h4 10.g4. This makes f2-f4 break of White impossible. And coming to the game continuation of 9.h4, this leads to a weakening of the g4-square when White eventually goes for his f2-f4 break. 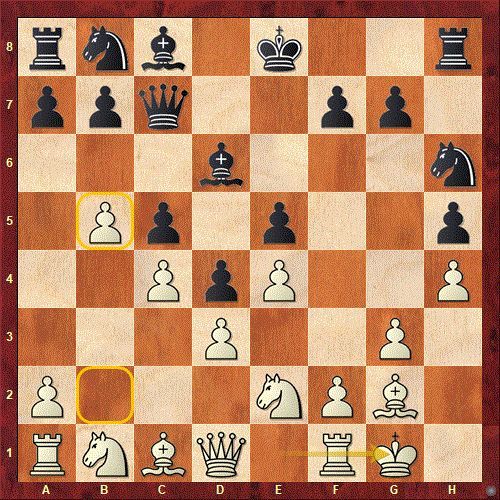 Here we come to the critical moment of the topic. Surprisingly, neither Keres nor Botvinnik comment about this decision to castle. Usually in an analogous position in a King's Indian Defence castling is very normal. Yet, this position has specific features which makes me question the decision to commit the position of the king to the kingside. Importantly, White has already closed the whole of his centre and even the queenside in terms of his pawn structure. If White had pawn on c2 and b2 instead of c4 and b5, then he would have had the possibility of a central break with c2-c3. This would have meant that Black's king would not have a completely safe haven on the queenside. However, in the current situation White does not have a pawn break in the centre or on queenside. This clearly favours Black in hiding his king on the queenside later on in the game. Keeping this in mind, White surely should not have determined his king's placement to the right side of the board, but instead waited! This decision can be compared with the f5-f6 decision in the Ganguly-Fedoseev game discussed in the previous article.

Both Keres and Botvinnik do not like this weakening move and instead suggest Nd2-f3-h2 to cover the soft g4-square,

In this game, Keres has lost a lot of flexibility by moving his pawns forward particularly to f5 and b5. Black has the pawn levers g7-g6 and a7-a6 and can use them as and when he wants them! White cannot open up any side of the board at his own bidding. This is a major disadvantage. Couple this with the king on g1 situated like a sitting duck, and Black can slowly but surely develop his attack after due preparation. The strategic battle has been lost.

Rest of the game is very interesting and instructive and features a lot of dramatic moments! The full game with comments has been shared as a link to a replayable board at the end of the article.

While studying this game, I could not help but recollect another game which featured a similar theme. The game was one between Kramnik and Meier from Dortmund 2014. It was a rare one that Kramnik lost as White against the German Grandmaster with whom he had a fabulous score until then. I will bring up the opening part which is relevant for the topic, up for discussion. 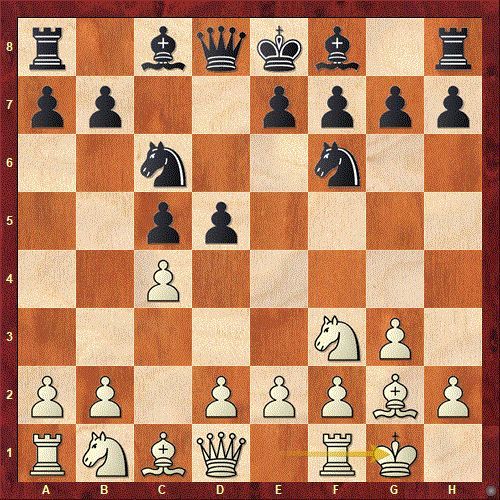 Kramnik has contributed extensively to every opening that he has ever played. Here too he has played games with 5.cxd5 and upheld the reverse Maroczy structure. In this game I get a feeling that he wanted to explore and not play his prepared openings.

Ofcourse Black grabs space and opts for a Reverse Benoni. This time it is even more favourable when compared with the previous game.

As Meier rightly points out in his comments, the inclusion of 6.a3 a5 seems to be in Black's favour and hence this decision is puzzling. For starters the knight can never reach c2 via a3 after this. 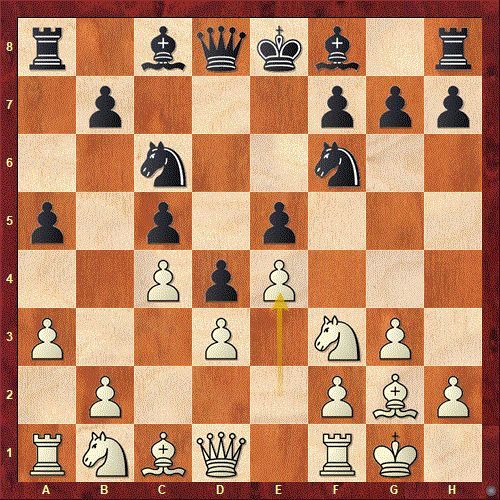 A surprising 'Lapsus Manus' from the legend! Almost all of the points that were discussed in the Keres-Botvinnik game ring true here too. White has castled early and Black has not! He needs to keep the possibility of a central pawn break open. Since, he has already closed the right wing with c4, completely locking the central structure with e4 is extremely dangerous. Kramnik who is steeped in tradition, would without a doubt, know the Keres-Botvinnik game, yet he too falls for a similar strategic trick! As they say in Tamil (தமிழ்) ஆனைக்கும் அடிசறுக்கும் which means 'even the mighty elephant can slip'. To err is human of course and this makes the game even more interesting and lovable for us as amateurs. The way Meier conducted the rest of the game was impeccable and a lesson in dealing with these kinds of positions.

This familiar (for us, now!) retort sort of refutes White's strategy. If only Black had also castled earlier, White's position would have been absolutely fine and one could even say that White's chances of getting an attack on the kingside would be faster than that of Black on the queenside. However, that one unplayed move (castling of Black) is the key feature of the position and tilts the position overwhelmingly in Black's favour. 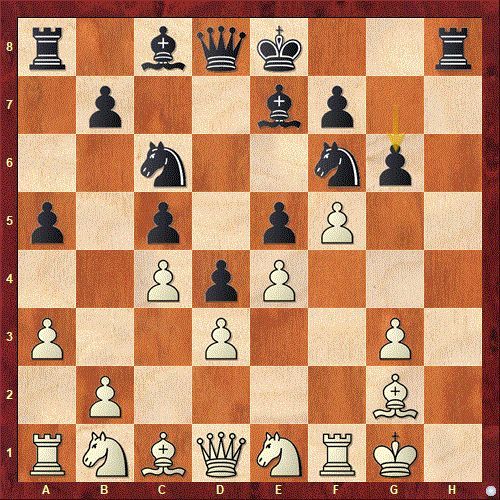 Black relentlessly uses his chance to open up the position against White's king and outplayed his mighty opponent thoroughly and won a very fine game. Kramnik is in the same sort of crisis that Keres came under and could not save himself either.

The rest of the game with Meier's fine comments have been added as a replayable link along with the full game of Botvinnik- Keres with my comments.

1. When the centre is closed, never castle without reflection when opponent has not yet shown his hand.

Sources: Botvinnik's Critical and Analytical Works, Keres' book on the World Championship 1948 and Meier's annotations from the Chess Base Magazine.

ChessBase India is happy to see GM Sundararajan Kidambi writing his sixth post of the year 2022 in his blog "Musings on Chess". Knowing what an encyclopedic knowledge the grandmaster from Chennai possesses, I think we are in for a treat! One can only hope that Kidambi continues writing regularly! We will keep reminding him about it! We are awaiting to read his first post of the year 2022 and be enriched.