How Ding Liren fought the "Caruana" virus (in pictures)!

"I hear and I forget. I see and I remember. I do and I understand!" - This famous proverb is true for all chess players. Hence, with this article we would not only like you to see, or hear or read, but to actually experience what happened with Ding Liren in the third round of the Candidates 2020. We want you to put yourself in Ding Liren's shoes and sit against one of the greatest opening innovators of our era - Fabiano Caruana. What must have gone through the Chinese number one's mind. What must he be thinking when Caruana unleashed a beast like novelty on him. We try to take you through the entire action in this novel article written by IM Sagar Shah along with the pictures provided by Lennart Ootes and Maria Emelianova.

Rule: To read the article - put yourself in Ding Liren's shoes.

You are one of the favourites of the Candidates 2020 and you suffer two losses in two rounds. | Photo: Lennart Ootes
You are definitely not in a good mood and to make things worse you are facing the top seed of the tournament in round three. | Photo: Lennart Ootes
You come to the board early and write your score sheet. You have the white pieces for this crucial encounter. | Photo: Maria Emelianova
Your opponent arrives to the board and adjust's his huge green chair. You cannot help but notice the confidence on his face. Everyone in the tournament hall has the same green chair, but you don't really feel comfortable in the chair with wheels. You prefer the traditional stable chair. If not at the board, you at least want to feel stable while you sit. | Photo: Maria Emelianova
You open the game with 1.d4 and your opponent plays d5. | Photo: Maria Emelianova

The Slav is not part of Caruana's repertoire, but you think to yourself, "Fabi has come to this tournament with the aim of trying out new ideas. Didn't he play 4.f3 Nimzo against Alekseenko yesterday! He must be well prepared. Shall I play the Exchange Slav? Make a quick draw. Next is a rest day, can be back in good mood for remaining 11 rounds. Ah well, that's not my style. Let's go 3.Nf3." And then, six moves later, it arrives! "The Novelty!" 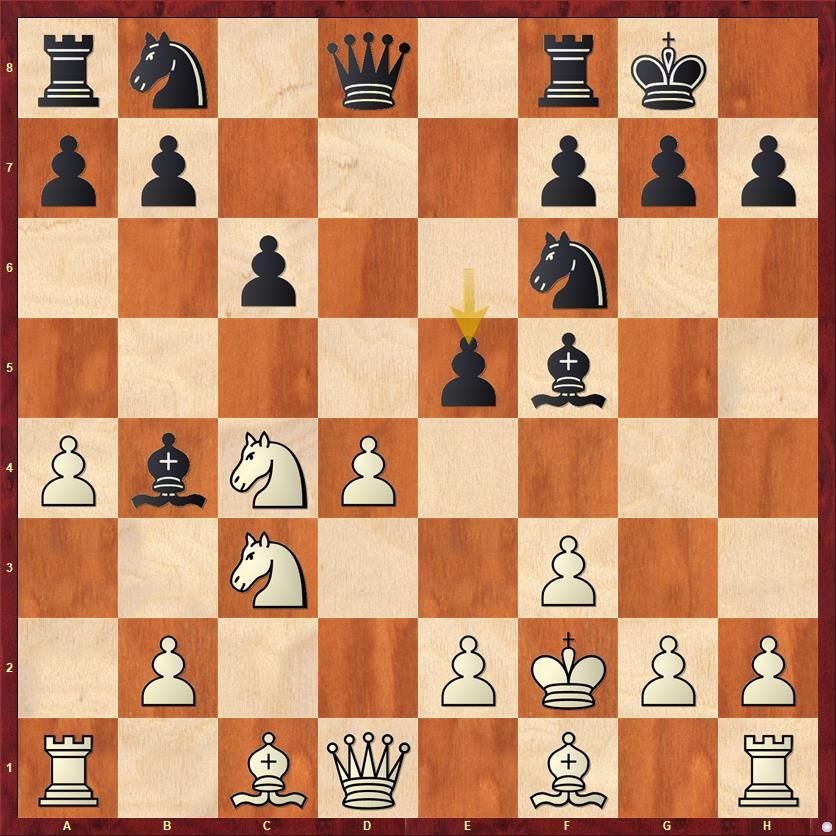 Never seen before, never analyzed before! 9...e5 comes as a shock to you. You can take the pawn in two different ways. What to do?
Your opponent has left you all alone at the board. He wants to show that he is confident and well prepared. | Photo: Lennart Ootes
People are coming to the board and watching you suffer! The novelty is not at all easy to refute and for every move you make your opponent comes back and lashes out his move! Oh my! Look at the clock, you are already an hour behind your opponent! | Photo: Lennart Ootes
You bring up all your focus. Third loss in a row would be a total catastrophe. | Photo: Maria Emelianova 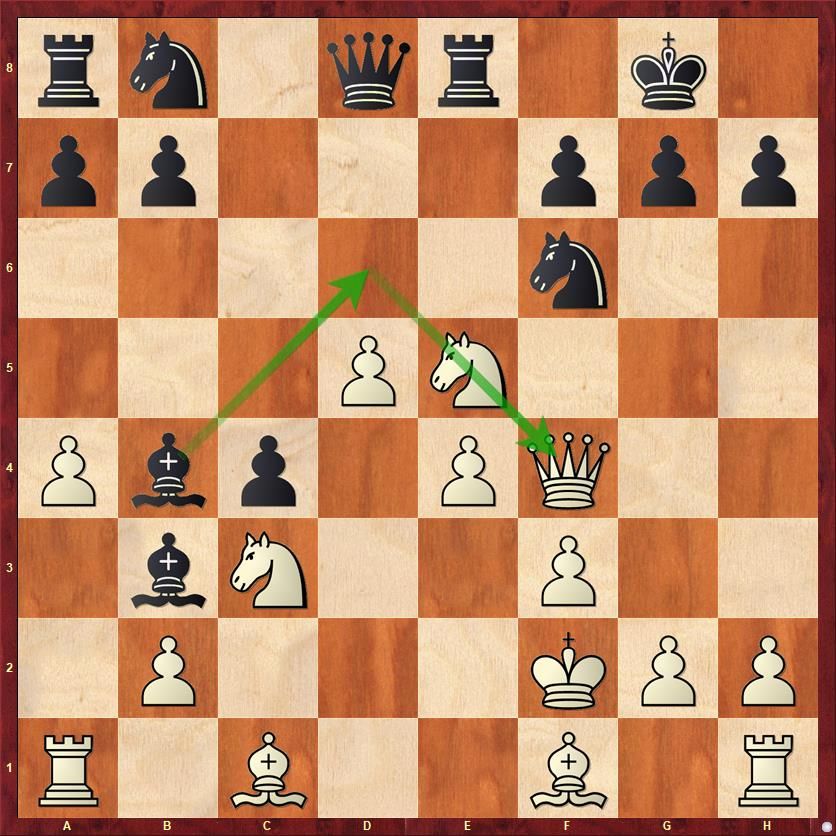 Another pawn is sacrificed. This time he wants to get his bishop back to d6. Well, if you have said A, you must say B - Let's take another pawn Nxc4.
You look at the empty chairs in the spectators area and think about all the people who went out of their way to help you prepare for the Candidates. "I have to fight harder!" | Photo: Maria Emelianova 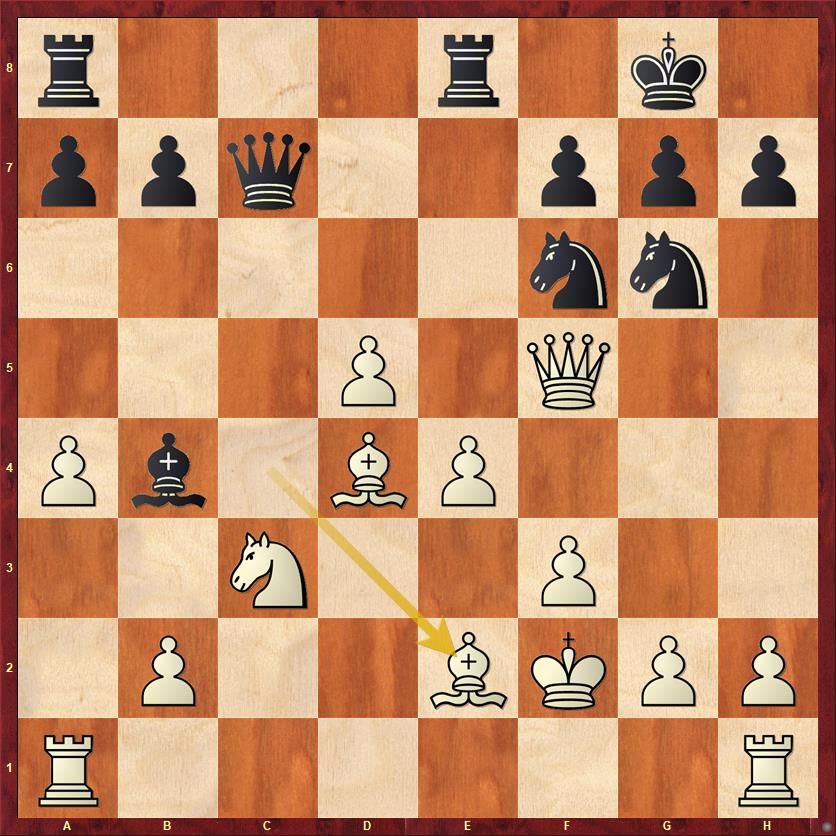 "I have two extra pawns and everything looks great. But I don't like my queen on f5 and also the king on f2. Black can sacrifice a piece at any moment and rip apart my position. I have to be careful." 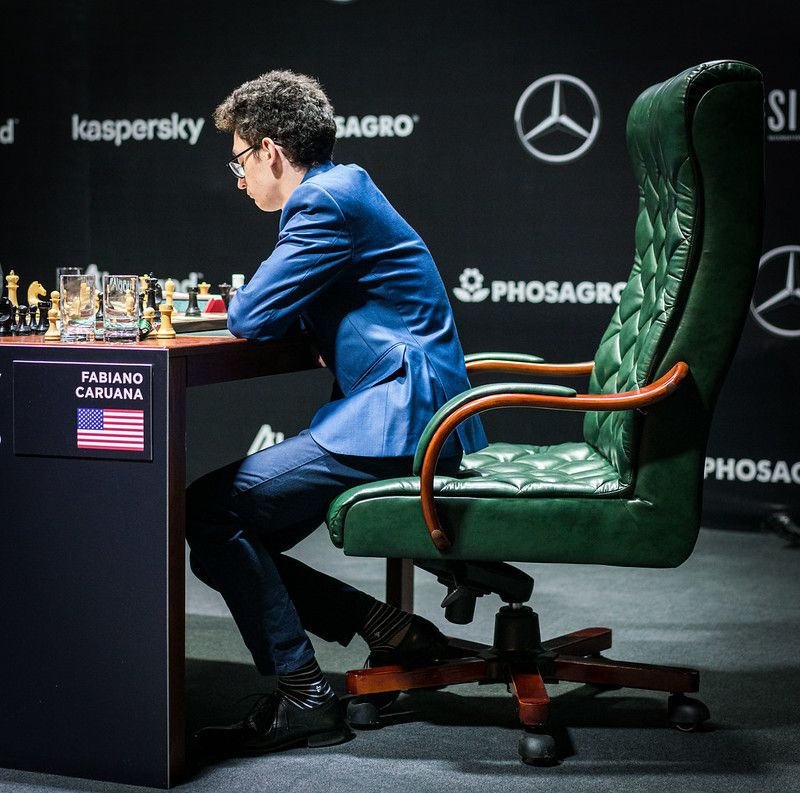 Your opponent is on the edge of his chair. Finally you have managed to make him think. | Photo: Lennart Ootes 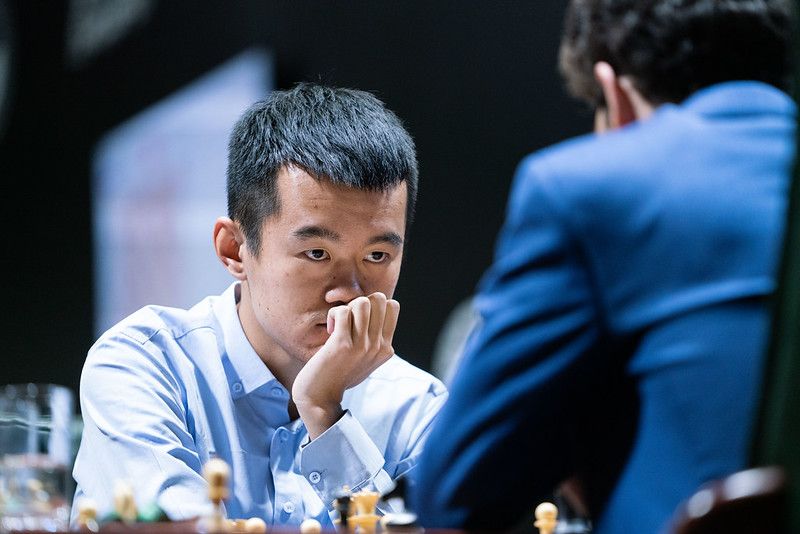 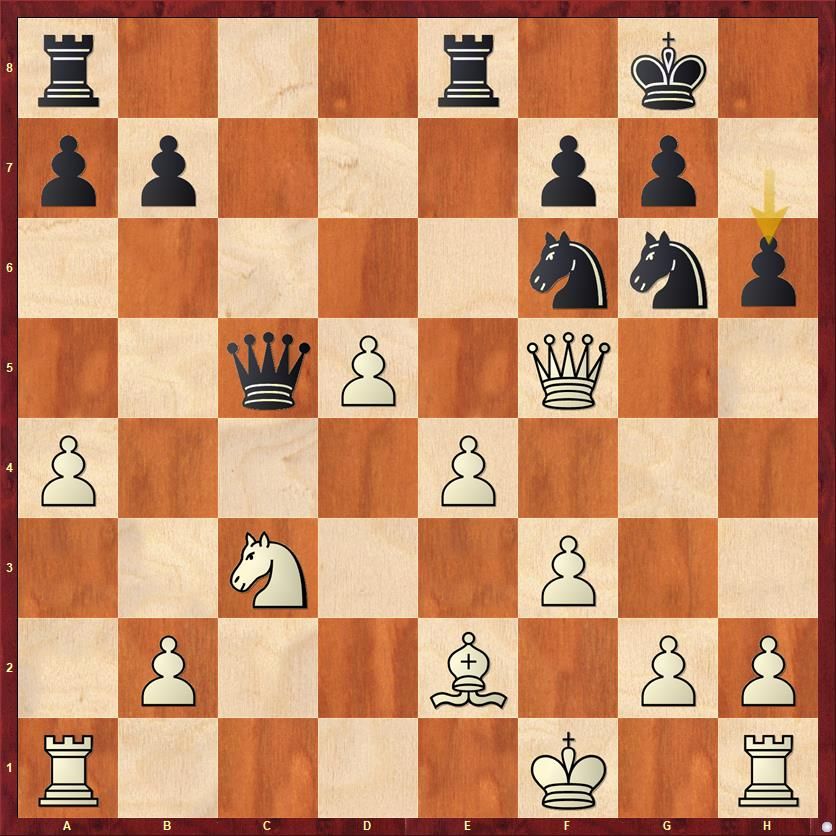 Ha! ...h6. This is an admission by your opponent that he is not so happy with his position. "Let me now centralize my rook with Rd1 and later get my queen back via h3-g3-f2. I should be able to get him."
You have to make sure that you make it to the 40th move without any accident. Once 30 minutes are added, it will be a cakewalk. | Photo: Lennart Ootes 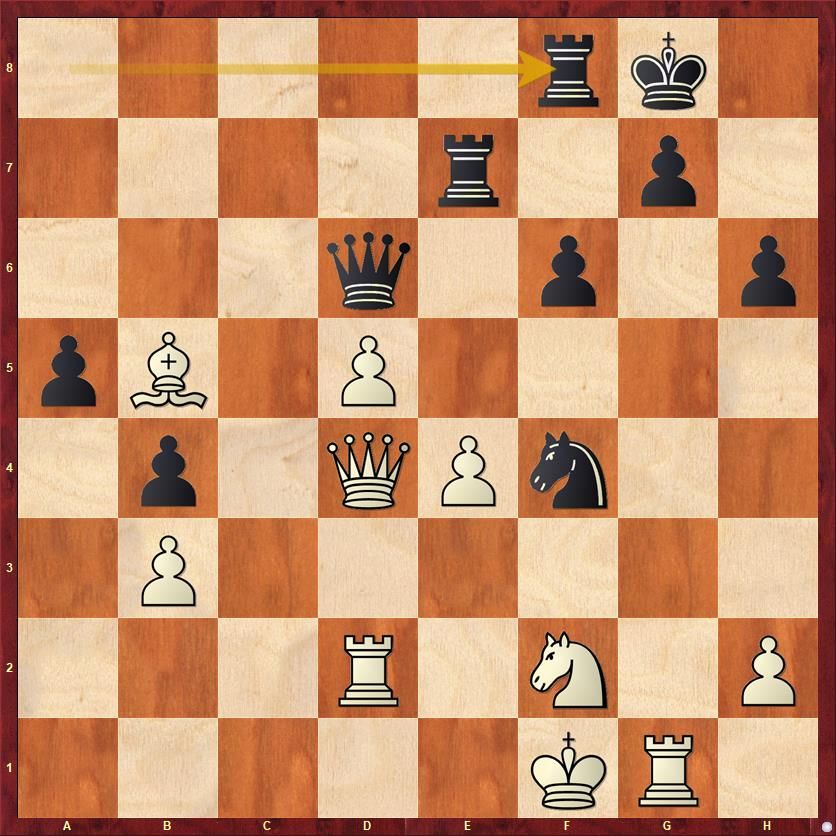 Interview with Ding Liren after his win over Fabiano Caruana

Anna Burtasova (AB): Ding, congratulations on your victory today. It seems something went horribly wrong for Fabiano in the opening. What do you think about it?

Ding Liren (DL): Well, I don't think so since he played so quickly and I was down in the clock by more than 1 hour after the opening. I don't know exactly where he went wrong. It seems his compensation was very big. After h6 it was a strange position and I was very worried, although I didn't see a clear way for him either. But he was very well-prepared so I thought there might be something wrong with my play. He made a few slow pawn moves which allowed me to place my queen on a better square after which it was just completely winning for White.

AB: Would you say after h6 you felt you were much better or probably winning?

DL: No, no. Only after Qg3 when he didn't have too much counterplay, I thought my position was much better. 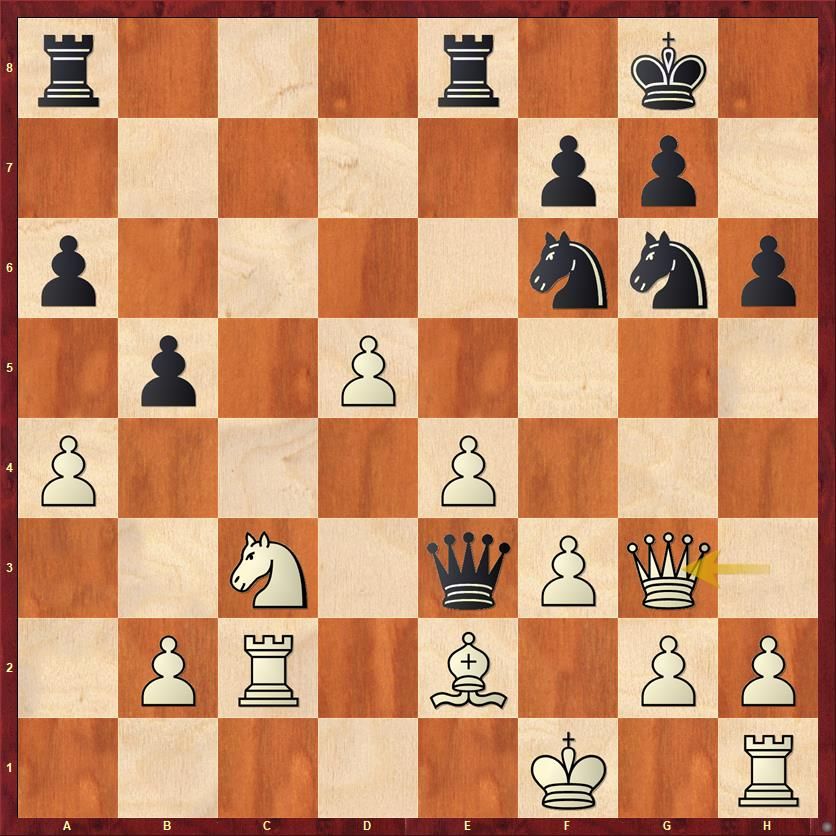 When Ding played Qg3, he could safely get his queen back to f2 and consolidate his position.

AB: You didn't start the tournament well but now you have scored your first victory. What did you do yesterday to pull yourself together for this game?

DL: Yesterday I prepared very hard. Not for this game in particular. I just tried in general to recover and be in my best shape like in the past. Still I got frustrated out of the opening since he played so quickly but slowly he lost his counterplay and at that point I was happy with my position.

AB: Who supports you here? Do you keep in touch with your family and friends from back home?

DL: Yes of course. My friends and coach give me a lot of encouragement to keep fighting. Today when he played the Slav, I thought for one moment to just play cxd5 and make a quick draw. But then I thought that's not my style and I should press for more. 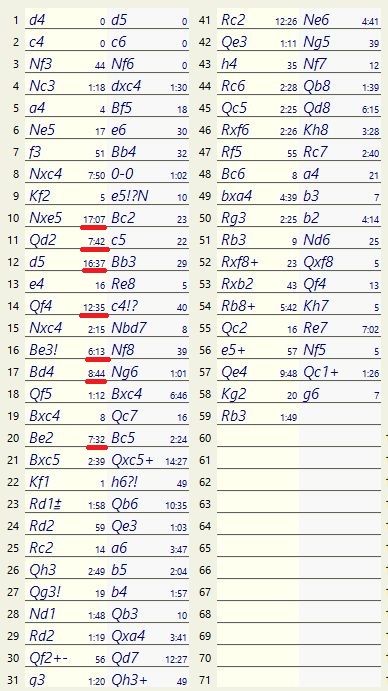 From move no.10 to 20 Ding Liren took a total of 80 minutes out of his stipulated 100 minutes. That meant, he only had 20 minutes to make the other 30 moves to reach the time control. Underlined in red are the moves where Ding Liren took more than 5 minutes for a move.

GM Vishnu Prasanna tells us where was it exactly that Caruana went wrong?

The entire round report along with analysis of three other games will be done in a separate article.