It is risky, and it's true that Coronavirus threat has cancelled just about every major event in the world in the month of March. Yet, for a chess fan, who is at home and is unable to travel to tournaments, there could not have been a better news. Candidates 2020 taking place as planned means you get 20 days of high quality chess filled with drama, action and more. In this article let you know about the journey of all the participants in reaching Yekaterinburg, the venue of the event. We also bring to you the details of the coverage planned by ChessBase India during the duration of the Candidates 2020. It includes daily live updates, live show, detailed reports, best game of the day analysis videos and much more! Game 1 begins on 17th of March, 4.30 p.m. IST.

After a lot of drama and excitement we are finally going ahead with the Candidates. To tell you the truth, every morning I would wake up and check the FIDE news to see if the tournament has been called off because of the Corona virus outbreak. But FIDE's resoluteness and the non-interference (at least until now) by the Russian authorities has ensured that the Candidates is going to move forward as planned! The one major casualty we have had until now is Radjabov pulling out which gave MVL the chance to play his first Candidates!

If you are a chess player and a chess fan, the Candidates tournament taking place is excellent news! All the tournaments that were going to take place not just in March but also in April have been cancelled. You are forced to sit back home from the fear of Corona virus. In such a situation, it would be the most ideal to have eight of the best players in the world fighting it out in a tournament of such great import.

Anish Giri on his way to Yekaterinburg made the following post on Instagram, "On my way to the Candidates tournament! Feeling. Completely. Ready."
MVL posted this picture with his long time friend and second Etienne Bacrot, preparing for the event. He is making use of the Thinkers Publishing books for his preparation!

Ding Liren made it safely through his quaratine period and Wang Hao also reached in time from Tokyo, where he was staying from the last couple of months. The preparation of the Chinese players was definitely affected due to the Coronavirus as they couldn't bring their team to work together in the manner that they had planned.

Fabiano Caruana had the most difficulties in reaching Russia:

My flight to Russia got canceled (without the airline notifying me), but working on a new solution to get there in time.

Update: canceled my flight through Czech Republic as the country declared a state of emergency today. Flying to Moscow in 2 hours

Saw @FabianoCaruana in the hotel lobby. He offered me a handshake. I understand we are competitors here, but one still expects some sportsmanship and common courtesy. #Candidates2020

From the point of view of players who have had to face the least number of difficulties reaching Yekaterinburg are definitely the three Russians - Grischuk, Nepomniachtchi and Alekseenko.

In general there is no point in making predictions for the event. The opening ceremony will take place today and the games will begin from tomorrow, so we will be on our way! However, as a chess fan, the first thought that comes to my mind when I think about the Candidates event is - who will win it and challenge Carlsen for the ultimate crown! It seems that Caruana has the greatest chances here mainly because he has gone through the grind last year and knows what it feels like playing under immense pressure. As Fabi has mentioned before as well, there is a big difference between playing at the super tournaments, and the Candidates. The pressure that you feel is vastly different. Especially because the stakes are so high. In Candidates 2016, Anish Giri scored 7.0/14 with all 14 games ending in draws. In 2018 he helped Vladimir Kramnik as a second. In 2018, it was Ding Liren who played out 13 draws! To me it seems both Anish Giri and Ding Liren will be much stronger than they ever were at the Candidates with all their experience.

Will we see a super strong Anish Giri | Photo: Chessfunz

And the same goes with Alexander Grischuk as well. He has been playing at the highest level for nearly one and a half decades now. He was part of the World Championships in Mexico in 2007, also reaching the finals of the Kazan Candidates 2011, participating in the Candidates 2013 and 2018. In terms of experience, Grischuk has the most. But when you have played so many events and have not won any of them, there is a possibility to have some sort of a mental block as to what it takes to become the champion! But who knows, Grischuk might well surprise us.

MVL would have been the favourite to win the Candidates had he qualified via the normal routes and had got his normal time to prepare for the event. As he got to know about his participation only ten days before the event, it will be a battle between freshness and lack of preparation! I have a feeling that MVL is going to enjoy himself at the event and fight for the top spots right from the very beginning.

Nepomniachtchi, Wang Hao and Alekseenko are all playing the Candidates for the first time in their careers and will be the surprise packs of the tournament. With the other five players in the picture, it seems unlikely that they have a chance to win it, but then no one expected Wang Hao to win the Grand Swiss ahead of Carlsen and Caruana, nor did anyone imagine Alekseenko to be playing at the Candidates! Amongst the three, Nepomniachtchi definitely has more experience facing the top players and has played in several top level events.

The city of Yekaterinburg in Russia will host the event | Photo: FIDE

How is ChessBase India going to cover the Candidates?

We, at ChessBase India consider the Candidates from two point of views:

The viewers of ChessBase India should enjoy the competitive element - after all it's the biggest Round Robin event you can ever get, but at the same time we believe that the tournament presents itself a unique opportunity to learn and grow as a player. With this in mind we will be bringing you the following:

1. Live updates: We will be setting up a Live Games page, where you will be able to follow the games, along with live analysis and updates by IM Sagar Shah. You can also follow the ChessBase India social media handles - Facebook, Instagram, Twitter and YouTube Communities tab to keep getting regular updates.

2. Round-up Show: Every day at 10 p.m. IM Sagar Shah will be doing a Live-show along with a prominent Indian chess player on ChessBase India's YouTube Channel. The main aim of the live show would be to interact with the viewers on a personal level. To answer questions and make them understand the key moments of the day.

3. Daily reports: You will find extensive reports on our newspage - www.chessbase.in with all the drama annotated games, pictures and more.

4. Game of the day: There will be the game of the day analysis (PGN) as well as a video by top Indian players.

5. Opening Novelties and trends: On every rest day we will be having an article on the opening novelties that were played in the last 12 games (the rest day is after every three rounds). This will be done by Tanmay Srinath, who will be making use of the Fat Fritz program and trying to understand the subtleties in a position.

If you have any suggestions or ideas with regards to making the coverage better, please let us know in the comments section below! We promise to make the next 20 days memorable for you! 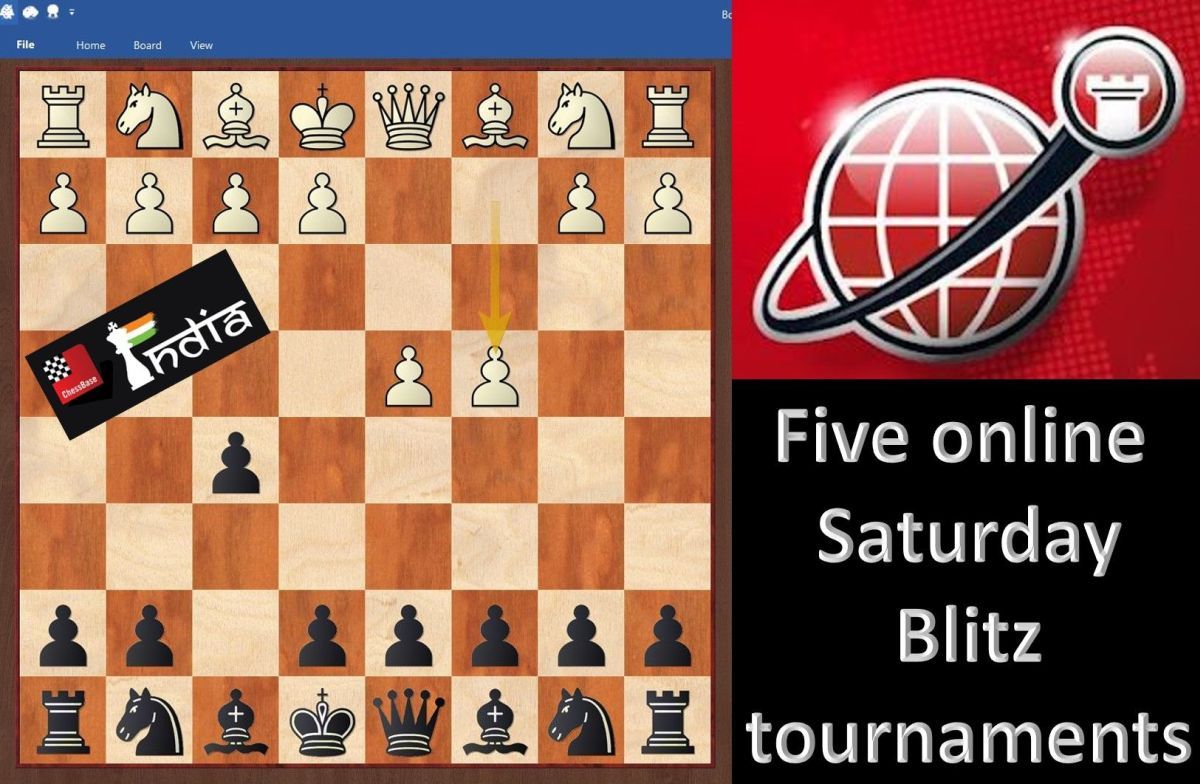 If you haven't enrolled yourself for the five online saturday blitz tournaments, read more about it and register for it from here.
Related news: