Anna Muzychuk got a winning chance against Alexandra Kosteniuk after the latter's exchange sacrifice was dealt properly, but due to time pressure Anna missed it and the game ended up in a draw. Mariya declined a threefold repetition against Goryachkina in the endgame and it ended up in a draw eventually. Kateryna-Nana's game was a marathon game of 80 moves before a draw was agreed in a rook ending, although Nana had a decent advantage in early endgame. Gunina defeated former Women's World Champion Tan Zhongyi in Petroff's Defence after the former used her double bishops so well that Zhongyi had to give up the exchange. Photo: Eteri Kublashvili

Only Gunina is victorious in round 7 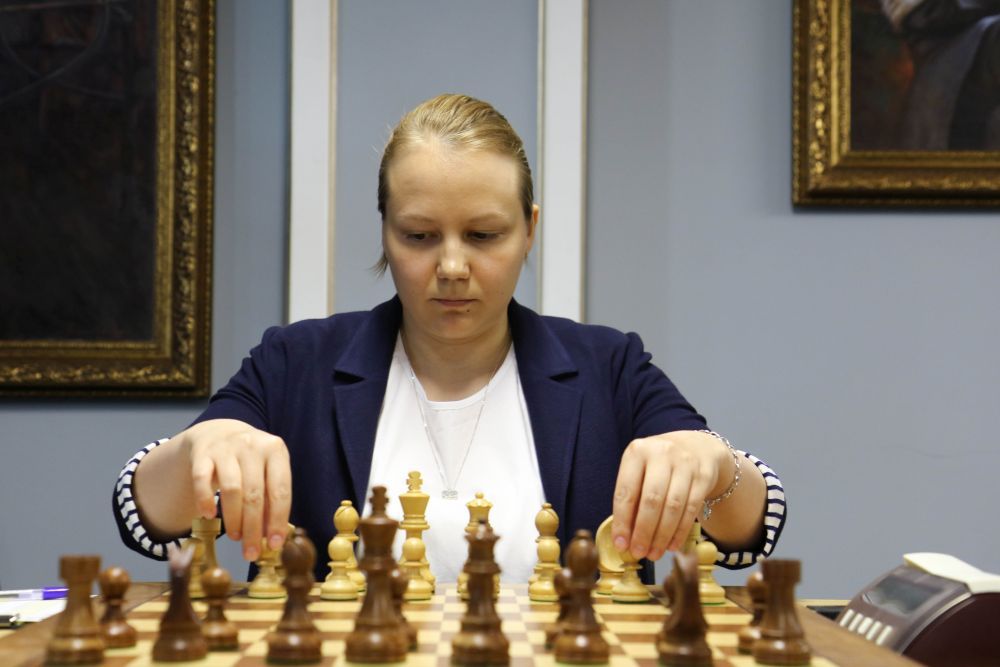 In Petroff's Defence, Tan Zhongyi had no difficulty equalizing with Black pieces, however Gunina executed a beautiful plan, maximizing the power of her double bishops in the endgame. 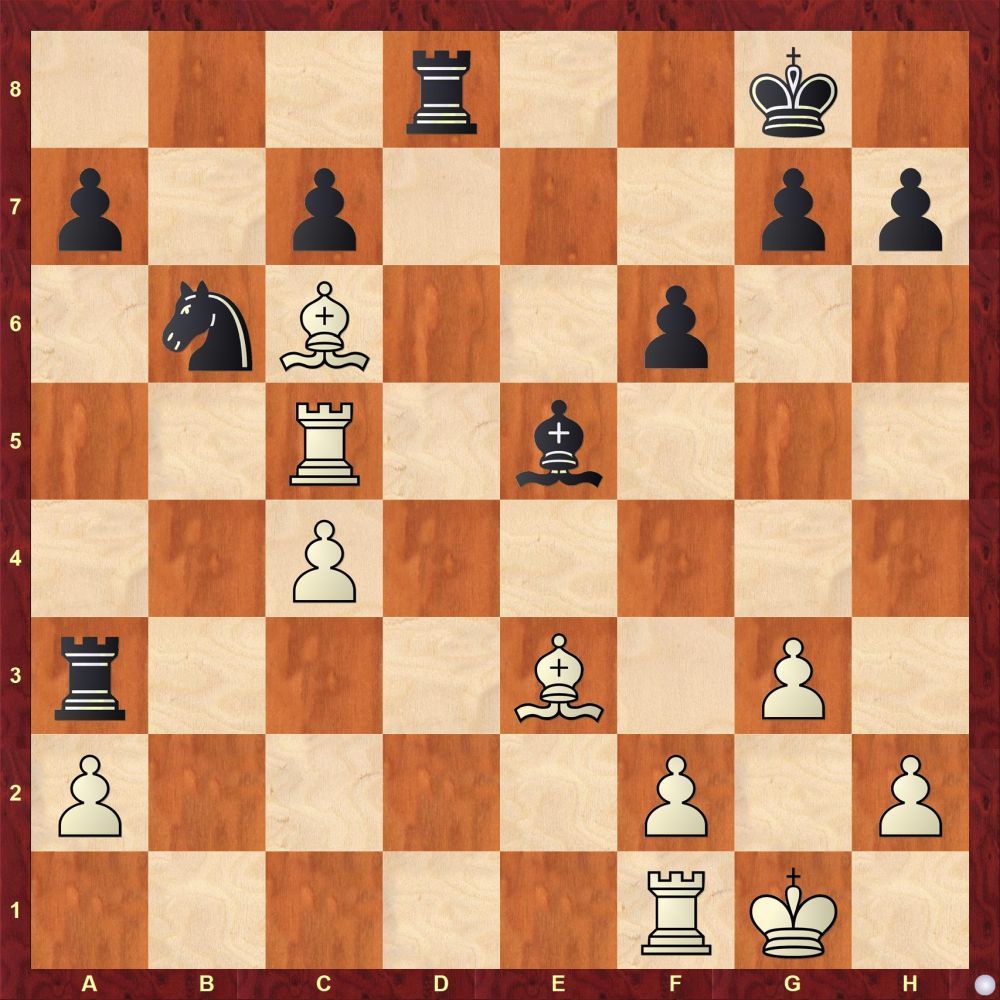 Computer will tell you the position is equal. However White has a beautiful plan in this position after 25...Ra3. Find it out 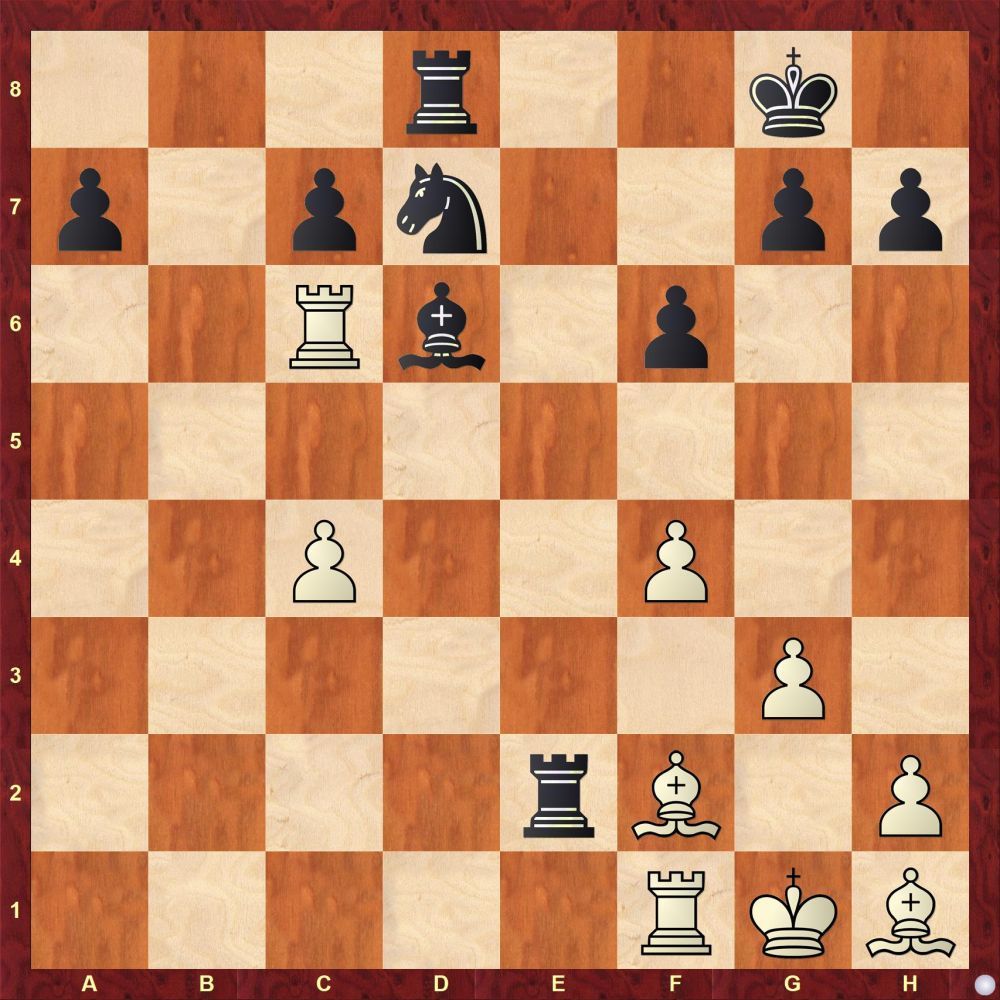 It is time for White to deliver the final blow 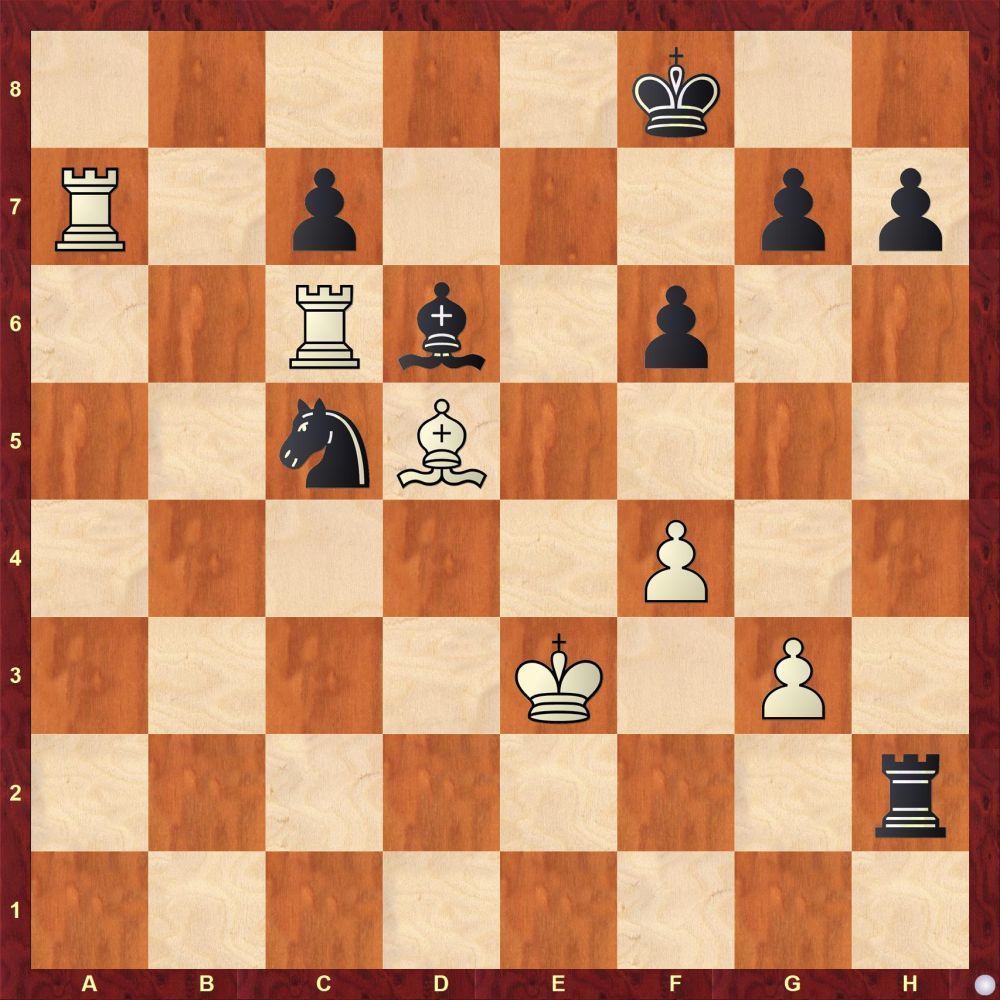 It is evident that White has an advantage here, but White must do what needs to be done. Find out the best continuation for White here. 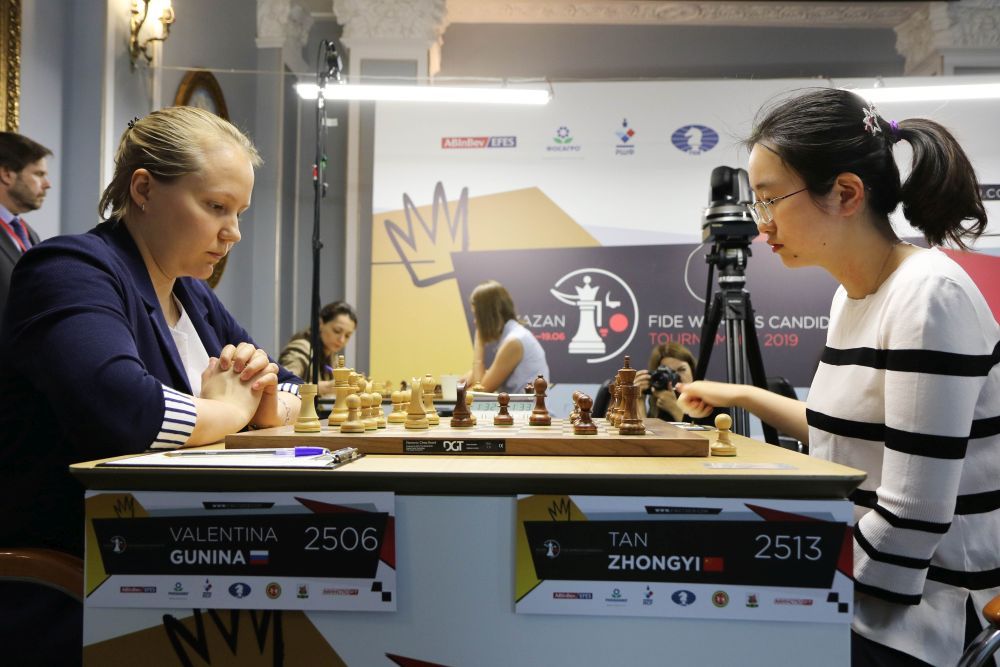 Gunina got the better of Zhongyi | Photo: Eteri Kublashvili
Valentina Gunina analyzes her game with Elisabeth Paehtz after the completion of it | Video: FIDE Chess 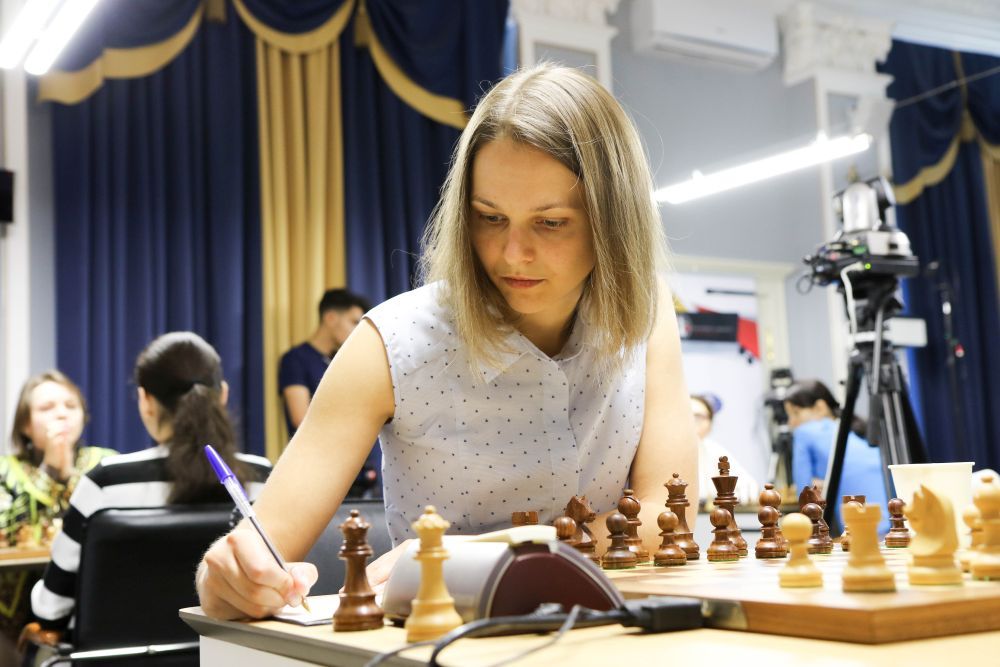 Anna Muzychuk would have liked to score her second consecutive win of the tournament against Alexandra Kosteniuk | Photo: Eteri Kublashvili

Anna was surprised by her opponent's 19.Ba4 as according to her, "It wasn't easy to find a solution". 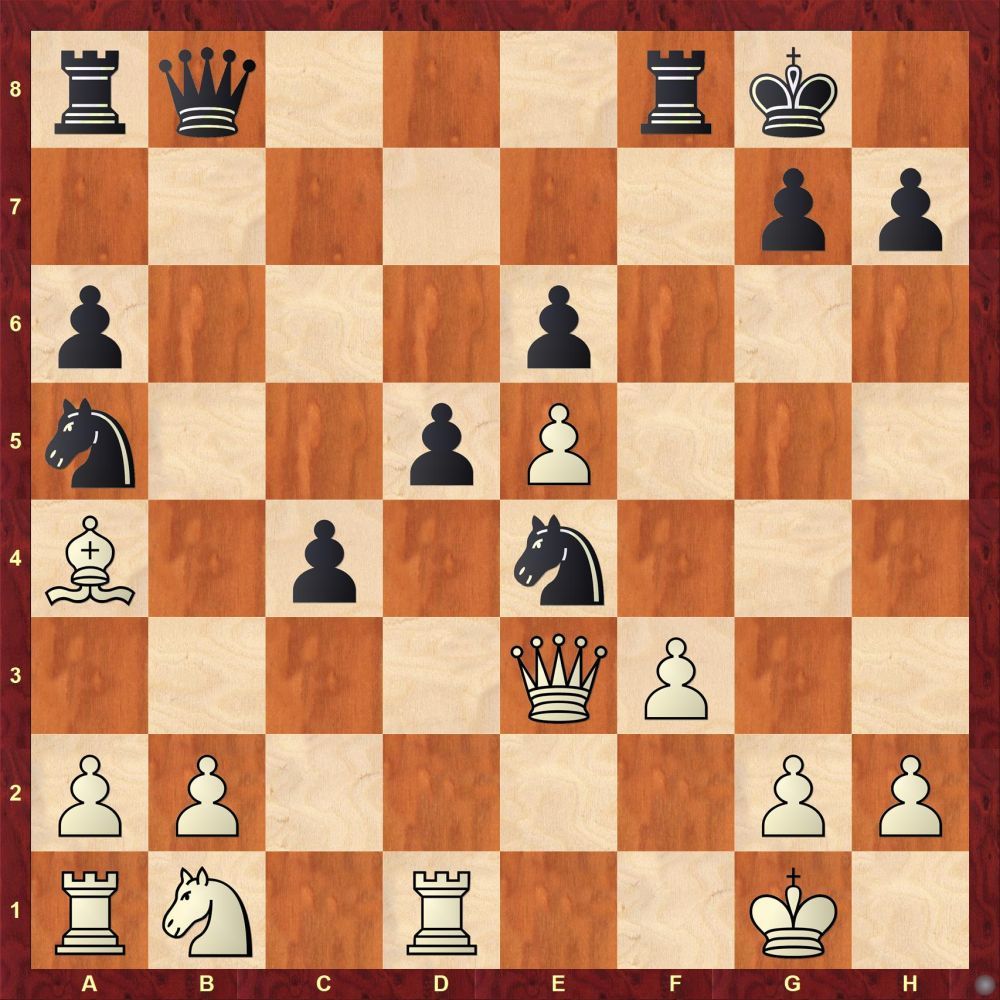 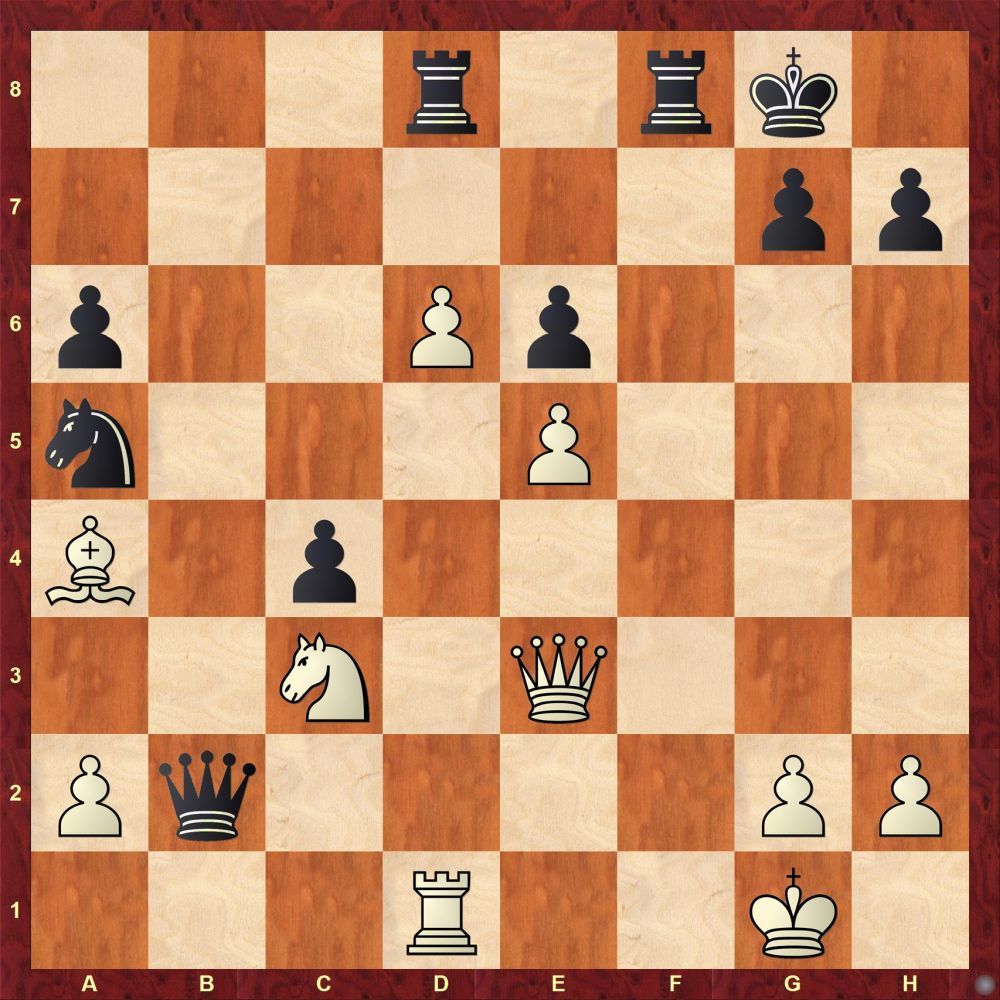 According to Anna, 23.d6 made the position quite uncomfortable for Black 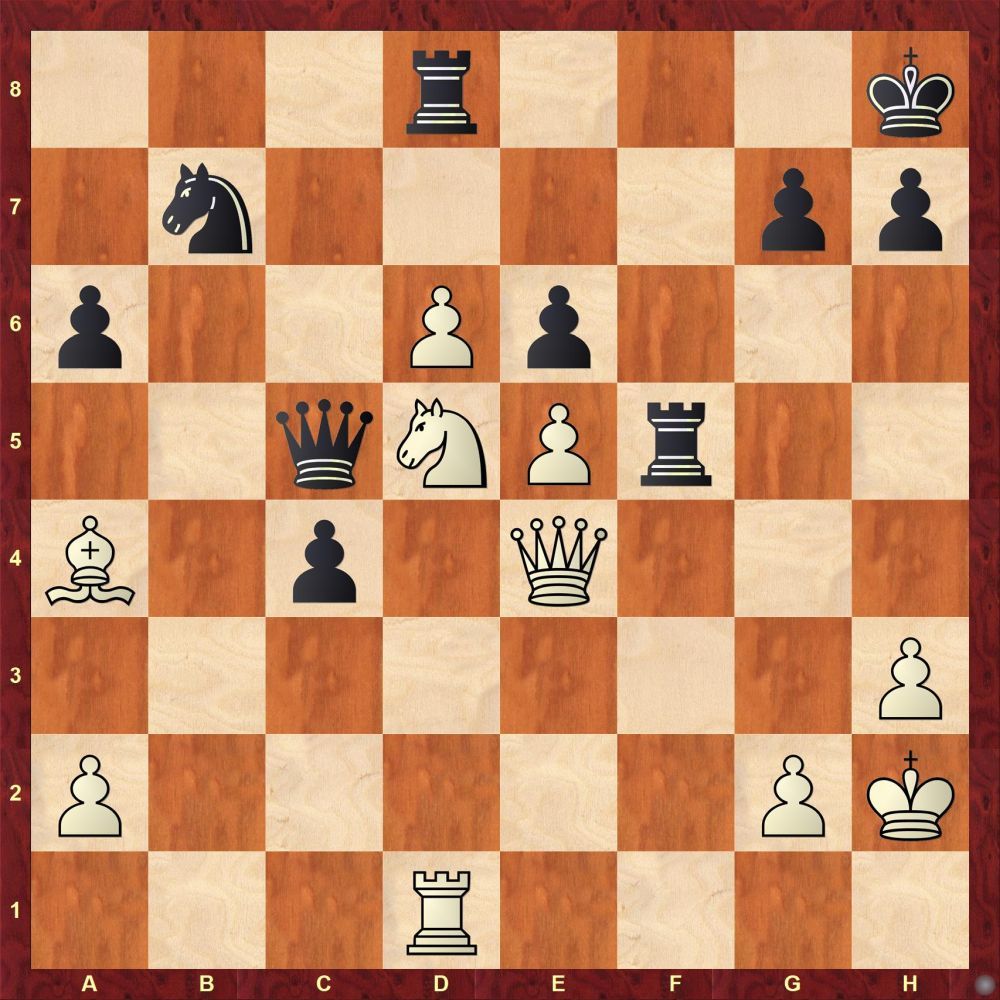 Kosteniuk was trying to complicate things with 28.Nd5, but it gave Black the winning opportunity. Can you find it? 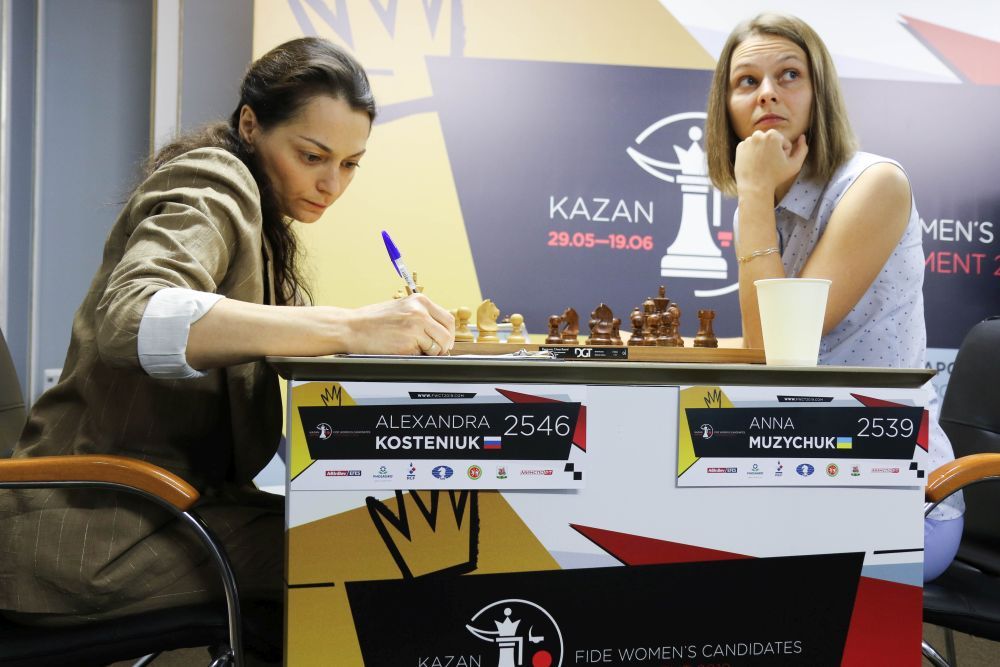 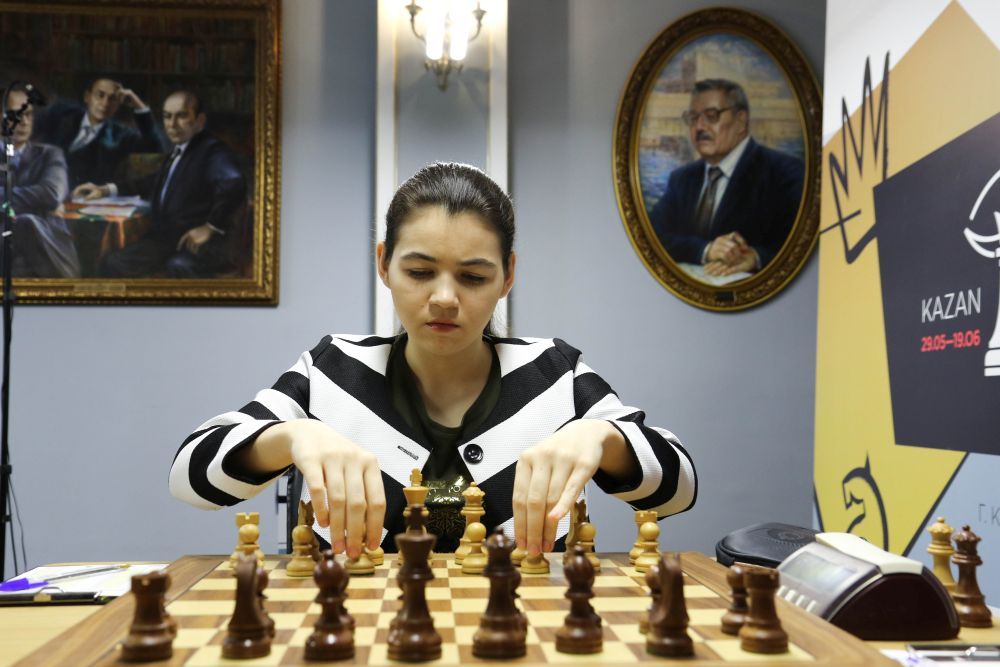 Goryachkina seemed the most vulnerable against Nana | Photo: Eteri Kublashvili

Goryachkina-Mariya ended up in a draw after a prolonged endgame. However, Mariya almost had a half chance which she could have taken. 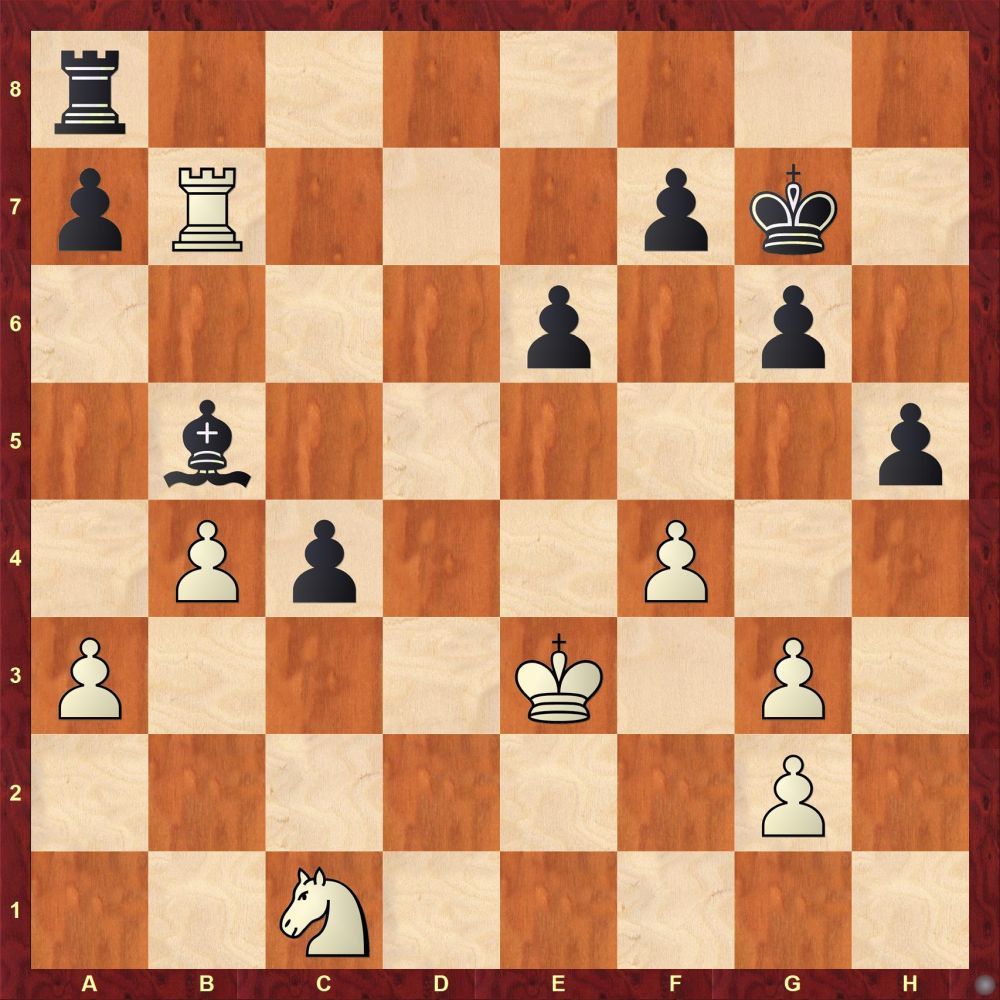 Mariya decided to give up the c4 pawn for the g2 White pawn when she played 34...Bc6. What else can Black do here? 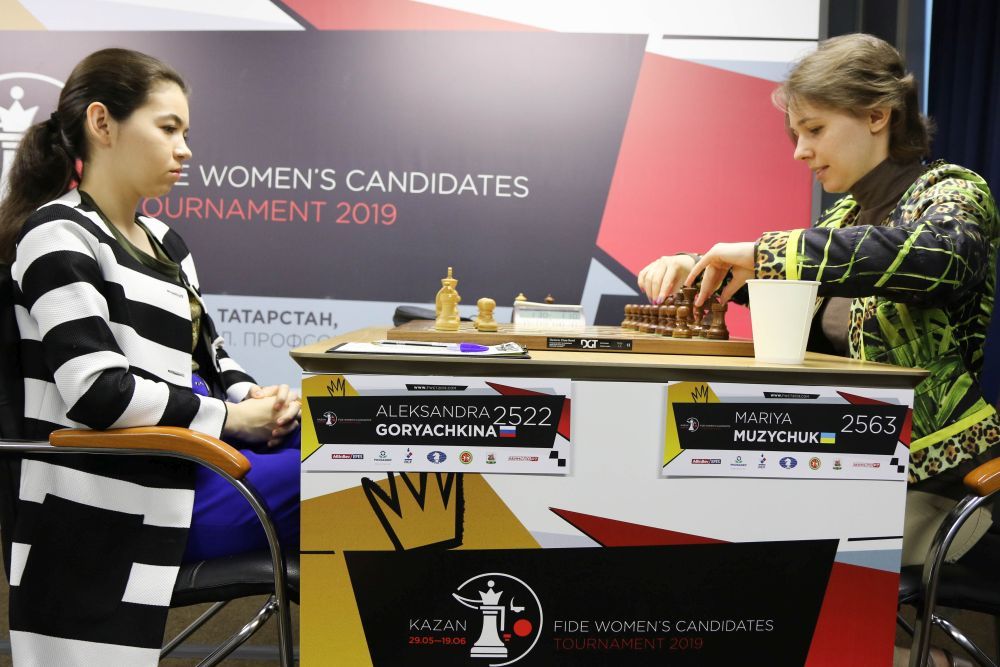 With this draw, Goryachkina still maintains a 1.5 point lead over the competition | Photo: Eteri Kublashvili 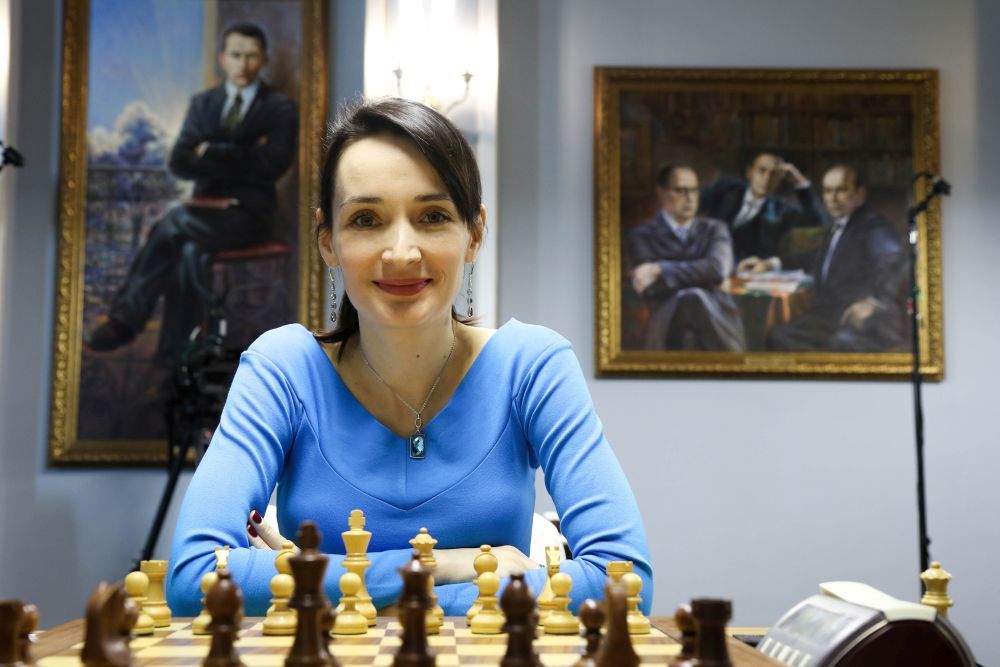 Kateryna Lagno got into slight trouble but she managed to salvage a draw in the longest game of the day | Photo: Eteri Kublashvili

Nana thought that she had a very good compensation when she sacrificed a pawn. 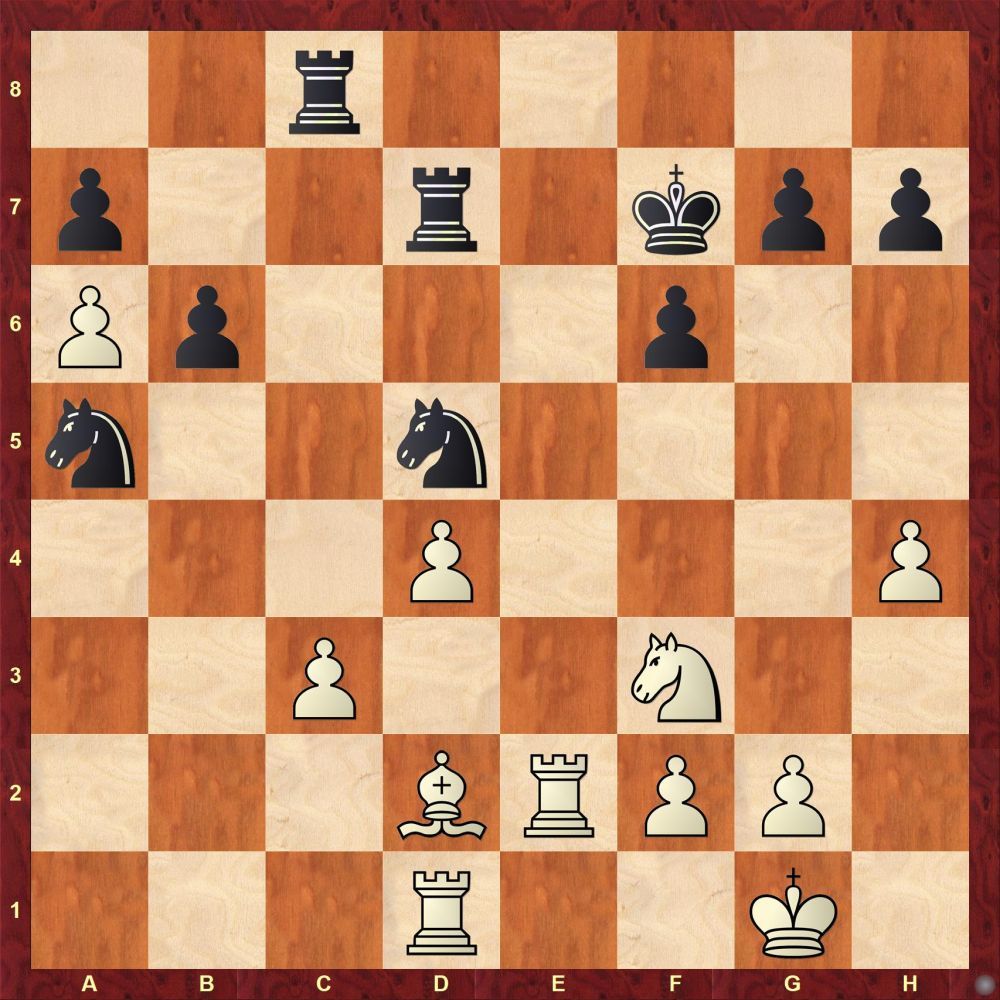 Nana thought Rc4, Ra4,Nc4,b5 would be the ideal position for Black, so she played 26...Rc4 here. Can you find what felt she should have played here instead of Rc4 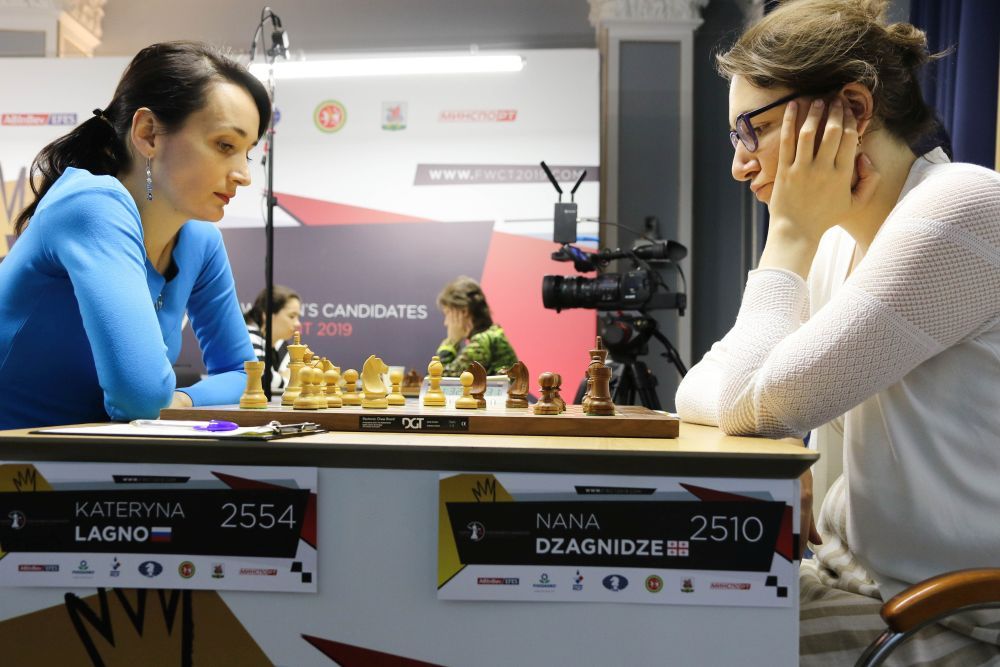 Both Lagno and Nana wanted to win but it ended up in a hard fought draw | Photo: Eteri Kublashvili
Kateryna Lagno and Nana Dzagnidze talk about the game, the Candidates tournament and more | Video: FIDE Chess