The players’ hunger for the Over The Board tournament after a gap of 20 months was evident from the massive turn-out for the 3rd Hyderabad Open and 4th Hyderabad Below 1600 FIDE Rated Chess Tournaments, organised by Marvel Chess Academy from 6th to 10th and from 11th to 13th November 2021 respectively. Fifth seeded international master Saravana Krishnan P of Karur Vysya Bank Tamil Nadu won the open tournament, scoring 8.5 points, conceding only one draw to IM Himal Gusain of Chandigarh. Check out a beautifully annotated game shared by the winner, IM P Saravana Krishnan. Photo: R Anantharam

Both IM Saravana Krishnan and Md Reyan scored an identical 8.5/9 each to win in Open and Below 1600 category respectively. While Saravana made a double hat-trick before scoring a draw, Ten-year-old Reyan scored eight consecutive victories before drawing his final round game as it was enough for him to secure the first position. 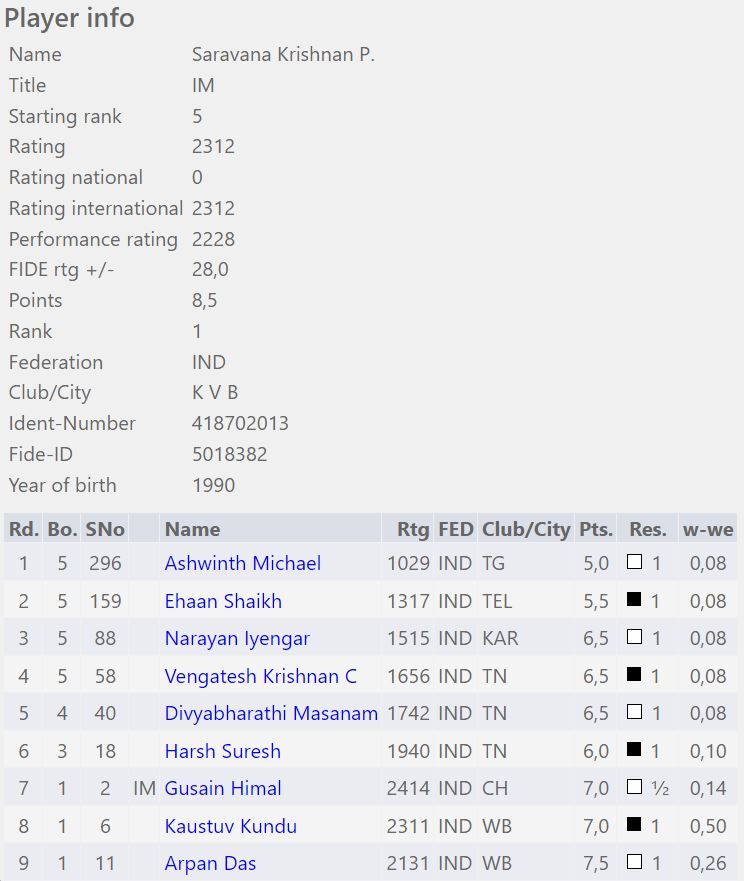 Ten-year-old Md Reyan of Bihar created history by winning with the Below 1600 tournament, with consummate ease.

Three players IM Ratnakaran of Southern Railways, Dhananjay of Chhattisgarh and ICF GM RR Laxman tied for the second to fourth place and finished in that order, based on their tiebreak scores. 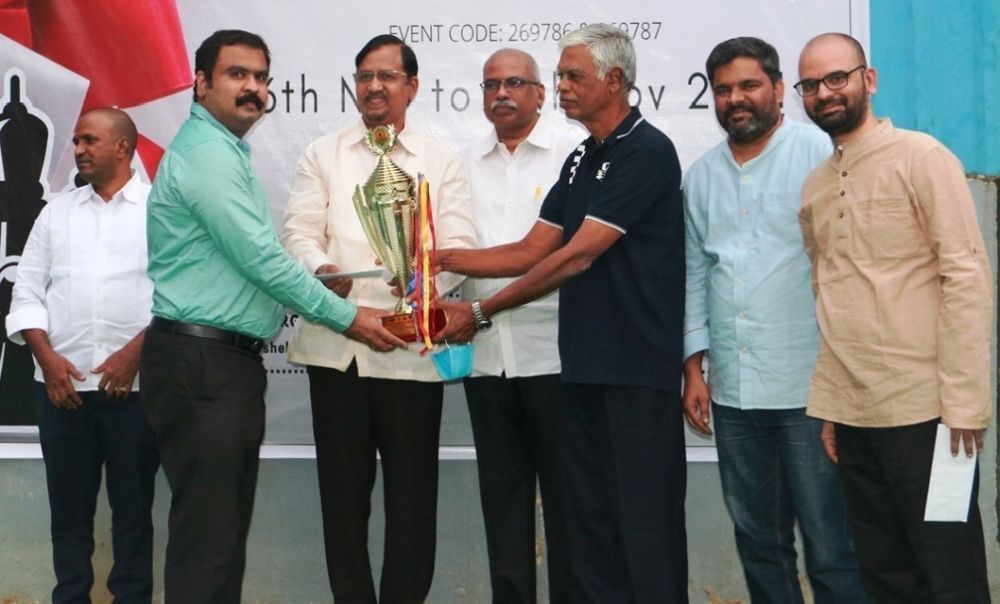 Ratnakaran of Southern Railways was the runner up in the Open tournament
Dhananjay of Chattisgarh had a good tournament winning the third position. Top three rankers of the Open tournament. KS Prasad, President of Telangana SCA is at the left of Saravana and Ratnakaran is flanked by Mr. Sateesh Kumar, Chairman of the Joy International School

Two consecutive draws in the fifth and sixth round against very low-rated players had a telling effect on the Buchholz score of RR Laxman, pushing him to fourth place. 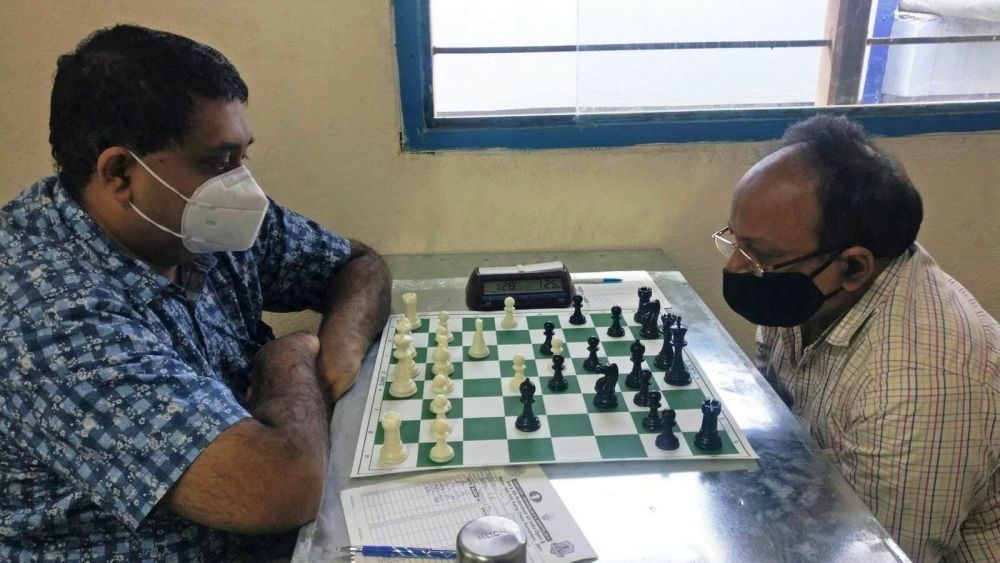 Laxman was held to a draw by Tamil Nadu youngster Arnav Maheshwari, which was a setback for him in the fifth round. A similar situation to the other Railways player Ratnakaran, against Arpan Das of West Bengal, in the sixth round. It resulted in Saravana Krishnan, Himal Gusain and Kaustuv Kundu (not the IM) of West Bengal to score six wins in six rounds. As Saravana and Himal drew against each other, Kaustuv emerged the sole leader by beating CM Kushagra Mohan of Telangana. Saravana took Kaustuv on stride in the eighth round, but Himal lost unexpectedly to Utsab Chatterjee of WB, paving way to Saravana’s success. 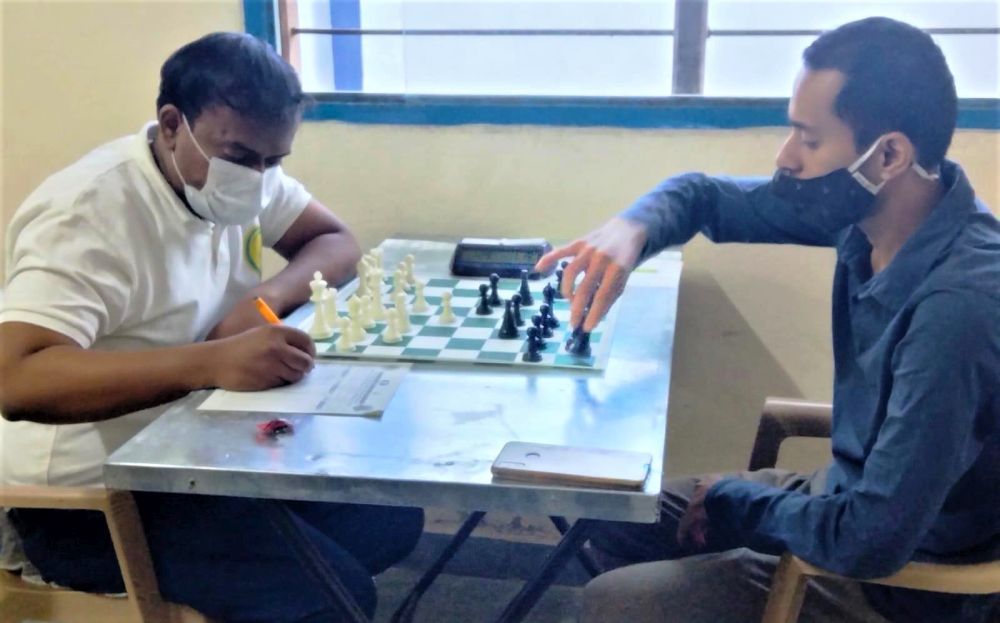 IM Saravana Krishnan Vs IM Himal Gusain was a draw

An interesting game of Saravana, annotated by himself

The runner-up K Ratnakaran accepted the draw against Arnav Maheshwari of TN in a slightly better position.

A total of 550 players including a GM and three IMs participated from various states across the country, between 6th to 10th November 2021.

In the Below 1600 category, the ten-year-old boy Md Reyan of Bihar scored eight consecutive wins and settled for a draw in the final round to create an astonishing record. His stint with the trainer from Ukraine has paid rich dividends. The 2011 born boy has gained 170 rating points from this tournament.

Hriday Panchal kept pace with Reyan until the sixth round and had to suffer defeat against the champion in the seventh round, but managed to climb up to score eight points.

The venue was Joy International School, Miyapur, Hyderabad, the management of which helped the organisers Rajashekar Bhagavatula and Ms. Kranti Lakshmi in a big way.