16-year-old Aman Balana and 13-year-old Lakshmi Charan Naidu G scored an unbeaten 8/9 each. Rajasthan's very own Aman won Winter Cup Below 1600 Rating Lakecity Tournament 2022 due to better tie-breaks. Lakshmi (AP) was second overall. However, he won the first prize in Rating category 1200-1399. Their penultimate round encounter against each other ended in a draw. Five players scored 7.5/9 each. Out of them, Raj Prakhar (HAR) secured the third place overall. Raj and Manan Goyal (HAR) were awarded second and third prize in the Open category. Total prize fund of the tournament was ₹1500000. The top three prizes were ₹111000, ₹71000 and ₹41000 along with a trophy each. A total of 173 prizes and three prizes above ₹100000 were up for grabs. The tournament was organized in memory of Advocate Late Prem Chand Mogra. Photo: IA Vikas Sahu/Chess in Lakecity

Six players were at 7/7 each heading into the final round. Aman Balana (RAJ) defeated Harshit Dawar (MP) and Lakshmi Charan Naidu G (AP) defeated Ram Kumar R (AP). The game between Shreyas (DEL) and Md. Sameed (UP) ended in a draw. Thus, Aman won the tournament on tie-breaks and Lakshmi was declared the winner in Rating category 1200-1399. Harshit gained a staggering 159.6 Elo rating points, Lakshmi increased 105.2. 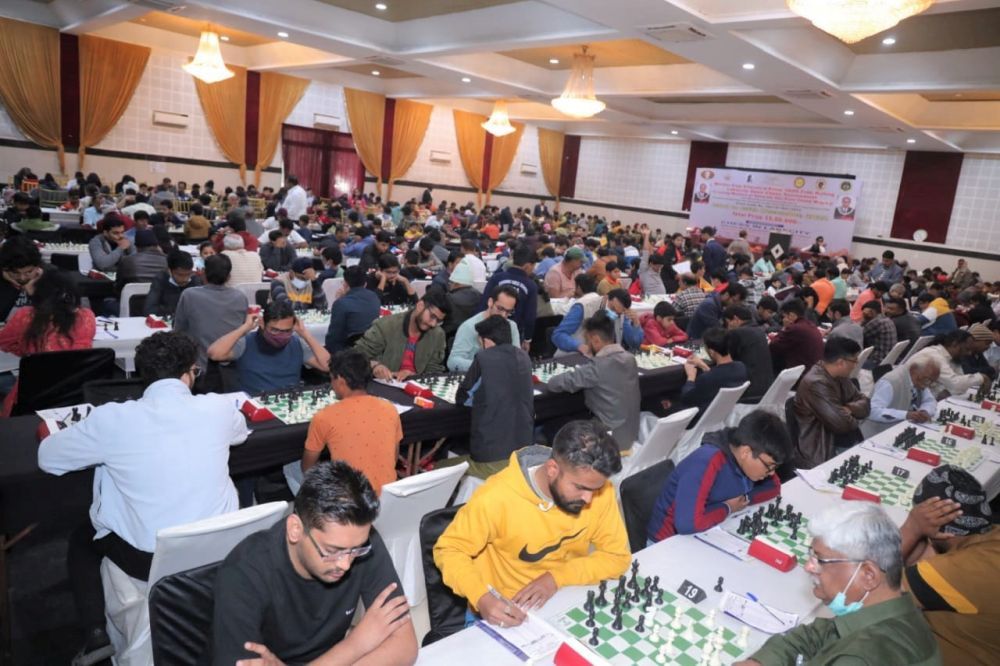 Thanks to the Tournament Director, IA Vikas Sahu of Chess in Lakecity for providing photos and information about the tournament.

A total of 397 players from various states across the country and one each from Australia, Canada, England, Nepal, Sri Lanka, Tunisia and USA took part in this event. The tournament was organized by Chess in Lakecity from 23rd to 25th December 2022 at Orbit Resort, Udaipur, Rajasthan. The nine-round Swiss league Rating tournament had a time control of 30 minutes + 30 seconds increment.