When two world class players are working with talented Indian youngsters in two different groups, the question that naturally comes to mind is - how is one trainer different from the other! On day one of the Microsense Kramnik Gelfand Training Program, IM Sagar Shah spent quite some time in both the sessions of Gelfand and Kramnik and came to the conclusion that it was like Fire and Ice! Gelfand was like Fire and Kramnik like Ice! Why does the author say so? What were the openings and positions discussed on day one of the training camp? Find out in this article! A first hand view of the biggest training camp taking place on Indian soil ever!

Just a floor separated the two, but the difference was huge! It was like "Fire" and "Ice" on day one of the Microsense Kramnik Gelfand Training program 2020.

It was decided that Vladimir would work with the younger batch...

...while Boris would tackle the seniors

But why fire and ice? Well if you entered Boris' classroom you could see the intensity in the way he spoke. He was loud, quick, and almost every word he spoke was done so with great emphasis. On the other hand, Kramnik is more easy going. His words have a flow to them and he doesn't try to over stress the importance of anything. It is also the way in which these two great players function on the board as players. While you always see Boris' face red with intensity and concentration during the game, Vladimir makes it look very simple. It's just how they are. Different, yet equally effective - just like Fire and Ice!

It's almost impossible to cover an opening as huge as the Sicilian in four days! But what Boris tried to do was not to acquaint the youngsters with each and every line. Rather he showed some inspiring games - some very recent ones of Carlsen, some very classical ones from the time of Geller. Also when Boris spoke about his own games, it was a treat to watch! He would talk about behind the scenes stories and it was fascinating for the kids to listen to them. A nice example was his game against Karjakin (diagram given later in the article) where he really felt that the position was completely winning for him, but later realized that there was simply no way to win in the game and eventually had to change his mindset to a draw. Boris would often open his own games database where he had his games analyzed. "I always like to analyze my games and put in my thoughts after it is over. Sometimes when I am too tired, I do it after the event, but I make it a point to put in all my thoughts and analysis. It would be the biggest mistake you could make, if after a game you would open a website and then check the moves which are marked in red (bad moves). The main thing is not to just know where you made the mistakes. More important is why you made them!"

Like sponges, these youngsters absorbed every little thing that Boris was talking about

While Gelfand had prepared his material beforehand, it was also interesting to note how he innovated on the go. While showing a particular variation, Gukesh mentioned that he had played a game in it. Gelfand immediately opened the game and went over it carefully. Surprisingly, he was able to find an extremely instructive position right there and then! 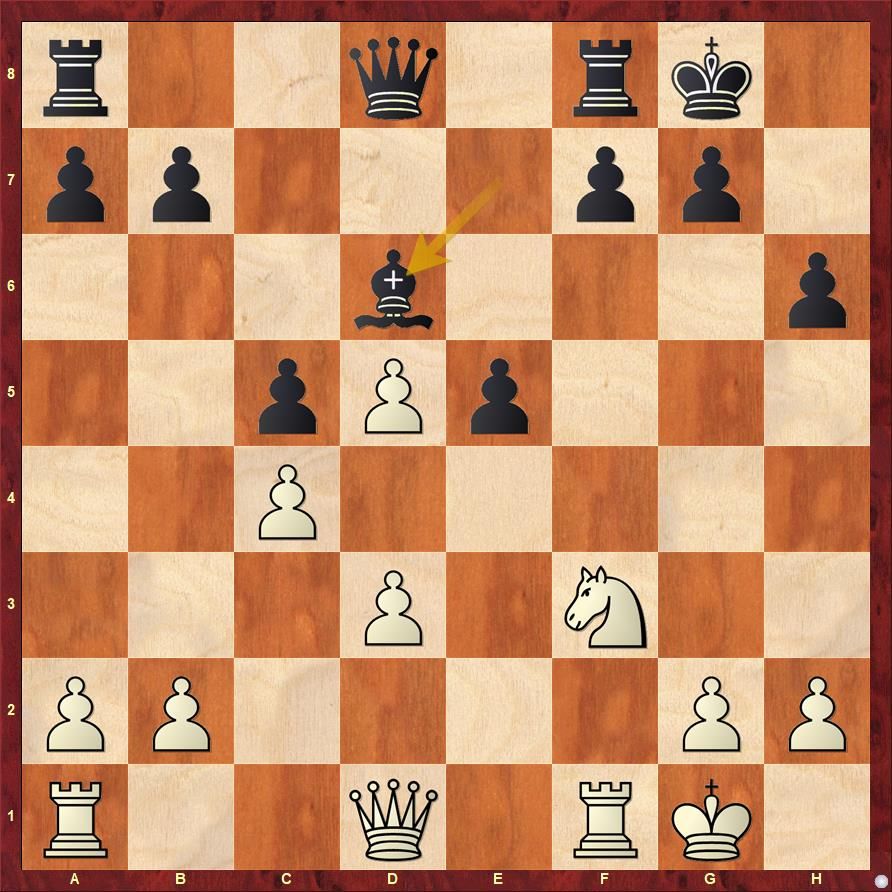 White to move. What would you do here?

It's quite easy to go through the motions and make a queen move to connect the rooks. But the key is to ask the question, what does my opponent really want here. It is clear that Black wants to play the move ...f5. And hence the right move is the very surprising, but at the same time quite logical g4! We are always afraid to push the pawns in front of our king, but in this very case, it makes complete sense because stopping ...f5 is the key. The white king anyway will find a nice home on h1.

Gukesh explains the intricacies of this position in the video

Kramnik's role was to make the youngsters understand the power of the move 1.Nf3!

There are seven youngsters in each of the groups. However, youngster Aditya Mittal had quite a big accident before the camp. It was almost certain that he would miss the camp if it meant travelling to Chennai. But a talent like him should not miss out on this golden opportunity and hence live streaming of the entire session was done. Aditya could see Kramnik and the moves being made and learnt a lot from the legend.

The golden question on my mind was how could Kramnik, a master of the Reti, teach that opening to youngsters, who are all predominantly 1.e4 players and that too in four days? Would he show his games, would he talk about a lot of variations, would he show certain tabiyas and discuss them in detail. What I realized by sitting in the class was how the great champion weaved all of this together in his training. Sometimes he would just talk about a certain tabiya (well known opening position) and then suddenly he would show a game of his against a top GM. In between there would be many lines and variations discussed. The biggest effect can be seen when Raahil Mullick, a complete 1.e4 player, after four hours of learning Reti from Kramnik said, "I am now excited to play 1.Nf3 in my games!" 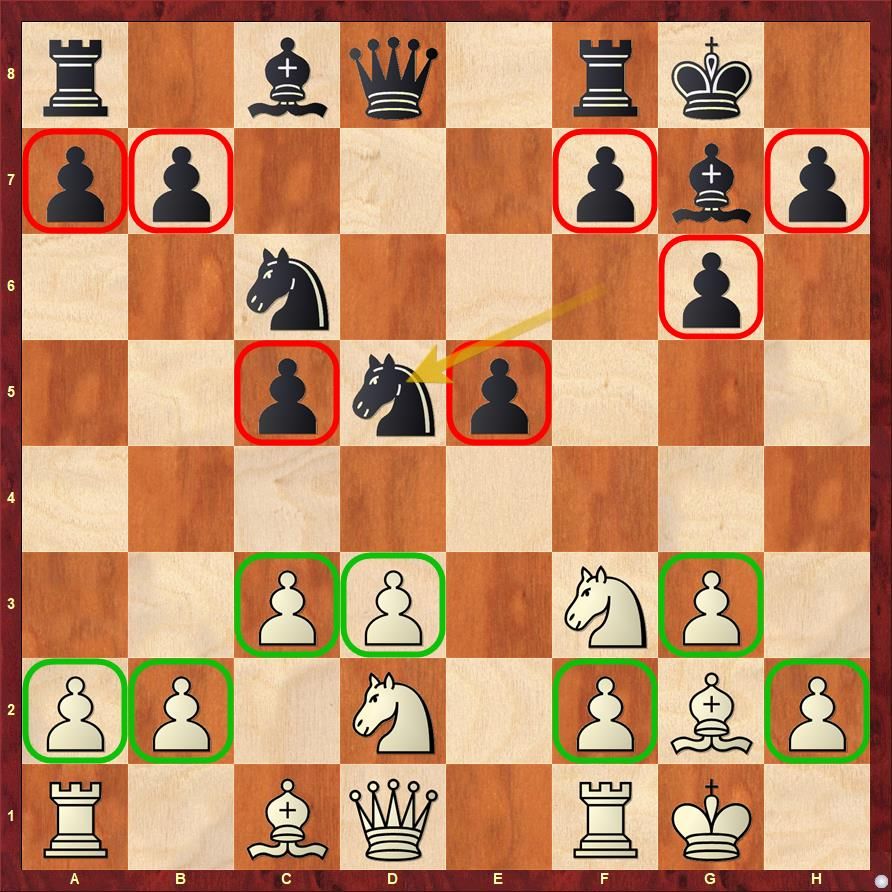 Here's an example of how Kramnik taught in the class. He brought up the above position and explained how it is actually very popular with reversed colours. The fact that White is a tempo up in such positions, gives him the chance to fight for the initiative. But what Vladimir didn't do here was load the youngsters with variations. He spent quite a lot of time here, looked a so many different moves like Qb3, Ng5, Nc4, Ne4. The drawbacks and advantages of each of the moves were explained along with long term pointers like "If White doesn't manage to do something concrete in the next few moves, he would suddenly start getting worse, because strategically, Black's position is much more preferable." 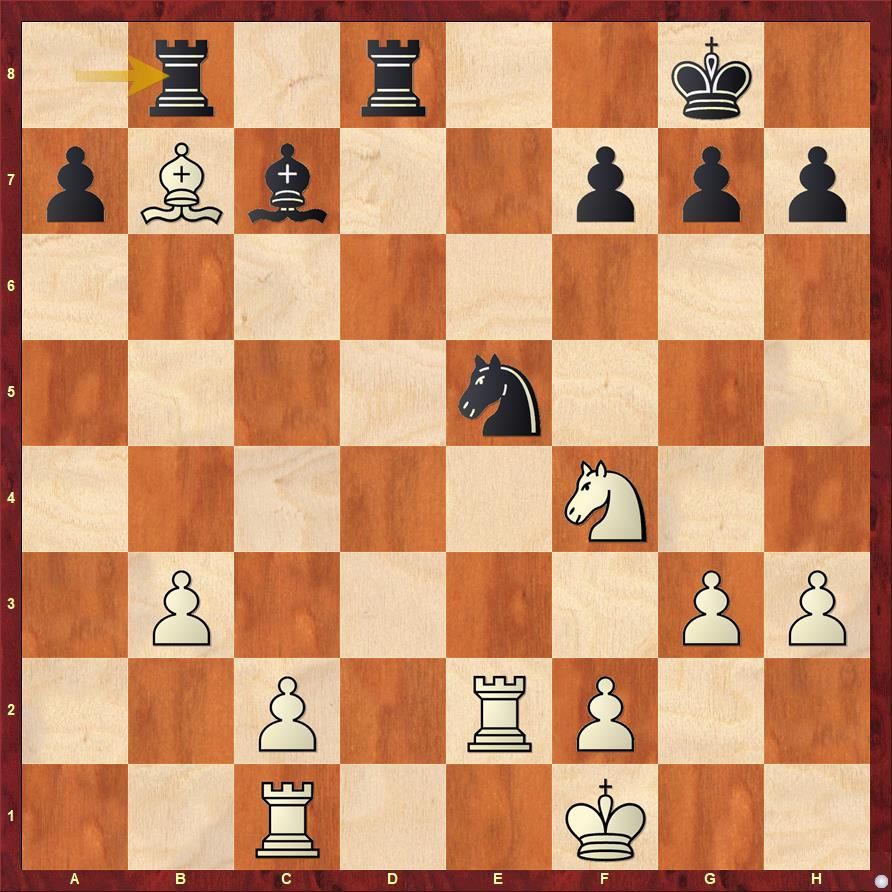 The bishop on b7 has been attacked and White has to decide between putting his bishop back on g2 or h1. What should he choose?

Chess is so complex that even when you have to choose between two simple looking moves like Bg2 and Bh1 in this case, it is extremely difficult to decide which one is better! Kramnik couldn't really see the difference and retreated his bishop to g2. Turns out h1 was a better square. Why was this the case? Let Arjun Kalyan explain.

A final position for the day 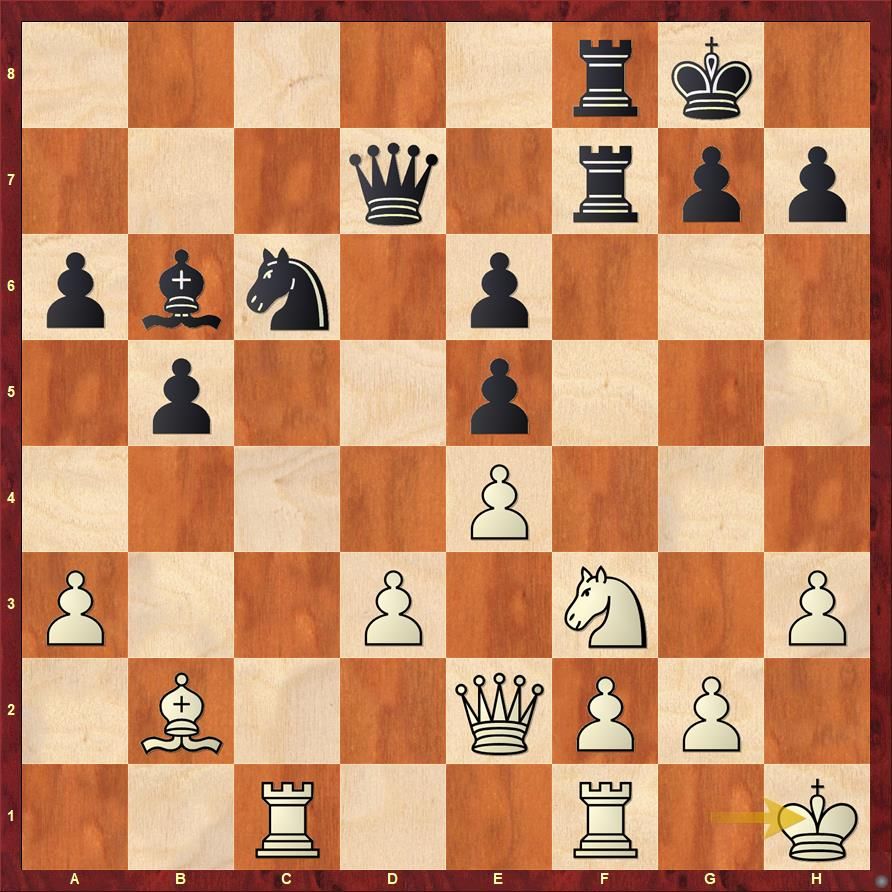 What was the move that Boris Gelfand (Black) played in this position?

In chess it is often quite difficult to assess positions. Sometimes in the arising positions it is possible to calculate, but quite difficult to assess the final positions. This is what separates high class GMs from other GMs! But sometimes players like Boris also have their moments of limitations as can be seen from the example. Black rightly sacrificed an exchange here with ...Rxf3! gxf3 and then followed it up with ...Bd4! 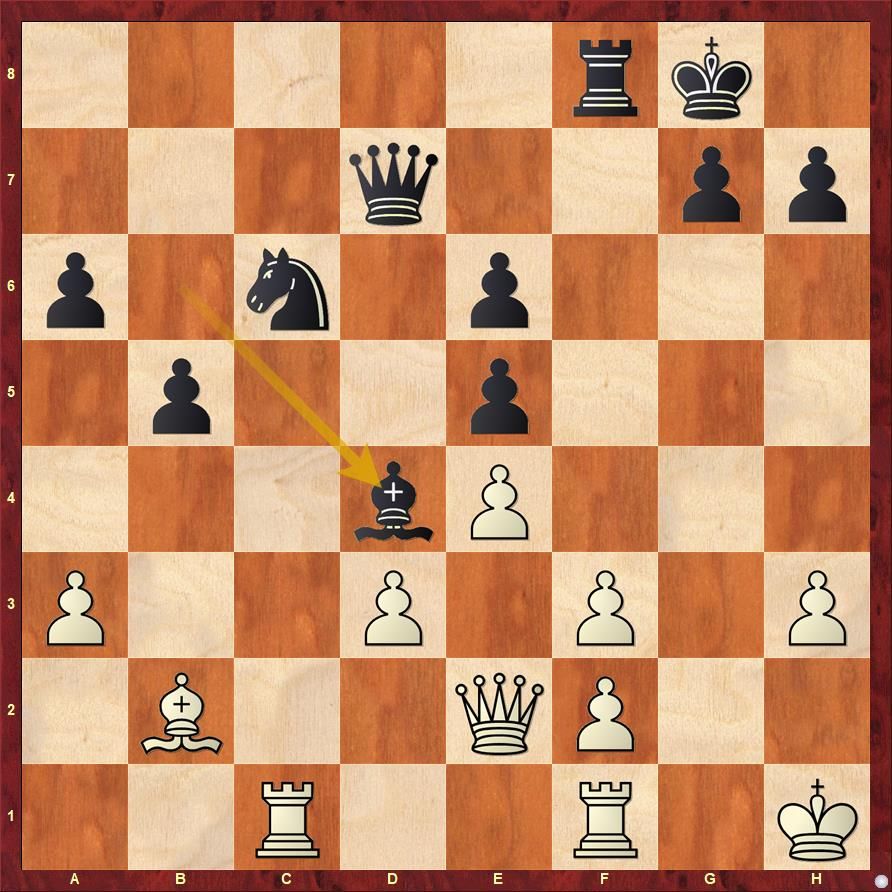 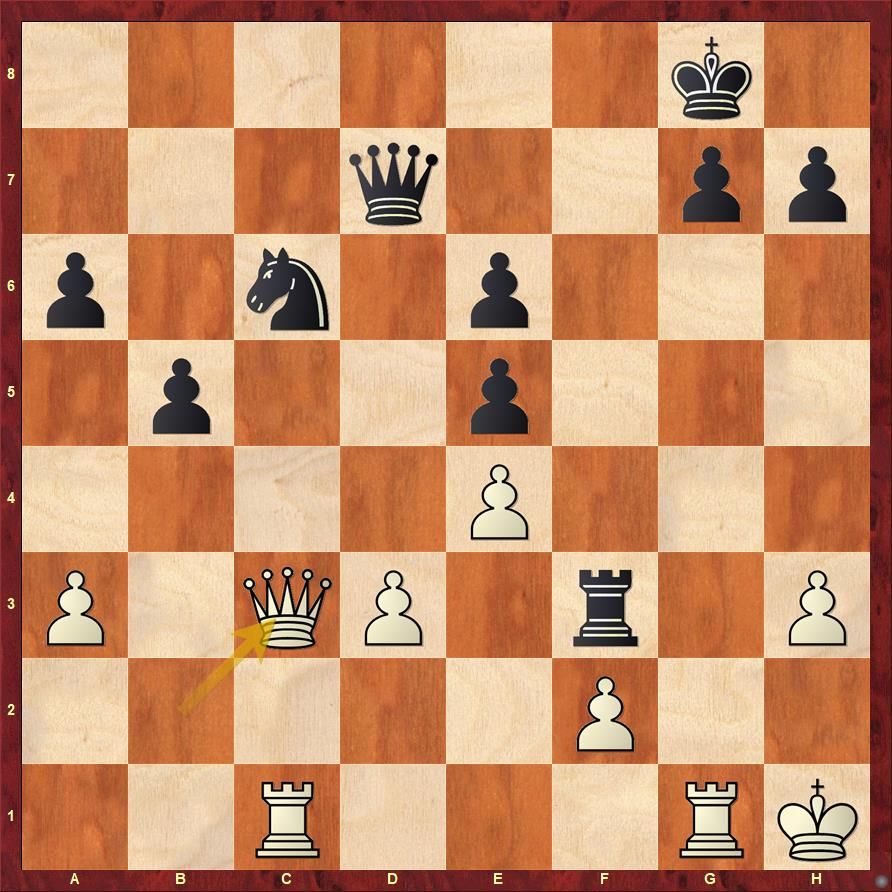 It was somewhere here or a move before that Boris had a tough time to make himself believe that he has nothing more than a draw! If the knight moves, then Qc8+ would exchange the queens and hence Gelfand decided to find the forcing line that led to a draw! 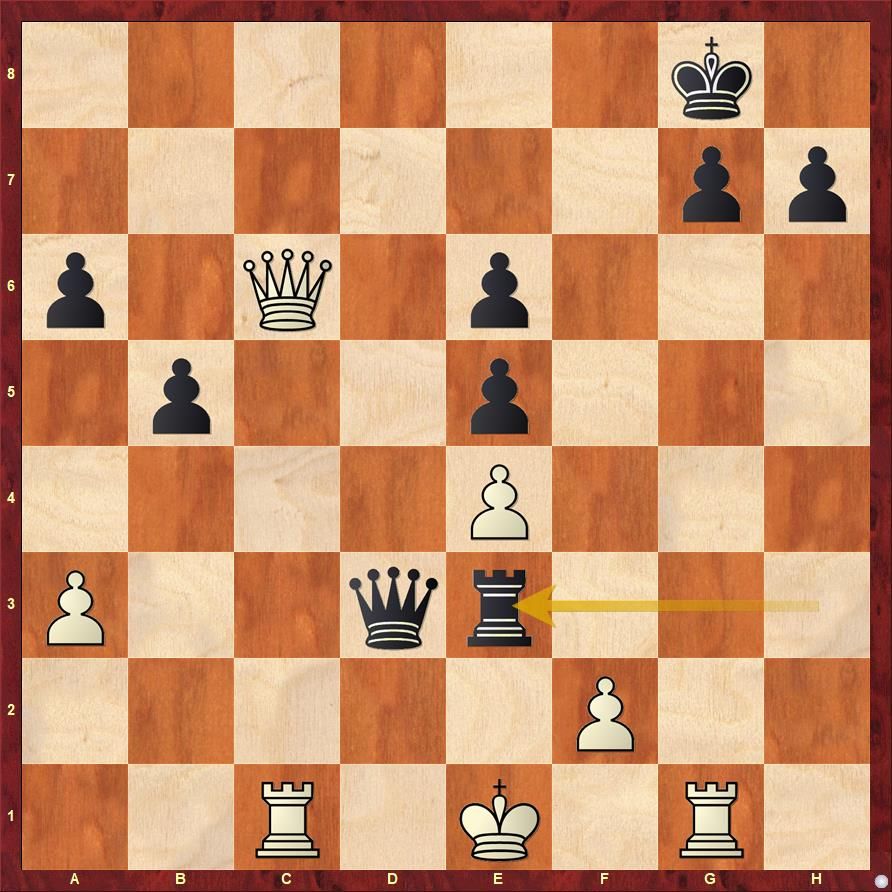 Work out the details as to how this position was reached! 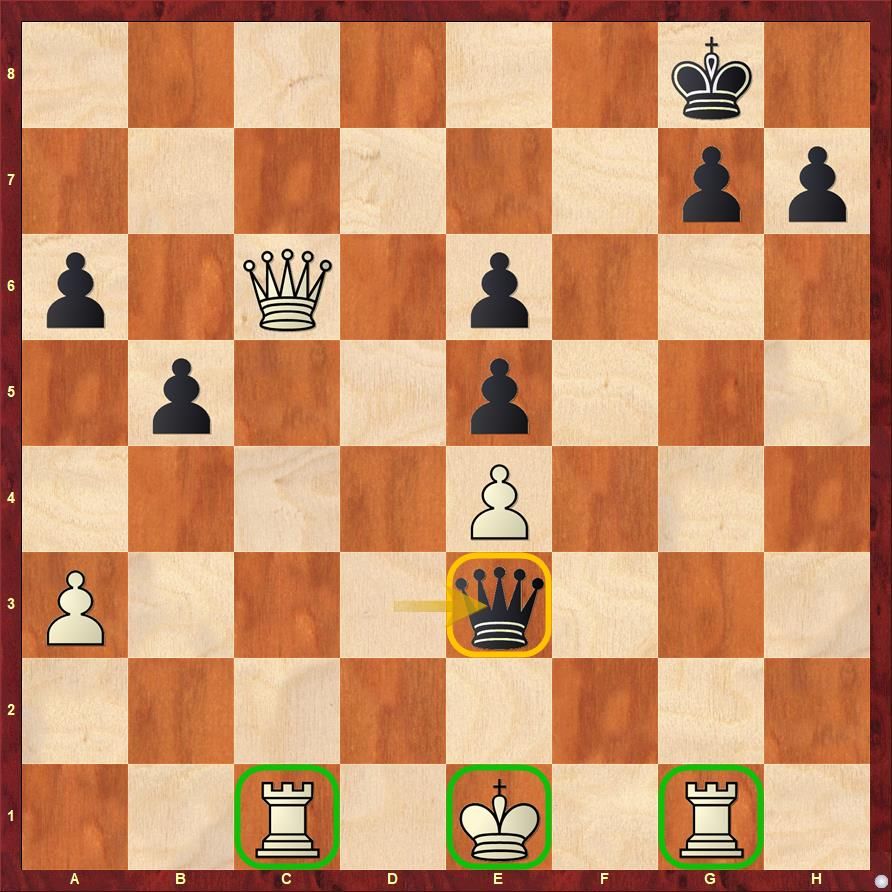 A picturesque end where White has two extra rooks, but no way to avoid the perpetual
Iniyan explains the Karjakin vs Gelfand game in detail

The swimming pool is one of the biggest attractions for the youngsters!

After a hard day's of training session, Pragg played until the night for his team Indian Yogis at the Pro Chess League! Now that's why we say, for each and every kid at the venue, Chess is Life!

Each day the youngsters indulge in yoga! But we will come to this later, in the coming articles! Right now I have to rush for the second day of the camp!
Get a feel of the entire environment of where the camp is taking place
Related news: