Day five was all about Rook endgames. It's amazing how much a motivated trainer, hungry students and well chosen material can achieve in a day. It started with theoretical endgames and the discussions then moved to Kramnik's brilliant rook endgames. In this article we give you a tough rook endgame to solve. Kramnik was a big sport as he spoke about two of the biggest misses of his chess career - the 4th game of his 2000 match against Kasparov and his game against Deep Fritz in 2006. The youngsters also showed their games to Kramnik and the 14th World Champion tried to work on their weaknesses and made some valuable suggestions. An intense and power-packed day.

Chess is a tough game and the stronger the player is, the better he understands this. But shouldn't the better player find chess easier? And shouldn't weaker players think chess is tough? Well, that's the paradox the chess world suffers from, and seeing Kramnik work has made me understand how top players respect the game. The first thing that Kramnik said after meeting the youngsters is, "There is no golden way of improving at chess. Everyone can have his own method. What I am about to do is present the method I believe in and what has worked for me as a player. As a player it is for you to decide how much you want to take and integrate in your game." Coming from an ex-World Champion and one of the finest players that the chess world has ever seen, one cannot help but simply admire Kramnik's humility. He sees in these young kids, a young him. He treats them as he would liked to be treated by someone when he was 14. 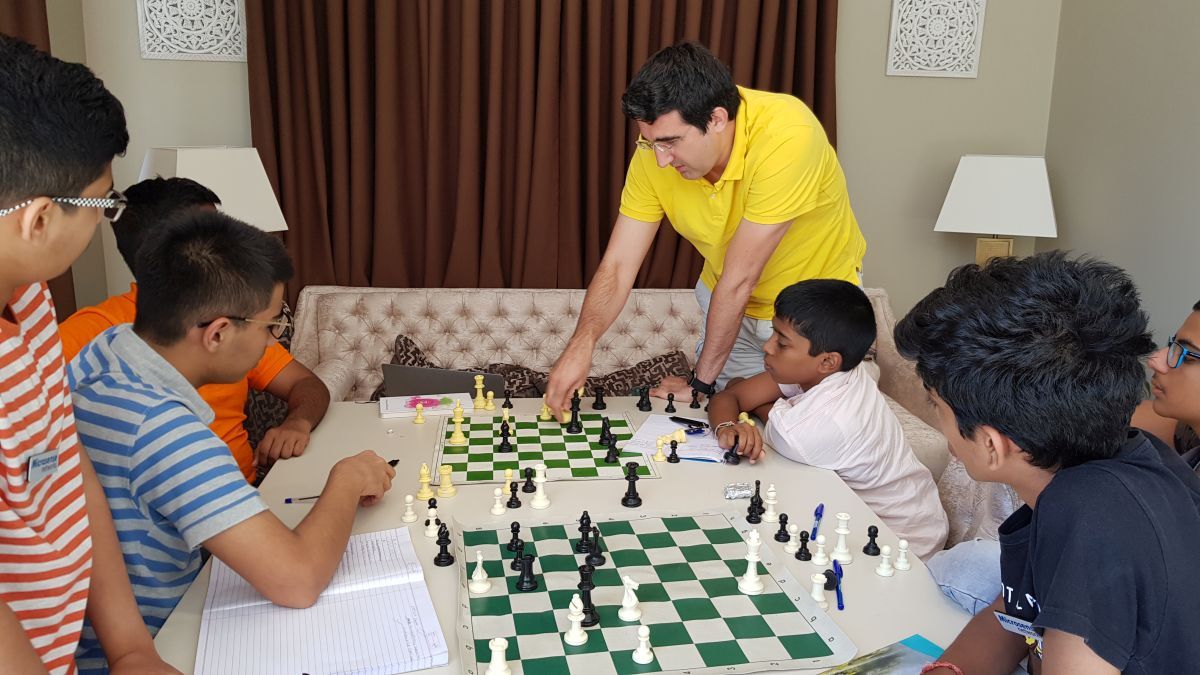 Kramnik showing one of the toughest games of his chess career - his missed win against Kasparov from 2000 World Championship Match in game four | Photo: Amruta Mokal 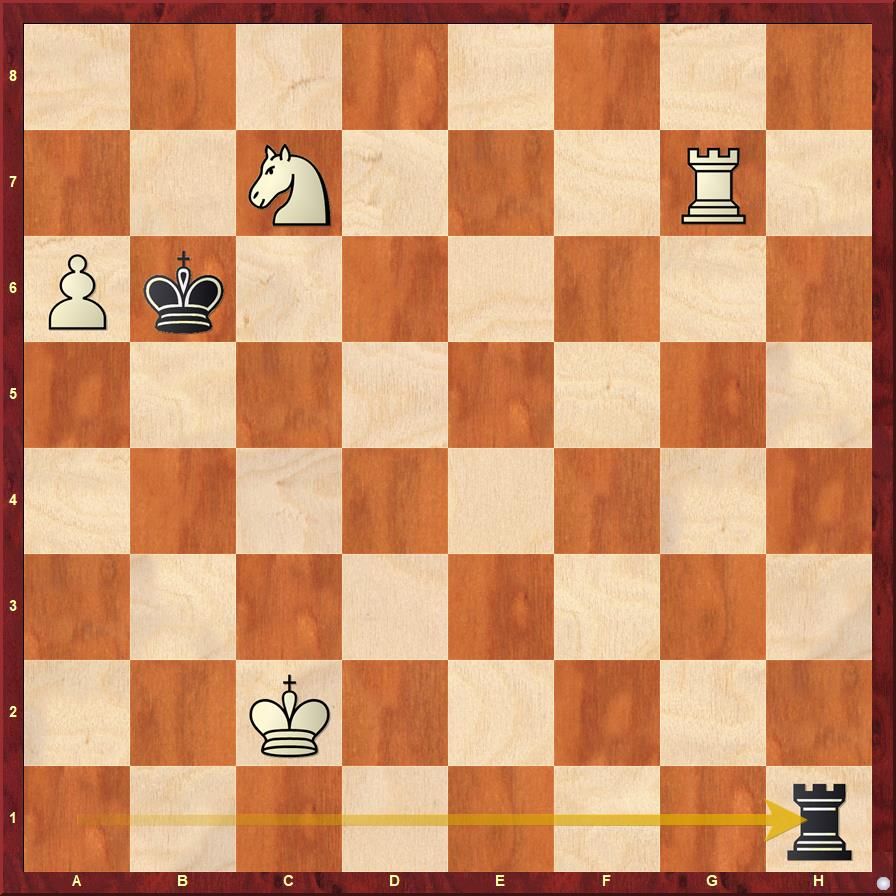 In this position Garry blundered with his last move 58...Rh1. How should White win the game?

White could simply play the move 59.Rg8! Kramnik hadn't missed this move. He had thought about it but had rejected it because after 59...Rh7 60. Rb8+ Ka7 61.Rb7+ he thought that the king would be somehow stalemated after 61...Ka8. Yes Ka8 is not possible, and after 61.Rb7+ it is a checkmate! But somehow Kramnik hallucinated at this point in the game and he didn't go for the line. Instead he played 59.Kb2 and after this the game was drawn. When Kramnik was going towards press centre someone came and asked him - Why didn't you play Rg8? "Well, but the king is sort of stalemated on a8" and while saying this he stopped in his tracks! He had just missed the mate.

When Kramnik narrated this incident to the youngsters at the camp, they were all rivetted in their seats. The first question for Raunak was, "Sir, how did you recover from such an incident?" After all it was the World Championship Match. Kramnik then went on and told them about how he tries to recover after these results.

While showing this game, Kramnik also spoke about another blackout in his chess career, his game against Deep Fritz in 2006. 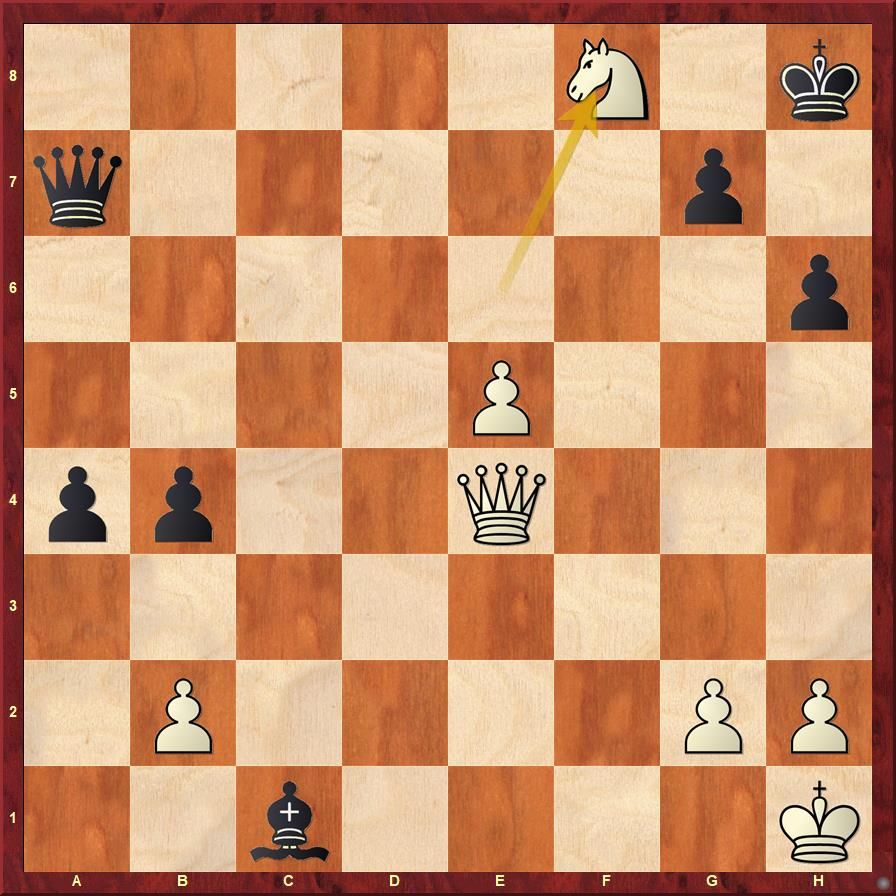 This was also the Question of the day yesterday and we asked you two things: 1. What was the best move for Black here, and What did Kramnik play?

Well, the best move is quite clear - Black should have played 34...Kg8. (Congratulations to Shivakumar Sundaram, Amit Mishra, Aradhya Garg and Kramnikstudent for commenting the right answer in our previous article). Kramnik played 34....Qe3 and got checkmated in one move with Qh7# He spoke about this blackout in great detail with the youngsters. In fact Kramnik took nearly 10 minutes for his move. He saw that ...Qe3 was winning for him and tried to find a defence for White. Computers don't usually blunder in such positions, he said to himself. And with this thought he began looking at all the individual moves in the position, like h3, h4, g3, g4 and so on! He went over all the moves in the position for nearly ten minutes and saw nothing wrong with 34...Qe3. "Perhaps the operator made some error on the previous move it seems", Kramnik thought to himself. With this in his mind, he played 34...Qe3 and got up from the table. He could hear some noises in the crowd, but decided to ignore them. From far he saw the Fritz operator was completely puzzled. He was looking at the position on the board, and then on the screen. Mathias Feist - the operator and one of the lead programmers of ChessBase, whom I had met at the ChessBase Office, had told me that he was absolutely shocked to see 34...Qe3 on the board. After some time, he executed the move 35.Qh7# Kramnik came back to the board and was equally stunned. How did he miss such a move after thinking for nearly ten minutes?

Experiences like these when shared with the youngsters, makes them believe that no failure is final. It also helps them to take the blunders and the losses in their games with a feeling of neutrality. If a World Champion can make such errors then so can we. It was a great gesture by Kramnik to talk about these episodes in his chess career which were definitely not pleasant for him. But he sees the educational value in them and that's why he included them in his training.

Well, it can happen to even the best! | Photo: Amruta Mokal

Solving the issues of the youngsters

Another extremely important part of the training session is Kramnik trying to solve the issues faced by the youngsters. Here Kramnik is very careful and he takes this part of the training very seriously. For eg. One of the boys asked him, "Sir, I am very bad at converting winning positions." I had expected some detailed reply on this subject by Kramnik, but instead he first asked the youngster. "What sort of positions are you bad at converting? Is it an issue of technique or calculation." He then went on to further interrogate this statement and asked him to supplement it through couple of his games. It was only after nearly thirty minutes that Kramnik could confidently say what was the problem that the youngster faced and how he can try to solve it. Chess players lack objectivity when seeing their own games or weaknesses and hence it is important to actually check the games to understand if that specific weakness actually exists. According to Vladimir, it is critical to make the right diagnosis of the weakness of a player. Sometimes it is even better not to find the weakness than to find the wrong one! And that's why he took special care that he just didn't shoot out his opinion. 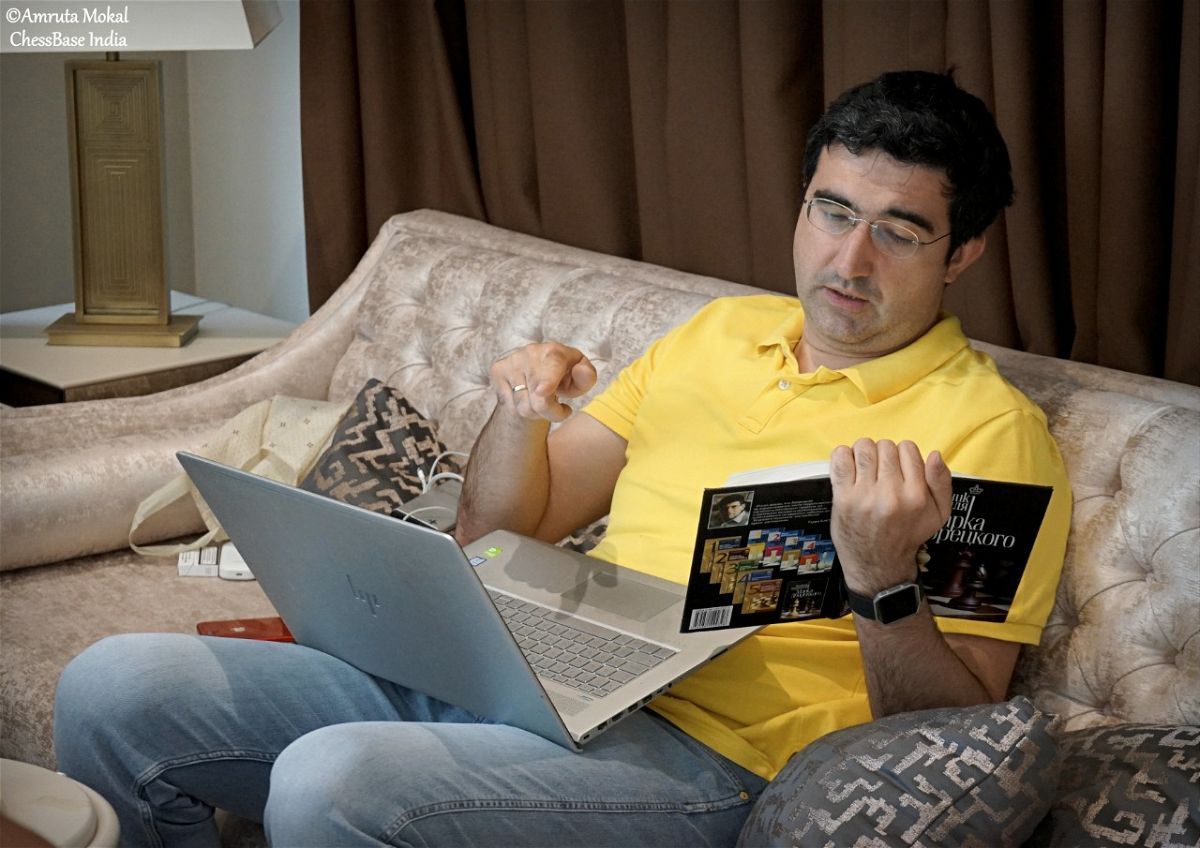 Day five was all about Rook Endgame and Kramnik began with a few positions from the Dvoretsky's Endgame Manual to check the knowledge of the youngsters before moving to his own games! | Photo: Amruta Mokal 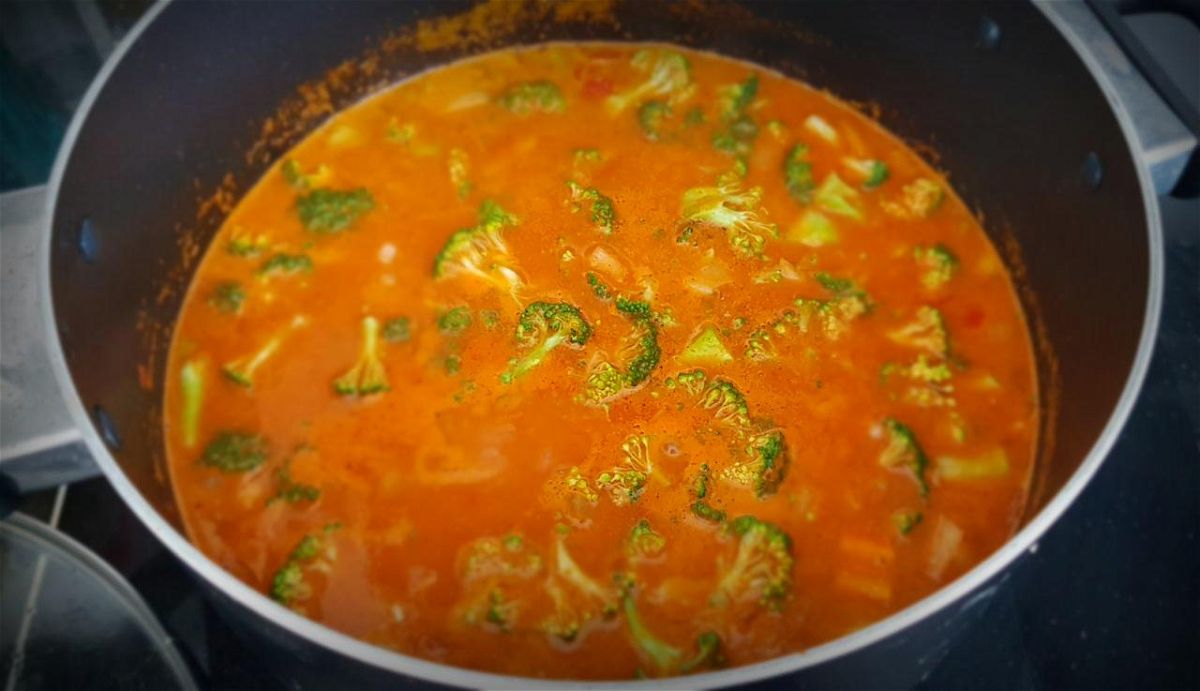 Mix veg Brocolli was on the menu! | Photo: Amruta Mokal 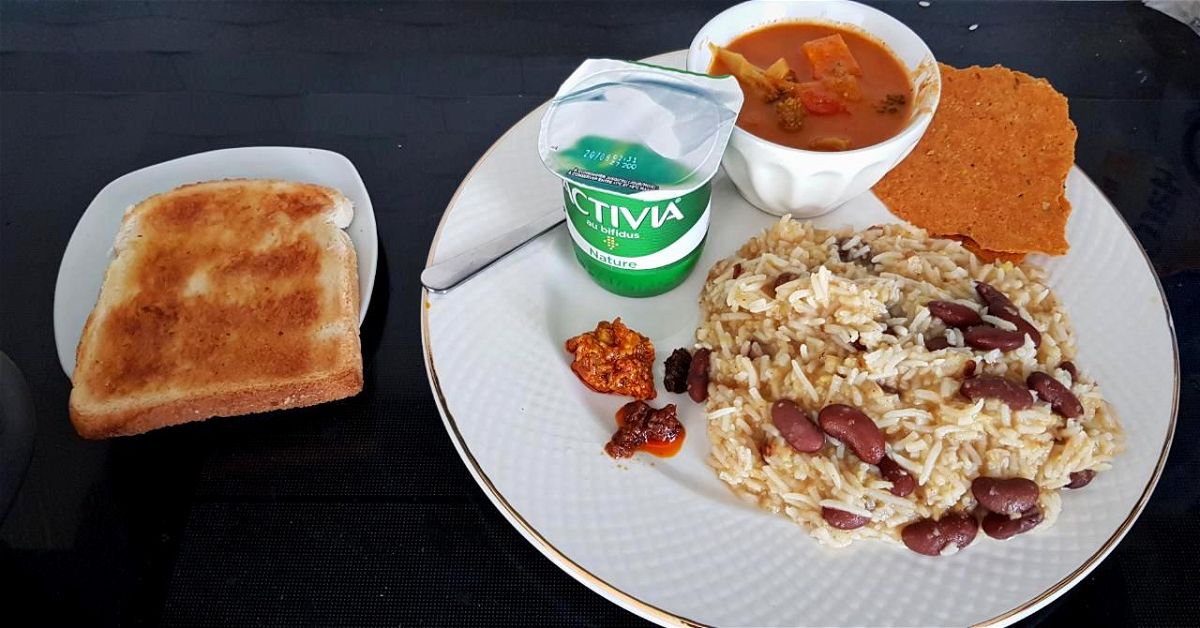 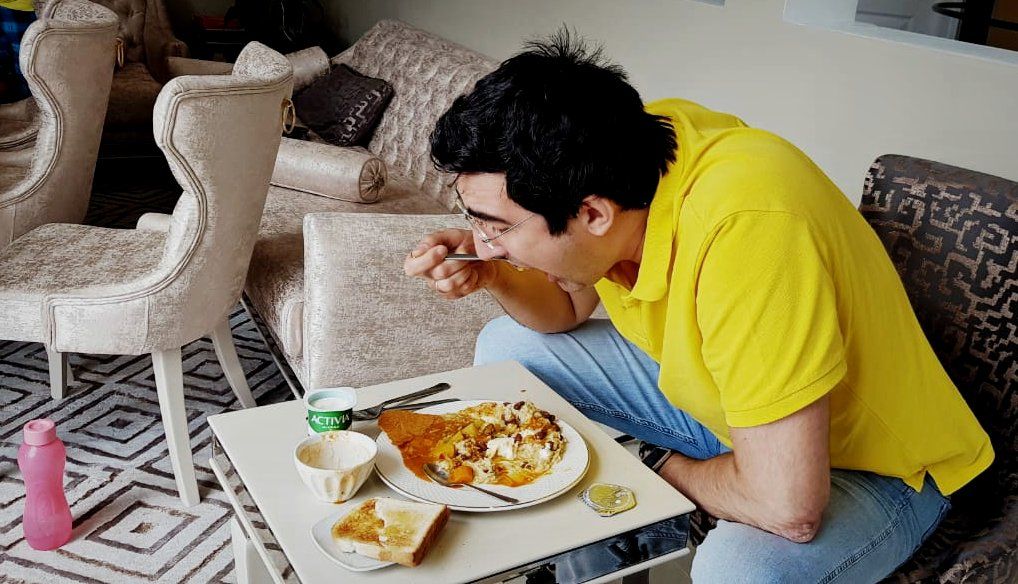 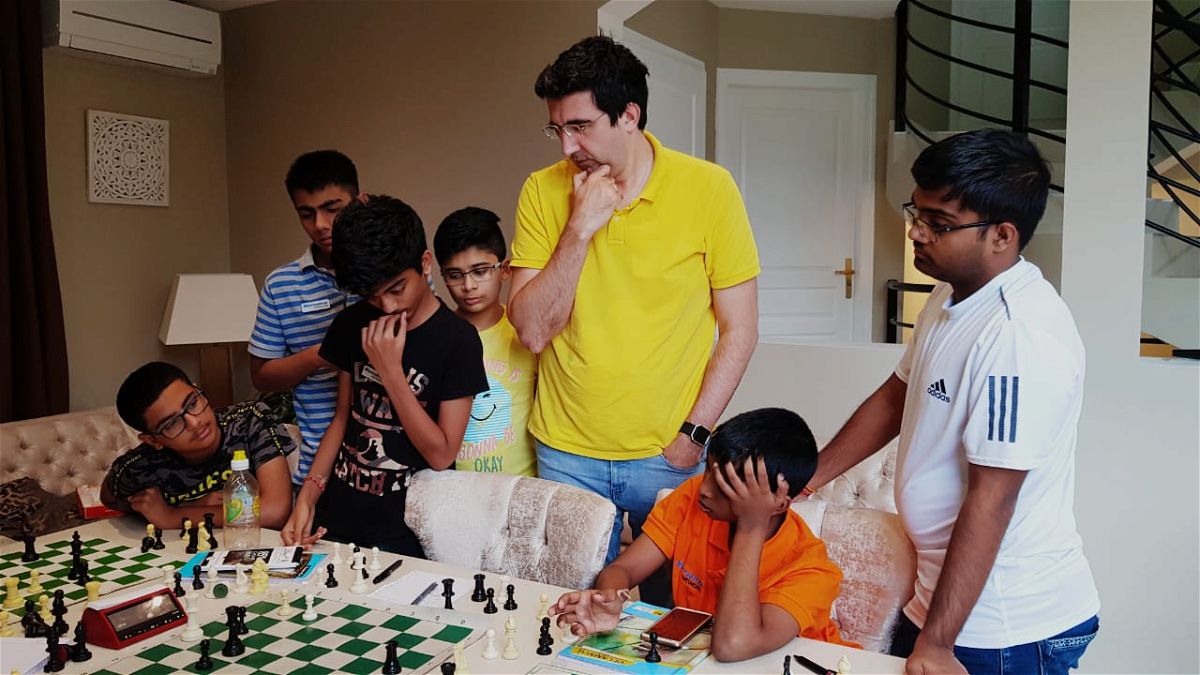 It's really astonishing to see their enthusiasm for a drawish endgame even after six hours of work! | Photo: Amruta Mokal 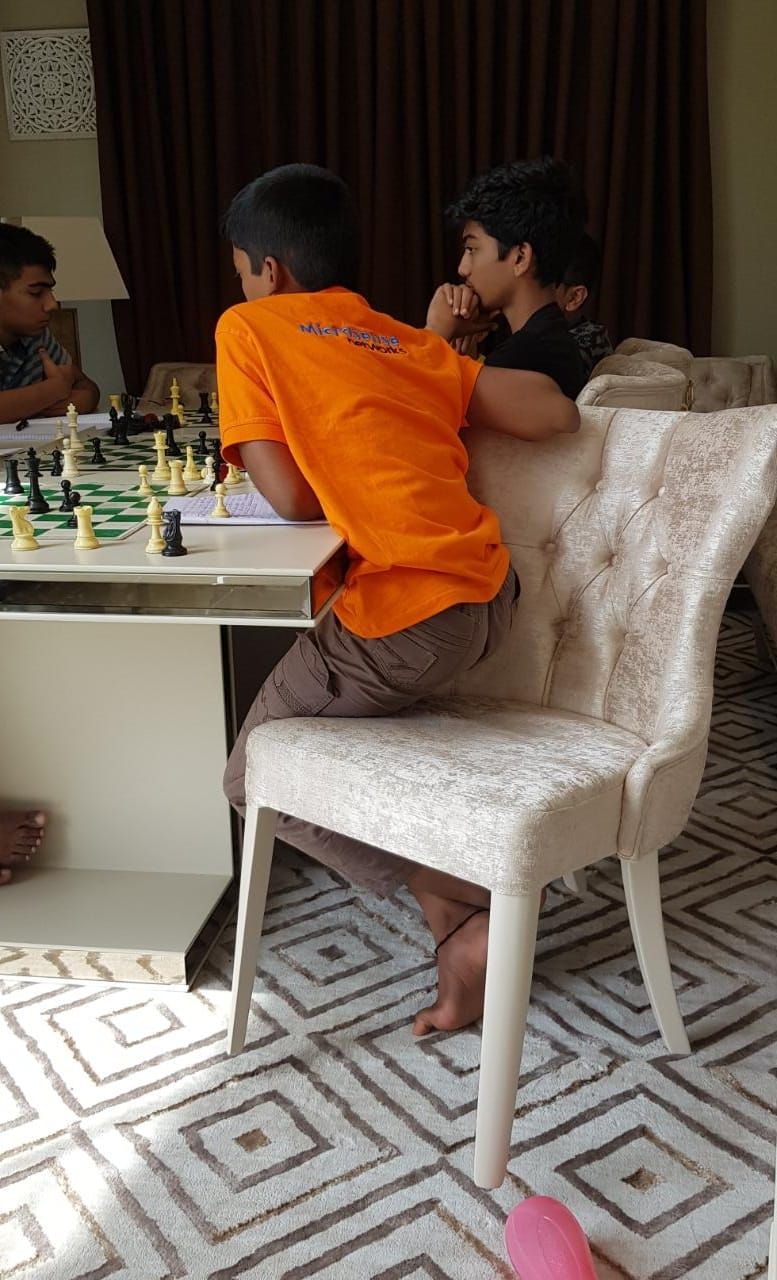 And we thought chairs are meant for sitting! | Photo: Amruta Mokal 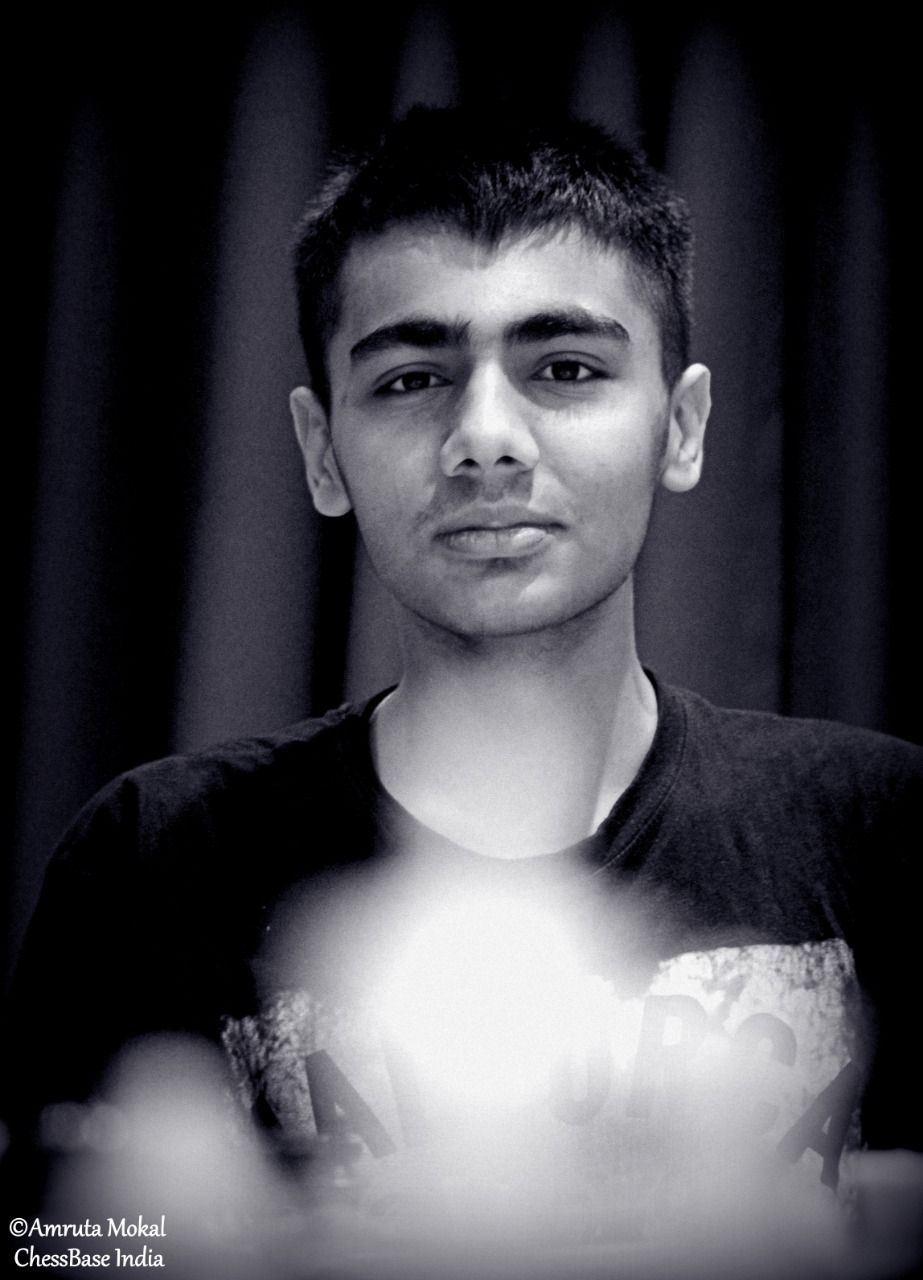 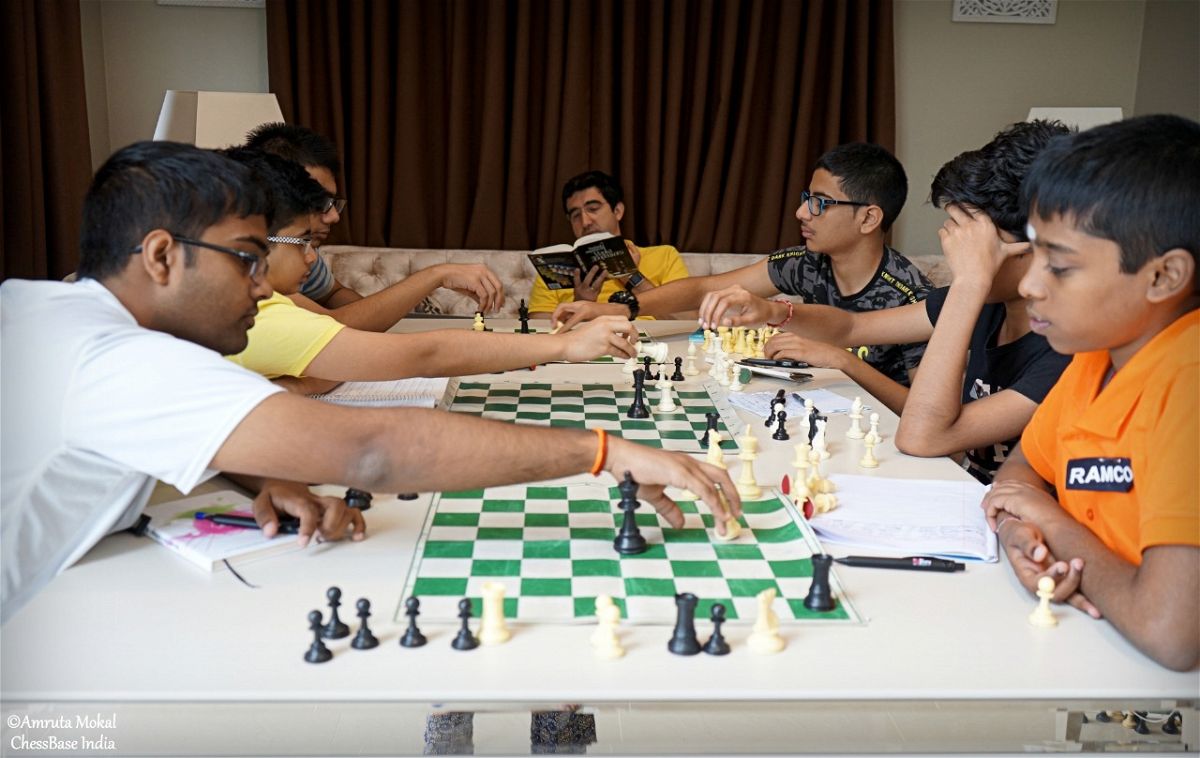 The rook endgame session made these youngsters understand how complex they can actually be | Photo: Amruta Mokal 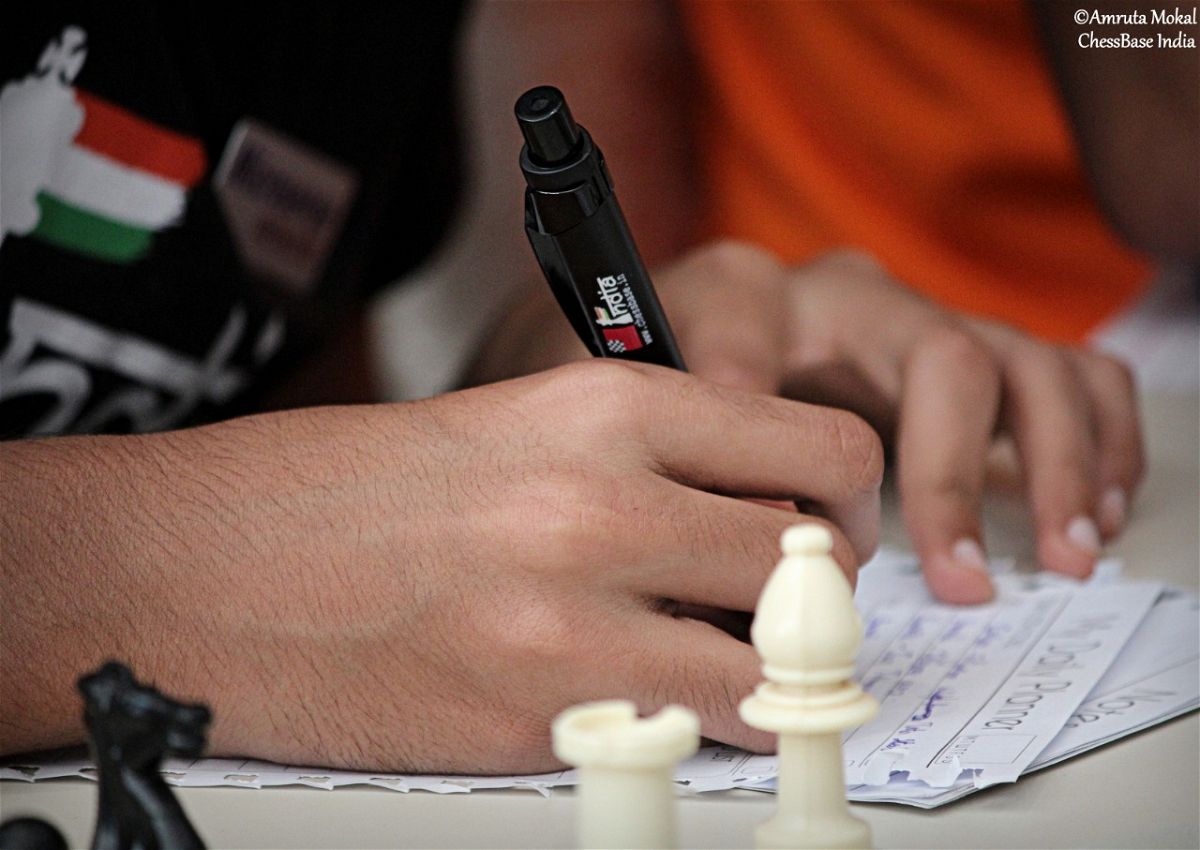 All youngsters are using the ChessBase India pens to take down notes! | Photo: Amruta Mokal

Question for the day 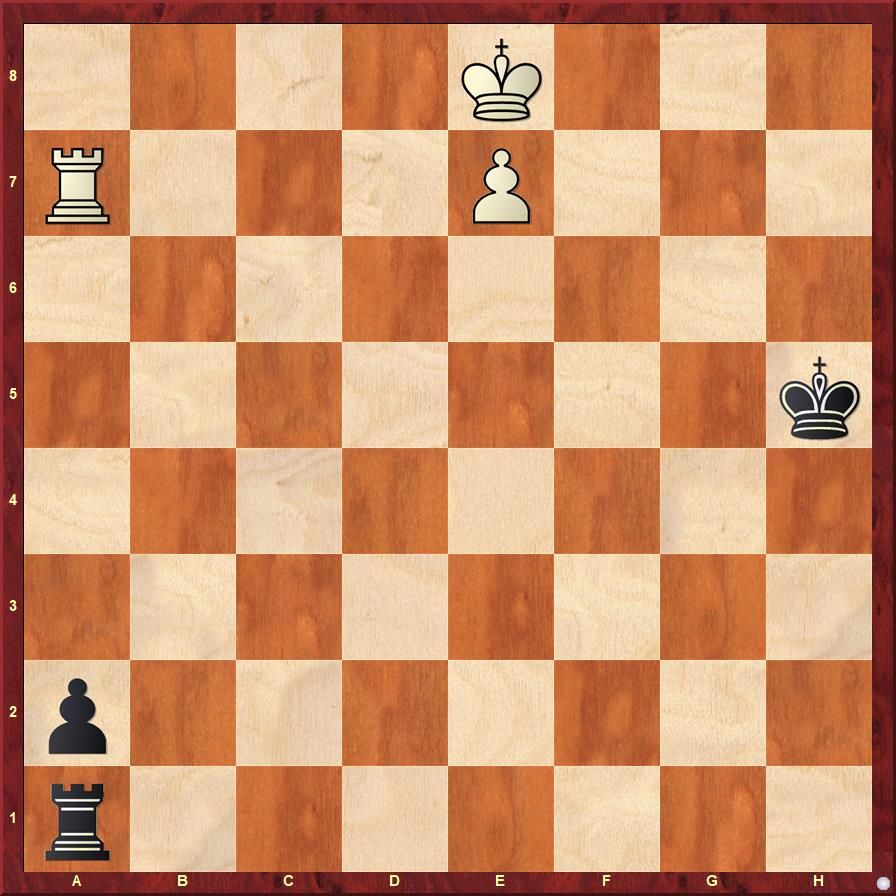 White to play and win. Please take good time on this one and try to figure out the intricacies. You have to be as nimble as a ballerina in order to win. 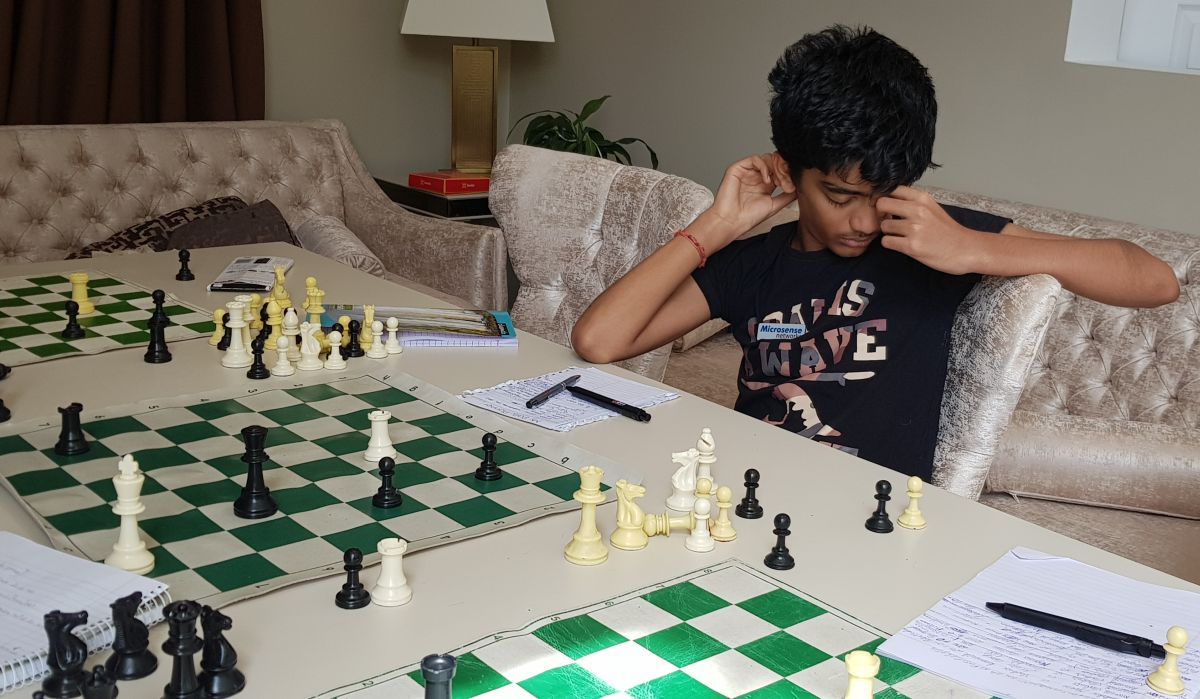 This is what happens when you solve rook endgames for over six hours! | Photo: Sagar Shah
Related news: