10-year-old Sanjay Sivakumar suffers from Osteogenesis Imperfecta (OI). It's a disorder that is quite rare and affects one in 10,000 to 20,000 people across the world. Sanjay has bones that are brittle and break very easily. He has till date suffered 57 fractures. While growing up Sanjay became the under-7 Karur district champion in Tamil Nadu. However, due to his health condition, he has had to give up playing over the board chess. His father Sivakumar is a chess coach, arbiter and an organizer. For Sivakumar, the Covid-19 pandemic has been rough and he is finding it tough financially to continue Sanjay's treatment. Here's a humble appeal to all our readers to help the youngster fight this deadly condition.

Lend a Helping Hand to a Young District Chess Champion

Ten-year-old Sanjay Sivakumar, a former Under 7 chess champion of Karur district in Tamil Nadu, has been forced to give up chess due to a rare brittle bone disease by the name Osteogenesis imperfecta (OI). The term "osteogenesis imperfecta" means imperfect bone formation, which may be a genetic disorder. People with this condition have bones that break (fracture) easily, often from mild trauma or with no apparent cause. Due to the soft bones, Sanjay had suffered 57 fractures so far. Imagine the little boy bearing the brunt of so many fractures from his early childhood. 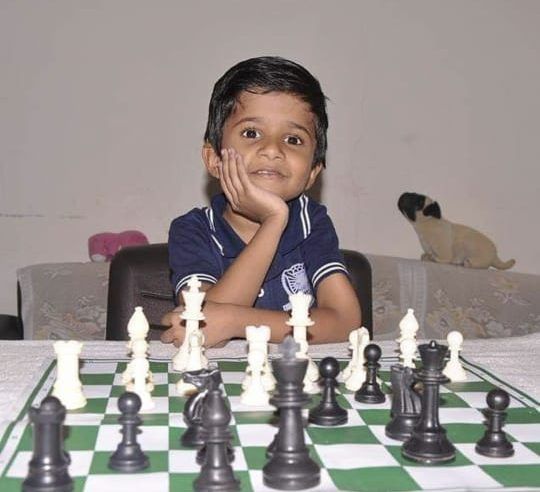 Sanjay is a talented chess player and...
....and learned chess from his father Sivakumar VS.  Sivakumar is a former secretary of Karur District Chess Association and has organized many rating tournaments and state level tournaments during his regime.
One of the many tournaments organized by Sivakumar, where the winners were awarded with cycles

Sanjay could not mingle with his friends due to the fear that if somebody pushes him, his bone may be fractured. Even a mild fall causes severe fracture. Once in every three months, he has to stay in Christian Medical College Hospital, Vellore, a world famous institute for a week with his father for the treatment, which costs lakhs of rupees. 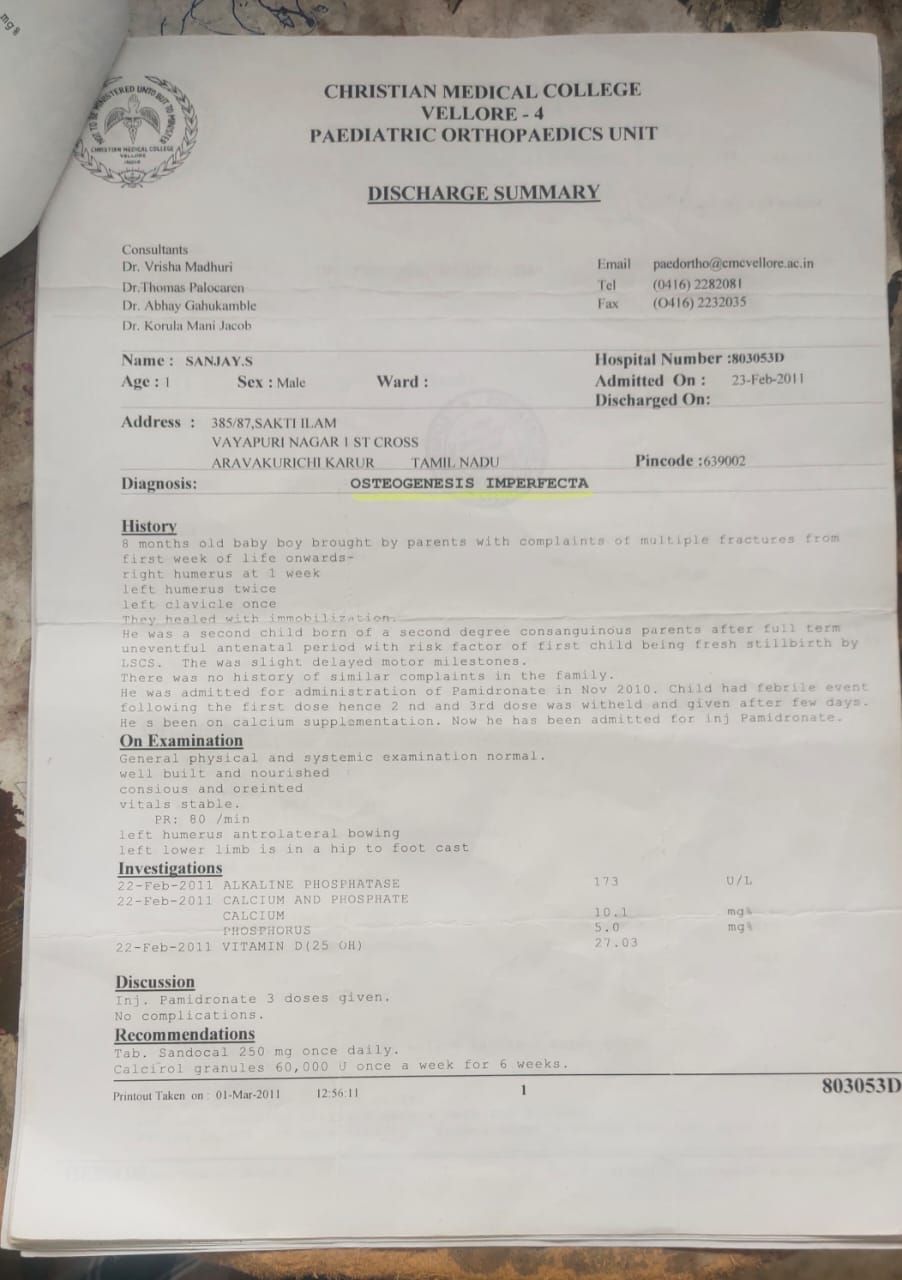 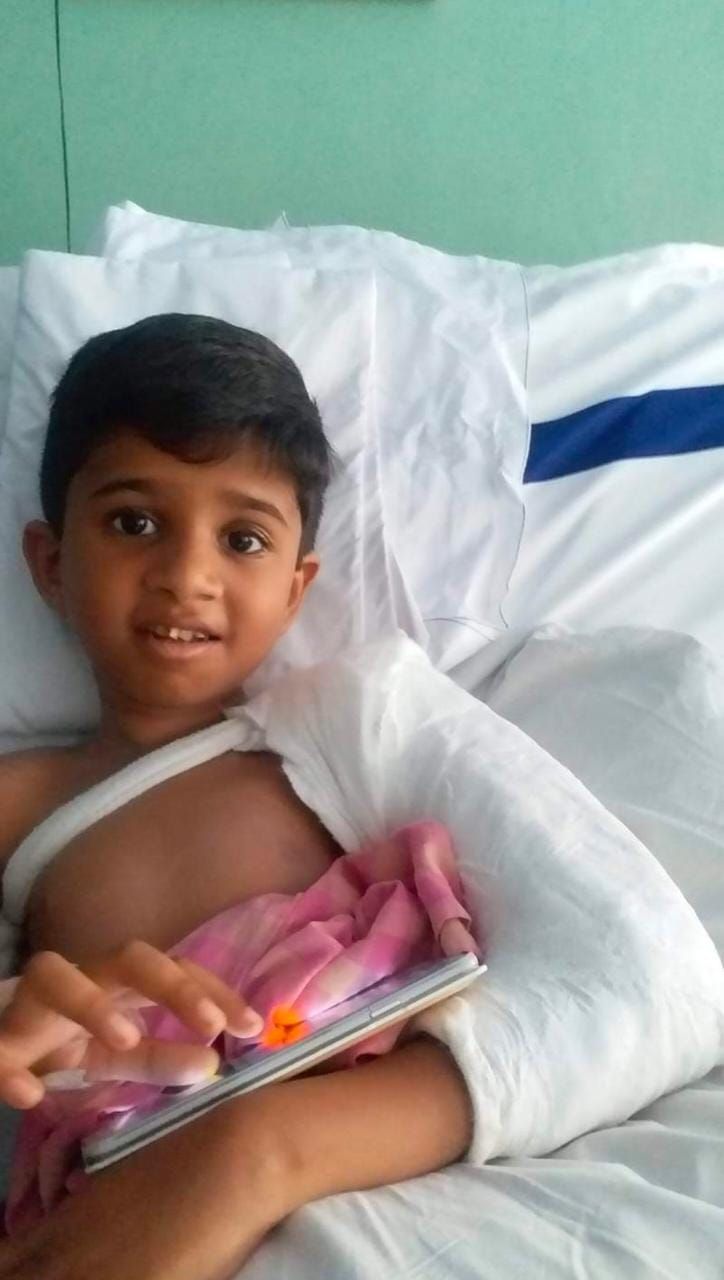 Even though Sanjay finds it difficult to move around, he can still continue to play the sport he loves online - chess!
Sanjay has already had 7-8 surgeries since childhood

The need for financial support 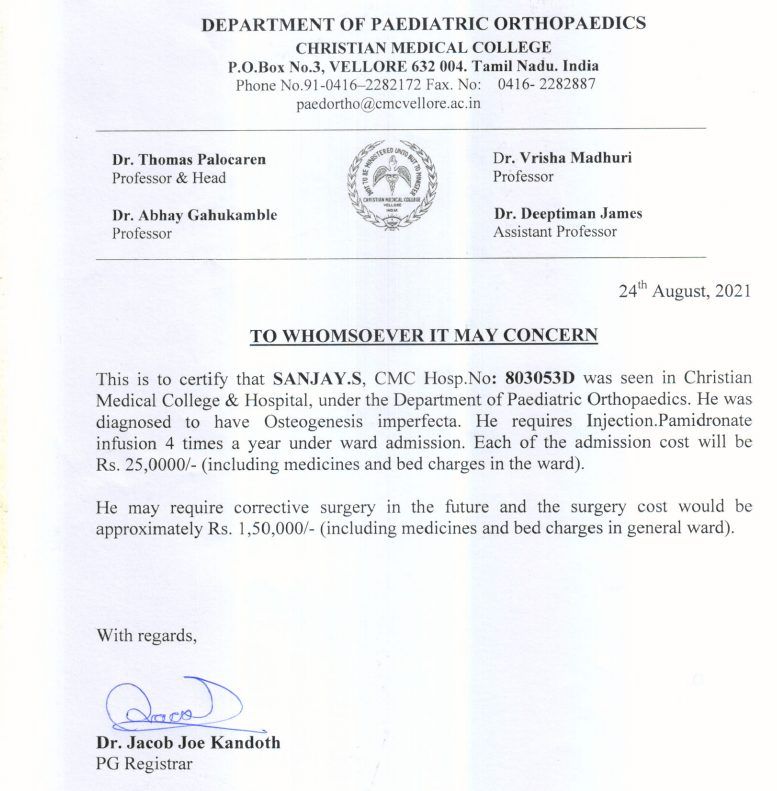 Sivakumar is working as a chess coach in a private Matriculation school in Karur, the salary from which he was able to meet the financial burden with great difficulty. After the advent of the pandemic Covid-19, there is no income from the school and Sivakumar is finding it difficult to continue the costly treatment to Sanjay, as his financial resources have drained. Till date he has spent Rs.14,00,000 towards Sanjay's health. Sivakumar has been associated with chess for over 35 years. He has been a chess coach and a state arbiter for over 17 years! He has organized a FIDE rating tournament (below 1600), seven state level tournaments and 20 district level events.

1. You can support Sanjay in multiple ways. You can Click on the Pay now button and pay via the Payumoney portal.

2. You can transfer the amount to ChessBase India's Google Pay Account:

3. You can also become a ChessBase India YouTube member and all the membership amount of the month of August will be given to Sivakumar for the treatment of his son Sanjay.

In a few days from now - all the people who have contributed through the above means will be mentioned on the ChessBase India newspage. If you pay via Google Pay there won't be any charges deducted, if you use Payumoney portal - their charges are 1-2% per transaction depending on the card you are using. If you use YouTube memberships, then YouTube takes away 30% of the amount before sending it to us.

People from outside India can directly transfer to the account of Sivakumar. The details are given below. If you want to get in touch with Sivakumar before sending the money to him, you can write to him on his mail id vssivakumars17@gmail.com with cc to chessbaseindia@gmail.com.

Sanjay is fighting hard. Let's make sure he continues to smile, always!

We, at ChessBase India have always tried our best to support the people who have supported chess. In 2020, we supported chess coach Durgesh and his health condition has improved substantially now. We hope that together as a chess community, we are also able to Sanjay and make sure he gets back on the chess board!

Osteogenesis imperfecta (OI) is an inherited (genetic) bone disorder that is present at birth. It is also known as brittle bone disease. A child born with OI may have soft bones that break (fracture) easily, bones that are not formed normally, and other problems. Signs and symptoms may range from mild to severe. Osteogenesis imperfecta is a rare disorder and affects approximately 1 in 10,000 to 20,000 people worldwide.

Special thanks to Dhanasekar K, who helped us to in communication and compiling material for the article.

"When ordinary people come together and contribute, extraordinary things can happen to our chess community."