Aleksandra Goryachkina beat Ju Wenjun for the second time in FIDE Women's World Championship Match 2020 and for the first time she has taken the lead. The score is now 4½-3½. Goryachkina playing with white pieces opted for QGD Exchange variation. The Challenger Goryachkina played aggressively in the middlegame and the defending champion played quite passively. Ju's defence proved to be futile as Goryachkina created a center passed pawn after neutralizing black's center passed pawn with ease. With four games to go and the second stage being held in Russia, all signs seem to point towards the Challenger. She was able to make a comeback immediately after suffering a loss, can Ju do the same? Photo: Eteri Kublashvili / FIDE

Goryachkina leads the event for the first time

Aleksandra Goryachkina wins the 8th game and leads the Women's World Chess Championship by one point: 4½-3½. The World Champion Ju Wenjun only has four games left to overturn the score and retain her title.. 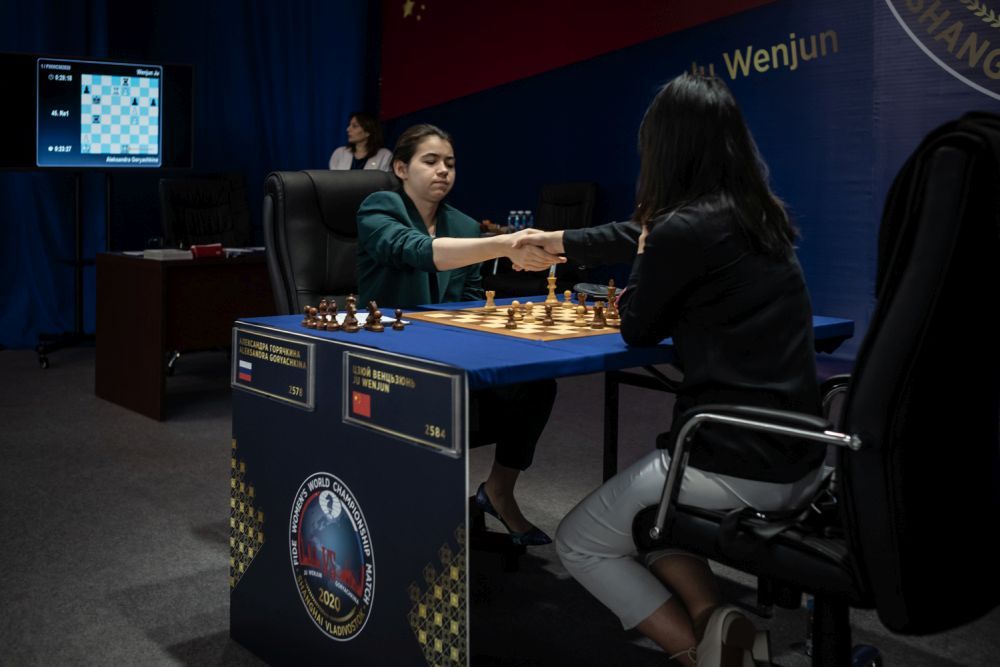 Goryachkina takes the lead for the first in this World Championship Match| Photo: Michael Friedman / FIDE

Regardless of the outcome, it has become increasingly clear that Goryachkina is punching above her rating. In this match, she has demonstrated grit, patience, and perseverance of a 2600+ player. Will it be enough to become the next World Champion? 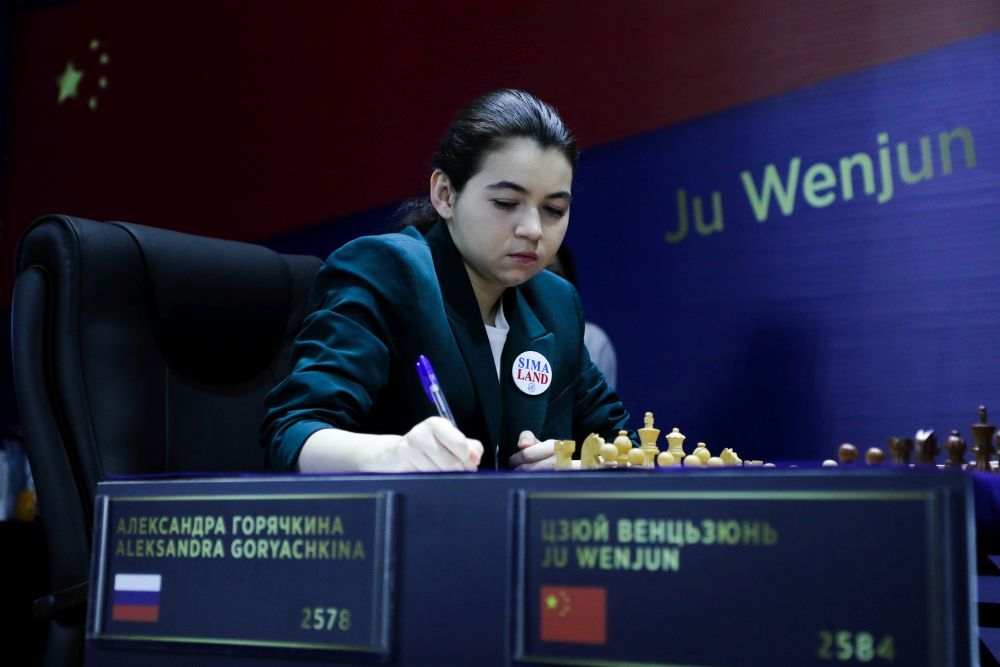 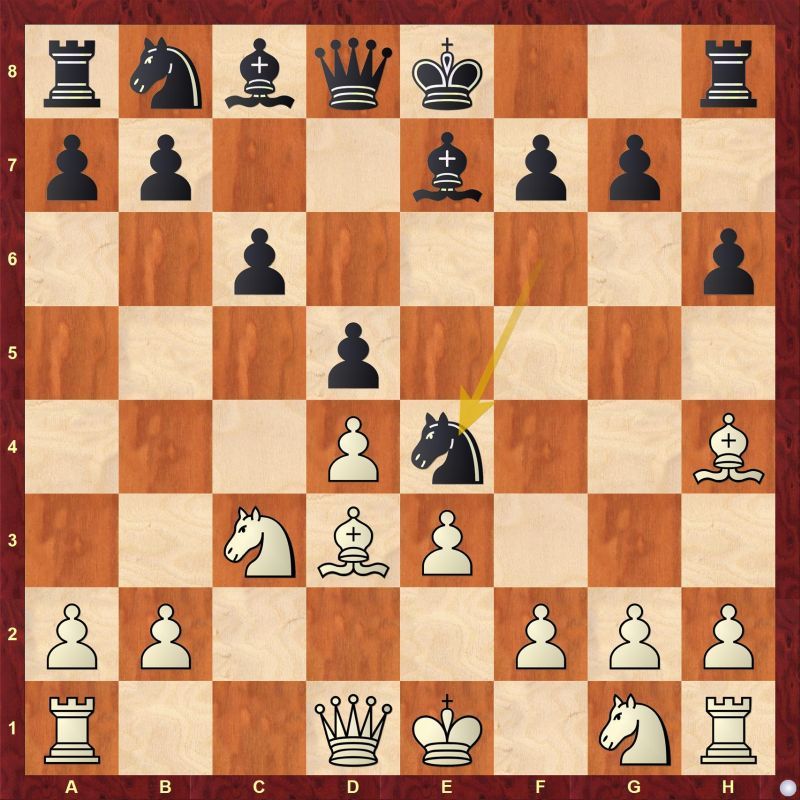 It is unclear why Ju went for this line. At the press conference, Ju admitted that after 17.dxc5 she felt that the game was getting out of hand and she struggled to come up with an equalizing plan. 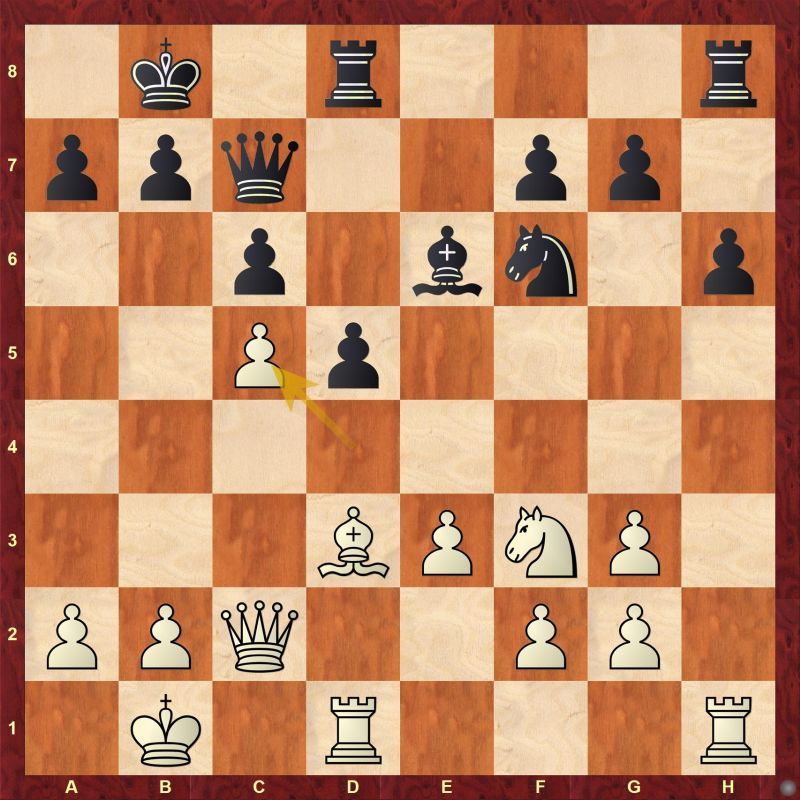 Goryachkina continued to push, while black seemed to always go for safer, more passive options when presented with an option to either play intuitively or defend. A good example of this was 25... Qg7, protecting a dead-weight h-pawn, instead of a much more dynamic and intuitive 25...Nd7 — a reflection of how Ju has played this match. 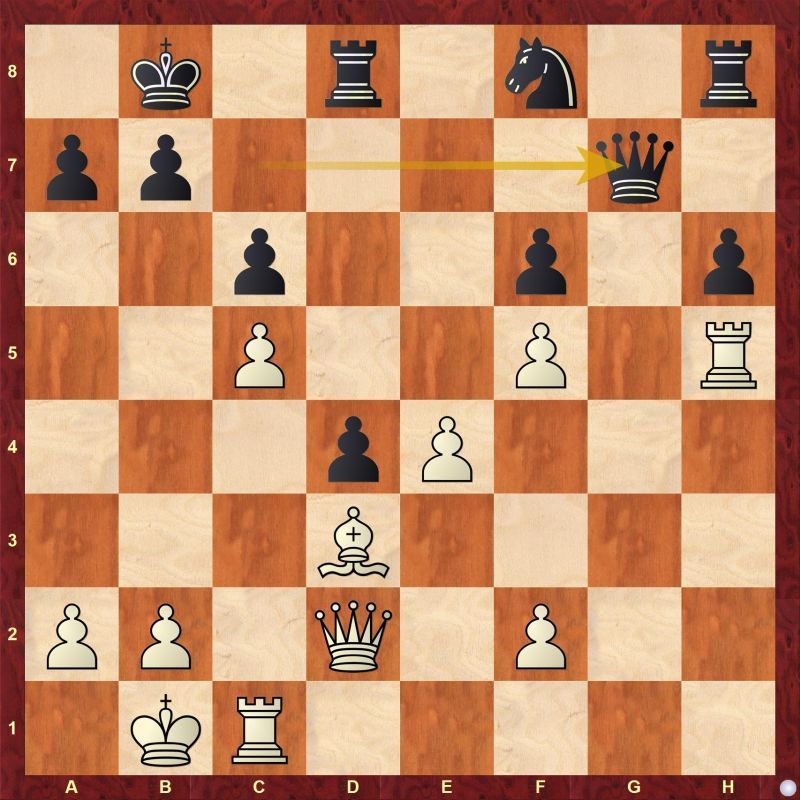 Game after game, around move 30, Ju has a choice between going with her gut and intuition, she seems to be choosing a much safer, less opportunistic option. 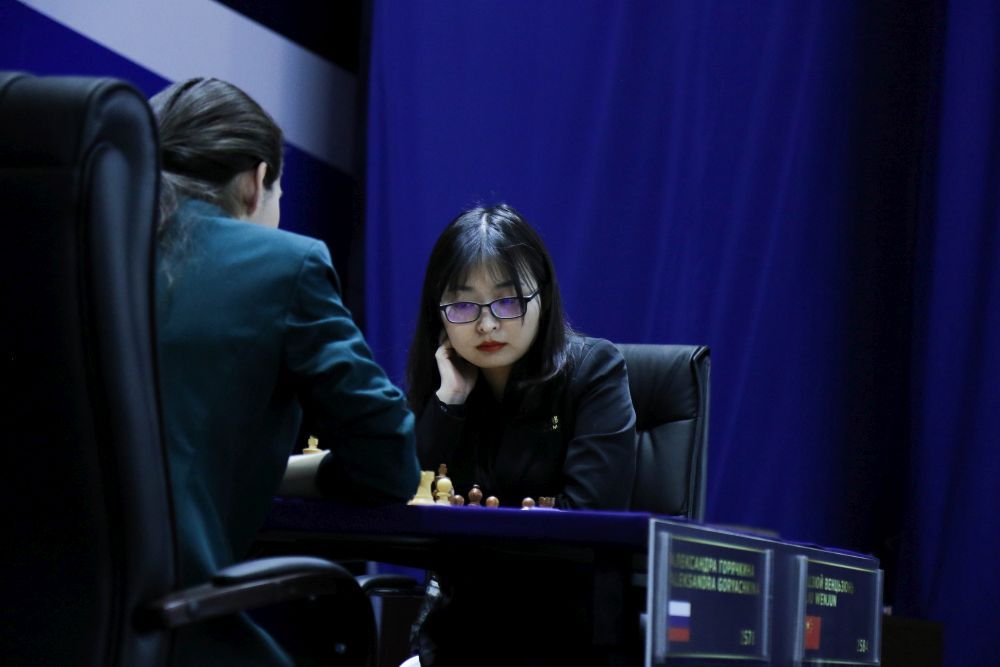 Can Ju bounce back from the defeat? | Photo: Eteri Kublashvili / FIDE

Presented with a golden opportunity, Goryachkina played extremely accurately. She was not perfect: 32.b5! would have ended the game on the spot, before the time control. 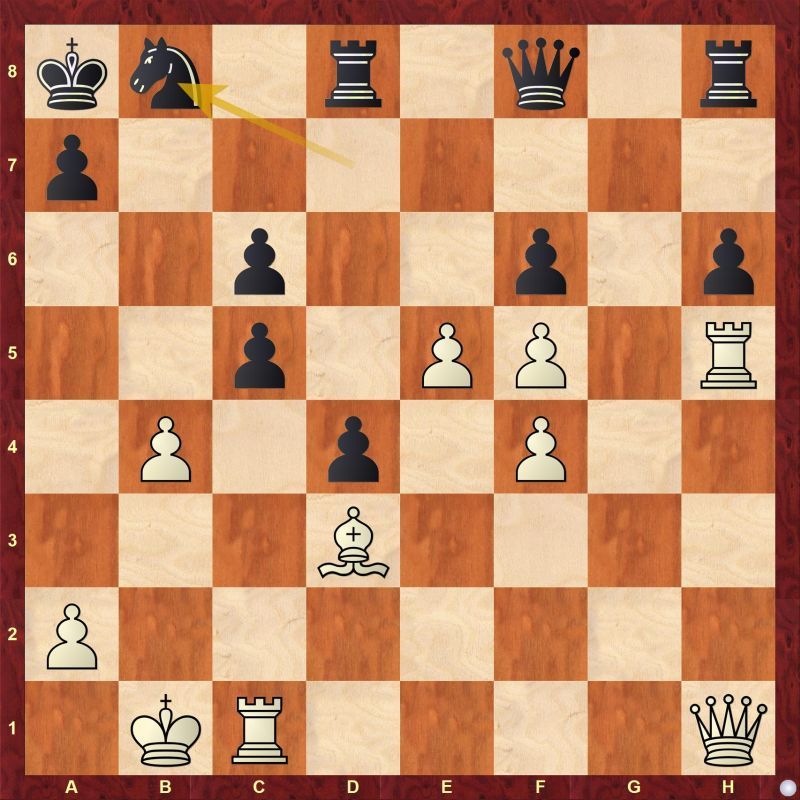 Goryachkina needed to go with 32.b5 to finish it faster

Nevertheless, 32.Be4 was good enough and Aleksandra was still winning. Goryachkina felt that after 37.e6 this was a game she was not going to let go.

The next game is a test for Goryachkina. For the first time in the match, she is now the hunted. The hunter, suddenly, this is her World Championship to lose. In a huge psychological shift, we will now see what Goryachkina is truly made of. Will she be nervous? How will today's result impact her opening preparation? What about Ju? Does she have it in her to play winning chess? A player known for aggressive, tactical brilliance, how will she react to being four games away from losing her title? 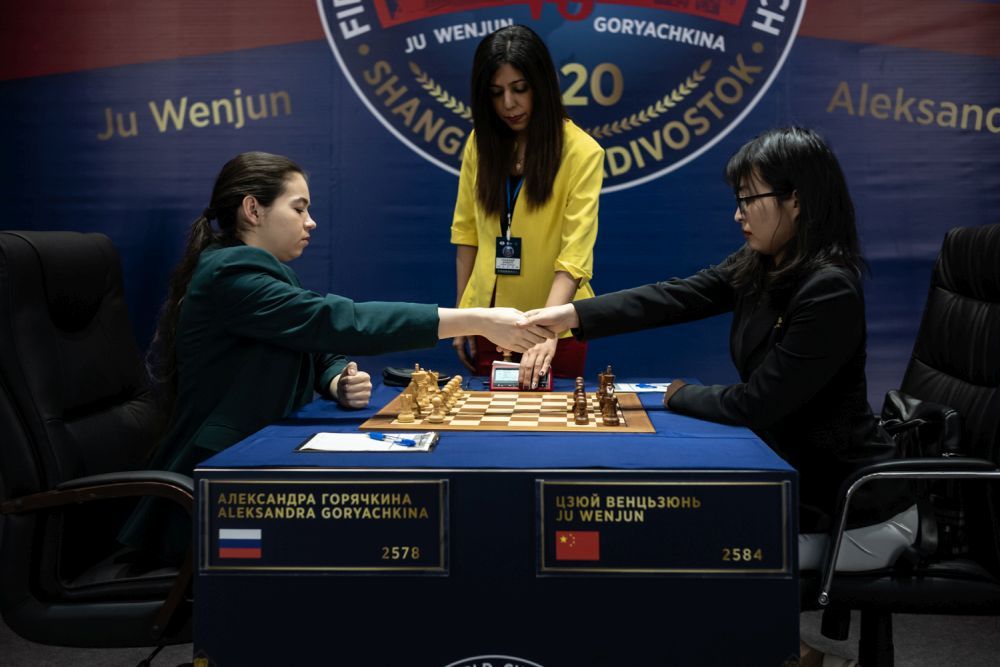 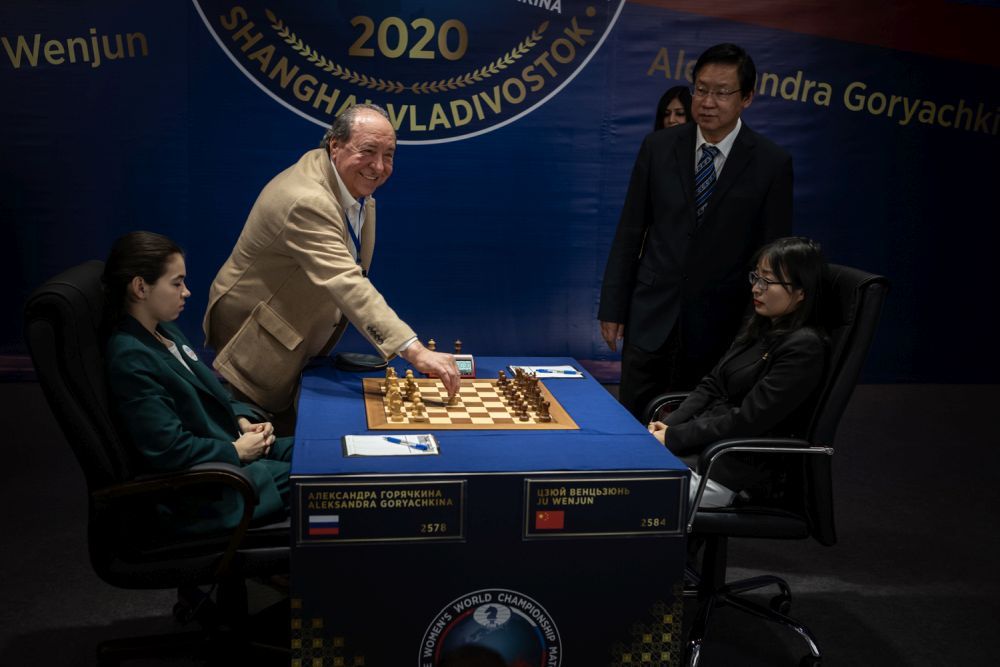 Ye Jiangchuan, President of the Chinese Chess Association and FIDE Vice-President, together with Efim Zvenyatsky, Art Director of the Gorky Drama Theatre made the first symbolic move of Game 8 | Photo: Michael Friedman / FIDE 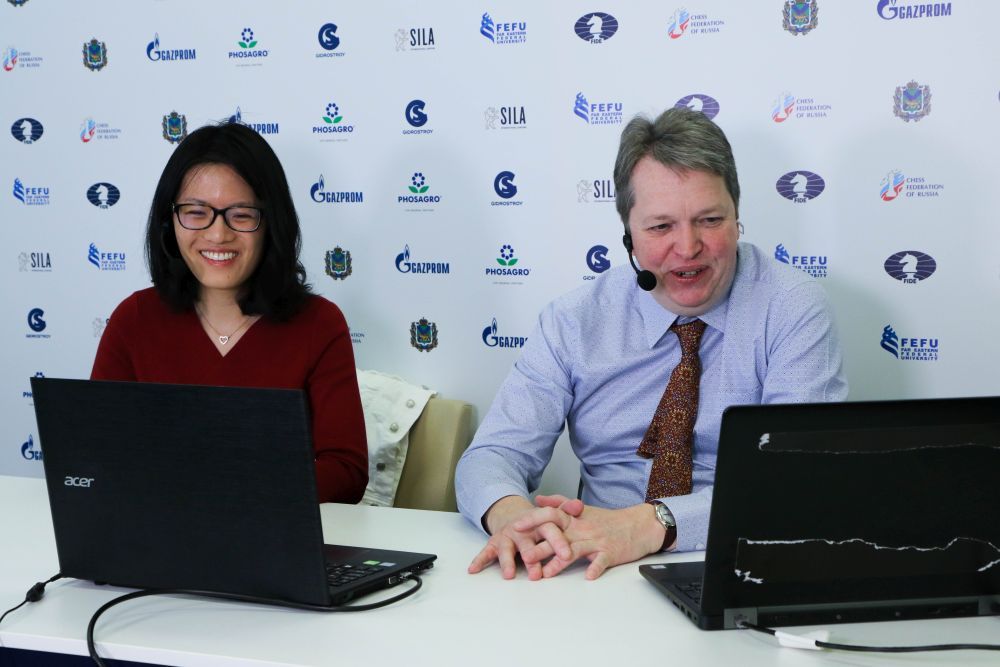