Christopher Yoo - this 12-year-old chess composer will baffle you!

There are many chess prodigies in the world today but Christopher Yoo, the 12-year-old International Master from USA, stands out among them for his unusual precocity in chess composing. Perhaps, his talent in this field is comparable to the great American puzzle maker Samuel Loyd, who too became phenomenally successful in composing at a very early age. Presently there are not many youngsters interested in chess composition. The record of becoming the youngest ever Grandmaster of chess composing is held by Reto Aschwanden of Switzerland who earned the coveted title in 2010 at the age of 36 and that's quite late by the standards of over-the-board chess. Some say that the subtle understanding of abstraction and beauty comes only with age. Be it what may, for now it can safely be said that we have found someone very exceptional in our midst in Christopher Yoo! 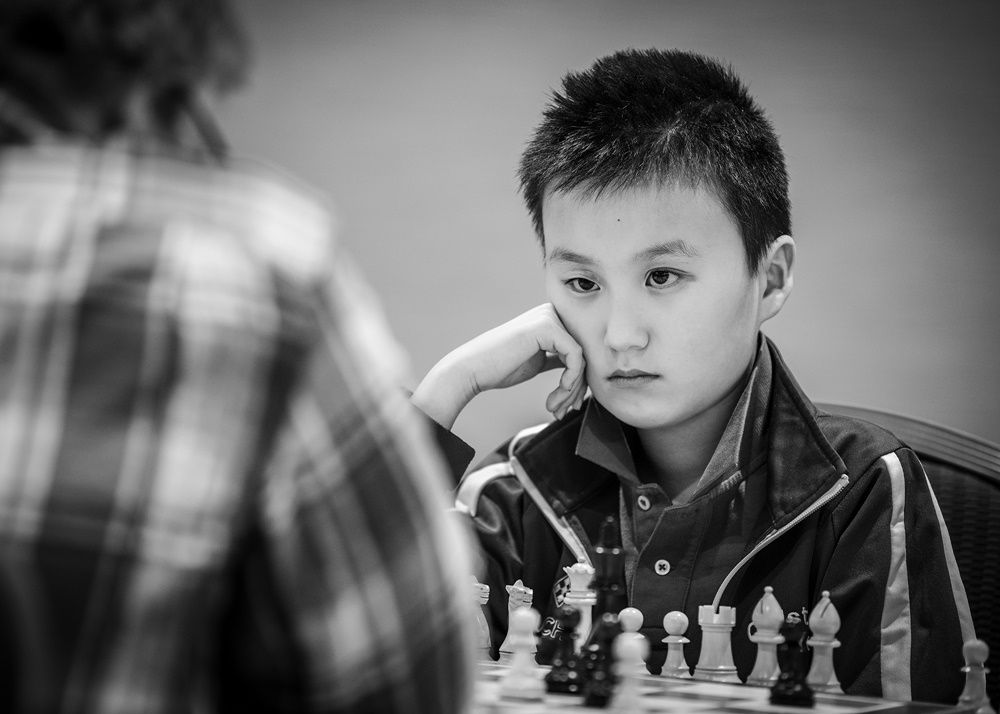 Few 12 years old can boast to have reached the heights that Christopher has attained in the world of chess today. In this article however, we discuss not his achievements in over-the-board play but his knack for another fascinating aspect of the royal game - composition!

Christopher secured 3rd prize in the "win" category and a special honourable mention in the "draw" section in his very first composing tourney. The event was Helmut Steniczka Memorial Tournament 2019 and the 12 years old faced competition from seasoned masters of study composing such as Pavel Arestov, Alexander Zhukov, Darko Hlebec, and more. In addition, one has to also take into account that in composing tourneys two or more composers often work together to create problems or studies jointly. Therefore, to make a mark solely on individual effort and that too on the very first try is no mean feat. Let's begin by examining his study that won 3rd prize in the win category. I bet, you would be surprised to see the maturity of content in this production! 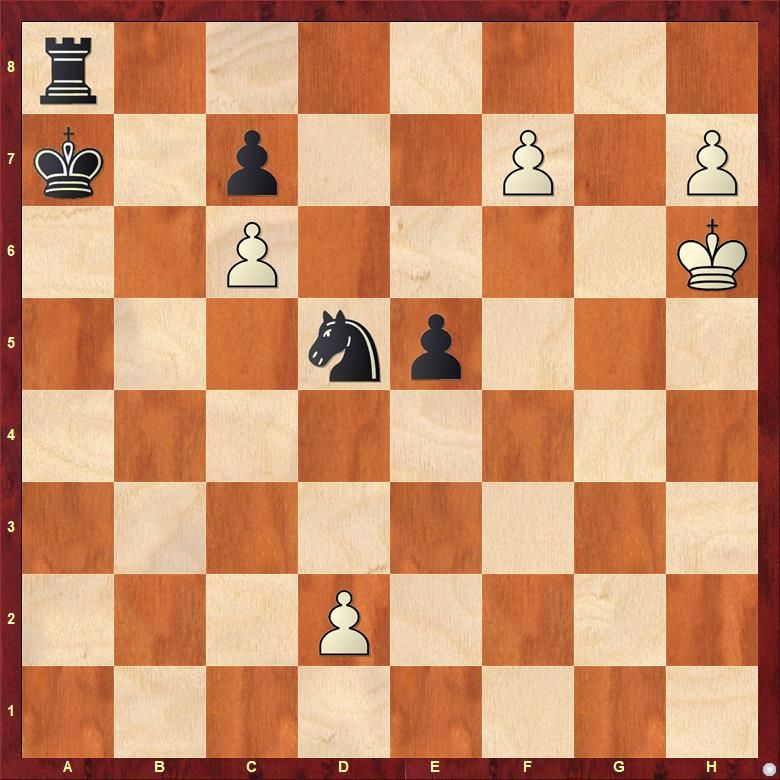 White has two pawns on the seventh rank just one move away from promotion but does that compensate for a rook and a knight? The solution begins with 1.Kg7 Nf4 and now already it seems Black is winning here for there is no way to queen the pawns, if 1.f8Q then there's 1...Ne6+ fork. And if h8=Q then black takes it and plays Ne6 to stop the f-pawn. But White comes up with this surprising resource 2.f8=N! 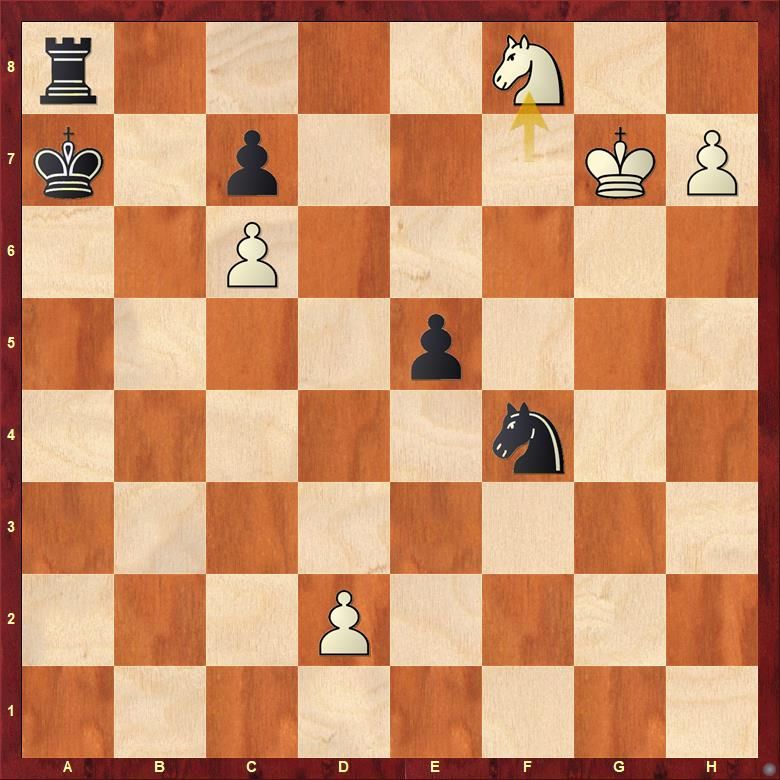 White's winning idea lies not in queening the pawn but under-promoting it to a knight!

The play continues 2...Kb6 3.Kf7! and now White threatens to queen the h-pawn. Careful, 3.h8=Q would be premature as after 3.Rxf8 whichever way White captures the rook on f8 there comes either Ne6+ or Ng6+ fork. 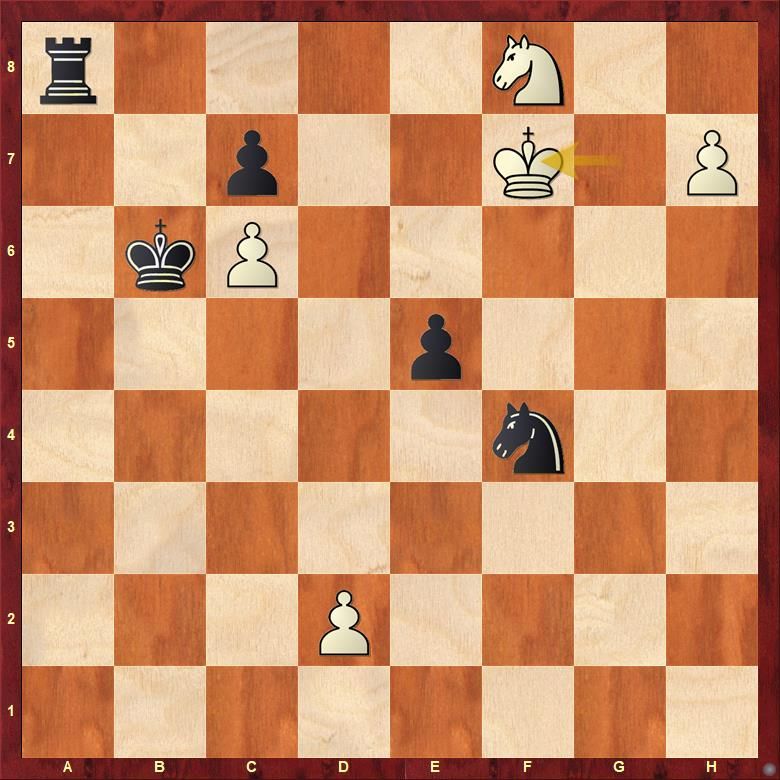 With 3.Kf7 White threatens h8=Q, what should Black do? 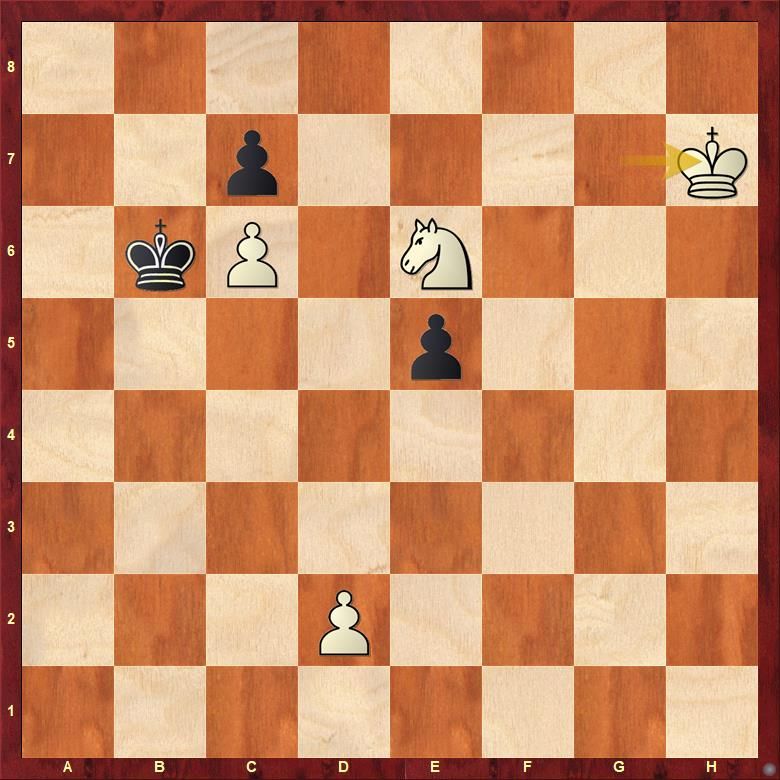 This is what makes the study quite difficult to solve. Many will stop calculating after reaching this point in their analysis but here's where things get tricky. Black has got one last practical try and White has to be extremely cautious! 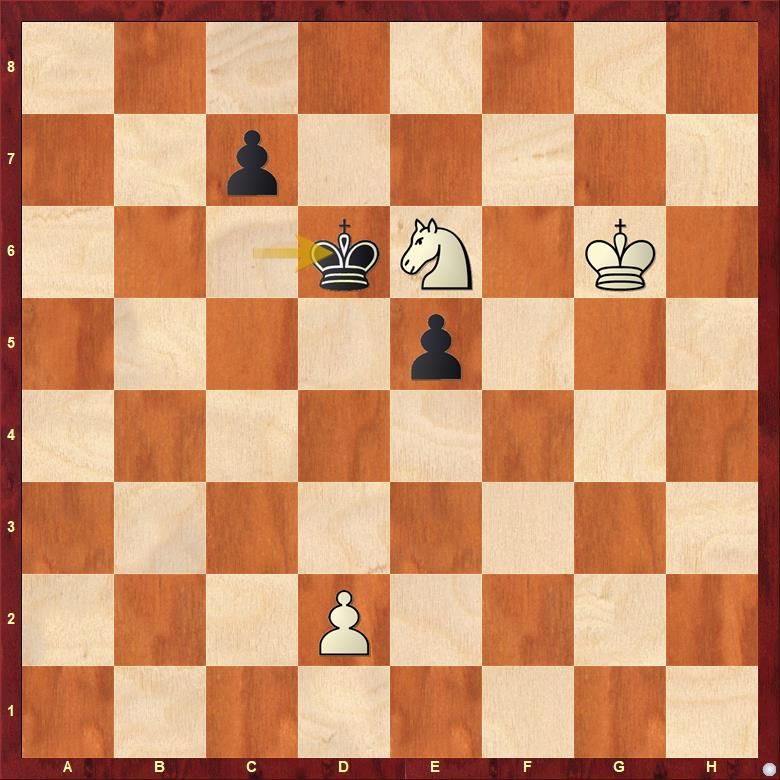 Black has just played 7...Kd6, what would you do here if you were White?

Well, the most instinctive reply would be 8.Kf5 and there in lies the trap! After 8...Kd5 9.d3 c6 we have now the classic case of reciprocal or mutual zugzwang - that is, the side who is to move (White in this case) is in zugzwang! 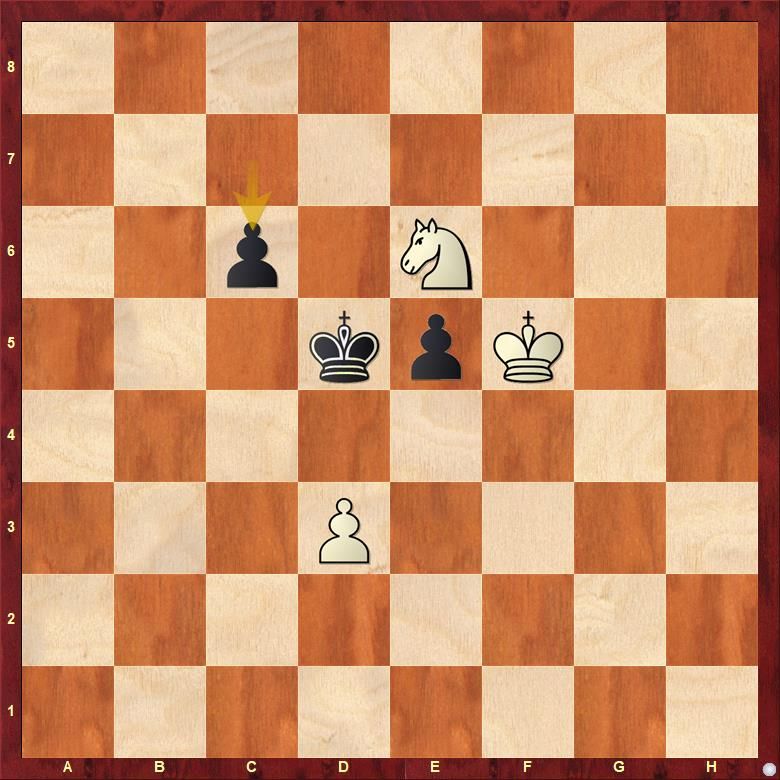 The correct move, instead of 8.Kf5, is therefore 8.Kf6! not the move you would normally choose in an over-the-board encounter, but after 8...Kd5 9.Kf5 c6 10.d3 the point is clear - we have reached the same position as after 8.Kf5 but it's now Black's turn! 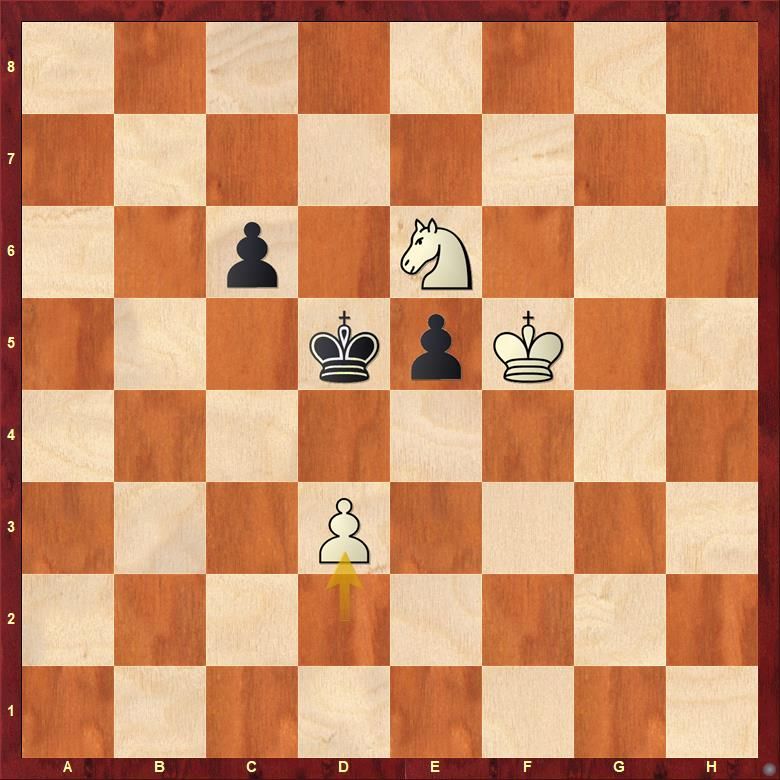 After 10.d3 the position is same as the previous diagram but with one crucial difference, it is now reciprocal zugzwang with Black to play.

When did it all begin for Christopher?

His father Mr. Young-Kyu Yoo, who used to challenge him by asking to compose mate problems, says that he has been creating puzzles sporadically over the years. He took his first steps as early as 2014 when he was just 7 years old and had no FIDE rating. But most of all, growing up as a chess player, he has always taken a keen interest in study solving. His favourite book is Oleg Pervakov and Mark Dvoretsky's classic text Studies for Practical Players. 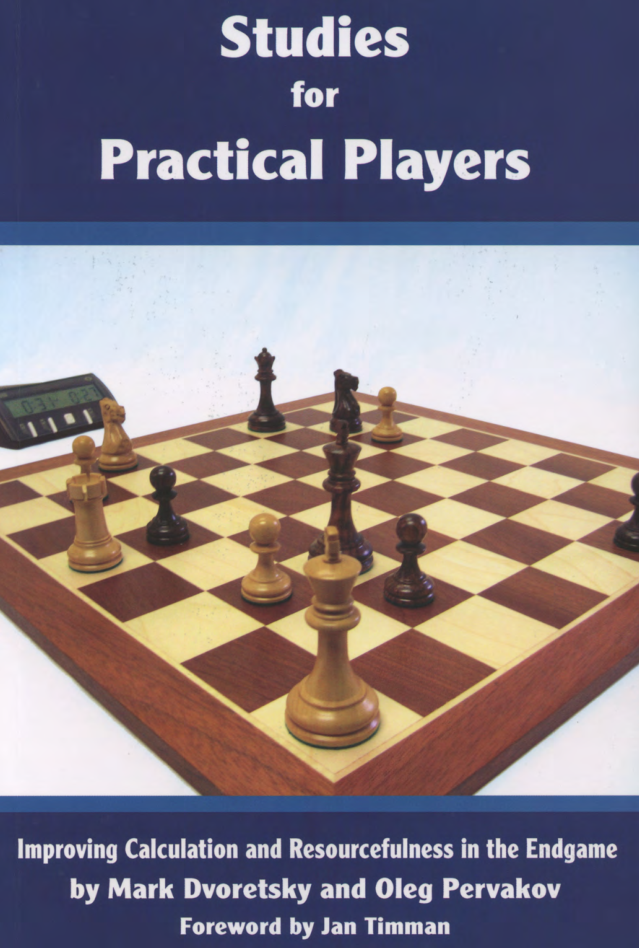 Christopher has always been a voracious study solver and has worked through the entire content of this book!

Hence, the seeds were always present but the first fruits sprouted only in January of this year when he clinched his final IM norm in the Bay Area International by defeating super GM Le Quang Liem. He composed a study and became hooked to compositions after that. Not long after his interests and talent in composition was spotted by the well-known Danish study composer Steffen Slumstrup Nielsen who then guided him through the technicalities of this field and encouraged him to participate in tourneys. Well, we can't be more indebted to Mr. Nielsen, for soon enough at the end of February, Christopher went on to bag another 3rd Prize and this time in the prestigious FIDE World Cup of composing! Let us now have a look at this output of his. 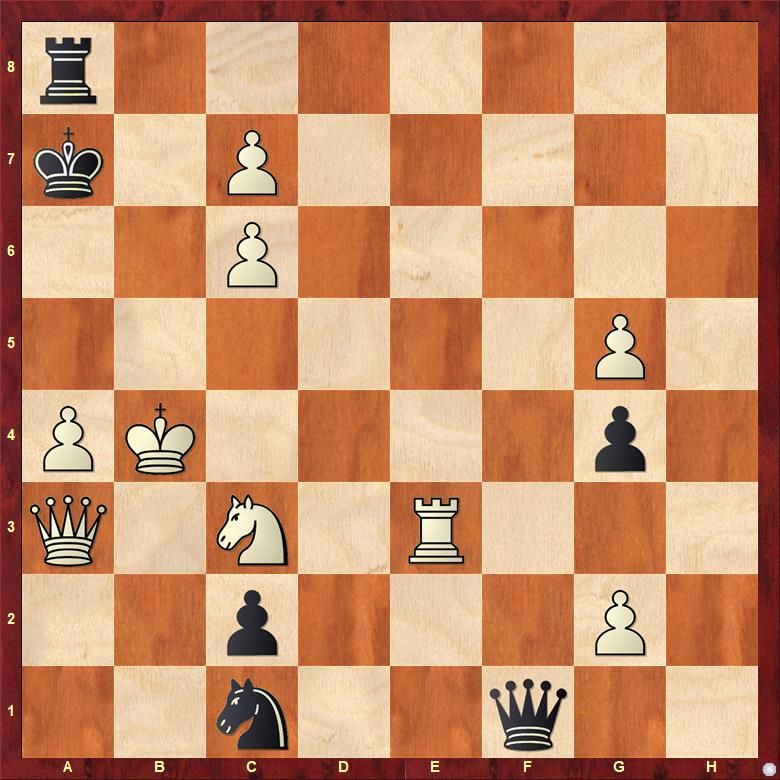 A tactically charged complex position where both kings are susceptible to come under heavy onslaught. For instance, something like 1.Ka5? loses at once for White: 1...Nb3+ 2.Qxb3 Qa6+ 3.Kb4 c1=Q and Black is winning. 1.Re5 therefore might seem to be White's most logical try, looking to exploit Black's weakened king immediately, but it turns out that after 1...Kb6! (check annotations below for detailed analysis of this line) Black somehow holds. The key instead is the spectacular move 1.Re1! this decoys the queen out of the critical f1-a6 diagonal. Black has to take 1...Qxe1 and now comes 2.Ka5 (compare with 1.Ka5 try) 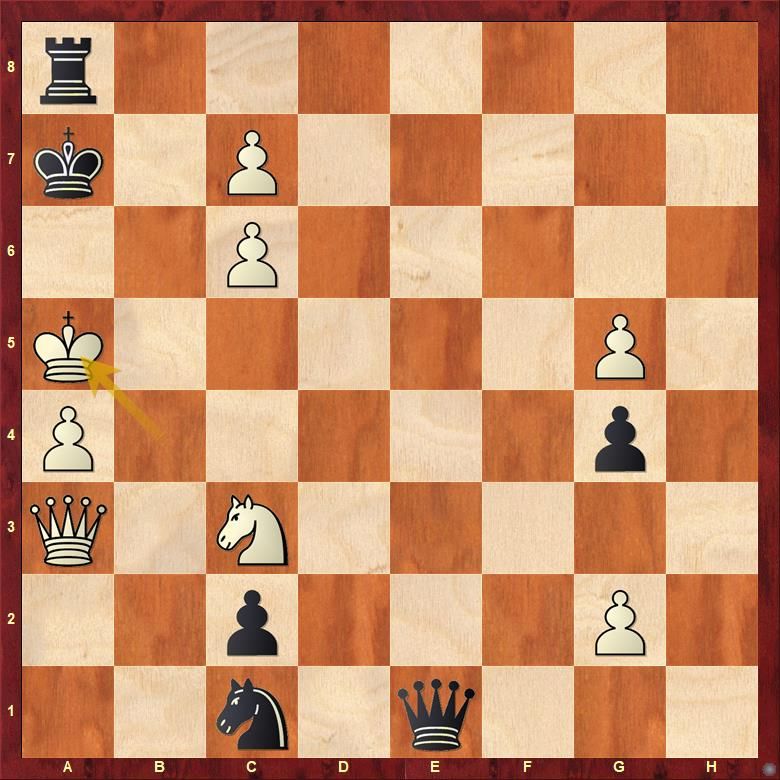 2.Ka5 comes with the concrete threat of 3.Qc5# - What should Black do? 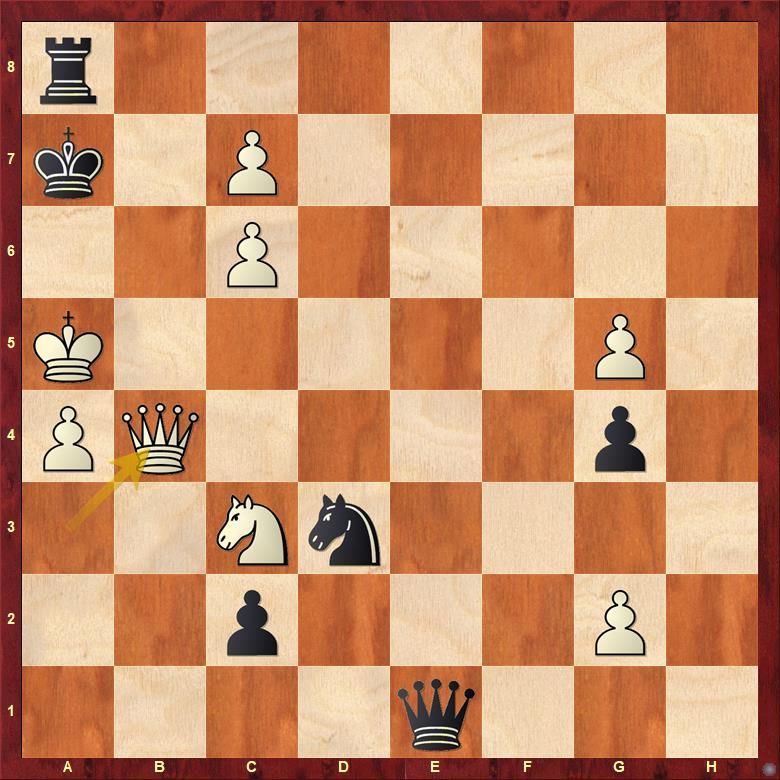 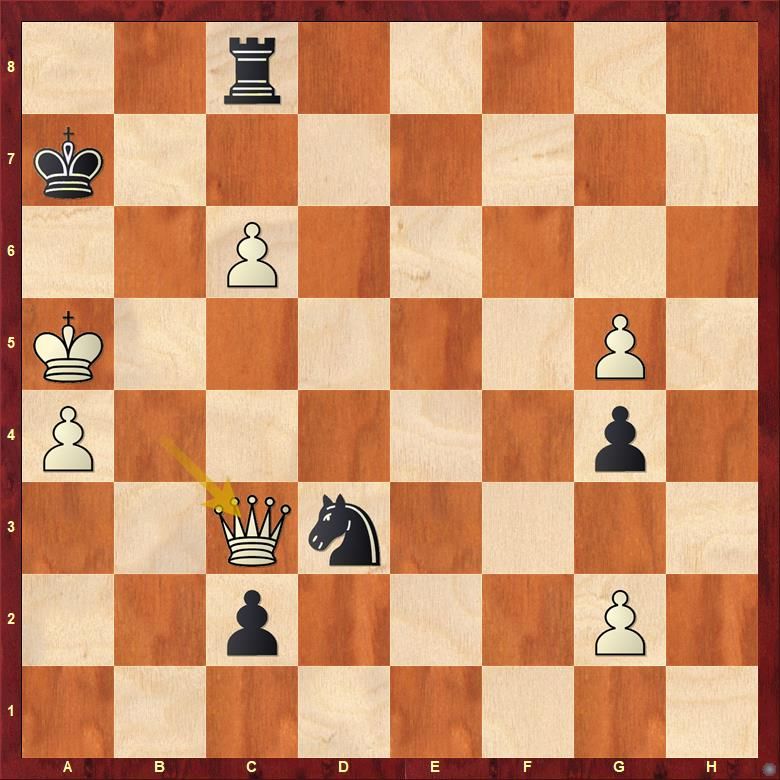 Position after 5.Qxc3: What is the most testing move Black can play in this position?

We have seen how 5...c1Q is out of question here but Black has to figure out a way to queen that pawn eventually. The right move is 5...Rxc6! and only after 6.Qxc6 Black pushes 6...c1Q 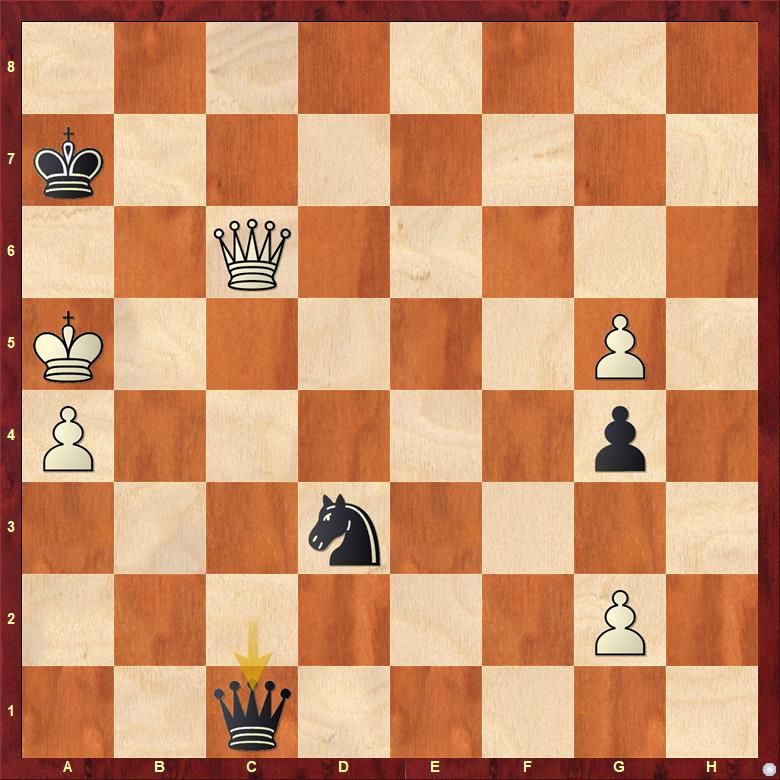 An enthralling episode, as the judge Vladislav Tarasyuk comments, "A heated and intriguing encounter between the two sides, which are quite generous in spectacularly sacrificing the quartet of their major pieces". Take note, many of Christopher's idols (Such as Oleg Pervakov, Yochanan Afek, and even Steffen Nielsen himself) took part in this competition!

Christopher says that his process of composing a problem typically involves coming up with an idea and then trying to add twists to it. He does this either in his head or while fiddling with pieces on a chessboard. It generally takes a few hours to a few days to come up with the final product. He likes to be independent and feels that drawing inspiration from other composer's work tend to make his own less original. But in any case, he enjoys Studies by likes of Pervakov, Afek, Nielsen etc very much. 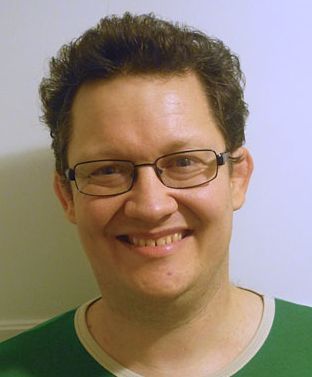 Steffen Nielsen helped Christopher to learn the conventions of the composing art and encouraged him greatly to participate in this year's World Cup. Recently, he himself was awarded the Bronze medal in the studies section of the World Championship in composing for individuals | Photo: arves.org 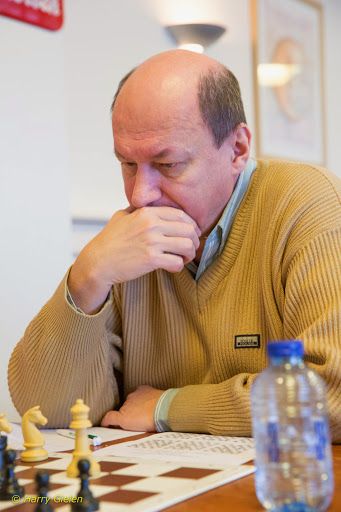 Oleg Pervakov is the old and the new world champion of endgame studies. He is a living legend and is considered to be one of the greatest study composers ever. 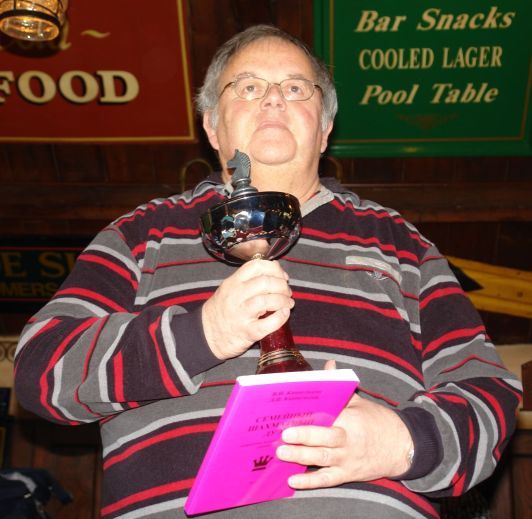 Christopher shares one of his favourite compositions by Pervakov, a latest masterpiece! 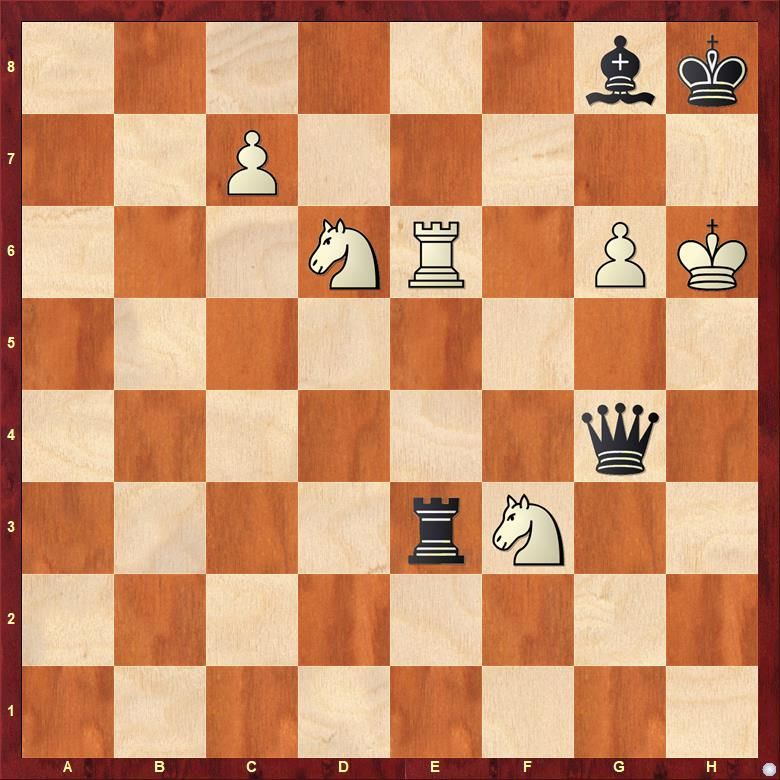 The above is a quintessential Pervakov study showing rapid combinative play on the theme of overloaded pieces, stalemate avoidance, and reciprocal zugzwang. Below we present a detailed solution:

“All I did was start composing myself and I started liking it. It’s as simple as that”, says Christopher! 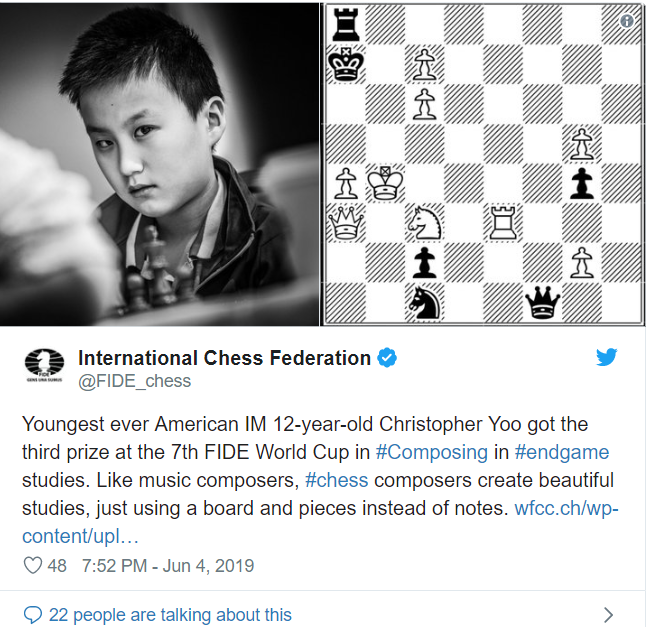 Christopher doesn't think composing particularly helps his over-the-board performance. A coach of his even says that it isn't good for his tournament play. But despite this he loves delving into chess composition from time to time. He is currently busy playing tournaments and is aiming to get his GM norms. We of course wish him every success in that endeavour but as problem enthusiasts we will be waiting for him to return to composing. Hope he does that soon and gifts us with more masterpieces! 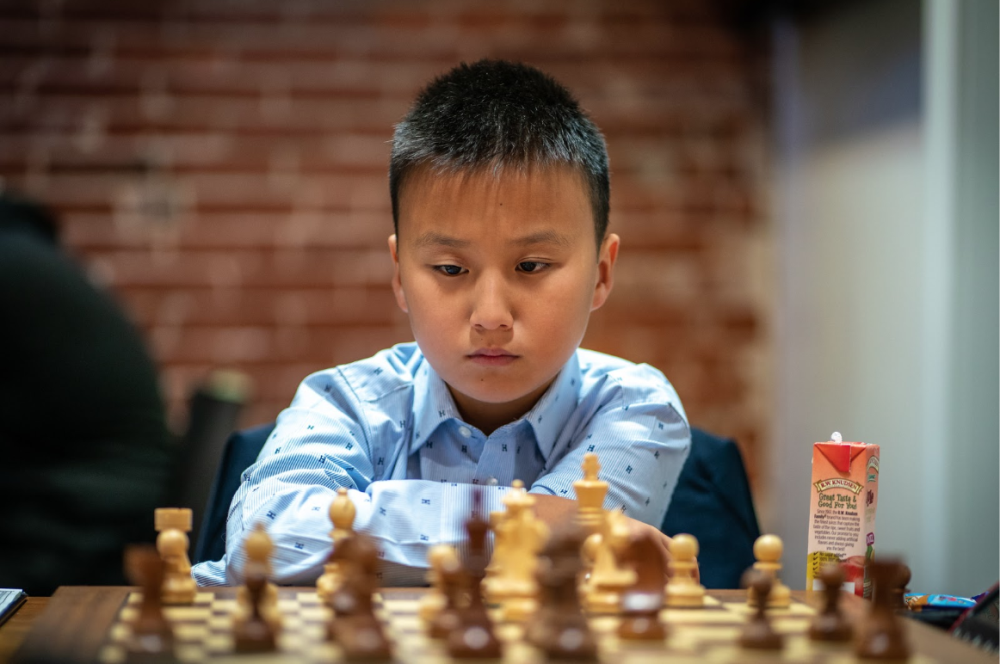 Fighting it out at the Fall Chess Classic in St. Louis | Photo: Eric Rosen 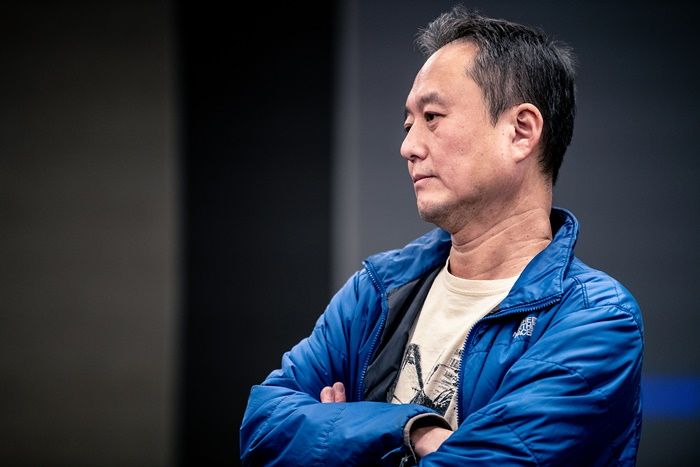 Christopher is accompanied by his father Young-Kyu Yoo in tournaments. Mr. Yoo has been kind enough to provide all the information the author needed to write this article | Photo: David Llada
Related news: