Round 4 of the Tata Steel Masters 2021 had all the seven games ending in draws. Hence the leaders at the top remained the same - Harikrishna, Caruana, Carlsen, Giri and Grandelius. However, things were not at all simple in all the games. In fact Harikrishna was on the backfoot for a long duration against Caruana. It seemed like the world no.2 was well and truly on track to scoring a win. However, Harikrishna fought with all his might and was able to trick Fabiano. How did he do it? This entire sequence has been analyzed in this article by IM Sagar Shah. Check out our illustrated report from round 4 of the Tata Steel Masters 2021. 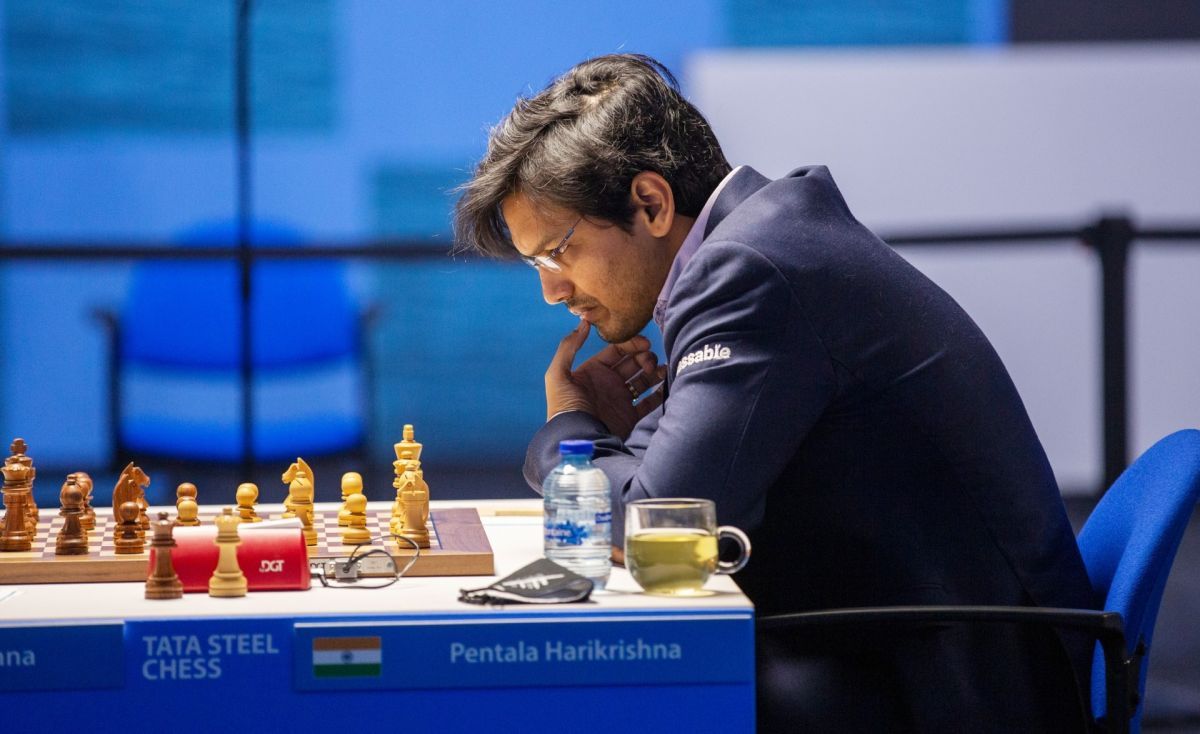 Imagine a situation where you are under deep pressure. Sitting opposite you is the current World no.2. He is playing his moves confidently and your position looks quite suspect. 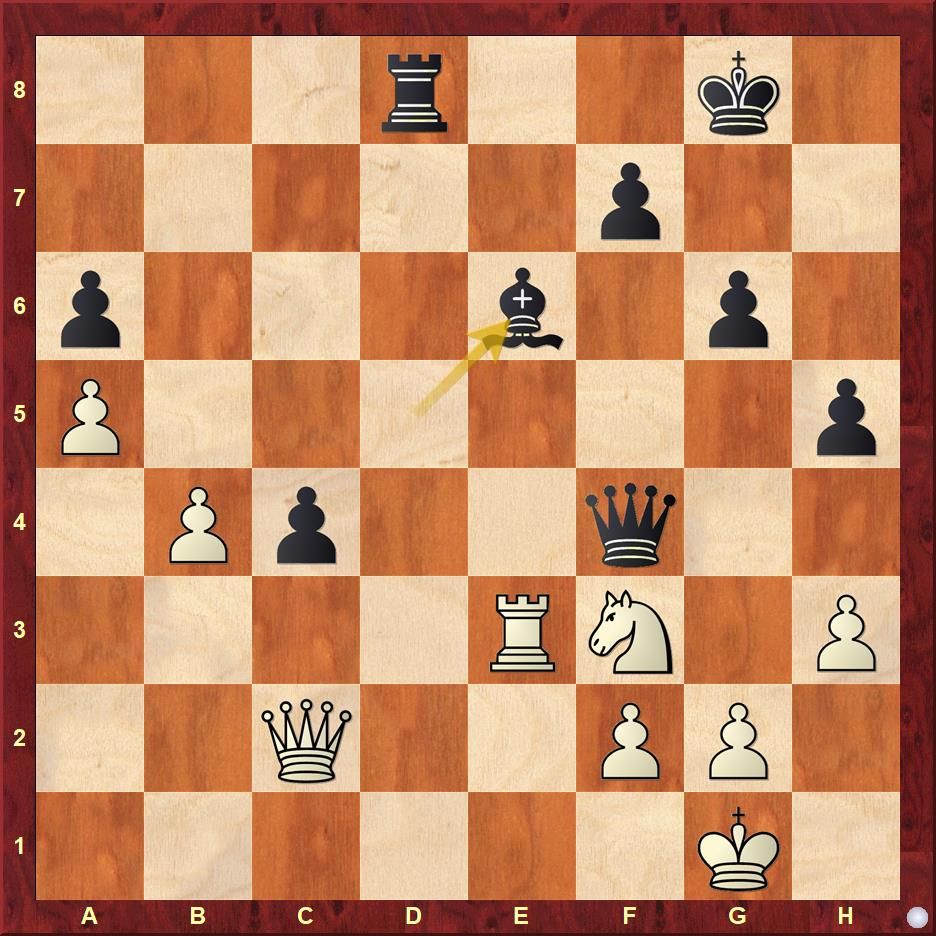 Just a glimpse at this position is enough to convince you that Black is better. He has a powerful passed pawn on c4, protected by the bishop on e6. The knight has no real outpost in the position.

You now have two options at the board. Think about what went wrong in the opening that you ended in such an inferior position. Or, you think about how to create maximum chances in the position. There are players who often try to delve on their inaccuracies. These are not the players who reach a level to be invited to Wijk Aan Zee. Harikrishna was well aware that he was worse in the position, but he decided to find the maximum chances for himself. 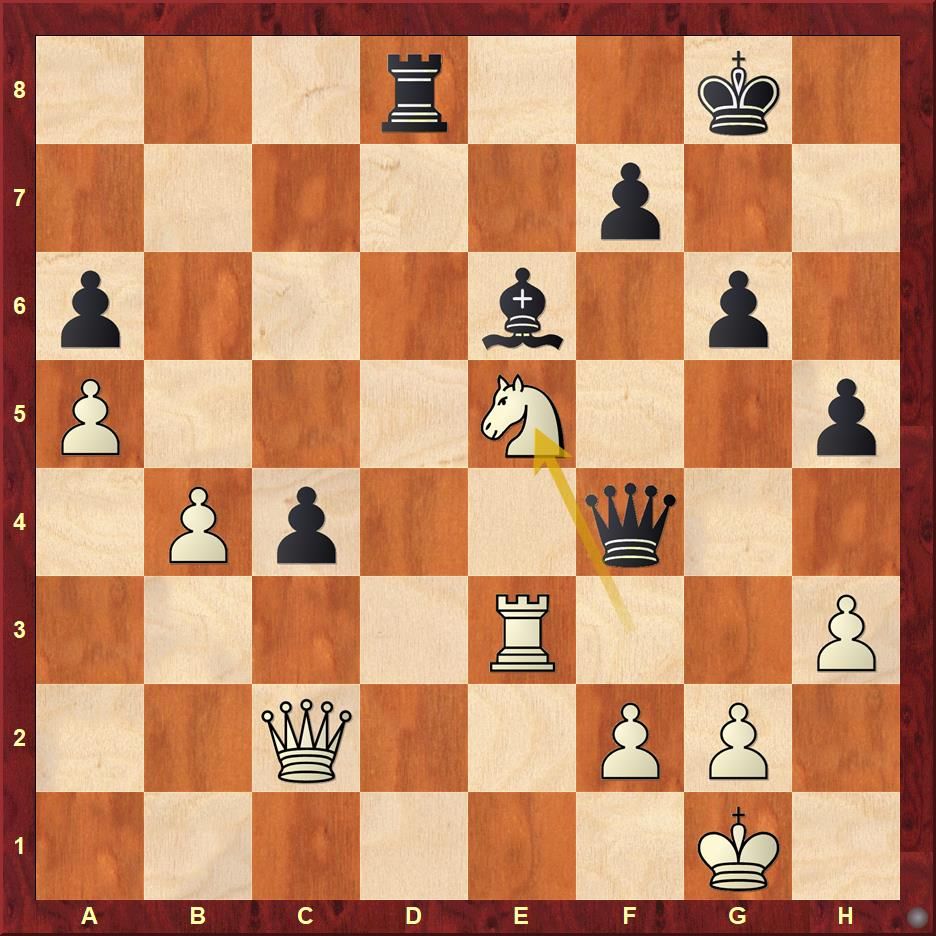 Caruana thought for a while. Of course the first thought that would have crossed is mind is how to deal with Nxg6 ideas. He had a few options up his sleeve. One was to move to bishop to d5. But the bishop had come to e6 from d5. Bf5 was another possibility in the above position. However, after Qe2, you once again have to think about the c4 pawn. A very computer like solution (in the above position) was to play Rd6! The point being that after Nxg6 fxg6 Qxg6+ Kf8 the bishop on e6 cannot be touched because of a backrank mate on d1. Caruana thought about all his possibilities and made his next move. 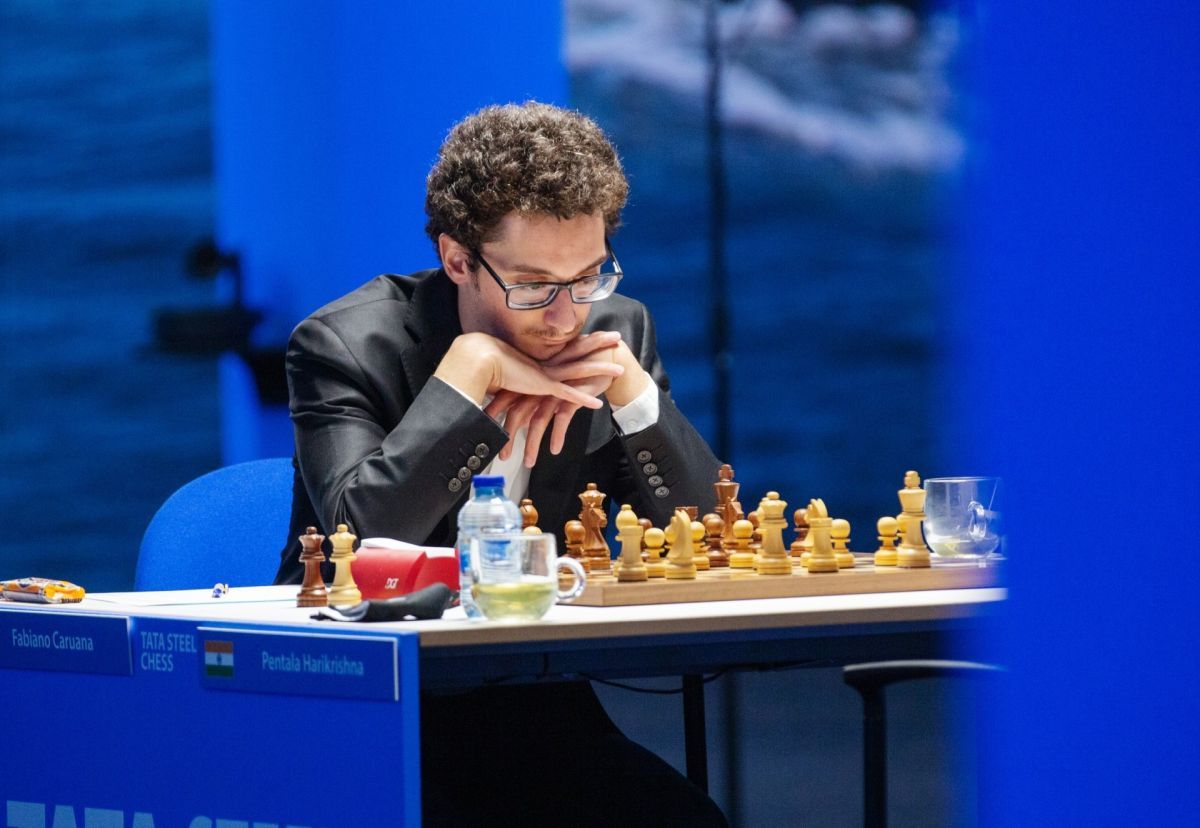 Fabiano Caruana has been in amazing form at the Tata Steel Masters 2021. The level of chess he has shown in the first four rounds could have very well earned him 4.0/4 in any other event! 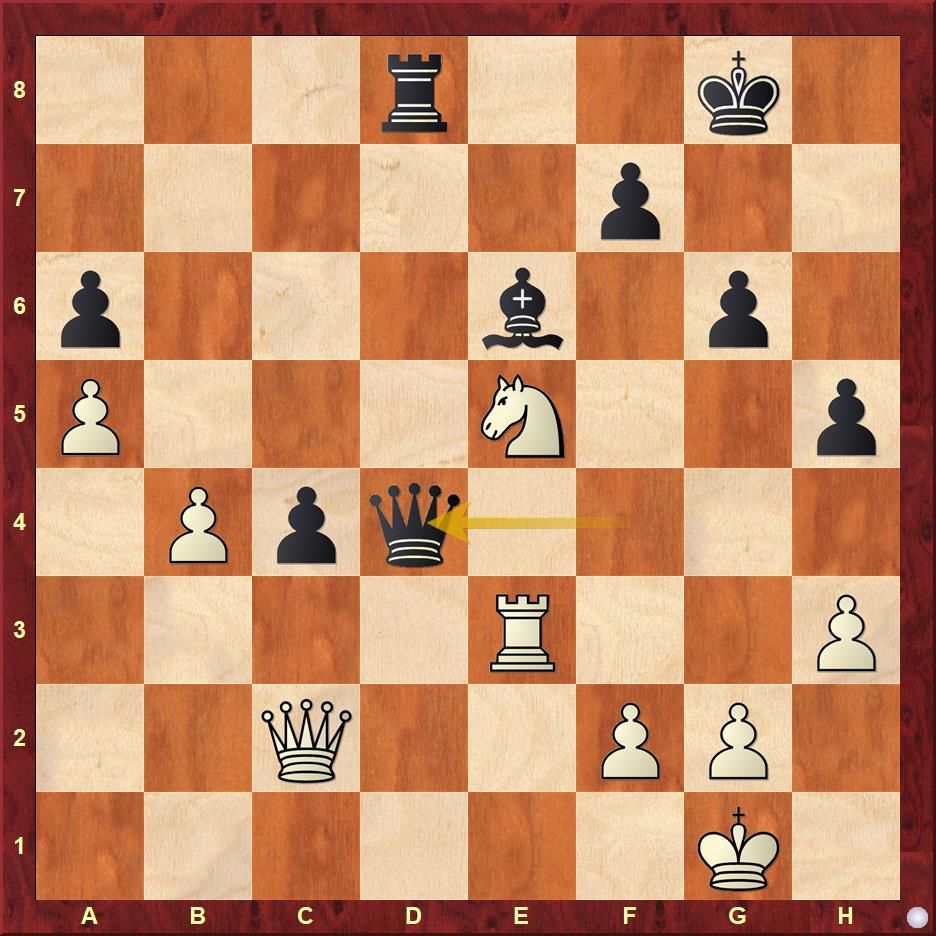 Caruana played his queen to d4.

The first question that comes to the mind of any player is why can't I take the pawn on g6. But then you spot the point behind Caruana's concept. To Nxg6 he would like to play Qd1+ Qxd1 Rxd1+ Kh2. 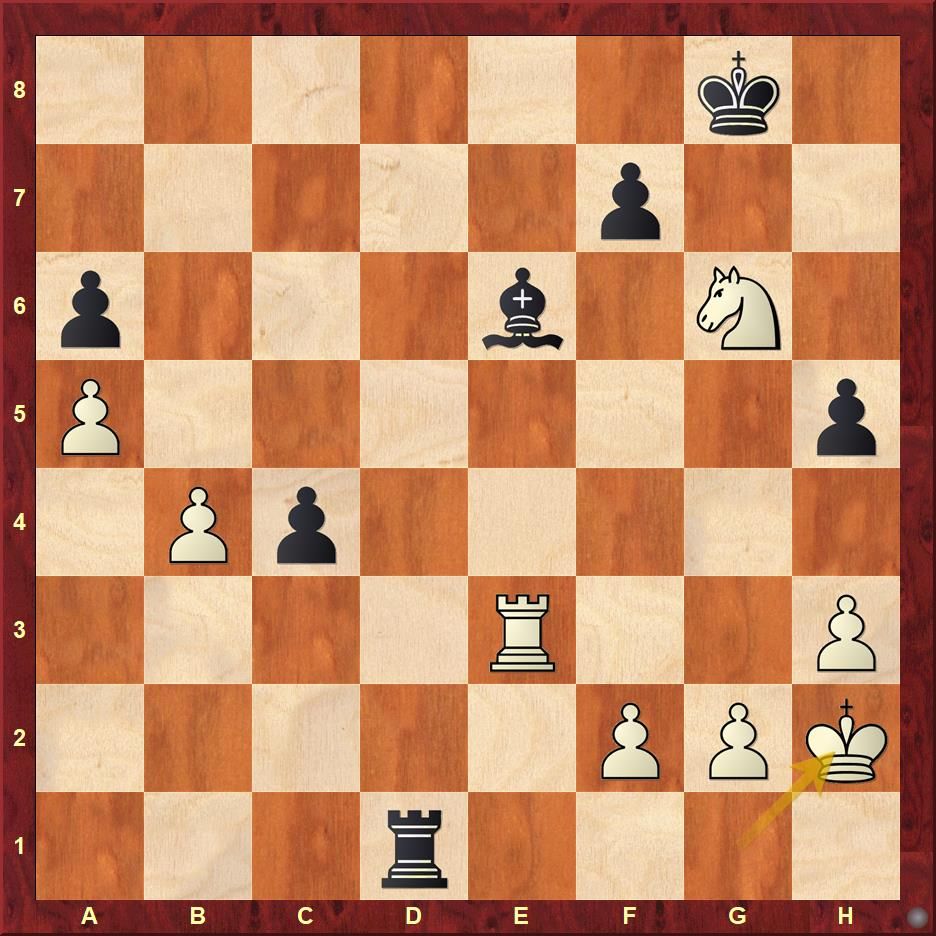 The knight still cannot be taken as the bishop on e6 would hang. But Caruana had the move ...c3!? planned here.

If you take Rxc3, after fxg6 you simply lose a piece. At this moment it might be the right time to go back to Qd4 position and think about something else. But Harikrishna hasn't reached where he is right now by just believing his opponents! He has faith in his calculations and he called Caruana's bluff! He went down the line ...c3 Rxc3 fxg6 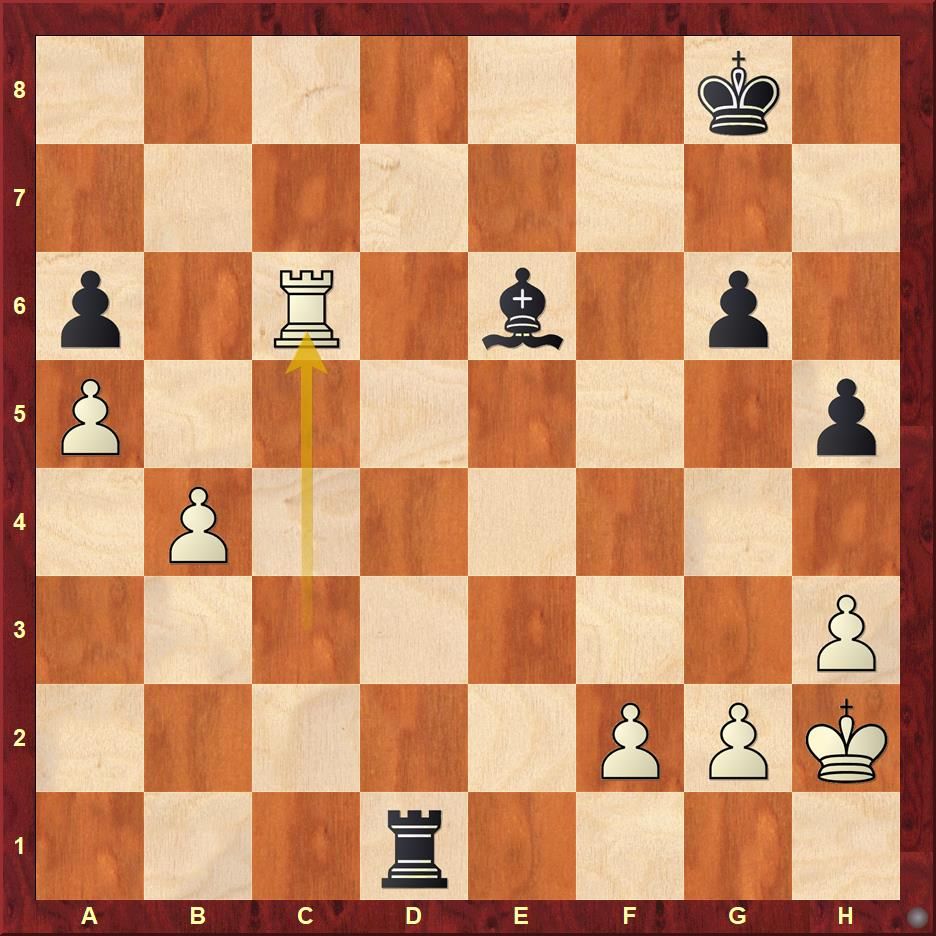 And now Harikrishna plonked his rook to c6. A powerful move which wins him his third pawn. After Kf7 Rxa6 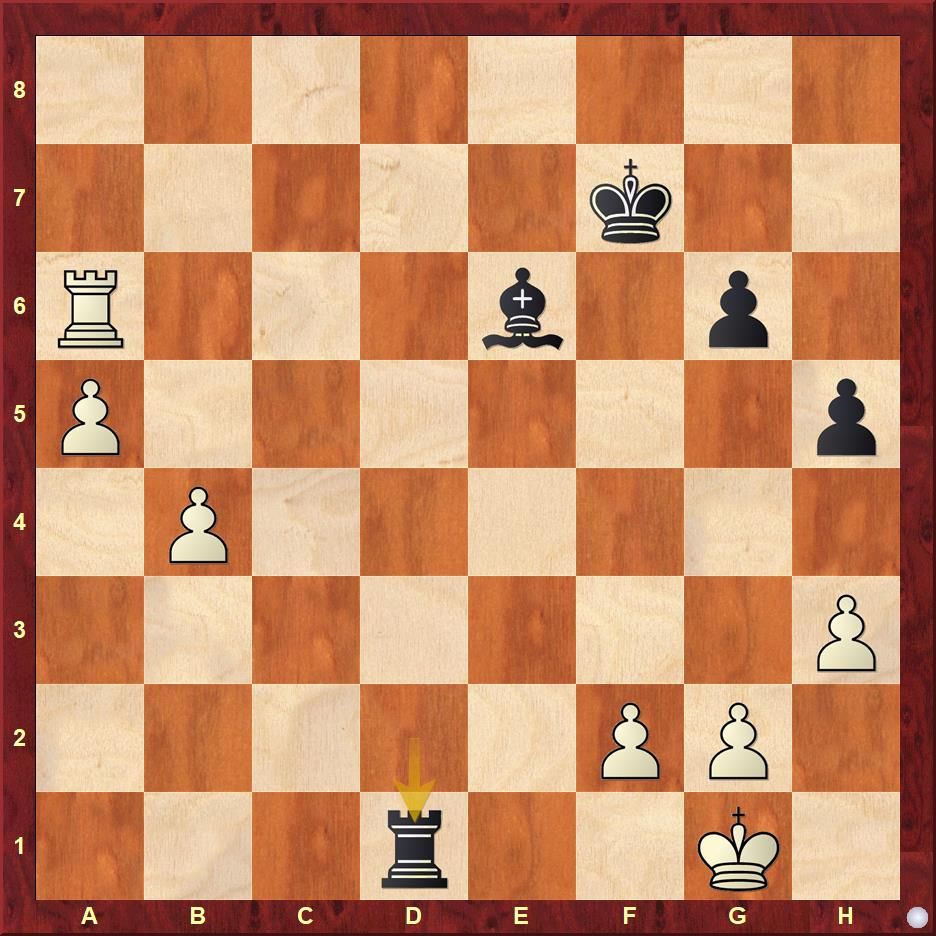 Caruana decided not to test the position any further and went for a Rd2 Kg1 Rd1 Kh2 Rd2 - draw by three-fold repetition.

This entire part of the game might have lasted only a few moves, but it shows in ample measure what a fine player Harikrishna is.

1. He doesn't give up when his position is bad and always tries to keep finding his chances.

2. He doesn't believe his opponent's calculations

3. He believes in his own abilities 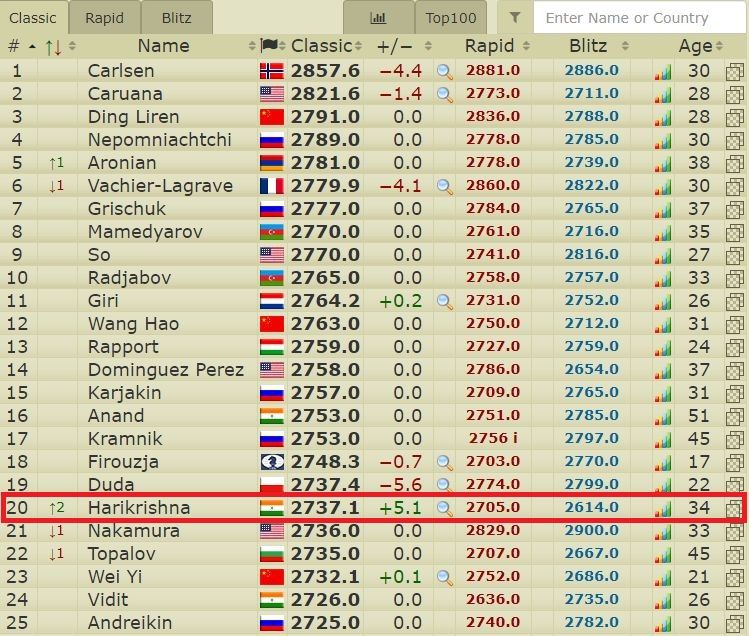 For his grit and fighting spirit, Harikrishna has now reached world no.20 ranking on the Classical FIDE Elo list

How did Harikrishna reach an inferior position? The game is annotated in depth below:

Magnus Carlsen is trying hard, but his opponents are not giving him an opportunity to break through. Jorden played a very solid opening and drew the game.
Magnus' opponents are giving him no chance to play for a win. The World Champion is also not particularly thrilled with his play!
Grandelius had a great opportunity to move into sole lead. He had a totally better position out of the opening against Esipenko. But he took a lot of time for his moves and in the end he had to settle for the half point.
2.5/4 is a score that Grandelius Nils would have taken any day before the tournament begun!
The most exciting game of the day was undoubtedly Aryan Tari vs Alireza Firouzja 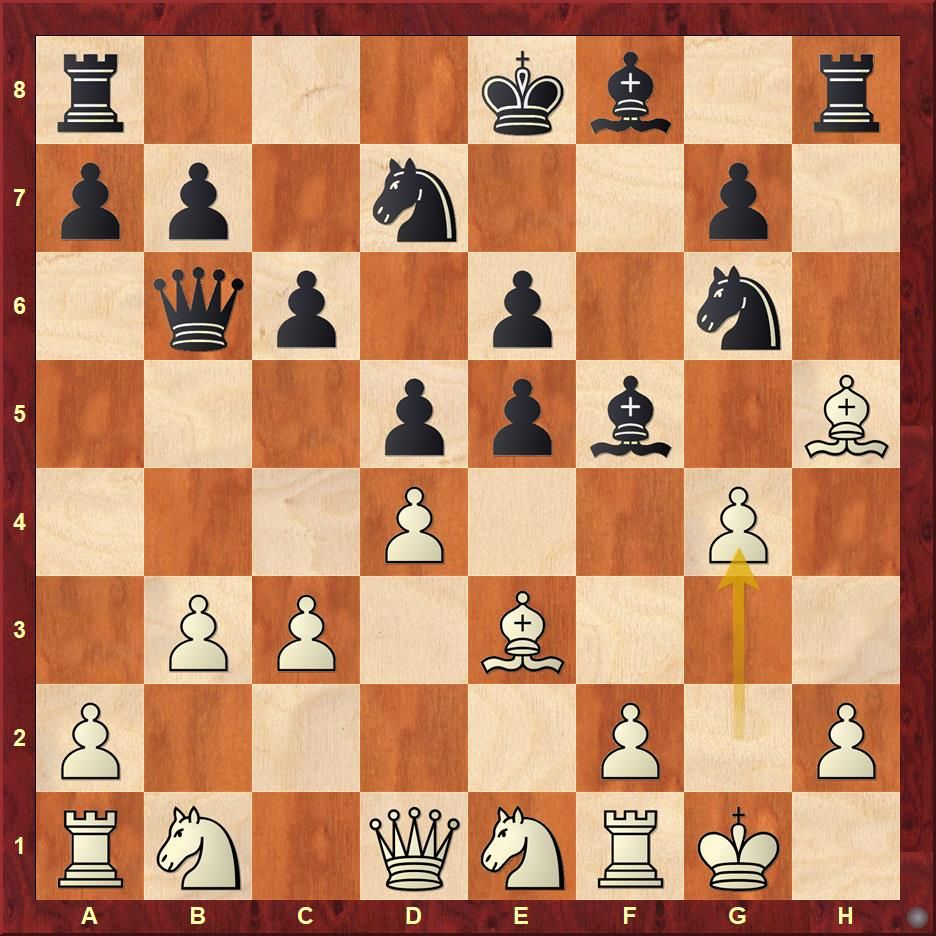 Is the bishop on f5 trapped? Not really! Firouzja sacrificed his rook on h5! 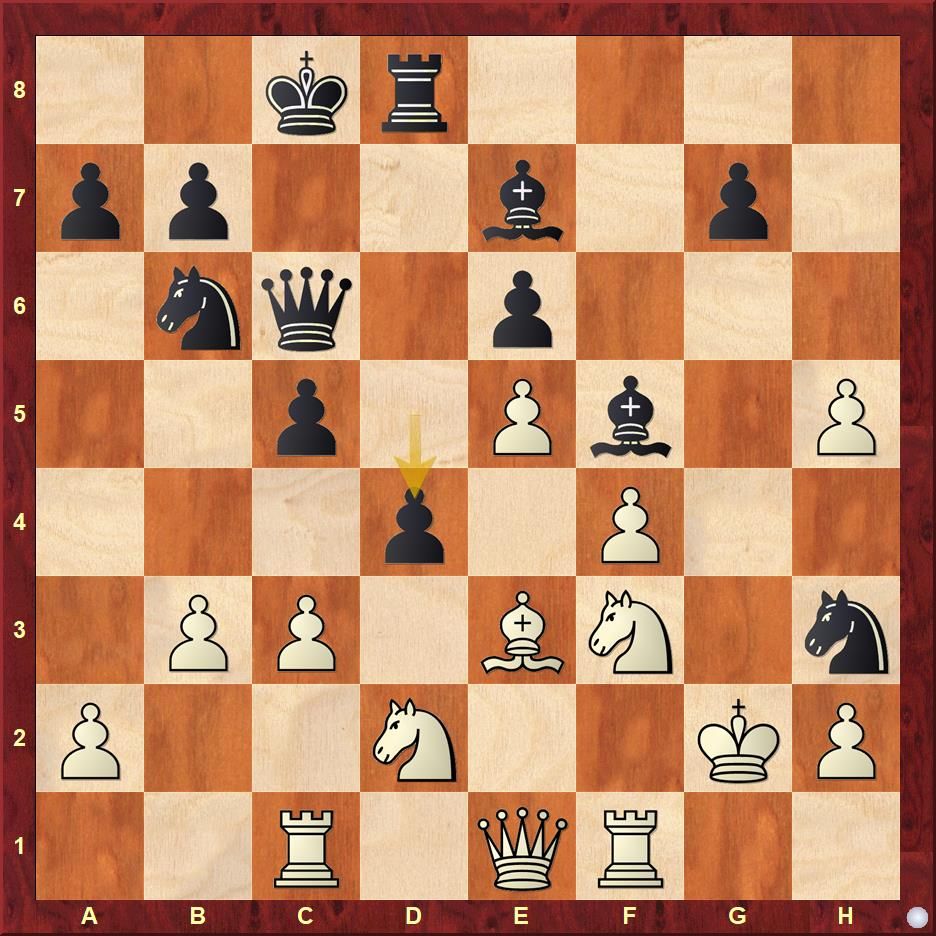 The move d5-d4 by Alireza was a classy one. It not only opened the black queen's route to the white queen but also freed up the d5 square for the knight.

The game was so wild that in a matter of couple of moves the evaluation was fluctuating from +5 to -5. In the end, when the position still had a lot of play left in it, the players agreed to a draw! Lack of time was the main reason why both the youngsters went for this decision. 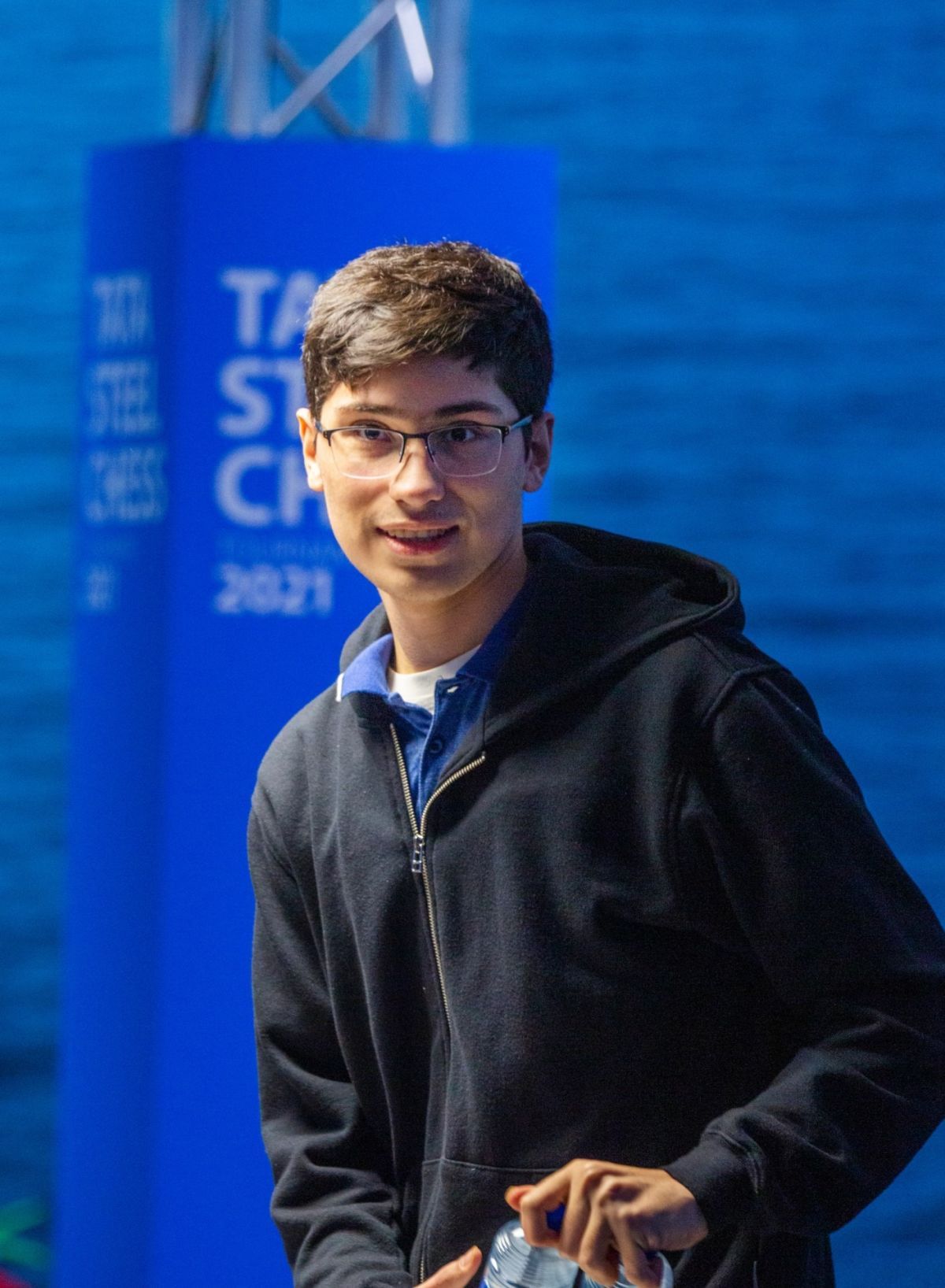 Firouzja played his exciting brand of chess, but was unable to score his second consecutive win.
Aryan Tari talks about the crazy game and why he agreed to a draw in the final position
Anish Giri played his favourite Grunfeld. And although he was a pawn down, he was never really in trouble. The margin of making a draw in such positions is quite huge! The players agreed to a draw in a rook endgame where Anish was still a pawn down, but Duda had no way to make progress.
Anish Giri never really felt any pressure throughout the game
Our trivia in the round 3 article was - who is this player? The answer was Anish Giri. Here's the new trivia: 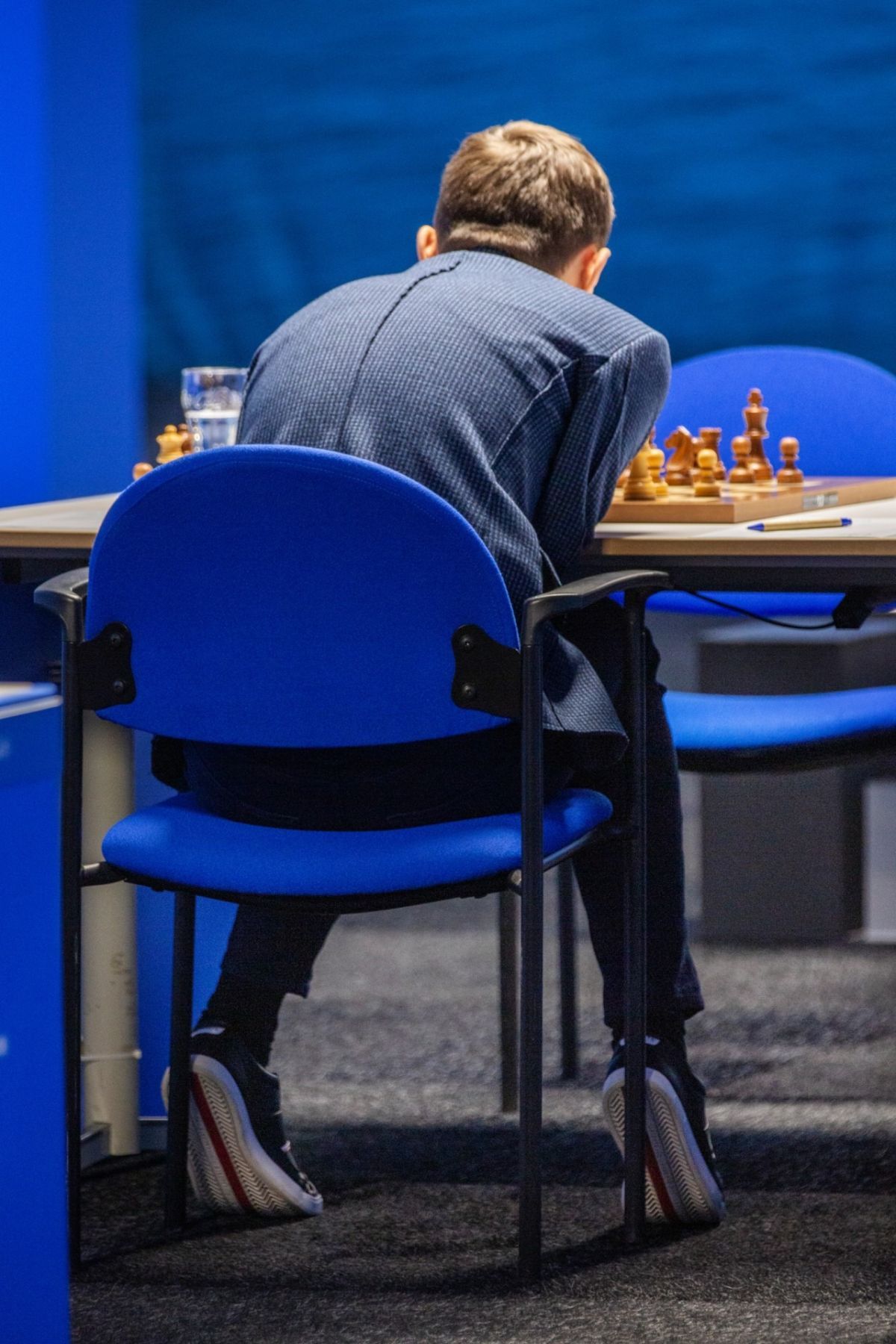 Who is he?
Results of round 4 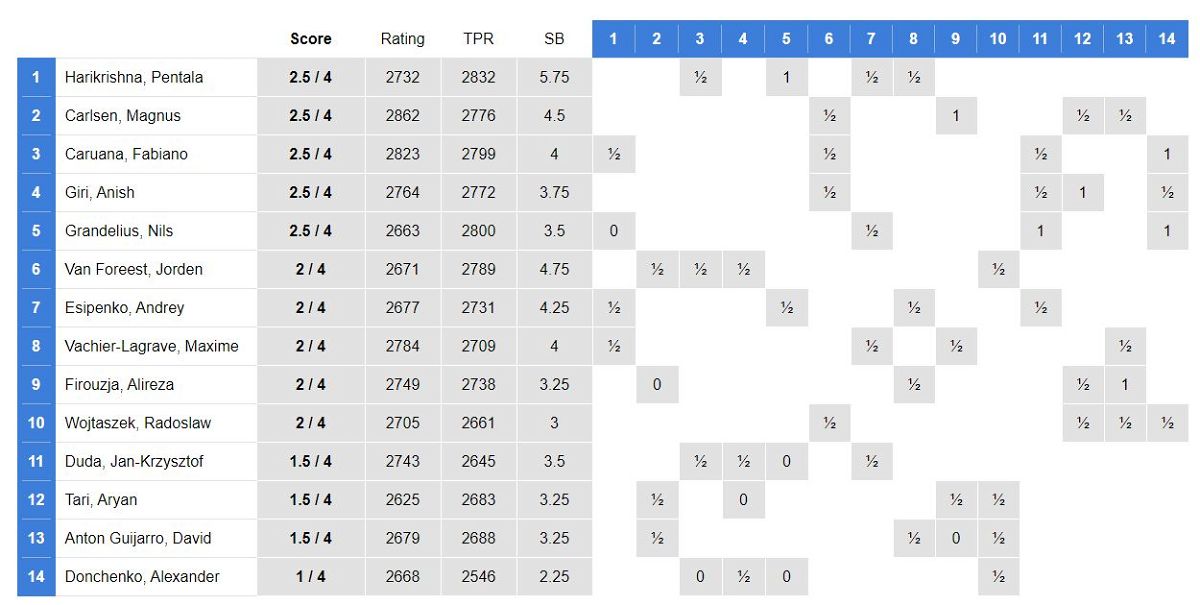 Standings after round 4 - in the lead are Harikrishna, Carlsen, Caruana, Giri and Grandelius
20th of January is a rest day. The pairing for round 5 on 21st of January is the above.
Check out IM Sagar Shah's commentary along with Amruta Mokal. Also joining in was India no.4 B. Adhiban.
Related news: