Aravindh Chithambaram is not going to give up the race for becoming the national champion so easily! The lad was in grave trouble against P. Shyam Nikhil, but managed to find some key defensive ideas to win his game and join Lalith Babu at the top of the table. The duo are now on 7.5/11 and have a full one point lead over the field. Lalith has a tiebreak edge because he has beaten Aravindh in their personal encounter, but on the other hand Aravindh has relatively easier opposition in the last two rounds than Lalith. It's going to be a fantastic battle to the finish. Round 11 report from Patna. 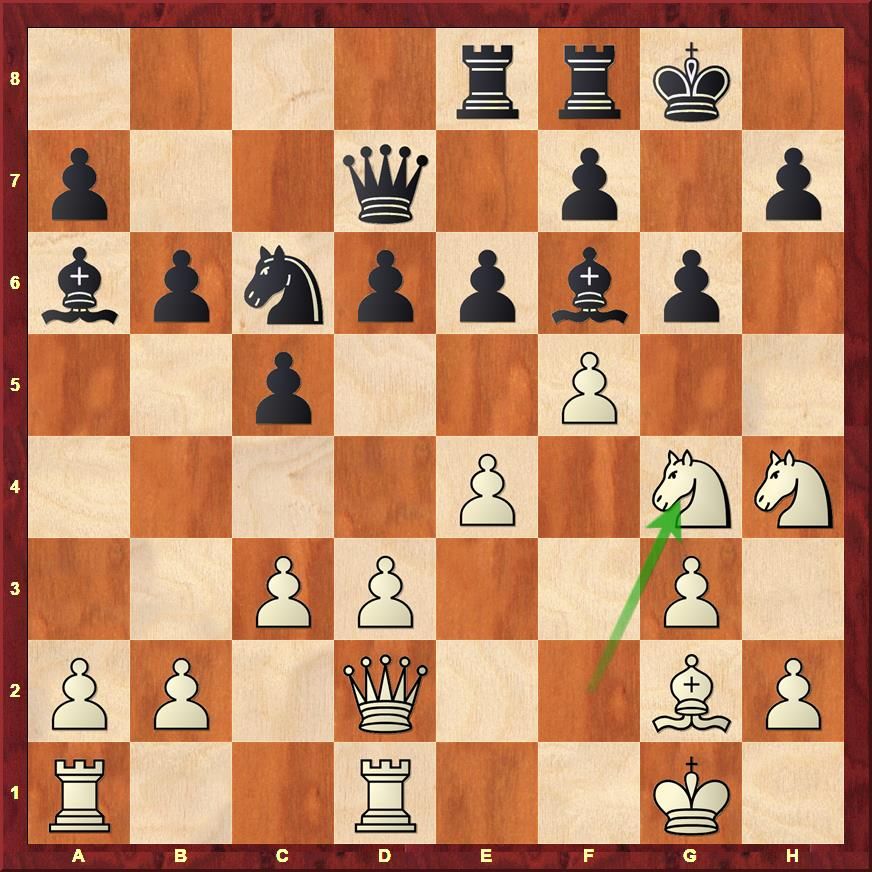 Shyam Nikhil moved his knight to g4. Aravindh thought for a while and chopped of the knight on h4. He was expecting his opponent to recapture with gxh4 when he was stunned by Shyam's response... 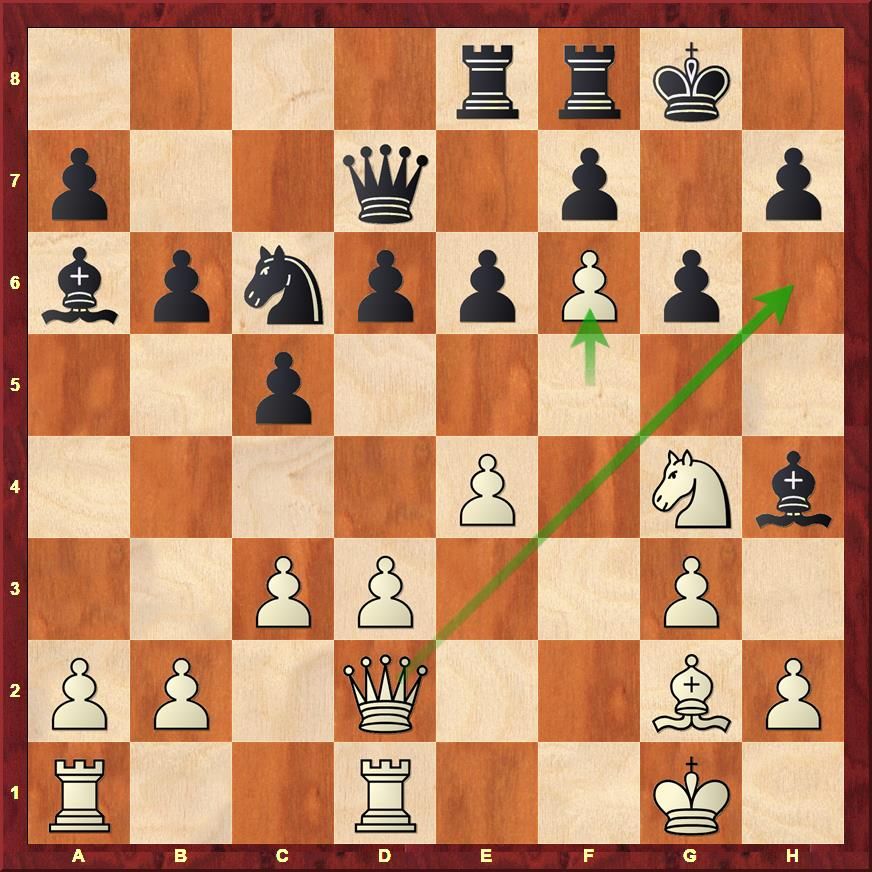 f6! was a strong move. The threat now is Qh6 and it would be a forced mate on the king. "I was really shocked to see this move", says Aravindh. "I felt really nervous, but showed that I was confident. I thank God that there was the move Kh8 followed by Rg8 with no white rook coming up to deliver the mate after a typical Qxh7+ sacrifice!" Aravindh's position was quite bad at that point as Shyam took back the piece and had control on the entire board.

However, the 18-year-old showed some great defensive skills. Shyam tried hard to break Aravindh's position, but it was not to be. Finally under grave time pressure he blundered, and Chithambaram took home the full point. With this he joined Lalith Babu in the lead. 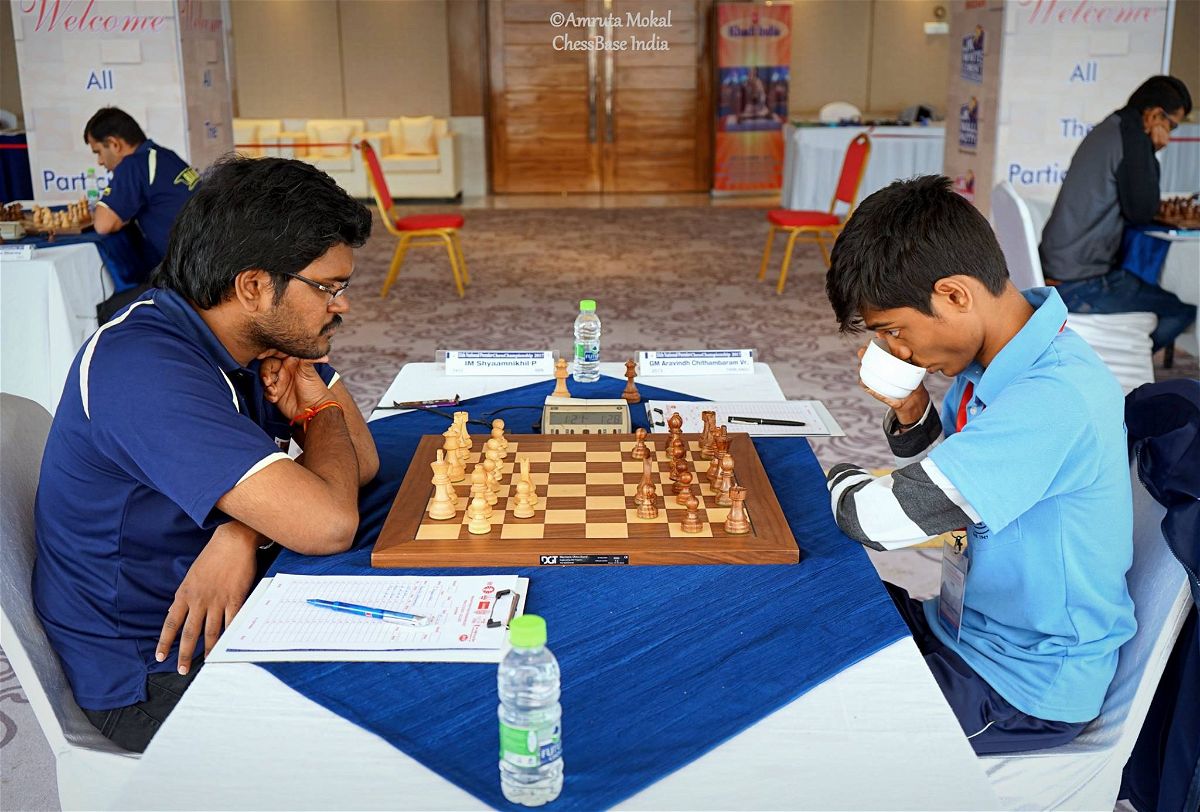 The tea was nice, but Aravindh's opening play was not! | Photo: Amruta Mokal

After the game I managed to get Aravindh on record on discuss his entire game. It's always a pleasure to see the thought process of such a big talent in such depth:

Mikhail Tal would have been proud of S.L. Narayanan. He sacrificed a bishop on e6 and it seemed as if he didn't have sufficient compensation. But he was able to prove it otherwise by making one strong move after another. Swapnil was on his toes and if it was for some lesser player, he would have surely got mated. The game finally ended in a draw, but it was one filled with great excitement and unusual motifs.

Swapnil and S.L. Narayanan speak about their game 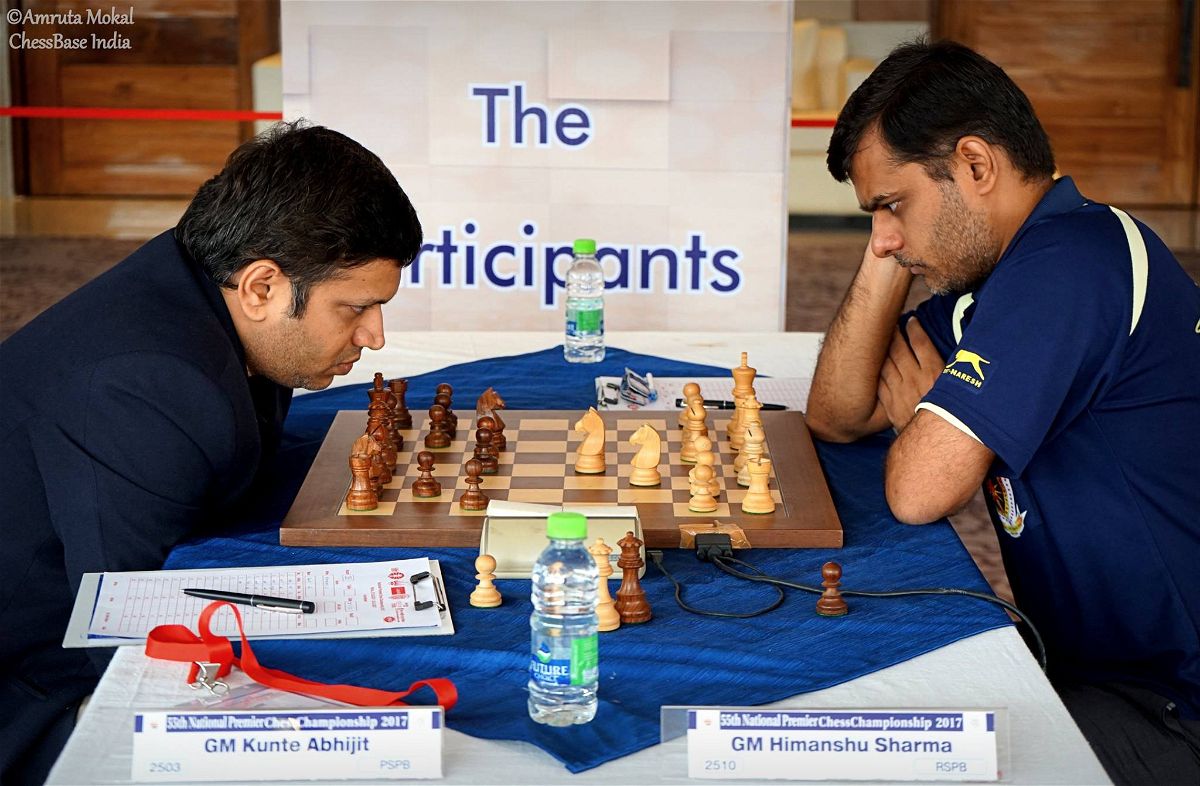 Abhijit Kunte ensured that Himanshu got no chance to recover as he handed him his seventh defeat at this event! | Photo: Amruta Mokal

Himanshu didn't play well from the white side of the Sicilian and Kunte got in all the crucial breaks and ideas in the game. It was a game that every Sicilian lover must look into.

Abhijit Kunte talks about his first win of the event 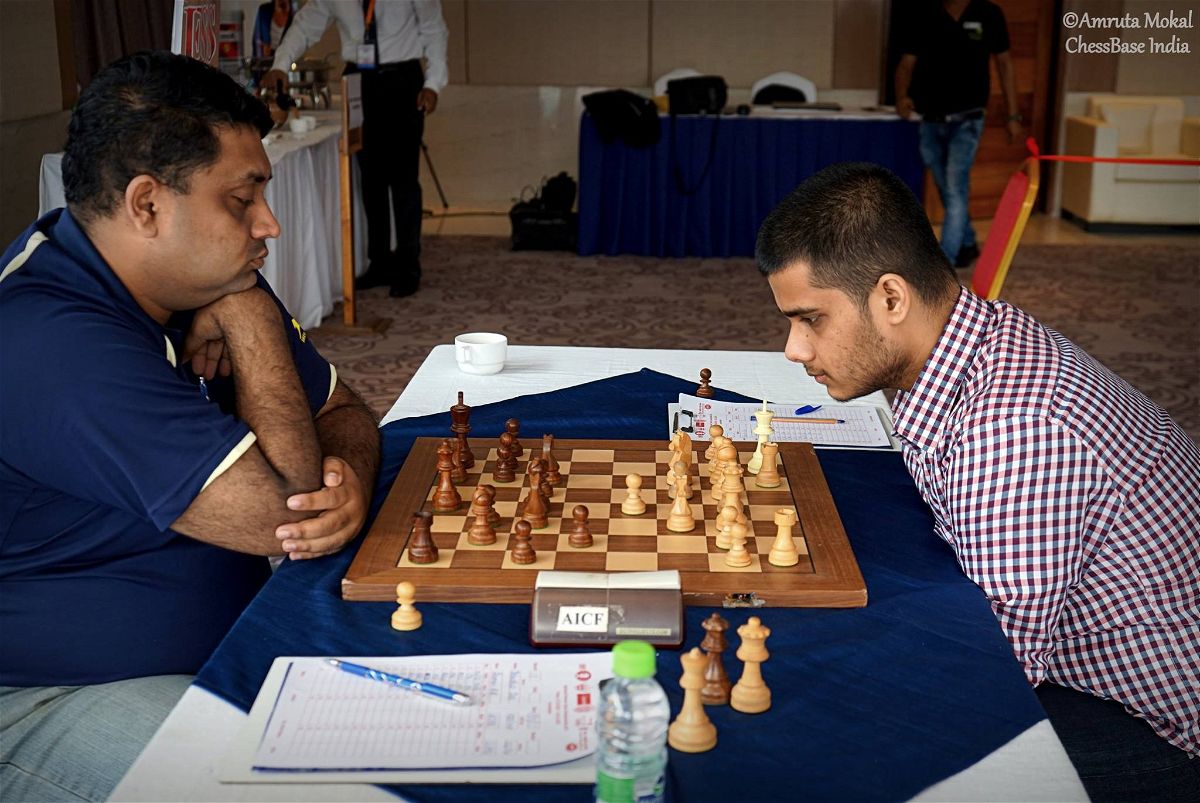 Debashis Das managed to beat Laxman after the latter overpressed in a round about equal position | Photo: Amruta Mokal 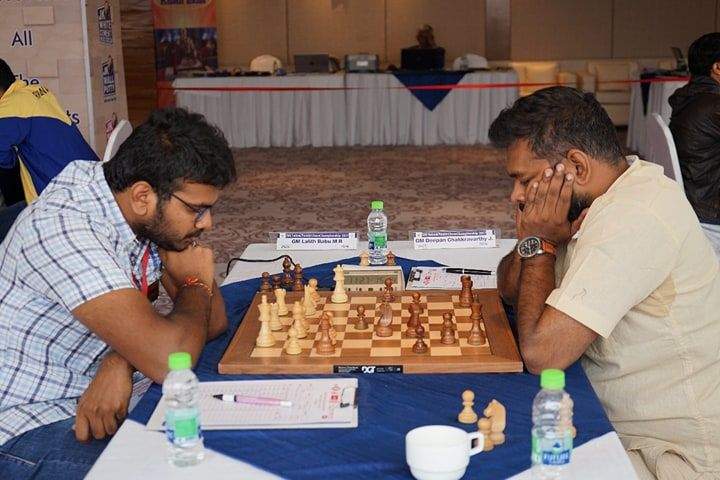 Lalith against Deepan was an entertaining encounter where Deepan got a tangible edge out of the opening but was unable to do much with it. Towards the end he had to play accurate to hold the draw | Photo: Amruta Mokal
This is how games are supposed to be - hard fought over the board and fun after it's over

With this draw Lalith and Aravindh have now 7.5/11. Lalith has an edge in terms of tiebreak. If they both end on the same score then Lalith would be the champion as he had beaten Aravindh in their direct encounter. However, Aravindh has much easier opponents in last two rounds than Lalith. While Lalith is up against Swapnil Dhopade and S.L.Narayanan, Aravindh will face an out of sorts Himanshu and Debashis Das in the last two rounds. It's really going to be a very interesting fight to the finish. 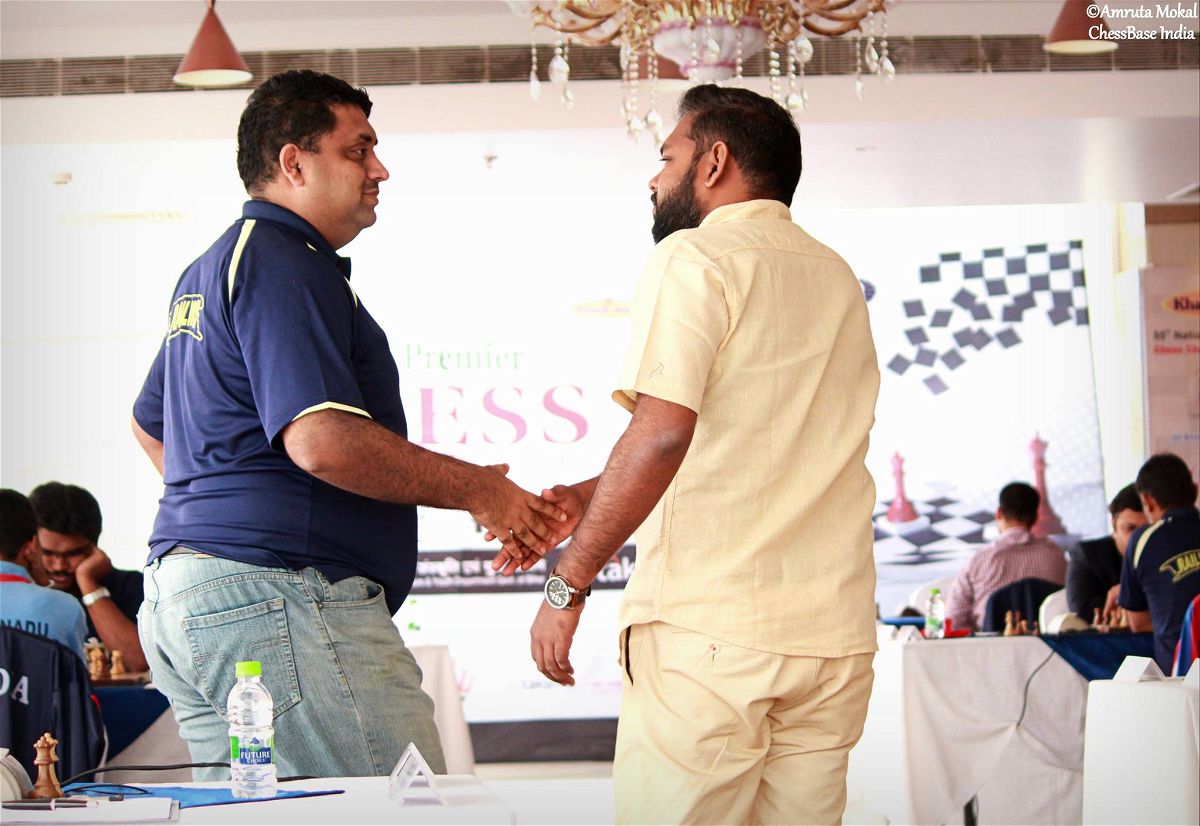 Very rarely do you see players wishing each other after the games have begun. Deepan shaking hands with Laxman | Photo: Amruta Mokal 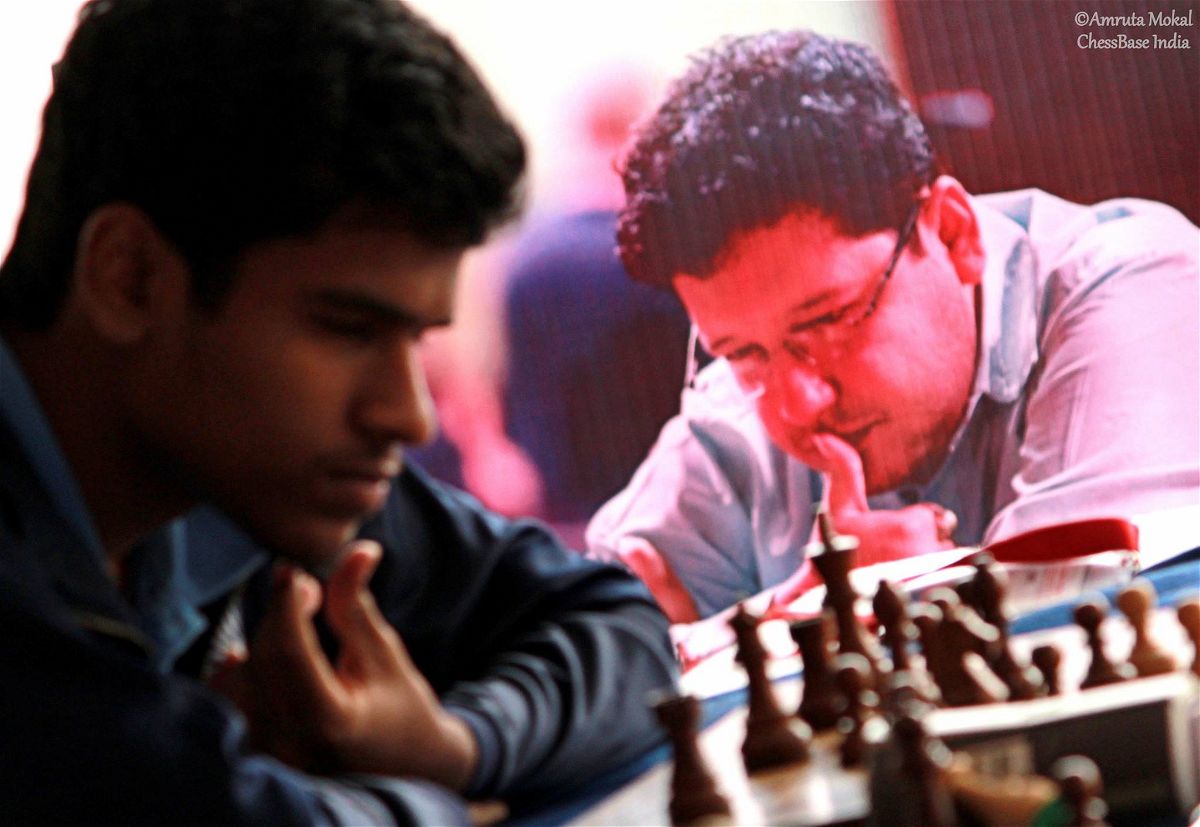 It's not easy when you have your opponent as well as his poster staring at you! | Photo: Amruta Mokal 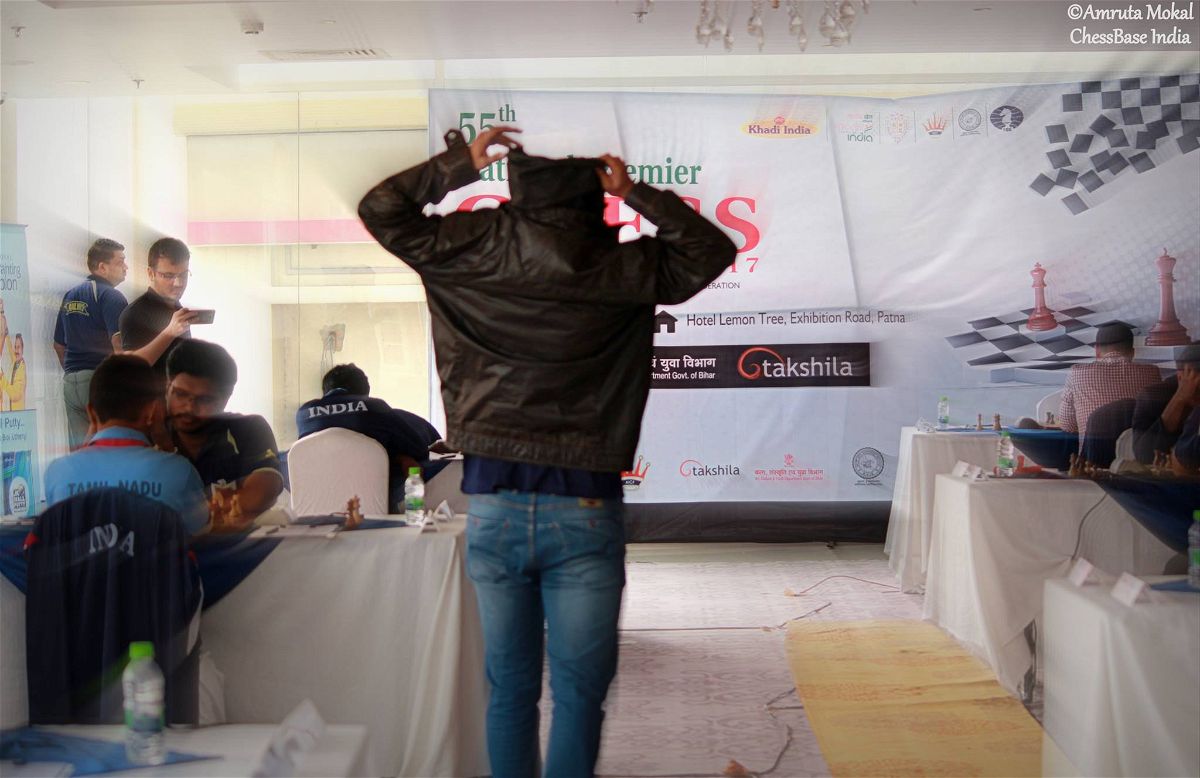 Who is he? Any guesses? | Photo: Amruta Mokal 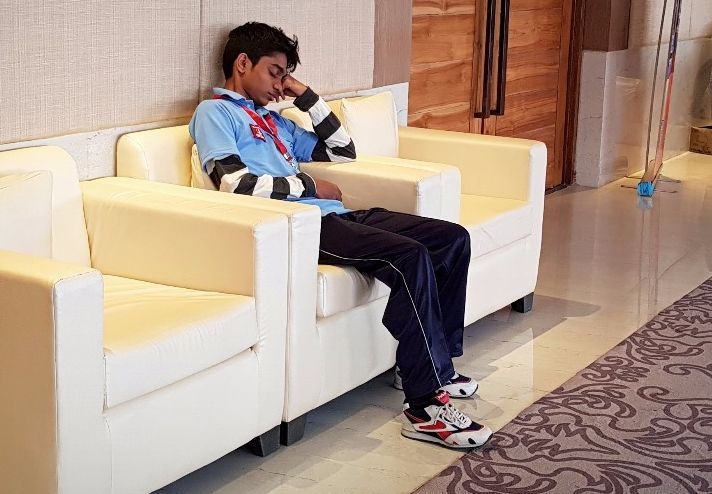 For Aravindh this tournament is quite easy! He even takes power naps in between his games! | Photo: Amruta Mokal 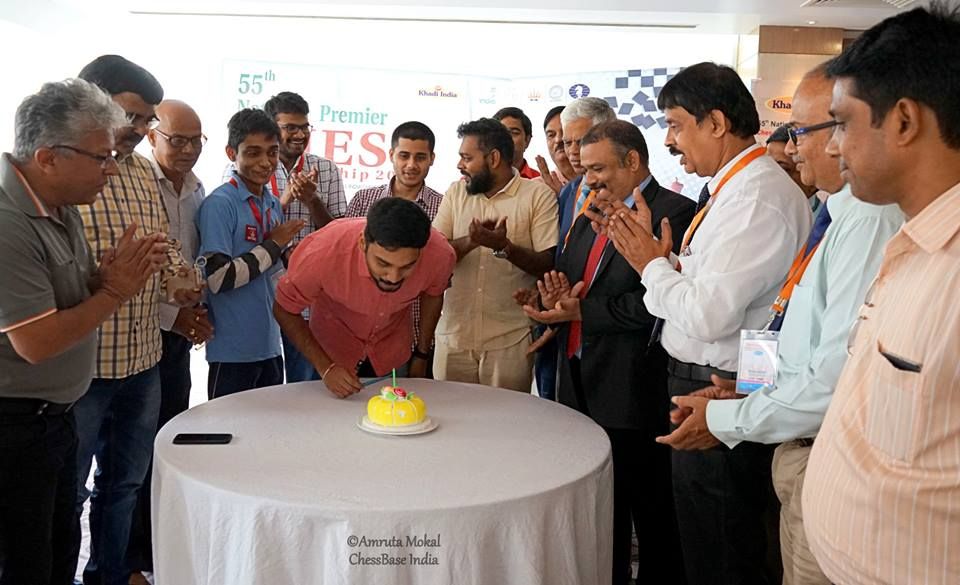 S. Nitin celebrated his 25th birthday as the organizers arranged for a cake! | Photo: Amruta Mokal
Enjoying birthday celebrations
Dharmendra Kumar is one of those rare people in Indian chess who has made a living out of being an arbiter. We speak to him about his life as an arbiter and his advice to budding young talents!

Replay all the games of round 11 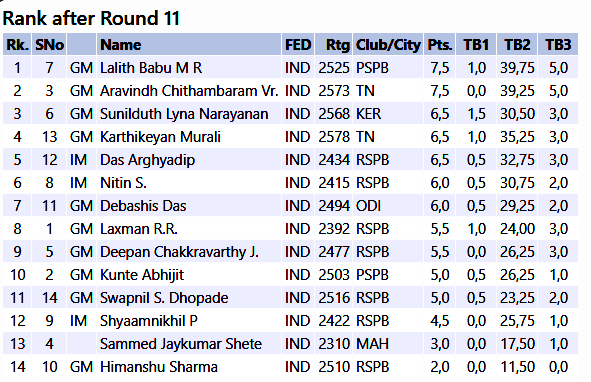 Lalith and Aravindh are now in joint lead

Lalith against S.L. Narayanan and Aravindh vs Himanshu are the games to look forward to