Lalith Babu has never won the National Premier before. He is currently ideally placed to do that. With just three rounds to go, he has a half point lead over the field. In the tenth round he beat Sammed Shete with the black pieces. Lalith has three strong opponents left to play - Deepan, Swapnil and Narayanan. But as the article will convince you, self confidence is not something that Lalith lacks! The other decisive game of the round was between R.R. Laxman and Himanshu Sharma. The Haryana GM is unable stop the bleeding and slumped to his sixth defeat of the event. We have comprehensive coverage from Patna.

The year was 2008. I was playing at the National Juniors (under-19) at Tadepalligudem in Andhra Pradesh. A lot of top juniors of our country were taking part at the event, including Adhiban, Sethuraman, Vishnu Prasanna, Ashwin Jayaram and many others, but there was one boy who was refusing to let go off the top board. He was none other than Lalith Babu. Lalith was rated somewhere around 2300 much lower than the other "stars" but if you measured the chess playing skills, he was right up there. Within a year he had reached a rating of 2472. Now, Lalith becoming the National Junior Champion was a great achievement. But what was even more heartening, was to see the way he did it. The Moscow Variation in the Slav was quite in vogue at that time. Lalith was 1.d4 player and it seemed as if everyone wanted to down him in that variation. First came Vishnu Prasanna in the fifth round and Lalith managed to beat him. Then it was Adhiban in round seven and Lalith beat him as well. I was already quite impressed. When Debashis Das repeated this line in the eleventh round I started to ask myself why is Lalith playing this line again and again? Isn't he afraid that his opponent would come prepared with some big novelty and defeat him without a fight.

Lalith proved me wrong, beat Debashis Das and became the National Champion. I had got a model lesson in self confidence. Here was a man (15-year-old boy to be precise!) who was telling his opponents: "I have done my homework in this line. Try your best to crack it. I believe my superior understanding will prevail!" And that's what happened. Lalith became the champion with a score of 9.0/11. And everyone realized that he was one of the biggest upcoming talents of our country. 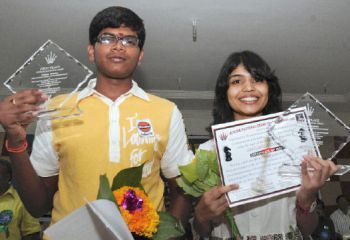 I have always wondered why Lalith has not been able to make that leap towards 2600 and beyond in spite of reaching a rating of 2583 as early as 2013. As Lalith clarified in one of the videos taken a few days ago, that he put too much pressure on himself. Nearly our years have passed and Lalith has lost a considerable amount of Elo points. He is now down to 2525. But one thing that he has gained is experience. With the experience of innumerable failures, the lad seems much more calm and composed. He is leading the National Premier 2017 with a score of 7.0/10, half a point ahead of Aravindh Chithambaram. With three rounds to go Lalith is in the best position to stake his claim on the title. But it's not going to be easy. He has three strong opponents left - Deepan Chakkravarthy, S.L. Narayanan and Swapnil Dhopade. 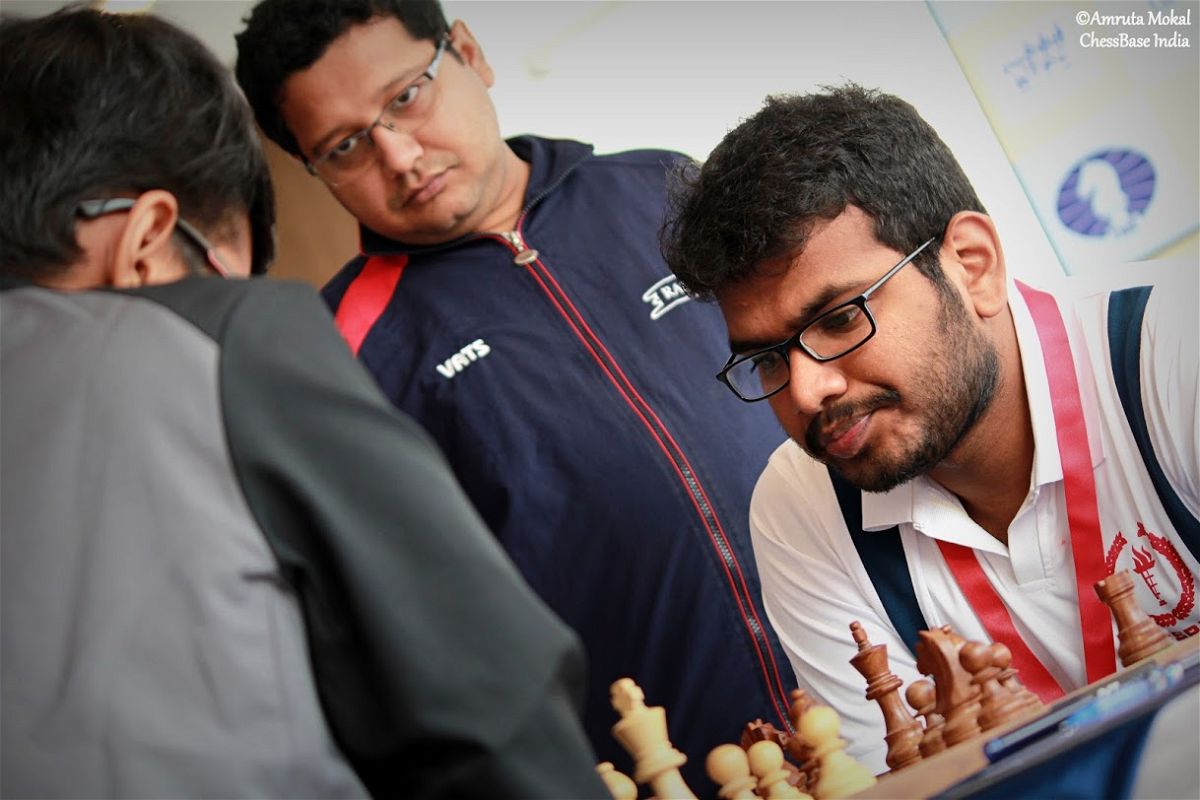 Sammed facing the strong moves of Lalith and the strong stare of Arghyadip! | Photo : Amruta Mokal

Lalith repeated the same line that was played by Swapnil against Sammed at this National Premier. It seemed as if the boy from Kolhapur had done his homework and put quite a bit of pressure on Lalith. However, Lalith played in a very resourceful manner and in spite of having less space managed to wriggle out from all the problems and bring home the full point. 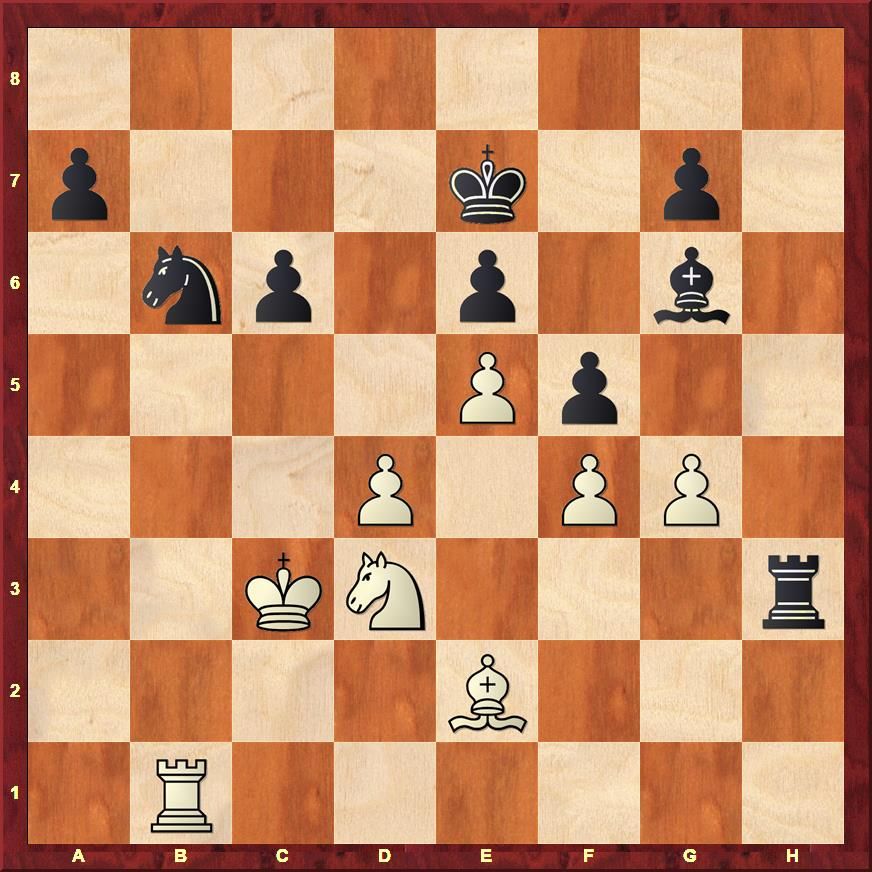 The critical mistake by Sammed took place in this position where he took gxf5 as White. Instead g5 would have given him better drawing chances. After gxf5 Bxf5, the bishop on f5 became very powerful
Lalith speaks about his win over Sammed and his favourite opening Caro Kann!

If you too would like to play Lalith's favourite opening - the Caro Kann defence, there is nothing better than Vidit's DVDs on this opening that he has recorded for ChessBase: 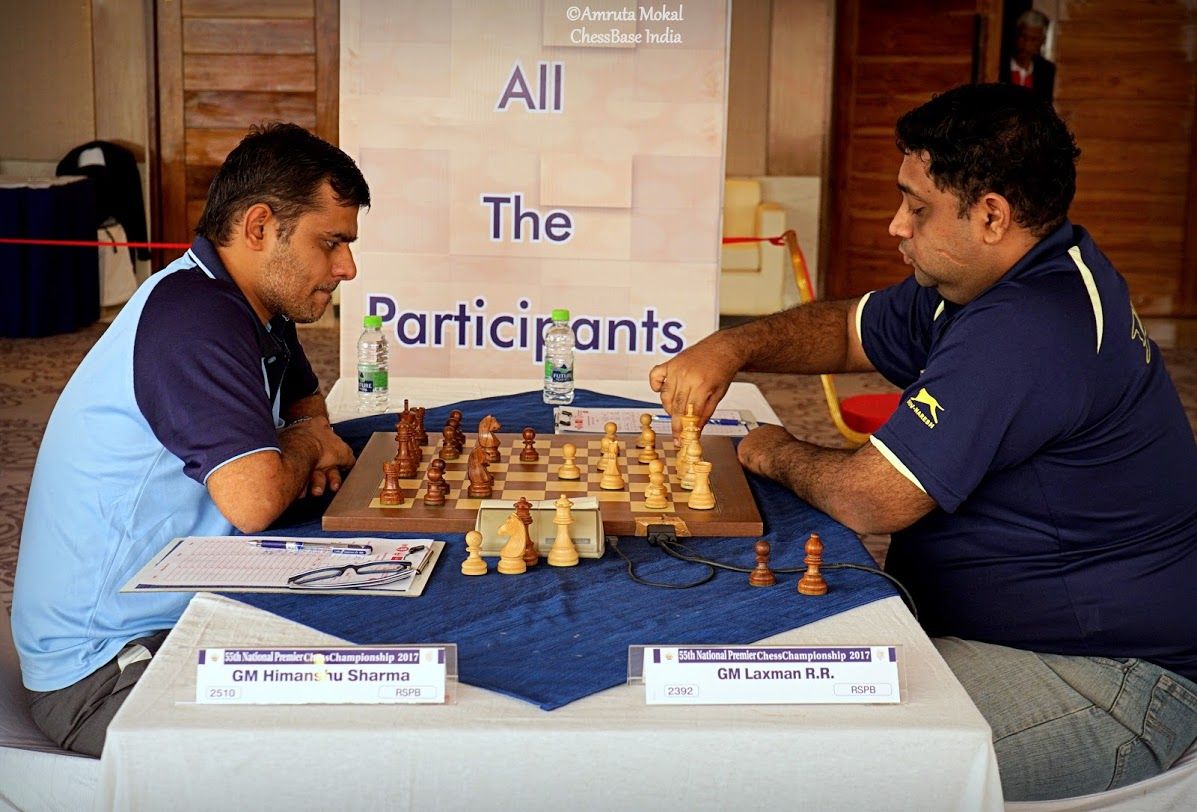 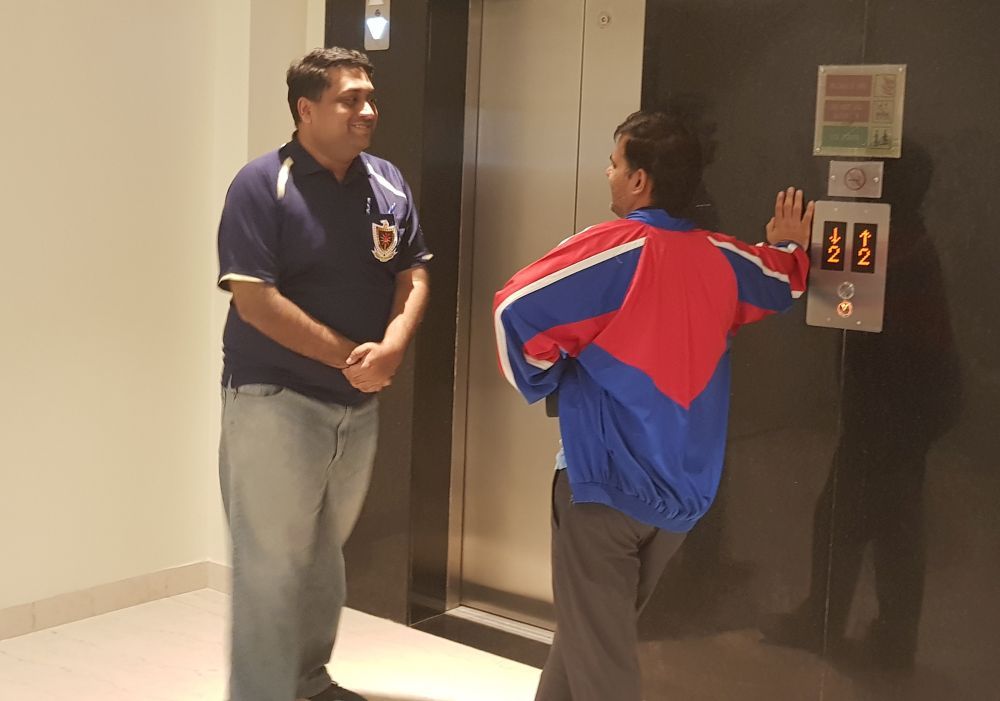 But look at the sportsman spirit after the game! Both the players standing outside the elevator and Himanshu discussing the game and his errors! That's the stuff champions are made up of. | Photo : Sagar Shah 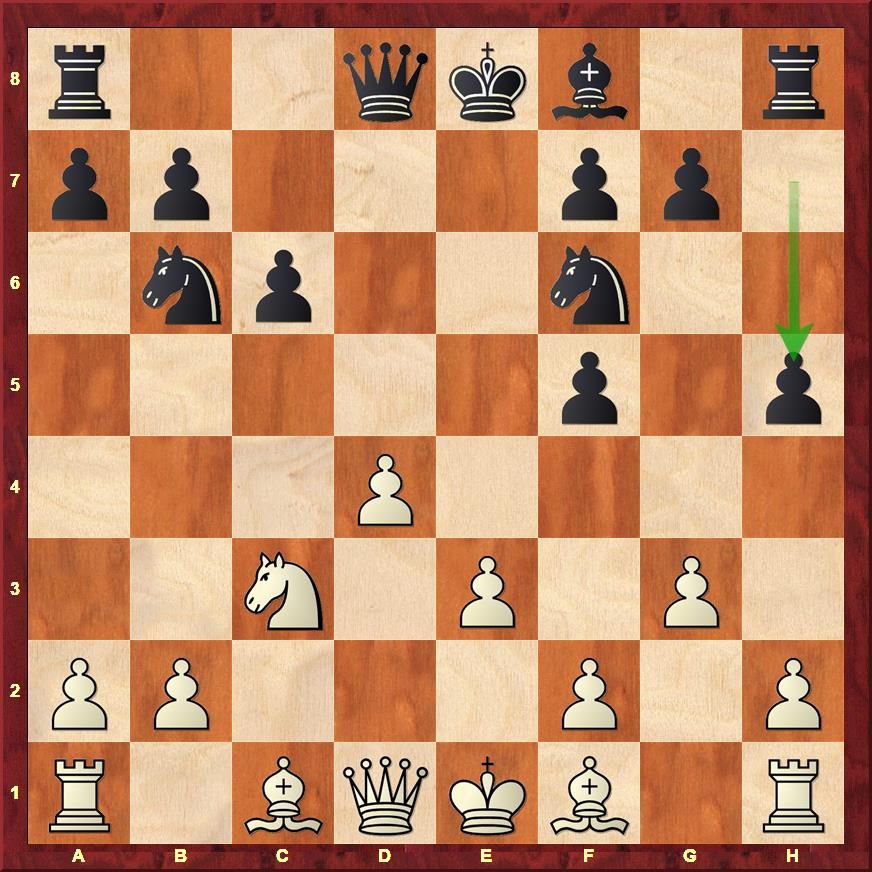 Himanshu's 10...h5 looked quite aggressive, but it was all prepared by Laxman who had seen the game of GM Zviad Izoria from the White side of the opening 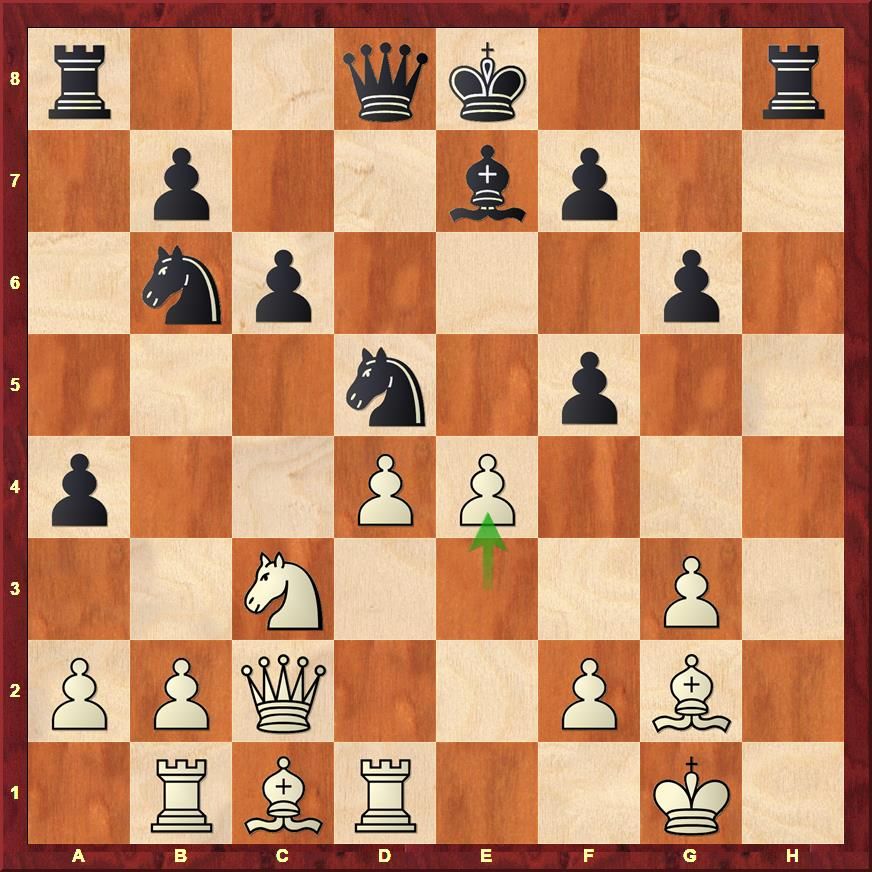 Although the h-file was open, Laxman's e4 break pin pointed on the fact that even the black king had something to worry about!
"I threw all caution to the winds today" - Laxman! 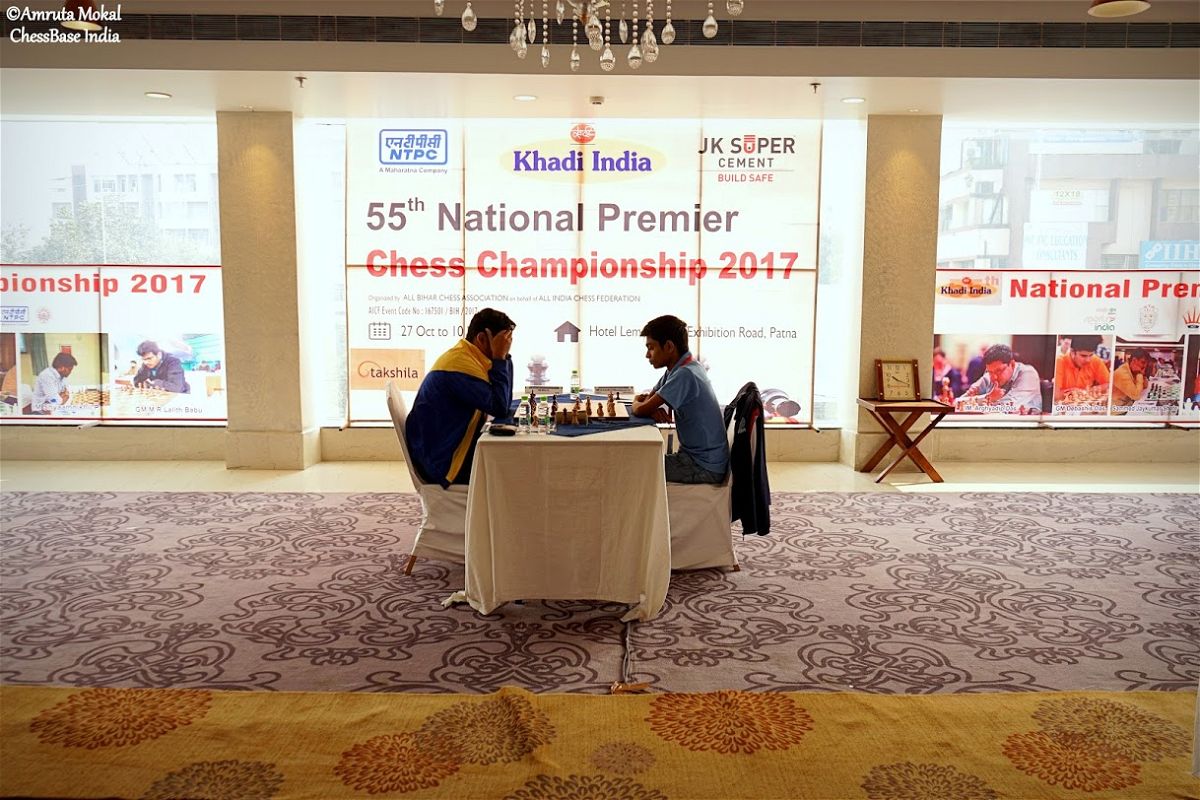 Another interesting game of the day was Aravindh Chithambaram against S. Nitin | Photo : Amruta Mokal 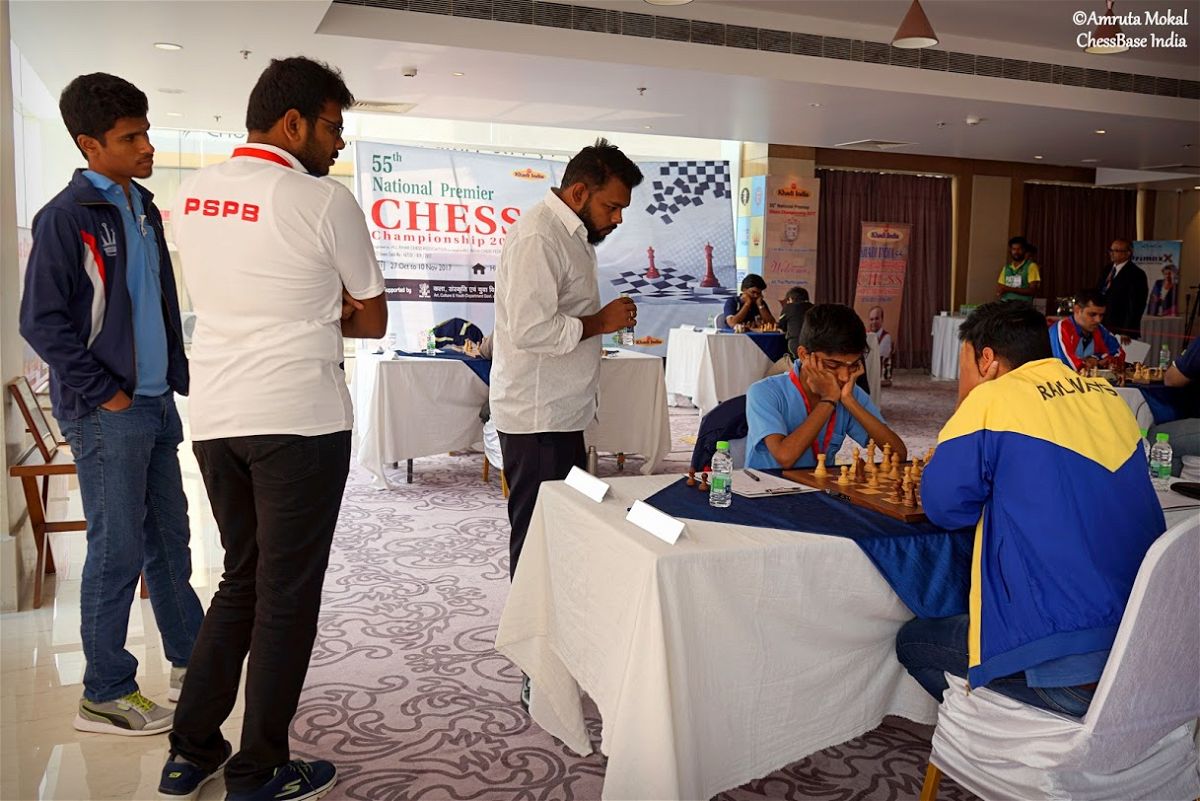 Nitin was well prepared in the opening. Suddenly Aravindh unleased a move that he had not seen before: | Photo : Amruta Mokal 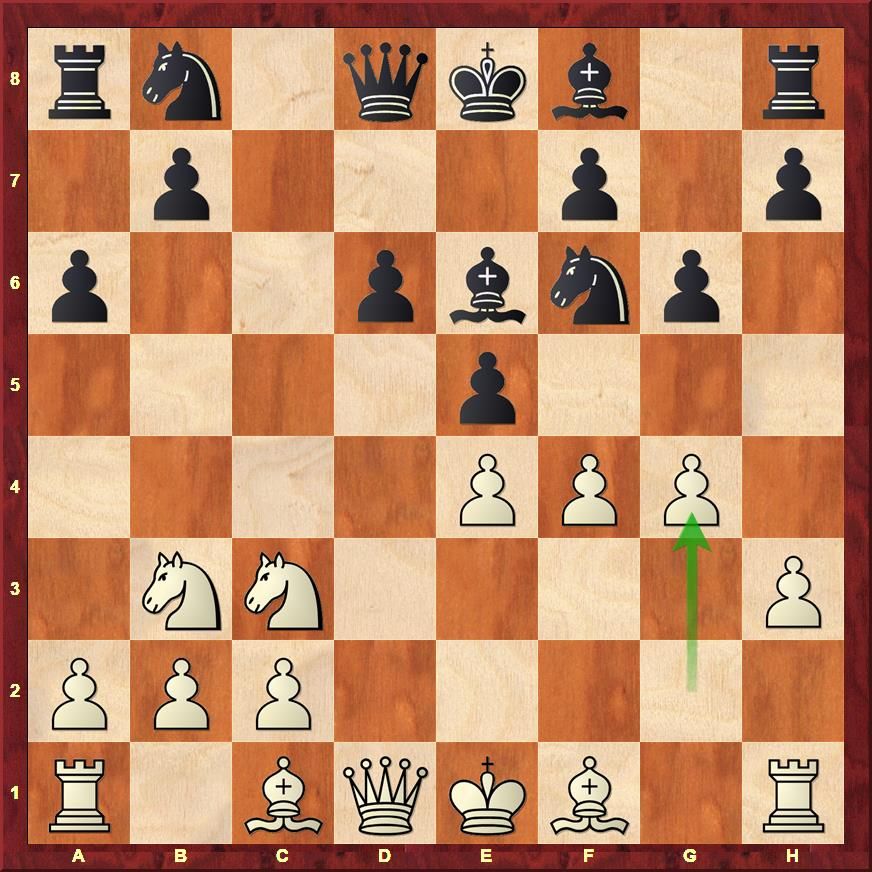 The move g4 came as a surprise to Nitin 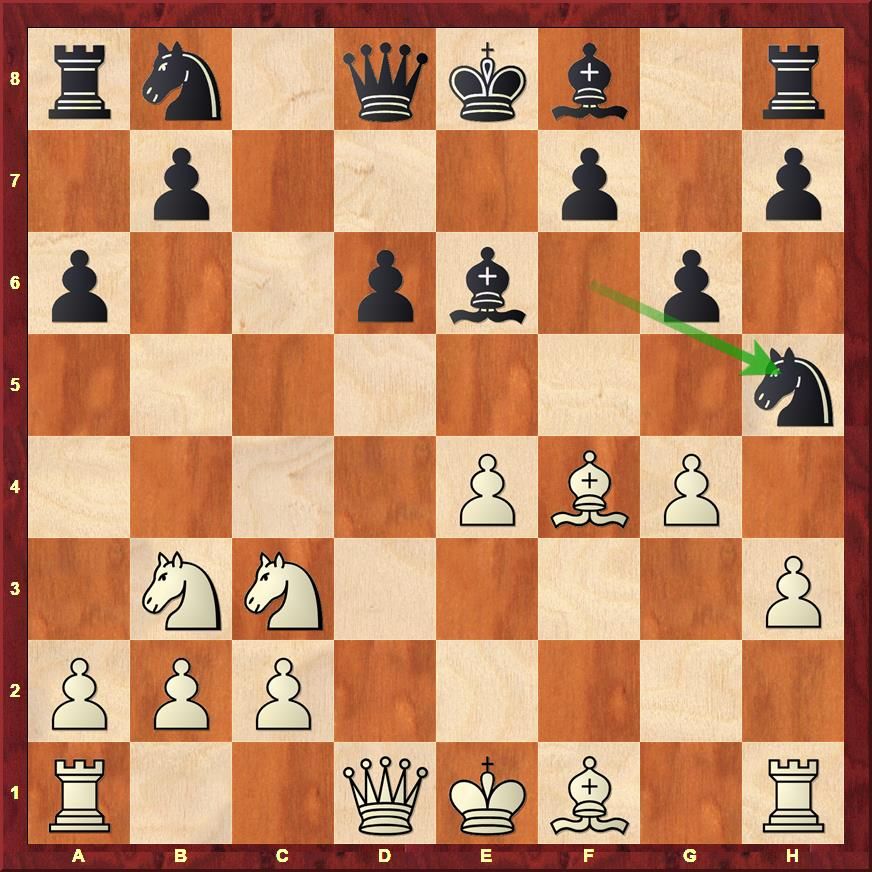 ...Nh5! was a very strong move. The knight cannot be taken because of Qh4+ and the knight is making its way to g3 where it would capture the f1 bishop at the very least. 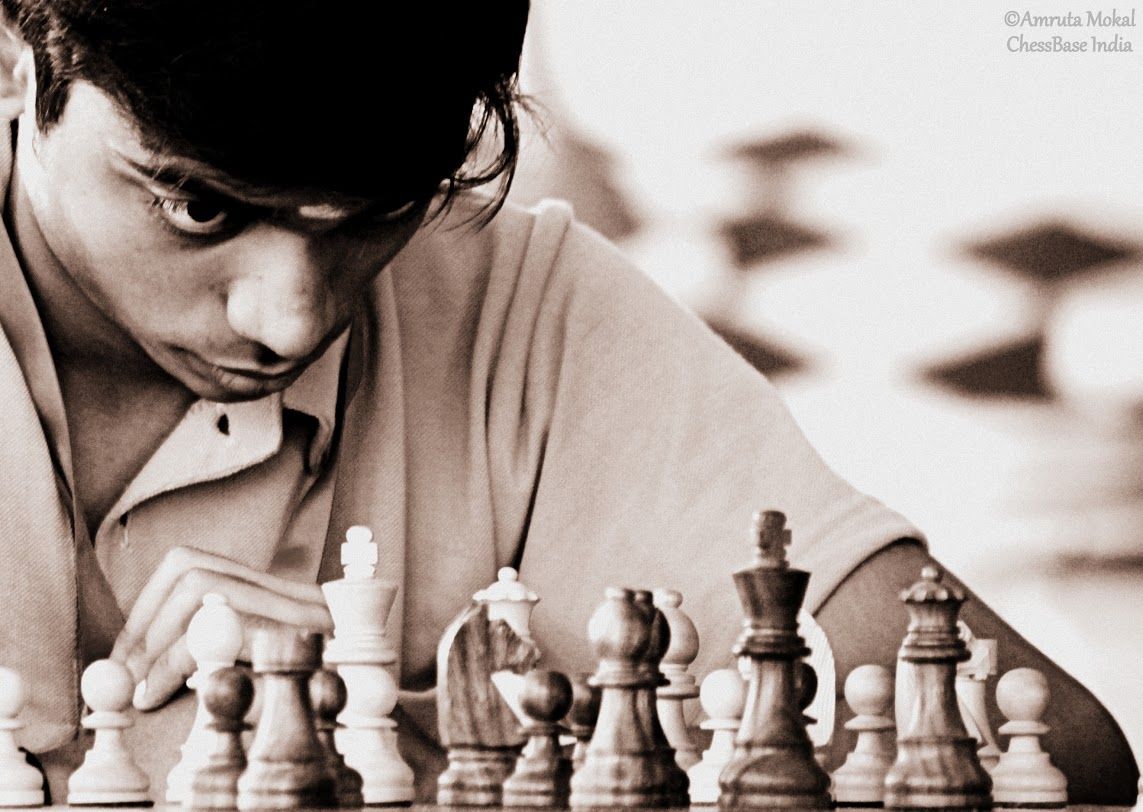 Not the best use of his white pieces, but Aravindh is still in the hunt for the title with 6.5/10. He is in the sole second position. | Photo : Amruta Mokal 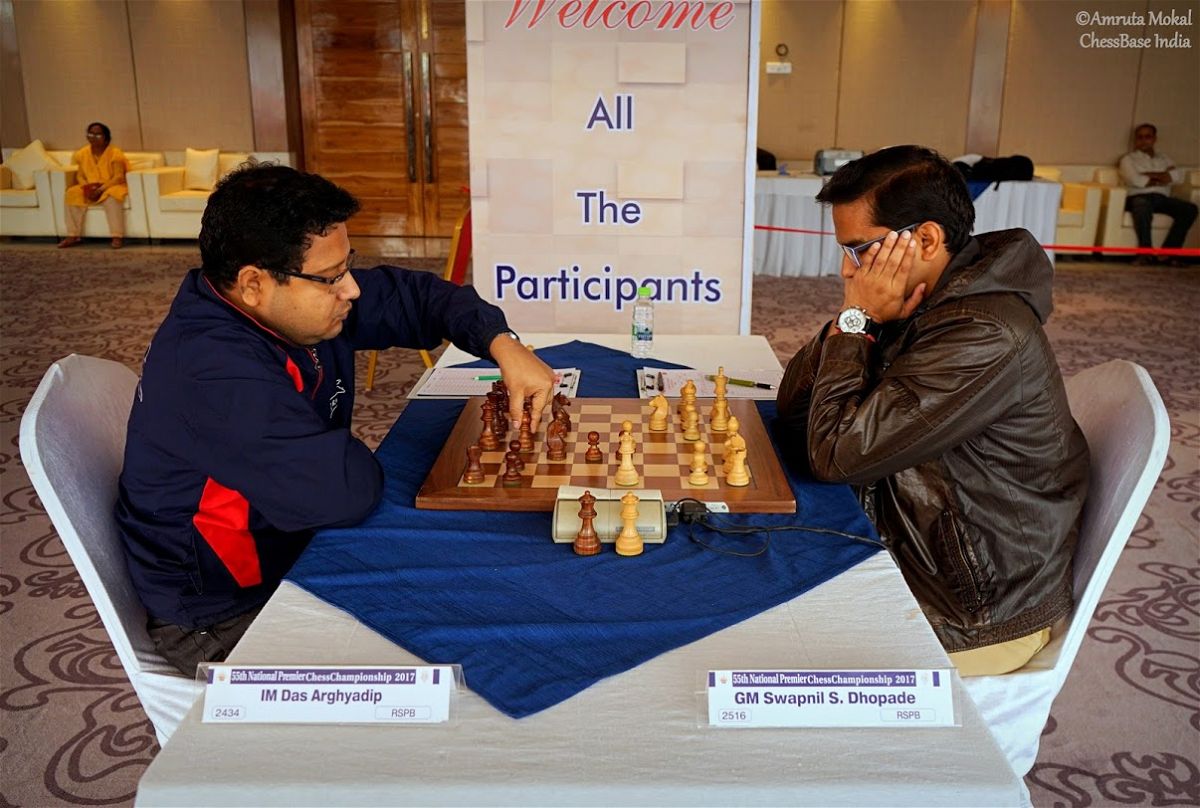 Arghyadip Das' preparation in this tournament has been exemplary. He easily held Swapnil to a draw with the black pieces | Photo : Amruta Mokal

I predict that this duo will break into 2700 in the next couple of years! | Photo : Sagar Shah

Replay all the games of round 10 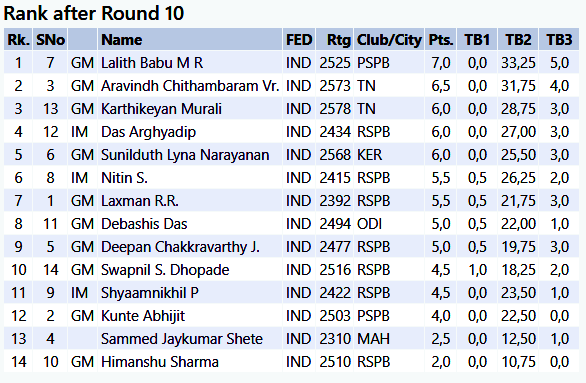 Lalith is now the sole leader!