Just before the ninth round began we received messages like: This tournament is meant to be Aravindh's, the youngster from Chennai is on fire, sublime play by the 18-year-old and so on. With one point lead and five rounds to go Aravindh was in the driver's seat. But Lalith Babu had some different intentions. He came to the game with great confidence and managed to show some very balanced play to outplay Chithambaram. With this victory the tournament is wide open once again. Aravindh and Lalith lead the event with 6.0/9. Right on their heels are Karthikeyan Murali, Arghyadip Das and S.L. Narayanan who are on 5.5/9. A detailed account of all the happenings from Patna.

"Having nothing to lose" is a good attitude to play chess with. When you having nothing to lose, you do not take much pressure and when you don't have the pressure, you are able to bring out the best chess within you. " The last time I won a tournament was 3-4 years ago. I am not looking to win this event," says GM Lalith Babu who was the hero of the ninth round of the Khadi India National Premier 2017. 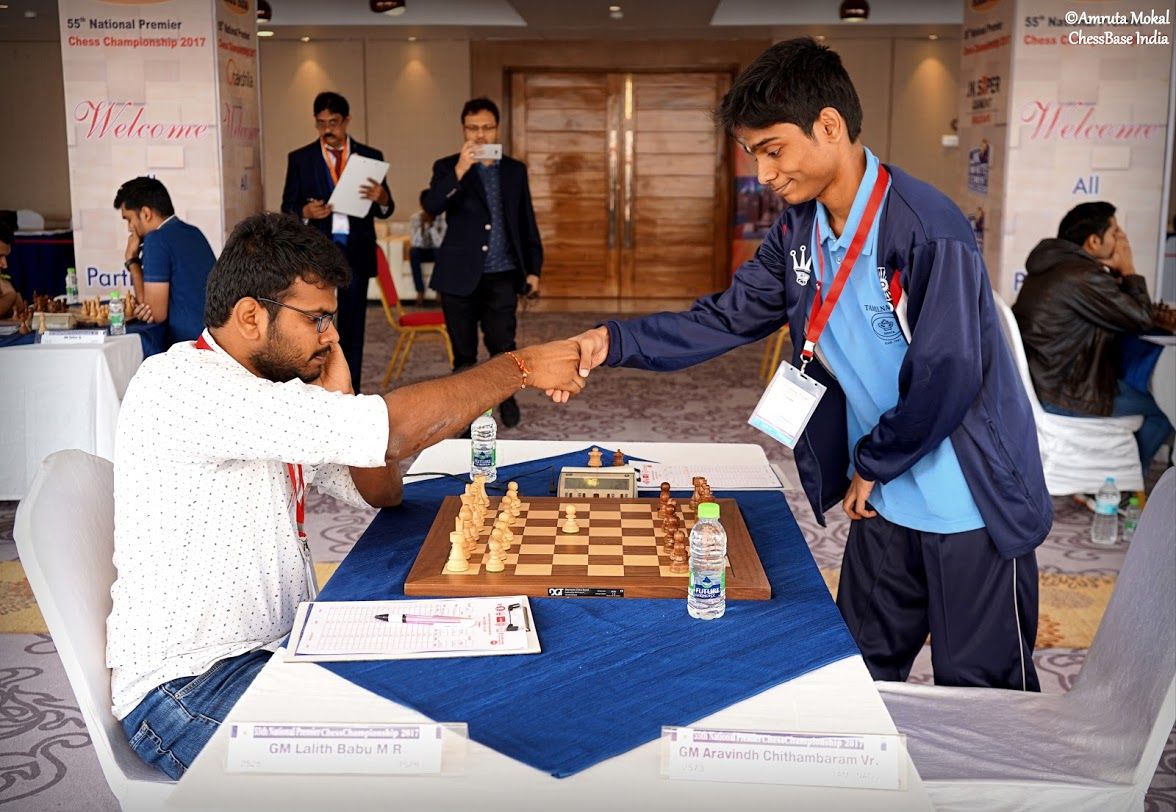 Aravindh Chithambaram who had a one point lead over the field after eight rounds was stopped by Lalith Babu in the ninth | Photo: Amruta Mokal
Aravindh always comes late to the game!

Aravind looked unbeatable in the tournament and many experts felt that he was playing the tournament of his life. But the tame fashion in which he lost on Monday showed that he still has to work quite a bit on his consistency in the game. 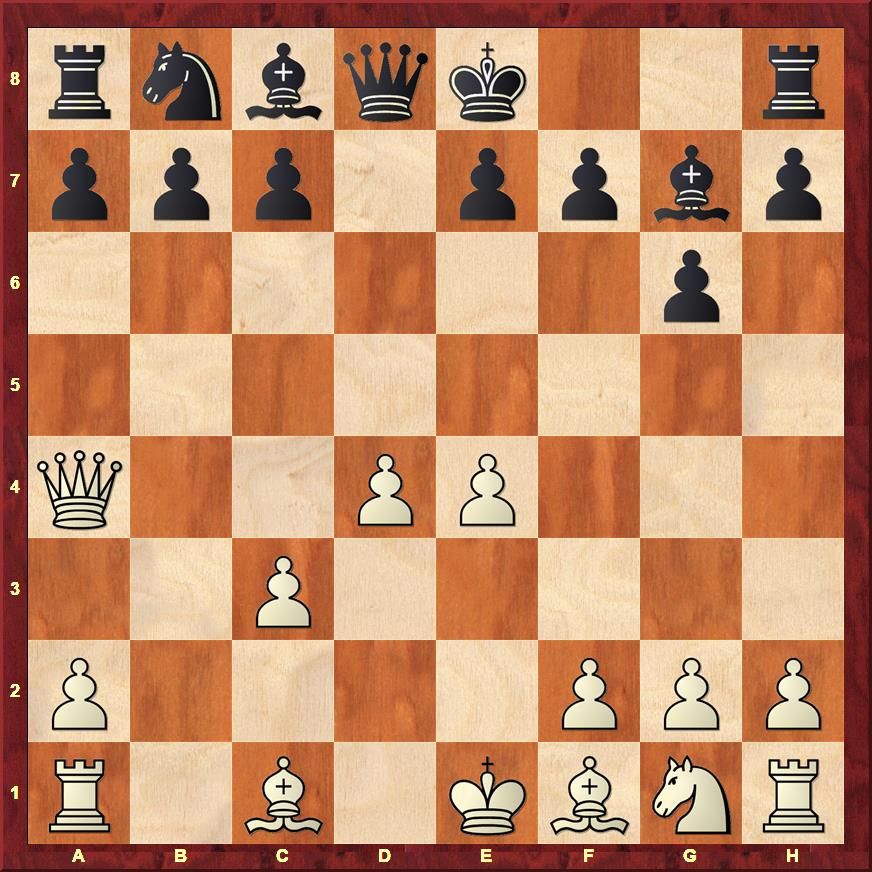 Aravindh played the Grunfeld for the first time in his life. 7.Qa4+ was a surprise to him and he responded quite well. 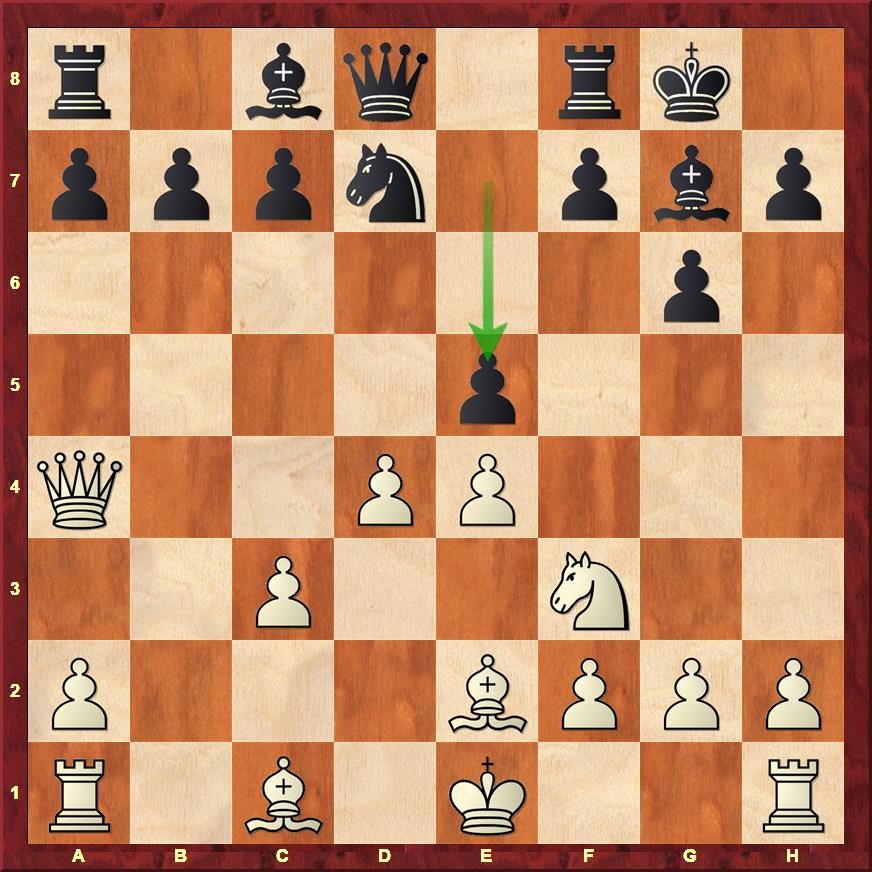 Usually Black goes c5 in these structures but Aravindh has his own ideas. He played e5 and it was quite interesting. 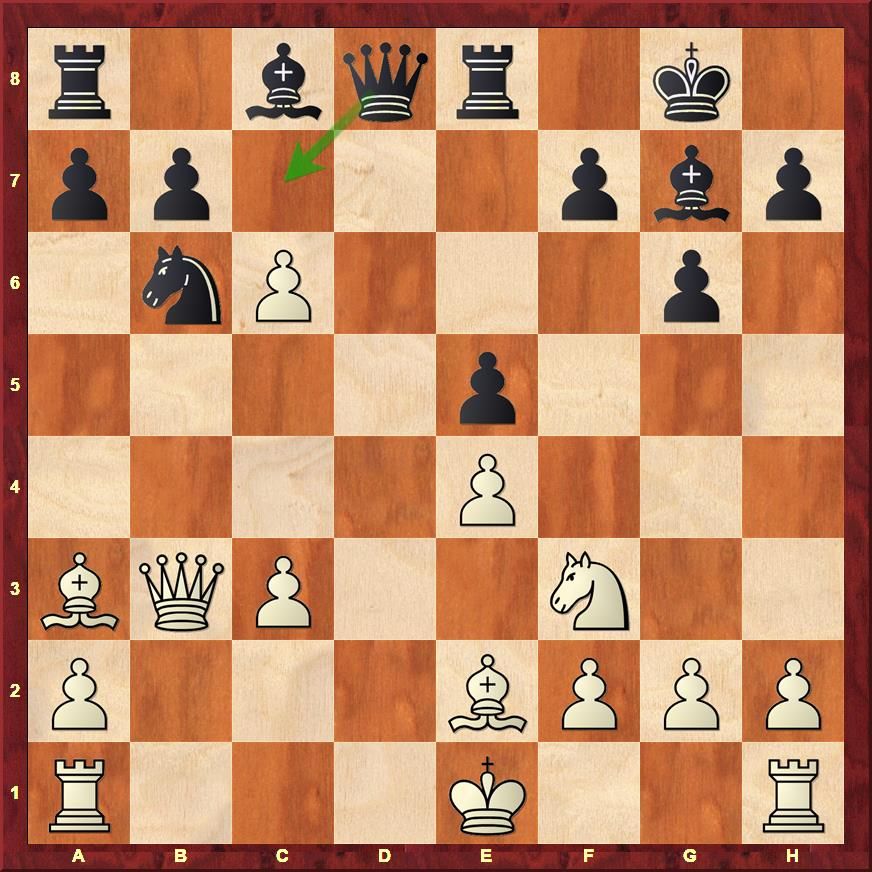 dxc6 played by Lalith should have been answered by ...Qc7 instead of ...Be6 as was played by Aravindh. 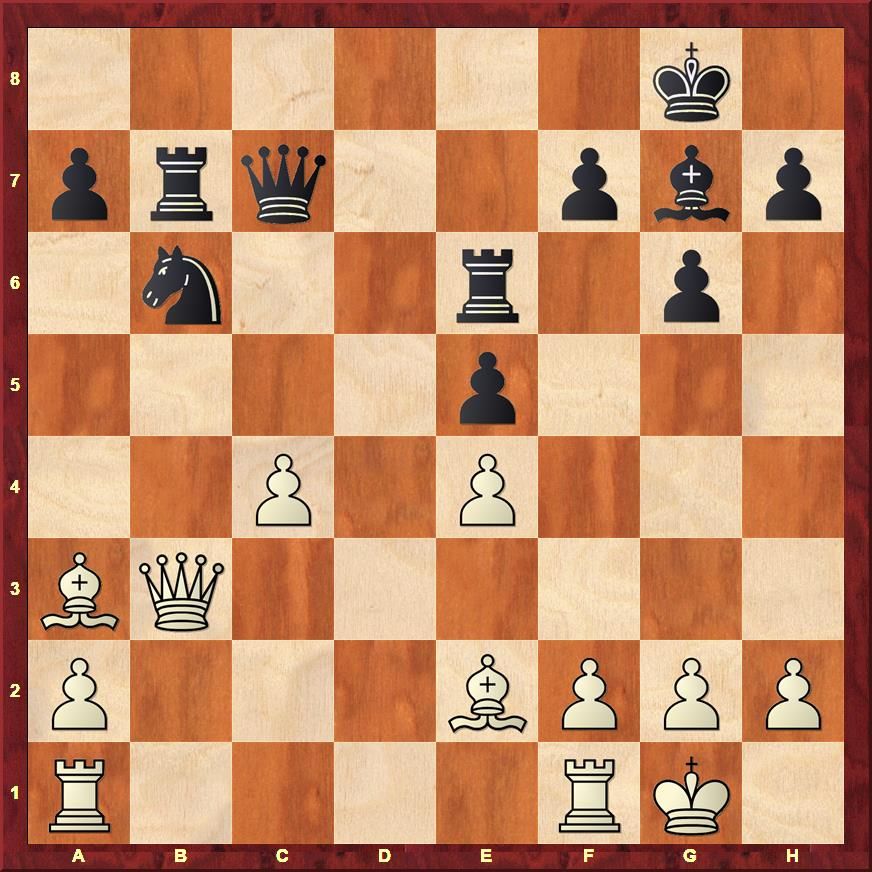 Once he got the bishop pair and also an extra pawn, the rest was not so difficult for Lalith 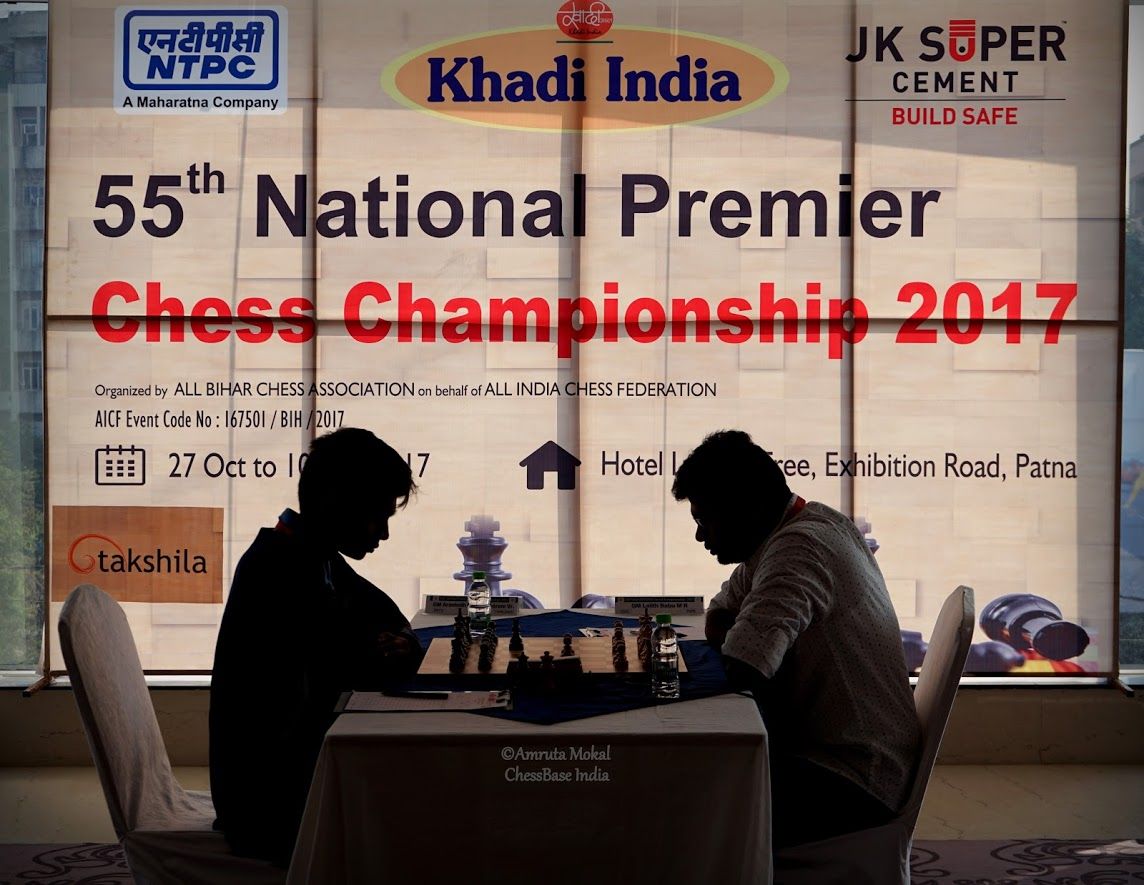 A very nice capture by Amruta showcasing the intensity of the top board battle! | Photo: Amruta Mokal
Lalith speaks about his victory against Aravindh

Another game which caught everyone's attention was Deepan Chakkravarthy's fantastic victory against Swapnil Dhopade. Deepan played the two knights variation in the Caro Kann and we soon reached a position which resembled a lot like the Winawer Variation in the French. 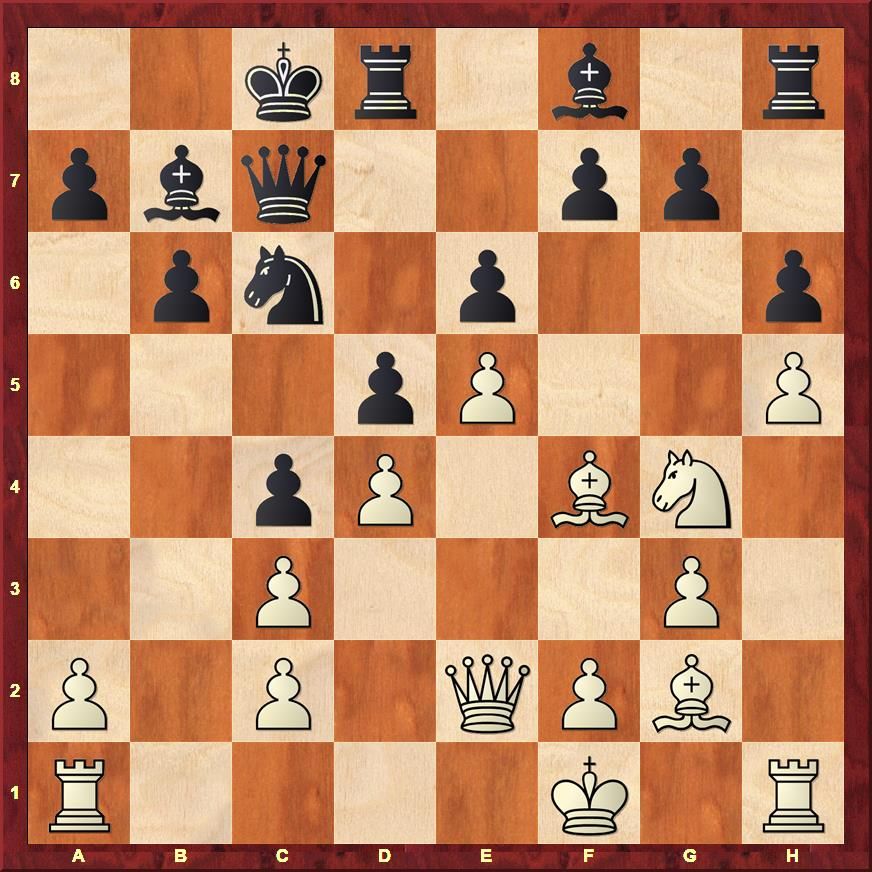 The position is just like a Winawer with a key difference, Black has a dark squared bishop instead of a knight. Who benefits more out of this fact? According to Deepan, it's very difficult to understand. Both the minor pieces have their pros and cons. 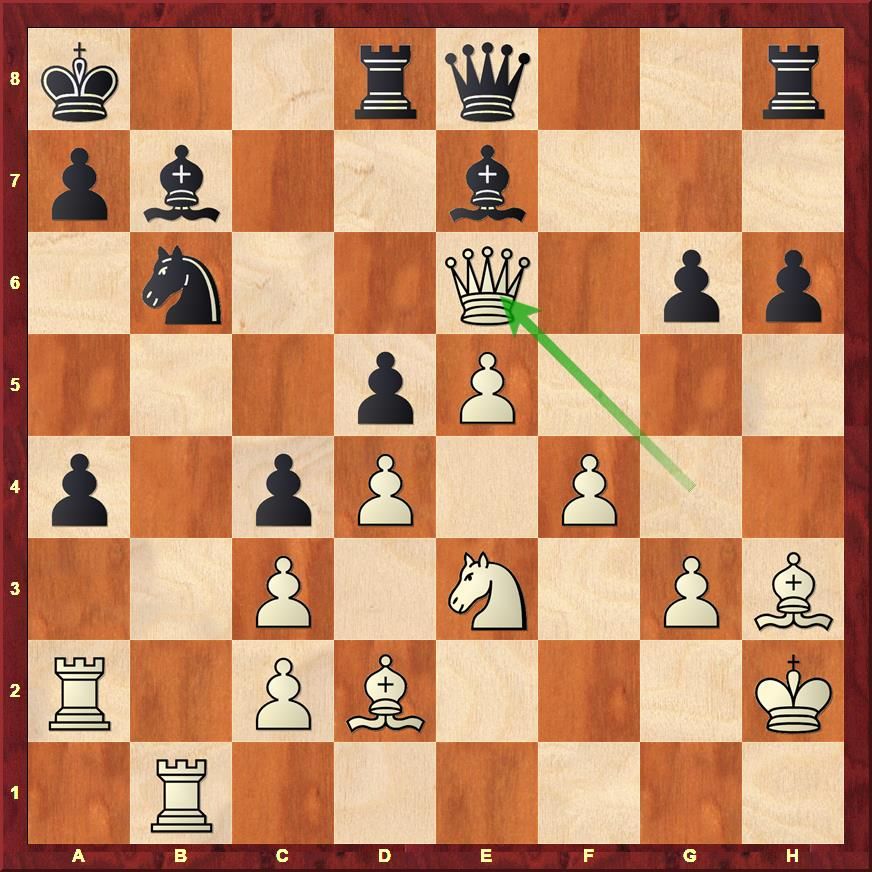 The game really heated up when White took on e6 with his queen! Swapnil had prepared Bc8 in order to trap the queen, but Deepan swooped in his rook - Rxb6 and after Bxe6 Rxe6 he had two pieces.

The key to Black's position after the queen sacrifice was the pawn on d5. It's the only barrier between the white pieces and the black king. With the knight on e3 and the bishop on g2, the d5 pawn soon fell, the floodgates were opened and before you even knew it, Swapnil had to resign the game. 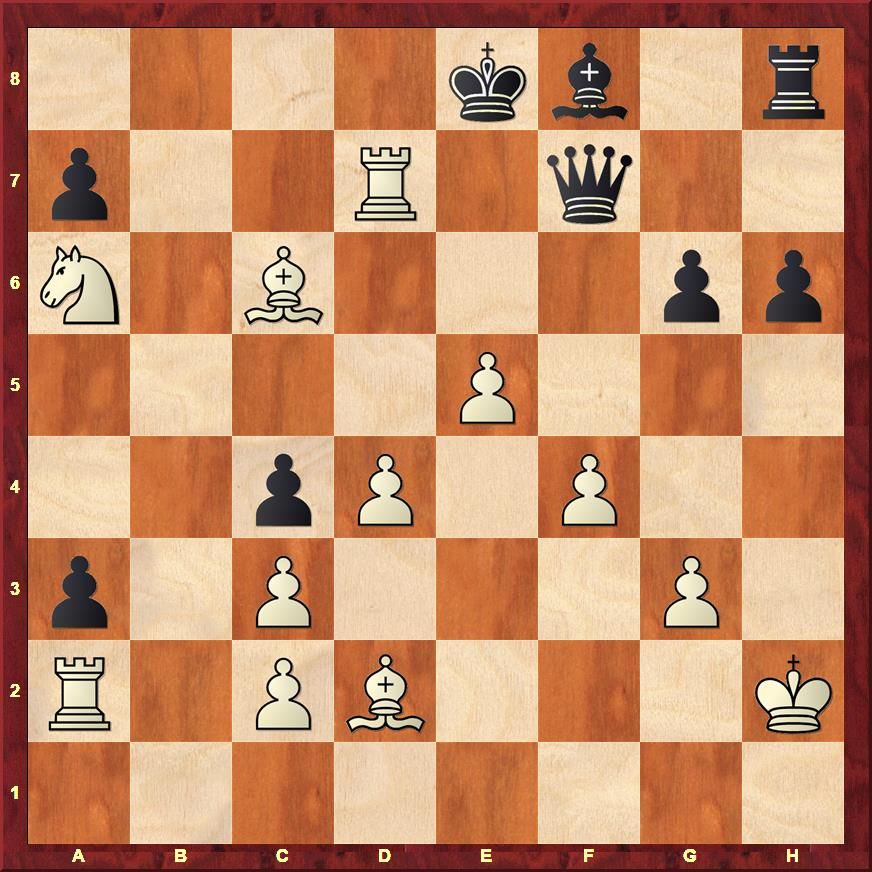 Seeing Swapnil lose in such brutal fashion is not so common
When I saw that Deepan had sacrificed a queen and Swapnil was down to his last few seconds, I rushed and shot this entire video!
We ask Deepan if he likes the name Rajnikant of Indian chess!

Abhijit Kunte is a player for whom I have great respect. In spite of being 40 years old, husband, father to two kids, employed with Petroleum, working with Lakshya Foundation to help chess players all over India, he still manages to play at a very high level. You don't see him blundering so easily. He did that against Sammed Shete in this event, but apart from that he was solid as a rock with seven out of eight draws. 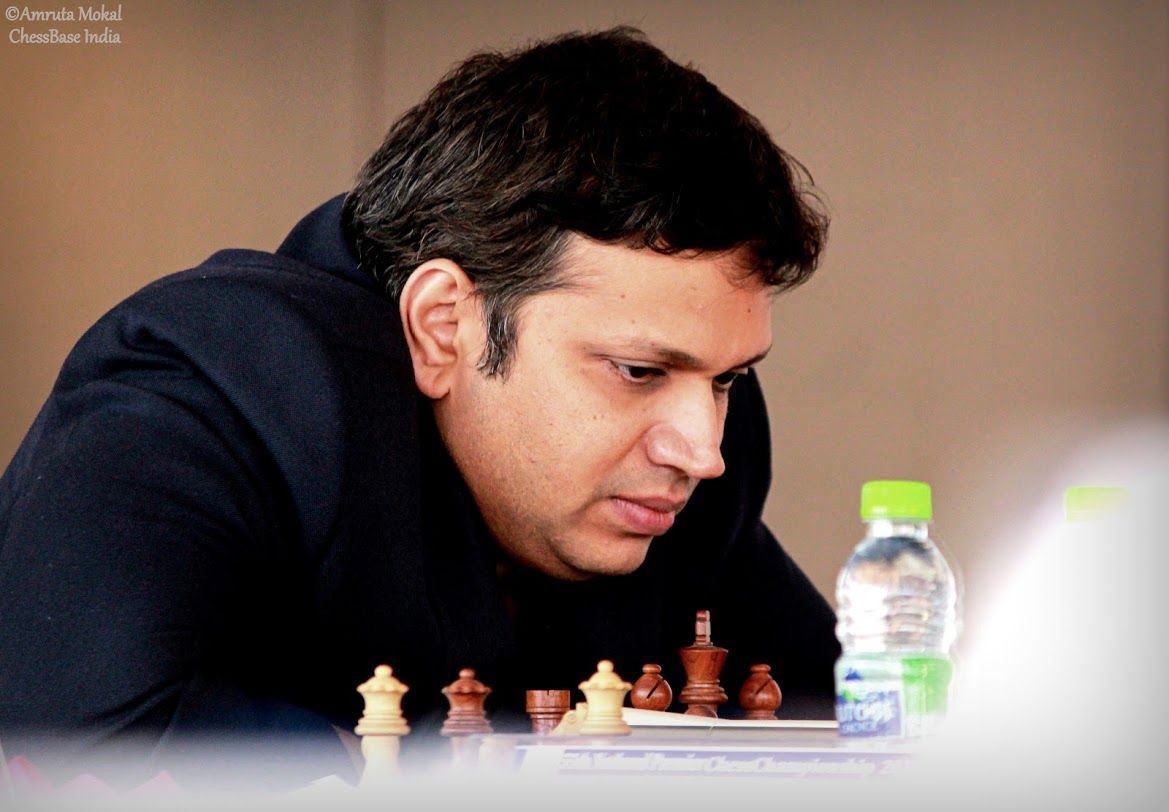 The man who juggles many a hats - Abhijit Kunte! | Photo: Amruta Mokal

But on Monday, Kunte was completely out of form as he blundered two pawns in one move and had to shortly resign against S. Nitin. The lad from Tamil Nadu had prepared a new idea against Abhijit's Sicilian Kan. 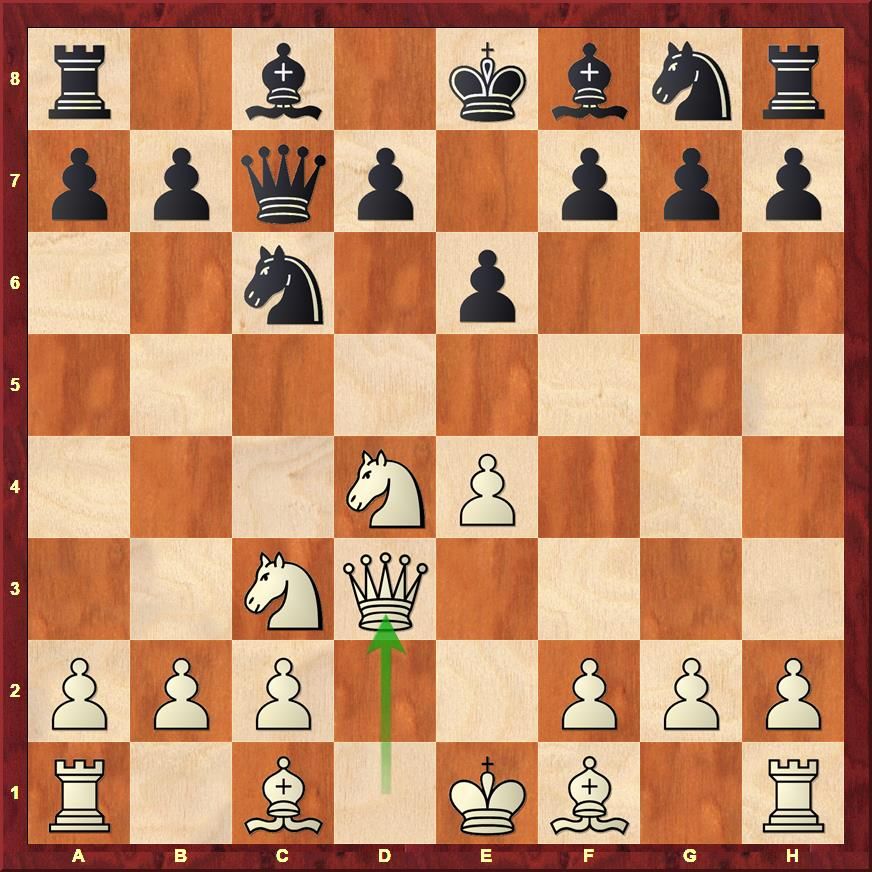 Nitin had prepared this line against Fenil Shah for the last round of the National Challengers 2017. He wasn't able to use it there, but it came in handy over here! 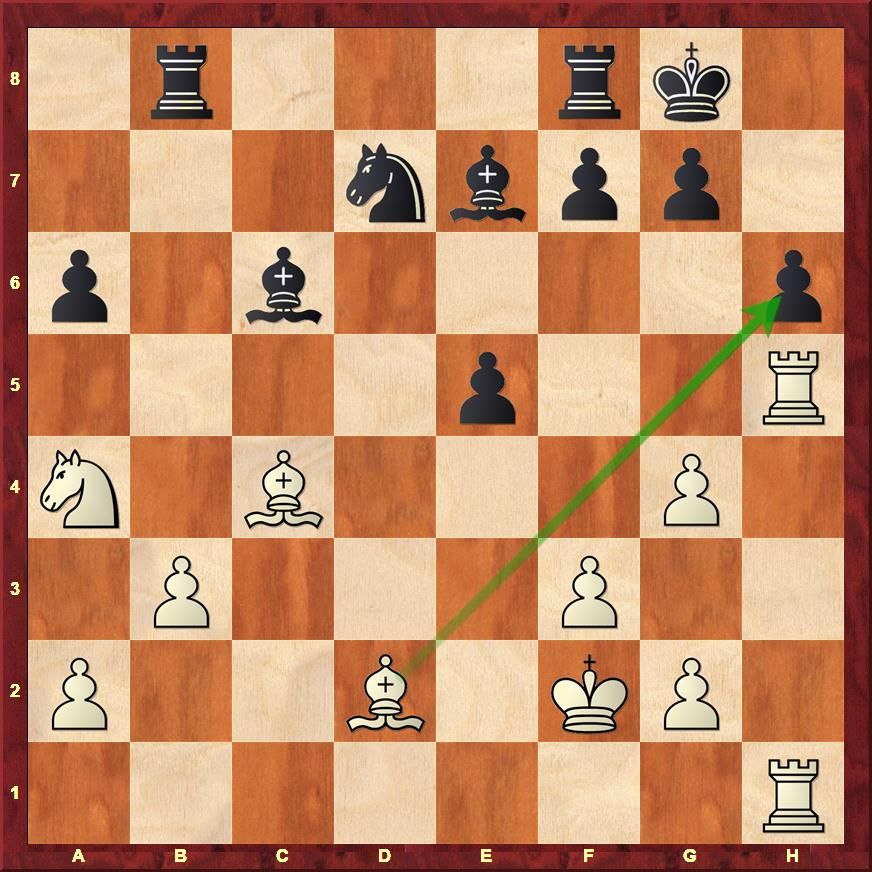 The move that opened the floodgates was Bxh6! What Kunte had missed is that at the end of the line his bishop on c6 would be hanging. So after Bxh6 gxh6 Rxh6 Bf Rg6+! Bg7 and now Rxc6! and the game is over! 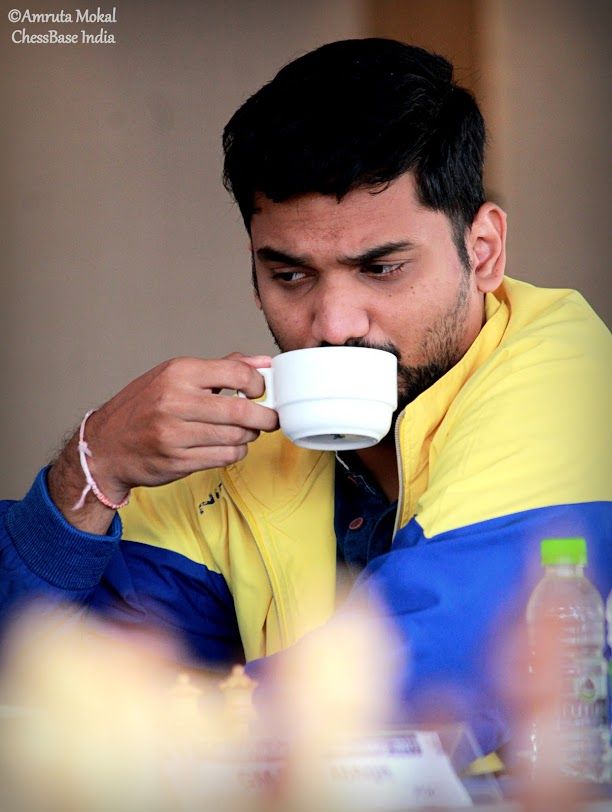 Like a boss! S. Nitin! | Photo: Amruta Mokal
Nitin speaks about his game against Kunte

If there is someone for whom my heart goes out, it has to be GM Himanshu Sharma. Haryana's first grandmaster has faced five defeats at this event and is currently on 2.0/9. The mark of a true fighter is the one who can keep up his spirits even in such a situation. When Himanshu resigned his game against Karthikeyan, I walked up to him, just to strike a conversation. Himanshu did look a bit sad, but he shook my hand powerfully, like he does always and said, "Pata hai kal meine apne room-mate ko party di! Jeet mein to sabhi dete hai, meine socha haar ko manate hai!" (You know, yesterday I gave a party to my room mate. When someone wins you always celebrate, but I decided to celebrate my loss!) 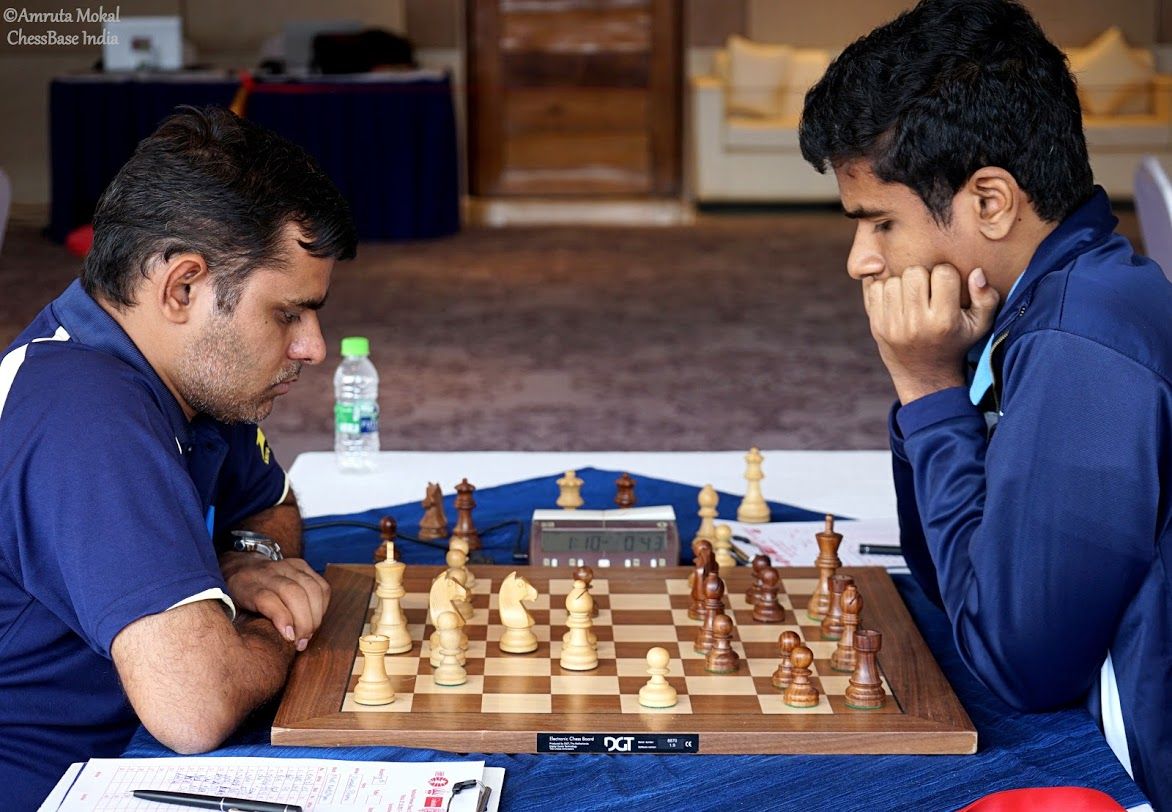 When you are in such bad form, facing Karthikeyan Murali is no piece of cake! | Photo: Amruta Mokal

In the Ruy Lopez Exchange, Himanshu got no real edge out of the opening. In fact, as the game progressed Karthikeyan's position kept getting better. He very smoothly converted the game into a full point.

After I take players' interview I sit down to edit the video and embed the chess board within it. For Karthikeyan's video this was quite a challenge as the boy shoots out moves at the speed of lightning. Just look at his calculations in the video above (3 minutes onwards)

S.L. Narayanan played quite risky chess against Sammed Shete with the white pieces. He let his opponent build up a strong centre and hoped that he would get targets to attack. But Sammed was careful. He just stationed his pieces perfectly and before you knew it, S.L. Narayanan was already losing. The Kerala lad kept finding some tricks to keep the position going, but if Sammed would have been careful, he would have converted the position. As it turned out time pressure coupled with a lack of self belief led to Shete's downfall as Narayanan notched up a win. 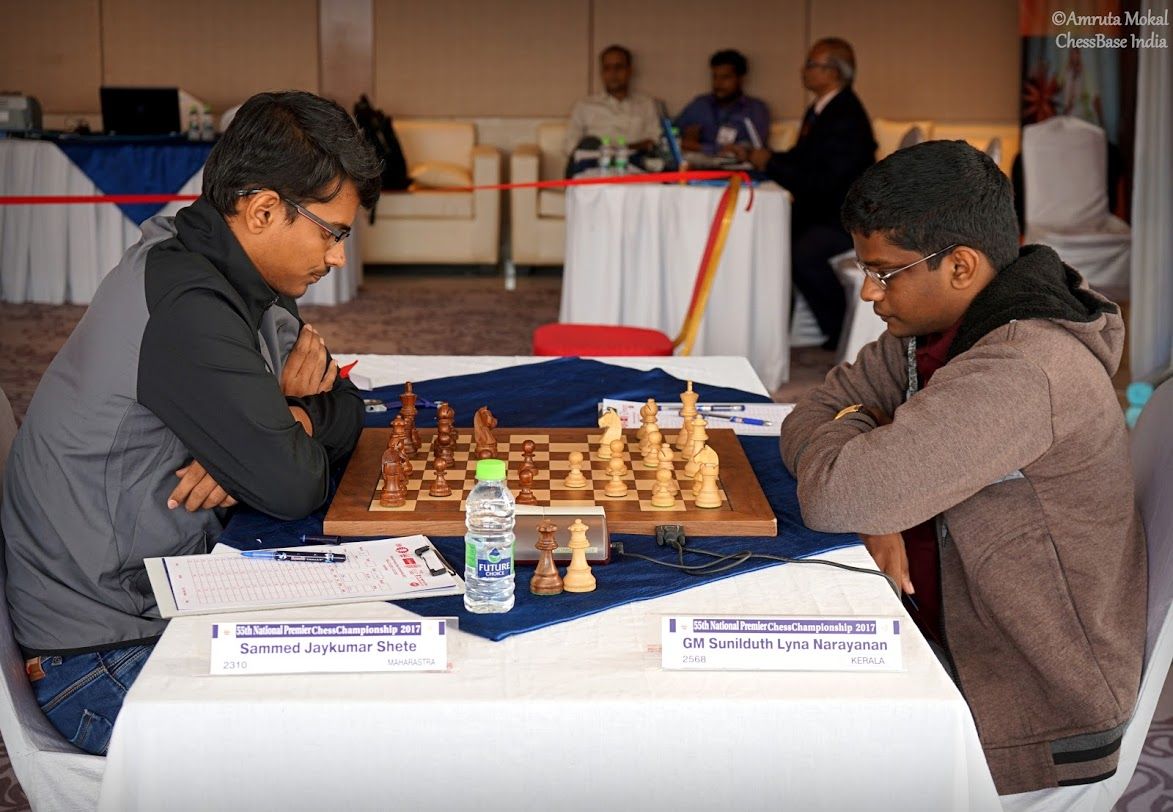 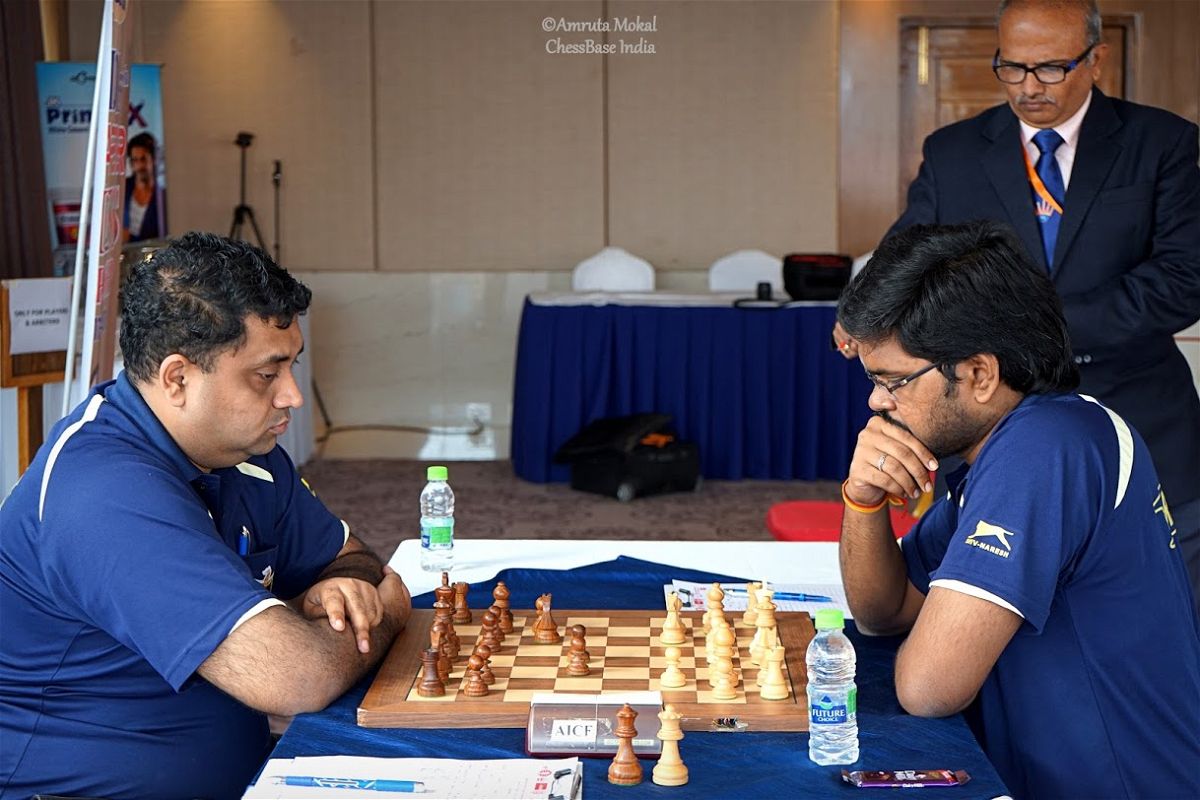 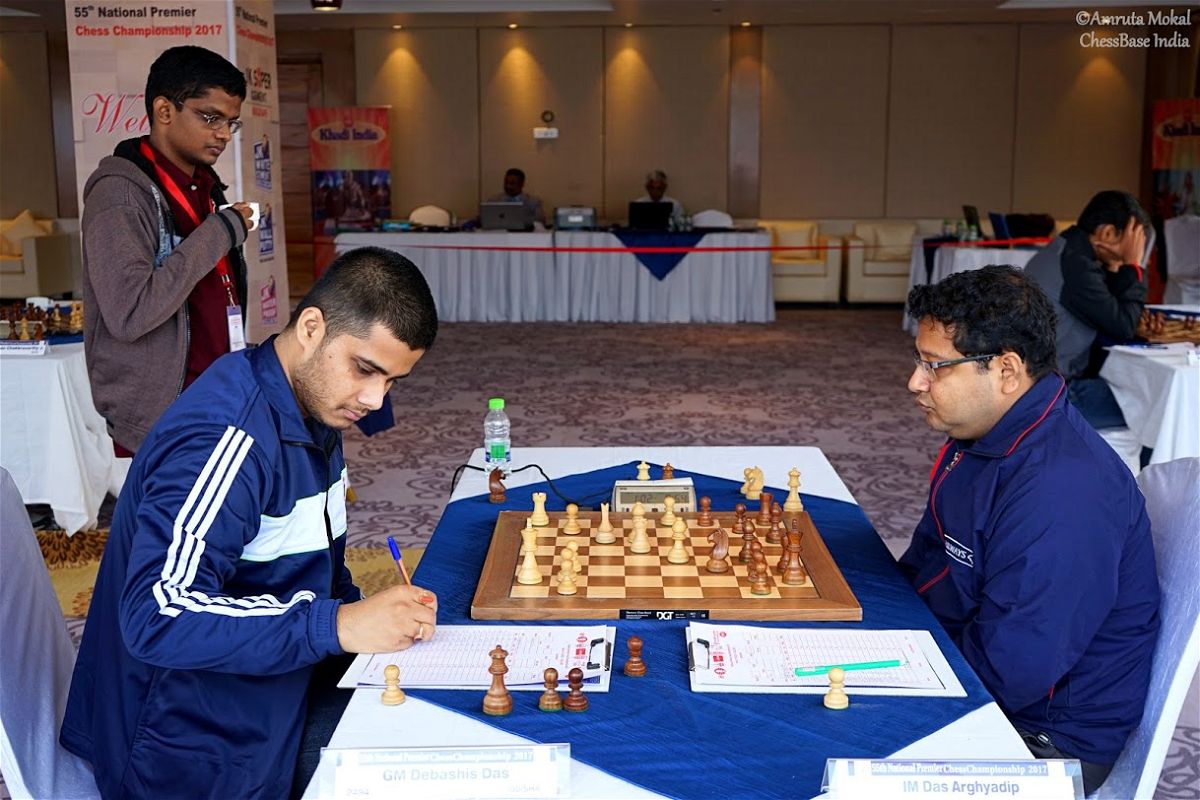 Arghyadip Das came well prepared to the game and gave no real chances to his opponent. A quick draw was the result. | Photo: Amruta Mokal 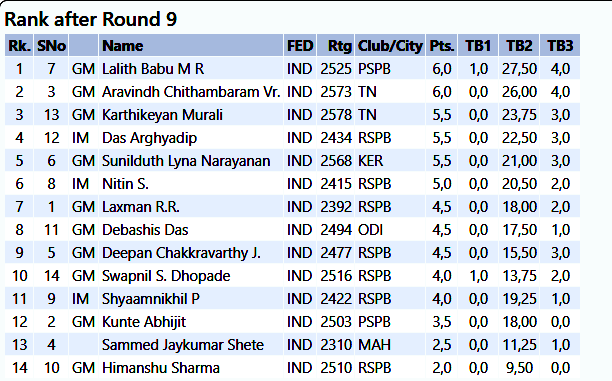 This is turning out to be much more interesting than we had expected. Lalith and Aravindh at the top, followed by Karthikeyan, Arghyadip and Narayanan.

The game which might be extremely interesting is Deepan Chakkravarthy against S.L. Narayanan! 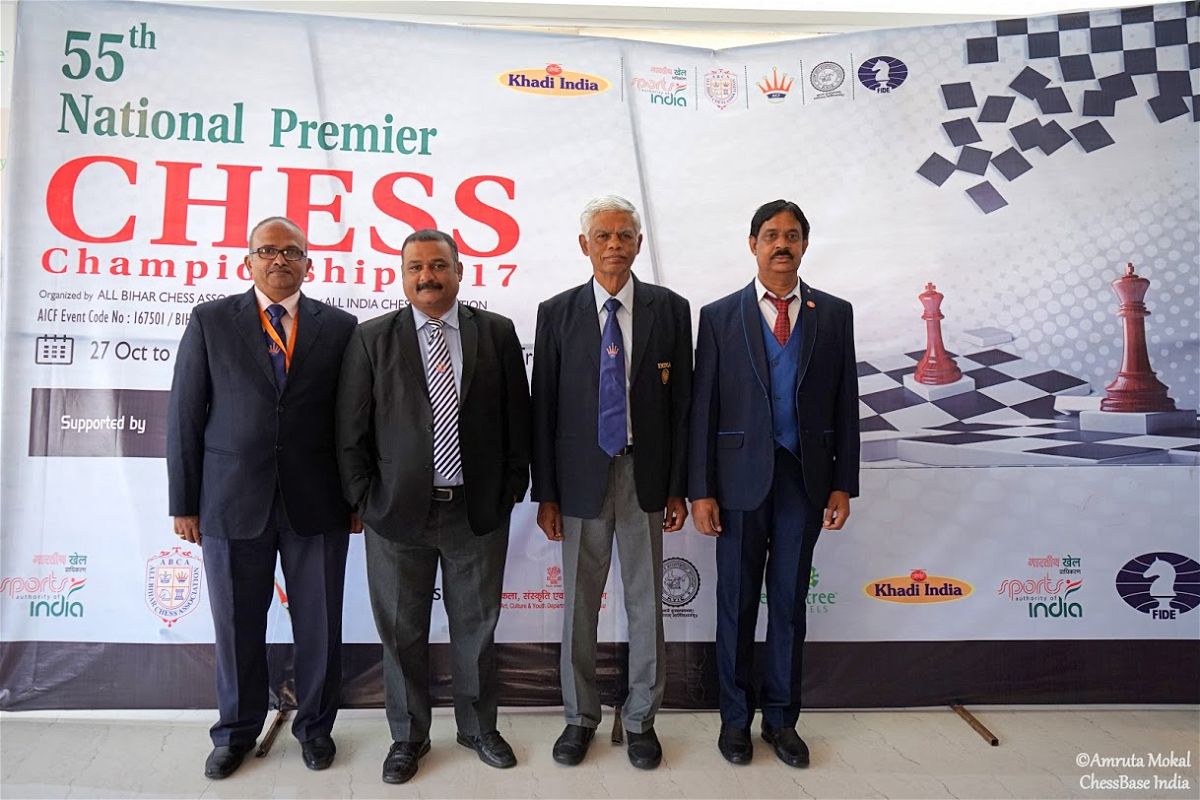 No tournament can be successful without the arbiters. The team of (from left to right) Nitin Shenvi, Dharmendra Kumar, R. Anantharam and P.N. Rao are doing a fantastic job. When I reach the tournament hall in the morning, they are there with everything in place for the players right from scoresheets, to water bottles, to live broadcast. Prof. Anantharam is an embodiment of  energy and tremendous love for the game of chess. He not only works as an arbiter here (he is the chief arbiter!), but he also writes daily reports for All India Chess Federation and other periodicals. At the age of 68 I wonder if I could ever be able to achieve even half of what he is doing right now! Dharmendra Kumar is and has been known in Indian chess circles as an arbiter, but with Bihar Chess on the rise and the state organizing such fine events, he will have to turn his attention towards the field of organization as well. A great asset to Indian chess!