Reigning National under 13 Champion Raja Rithvik R of Telangana and current Commonwealth under 20 girls champion Arpita Mukherjee of West Bengal are leading in Dr. N. Mahalingam 28th National under 17 chess championship 2017 in open and girls category respectively held in Coimbatore, Tamil Nadu. Here is a report consisting of blow by blow update from rounds 5 to 7. While Rithvik has two players behind him with a half point deficit, Arpita has five. Photos by Sathish Kumar K. 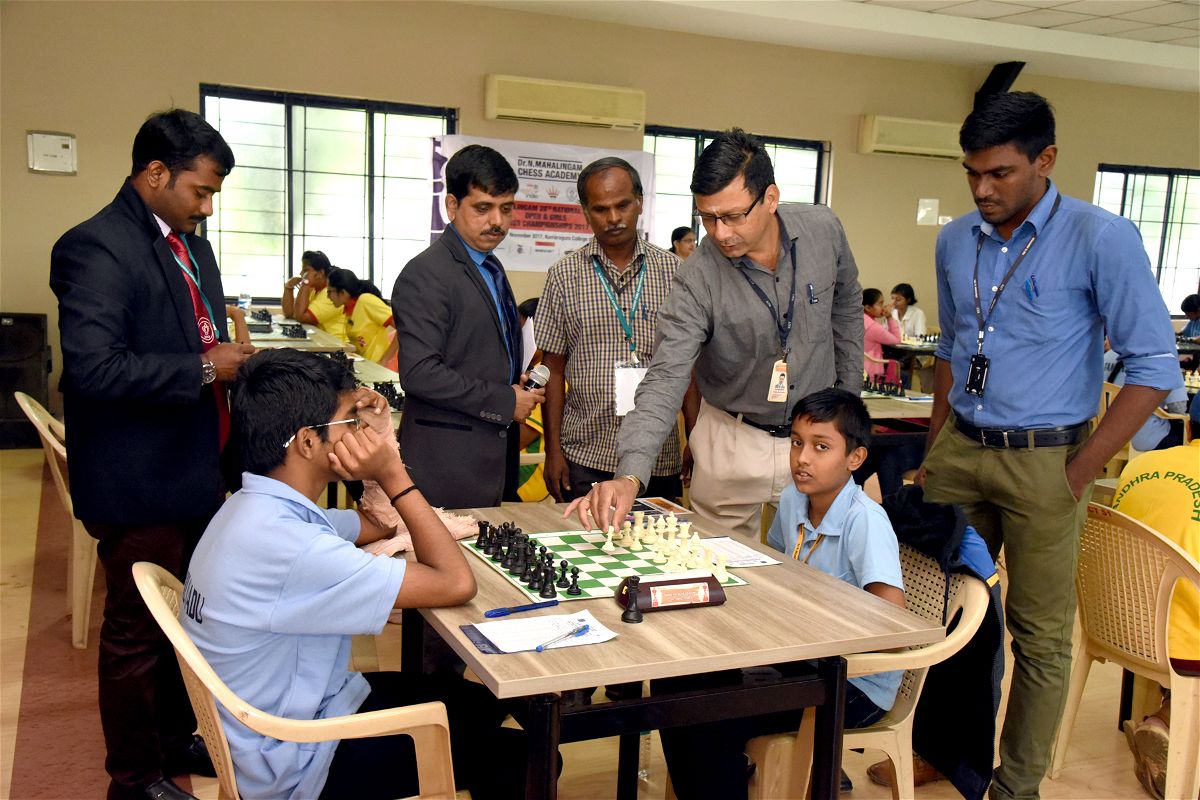 12-year old Manish Anto Cristiano F of Tamil Nadu blundered a pawn and the position too when he played 21. Rhh1 against FM Rathanvel V S of Tamil Nadu. Rathanvel capitalized his opponent's mistake and went on to win the game in 31 moves.

Harshavardhan G B of Tamil Nadu made quick work of Dhananjay S of Chattisgarh in a Classical King's Indian Defence. 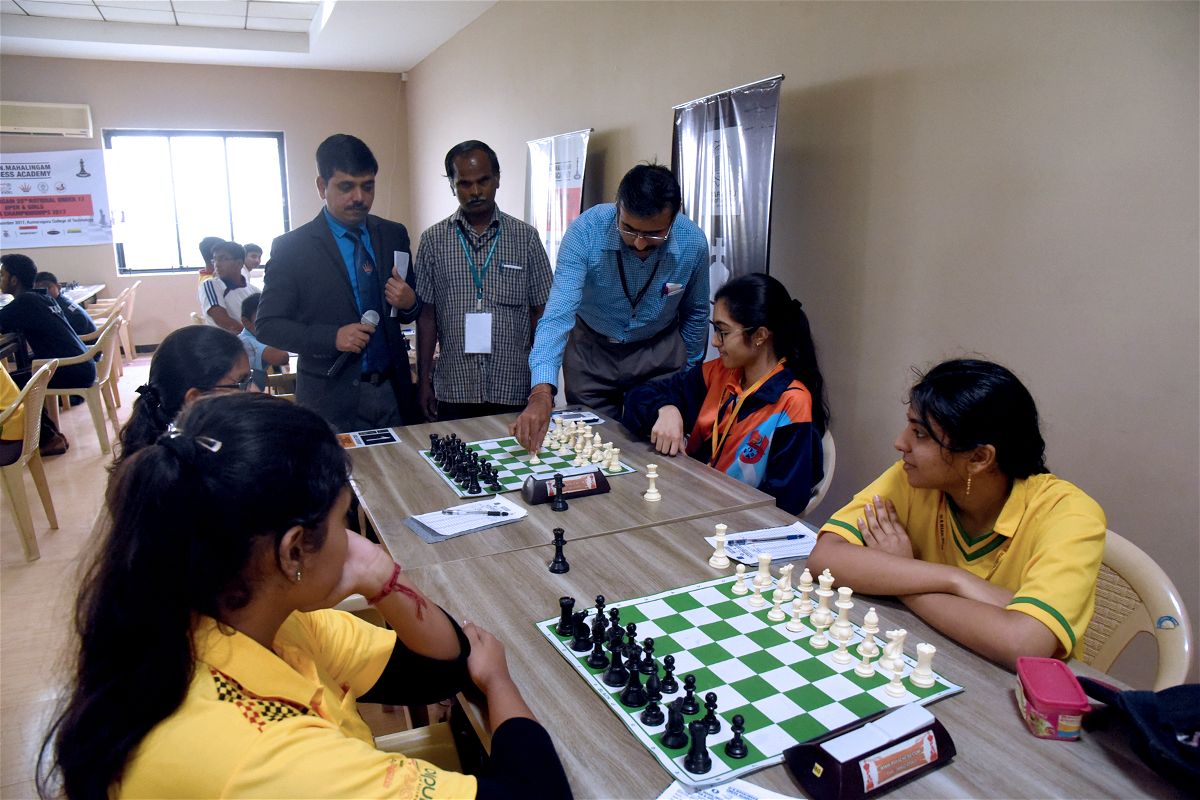 Round 5 inaugural moves are made on top board of girls category | Photo: Sathish Kumar K

WIM Sakshi Chitlange of Maharashtra got an early advantage in the middlegame when her opponent, overnight leader Niharika Ch of Andhra Pradesh made a tactical error with 23...Rb6 and lost an exchange in King's Indian Defence. Afterwards she managed to have the position equal, but after several mistakes, Sakshi took advantage of them all and made them surmountable.

Harshita Guddanti of Andhra Pradesh drew with WFM Arpita Mukherjee of West Bengal in Sicilian Defence Najdorf Variation. Despite getting a chance to gain clear advantage in the middle game, Harshita missed when she played 23. Nd6. Later in the endgame, she need not require to play 29.Bxb5 to maintain an edge in the position.

Round 6: Rathanvel maintains sole lead with 100% score in the open category; Arpita and Tejaswini in the joint lead among girls 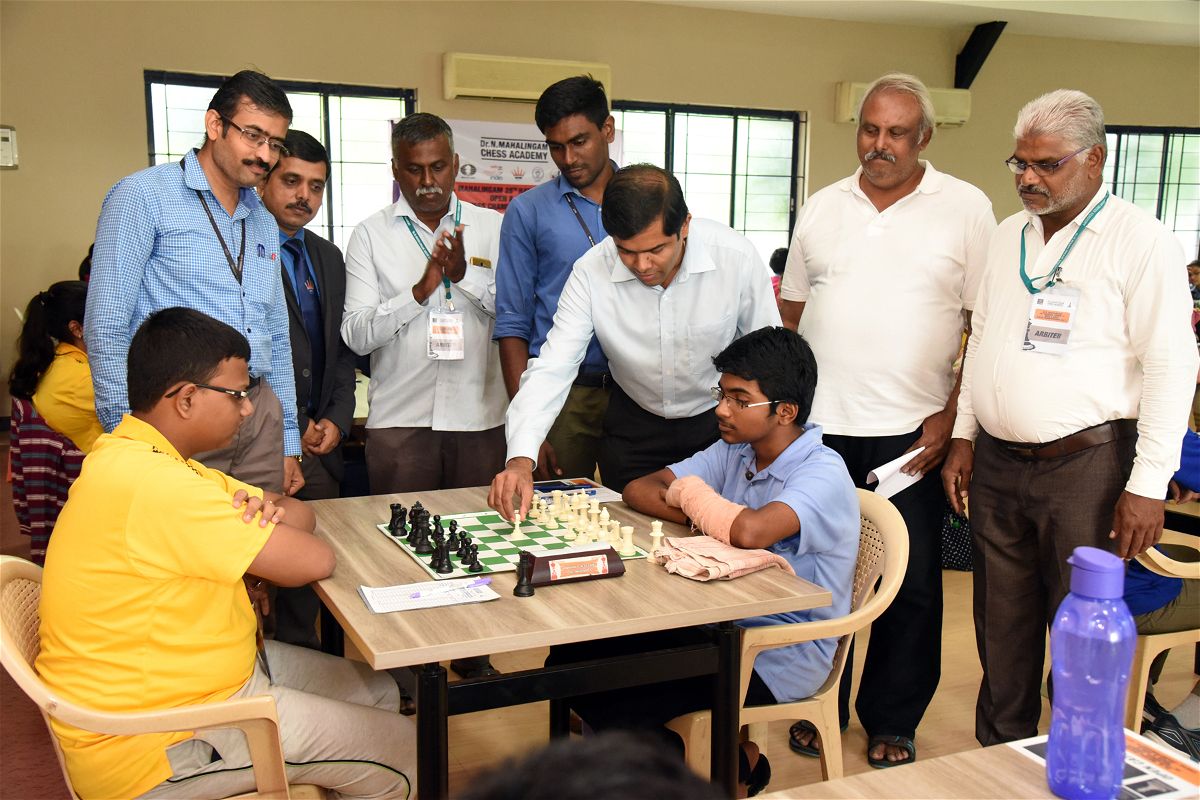 Inaugural move for Round 6 is made in the battle of the FMs | Photo: Sathish Kumar K

FM Rathanvel V S of Tamil Nadu opted for the Advance Variation in Caro Kann Defence against FM Mitrabha Guha of West Bengal. Mirabha made a slight error when he played 19...Bf5 and later when he played 29...Qf7 which gave White a clear advantage in the endgame.

WFM Arpita Mukherjee dethroned WIM Sakshi Chitlange from the leading position in a French Defence Tarrasch Variation after the latter made a terrible blunder with 30...Qc1 in a Queen and Rook endgame which cost her the game.

Round 7: Raja Rithvik and Arpita Mukherjee are sole leaders Raja Rithvik R got a fantastic position out of the Symmetrical English Opening against Rathanvel V S. Rithvik missed an early win when he played 32. Qf3 instead of Qe4+ resulting in either checkmate or gain of the queen for a rook.

Sibi Visal R defeated Nithin Babu of Kerala in another Symmetrical English Opening after the latter blundered a pawn with 30...Rfe8. Siba also missed a quicker win when he played 34.Qxd4

Top seed Arjun Erigaisi got back to his winning ways when he defeated Srihari L of Puducherry in King's Indian Defence after Srihari blundered terribly with 26.Nxd1 and lost the game in the next three moves.

Deota Snehil S defeated Jeet Jain of Gujarat in a clinical fashion in Giuco Piano opening and got a fantastic attack after 15...g4. 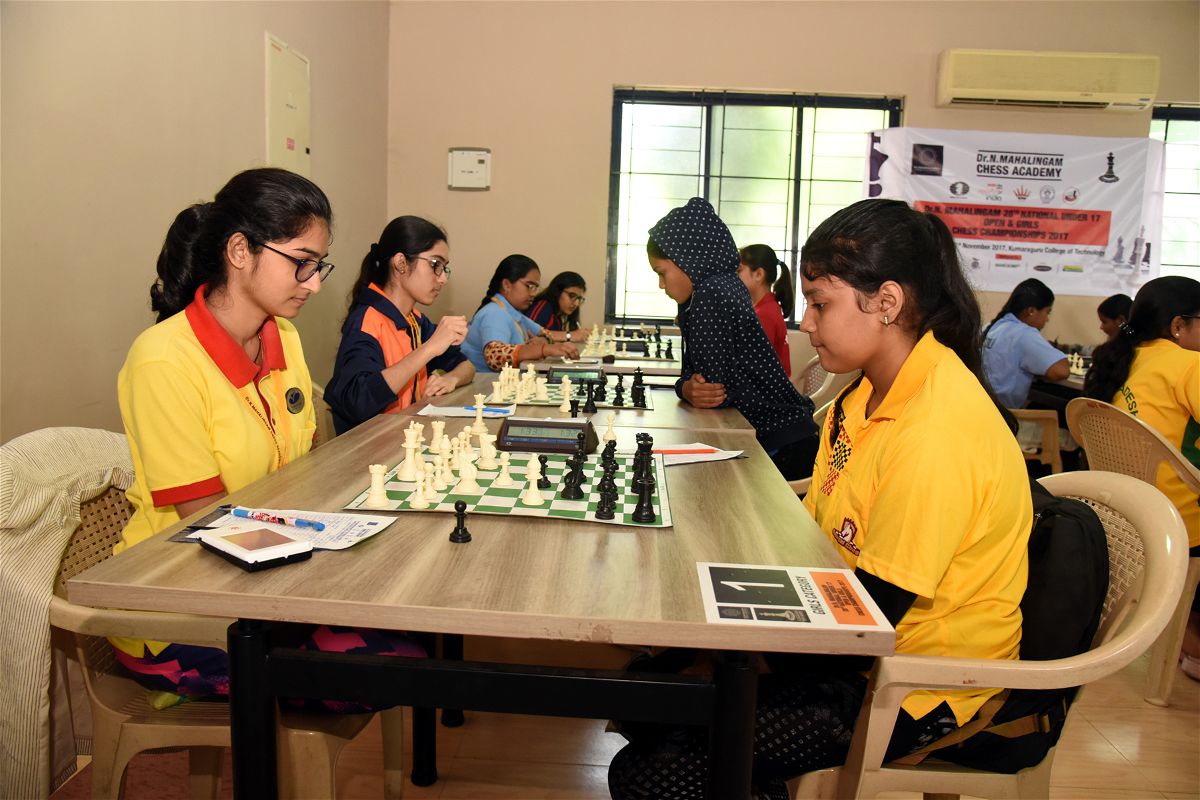 WFM Arpita Mukherjee defeated WIM Tejaswini Sagar emphatically in Sicilian Najdorf after Tejaswini missed an opportunity to gain advantage when she played 27.b5. Arpita's onslaught of the pawns on the kingside became too much for Tejaswini's Kingside with 29...f3.

Stuti Bhanot of Haryana defeated WCM Jyosthna L of Tamil Nadu in a King's Indian Defence Smyslov System when the latter blundered her queen in a seemingly equal position when she played 20. Qc2