The reigning National Under 13 Champion, Raja Rithvik R of Telangana and Commonwealth Chess 2017 Under 16 girls champion, K Priyanka of Tamil Nadu have emerged as the champions of Dr N. Mahalingam 28th National Under-17 Chess Championship 2017 in the Open and Girls' category, respectively. Even though both champions tripped once in their run and lost a game each, they managed to overcome the setback and emerged as title winners in their respective age category. Here is a report full of photos and games with photos by Sathish Kumar K. 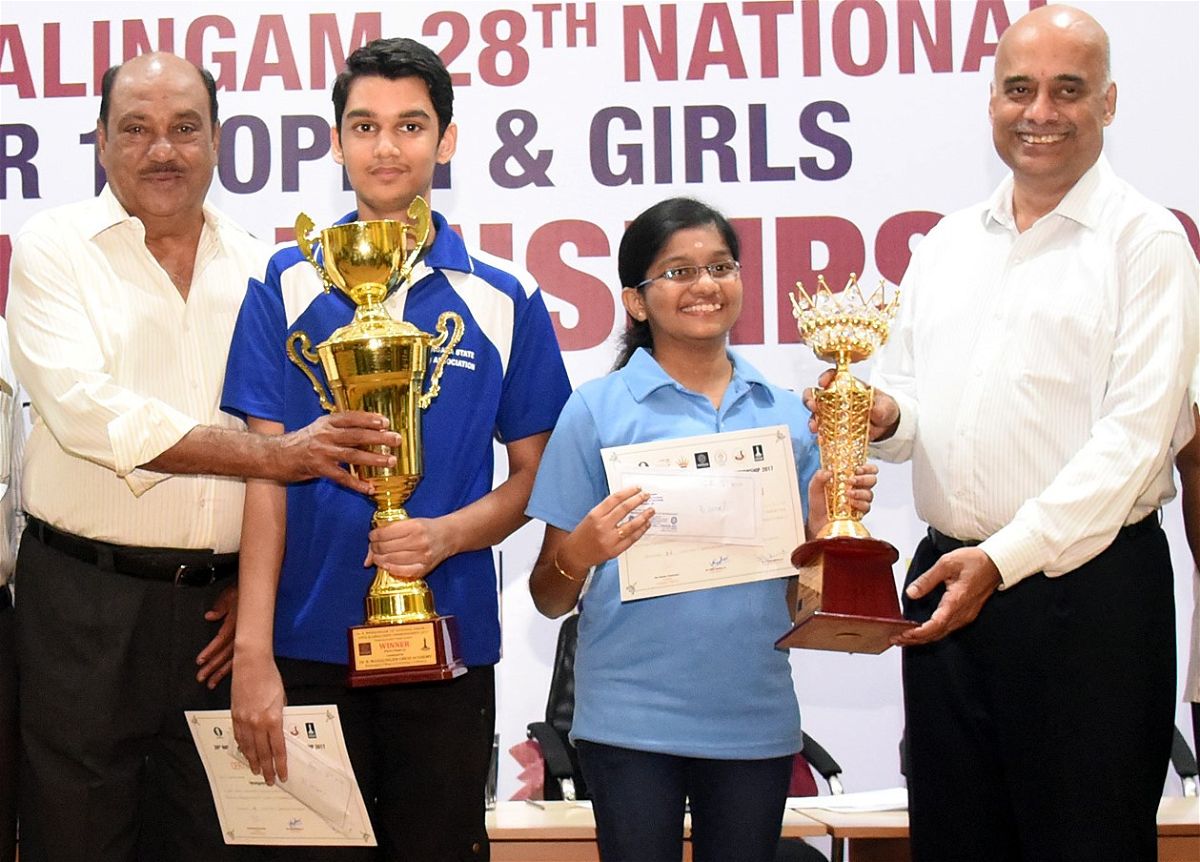 After his win at the National Under-13 championship this year, CM Raja Rithvik R of Telangana had high hopes at the Dr. N. Mahalingam 28th National Under-17 Chess Championship 2017. But he soon realised that the path to the title wasn't an easy one to walk on. His first fumble came in the third round as he drew against Cheela Naga Sampath. He won his next five rounds to make his way back into a sole lead at the end of Round 7 with a score of 5.5/7 but another defeat at the hands of the top seed of his group, Arjun Erigaisi, in the ninth round pushed him back again. Let's take a look at the game:

Deciding to take things slow after this blow, he went for a quick draw against FM Nitish Belurkar of Goa in round nine.

But once he got back his composure, he went back in business and scored a crucial win against Tarun V Kanth of Tamil Nadu in the last round to carve his name on the champion's crown. 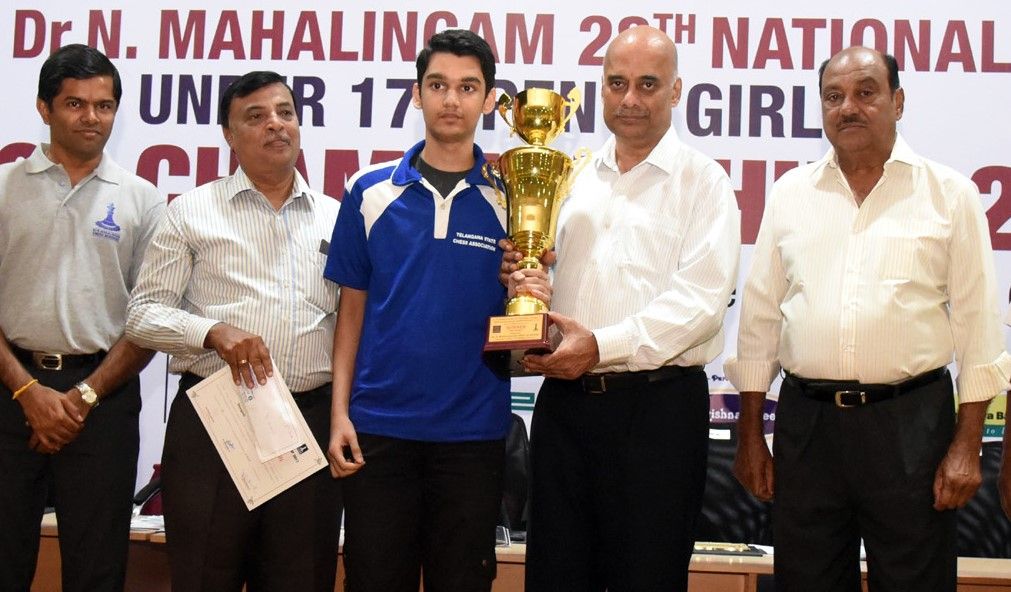 Raja Rithvik R scored 9.0/11 and he is the 28th National Under 17 Chess Champion in the Open category | Photo: Sathish Kumar K

After drawing against R Rathneesh of Tamil Nadu in the second round, top seed in the open category, FM Arjun Erigaisi, suffered a shocking defeat against Chaitanya Sairam Mogili of Andhra Pradesh in the third round. Taking stern steps to control the damage, he won the next six rounds defeating FM Mitrabha Guha and the eventual winner of the event Raja Rithvik R on his way back into title contention.

Arjun needed a win in the last round to become champion. A draw would have given Rithvik a chance to outscore Arjun and become champion. In the case of a tie between him and Rithvik however, the tie-break score was in Arjun's favour since he has defeated Rithvik in their direct encounter.

Arjun defeated Mitrabha in the eighth round in an unusual queen's pawn opening.

Arjun agreed to a quick 18-move draw in Sicilian Najdorf against FM Rathanvel V S in the penultimate round hoping to pull a win in the finale and win the title. This clearly backfired.

Going into the final round, Arjun was pitted against the Goan player Nitish Belurkar. The latter essayed the Dutch Defence in response to Arjun's 1.d4 and despite getting an edge out of the opening, Arjun wasn't able to make much of his advantage. By the 26th move, the players reached an endgame with a rook, a dark-squared bishop and five pawns each. Seeing no prospects of squeezing out a win, Arjun agreed to a draw and conceded the title to his nearest rival, Rithvik, who had succeeded in defeating Tarun Kanth in his final round game. 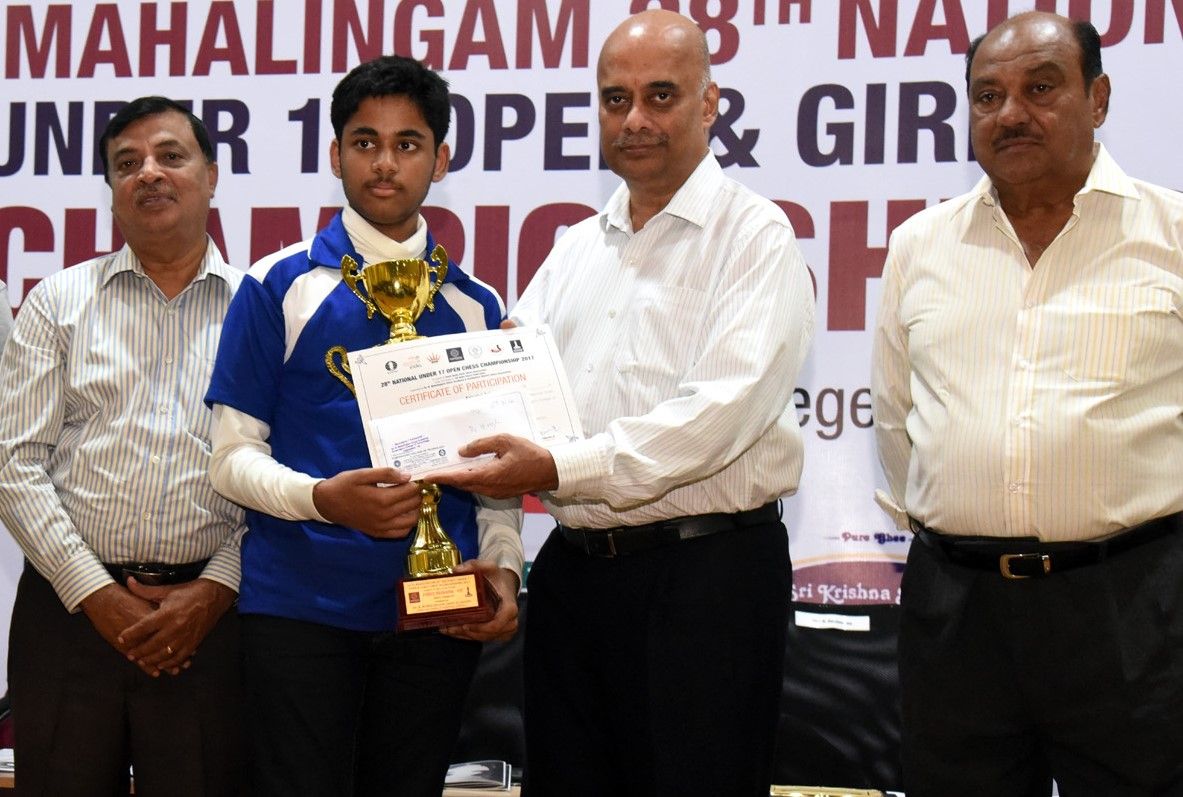 Despite suffering defeats against Rathanvel V S in the sixth round and Arjun Erigaisi in the 8th round, Mitrabha made a strong comeback by winning the last three rounds and secured the second runner-up position. Mitrabha had an easy win in the last round against Manu David Suthandram R of Tamil Nadu in a Symmetrical English Opening after his made a huge positional mistake with 28...f5. 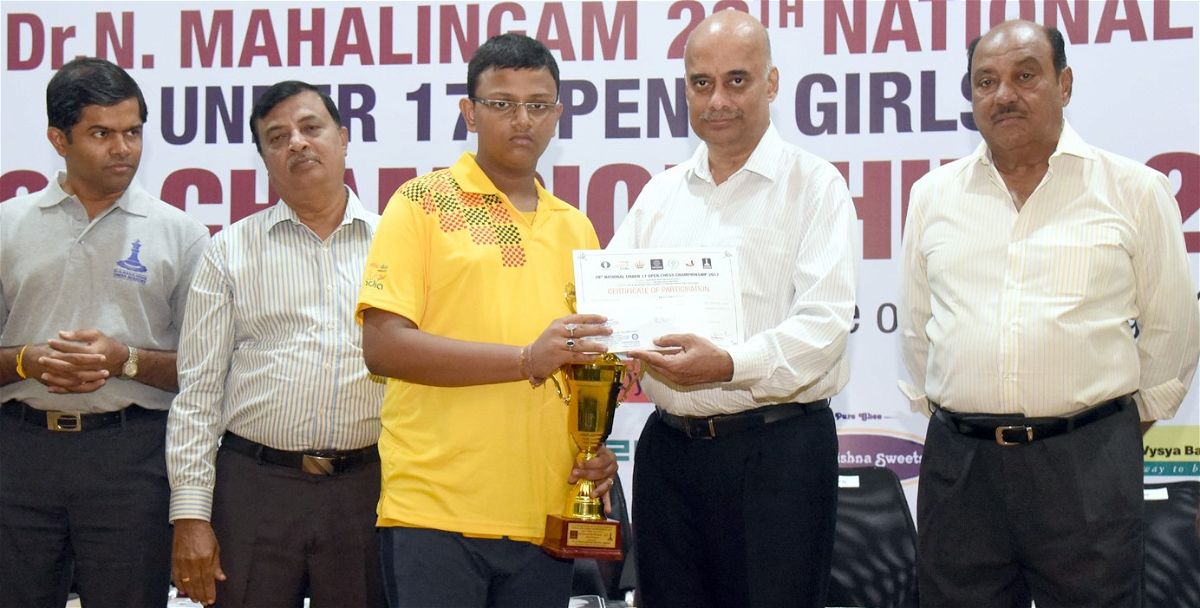 Mitrabha Guha scored 8.5/11 and he was placed 3rd as he lost against Arjun Erigaisi in the direct encounter | Photo: Sathish Kumar K

Earlier this year, K Priyanka had won the Gold medal at Commonwealth Chess Championship in the under 16 girls category. Continuing her wonderful form, she won Dr N. Mahalingam 28th National Under-17 chess championship in the girls' category by scoring 8.5/11. The tournament, however, was a tumultuous ride for her. An early setback against Niharika Ch in the third round and draws against Jyothsna L and Arpita Mukherjee in the sixth and the eighth rounds turned out to be tough hurdles on her way to the title. However, keeping her spirit high, she came back with back to back victories against Sakshi Chitlange and Tarini Goyal in the ninth and the tenth rounds to bring herself back into the top spot. In the final round, a draw was enough for her to clinch the title as her nearest rival, Arpita Mukherjee had also drawn her game while Priyanka had the better tie-break.

Priyanka K of Tamil Nadu defeated WIM Sakshi Chitlange of Maharashtra in the ninth round in a Caro Kann Exchange. The game was a marathon that lasted 80 moves!

Another crucial win for Priyanka came in the penultimate round when she defeated WFM Tarini Goyal of Chandigarh. This too was a long game that began with the exchange variation of the Caro Kann and lasted 65 moves.

In the last round against WIM Tejaswini Sagar, Priyanka opted for the Classical variation of Sicilian Defence and settled for a draw in the queen and pawn endgame. 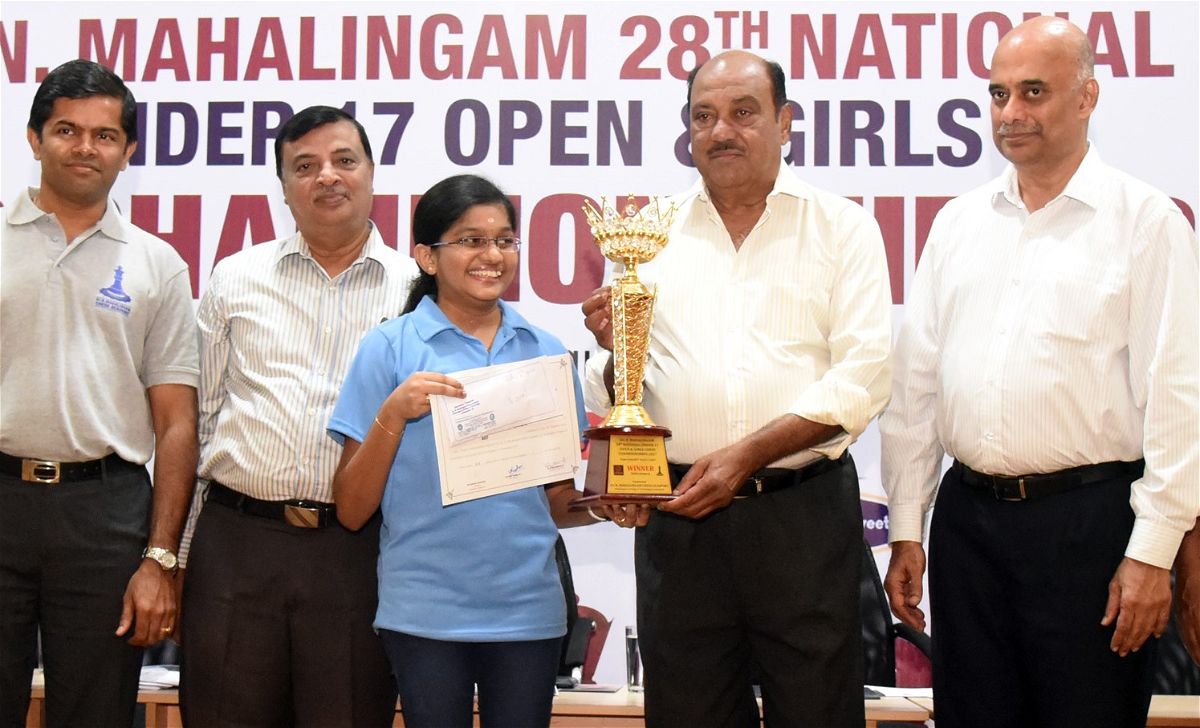 Priyanka K is the champion in 28th National under 17 chess championship in the girls category | Photo: Sathish Kumar K

Despite leading the tournament till tenth round, Commonwealth Gold medalist, WFM Arpita Mukherjee had to settle for the second place in the tournament. Her draws against Kavisha S Shah of Gujrat and Niharika Ch of Andhra Pradesh in the last two rounds cost her dearly as it allowed Priyanka to not only catch up with her in terms of score but also surpass her on the tie-break. Arpita scored 8.0/11. She faced 8 opponents who finished in top 10 in the girls category.

In the last round against Niharika, in Sicilian Defence Najdorf variation, Arpita got a clear advantage after 20...Nc5 and a decisive advantage after 22. Bd3. Unfortunately, she failed to capitalize on her opponent's mistakes and ended up conceding a draw. 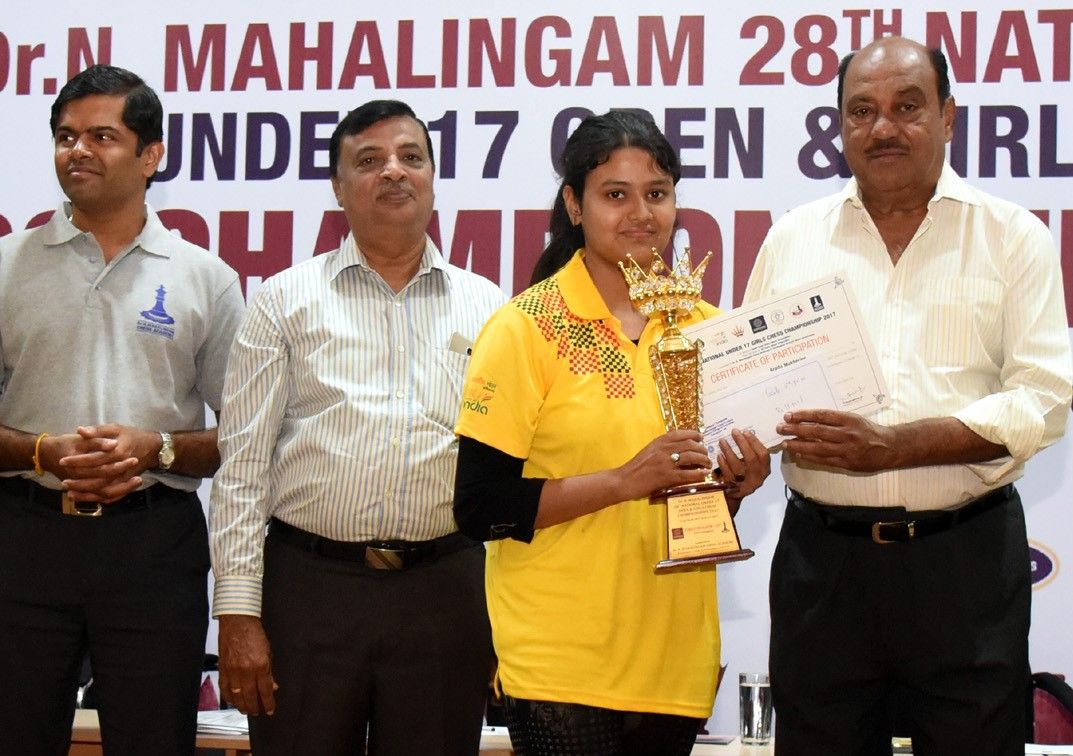 WFM Tarini Goyal of Chandigarh also had a shaky start as she suffered a loss against Senthamizh Yazhini S of Tamil Nadu. Her only other loss in the tournament was against the champion Priyanka K in the penultimate round. She defeated Harshita Guddanti of Andhra Pradesh in the last round to secure second runner-up position. Tarini also scored 8.0/11 along with Arpita and Tejaswini. However, due to a better tie-break score, Arpita got the 2nd position; Tarini, the 3rd; and Tejaswini, the 4th.

Tarini sacrificed an exchange with 13. Nf4 to gain initiative on the kingside and later she launched a tremendous attack on the kingside which became surmountable for Harshita. Tarini had a winning position after her opponent blundered the queen with 22...Nc6 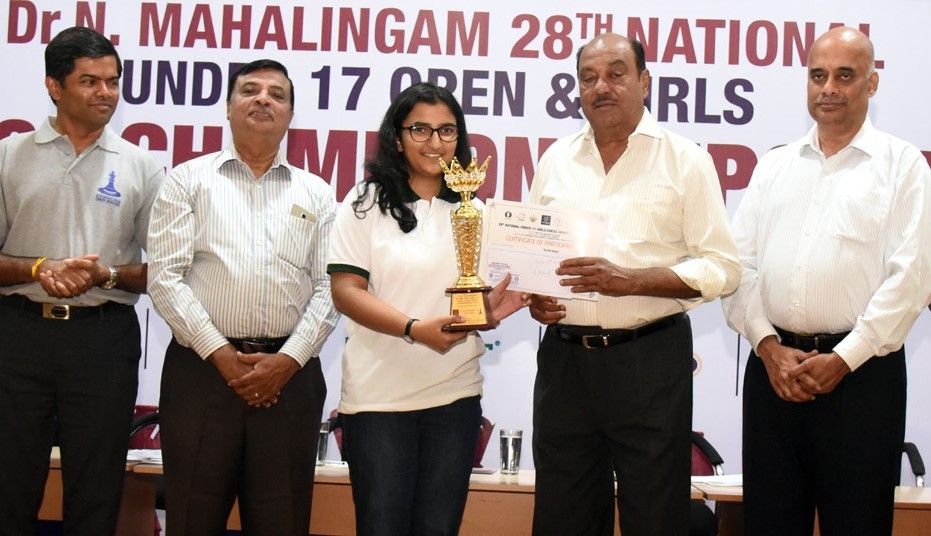 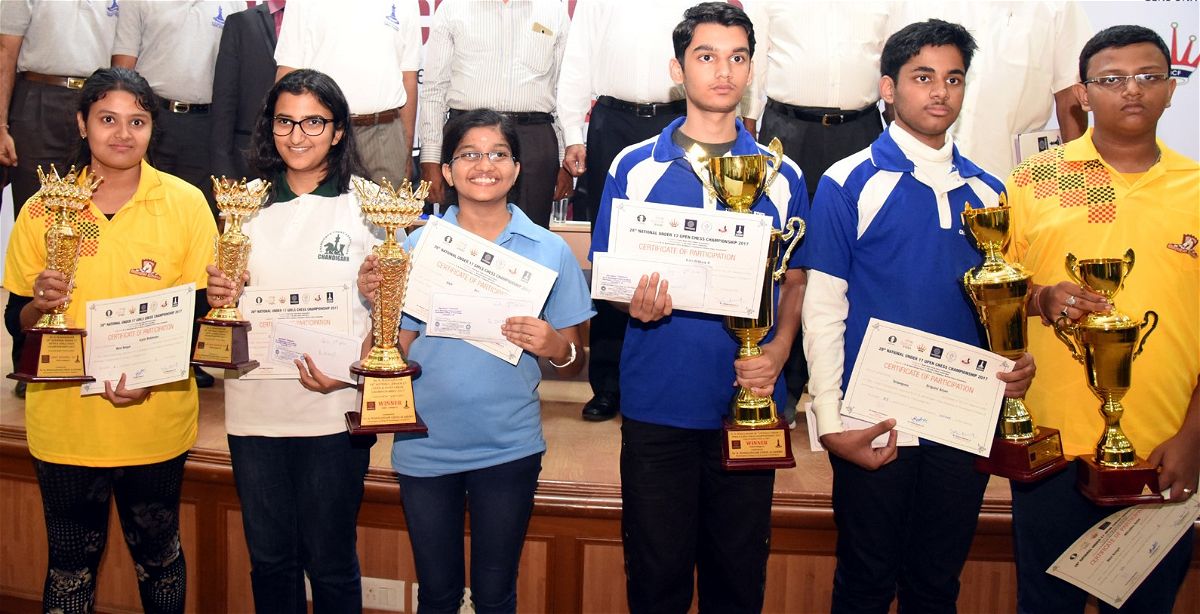