Mumbai to Dubai: A first look at the FIDE World Championship Match 2021

The World Championship is about to begin on the 26th of November 2021. Sagar Shah and Amruta Mokal have made their way from Mumbai to Dubai to bring you on the ground coverage of the biggest event of the year. Magnus Carlsen is going to play his 5th World Championship Match in the last 8 years, while this will be the first shot at the title for the Challenger Ian Nepomniachtchi. A lot of interesting things have already happened leading to the match, and in this article we tell you about the venue of the event - the massive Dubai Expo 2020, the press conference and the opening ceremony! Along with it Sagar gives you a personal account of his experience of travel from India to the UAE and reaching the World Championship venue.

I haven't visited too many Expos in my life. But there used to be one that happened close to home in Mumbai at a place called the Bandra Kurla Complex. There used to be huge tents set up, with each tent selling a specific genre of commodities. One was set up for food, another for furniture, another one for clothing and so on. That's how an expo was defined in my head. When I got to know that the FIDE World Championship Match 2021 was going to be a part of the Dubai Expo, I felt that one of the tents/buildings would be dedicated to the match, just like I had seen in my native city. But when I reached the Dubai Expo 2020 on 24th of November 2021, I realized how wrong I was!

We decided to stay close to a metro station called Mashreq and the Dubai Expo has a Metro station right outside it. It takes us roughly an hour to travel to the venue 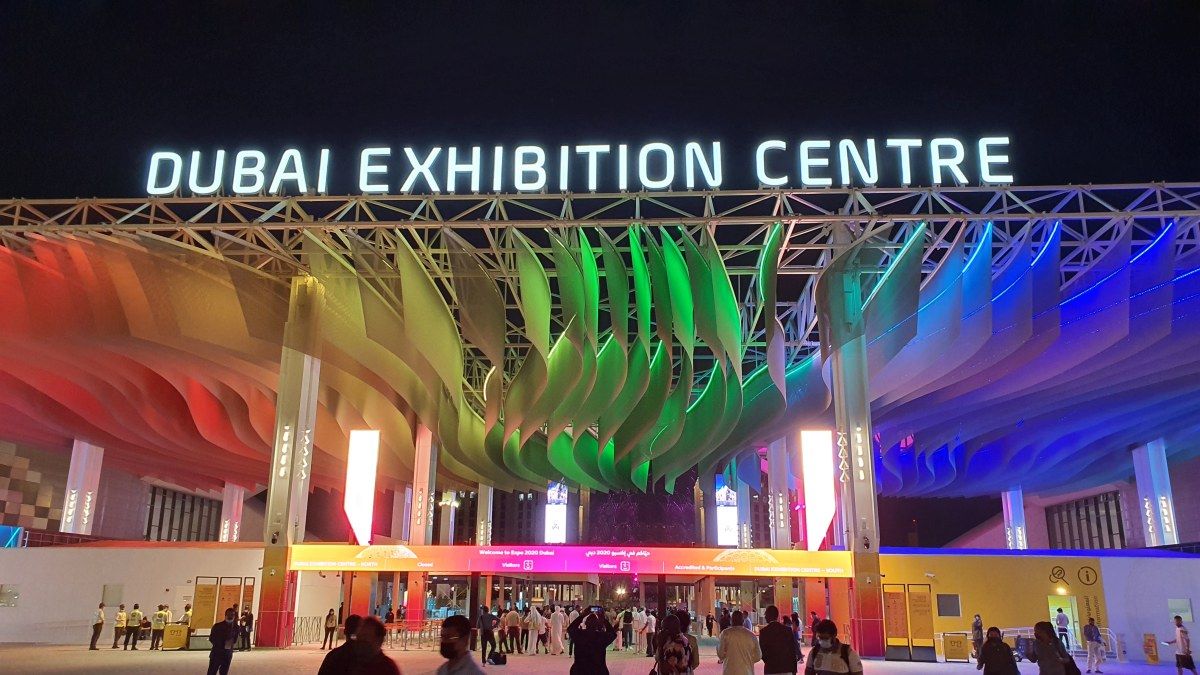 What I didn't realize or hadn't fathomed was the size and grandeur of the place. Yes, it was similar to the Mumbai Expo in the sense that there were different tents/buildings called pavilions, but each pavilion was promoting the culture and heritage of a country! There are in all 200 pavilions out of which 191 belong to the different countries of the world! And that's why they say, you can "Visit the world in one place" if you visit the Dubai Expo 2020.

A natural question on anyone's mind could be. We are coming towards the end of 2021, why is this expo still called the "Dubai Expo 2020"? The World Expo is held every five years. The last one was held in Milan, Italy in 2015, prior to that it was in China in 2010. In order to keep the continuity and the gap of five years, the Dubai Expo decided not to change its name.

More about the Dubai Expo 2020

Originally scheduled for 20 October 2020 to 10 April 2021, it was postponed due to the COVID-19 pandemic. Despite being postponed, organizers kept the name Expo 2020 for marketing and branding purposes. The Bureau International des Expositions (BIE) general assembly in Paris named Dubai as the host on 27 November 2013. The main site of Expo 2020 Dubai is a 438-hectare area (1083 acres) located between the cities of Dubai and Abu Dhabi, near Dubai's southern border with Abu Dhabi. The theme of the Expo is "Connecting Minds, Creating the Future" with the sub-themes of Sustainability, Mobility and Opportunity

Al Wasl Plaza is the heart of Expo 2020 Dubai is a visual marvel for the visitor for its striking scale; it's got a 130-metre-wide, 67.5-metre-tall dome that doubles as a 360-degree laser projection surface, making it the largest of its kind. Two-hundred-and-fifty-two laser projectors work to splash images onto the surface of Al Wasl Plaza dome. What’s more is that these laser shows can be viewed from within the dome as well as from outside. Dubai used to go by the historical name of Al Wasl, which means ‘connection’ in Arabic. You can know more about the Al Wasl Plaza from this fine article written on Gulfnews. 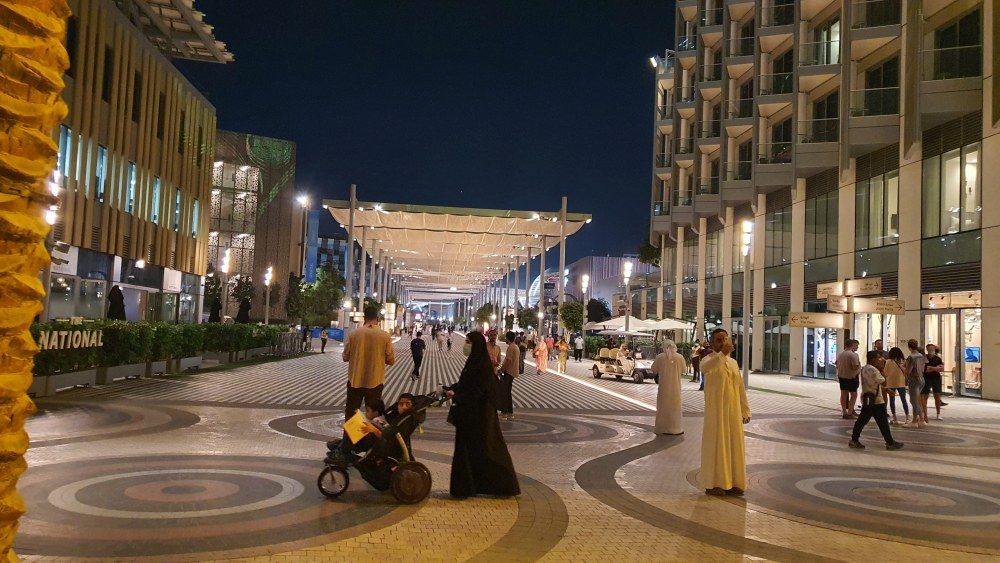 Excellent use of lights and music gives you a bright feeling when walking in the Expo. \ Photo: Amruta Mokal 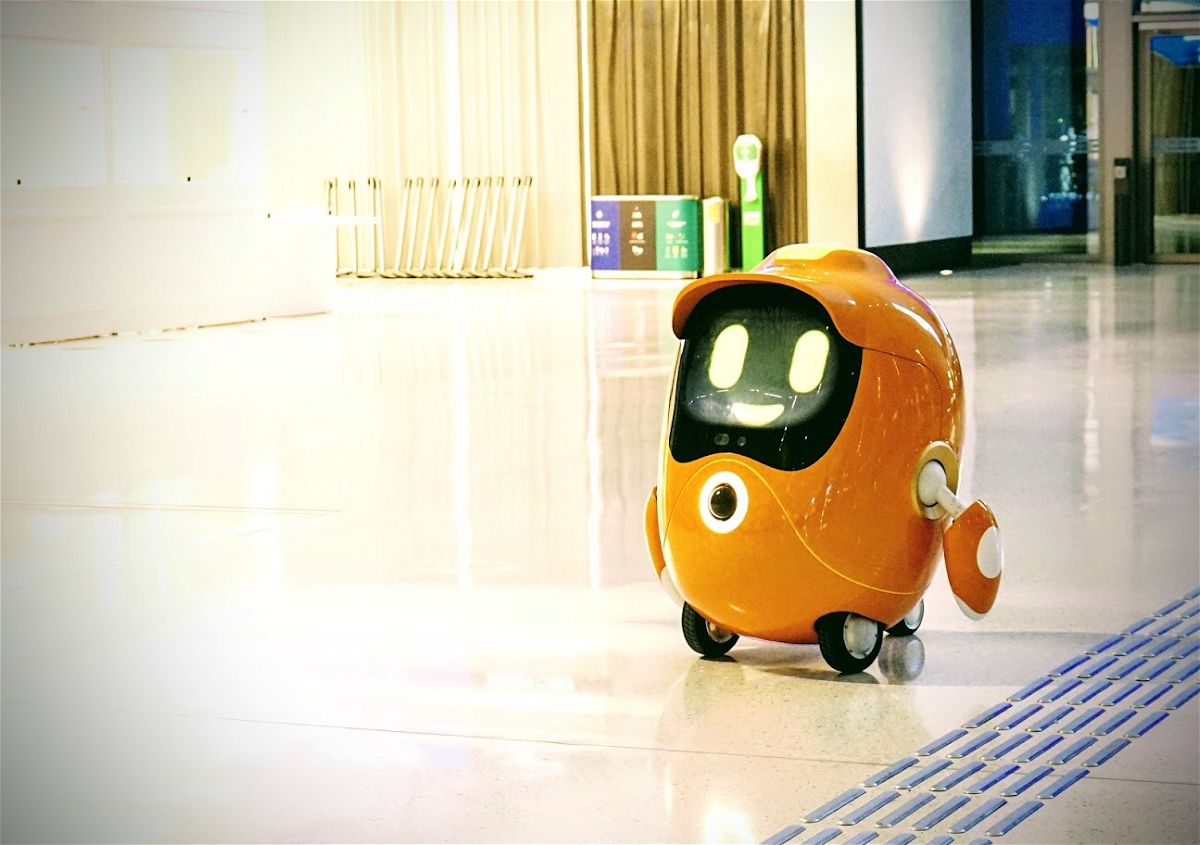 Sometimes you could even bump into the robots who would ask you to wear your mask. There are six mascots of the Expo. The one in the picture above is called Opti. | Photo: Amruta Mokal 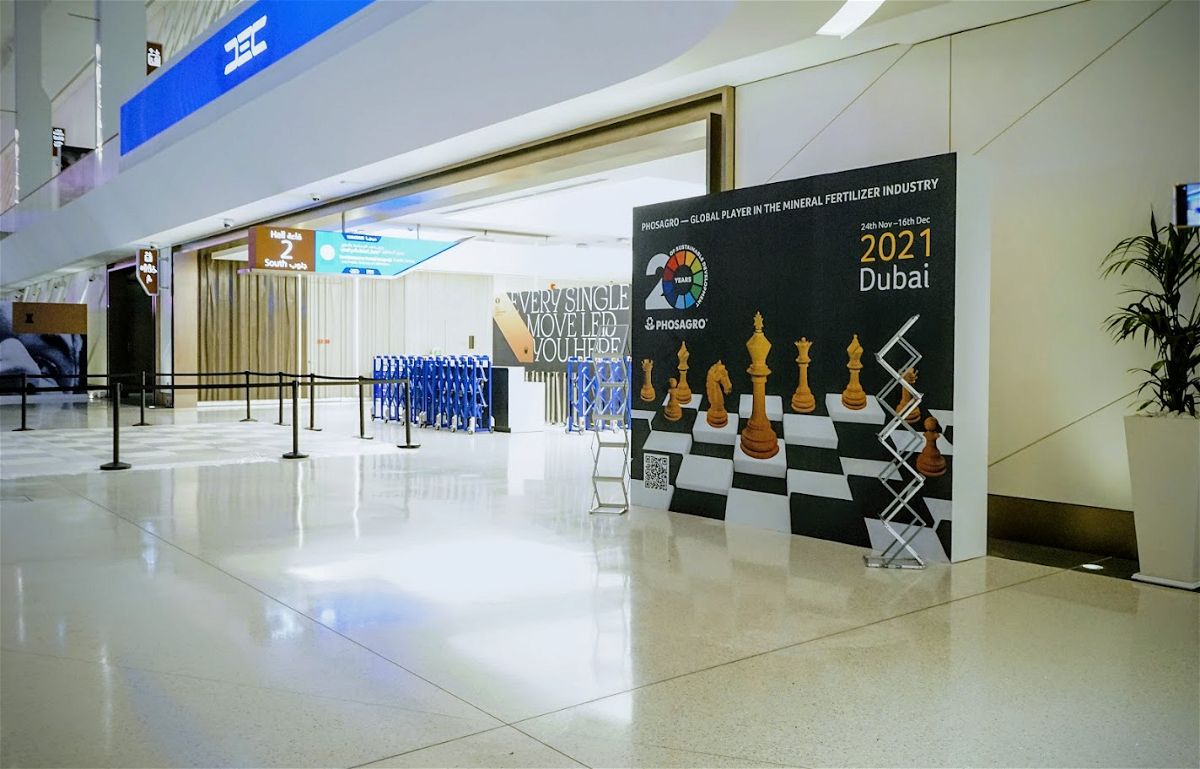 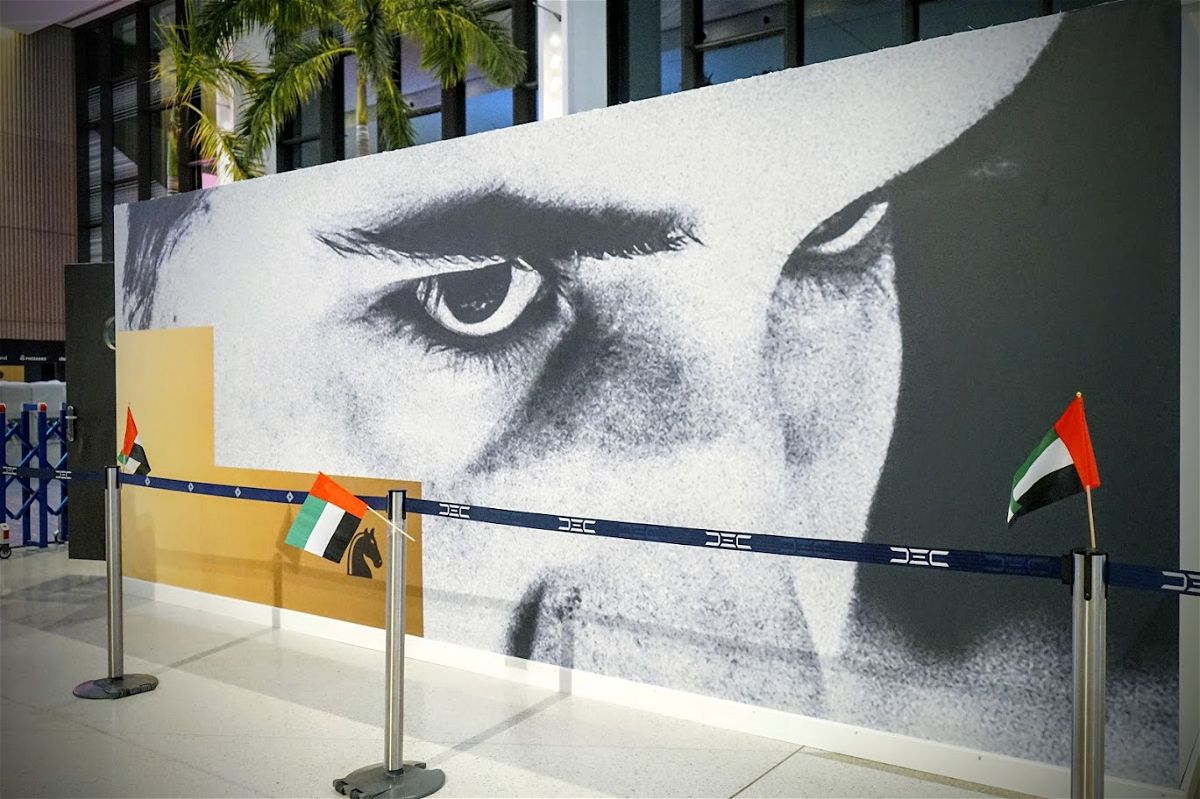 The Nepo banner! | Photo: Amruta Mokal
The VIP room is getting ready!
And so is the Press room!

Magnus and Nepo were to be seated next to each other! | Photo: Eric Rosen 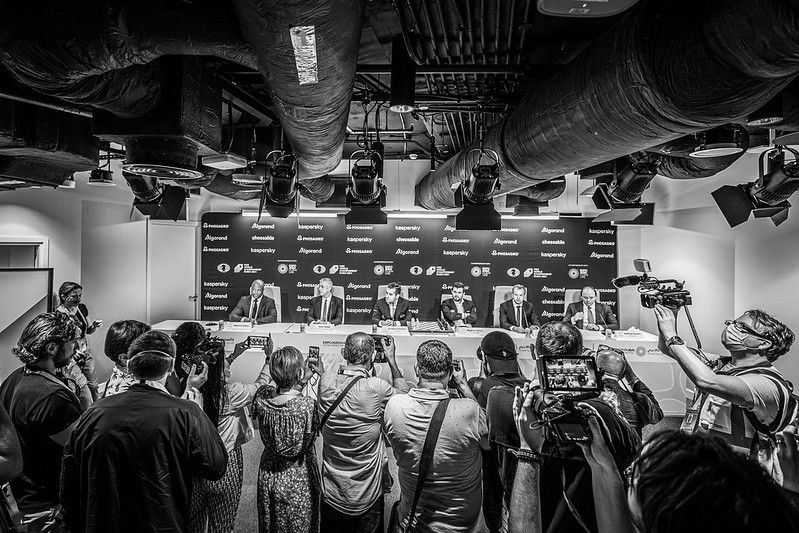 Ian Nepomniachtchi was excited and mentioned, "I can't wait to actually get started". Magnus was more laidback, "I'm going to feel better in a couple days." In an interview to the Guardian, Carlsen was extremely honest and said, "Right now, I don’t really feel it. I feel like I’ve been here, done it before. And it doesn’t excite me, to be honest. But I think when I sit down on Friday, it will feel very different. And I’m very, very much looking forward to that.” Magnus Carlsen became the World Champion in November 2013 and has managed to hold onto the crown for eight years now. 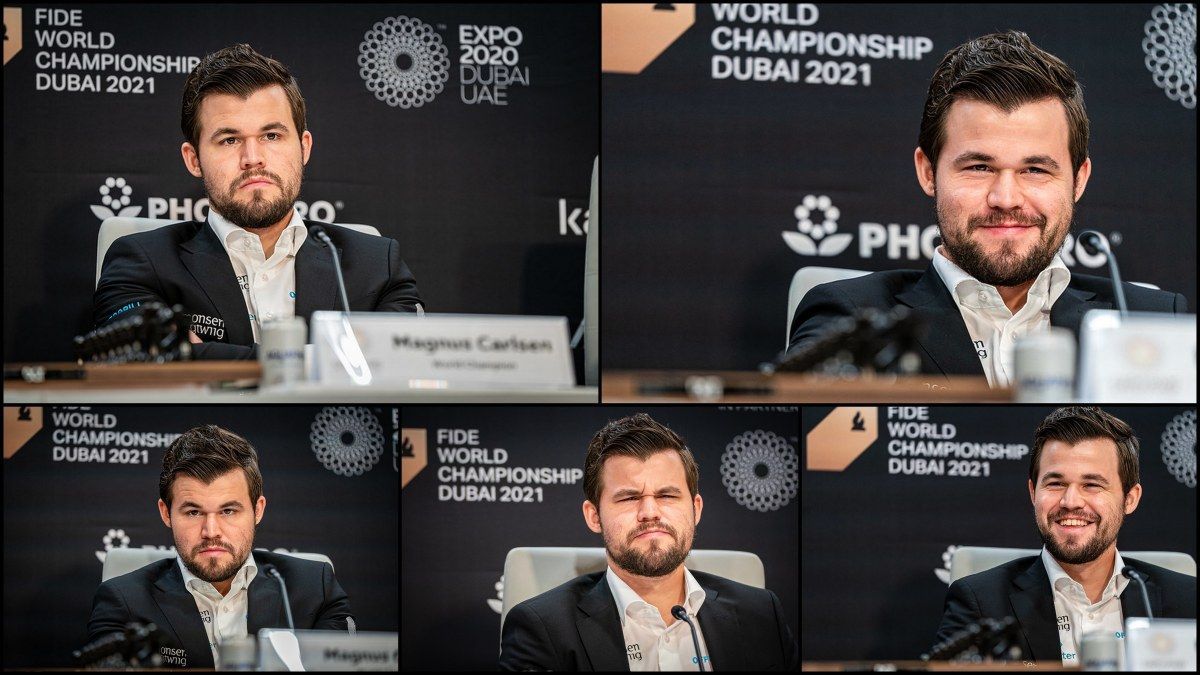 Will Magnus Carlsen be up to the challenge? Or will he lack the motivation considering that this is his 5th World Championship Match | Photo: Eric Rosen

Nepomniachtchi was asked the reason why he would win the match. The Russian GM put it in a straightforward manner, "Normally, I think the best player wins!" 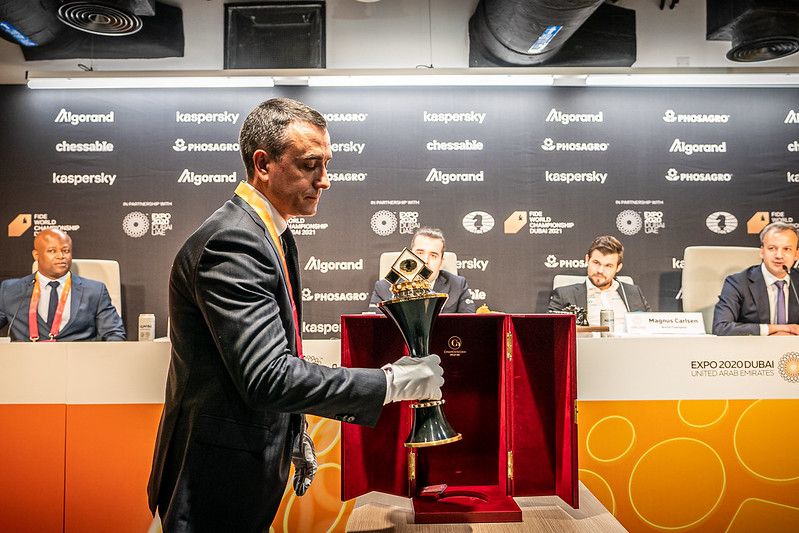 The winner's trophy was unveiled at the Press Conference | Photo: Eric Rosen

The FIDE World Championship Cup Dubai 2021 is made of 925 sterling silver with 999 gold plating, dolerite, and obsidian. The item is set with 39 pearls and a diamond. The trophy weighs more than 5 kgs. The design of the cup was provided by FIDE President Arkady Dvorkovich. The cup was created by masters of the Chamovskikh Jewellery House with the support of the Sverdlovsk Region Chess Federation represented by its president Andrey Simanovsky, owner of SIMA-LAND company. 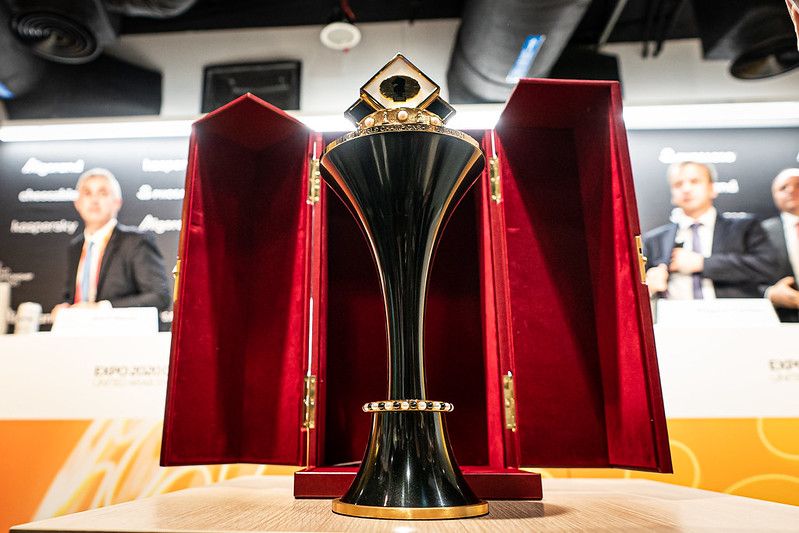 What a beautiful piece of art work | Photo: Eric Rosen

When Carlsen and Nepomniachtchi were asked to pose with the trophy, Carlsen refused it saying that it would be highly inappropriate.

The host of the press conference was the well-known American GM and commentator Maurice Ashley | Photo: Eric Rosen

The Chateau team designed the special Art Russe chess gift case in 2014 as a tribute to the ancient intellectual game, bringing together the arts of chess, painting and winemaking.  Complete with a set of chess pieces handmade to an individual design, the elegant wooden box with a chessboard lid contains 6 bottles of famous Saint-Emilion wine with Russian art on the labels. The case is made from top quality natural materials such as wood, valchromat and leather.  The man behind the idea of the case is the owner of Chateau La Grace Dieu des Prieurs, President of the Russian Chess Federation Andrei Filatov. Both Carlsen and Nepo will be gifted this special artwork.

The opening ceremony took place at the Dubai Opera on 24th of November at 8 p.m. The event was attended by the players, sponsors and dignitaries. 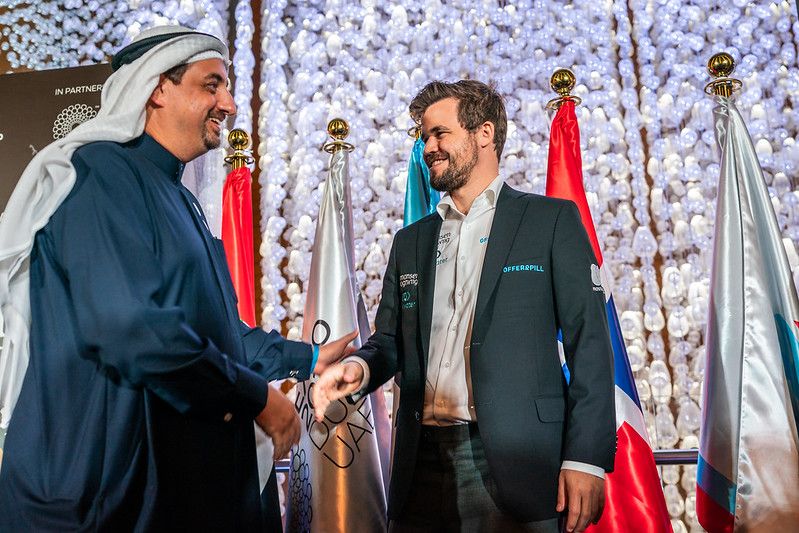 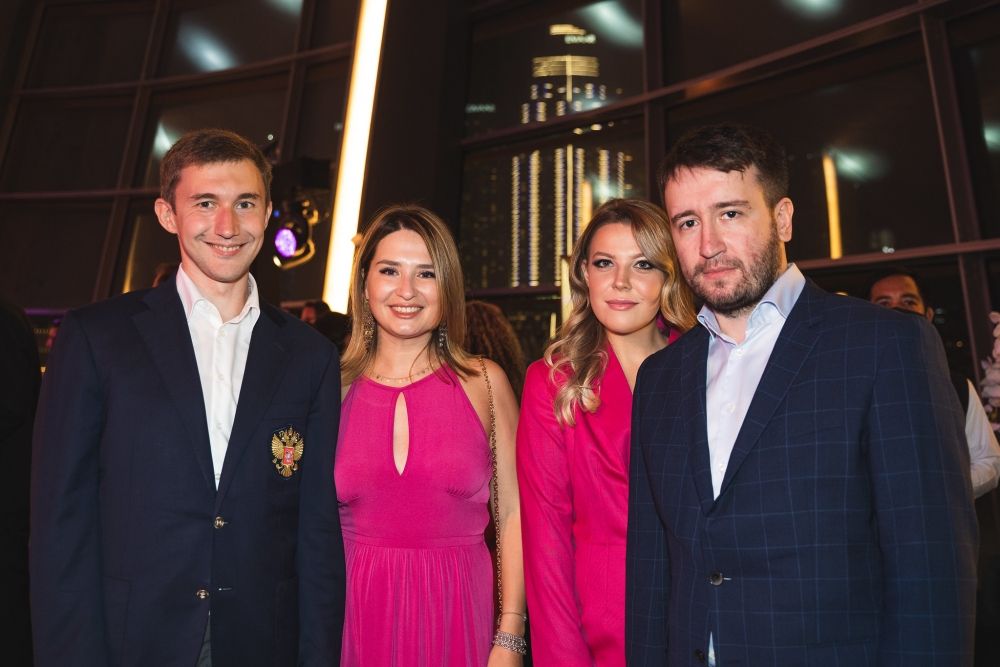 Karjakin with his wife Galiya and Teimour with his fiance Anya Maksakova. It has not been determined whether Teimour is helping Ian in the match or not. Perhaps he is, or perhaps he is in Dubai as a guest.
Well-known chess photographer Niki Riga with a chess set that has different structures in the UAE as the pieces! | Photo: Eric Rosen

Road from Mumbai to Dubai

Starting from 2016 when ChessBase India began, Amruta and I have travelled to all the major events in the world of chess - World Cups, Olympiads, Candidates, Super Tournaments, World Rapid and Blitz etc. If there was one event which we hadn't covered in person, it was the World Championship Match. In 2016, it was too far away in the US and in 2018 we couldn't make it to London. The fact that Dubai is just 4 hours away from India made us excited at the prospect of being on the ground and watching this grand spectacle unfold in front of our eyes! But our way to Dubai was far from easy. We landed back in Mumbai from the Tata Steel Chess India in Kolkata on the 23rd of November early morning. We did our RTPCR test - this one was the 48 hour mandatory test. We got our reports on 23rd afternoon and that's when we realized we also have to do a Rapid RTPCR test, which is 6 hours before the flight! We had booked a flight from Mumbai to Dubai at 7.30 a.m. We had to travel to the airport at 1.30 a.m. on 24th of November! 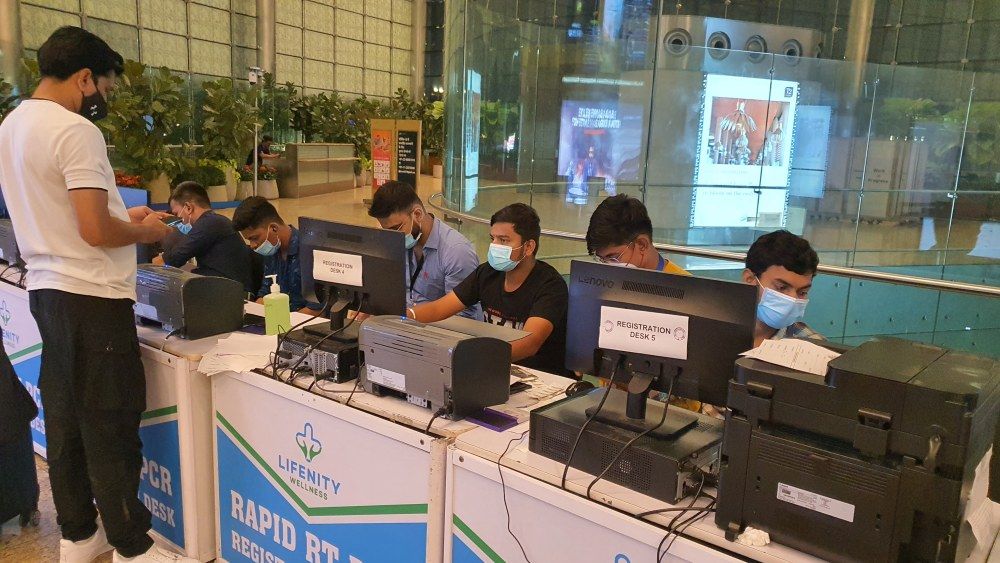 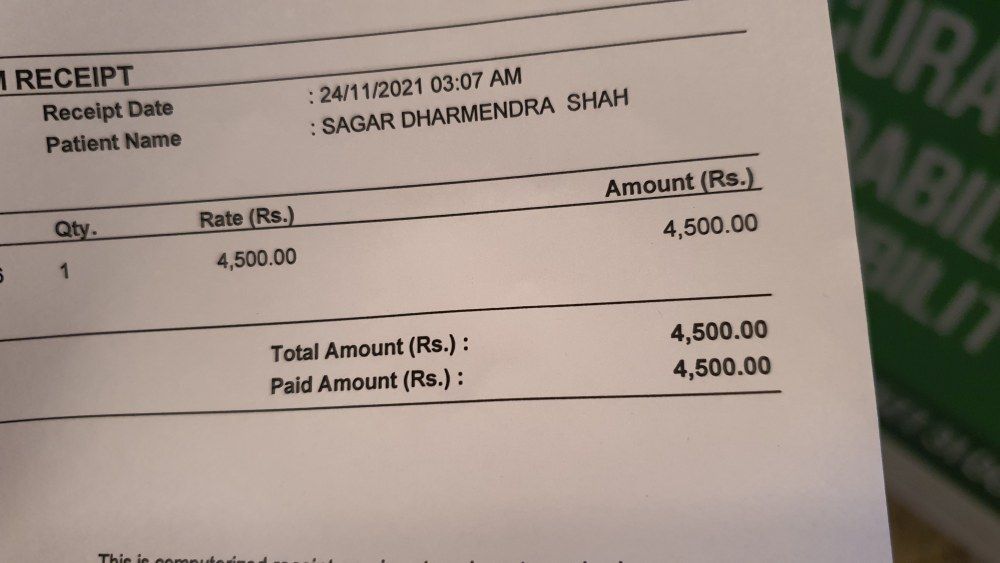 Usually it costs you Rs.600-800 to do a RTPCR test, the rapid one cost us Rs.4,500 per head! The only positive thing about this test is that when you land in Dubai, you need to show this document to the authorities and so it's quite important! 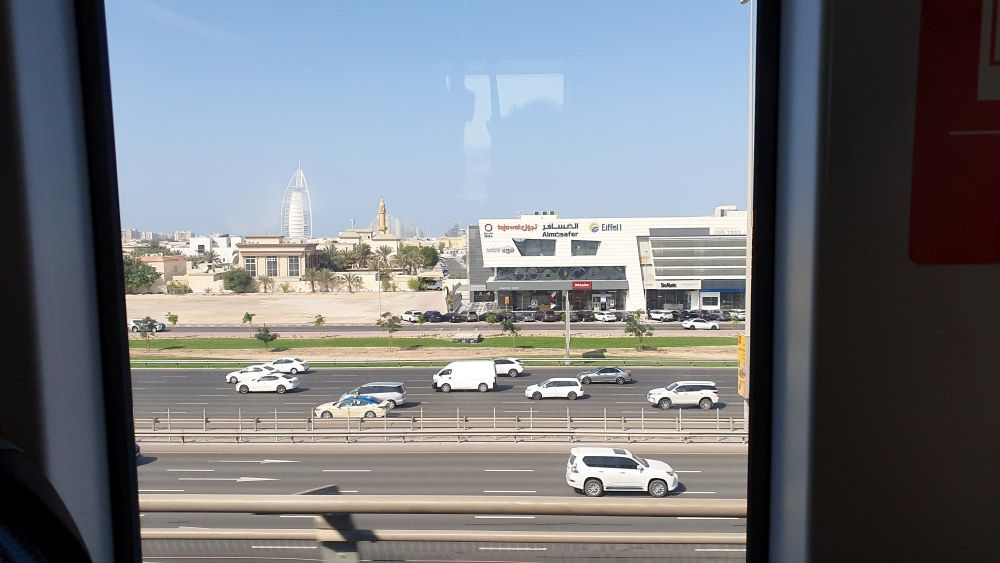 Travelling in the metro from the airport to our hotel 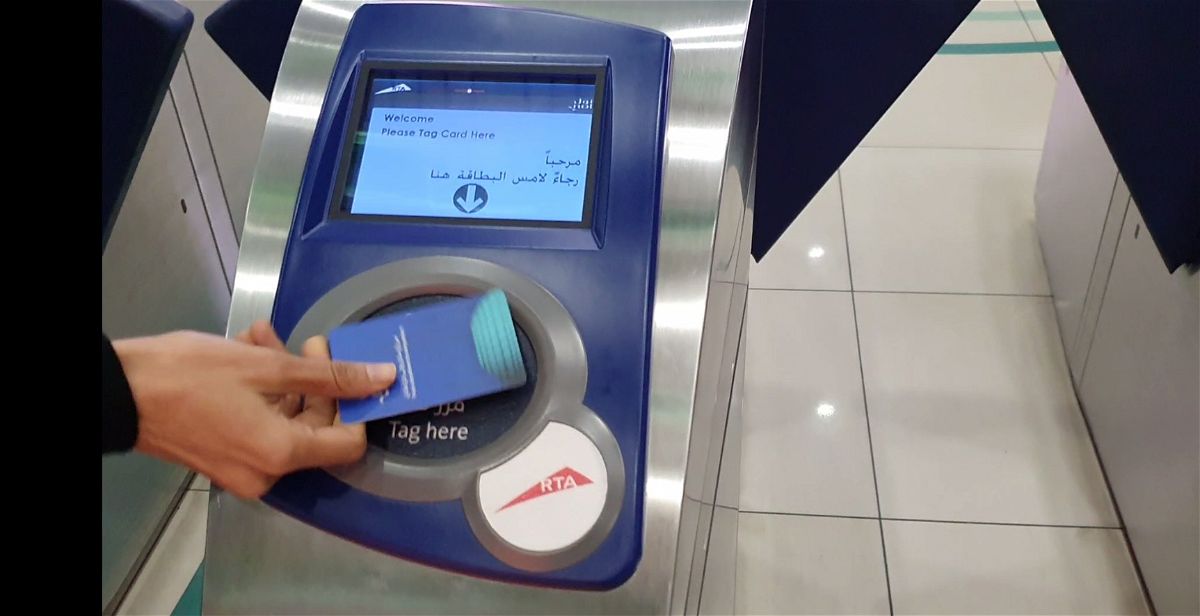 We decided to invest in a weekly travel card as that gave us a lot of flexibility. It cost us AED 110. 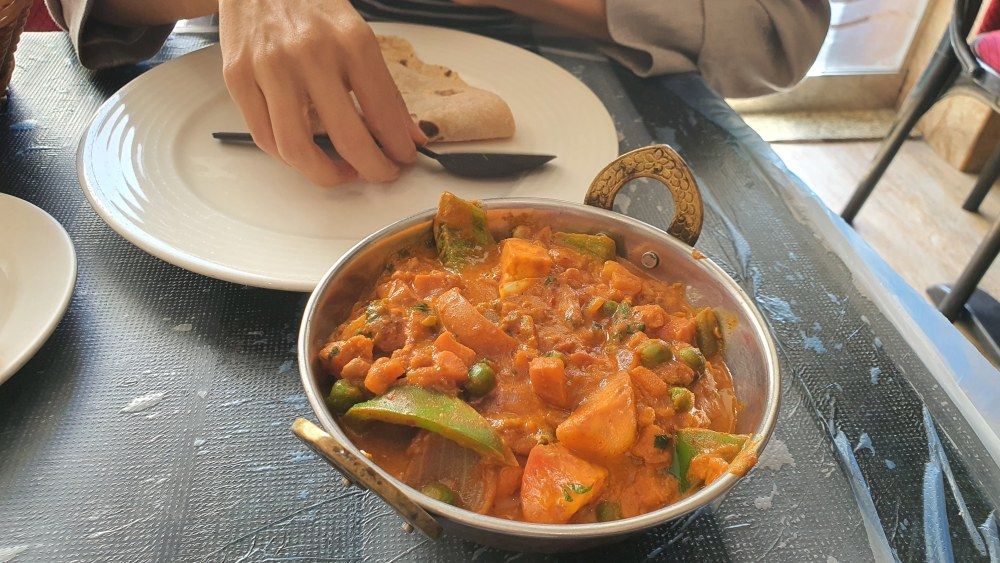 There is a wonderful Indian restaurant next to the place where we stay. Nothing like have hot Mixed veg. paneer after a long travel. 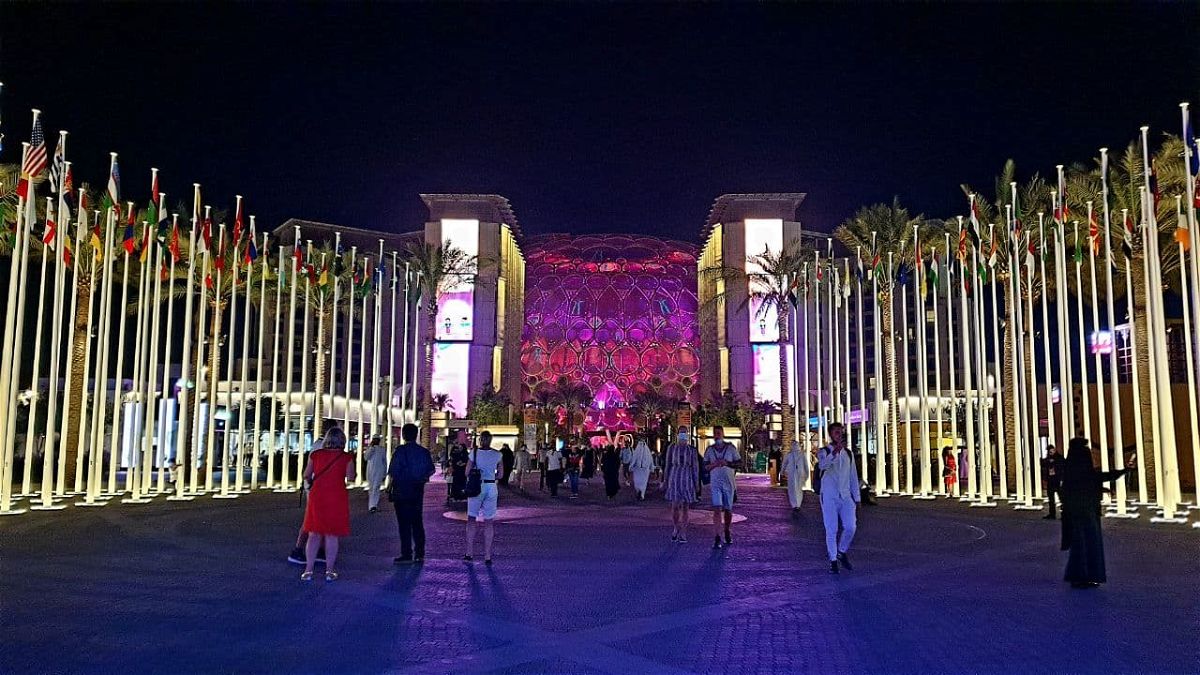 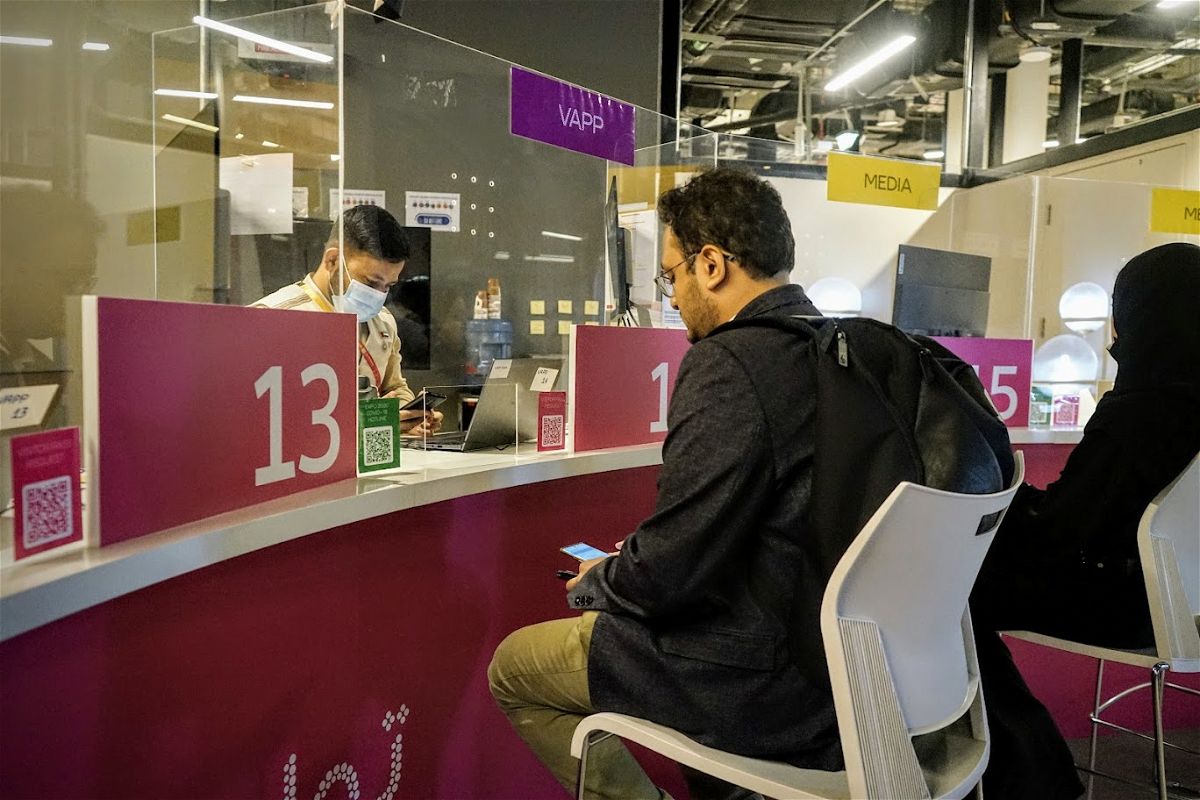 We had applied for the Media Accreditation via a website for the Expo. You don't just need the accreditation from FIDE, but also from the Dubai Expo. The process of application was quite tedious, but once the accreditation was confirmed, collecting it from the Expo was very convenient. All that we had to do was show our passport and vaccination certificate and they handed our cards to us! 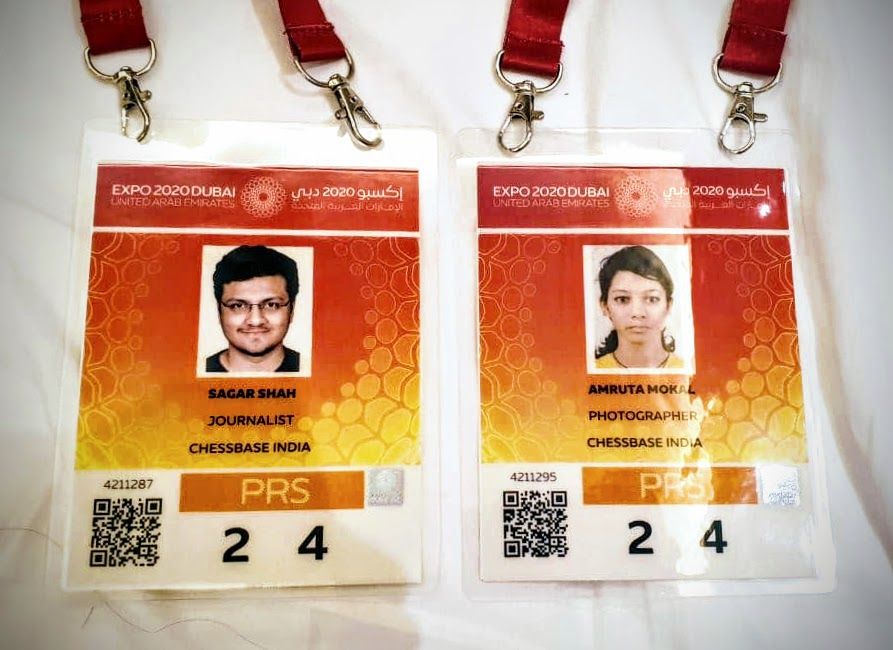 These media accreditation passes help us to enter the expo without an entry fee and also give us access to many of the places which are off bound for tourists. Also the cover the of these cards have a special hologram on them which avoids the replication of such cards! The security at the event is top-notch.
Behind the scenes, work in progress!

The first game will begin at 16.30 hours local time on 26th of November 2021. That is 18.00 hours IST. We, at ChessBase India, will bring you all the updates from the venue. It will be a different type of coverage which will most likely not involve live commentary But will keep you loaded with quick updates from the venue. It will be an in-depth coverage with many videos, articles, livestreams and more. So stayed tuned with us!

You can subscribe to the Newsletter to get daily updates 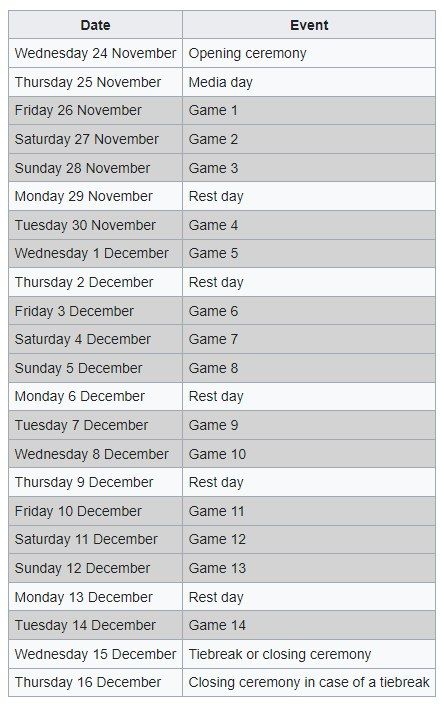 Each Day the games will being at 6 p.m. IST

All the details about the match