With just two rounds to go, Italian American GM Fabiano Caruana has taken sole lead after the seventh round of the Grenke Chess Classic. In his round-7 game, Caruana defeated co-leader Maxime Vachier-Lagrave to take a half point lead over the rest of the field. In another decisive game of the round, Magnus Carlsen defeated Arkadij Naiditsch to retain his second spot. Vishy Anand came close to both victory and defeat in round 7. While his enterprising exchange sacrifice against Meier gave him good chances to win, a slip in the follow-up brought him on the brink of defeat. But Meier, too, failed to find the best continuation and peace was signed. Round 7 report.

The seventh round of the Grenke Chess Classic finally gave the tournament a clear leader as Fabiano Caruana defeated his co-leader Maxime Vachier-Lagrave. Nikita Vitiugov, who was also leading with Caruana and MVL until the last round, continued his draw streak and slipped to the second spot. Another important result of the round came from the game between Arkadij Naiditsch and world champion Magnus Carlsen wherein the latter scored a fine win to retain second place. Vishy Anand, who is yet to register his first win in Baden-Baden made serious attempts to win against Georg Meier. This almost backfired for the former five time world champion as he ended up in an inferior position. But Meier failed to exploit this and the game ended in a draw. 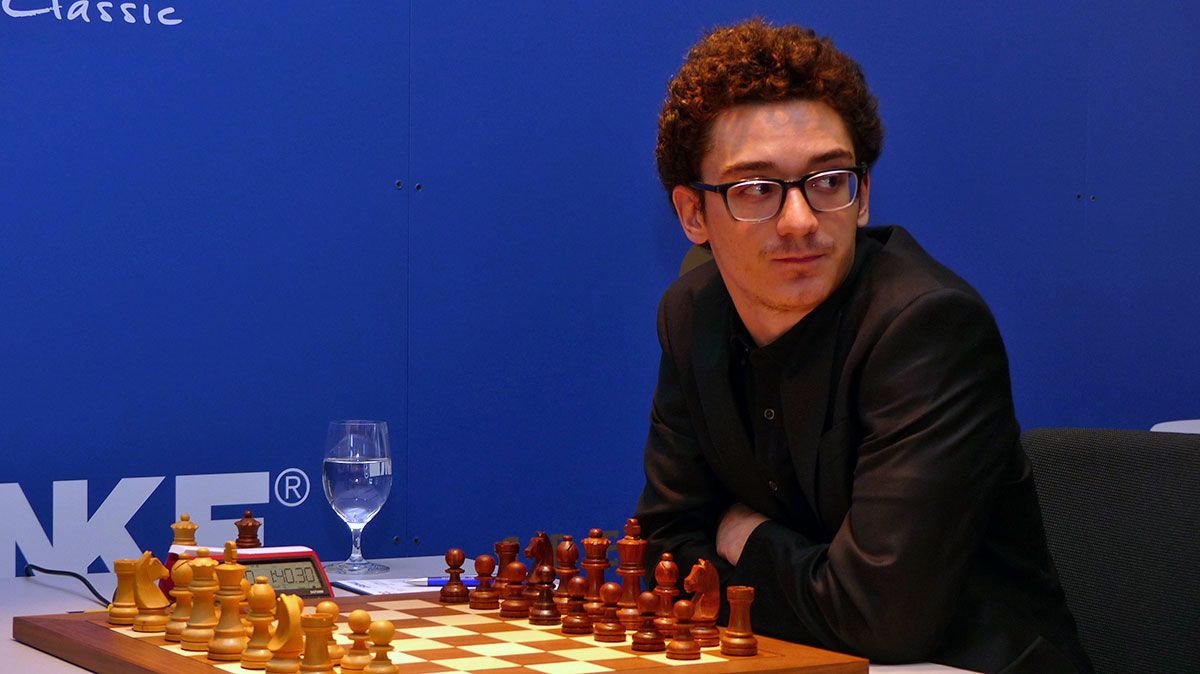 Maxime Vachier-Lagrave went for an old variation of the Four Knights English in his seventh round game against co-leader, Fabiano Caruana. But soon, it began to appear as though the Frenchman was not very comfortable with his opening choice. Vachier-Lagrave tried to avoid mainline theory but ended up in an inferior position nonetheless. The bout between the two co-leaders ended in favour of GM Fabiano Caruana | Photo: Georgios Souleidis

“He (Maxime Vachier-Lagrave) was very unfamiliar with the position, I guess,” said the newly appointed world championship challenger in his post-game interview. As play progressed, Vachier Lagrave found his pieces pushed into passivity. Meanwhile, Caruana also won a couple of pawns and by the 36th move, Vachier-Lagrave decided to throw in the towel. 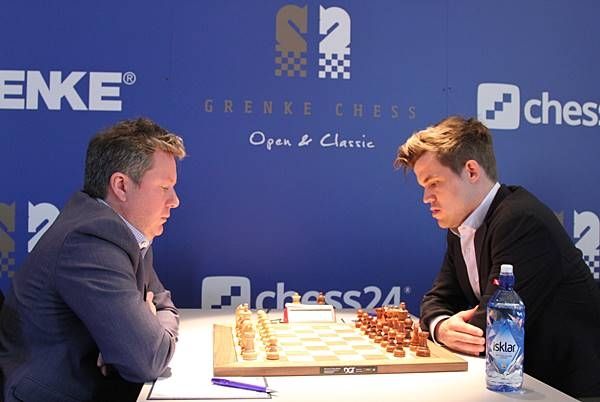 Another important win of the day was scored by Magnus Carlsen who had been chasing the leaders since quite a few rounds. Unfortunately, even after this win, Carlsen will remain in second place as Caruana took sole lead winning his game. Playing with the black pieces against Arkadij Naiditsch, Carlsen played ambitiously and went for the Najdorf variation of the Sicilian. Out of the opening, Carlsen already felt that he had a better position. Soon afterwards, though, the world champion began making mistakes and let his opponent come back into the game. But Naiditsch too made his share of mistakes and eventually the world champ was able to turn the tables in his favour. 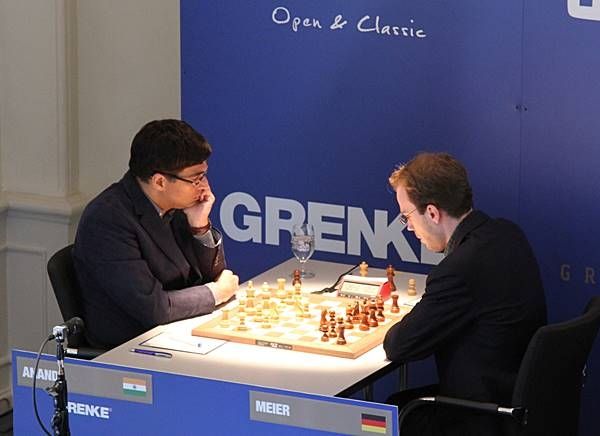 Vishy Anand is another player who needs a win desperately. Not because he would catch up for one of the top spots or anything. It is simply because his performance at the tournament has been dismal so far and he is still to win a game in Grenke. In his game against Georg Meier, Anand seemed to be appreciating that he needs to win and took high risks to bag a full point. Playing from the white side of the exchange variation of the French Defence, Anand ended up in an equal looking position out of the opening. Queens were exchanged quite early in the game and an endgame was reached before move 20. But Anand was in no mood to sue for peace without a fight. On his 29th turn, Anand found an enterprising way to create chances in the position by sacrificing an exchange.

Talking about his exchange sacrifice, Anand said after the game that he felt this was a “very serious winning chance”.

In the follow up, however, Anand faltered by allowing Meier’s rook an entry into his position on his 33rd move and was almost on the brink of losing. But luckily for the Indian Maestro, his German opponent failed to find the most critical line and allowed him to get away with a draw. 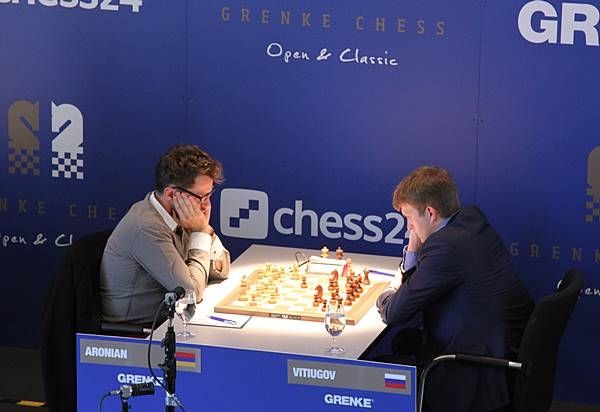 Vitiugov had no problems holding Aronian to a draw | Photo: Georgios Souleidis

Nikita Vitiugov, who was among the tournament leaders at the start of the antepenultimate round, had the black pieces against Levon Aronian. Despite not being as highly rated as some of the other stars of the tournament, this Russian GM was never in any trouble in any of his games so far. His game against Aronian too was no exception. Playing from the black side of an English Opening, Vitiugov had no problems equalizing. For the most part, play revolved around white’s d4 pawn. Once Aronian succeeded in exchanging it, a mass trade of pieces occurred which left players with a rook and four pawns each. Just five moves after this, a draw was agreed. 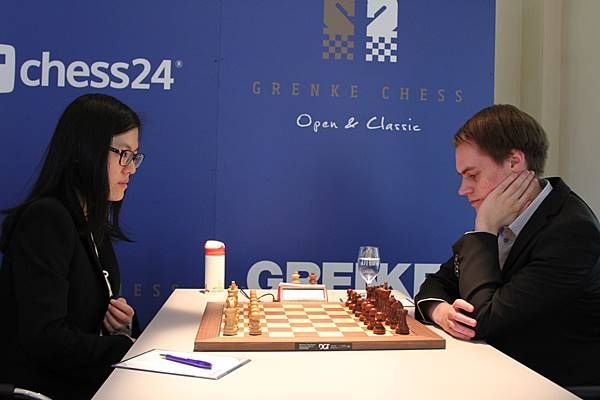 Having beaten Anand in the previous round, Bluebaum played another well controlled game in the seventh round. From the black side of an English Opening, he did not have many problems defending his isolated queen’s pawn position against Hou. The two signed peace after 46 moves.

With two rounds to go, Fabiano Caruana has taken sole lead winning his game against Maxime Vachier-Lagrave. If he is able to win this tournament as well, this will be a big boost to his confidence not only because he would have finished ahead of Carlsen but also because this would be his second big tournament victory, just a few days after his win at the World Championship Candidates. However, Carlsen and Vitiugov are half a point behind and have a good chance of catching up.