Round 6 of the Grenke Chess Classic brought an unfortunate defeat for the former five-time world champion, Viswanathan Anand. Playing against Matthias Bluebaum, Anand played some strange moves in the opening and then again miscalculated in the middlegame to give away the full point to his German opponent. The only other decisive game of the round also ended because of a blunder. Georg Meier, who was playing against Arkadij Naiditsch had been under some pressure all through the game but after the position seemed to have equalised, he threw it all away. All the other games of the round were drawn. Vitiugov, Caruana and MVL still remain the joint leaders. Report with game analysis by WIM Angela Franko Valencia.

After a quiet fifth round, round six of the Grenke Chess Classic witnessed a huge upset. India’s Viswanathan Anand was defeated by German GM Matthias Bluebaum, the lowest rated player in the fray. Bluebaum has had a phenomenal tournament so far. In his previous games, he was able to hold both the world champion and his newly appointed challenger, Magnus Carlsen and Fabiano Caruana. But a win against a former world champion like Anand is certainly a huge result for the young German. While Bluebaum stunned all by defeating Anand, his compatriot Georg Meier shockingly blundered in an equal position and lost instantly. All the other games of the round were drawn leaving Caruana, Vitiugov and Maxime Vachier-Lagrave at the top. 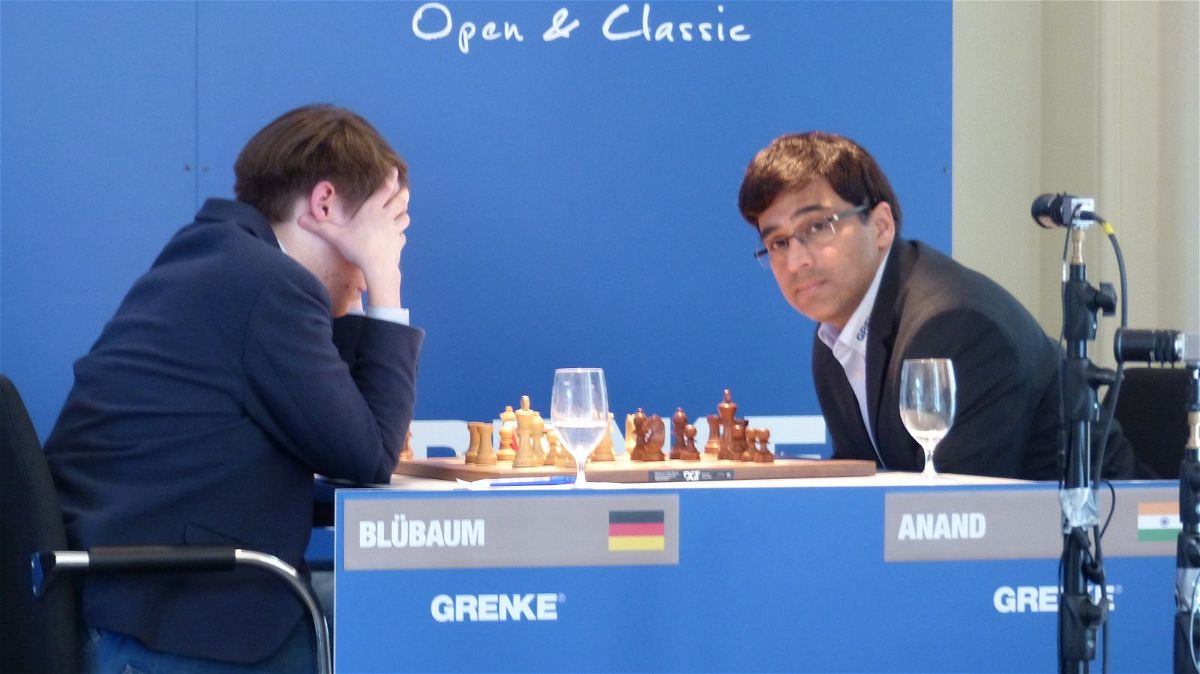 Anand simply did not look like he was in a very good shape in round 6. Play kicked off with a Queen’s Gambit Accepted in which Anand, even though for a short while, tried to cling on to his extra pawn with the black pieces, a strategy which is considered to be suspicious. But despite his little adventure in the opening, Anand was able to come out of the opening with an equal looking position and did not have much to fear.

But then, starting from move 19, Anand’s play was surprisingly strange. After trading queens soon out of the opening, Anand tried to induce more exchanges. On his 19th turn Anand miscalculated and ended up a piece down in the next five moves. He did find a little counterplay with his passed ‘b’ pawn which had had managed to reach the seventh rank but Bluebaum had the position completely under control and went on to win rather easily in the next few moves.

After the game, Bluebaum said that the game was drifting towards the draw out of the opening. “Actually, I thought it was going to be a draw because the position is very balanced and it’s not so easy to do anything. And then he went for 19…Bd5 which is very risky. I guess he just missed something in this line because probably it’s just losing,” Bluebaum said. 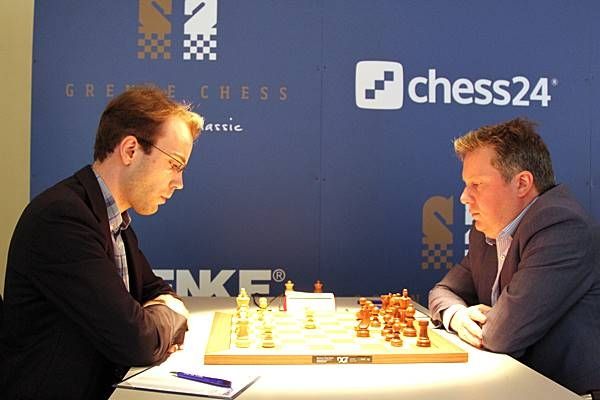 This was not, however, the only game that featured some strange moves. Bluebaum’s countryman, Georg Meier also caught the attention of all with his stunning blunder against Arkadij Naiditsch. The game began with a Bogo Indian Defence. Naiditsch, who had the black pieces, was able to seize an advantage out of the opening as his knight wreaked havoc in the white camp. But soon, it began to look like the worst had passed for Meier. All he had to do was block the dangerous a8-h1 diagonal and he would have been a happy camper. Meier even had several ways of achieving this. But instead, he grabbed a pawn that spelt doom instantaneously. Meier was forced to resign after Naiditsch placed his queen on the crucial diagonal. 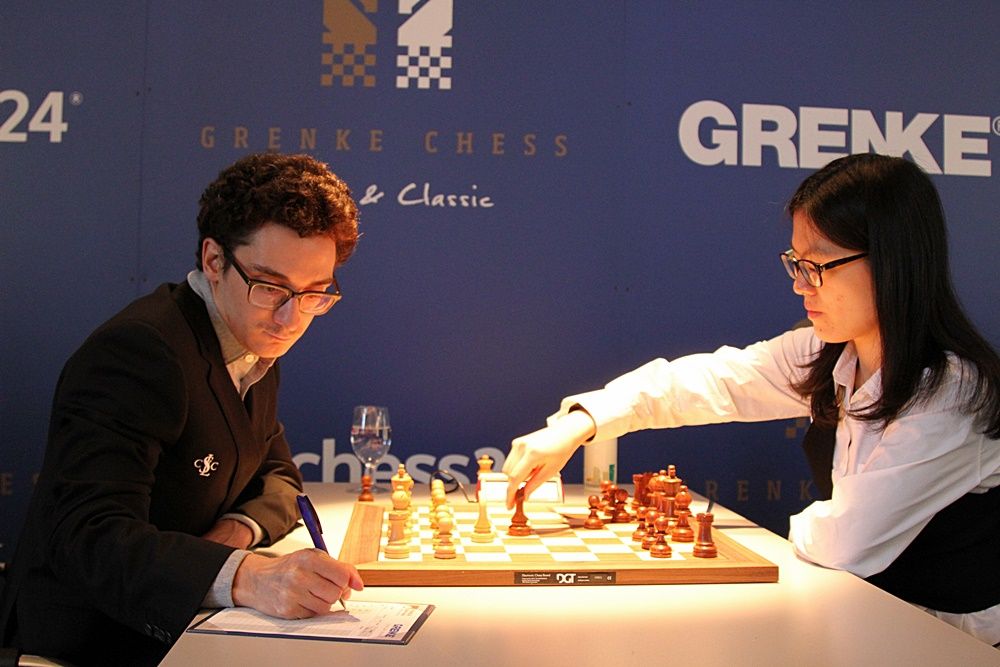 Hou could have beaten Caruana if only she had found a stunning continuation on her 64th turn | Photo: Georgios Souleidis

While Meier missed the opportunity to remain equal, Hou Yifan missed a win in her game against Fabiano Caruana. It must also be mentioned that finding this almost invisible possibility wasn’t easy by any means. With the Black pieces, Hou had essayed the Petroff Defence. Caruana went for the line with opposite winged castles and tried to go for a kingside attack. Hou was well prepared, though, and managed to exchange queens quickly. In the ensuing minor piece endgame, Hou had a slight edge and kept pushing for a win. On her 64th turn, she had a chance force a win but the idea was a very difficult one to spot. She kept trying until the 98th move after this but had to settle for a draw in the end. Another long game was the one between Nikita Vitiugov and... | Photo: Georgios Souleidis

This was an important game from the tournament’s perspective as both Vitiugov and Vachier-Lagrave are among the tournament leaders. MVL, who had the black pieces went for his pet Gruenfeld defence in the game to which Vitiugov responded with the Fianchetto structure. Vachier-Lagrave gave up a pawn early in the game to expedite his development. Vitiugov briefly returned it but regained his extra pawn soon afterwards. Queens were exchanged quite early in the game and the resolving endgame featured a rook and three minor pieces with both sides having a bunch of pawns on the queenside. Vitiugov had an extra pawn in this endgame but since there were enough pieces on the board in addition to the fact that all pawns were on the same side, it was hard for Vitiugov to make anything of his extra pawn. However, despite little hope, Vitiugov kept trying to make something of his tiny advantage and fought until only kings remained on the board. 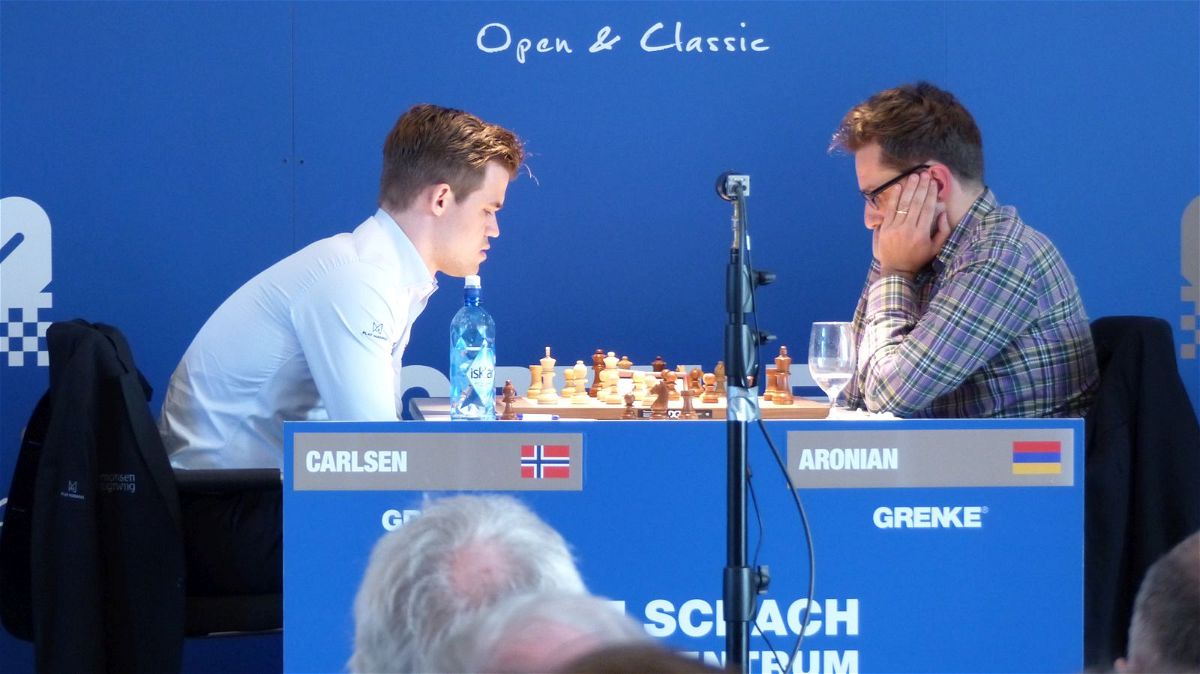 The encounter between world champion Magnus Carlsen and Levon Aronian also ended peacefully. Since both players are only half a point behind the leaders, they’re both on the hunt for a win that will push them to the top spot. However, in this game, both players decided to take thing slow. The game opened with the Mikenas variation of the English Opening in which Aronian was able to cement his bishop deep into Carlsen’s position on the d3 square. Mass exchanges followed in the middle game that followed. Carlsen had an extra pawn in the endgame that arose but he wasn’t really able to make much out of it.

With three rounds to go, Vitiugov, Vachier-Lagrave and Caruana still lead. Carlsen and Aronian remain hot under their heels, just half a point behind. For Anand, with his loss in this round, things are looking bleak. He is now two points behind the leaders and is almost surely out of contention for the title.