Lots for the first round brought about a very welcome matchup for the spectators at the Grenke Chess Classic as world champion Magnus Carlsen was pitted against his challenger-to-be, Fabiano Caruana. Carlsen had the black pieces and came quite close to victory but Caruana found his way to hold ground. In another exciting game of the round, Arkadij Naiditsch had MVL on tightropes in a London System. Vishy Anand also came up with a tricky exchange sacrifice against Hou Yifan but had to settle for a draw in the end. In the only decisive game of the round, Nikita Vitiugov found a brilliant combination to finish off Matthias Bluebaum in merely 25 moves. Round 1 report.

Just a few days after the conclusion of the FIDE World Championship Candidates, the Federal Republic of Germany is playing host to yet another high profile chess event: The Grenke Chess Classic. The event features a nice blend of some of the world’s best players along with some promising talents from within Germany and abroad. While the top seed in this 10-player all-play-all is World Champion and World number one, Magnus Carlsen, the bottommost seed is the 21-year-old German number three, Matthias Bluebaum. India’s frontman at the Classic is the reigning world rapid champion, Viswanathan Anand. Another important player in the fray is Carlsen’s newly selected world championship challenger, GM Fabiano Caruana.

The first three rounds of the Classic will be played in the German southwestern city of Karlsruhe after which the venue will be moved to Kulturhaus in Baden-Baden. Time control for the event is 100 minutes for the first 40 moves followed by another 50 minutes for the next 20 and then another 15 minutes to the rest of the game with a 30-second increment from move 1.

First rounds of such elite events can turn out to be tepid from a spectator’s point of view. The players generally try to get a feel of the field and avoid taking too much risk at the start. The result: a high number of draws. If one were to look only at the results, this seemed to be the case at the Grenke Chess Classic too; four out of the five games of the round were drawn. The results of the round were just an illusion though. All the games were hard fought and were very entertaining. The game that took all the attention, however, was the one between Fabiano Caruana and Magnus Carlsen. As the two are slated to fight for the world championship title later this year, the game served as a nice prelude to the big battle. 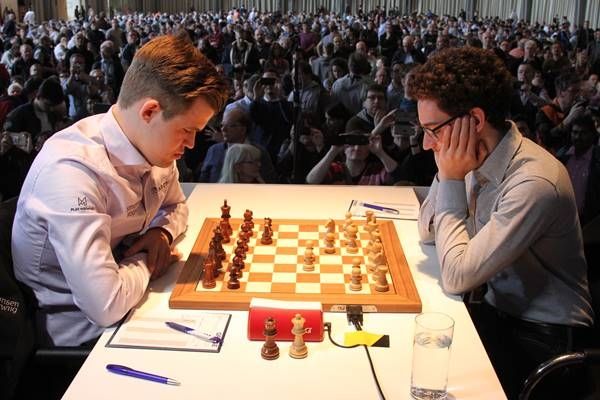 Round 1 served as a nice prelude to the World Championship Match between Caruana and Carlsen scheduled in November this year | Photo: Georgios Souleidis/Grenke Chess Classic

Caruana, who is back at the board just days after his win at the World Championship Candidates, was understandably fatigued and could not have been expected to give his best. Having the white pieces, therefore, must have been a bit of a relief for the Italian-American GM. Nevertheless, as the game began, Caruana’s opening play looked a little suspicious. But despite his slightly flimsy play in the opening, he played enterprisingly going on the offensive on the kingside. Carlsen broke open in the centre and seized counterplay in response and had the better position for the most part of the game.

In the rook and pawn endgame that ensued, the engines screamed a decisive advantage for Carlsen. However, for the reigning world champion, emulating the silicon monster’s precision turned out to be a difficult task to accomplish. and, in the end, had to settle for a draw. Due credit also goes to Caruana for saving a difficult position against someone like Carlsen who specializes in converting minuscule advantages into brilliant victories.

Despite being worn out by the 14 long rounds of the Candidates, Caruana is determined to play well at the event. “I want to play well; winning (the Candidates) doesn't change the fact that I wanna play a good tournament," he said after the game. 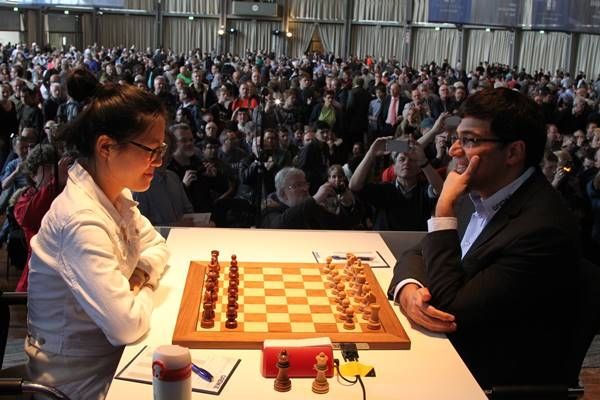 Vishy had the white pieces and some nice tricks up his sleeve for his Chinese opponent in the opening. Demonstrating a concept which is rather incomprehensible for mortals, Anand gave up an exchange and the right to castle for what the elite call “long-term positional compensation”. Stationing his bishop on a powerful central square on d5, Anand began advancing his queenside pawn majority. The position looked quite favourable for the Indian chess legend at some point despite the deficit of an exchange but Hou did well to exchange queens. In the ensuing two rooks versus rook and bishop endgame, both sides found their kings restrained and were thereby unable to make progress. Peace was signed soon afterwards. 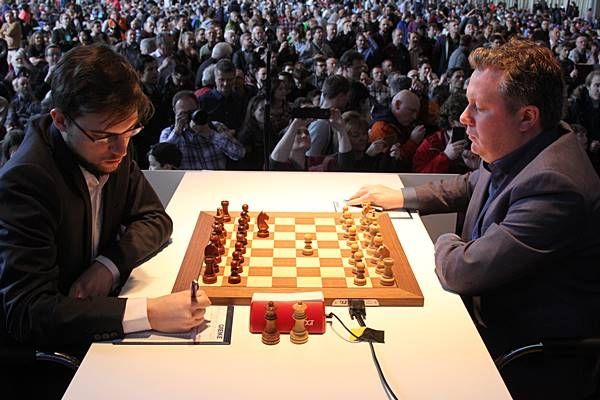 Naiditsch went all guns blazing at MVL from the white side of a London System | Photo: Georgios Souleidis/Grenke Chess Classic

In another fiery game, GM Arkadij Naiditsch had the French number one, GM Maxime Vachier-Lagrave on tightropes out of a London System in which the former had the white pieces. The opening seemed to have gone very badly wrong for Vachier-Lagrave who was forced to give up an exchange eventually to keep some hold over the game. However, as the game progressed, the Frenchman went chose some drawish variations instead of going for sharp lines and managed to hold Naiditsch to a draw. However, after the game, he explained that it would not have been enough had he been playing against a computer. 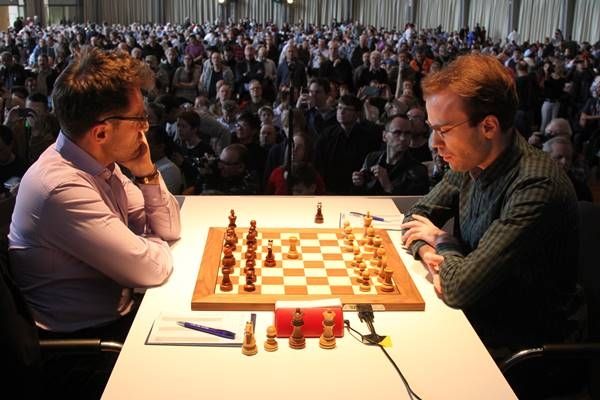 Levon Aronian did not risk too much in his game against Georg Meier | Photo: Georgios Souleidis/Grenke Chess Classic

The defending champion, Levon Aronian hasn’t come to Karlsruhe in a very good shape. He had a nightmare of a tournament at the Candidates where he finished at the bottom of the leaderboard. It, therefore, explained his choice for going for a tepid line in the Berlin Defence against German GM Georg Meier and sign the truce. After the game, when asked if he enjoyed his game, the Armenian GM said, “Okay, it was… I won’t say a very dry game because we had some ideas but mildly enjoyable, not totally.” 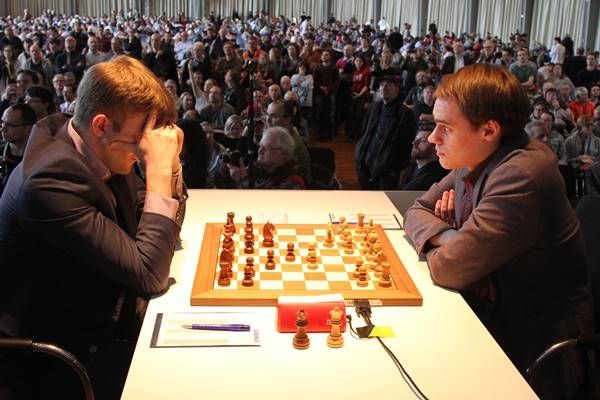 The only decisive game of the round, Matthias Bluebaum versus Nikita Vitiugov, featured a classic case of crime and punishment. Bluebaum, who had the white pieces went all out on the queenside and gobbled a few too many poisoned pawns. On his 24th move, Bluebaum went for another pawn grab with his queen and this turned out to be fatal. Vitiugov, in response, lashed out with a brilliant combination that finished the game on the spot. 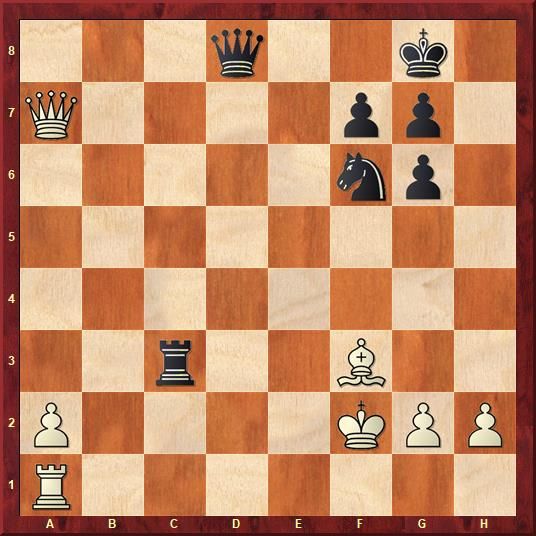 White has just captured with his queen on a7. It took Vitiugov approximately 22 minutes to find the brilliant combination that follows. Can you spot it faster?

With this win, Vitiugov has made himself the sole leader after the first round, half a point ahead of Carlsen, Caruana, Naiditsch, Vachier-Lagrave, Hou Yifan and Viswanathan Anand. It will be interesting to see if he could hold on to this early lead in the tournament.