Round three of the Grenke Chess Classic was the last round to be played in the current tournament venue in Karlsruhe. But before the tournament moved to its new venue in Baden Baden, there was an important change at the top of the leaderboard: Maxime Vachier-Lagrave joined Nikita Vitiugov as the tournament leader by beating Hou Yifan. Vitiugov in the meantime was held to a draw by Naiditsch. In another exciting game, Fabiano Caruana annihilated Georg Meier's king with a monstrous kingside attack. Magnus Carlsen also tried hard to win but Matthias Bluebaum defended stubbornly and allowed the world champion no chance. An illustrated report.

Round 3: A new co-leader emerges

There were some important changes on the leaderboard at the conclusion of the third round of the Grenke Chess Classic. Russian GM Nikita Vitiugov, who had been leading the tournament by a half-point margin so far, was joined by GM Maxime Vachier-Lagrave in the first place. After two back to back wins, Vitiugov slowed down by drawing against GM Arkadij Naiditsch while Vachier-Lagrave won his second consecutive game in round 3 defeating women’s world number one, GM Hou Yifan. As for the only Indian in the fray, Vishy Anand, after his loss in the previous round, went for a solid but tepid draw against GM Levon Aronian of Armenia.

In the game that changed the number of tournament leaders from one to two, Maxime Vachier-Lagrave hardly had an advantage against Hou Yifan for a large part of the game. The Frenchman had the black pieces in a Symmetrical English and chose the hedgehog setup. The game followed the same moves as Vachier-Lagrave’s game against Aronian from the Leuven rapids last year. Since Aronian had won the game with the white pieces, Yifan saw no reason to no repeat Aronian’s moves from the game. Vachier-Lagrave was ready with an improvement but his novelty hardly gave him an edge. The position looked more or less equal and it was rather Hou who was pressing for the most part. “I thought I was out of problems but she turned out to pose more and more,” Vachier-Lagrave said after the game.

Despite all the problems posed by his opponent, the French number one managed to keep things under control and as play neared the first time control, Hou found herself short of time. On her 33rd turn, she blundered away a simple double attack that more or less finished the game on the spot. To conclude things, Vachier-Lagrave exchanged queens and was about to win a second pawn in the knight endgame when Hou resigned. 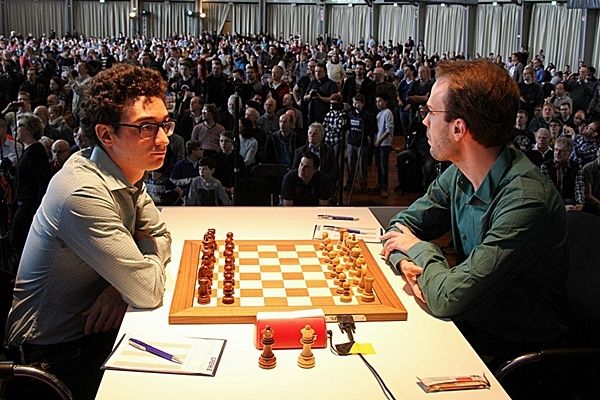 The second decisive game of the round was also won by the black player. This was the game between local GM Georg Meier and Fabiano Caruana. Just like in the previous round, Caruana went all out for an attack quite early in the game. Despite essaying the innocuous Exchange Variation of the Ruy Lopez, Caruana, with his g5 pawn advance in combination with 11…Rg8, affirmed it loud and clear that this was not going to be a peaceful day. Continuing energetically, Caruana did not even bother castling and before the 20th move, he was close to winning. However, this is when he began to miss chances. Before finally finishing off by catching the white king in a mating net, Caruana had missed several wins.

“This was incredibly careless. I was not happy that I made it so messy,” he said after the game. 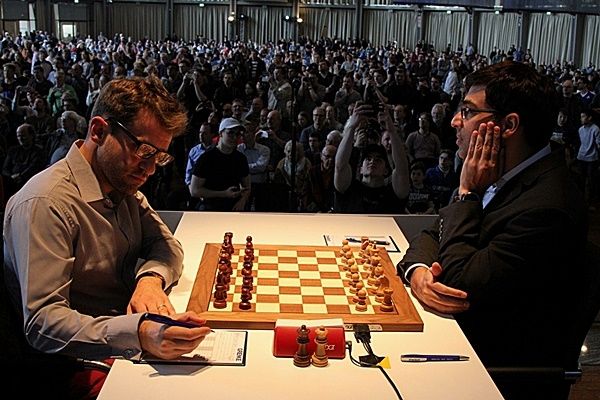 India’s Viswanathan Anand, after his loss in the previous round, was pitted against Armenian GM Levon Aronian in round 3. Aronian has been trying hard to make a comeback after his dismal performance at the recently concluded World Championship Candidates’. His win in the previous round was a very convincing one and rubbing him the wrong way in an attempt to eke out a win could have turned out to be fatal. Nevertheless, Anand had the white pieces and did make half an attempt to keep some chances in the game by going for an Anti-Berlin. Play remained fairly balanced all through the game and after exchanging a pair of minor pieces, the players decided to sign the truce by repeating the position. 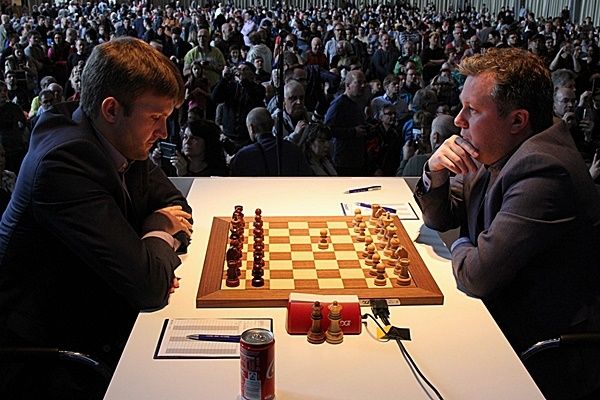 Arkadij Naiditsch’s game against tournament leader Nikita Vitiugov was an equally tepid affair. The game opened with a kind of a hybrid opening between the Italian and the Ruy Lopez. Both sides castled long. By the 30th move, all pieces except rooks were hacked off the board. In the dead equal rook endgame that ensued, the players shuffled pieces for 13 more moves before calling it a day. 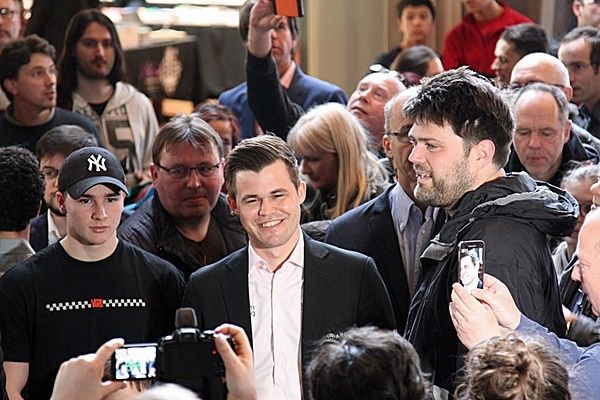 Magnus Carlsen tried very hard to bag the full point but had to settle for a draw in the end... | Photo: Georgios Souleidis 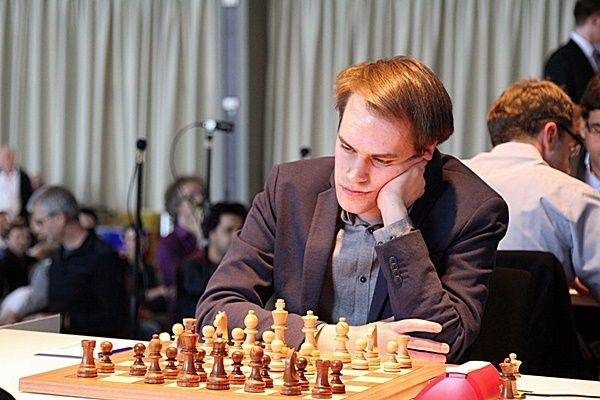 Of all the draws of the day, Magnus Carlsen’s draw against German youngster Matthias Bluebaum was the most exciting. Of course, Carlsen is the world champion and the highest rated player in the fray while Bluebaum lacks both experience and rating. It was understandable then that Carlsen wanted to push for a win even if he had the black pieces.

However, Bluebaum, too, has shown so far that he is not an easy nut to crack. In the previous round, he had held Carlsen’s newly appointed challenger to a draw and in this round, he matched his wits with the world champion. The world champion had declared his nefarious intentions against the white monarch quite early in the game by going for the Classical variation of the King’s Indian Defence. But despite all of the world champion’s attempts to bring him down, the young German GM refused to bend. After a mass trade of pieces a queen and knight versus queen and knight endgame was reached. Carlsen tried for 60 moves to create chances in the position but Bluebaum stood strong and made no errors forcing the world champ to settle for a draw.

Round three of was the final round to be played at the current venue at the Schwarzwaldhalle in Karlsruhe, Germany. Fourth round onwards, the tournament will move to Schach Zentrum (Chess Centre), Baden Baden. Due to the change in venue, Tuesday will be a rest day. Play will resume on Wednesday, April 4, 2018 at 6:30 PM IST.