Round two of the Grenke Chess Classic brought a shocking loss for India's Viswanathan Anand. Playing against Maxime Vachier-Lagrave, Anand tried to catch the Frenchman off guard by opting for the Taimanov variation of the Sicilian instead of his usual Najdorf. But soon the boot was on the wrong foot as MVL turned out to be well prepared in this line too. Meanwhile, yesterday's surprise leader continued to surprise as he maintained his half point lead over the field winning his second round game against Georg Meier. In the other games, Carlsen and Aronian outplayed Hou Yifan and Arkadij Naiditsch respectively while Fabiano Caruana was held to a draw by Matthias Bluebaum. Round 2 report.

Round 2: Four out of five games finish decisively!

After an electrifying first round, round two of the Grenke Chess Classic turned out to be yet another spectacle. While in yesterday’s round, one might say there was a shortage of decisive results, the second round featured as many as four decisive games while only one game was drawn. After the dust of the battles had settled, the surprise leader of round one, GM Nikita Vitiugov, managed to maintain his lead over the ultra-strong field with a perfect score of 2.0/2.

While the round per se was spectacular, it brought disappointment to Indian fans as Indian chess legend, GM Viswanathan Anand lost to the French number one, Maxime Vachier-Lagrave. Anand had the black pieces in the game. Instead of going for his usual Najdorf variation in the Sicilian, Anand decided to give his opponent a little surprise and went for the Sicilian Taimanov. However, the boot was soon on the wrong foot as it turned out that the Frenchman was well prepared in this line too.

The opening phase of the game was especially exciting. Quite early in the game, Vachier-Lagrave offered a bishop for a couple of pawns. Had Anand accepted the sacrifice, a swarm of pieces was ready to storm through in the center. But Anand was well prepared and played the best move in the position bringing his rook to the c8 square.

After the game, Vachier-Lagrave said that he was caught off guard for a split second when Anand came up with the rook move. “11…Rc8 came as a shock before I realized it was exactly what I had prepared,” the Frenchman said.

As play progressed, Anand tried to generate an attack on the white king. Vachier-Lagrave, however, was in total control and deprived Anand of having any chance at the white king. Queens were exchanged soon afterwards and the position, in the opinion of the computers, was still equal. Practically, though, the Anand’s pieces were caught in a bind. Anand resigned after white’s 38th move while the position was still equal materially. Perhaps, Anand resigned a bit early but given his position against a player of MVL’s calibre, he hardly stood a chance to hold. 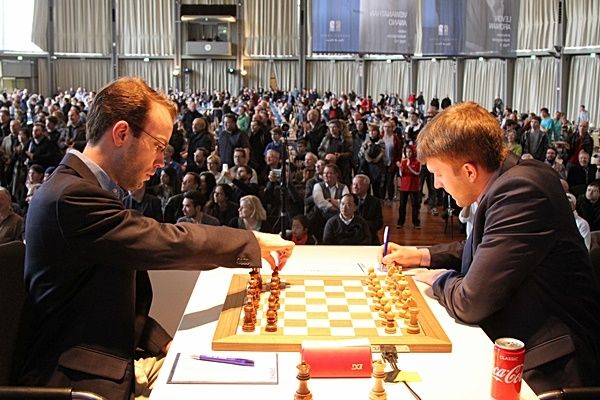 Tournament leader, Nikita Vitiugov is known to be a specialist in the French Defence. However, this did not deter his opponent, Georg Meier, from testing the opening against the Russian. “It’s always interesting when you have a knowledgeable opponent, I don’t really mind,” Meier said after the game. Vitiugov went for the advanced variation in response and soon liquidated into a favourable endgame. Interestingly, it was Meier who had the two bishops in this endgame (which is generally considered favourable) but Vitiugov who had the advantage. Vitiugov did, however, admit that his advantage wasn’t palpable until black’s 22nd move with which Meier hastily tried to gain some counterplay. By the 39th move, Vitiugov had completed his positional masterpiece.

After the game, Meier said that it was a miscalculation that led him to play 22.Nc4 as he had missed the fact that black’s b7 pawn remains en prise after white’s 29.Nd6. 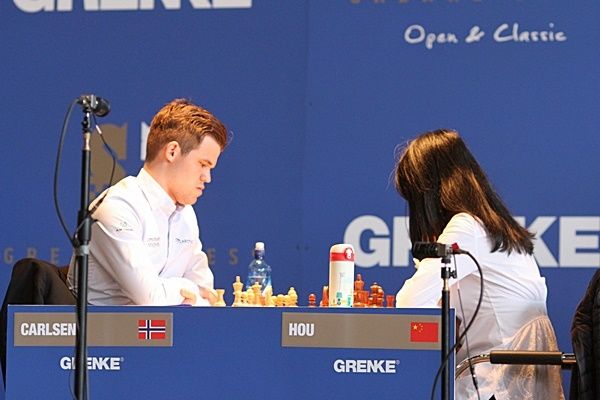 Carlsen hardly got any advantage against Hou Yifan out of the opening but managed to pull off his magic nevertheless! | Photo: Georgios Souleidis/Grenke Chess Classic

Talking of converting slightly unfavourable endgames, Magnus Carlsen’s game against Hou Yifan comes to mind. Carlsen essayed the Bishop’s Opening with the white pieces and was only able to get a slight edge out of the opening. Carlsen tried to generate some initiative on the black king in the middle game but Yifan swiftly exchanged queens and accepted a slightly worse endgame. Perhaps, against some other player, this could have been a good strategy but Magnus Carlsen has made a living out of converting the slightest of edges into full points. And to add to her problems, Hou ended up in time trouble nearing the first time control and missed her chance to maintain equality. After this, Carlsen mopped up in his trademark style and forced resignation on move 61. 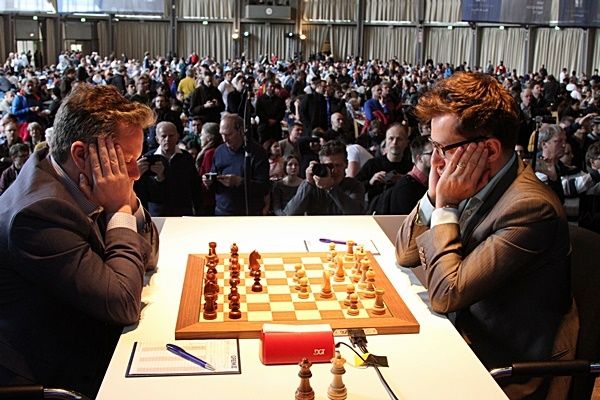 After attempting to grind down Maxime Vachier-Lagrave with aggressive play in round 1, GM Arkadij Naiditsch played another ambitious opening against Levon Aronian in the second round. With the black pieces, Naiditsch went for the King’s Indian Defence against Aronian’s queen pawn advance. As the middlegame commenced, Naiditsch played a bit too aggressively trying to break through to the white king. The big problem was that Aronian hadn’t committed his king to the kingside yet. Taking advantage of his opponent’s overambitious play, Aronian first tightened his stronghold on the queenside and then, after ensuring his king’s safety on the kingside, castled on move 23. While Naiditsch was unable to break through to the white king, Aronian crashed through on the queen’s wing. By the 35th move, Naiditsch was about to suffer a ruinous loss of material and decided to throw in the towel.

In the light of his dismal performance at the FIDE World Championship Candidates, this is a very welcome victory for Aronian. After his first round game yesterday, he had said that he felt it was good to play immediately after a bad show at the Candidates as it gave him an opportunity to move on. And with his convincing victory today, it is quite clear that he is taking steps in the right direction. 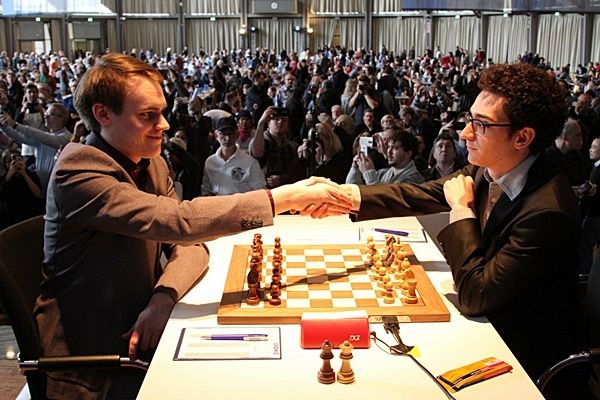 In the only draw of the day, Matthias Bluebaum defended himself heroically to avoid losing to Fabiano Caruana. The game had opened with the French Defence in which Caruana had the white pieces. With his rating advantage and a stupendous ongoing form, Caruana was clearly the favourite to win this game. Bluebaum, on the other hand, was coming back from a defeat at the hands of Vitiugov in the previous round. Out of the opening, Caruana tried generating a monstrous attack on the black king. Bluebaum too showed that he was well prepared and was not going to go down easily. By the 25th move, queens were traded and an equal endgame was reached; 10 moves later, the players agreed to a draw.

Two rounds down, Vitiugov is still leading the tournament. With their wins today, Carlsen, Aronian and MVL share the second spot at 1.5/2. Fabiano Caruana, with draws in both of his games, is fifth on the leaderboard while Anand and Hou Yifan and Matthias Bluebaum share the bottommost spot with 0.5/2.