All games looked like they were steered towards a draw in the fourth round of the Grenke Chess Classic. But just then, Fabiano Caruana's pieces began asserting their dominance over the board. It still didn't look like it could be enough but the Italian-American  GM pulled off à la Carlsen, drawing blood out of stone! Meanwhile, Vishy Anand played tournament co-leader Nikita Vitiugov and was held to a draw. We have a report with pictures and games.

After its first and only rest day, the Grenke Chess Classic moved to a new venue at the Schach Zentrum in the city of Baden Baden. From the very start it looked like the day was going to be a peaceful one and it was to quite an extent. Had it not been for Fabiano Caruana to change gears and pull out victory in the final stages of the round, all games would have ended in a draw. With his win, Fabiano has joined the leaders, Maxime Vachier-Lagrave and Nikita Vitiugov at 3.0/4.

For India’s Vishy Anand, things are starting to look bleak. With three draws and a loss out of four rounds, he is a point and a half behind the leaders. With five more rounds to go, he would need to win rake some points in the upcoming rounds to catch up with the leaders. As it stands, he is sixth on the leaderboard with a score of 1.5/4. 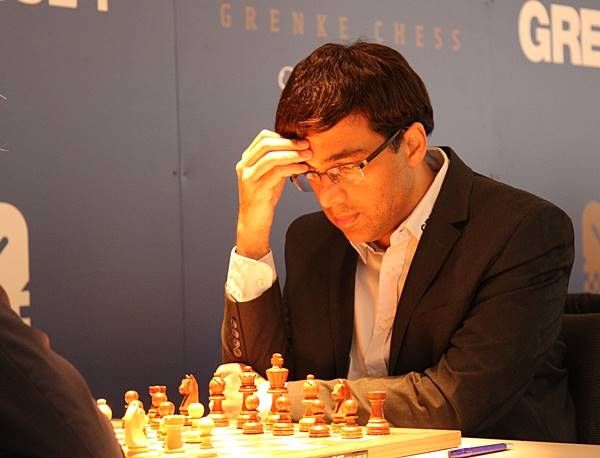 Anand is still looking for his first win of the tournament. | Photo: Georgios Souleidis

In round four, Vishy was paired against Vitiugov. Rating wise, Anand is the stronger player. But Vitiugov has been doing exceptionally well at the Classic, having maintained his early clasped lead almost halfway into the tournament. He also had the white pieces in his round 4 game against Anand. The game began with a Caro-Kann defence. 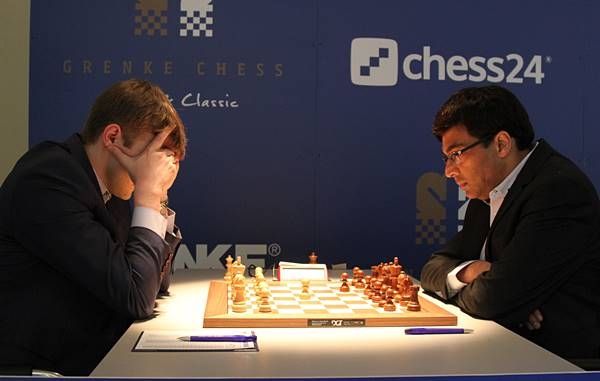 Vitiugov tried some tactical tricks in the centre but it led him nowhere against Anand | Photo: Georgios Souleidis

Anand went for the immediate central break with 3…c5 and managed to equalize very easily out of the opening. Vitiugov tried some tactics around the 20th move but Anand was alert and this little banter from the Russian only led to further liquidation. By the 25th move, queens were exchanged and about five moves later the rooks, too, were hacked off the board. The ensuing position was clearly a dead draw with each side having four pawns and bishops of opposite colour. The players did not try for too long after this before agreeing to a draw. 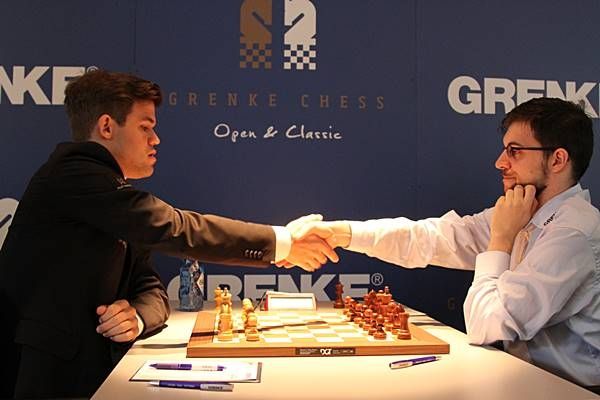 The Symmetrical English in the Carlsen-MVL game only led to the point being split | Photo: Georgios Souleidis

Another important game of the round was the one between world champion Magnus Carlsen and world number five, Maxime Vachier-Lagrave. Carlsen, despite being the highest rated player at the event, isn’t at the top and this was a good opportunity for him to knock down one of the leaders and take the lead himself. Had Vachier-Lagrave won, he would have taken the sole lead. As the game began, the two chose the Symmetrical English to kick off and followed the moves of one of their earlier encounter from the World Blitz Championship in Riyadh. However, Carlsen drifted away from the moves he had played in the previous game soon. But this too led to simplification soon. Almost within the first fifteen moves, an endgame was reached. Carlsen gave up a pawn in an attempt to create chances but Vachier-Lagrave almost immediately returned it back and neutralized. By the 22nd move, an equal endgame was reached which the players played out until the 40th move and signed peace. 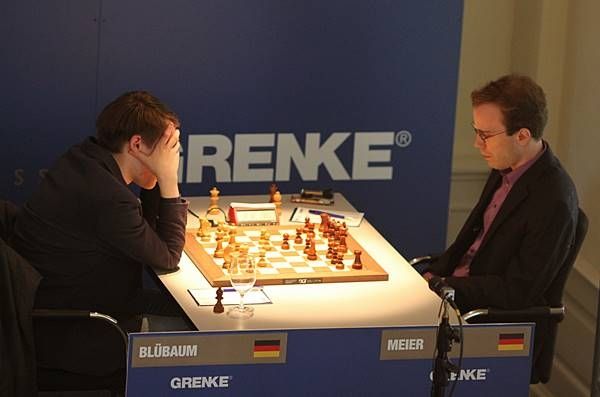 The all-German encounter between Bluebaum and Meier was just as dull as German humour is believed to be | Photo: Georgios Souleidis

The all-German encounter between Matthias Bluebaum and Georg Meier also headed to a draw quite early out of the opening. The two opened with a Queen’s Indian Defence and mass exchanges occurred right out of the opening. Before the 25th move, each side only had a queen and a knight with equal pawns and neither side having many chances. The players signed peace after playing out the endgame until the 44th move. 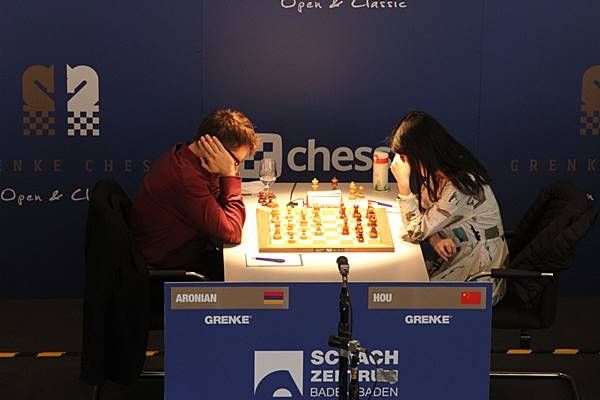 Aronian was held to his second consecutive draw in round 4 | Photo: Georgios Souleidis

After his win in the second round, it seemed Lev Aronian might go all guns blazing at his opponents and make a strong comeback after his poor show at the Candidates’. However, since the last two rounds, the Armenian number one seems to be taking things slow. In round six, he drew his second consecutive game against Chinese GM Hou Yifan. In the game, the players had reached an endgame with an almost symmetrical pawn structure within the first 25 moves. While Yifan had some attacking chances in this endgame, her assessment was that they were not enough. After shuffling pieces for around 10 more moves the players signed peace by repetition on the 39th move. 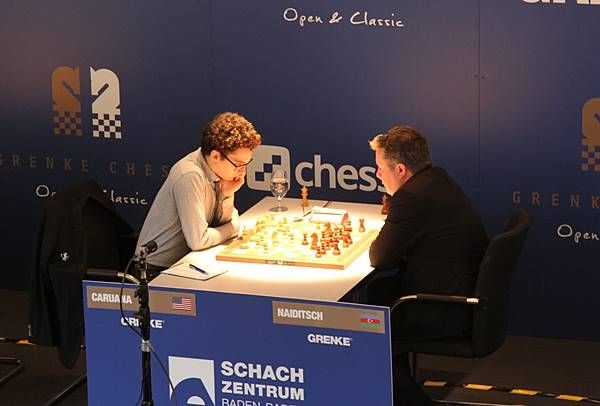 Caruana and Naiditsch seemed to be headed towards a draw but Caruana had some wicked intentions | Photo: Georgios Souleidis

While all these games headed straight towards a draw, one could not have put much faith in the game between Fabiano Caruana and Arkadij Naiditsch to end decisively either. Of course, being the aggressive player that he is, Naiditsch had flung his kingside pawns forward with the black pieces in an attempt to annihilate his opponent’s king. But this was quite uncharacteristic for the innocuous Anti-Berlin opening that the players had essayed. As it turned out, the attack fizzled out eventually and an endgame with both sides having a queen and a knight emerged. The computers evaluated the position as a dead draw and, perhaps, with perfect play, it even was. But as Caruana saw it, he his pieces had the chance to dominate his opponent’s and that was reason enough for him to play on.

In the next phase of the game, Caruana pulled off a la Carlsen. The newly appointed world championship challenger played immaculately to prove the dominance of his pieces. At one point he even gave up a pawn as his queen and his knight coordinated harmoniously to harass the black king. By the 43rd move, Naiditsch had a choice between losing ruinous loss of material or getting mated. He chose neither and resigned.

With this victory, Caruana has also joined the leaders, Maxime Vachier-Lagrave and Nikita Vitiugov with a score of 3.0/4. Carlsen and Aronian are half-a-point behind at 2.5/3 while Anand along with Matthias Bluebaum is a further point behind at 1.5. The bottommost spot is share by Hou Yifan and Georg Meier who have both scored 1.5/4.