Round 5 of the Grenke Chess Classic found world champion Magnus Carlsen on tightropes against German GM Georg Meier. Had it not been for the time trouble, Carlsen's downfall was certain. But as they say, "there are no heroes under time trouble". Meier failed to find the finishing blow just one move before the first time control and the game fizzled out into a draw just four moves later. Anand's game against Caruana also created some early rippled but the ensuing mass exchanges only led to the players shaking hands to sign peace. Arkadij Naiditsch was another player to blow the bugle and launch an all-out attack from the word 'go' in his game against Matthias Bluebaum. Naiditsch came very close to victory in the game but some extremely resourceful defence saved Bluebaum half a point. We have a report with game analysis by WIM Angela Franko Valencia.

After five rounds at the Grenke Chess Classic, there is still a three-player traffic jam atop the leaderboard. The games of the fifth round did not even make any changes to the leaderboard, leave alone resolving the clutter at the top. The reason: all five games were drawn and every player, therefore, remained in the same position on the leaderboard. Nevertheless, the round wasn’t totally devoid of excitement. The game which roused the most interest was the one between Georg Meier and Magnus Carlsen. Arkadij Naiditsch also generated a powerful attack on Matthias Bluebaum’s king but the young German grandmaster defended resourcefully to hold on to a well-deserved draw. Anand too got off to an exciting start against Fabiano Caruana but the position soon fizzled out into equality. 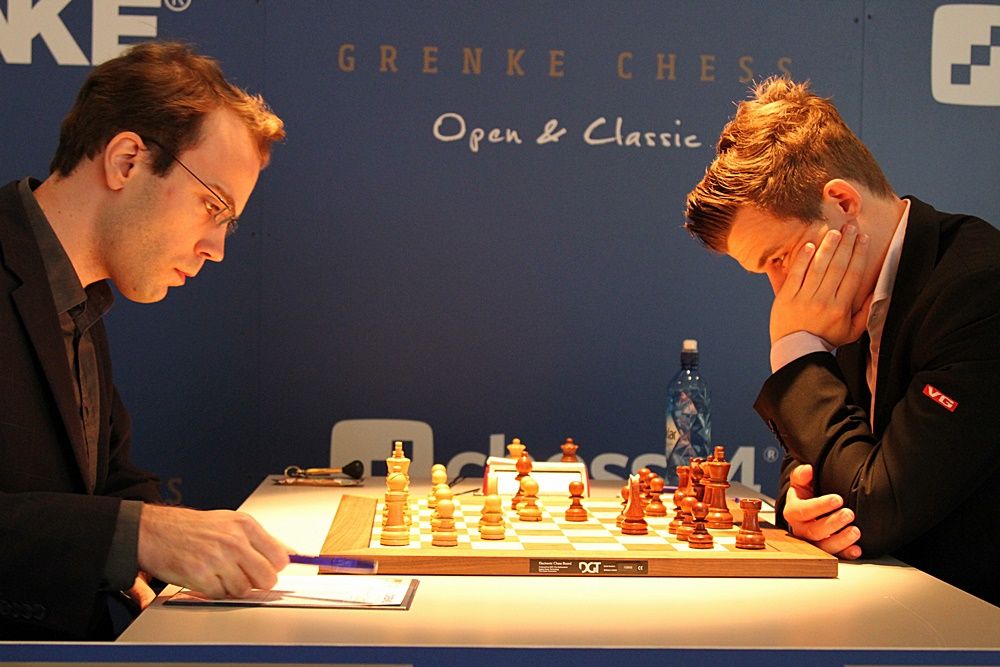 Magnus Carlsen took a few too many risks in his round 5 game against Georg Meier | Photo: Georgios Souleidis

As mentioned above, Magnus Carlsen’s was the game which drew the most attention in the round. However, this wasn’t because the world champion was pulling off one of his trademark slow-strangle victories out of a quiet equal-looking position. It was because Georg Meier, one of the lower rated GMs in the field was on the brink of demolishing the world champ’s king.

Out of a Closed Catalan, Carlsen went for a risky line with the black pieces which he said he knew was bad “but still decided to play it”. In the middle game, Meier seized the initiative on the queenside and began to take over the position. Carlsen knew he had to react and he did so at the cost of weakening his king on his 26th turn. By this point, both players were short of time and Carlsen was, perhaps, banking on this for Meier to go wrong. But as it turned out, Meier found the right counter-attacking ideas and had the world champion on tightropes before the ticking clock made him falter. Just one move before the first time control, the German grandmaster failed to find the best continuation. In fact, there were more than one ways to win but Meier’s move just lost all advantage as it led to immediate liquidation. Just four moves later, peace was signed. 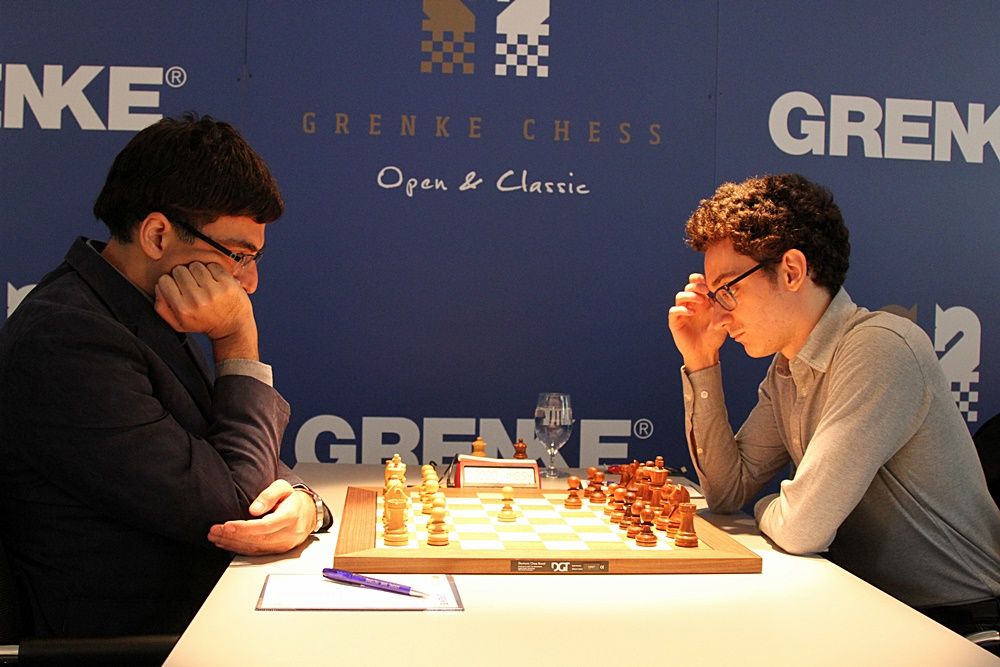 Anand was involved in his second Caro-Kann of the tournament in round 5 | Photo: Georgios Souleidis

Vishy Anand found himself in his second consecutive Caro-Kann in round five. This time, though, he had the white pieces. Soon after the game opened, fireworks were seen over the board. Both players tossed pawns out of the opening. First it was Caruana, then Anand and then Caruana again. By move 18, Anand got his pawn to the seventh rank of the board by temporarily sacrificing a piece. Caruana had apparently seen this and had concluded (correctly) that this only led to simplification. At the end of all skirmishes, Anand emerged with an extra pawn but was in no position to hold it. Caruana soon recovered his pawn and a move after the first time control was reached, a draw was agreed. 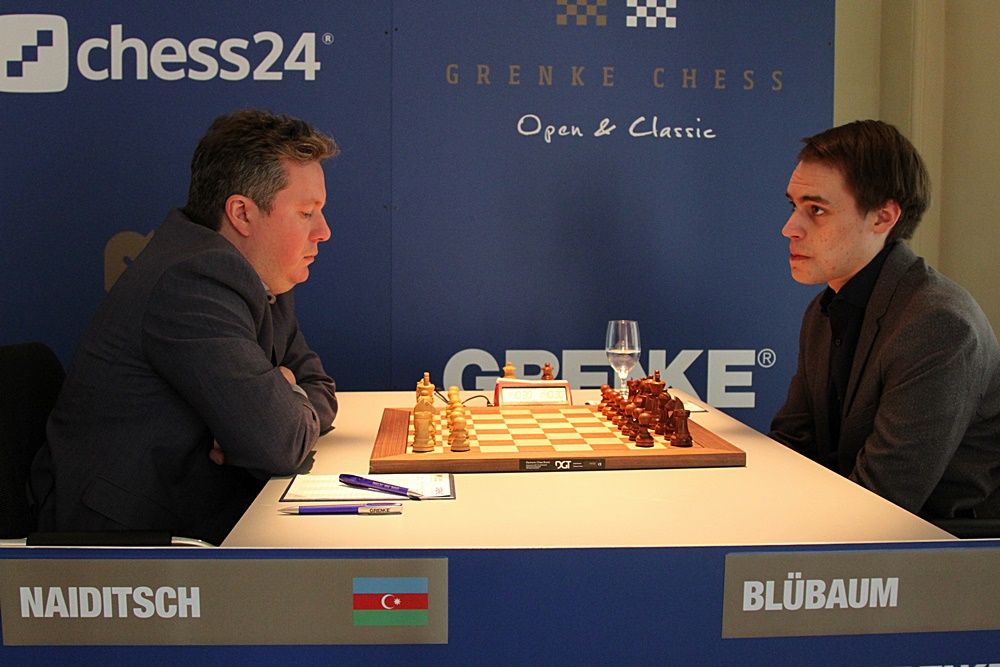 Naiditsch, as has been clear by his play in the tournament so far, has always been on the lookout for complicating matters and finding aggressive continuations. In this game too, he flung his g-pawn up the board quite early in the game and quite successfully generated a strong kingside attack. On the outset, it did look double-edged but one could, for certain, have underestimated it. Bluebaum tried to keep the position in control with a sham sacrifice of his light-squared bishop on his 19th turn and netted a pawn to the good. Naiditsch, in response, demonstrated that this little pawn grabbing tactic of his opponent only led him into trouble. In the next few moves, all of Naiditsch’s pieces loomed around the black king and the Bluebaum’s position began to look suspicious. Clinging on to dear life, Bluebaum liquidated into an endgame where he had a rook for Naiditsch’s bishop and three pawns. Objectively, this should have been winning for Naiditsch but from this point on, the German GM began to defend resourcefully. Getting his rook active, Bluebaum was able to hack of each and every one of Naiditsch’s extra pawns. The two battled for 65 moves and decided to call it a day when no pawns were left on the board. 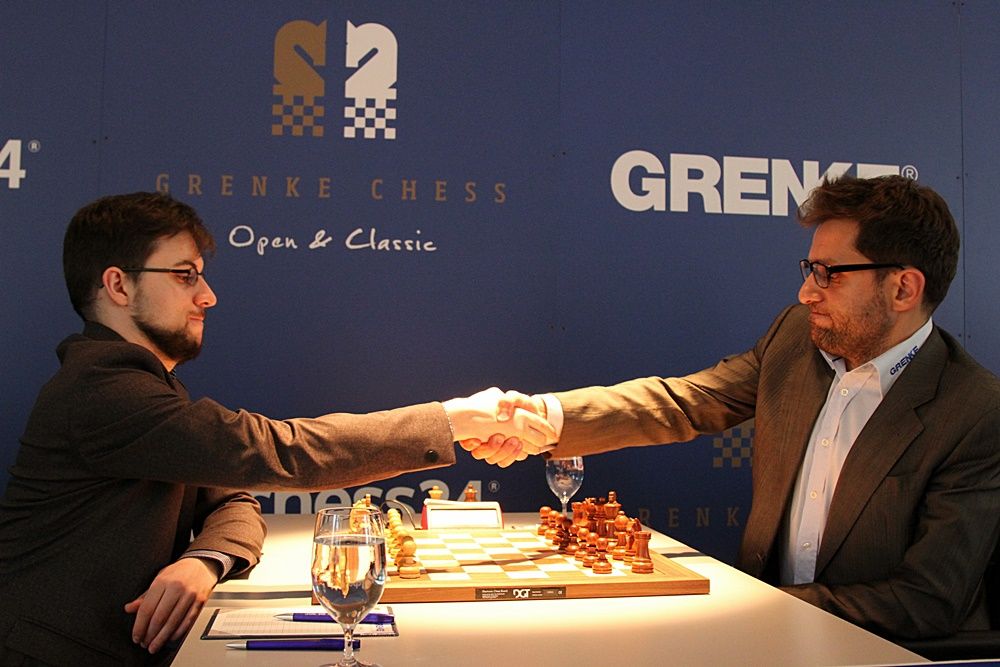 Aronian missed a tactical shot in the middlegame but came up with a nice counter shot of his own to keep things in control against MVL | Photo: Georgios Souleidis

The Anti-Marshall system of the Closed Ruy Lopez gave Maxime Vachier-Lagrave a neat tactic in the middlegame in his game against Levon Aronian. Aronian, admittedly, was taken by surprise as he missed the move in his calculations. Luckily for him, there was this counter shot that entailed an exchange sacrifice and restored equilibrium. This time around, Aronian did not miss his defensive resource and the resulting position was a dead draw. By the 36th move, players had signed the truce by move repetition. 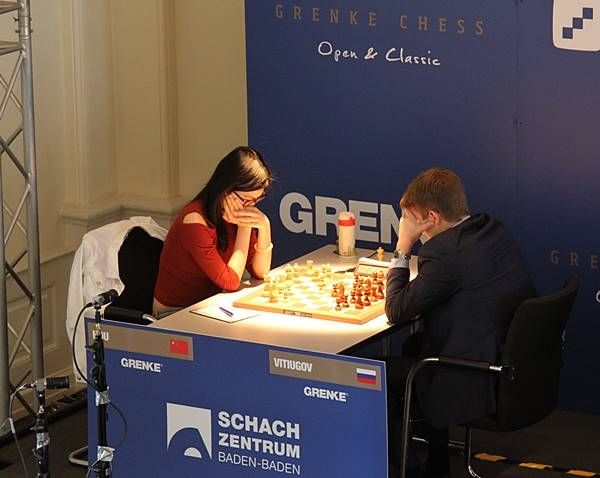 Hou was a pawn down in the final position of her game against Vitiugov but with her strong knight on d5 had everything under control | Photo: Georgios Souleidis

Hou Yifan also went for a Ruy Lopez with the white pieces against one of the tournament leaders, Nikita Vitiugov. In this game, too, early exchanges brought an endgame around move 25. Vitiugov did manage to win a pawn at the end of the sequence but his extra pawn was immobile and backward. Not to mention, his bishop too was rather passive. Hou was, therefore, easily able to create a strong blockade on this extra pawn and ensure that it never moved. By the 39th move, this game also finished with repetition.

Nothing at all has changed on the leaderboard at the conclusion of the fifth round. Vitiugov, Caruana and Maxime Vachier-Lagrave lead the tournament with a score of 3.5/5 as Carlsen and Aronian chase them being half a point behind. Anand is still looking for his first win of the tournament and his in the joint third place on the leaderboard along with Matthias Bluebaum. Both of them have scored 2.0/5.