Build your stamina for tactical play with Adhiban

Grandmaster Adhiban Baskaran tested his skills with the ChessBase tactics training, and did so while streaming with a cowboy hat on his head. But he didn't need a gun to be explosive. Adhiban made upper-cuts, flying kicks and used his Five Point Palm Exploding Heart Technique combos, because every correct move you make in the ChessBase tactic-training is accompanied by "punching sounds". It is a pleasure to watch a Grandmaster making beautiful tactical moves in split seconds. In his stream Adhiban shows us all the moves. Photo: Adhiban's youtube stream 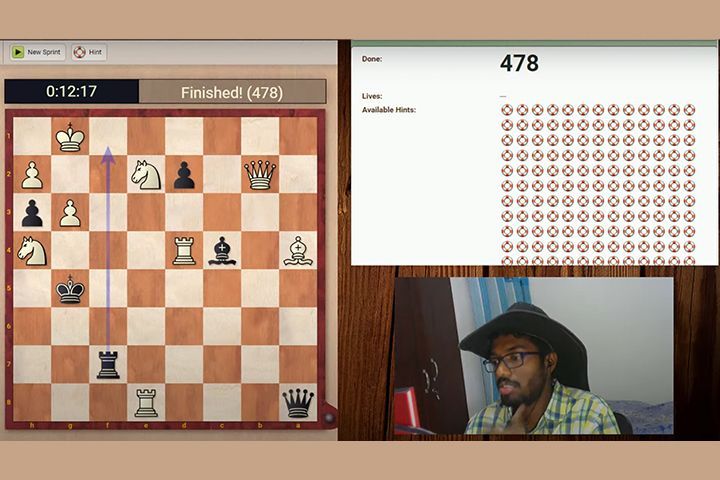 Adhiban Baskaran just opened his YouTube channel a week ago and already has a fan base of over 15.000 subscribers. But this is not really a surprise because the Indian Grandmaster is very relaxed and authentic and it is fun to watch him stream. He has a naturally positive vibe and his laugh is contagious.

IM Sagar Shah and Amruta Mokal with Adhiban and his family

Adhiban is a well-known and popular Grandmaster who more than once has made headlines.

E.g. in 2017, when he finished third Tata Steel Tournament in Wijk aan Zee though he was nominally the weakest player in the field. But with fearless and creative play he finished ahead of players like Aronian, Karjakin, Giri or Nepomniatchi.

But Adhiban is also famous for losing a game because of his watch. At the 40th National Team Open in February 2020 he was forfeited for wearing an ordinary wrist watch which was against the very strict rules. However, his team won the event and Adhiban scored 6.5 from 8, including the forfeit.

In Adhiban's most recent YouTube video you can see how he tries to set a new record in the  ChessBase Tactics-Section. He tackled the tactical problems with a vengeance and indeed set a new record – which, however, lasted only a day!

It was the 22-year-old Turkish Grandmaster Cemil Can Ali Marandi, alias "Dust Tornado", who broke it again. Will it just be a matter of time until Adhiban, known as "The Beast", jumps to spot number one again? FM L R Srihari bested 'The Beast's score and jumped to the second spot. Moreover, the second youngest GM in history and India's youngest GM, D Gukesh, also had a go at the record which more and more strong players try to break! And where are you in our ranking list?

Trying to solve chess tactics like GM Adhiban is a fun exercise and very challenging. Many chess players try to beat their own records or those of others. Making a mistake in time pressure often leads to furious outbreaks and screaming, but maybe that is just part of the training?

Luckily, the ChessBase Tactics have three different options to offer:

Fight against another player

• The high intensity training of chess tactics. You get a point for every position you solve faster than your opponent. Thirteen points win the fight.

• Run against the clock. How many positions can you solve in four minutes? You have three lives and five hints. Positions increase in difficulty. Earn extra time, lives and hints for good progress.

Even our standard package members can let off steam in our tactics section with all full features, except the engine usage. The premium members have the full content of 90k positions. Chances of playing a similar puzzle are fairly small.

Arne Kaehler, a creative thinker who is passionate about board games in general was born in Hamburg and learned how to play chess at a very young age. Through teaching chess to youth teams and creating chess content on YouTube, Arne was able to extend this passion onto others and has even made an online chess course for anyone who wants to learn how to play this game. Currently, Arne blogs for the English news page of ChessBase and focuses on creating promotional and entertaining articles.