The symphony with mathematics continued, as all 5 classical games were drawn in Round 5! Levon Aronian had the best chance to win against Ding Liren, but the Armenian genius couldn't properly assess the winning continuation. The Armageddons though were something else. Ding Liren was completely lost, somehow managed to find himself a queen up, yet could only find perpetual check. Carlsen was suffering against MVL before escaping with a repetition. Yu Yangyi turned the tables on a hapless Caruana after finding his king under a monsterous kingside attack. Grischuk won on time against Mamedyarov, who had White! Anand was the only one who drew his game as black comfortably without much action. An exhaustive report from Norway Chess by Tanmay Srinath.

As is customary of a classical chess tournament, there are times when there is action on all the boards, but somehow the games wither out to tame draws. This is what happened in round 5. The longest game of the round lasted 46 moves, and it definitely wasn't the most fighting one. What was amazing today was the magnitude of errors by some of the best players in the world, clearly due to nervous tension and tiredness! Let us now go into the intricacies:

Before going into the most interesting game of the round, we shall look at the longest game, So-Anand. Vishy played the new Archangel with the improved Moller move order, and soon equalised chances. In the next part of the game, it seemed to me that Anand was pressing for an advantage, with possibilities down the open f-file.There were two different times where he could have successfully unbalanced the play: 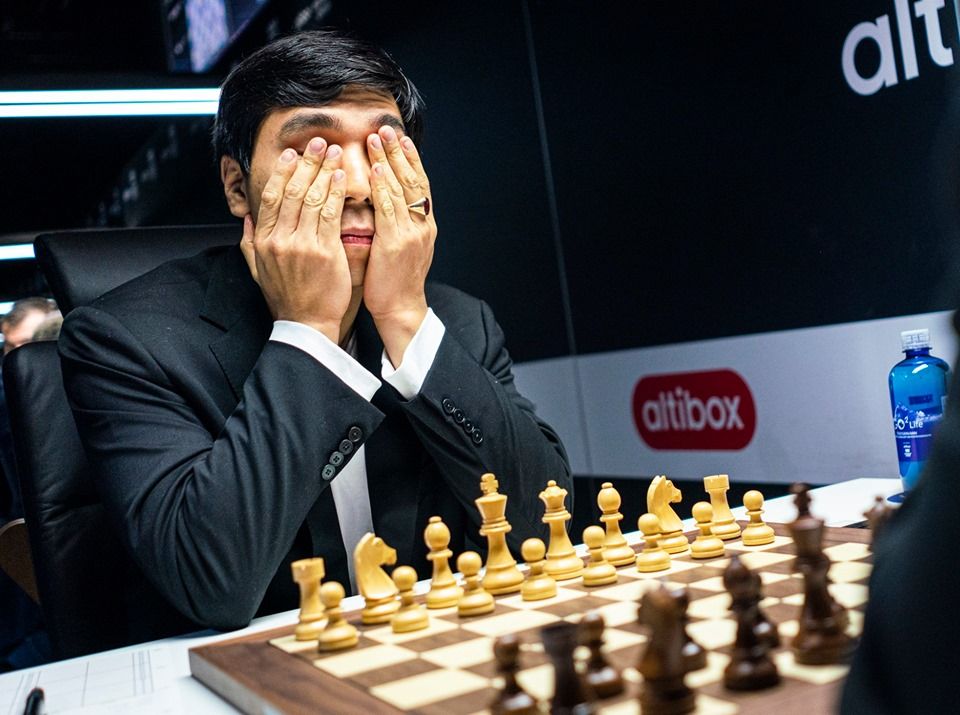 Wesley So couldn't get much out of his preparation today. | Photo:Norway Chess 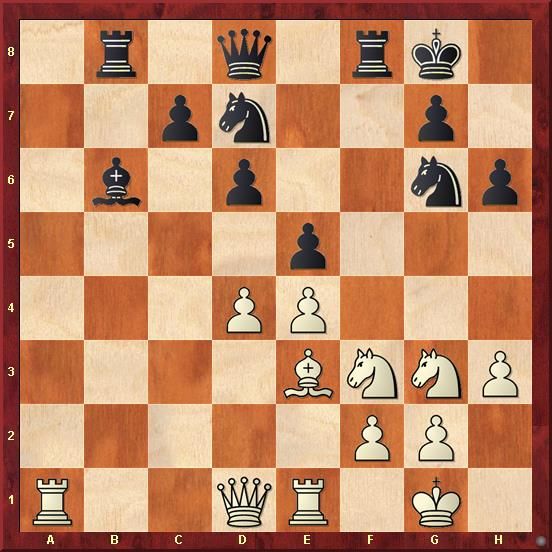 With the exchange sacrifice Rxf3! Vishy would have got a weakened kingside to play against, and chances of a successful kingside attack based on control over the key dark squares e5 and f4, which would serve as good outposts for his knights. Anand instead went Qf6!? and though play was equal, he soon got another chance. 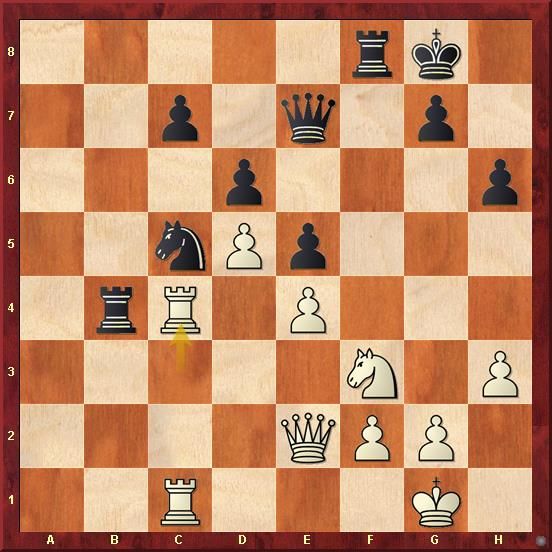 Vishy could have kept both pair of rooks on the board with Rb3, and as I see it Black is the only one who is going to benefit from it. But his decision to swap them is understandable - he was probably confident of his chances in the Armageddon.

Ding Liren-Aronian was a Queen's Indian Structure where black seemed to have equalised rather easily on first sight. The position however was very deceptive, and Ding Liren had a great chance to seize the initiative: 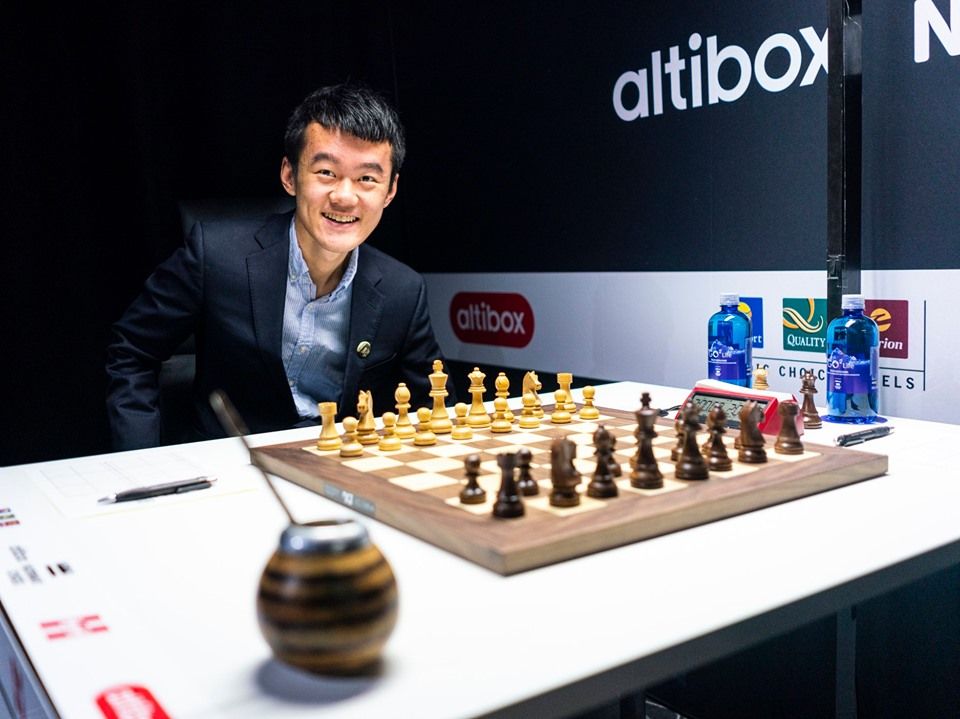 The Chinese No.1 in good spirits before the game. | Photo:Norway Chess 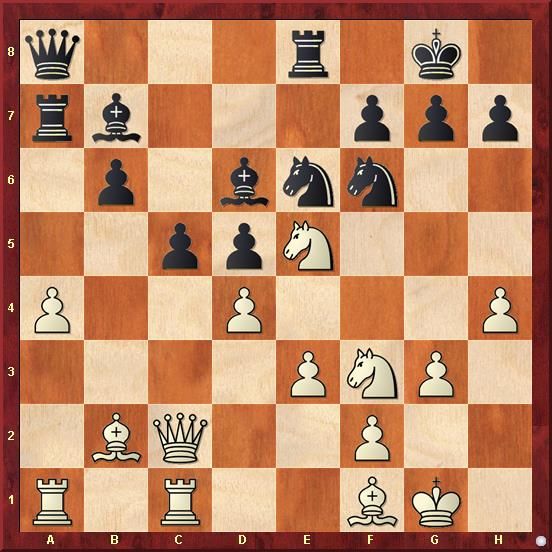 Ding Liren was to play here, and the World No.3 went for Bb5?!, losing more than just his advantage. Can you do better? White to play and move. 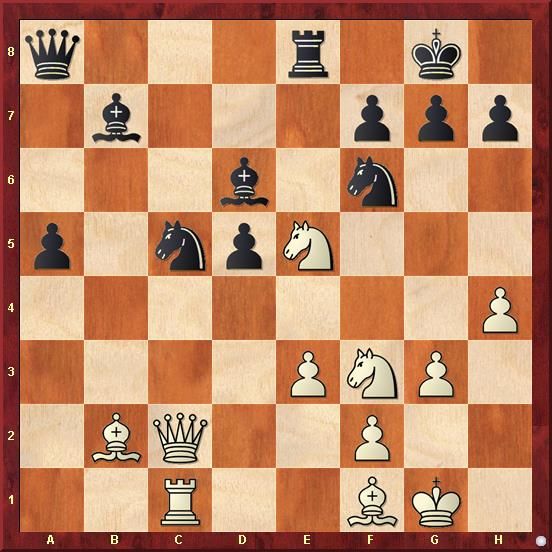 This position didn't occur in the game. However, this is a good calculation exercise. White to play and win! The solution follows in the annotations. 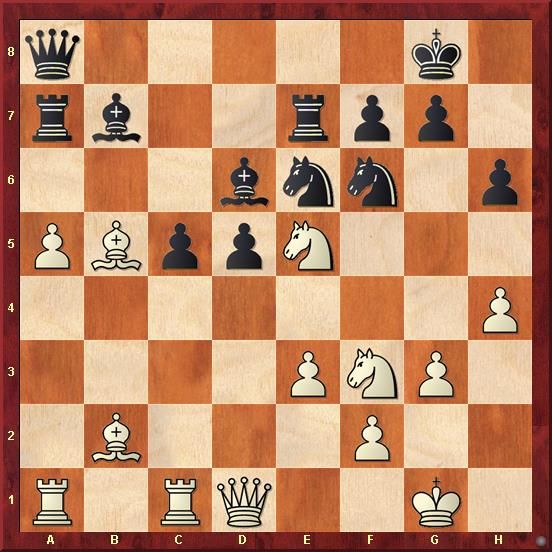 After Ding's mistake, Levon gained an advantage. However, he didn't play the best move. Black to play and get a near decisive advantage. 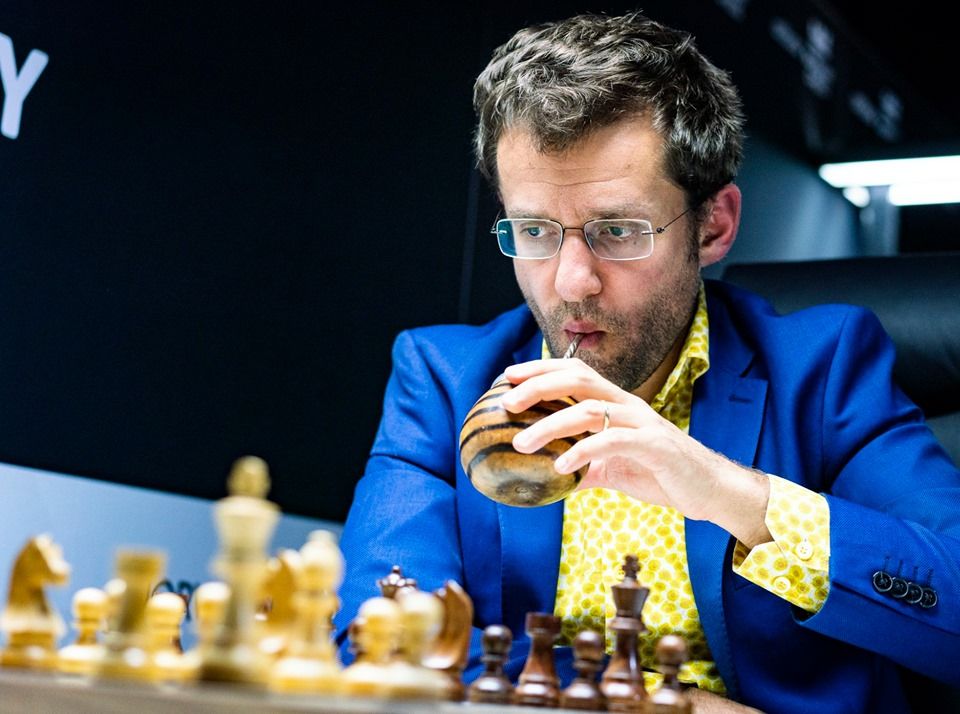 MVL-Carlsen and Mamedyarov-Grischuk were tame draws. Yu Yangyi-Caruana was the most curious results in recent times-the Chinese player took the threefold repetition in what seems to be a much better position for him: 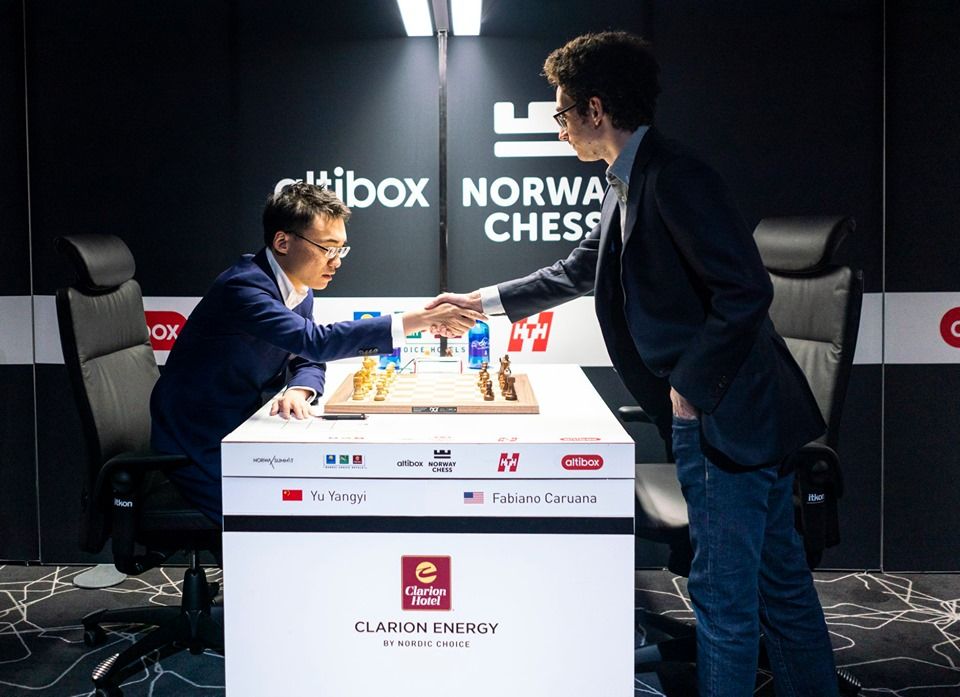 One of the strangest draws in this tournament. | Photo:Norway Chess 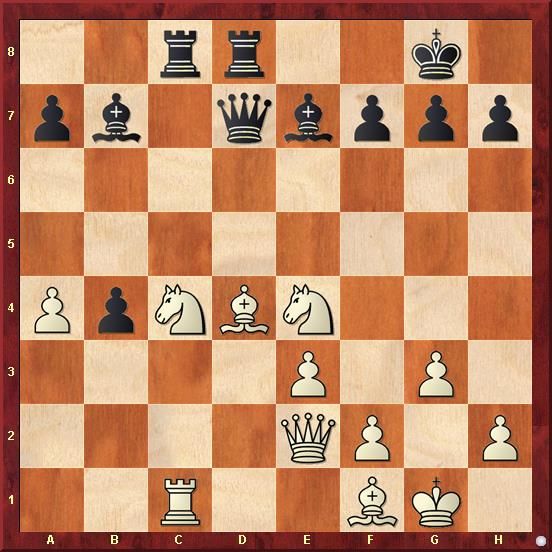 A number of moves give White a huge plus, none more so than f3!. Instead, the players repeated the position for the third time after Bg2? Ba6 Bf1. 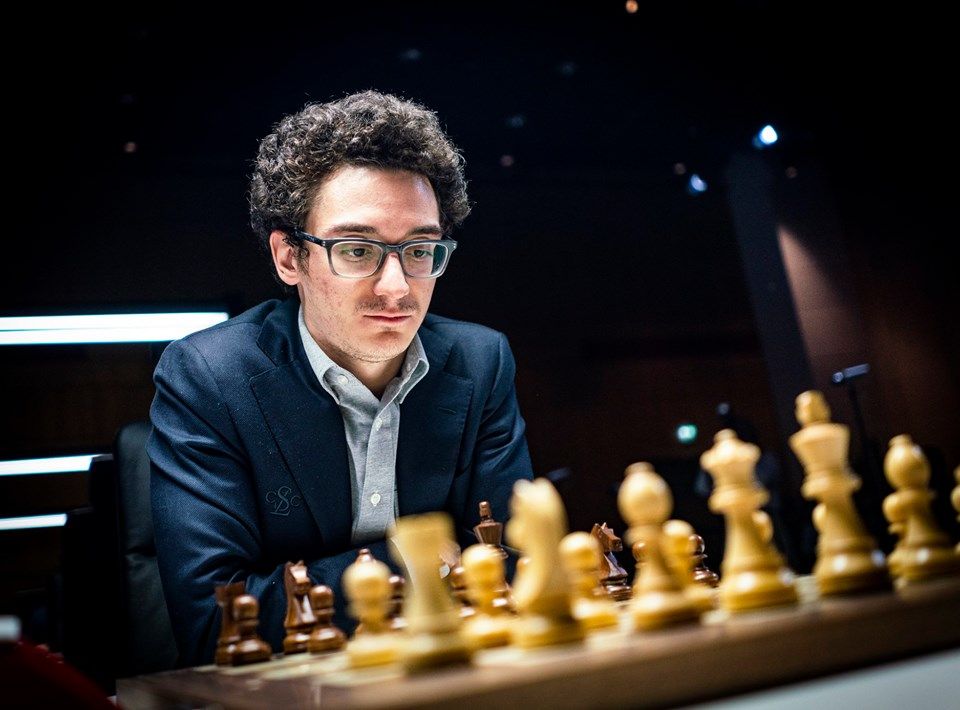 Yu Yangyi made up for his miss in the classical game by making a fine comeback as White after Caruana missed a winning continuation: 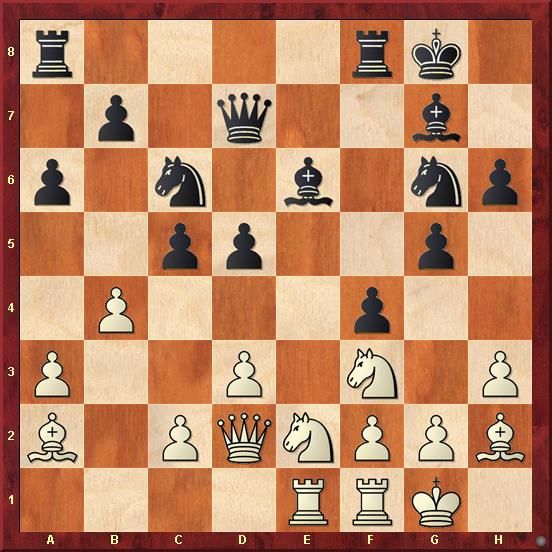 Fabi took on b4 in this position, which is not a bad move, but definitely not the best move. Instead, g4! kills off any further resistance, as after hxg4 Bxg4 Black's threats on the kingside are too many to parry successfully.

Vishy Anand won his encounter confidently against Wesley So, by transposing into a drawn double rook endgame that is a book draw: 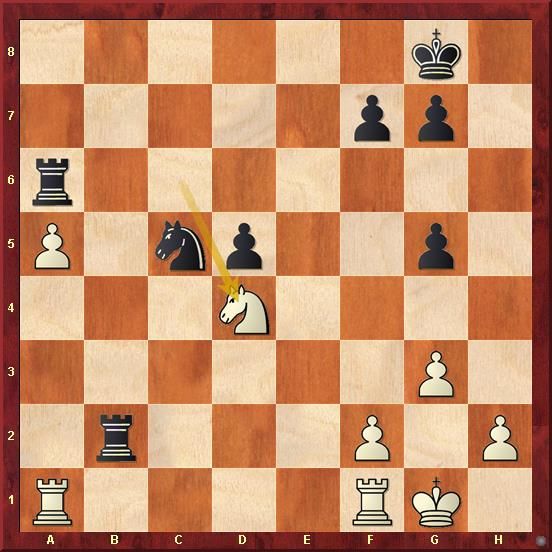 With Nb3! Anand forced liquidation, after being under slight pressure in the middlegame. So had no other option than Nxb3 Rxb3, and soon conceded defeat ( a draw is equivalent of a loss for White). 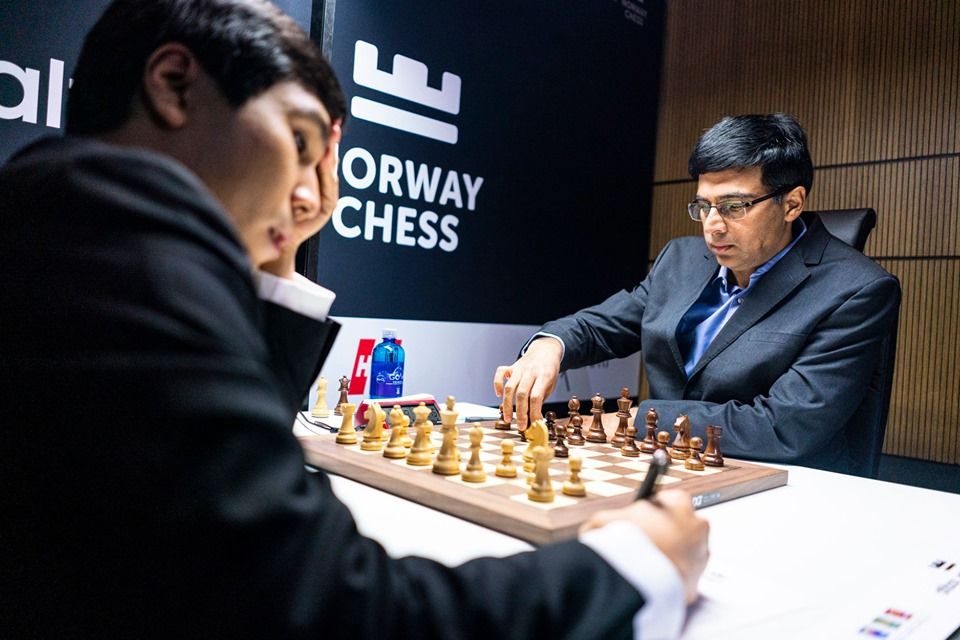 Anand wins in the Armageddon yet again! The Madras Tiger is now firmly entrenched in the trailing pack. | Photo: Norway Chess

Ding Liren will be cursing his luck in this tournament. First he missed a wonderful pawn sacrifice in the classical encounter, then messed up a clear win against Levon Aronian: 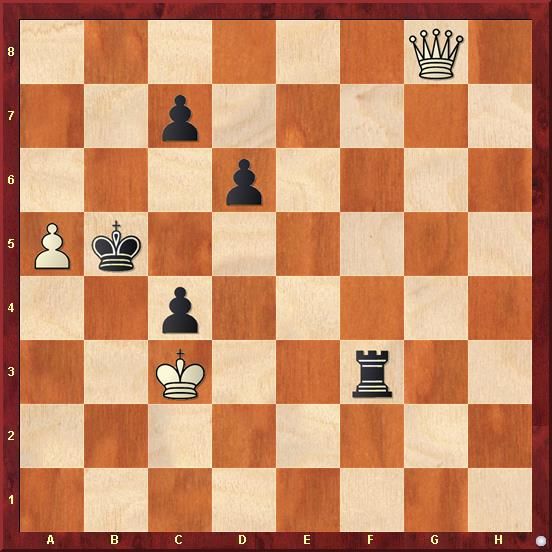 Logic dictates that the king should be near the passed pawn, to block it effectively. So, Kd2! or Kc2(?!) win trivially. Instead, Kd4? throws away the win-Rd3+! is a fortress, which Levon holds to perfection.

Magnus Carlsen too won his armageddon against MVL by simplifying into an equal rook and bishop endgame: 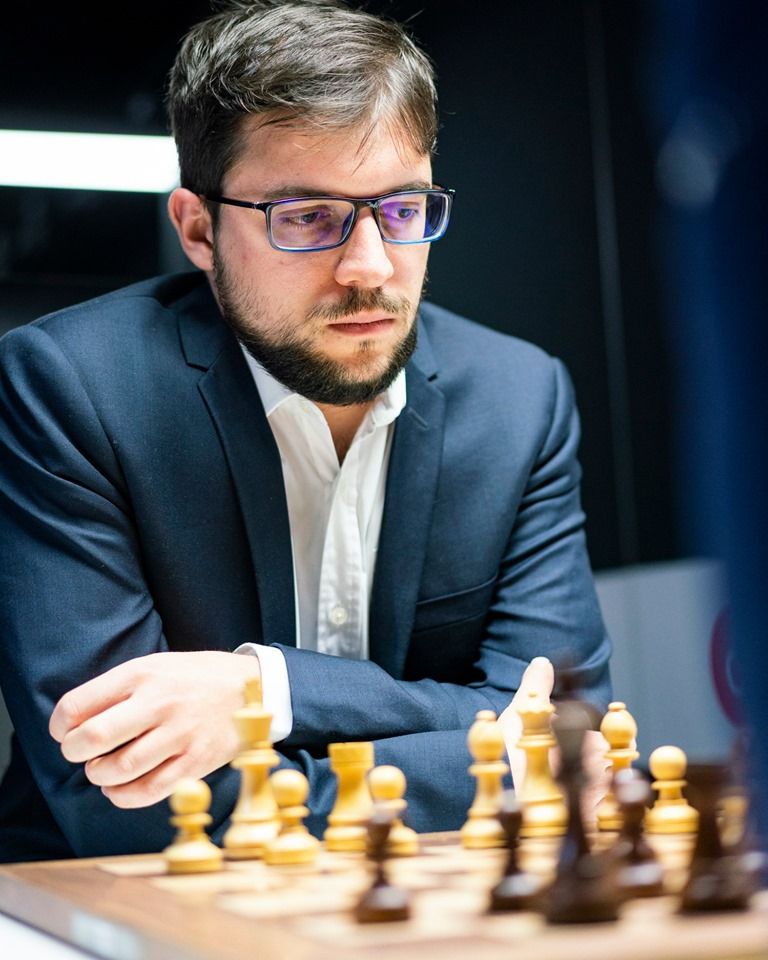 MVL hasn't had his best tournament so far after razing the blitz section. | Photo:Norway Chess. 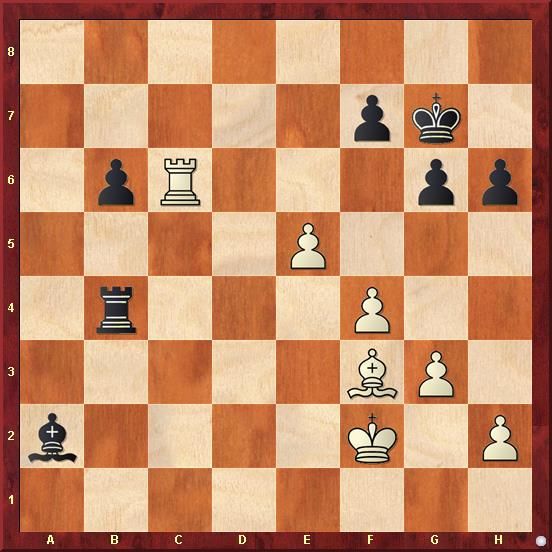 MVL tried breaking through, but Carlsen held firm and managed to draw by keeping his bishop as an anchor on e6. 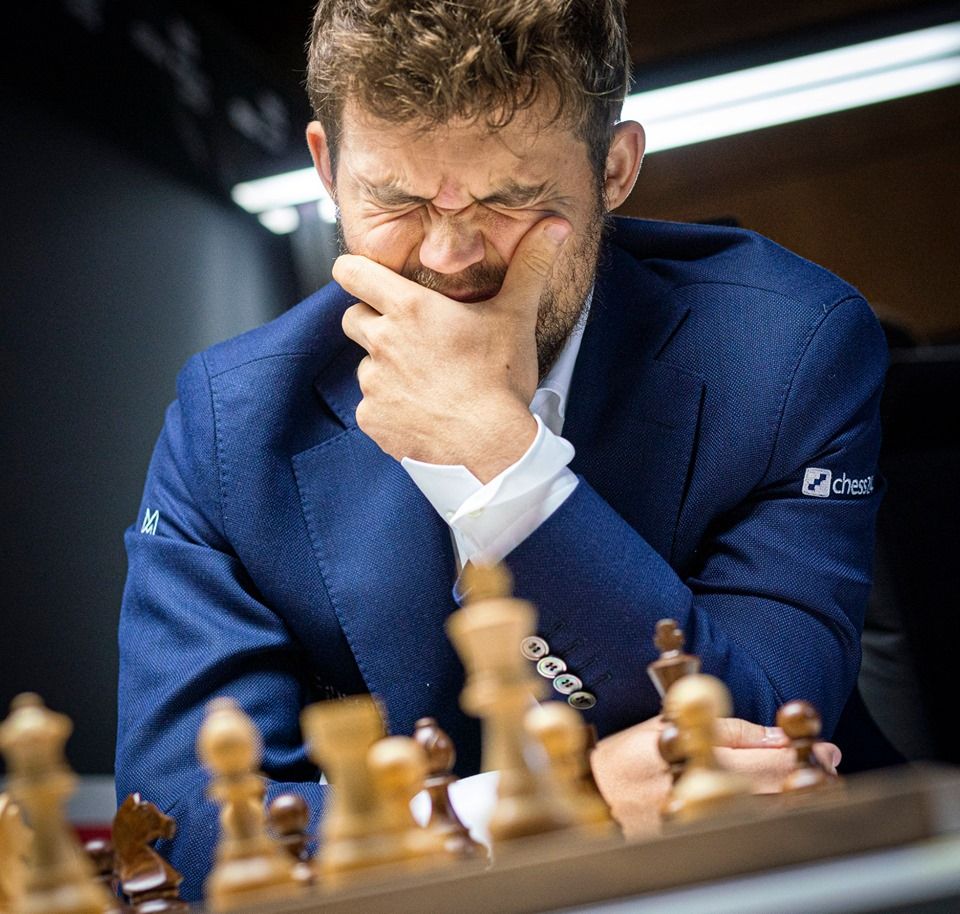 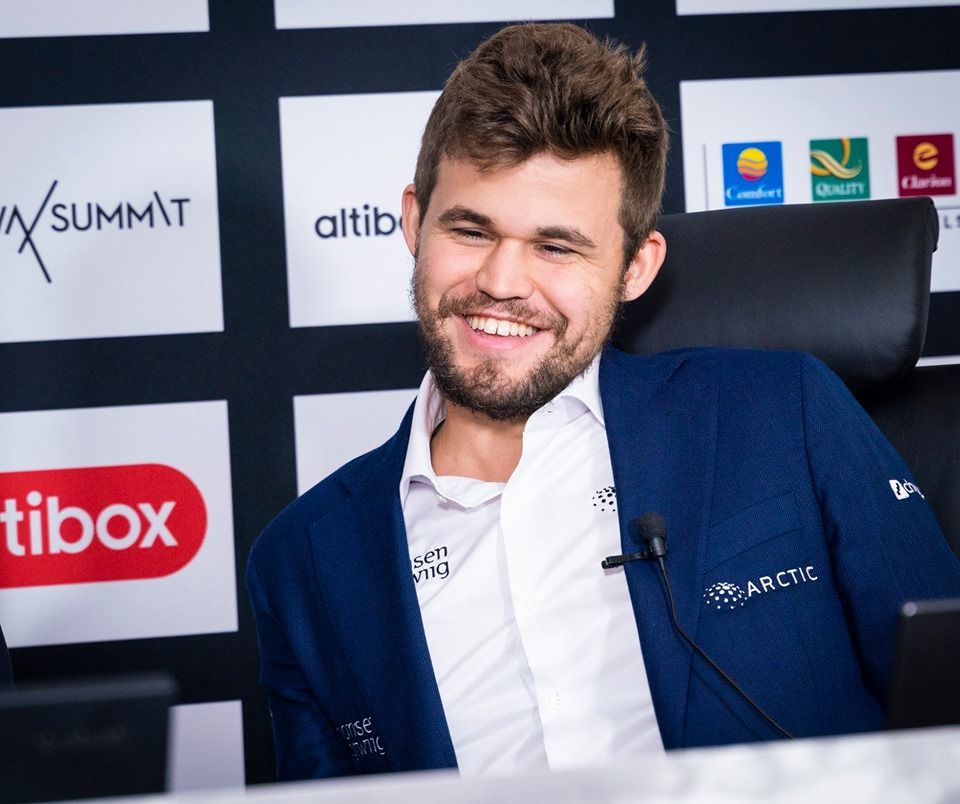 The World Champion extends his lead at the top. Can he win it with rounds to spare? | Photo: Norway Chess

Alexander Grischuk finally won an Armageddon(!), but he could have forced Mamedyarov's resignation much earlier: 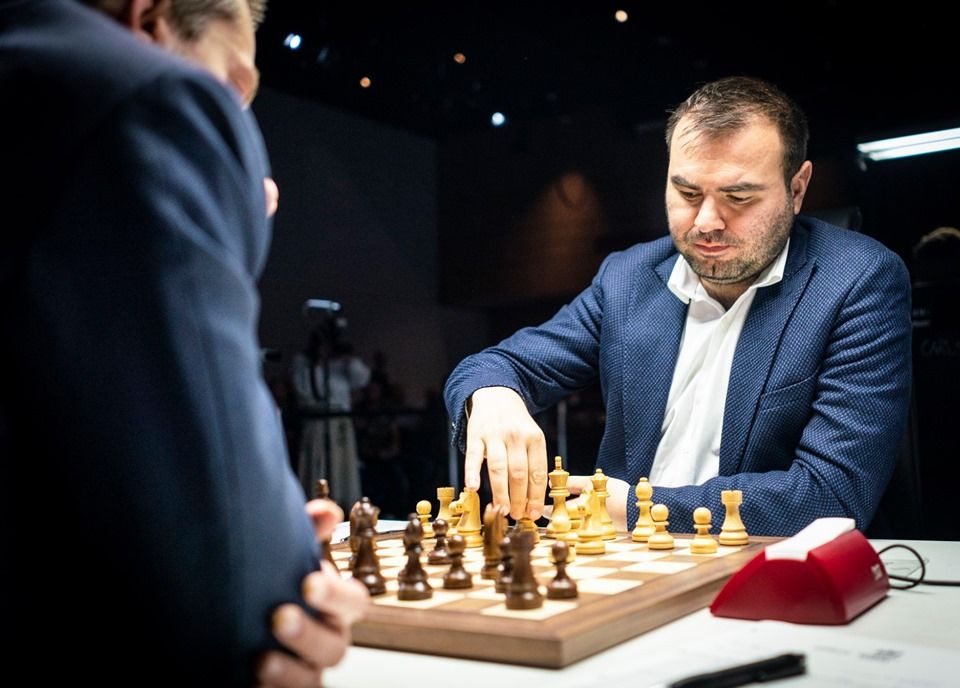 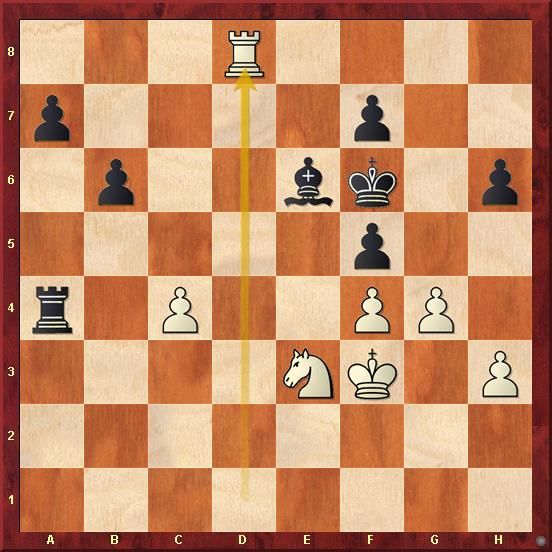 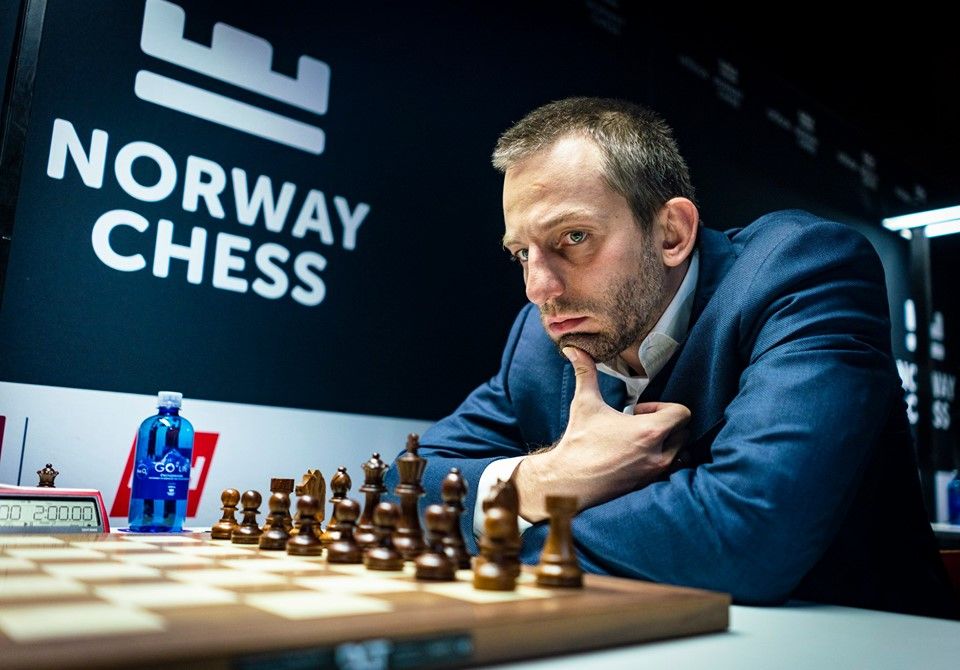 Alexander Grischuk breaks his losing streak. One hopes this is where his comeback starts! | Photo:Norway Chess

Carlsen extends his lead to 1.5 points, over the surprise second place Yu Yangyi. Wesley So and Levon Aronian are close enough, and so are Ding Liren, Anand and Shak. Fabiano, MVL and Sasha have to pray they start winning soon, to have hopes of catching. But for now, it's the Magnus Show!