An intense finale was witnessed at the 9th London Chess Classic last night. After winning a six-hour-long battle against Mickey Adams and a four-game blitz tiebreaker against Ian Nepomniachtchi, Fabiano Caruana was crowned the champion at the London Chess Classic. Magnus Carlsen finished the event on a high note with a win against Levon Aronian in a complicated battle and took the overall Grand Chess Tour winner's trophy. Anand, unfortunately, had a dismal outing on his birthday as he lost the thread of the game yet again and let Wesley So win his first game of the tournament. An illustrated report.

The ninth edition of the London Chess Classic was won by the American GM Fabiano Caruana. After his win against GM Michael Adams in the final round, Caruana successfully caught up with the Russian GM Ian Nepomniachtchi for the first place and then won the blitz tie-breaker to lift the trophy. Overcoming his poor form, Magnus Carlsen won his final round game against Levon Aronian to bag the overall Grand Chess Tour title. 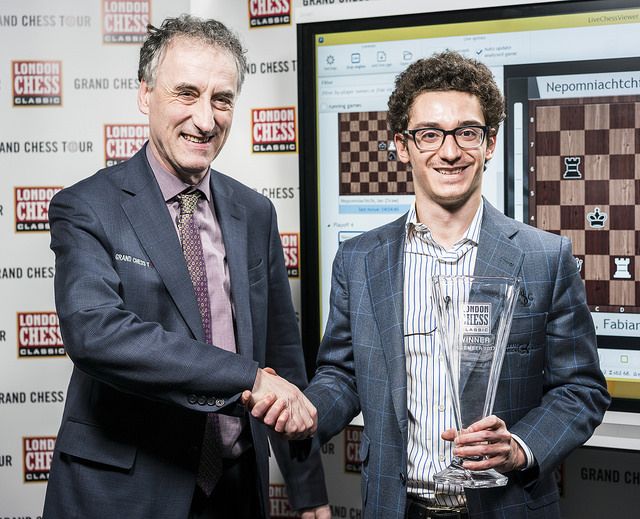 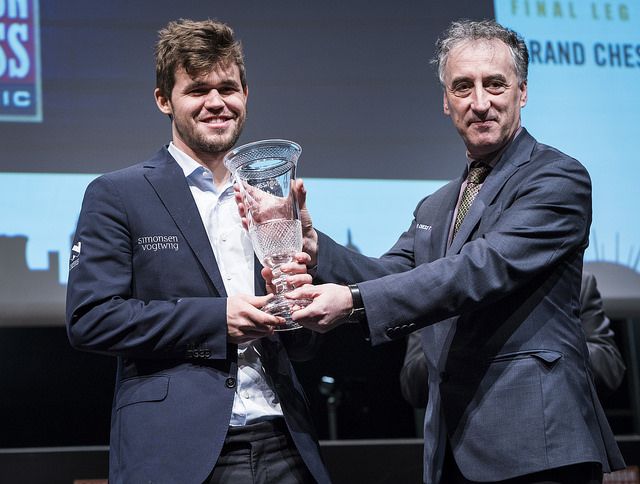 Nobody liked this draw, not even Nepo

Nepomniachtchi had had a brilliant second half at the event winning three back to back games from round 6 to round 8. Before the final round commenced, he was already half-a-point ahead of his nearest and rival, Fabiano Caruana.

The path ahead turned out to be a tough one since his final round opponent, Maxime Vachier-Lagrave, needed to win at all cost to retain his chances for getting ahead of Magnus Carlsen and winning the overall Grand Chess Tour. Also, he himself needed to win in order to ensure he kept Caruana from catching up with him. One solace in this high-pressure situation was that Nepomniachtchi had the white pieces in the final round.

However, the Russian GM opted for a rather laid-back approach. Within less than 30 minutes into the round, he was seen signing the truce with Vachier-Lagrave. In a game lasted merely 19 moves, Nepomniachtchi went straight into one of Vachier-Lagrave’s pet lines in the Symmetrical English Opening and exploited a pin on black’s knight to force a repetition of moves. 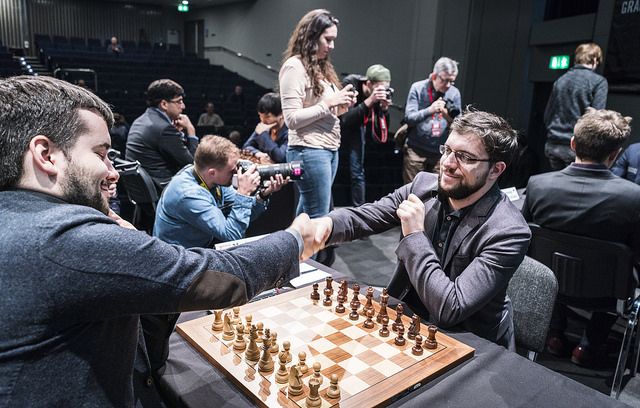 Within less than 30 mins into the final round, Nepo was out of the playing hall | Photo: Lennart Ootes

After the game, Nepomniachtchi said he wasn’t happy about what he did. “When you're half a point ahead, the best strategy is not to lose at least. And of course, I am not very happy with what I did today. I think no one really liked it; me neither,” he said.

He further explained that this was the only strategy he had, saying, “At some point, it could be a long game, which should end in a draw anyway. And then, in case Fabi wins, at least I will have some rest before the tiebreak – at least a bit more rest than him. That's perhaps not the most brilliant strategy, but I didn't have any other."

As for Maxime Vachier-Lagrave, he felt his narrow opening repertoire was to be blamed. “That's the problem with my narrow repertoire. I could play something to create off-balance, but it's not that easy. For instance, let's say if I play the King's Indian, after ...e5, there's dxe5, queen exchange and it's an easy draw. I felt like I should play what I know, and if he forces a draw well then it's bad luck. There's no easy guideline," he said.

Going out in London

Ian’s quick draw gave Fabiano Caruana the chance to force a playoff by winning his game. But his winning chances looked bleak at the start. He did have an extra pawn out of the opening but his tripled pawns in the centre did very little to give him any advantage. But soon afterwards, Adams got a little ambitious and tried pushing for a win. 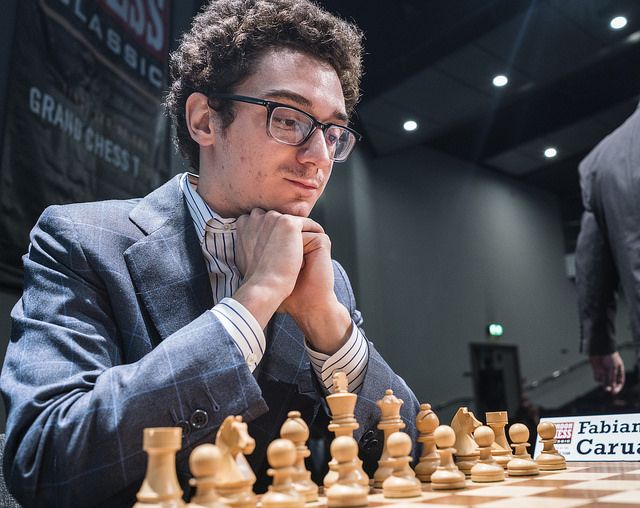 On the 37th move, Caruana came up with a beautiful exchange sacrifice that imprisoned black’s rook and gave the American an extra pawn in the ensuing endgame. Thanks to this, after almost six hours of play, Caruana was able to secure a win and force a tie-break against Nepomniachtchi which he later won with a score of 2.5-1.5. 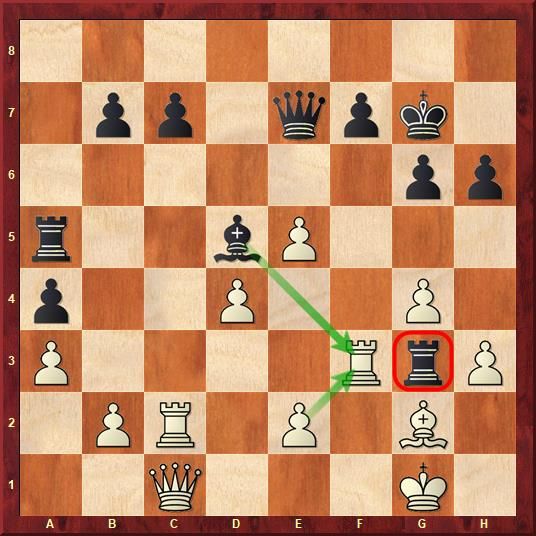 How often do you see a rook trapped like this!

“I will go out tonight. I haven’t really had a chance to see London,” Caruana said, talking about how he will celebrate this win.

Another player who went out last night was Viswanathan Anand, whose 48th birthday had coincided with the final round of the Classic. He was out to do some Christmas shopping and perhaps to get into a festive mood putting his dismal performance at the tournament behind. The final round hadn’t been as pleasant for him. Playing from the white side of an equal-looking Italian, he was systematically outplayed by Wesley So. 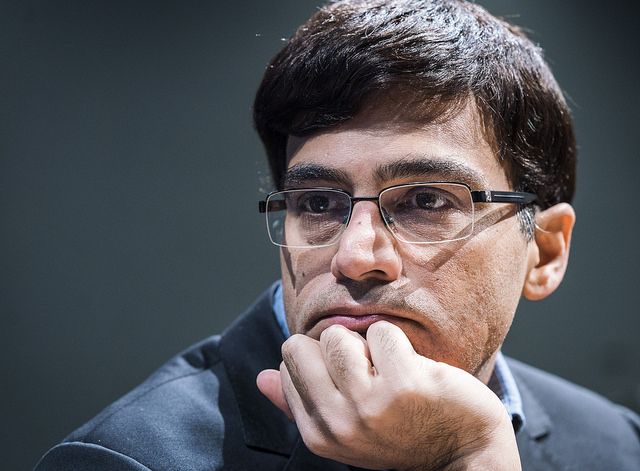 So was able to equalize comfortably out of the opening and soon seized the initiative. By the time endgame was reached, So’s queen and two knights had much more activity than their white counterparts. The position was still objectively equal but the onus of being precise was on Anand. On move 27, Anand lost the thread of the position just like he had previously in the tournament and went down astonishingly fast. 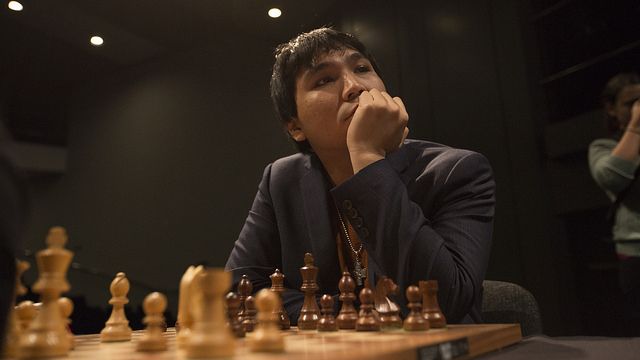 The guy who plays well on his opponents' birthdays | Photo: Spectrum Studios

For So, this was a welcome victory after eight consecutive draws. After the game, he said he wasn’t aware that it was Anand’s birthday but also pointed out that he generally does well against his opponent on their birthdays. He further mentioned that he had also beaten Nakamura last year on his birthday.

One last thrill for Aronian

Magnus Carlsen, who had also had a disappointing result in London, finished off on a high note with his win against Levon Aronian. Both Aronian and Carlsen tried avoiding mainline theory in the game that turned out to be quite a topsy-turvy battle. 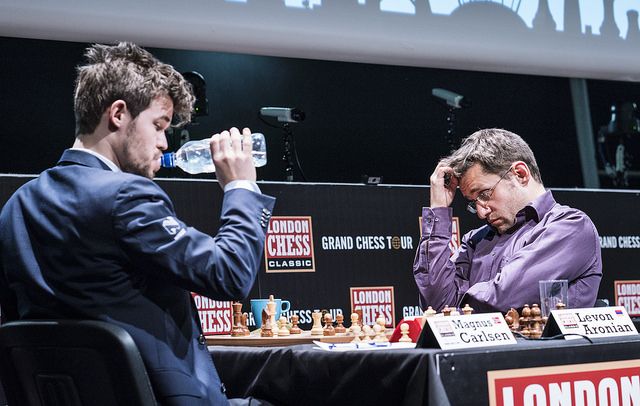 Aronian was the first to get the advantage and tried to “force things at once”. But Carlsen found his way out finding some really difficult defensive moves. As play proceeded, Aronian sacrificed both of his minor pieces to keep his play active and this backfired badly.

“I don’t know what happened with me. I still thought I cannot be worse but of course, I am worse,” Aronian said after the game.

Talking about Aronian’s play, Carlsen said: "He was probably incredibly frustrated that he wasn't winning so he decided not to take the draw when he should have. That was my good fortune in this game." 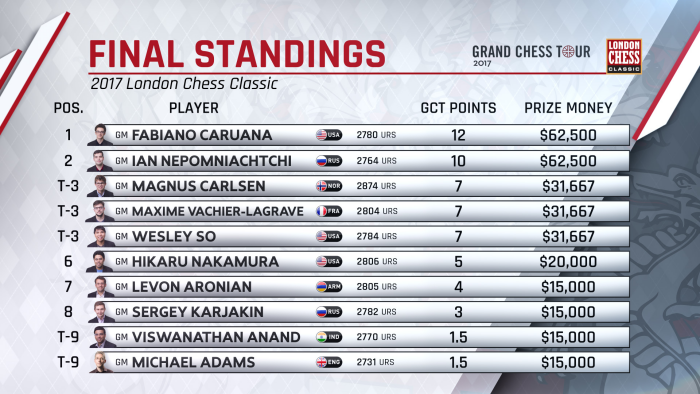 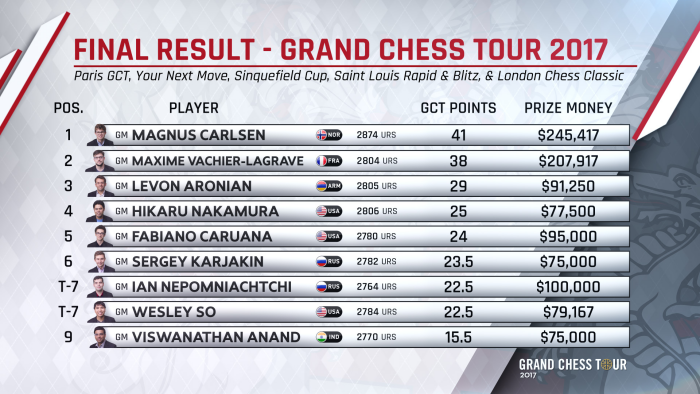