by Aditya Pai - 21/11/2017
Post the seventh round, IM R Praggnanandhaa is heading strongly towards the finish line. While he gave a hint of an Anand-esque element in his play in round 6, in round 7 he left everyone surprised by his decision to repeat moves and go for a draw against GM Alekseenko in a better position. But with four more rounds to go, little Praggna has all chances of making it big at the event. Right behind Praggnanandhaa are three more Indian GMs, namely: Aravindh Chithambaram, Murali Karthikeyan and Shardul Gagare at 5.0/7. A report on round six and seven.

Seven rounds have passed at the World Junior Championship in Tarvisio. After all the action, Norwegian GM Aryan Tari, with a score of 6.0/7, has taken the sole lead. But right under his nose are nine players with a score of 5.5/7. India's torchbearer so far has been the 12-year-old IM R Praggnanandhaa who is not only chasing the title prize but also the GM title that comes along with it. If he succeeds, he will become the youngest GM in the history of the game. But for that to happen, Praggnanandhaa will have to win clear first; a shared first prize will only give him one GM norm. Of course, would be a step ahead in his eventual goal. But isn't achieving the goal altogether far better than inching closer towards it? 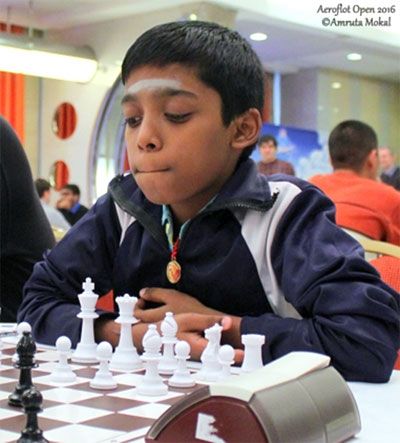 One must appreciate that Praggna is doing all within his might to achieve what he desires. He has had a fantastic start to the event. In the first three rounds, he scored two wins and a draw; in the next two, he beat the tournament's top seed, GM Jorden van Foreest and the highest rated from the Indian contingent, GM SL Narayanan. Both of them were higher rated to him, not to mention, were much older too.

As in rounds four and five, Praggnanandhaa displayed some great maturity and skill in his games from rounds six and seven as well. In round 6, playing against the Chinese GM Xu Xiangyu, the Indian wunderkind ended up in a dull position which didn’t offer many chances to either side. But even in such a bland position, Praggnanandhaa was able to generate complications – a quality the great Vishy Anand is known for. 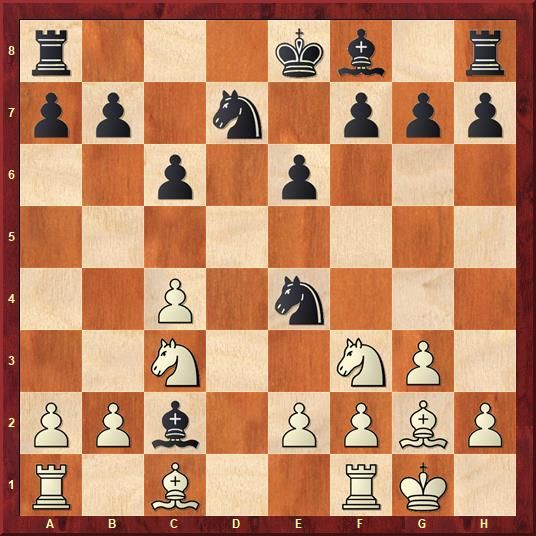 It is quite natural to exchange knights and play the position as white here. But white here was Praggnanandhaa and he wanted to win. So, he came up with an ingenious solution. He played 11.Nd1!

Now that's a move which would have won the heart of GM Ben Finegold (who loves retreating). The idea is simple: white wants to play 12. Ne3 and close the mousetrap for black's light squared bishop with 13.b3. But, in retreating the knight, white also lost a tempo. So, black simply went back with his knight to f6 in response. Praggnanandhaa did not give up yet though. Creating one complication after another, he ended up winning a pawn.

However, the Chinese GM turned out to be a tenacious defender. He also came up with some ingenious moves and in the end, the two signed the truce. Do take a look at IM Sagar Shah's meticulous analysis of the game below.

The seventh round saw Praggnanandhaa draw again. But this time, the game was much more tumultuous for him. With the black pieces, he went for the Delayed Steinitz variation of the Spanish but soon ended up in a worse position. Then on, he was worse for a large part of the game but had been defending hard. But after a few errors by his opponent Kirill Alekseenko, Praggnanandhaa had the better position. However, to the surprise of many, instead of pressing hard for a win, he simply repeated the position and shook hands. This was quite uncharacteristic of him and more importantly, since he could have joined Tari in the lead had he won, there was all the more reason for him to play.

IM Sagar Shah, in his post-game analysis thought, perhaps, Praggnanandhaa decided to go for a draw to end the emotional turbulence that one has to go through in such rollercoaster games. Recalling the Kasparov-Karpov matches, IM Shah mentioned that this is something players do to keep their composure. Do take a look at the full video analysis of the game below. 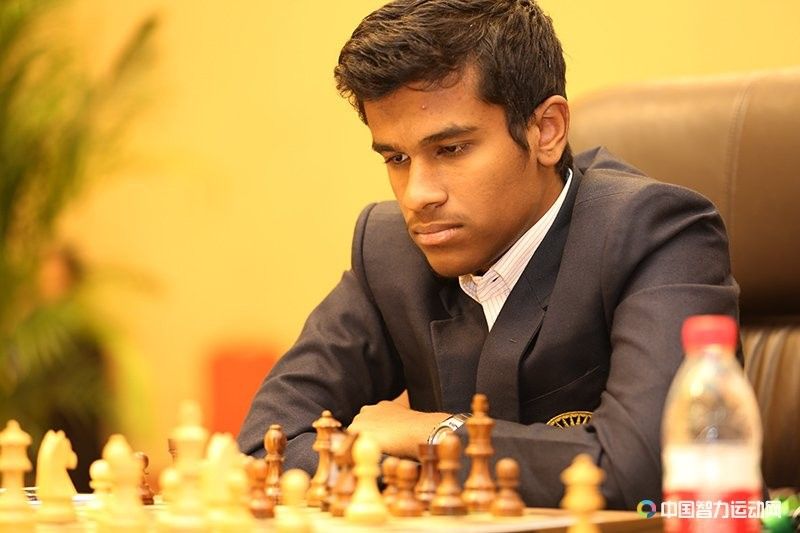 After his loss in the fifth round against Xu Xiangyu, Murali Karthikeyan has come back strongly in rounds six and seven with a win and a draw respectively. He hais current score is 65.0/6. | Photo: cca.imsa.cn 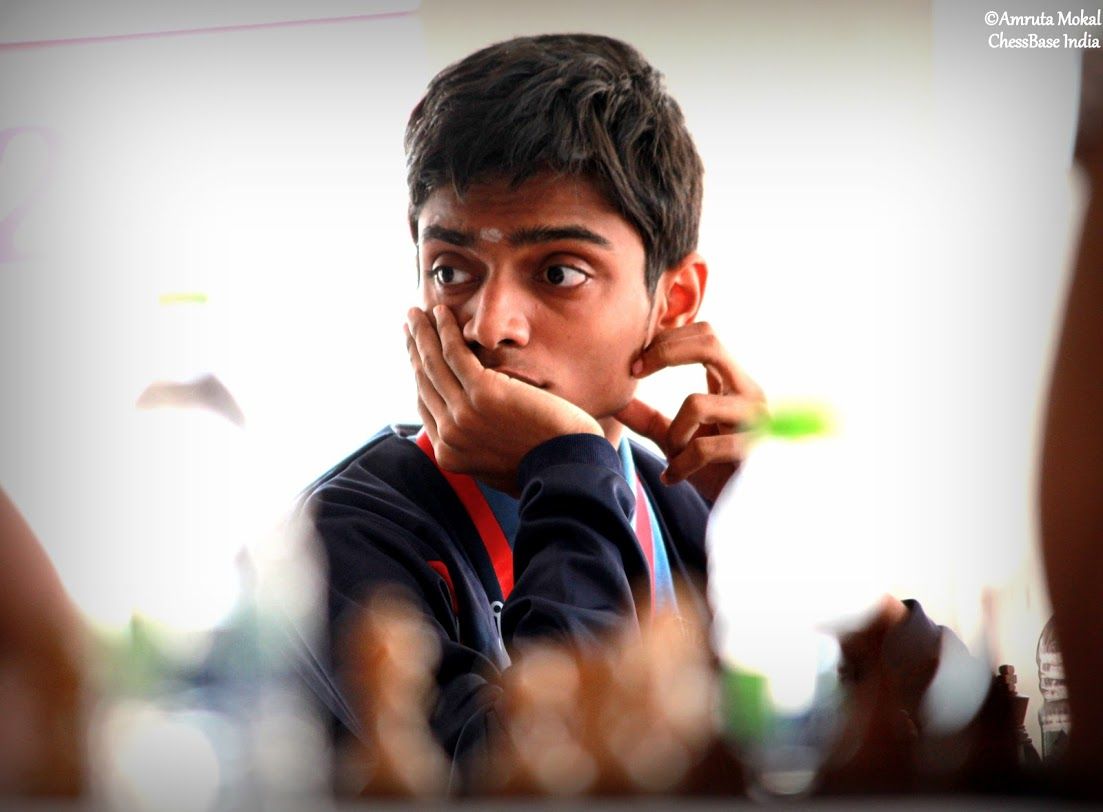 Aravindh Chithambaram is also at 5.50/7 along with... | Photo: Amruta Mokal 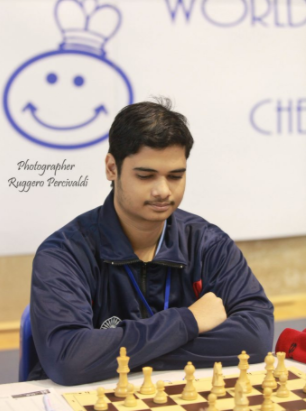 Among the other Indians at the tournament, GM Murali Karthikeyan, GM Aravindh Chithambaram and GM Shardul Gagare are sharing the third place with 5.0/7 with twelve other players.With five more rounds to go and so many players within striking distance from the leader, the tournament is wide open. And, if Praggnanandhaa could continue his great run in the last four rounds, he might just become the youngest Grandmaster in the history of the game!