Nearing halfway stage, the World Junior Championship finally has found a sole leader in GM Kirill Alekseenko with a perfect 5.0/5 score. However, the little Indian star, R Praggnanandhaa is right under his nose with 4.5/5. In the fifth round, Praggna survived a hurricane of an attack by SL Narayanan to emerge victorious. Another Chennai lad in the fray, Aravindh Chithambaram also scored an impressive win over IM Pier Luigi Basso. Round 5 report.

The champs from Chennai won the hearts of the spectators on the fifth day of the World Junior Chess Championship with their exceptional flair in Tarvisio yesterday. While the 12-year-old IM R Praggnanandhaa defended what was nothing short of a monstrous attack by SL Narayanan, GM Aravindh Chithambaram drew blood out of stone in his game against IM Pier Luigi Basso.

SL Narayanan was in the mood to go wild in his game against... | Image: Amruta Mokal 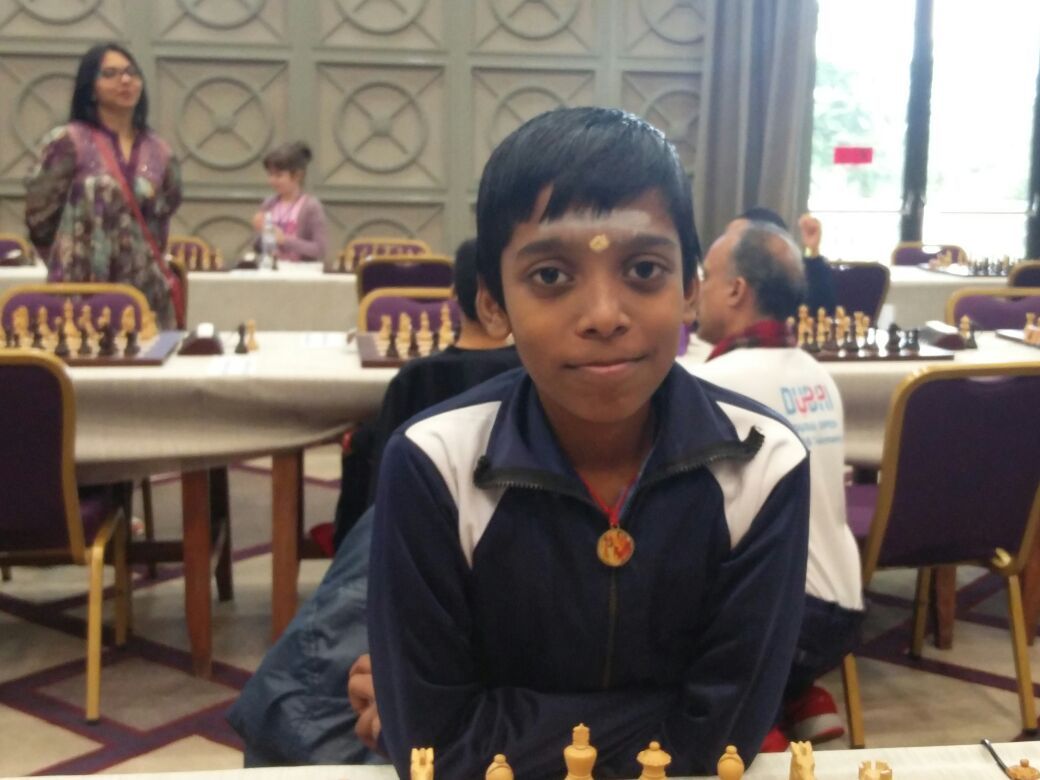 Sunilduth Lyna Narayanan had come to the board with a clear aim yesterday. He wanted to checkmate the black king and was willing to go to any length to achieve that. With the white pieces in the Archangelsk variation of the Spanish Opening, Narayanan sacrificed his knight on g5 early in the game and went on to sack another piece. As compensation, the Kerela boy had a strong attack on Praggnanandhaa's king along with a seemingly unbreakable pin on the f6 knight. 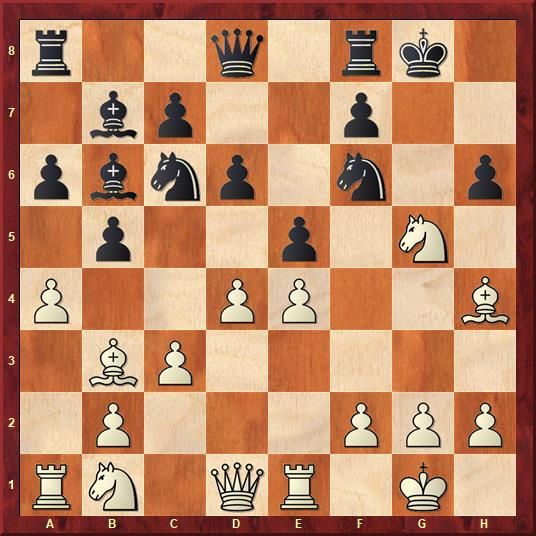 Position after 13.Nxg5
But the knight sac wasn't the only surprise Narayanan had in store for his 12-year-old opponent. A few moves later, he sacrificed another bishop and came up with a novelty that enabled his queen's rook to swing over to the kingside and join the attack on the black king. Matching his opponent's wits, Praggnanandhaa defended tenaciously and returned his some material to get his knight out of the pin. But this was not where the fireworks fizzled. Hell-bent on breaking through to the black king, Narayanan sacrificed another exchange which put him a whole rook down on the material count! 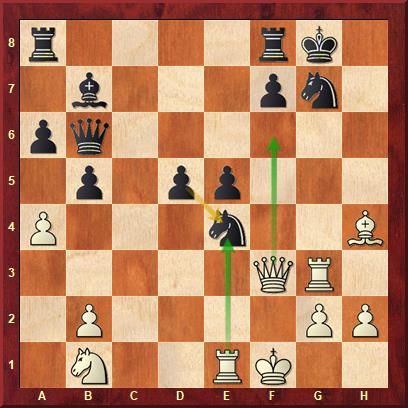 This was, however, only a temporary sacrifice. Just a couple of moves later, Narayanan was able to grab Praggnanandhaa's pinned knight on g7. But this came at a cost -- a queen exchange! Players had now reached an endgame where white was down an exchange. Even though Narayanan tried to continue energetically, Praggnanandhaa's extra material made itself count towards the end. 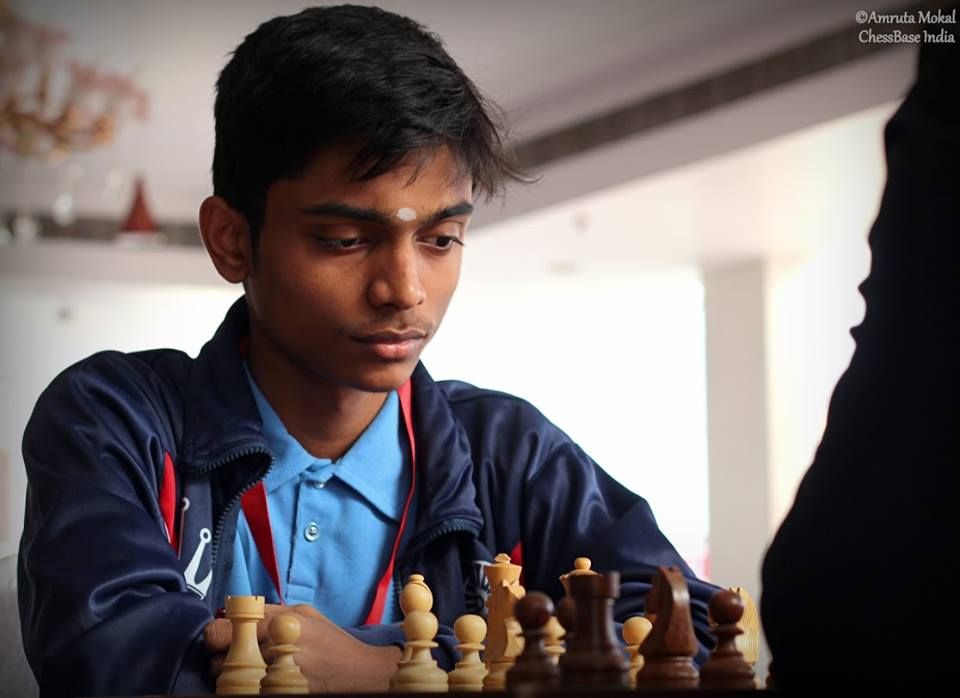 Aravindh Chithambaram is making a splendid comeback after his first round loss. In round 5, he won his fourth game in a row! | Image: Amruta Mokal

Aravindh Chithambaram went for the calm and solid exchange variation of the Queen's Gambit declined in his game against IM Basso. Nothing spectacular happened in the opening or the middlegame. It was all standard play, neither side could really boast of an advantage. Also, pieces were being traded at regular intervals. It seemed the game was cruising towards a draw. 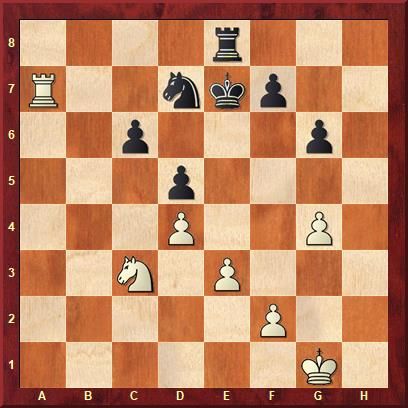 This position was reached after 31 moves of play. It's true that black has a theoretical weakness on c6. But it's hard to believe white could make anything of it. 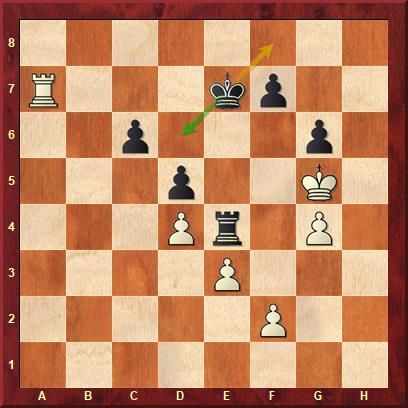 After some back and forth shuttling of pieces, Basso cracked and allowed white's pieces to advance. After 48.Ra7+, Basso went 48...Kf8 and Aravindh seized the opportunity to get his king further into the black camp with 49. Rc7 and 50.Kh6.

Soon white's king and rook gobbled up the f7 pawn and f4-f5, white's the f pawn became a strong passer! What looked like a dead draw had so much more than what appeared at the outset!

After five rounds, Praggnanandhaa is leading the Indian contingent with 4.5/5. On the leaderboard, he is joint second. GM Arvindh Chithambaram is half a point behind him at 4.0/5 and is joint third while GMs Murali Karthikeyan and Shardul Gagare alongwith IM Harsha Bharathakoti are on 3.5/5.