When the King comes forward for the kill

India's 33rd GM Vishnu Prasanna is a prolific trainer. He has trained World's second youngest GM in history GM Gukesh D and also worked with GM Adhiban B, he is also training with GM Surya Sekhar Ganguly. He launched his new official website on 1st May 2020. The website has all the information about Vishnu and it is rich with features. One of the feature of the site is blog where Vishnu himself discusses various themes about chess. In his second blog post, he talked about King Walk, a topic which we are quite familiar about. He discusses some of the lesser known games with his annotations on the theme. Read the article to find out which four games he chose. Photo: Clipart and Shahid Ahmed

Vishnu explains King Walk beautifully using illustrative games
Vishnu's site has a lot of features, blog is one of them where he writes about various themes by himself | Photo: Official site

More than a hundred years have passed since Steinitz formulated his Theory of Positional play. Chess has really evolved and come a long way since then. Even Steinitz started off as an attacking player before formulating his positional rules. He always held true to his statement and idea that "The king is an attacking piece". Those were the times of Gambits and sacrifices but modern chess is more "Prophylactic" and restrictive in Nature. Eyebrows are raised when you see a King’s Gambit being played in an elite event these days, but it was probably the most popular opening during the time of Steinitz. He played a lot of games in which he quickly lost his right to castle (not very accurately at times) and played aggressively with his king in the centre. Chess has changed a lot since then and consequently so have the openings. Although you will see today that even modern players' Kings take a walk at the centre of the board and a hundred years since still manage to get away with it.

The first position is from the game Tomi Nyback – Anish Giri 2010. The Dutch GM who is currently a member of World Elite had a modest 2588 at the time this game was played. 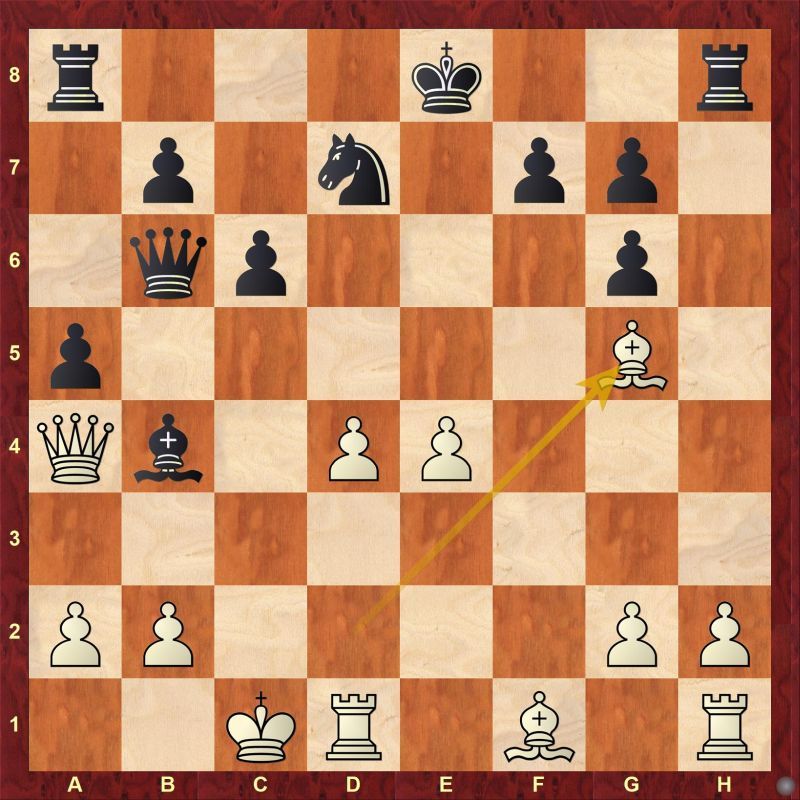 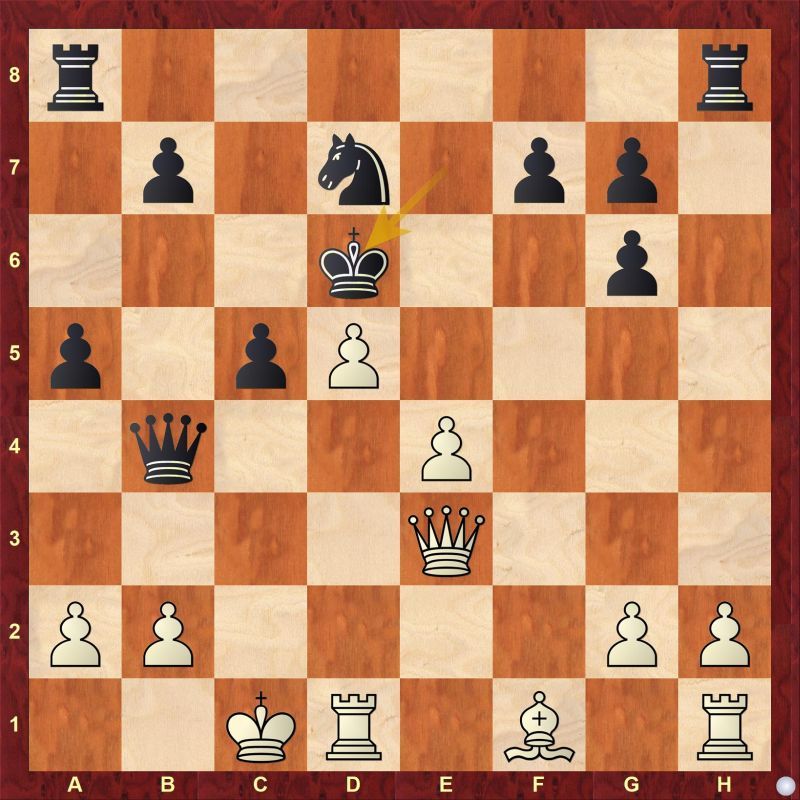 The black king marches forward without hesitation or fear. After this White is unable to form a clear plan, and gets easily outplayed by Black. 22.a3 Qa4 23.Rd3 b5 24.Rc3 Rhc8 25.Be2 Ne5 26.Kd2 b4. Ironically it was white’s king that came under a strong attack and white lost in a few moves.

In the next position White has some extra space in the position, but he still has to make some real improvements to his position to claim an advantage. 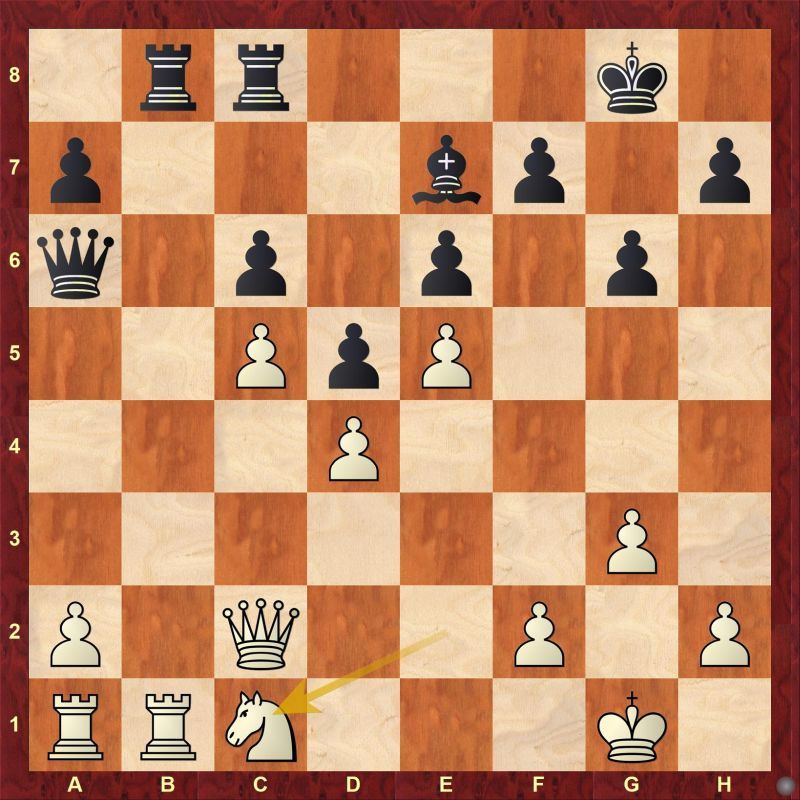 White has just played 20.Nc1 improving its position from e2 with ideas Nd3-b4 and Qd3. Black naively went 20...Bg5?! It is not immediately obvious why this move is bad. Black wants to force white to play f4 and hopes the slightly open king would give him more opportunities for counterplay but you will see the game only benefits white. (The direct 20...Bd8 was definitely better) 21.f4! Bd8 and now comes black’s real surprise 22.Kf2! Ba5 23.Ke3!! Supporting d4 and preparing both Qd3 and Nd3 as necessary. 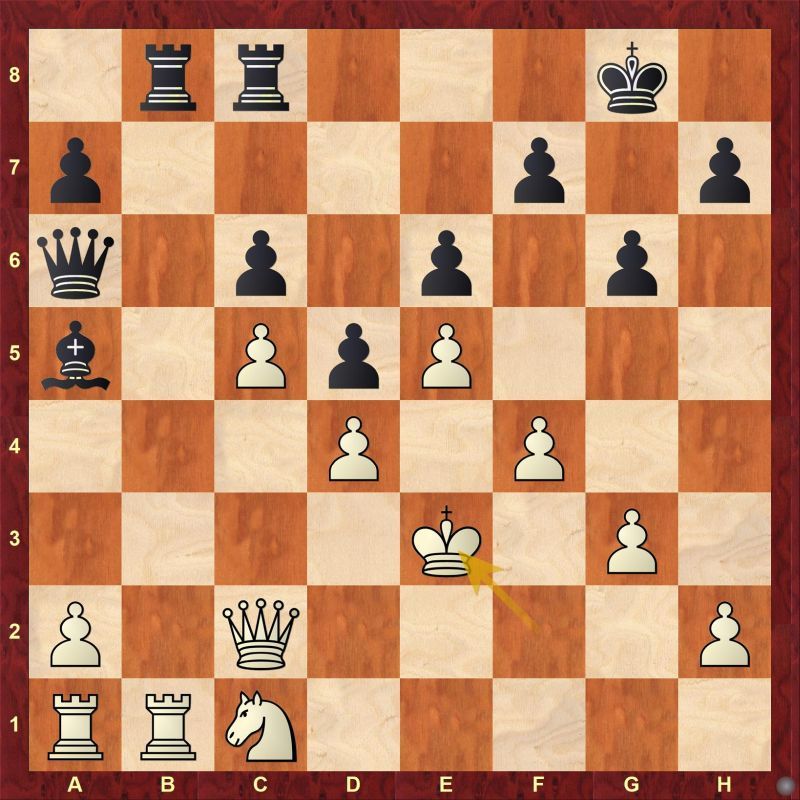 A strong king march to the centre! Black’s dubious 21st move has helped white achieve this. White has managed to improve his position considerably in the last few moves and the surprise of the king march had a negative psychological effect on Black.

23...Qf1!? Black tries to “punish” white for his overzealous play. Although it was already hard to recommend something for Black except maybe (23...Kg7 24.Qd3 Qc4!? But such decisions are hard to make on the board especially when it’s not clear if it’s equal.) 24. Nd3 Qh3 the queen could not do much here. After 25.Rb3! White comfortably took over the position in a few moves and won.

The first game that one thinks of when considering king marches is the renowned Short-Timman in Tilburg 1991. The English grandmaster has also another king march to his credit although lesser known, definitely impressive. 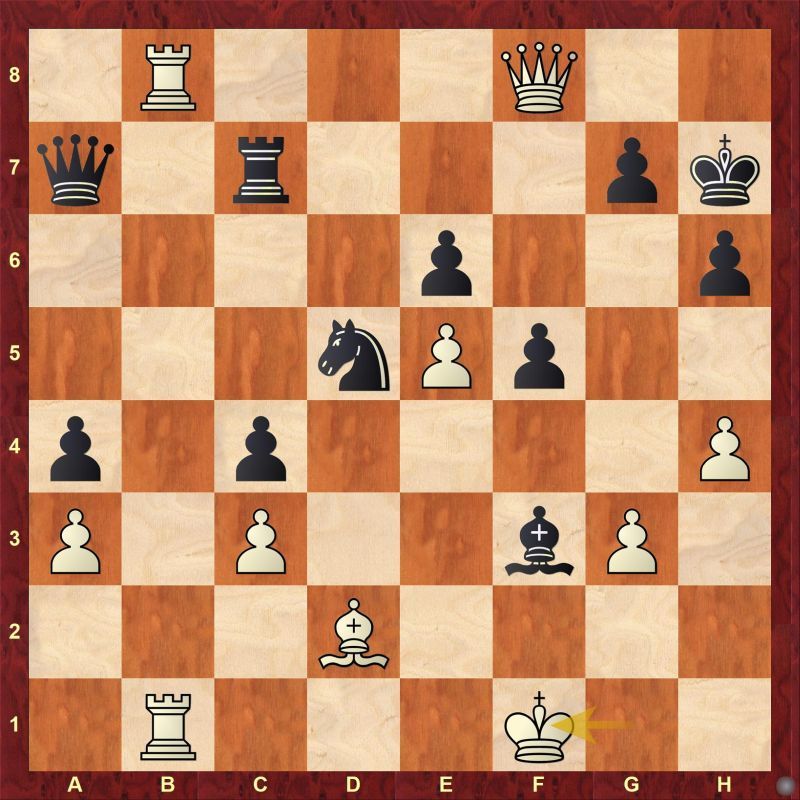 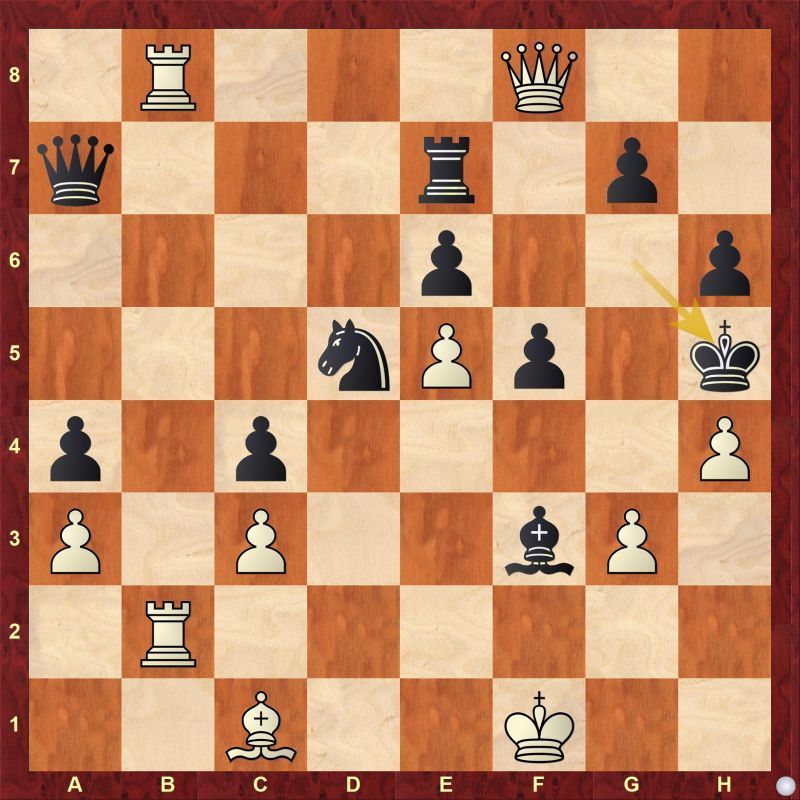 My own experience with King march was rather unconvincing but more dramatic. The game was played right after I had become a Grandmaster. After being outplayed in a sharp fight I set up a last trap with the move 29.Nf3!? 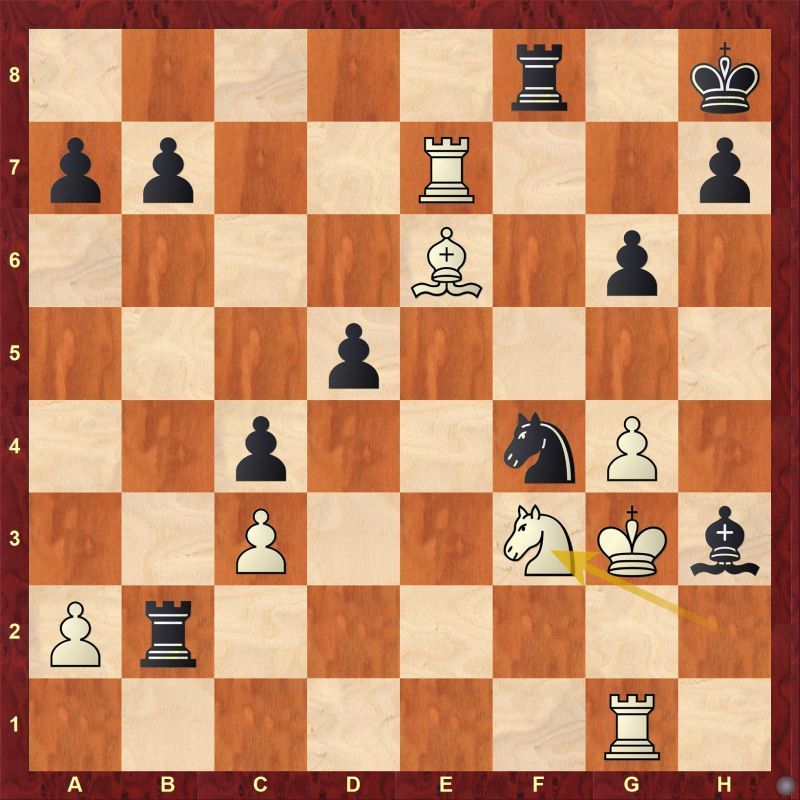 My opponent confidently responded with the accurate 29...Ne2+! and after 30.Kh4 the king march begins. 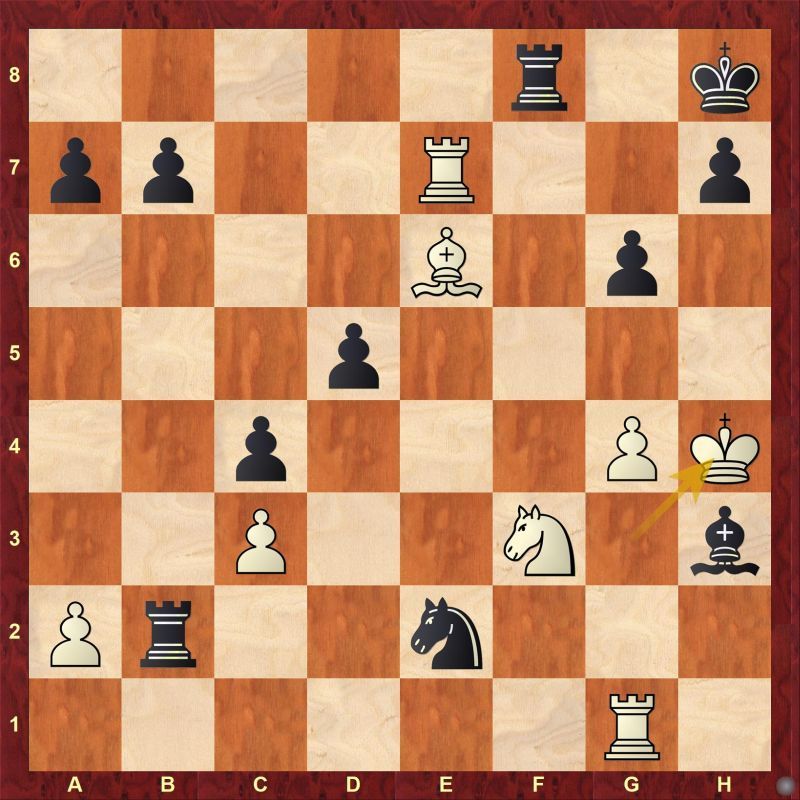 At this point a move like h6 halting the king with the puny soldier would have given the point to black but fortunately for me my opponent did not see the impending danger and took on f3. After 31.Kg5! Mate suddenly seems unstoppable. 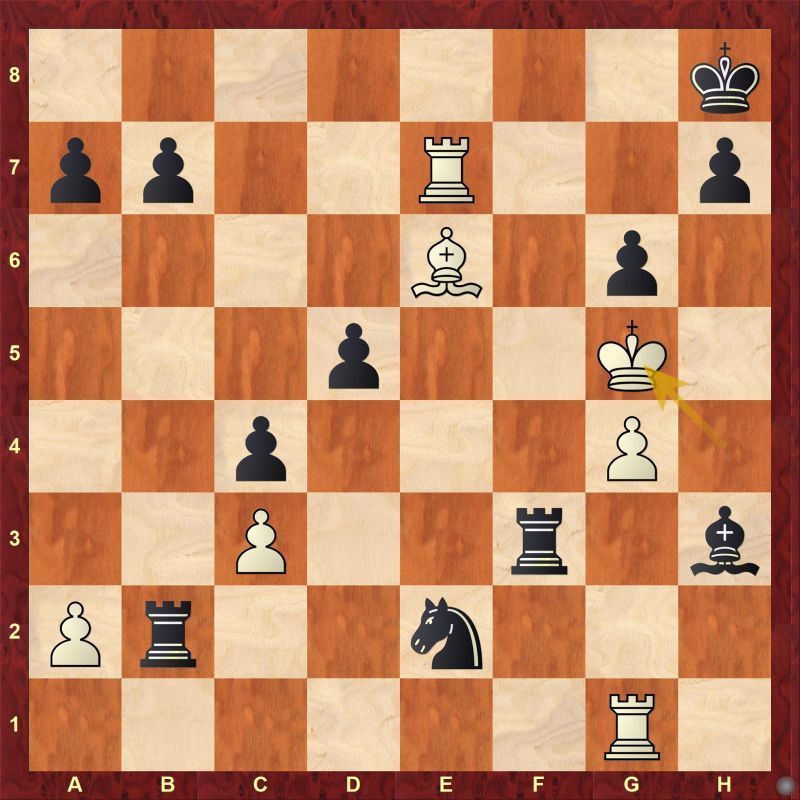 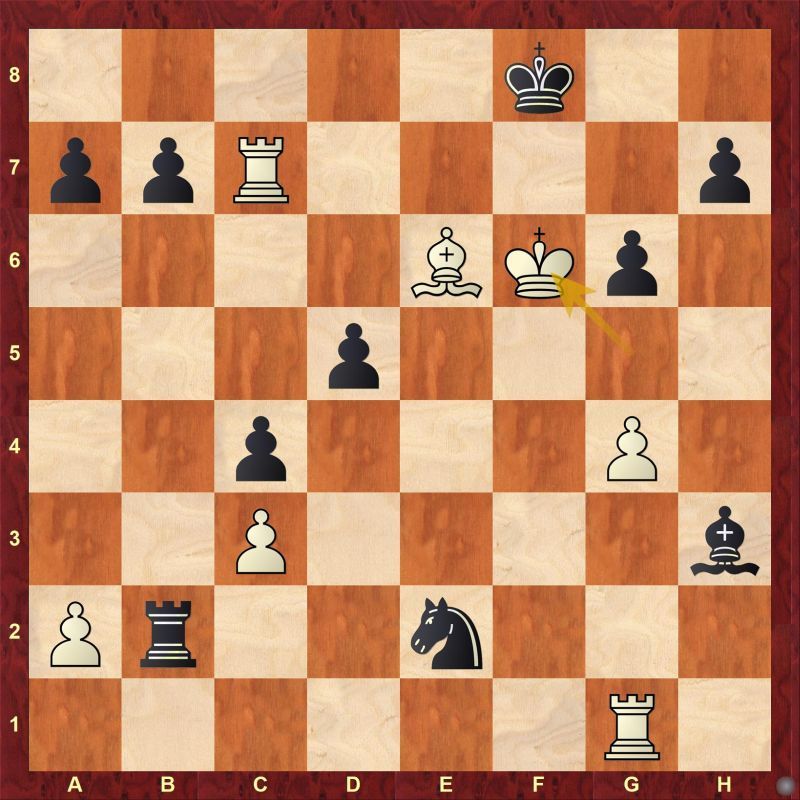 The game is more of a tragicomedy and I was happy to be on the funny side of it.

I have always been fascinated by exceptions in chess and of the lot, king moves are my favourite. Who wouldn’t be excited to see a king boldly marching down the board in an active Middlegame. 100 years since king marches have evolved wonderfully and are still very much alive. 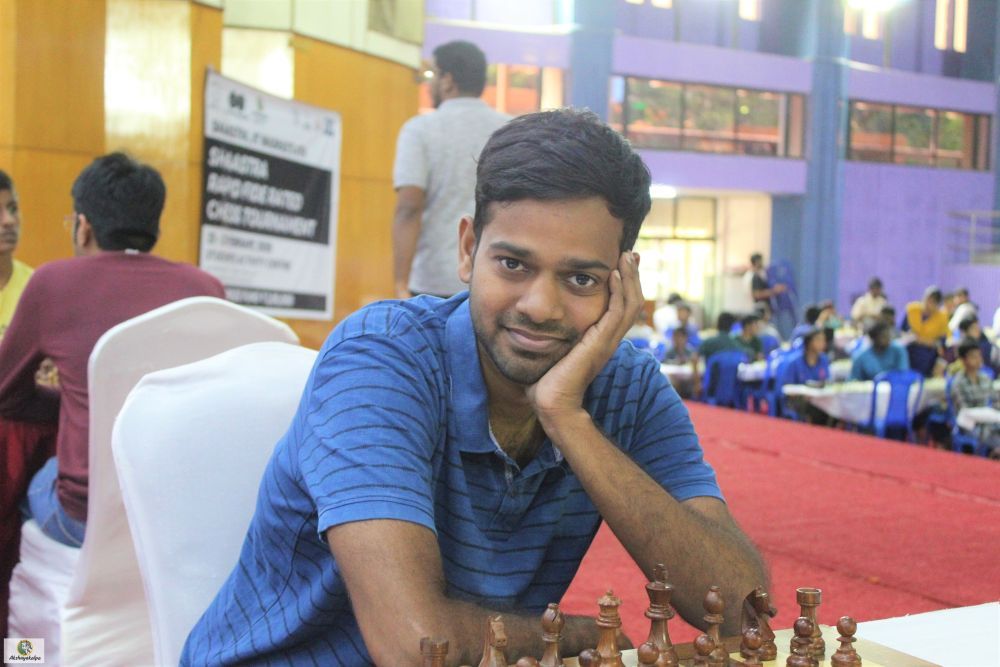 Vishnu Prasanna is the 33rd GM of India. He has been coaching professional chess players since 2016. He has organized numerous individual, group and online camps attended by hundreds of Indian and International chess players till date. He has trained the second youngest GM in the world D Gukesh. He is training with GM Surya Sekhar Ganguly. He has also worked with GM Adhiban B as a second for his debut at Wijk aan Zee, where he finished 3rd. Other prominent students include IM Leon Mendonca, IM Rathanvel, WGM V Varshini, WIM K Priyanka among many others.