Samriddhaa Ghosh had an unexpected start with a loss against her state mate in the opening round. However she made a perfect comeback and won the tournament despite never being in the lead. At the conclusion of round 6, she was trailing behind a full point and she had a color break. Even when things were looking bleak, she kept believing in herself to win her maiden national title after coming close to a podium finish multiple finish. Samriddhaa won State under-17 in her final attempt and 44 days later she became national champion. She won the state title in less than a week after coming close to winning state women for the second consecutive girl. Photo: Shahid Ahmed

Samriddhaa writes her own destiny

If you have to look for a perfect comeback story or to find inspiration about not taking a loss to your heart and always believe in your abilities, look no further than newly crowned National under-17 girls champion Samriddhaa Ghosh. 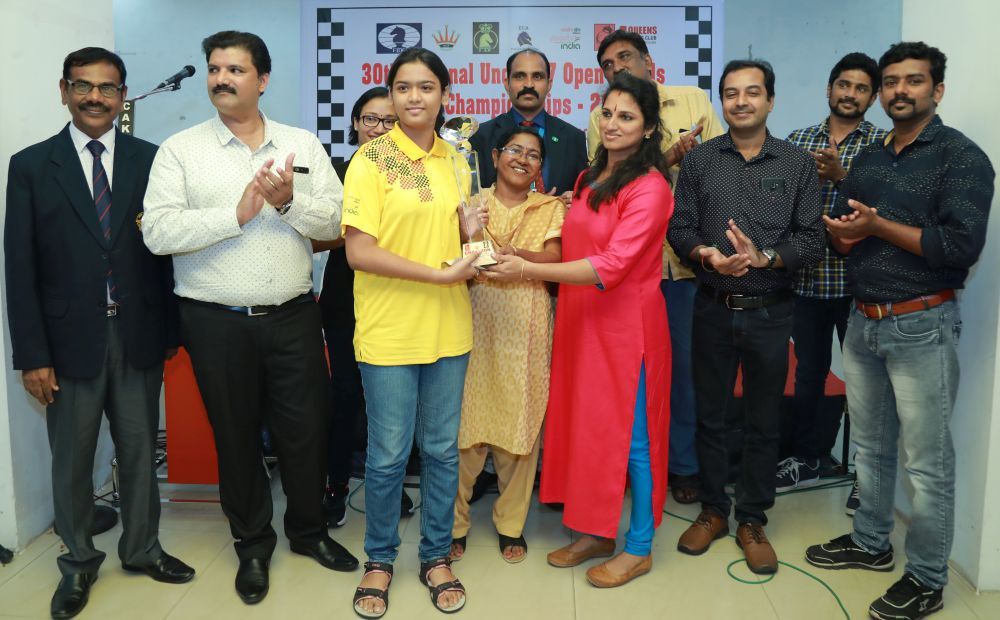 An interview was conducted after Samriddhaa returned to her hometown Kolkata

Samriddhaa talks about how she believed in herself despite losing the first round | Video: Shahid Ahmed

Here is the transcript of the interview:

Shahid Ahmed (SA): Congratulations Samriddhaa for winning National under-17 girls. How did it feel to win the tournament?

Samriddhaa Ghosh (SG): Thank you. I am feeling very happy. It's my first national title.

SA: You started the tournament with a loss, then you made a strong comeback and won the tournament. What was going through your mind after losing the first round? 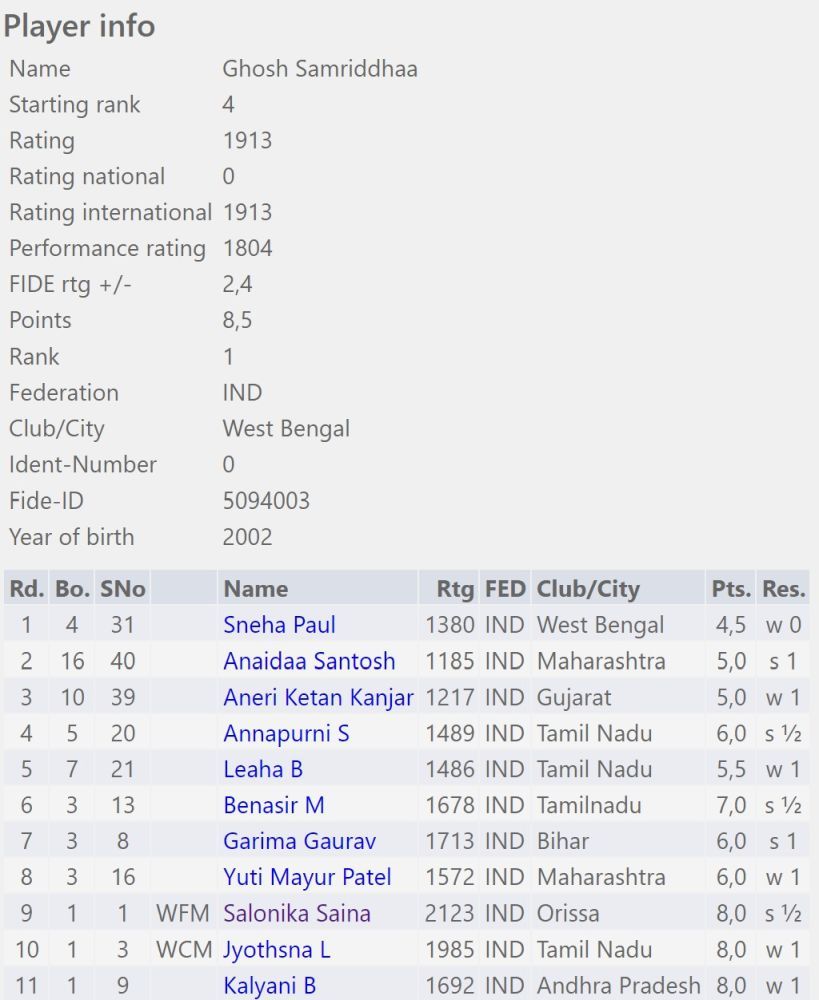 Samriddhaa's performance at National under-17 girls

SG: Actually after the losing the first round I thought that maybe I still gave some chances. I believed in myself that I can make a comeback.

SA: You had a color break in the middle of the tournament which allowed you to get two whites in the last two rounds, did you think that you were extremely lucky?

SA: Who gave you the toughest resistance in the entire tournament?

SG: I think my first round opponent. Even though I had a better position but still I lost.

SA: Which was the best game from the tournament?

SG: I guess the last round win only.

SA: Who congratulated you first after winning the tournament?

SA: What did your parents tell you about winning the tournament?

SG: They were very happy.

SA: You have come close to a podium finish multiple times, so what does this championship mean to you?

SG: This time I was able to not only get into top 3 but to win the championship, it feels really good.

SG: Next, mostly I will play World Junior.

SA: Thank you Samriddhaa for speaking with ChessBase India, I wish you all the best in your future endeavors.

Here is an annotated game by the champion Samriddhaa herself:

Before this interview, Samriddhaa arrived immediately after leading her school team to another victory in an inter school team championship. If you are wondering what she did after the interview got over, then here you go -

Samriddhaa was found to go for Yoga practice with the other students of Alekhine Chess Club | Photo: Shahid Ahmed

We also caught up with Samriddhaa's father Tushar Kanti Ghosh and asked him a few questions.

Shahid Ahmed (SA): How does it feel to know that your daughter won her first National title?

Tushar Kanti Ghosh (TKG): I feel delighted that she won the National title for the very first time. She has also won Silver medal in Commonwealth and Asian Youth before but missed the Gold. Naturally, finally when she won the championship this time, I was extremely happy. To be honest, I was quite upset after her first round loss. She was out of form in the last few months for whatever reason. By winning this championship, her confidence will increase. I hope she will feel motivated to do well in the upcoming tournaments.

Currently she is studying in class 12. Next year she will appear for her CBSE board exams. It is becoming difficult for her to balance to both chess and studies. She gets into a bit of pressure as she has to balance to both academics and chess practice. I feel fantastic that she is still managing it quite well.

SA: How did you react after she lost the first round?

TKG: I felt bad because she was not supposed to lose but I believed in her to regain her position. I told her, "Don't worry about the loss, just think that the round 1 starts from tomorrow." I gave her the much needed confidence. I was here in Kolkata, her mother was with her at the venue. She played brilliantly in the last three rounds. I was a bit tensed during her final round as her opponent was leading by a half point ahead. I told her, "Don't worry about anything else. Just go for a win." Later we can calculate everything else.

SA: Few moments ago you said that Samriddhaa did not have a good year so far but she had won State under-17 girls few days ago... 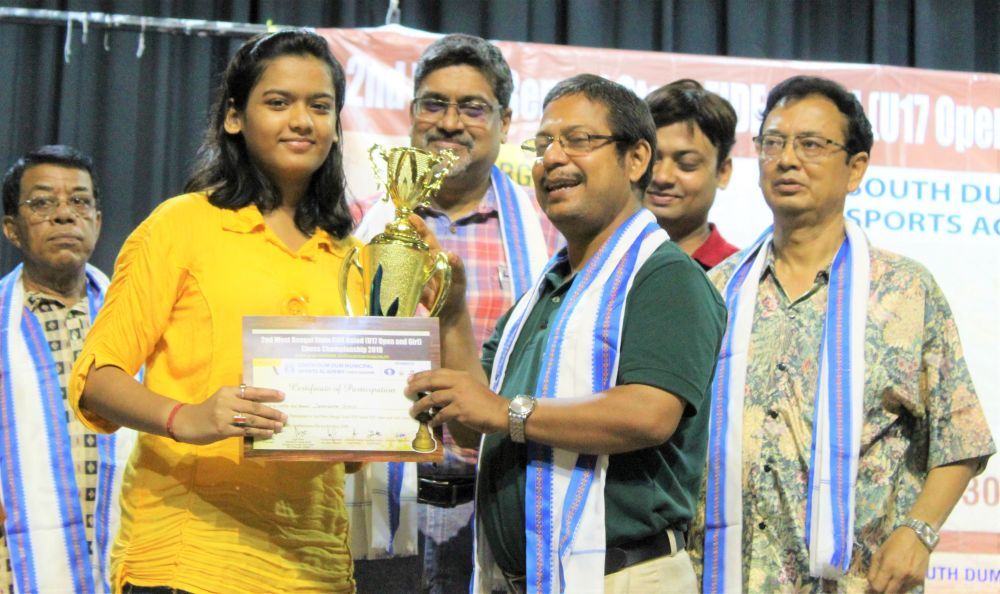 TKG: Except this tournament, if we consider the rest of the year, she performed less than what I expected. Even I questioned her, "Why are you playing terribly", she was a bit demoralized. Even I myself was a Volleyball player, when I played bad, I was also criticized. So I understand that every player goes through some downtime before hitting their stride. She performed well in the National Women's Premier too.

Her school Shri Shikshayatan cooperates a lot in terms of leave and her playing tournaments. In the beginning it was not like this. Principal used to say that we have only one criteria, education. They said that we only consider first position. Then I said, "If everyone finishes first, who will become 2nd and 3rd then?", then the principal remained with her stand of first position being the most important.

After she performed well in various open, school tournaments, CBSE tournaments where she won individual Gold last year, she had also won CBSE team championship before. Then the school started realizing her efforts and took chess seriously. 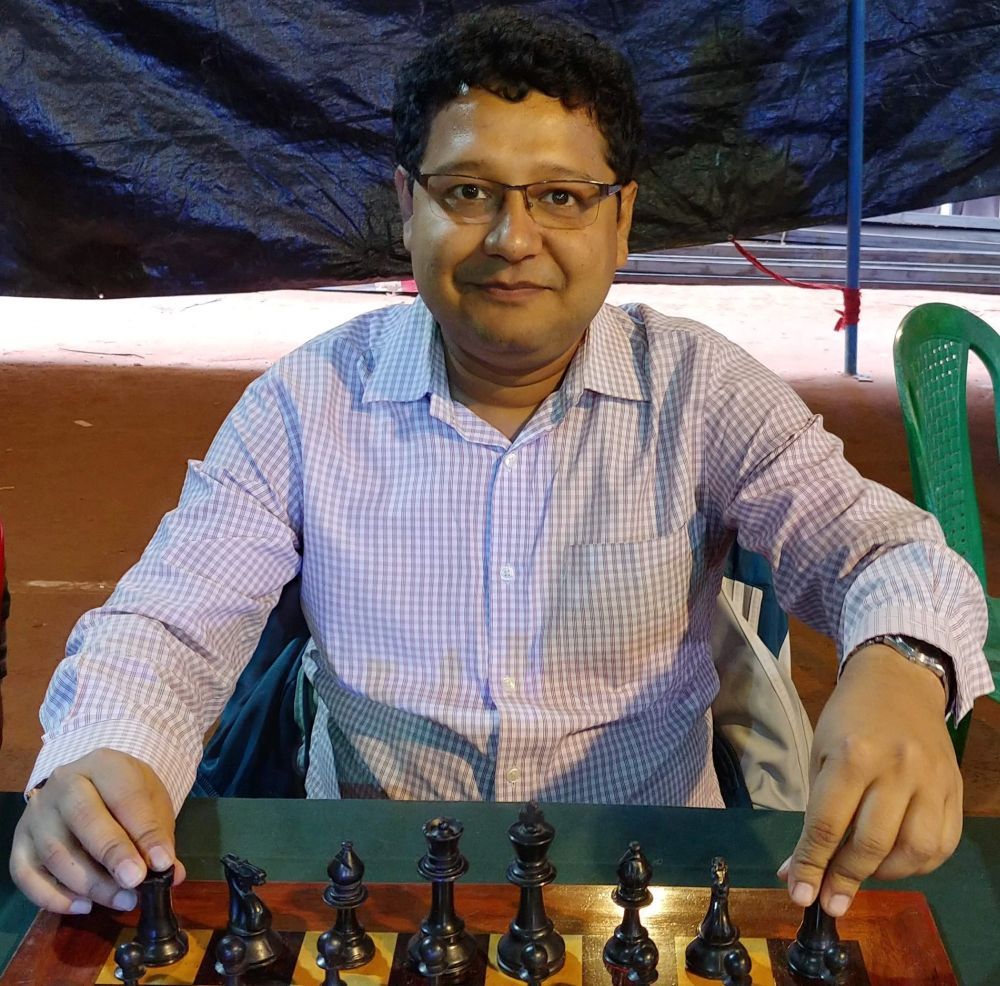 GM-elect Arghyadip Das sent his message from Netherlands while playing in a tournament | Photo: Shahid Ahmed

IM Arghyadip Das: I was happy for the result but not surprised. She is talented and hard-working and this result was bound to come. Of course there were some ups and down (even in this National) but she kept her nerve cool and did not panic.

After the tournament I congratulated her and told her to keep working hard as now she will be representing India in various tournaments. And it will be much tougher than Nationals. 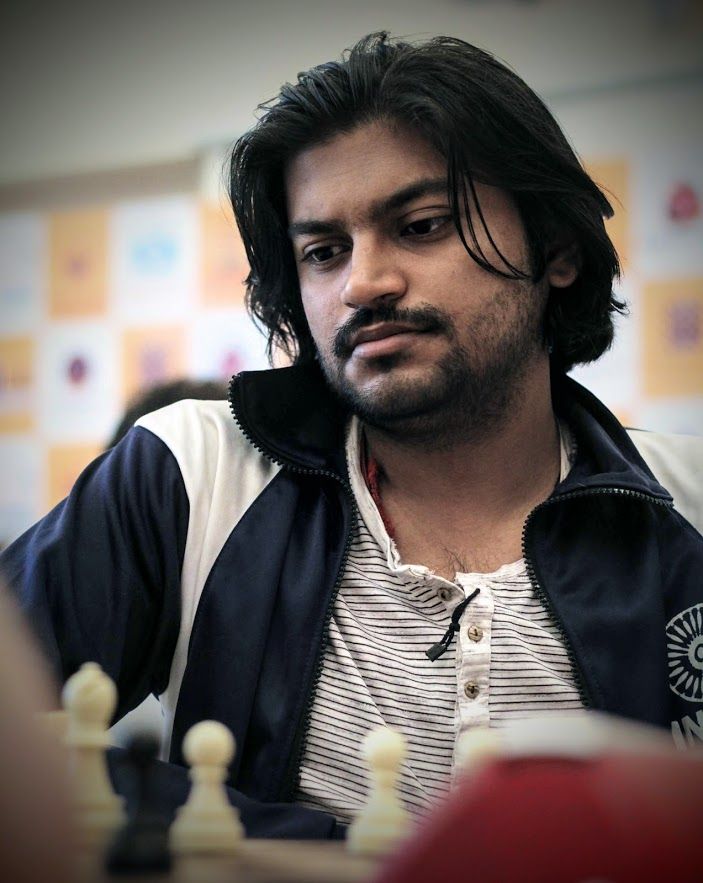 Besides playing and teaching chess, Niranjan also likes to read and write too | Photo: Amruta Mokal

FM Niranjan Navalgund: Ah yes! That felt unique. Just prior to her event, I shared my experience of winning the national under-17, 2011 in one of our sessions. The interesting part was she also got 8.5 points. I am happy for her. I got a call from her after she had won, I addressed her as a national champion and also reminded her that this had opened doors to Asian and World, and that there are many more things to accomplish.

And then I let her enjoy the moment and celebrate as the first national title is always special and memorable!