PSPB stays ahead of the pack as they maintain a perfect Match Point in both Open and Women's category after the conclusion of 6th and 4th round respectively. Both Adhiban and Ganguly won both of their games to ensure PSPB wins each round emphatically. GM Sriram Jha of LIC, had to succumb to two draws in the 5th and 6th round today against two untitled players, Kaustuv Kundu of Bengal Chess-B and Baivab Mishra of Odisha-A. AAI jumped to the second spot after they whitewashed both Bengal Chess-A and Odisha-KIIT in consecutive rounds and LIC jumped to the third spot after they won both of their rounds. Among Women, AAI jumped to second position after Tamil Nadu lost to them 1-3 and LIC jumped to the third spot as Odisha MCF-5 lost by 1-3 score, making top 3 standings in both Open and Women's category exactly the same after the conclusion of round 6 in Open and round 4 in Women's category. We bring you games, analysis and photos. 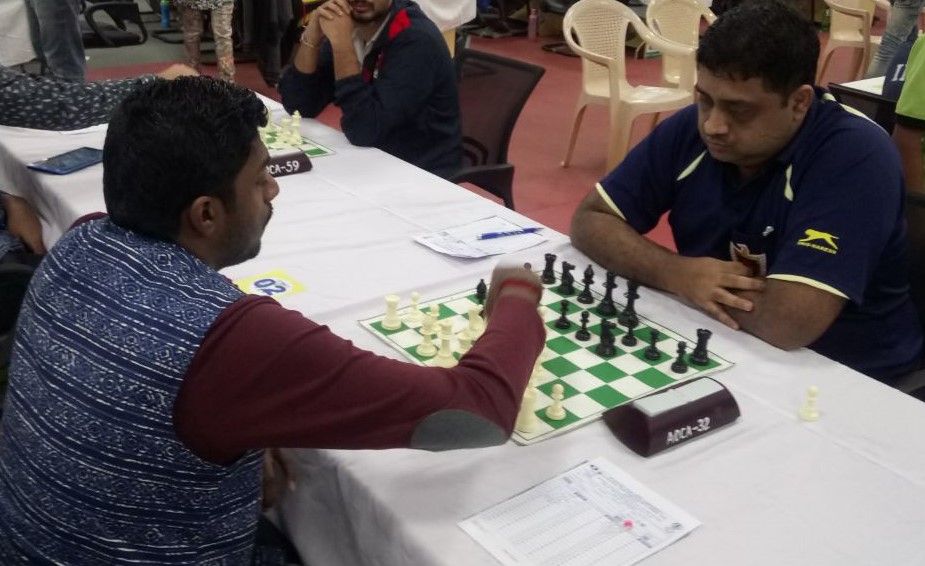 IM Arghyadip Das despite getting an exchange up, GM Murali Karthikeyan defended it well 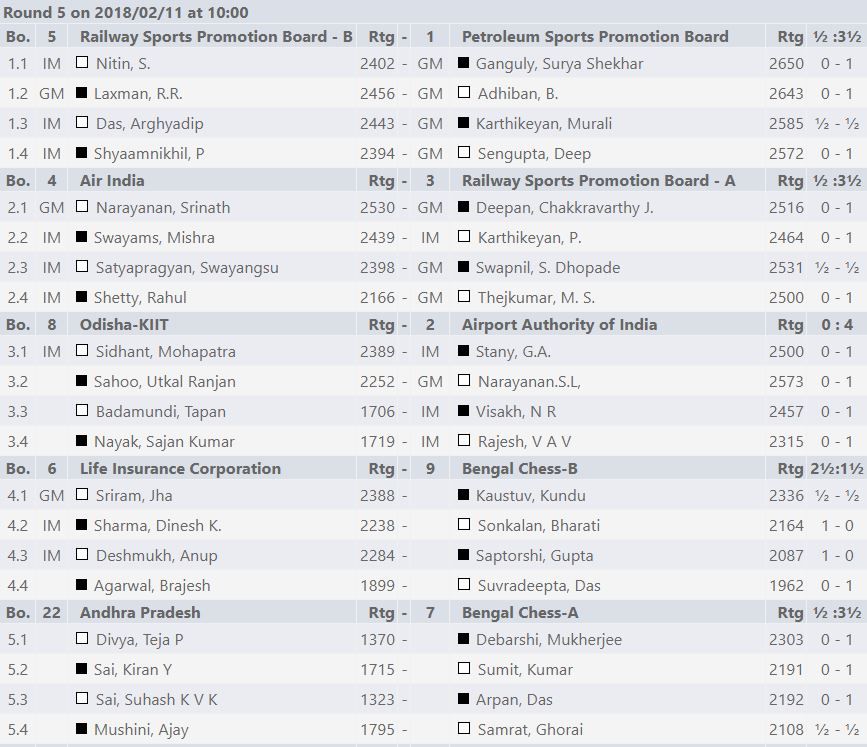 Results of round 5 in open category 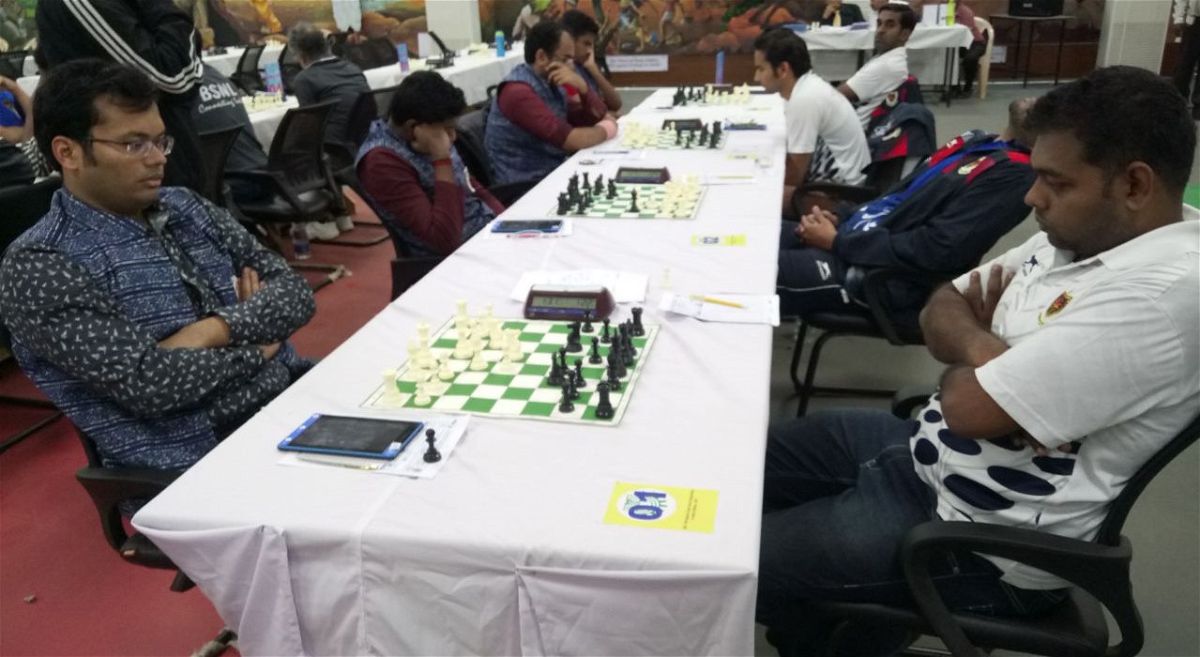 GM Surya Sekhar Ganguly played in a swashbuckling style when he sacrificed his Bishop for three pawns when he played 13.Bxd4 in Sicilian Taimanov and made his intentions clear. 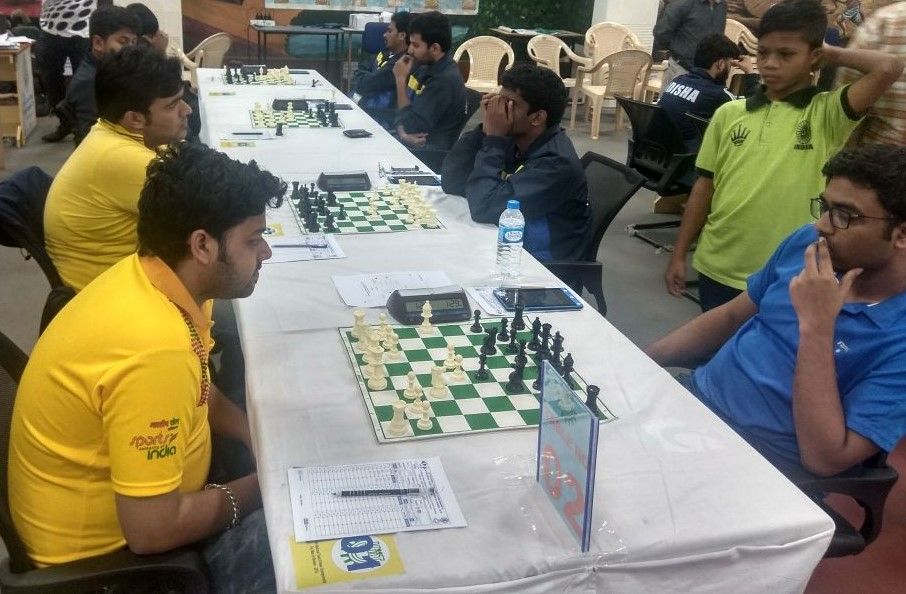 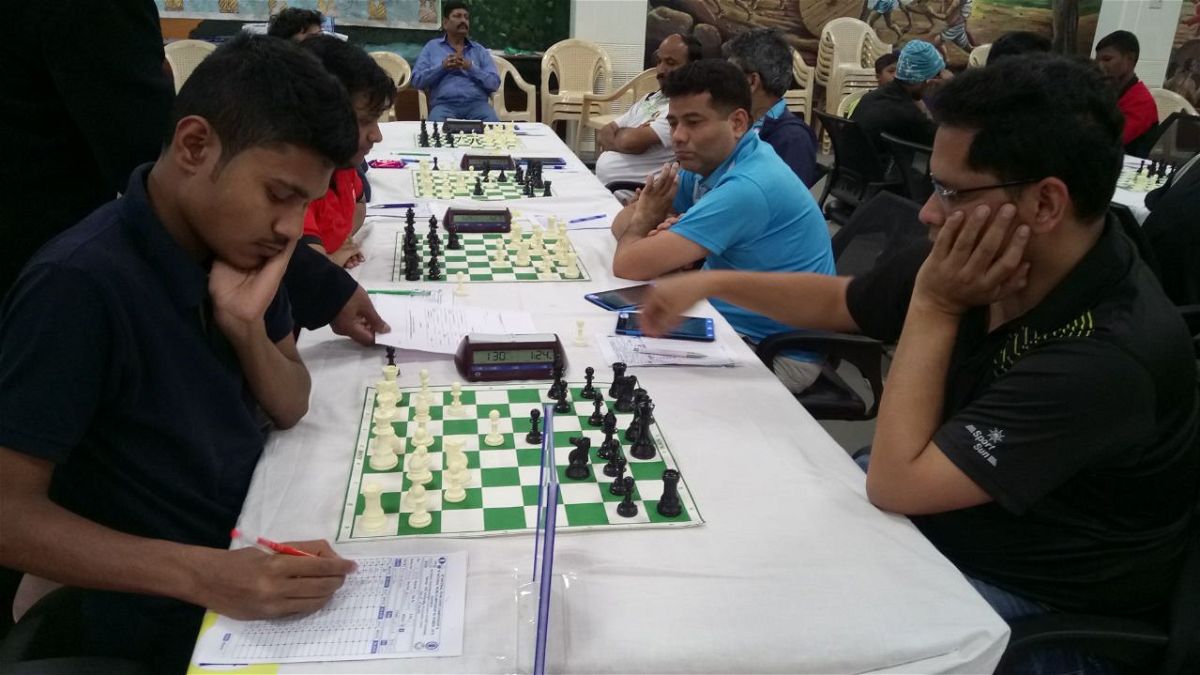 Baivab Mishra became the only player to score as he drew with GM Sriram Jha and team Odisha-A went down 0.5-3.5 against Team LIC

Baivab played a marathon game of 119 moves in a prolonged Rook and Pawn endgame of 75 moves, before both players agreed to draw due to a threefold repetition. 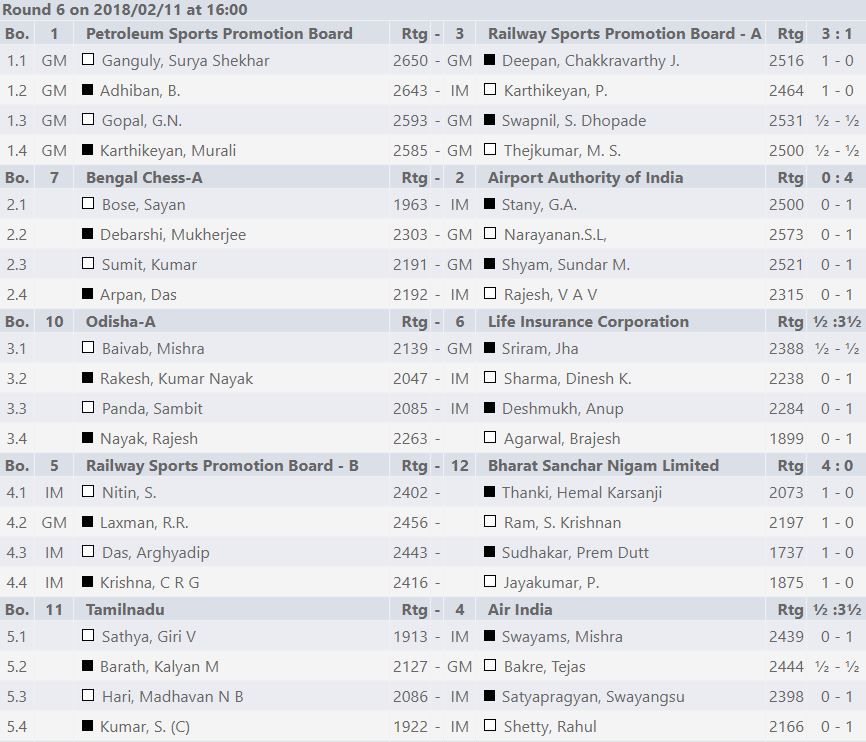 Results of round 6 in open category 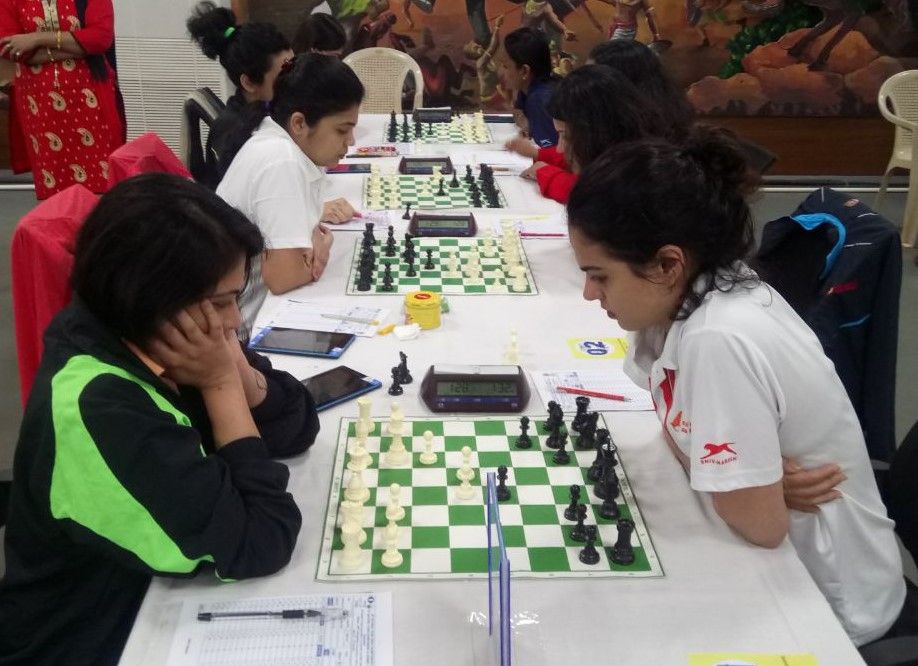 IM Eesha Karavade of PSPB got away with a draw as IM Tania Sachdev missed a couple of opportunities to maintain clear advantage and keep winning chances alive.

WGM Soumya Swaminathan of PSPB got a clear advantage in the middle game but she missed 23...Rb8 which would have given her a decisive advantage against WGM Bhakti Kulkarni of Air India. However a few mistakes in the endgame allowed Bhakti to gain an upper hand but Soumya fought back and saved the game.

IM Padmini Rout played an attacking game against IM Subbaraman Vijayalakshmi in Sicilian Kalashnikov variation and gained a Bishop in move no.35 and wrapped up the entire game in the next 10 moves.

WGM Subbaraman Meenakshi of Air India went wrong in Colle System against IM Nisha Mohota of PSPB and eventually Nisha went into a favorable opposite color bishop ending which she converted to a win. 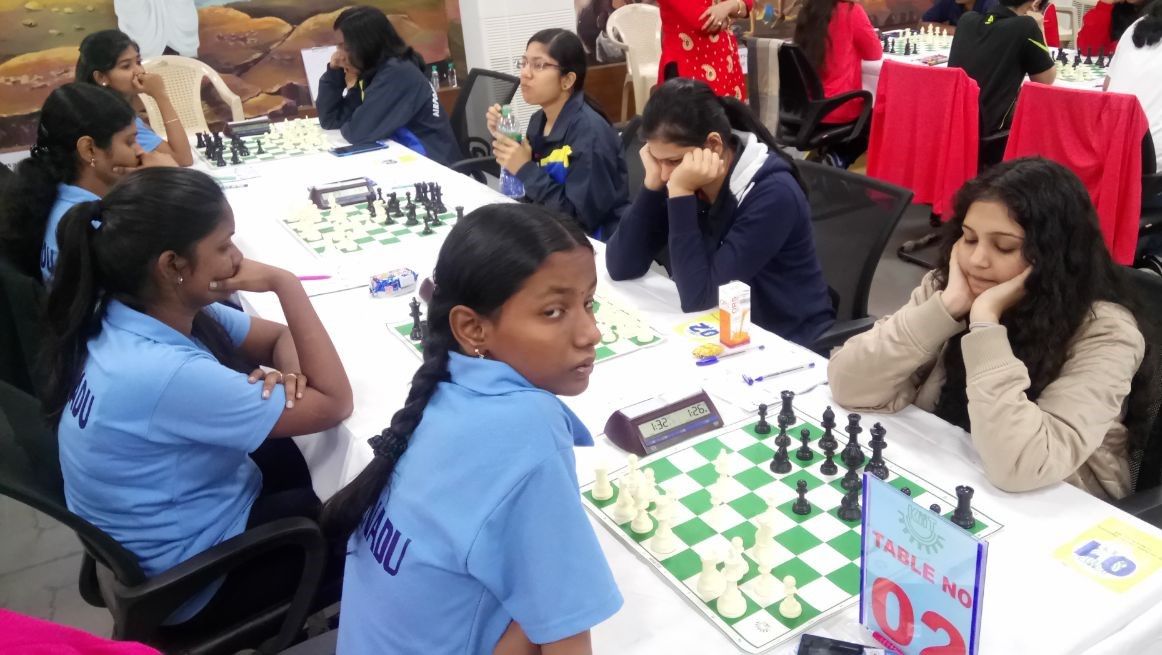 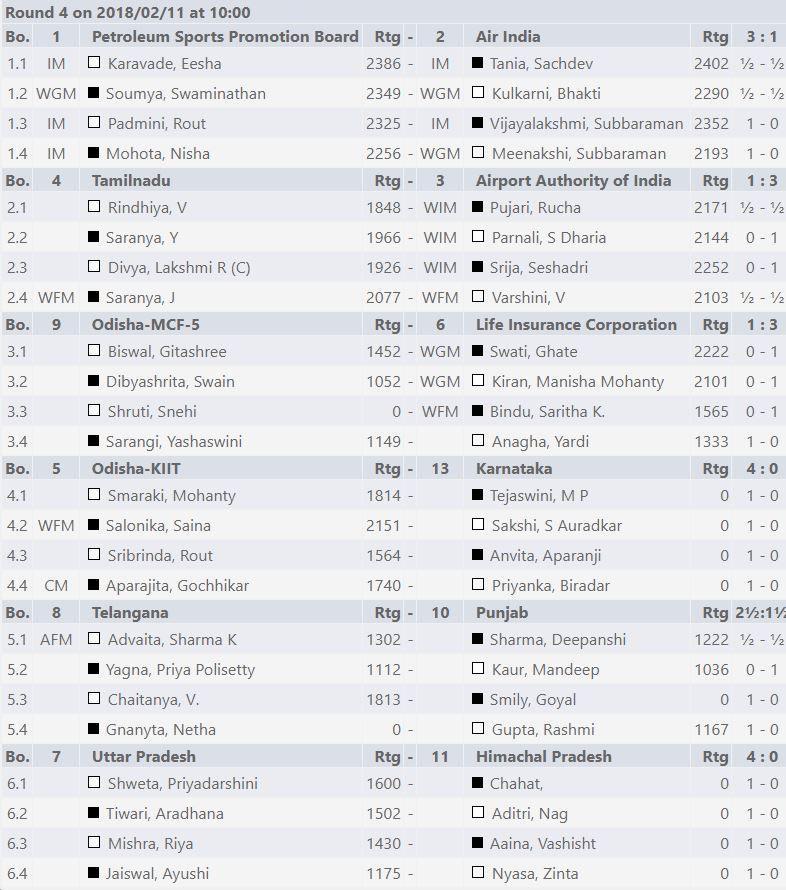 Results of round 5 in women's category