Hoogeveen 06: Adhiban goes down in the playoffs

After his sensational comeback in round five, Adhiban Baskaran drew his final game against Jorden van Foreest to enter into a blitz playoff. On the other board, Wei Yi scored his first win against Ivanchuk and forced a playoff. Interestingly, both the classical and blitz legs of the match ended with the same result on both boards (3-3 and 2-0). But unfortunately, in Adhiban's match, it was Jorden van Foreest who won both blitz games to take the title while Ivanchuk was the victor in his match against Wei.

Adhiban Baskaran and Jorden van Foreest had exchanged quite a few blows before going into the final game of their match in Hoogeveen. Every game, except the first one, had ended decisively. But in the final round, it ended just as it had started as the players agreed to a draw, letting a blitz tie-break decide the fate of the match. 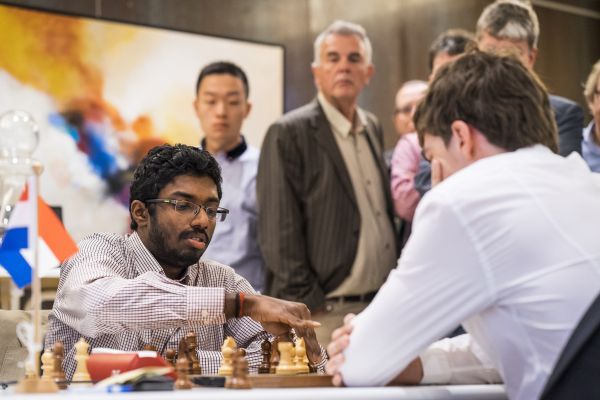 For the third time in a row, in game six, Adhiban countered van Foreest’s 1.e4 with the Italian. But, this time, with a difference. Instead of the 6.d6 line, he went with 5.O-O and 6 d5 which is a more direct way of approaching the position.| Photo: Lennart Ootes

Van Foreest, too, had a small surprise up his sleeve. On the 10th move, instead of playing it cool with 10.Nbd2, he went for the more audacious b4-b5 pawn push in the centre and eventually gobbled a pawn on e5. But Adhiban reacted well and countered the Dutchman’s attempts to generate play on the kingside and centre by exchanging his knight for van Foreest’s light-squared bishop and then harvesting the weak pawns that were left behind. By move 33, Adhiban had recovered his pawn while van Foreest found a rook exchange that led to a forced repetition of moves.

With scores tied at 3-3, the players went into a two-game blitz playoff with a time control of 3 minutes plus 2 seconds increment from the first move. Adhiban had the black pieces in the first game and was pushed to the back foot after an overextension on the queenside in a London System. Once he had the initiative, van Foreest’s knights began to tango all over the board. Soon, his pawns also plunged in both on the kingside and in the centre. In order to curb white’s initiative, Adhiban decided to sac a piece. But this did not really help his case and the Indian had to resign soon after. 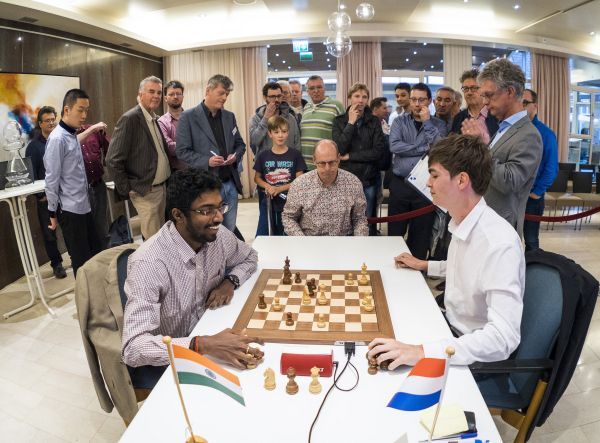 Now a point ahead, it seemed van Foreest was in the mood for some pawn fishing. Or perhaps, his nerves were failing him badly. First, his queen went wandering to a2, having gobbled a pawn on b3 and then, even his knight also couldn’t resist the temptation of munching on the c3 pawn on the 24th move. Incredibly, the knight was en prise there and even Adhiban ignored capturing it! What’s even more curious is that Adhiban could have won on the spot a couple of moves later but went for a dubious exchange sacrifice and spoiled his advantage. Van Foreest regrouped well after this and forced resignation in a few moves. 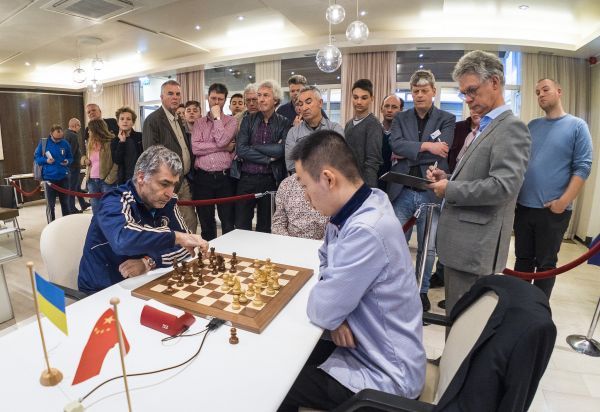 On the other board, Wei Yi crashed through to Vassily Ivanchuk’s king to level scores and dragged the world rapid champion into the blitz playoff. | Photo: Lennart Ootes

Needing only a draw to clinch the match, Ivanchuk had resorted to the e6 Sicilian yet again. But some misplay gave Wei the chance to manoeuvre his pieces breakthrough on the kingside. After the game, Wei pointed out that Vassily should have tried 22…Nf6 instead of 22…f5 which allowed white’s queen and bishop to crash in. Even though the players were pretty evenly matched in classical games, the blitz playoff painted a totally different picture. 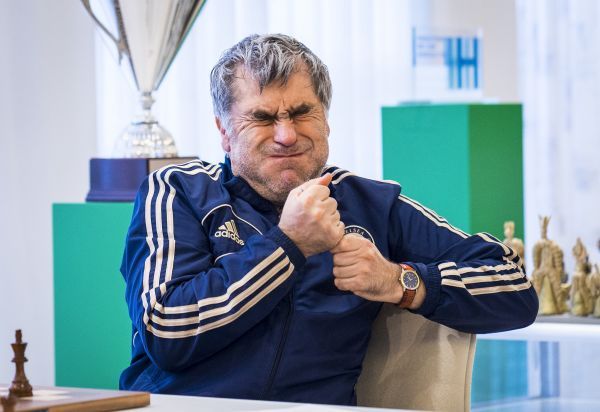 Wei was able to win a pawn from the black side of a Nimzo-Indian in the first game. But soon things began going south for him as Ivanchuk’s pieces came rushing in through the centre. This made Wei consume a lot of time on his clock and eventually left him a pawn down in a lost position. Ivanchuk took his time converting this one but there was never really a doubt about the game’s outcome.

In the final game, Wei Yi went down without a fight after Ivanchuk played the central break 14…e5 in the Scandinavian. Maybe it was the match situation or perhaps Wei was just tired as he blundered and lost a piece. In just 18 moves, ‘Chucky’ won the game, and with it the match.