Sethuraman played two excellent rapid games against Harikrishna Pentala to advance to round three of the World Cup 2017. This is the second strong opponent that Sethu has beaten in this event, the first one being Ponomariov. Adhiban gave Nepo a huge scare and was winning the first game comfortably. However, he made an error and finally lost the match. This means that we have only two Indians left at the World Cup 2017. Vidit will face Ding Liren while Sethu will be up against Anish Giri. Report on round two tiebreaks with analysis by 13-year-old Prithu Gupta. 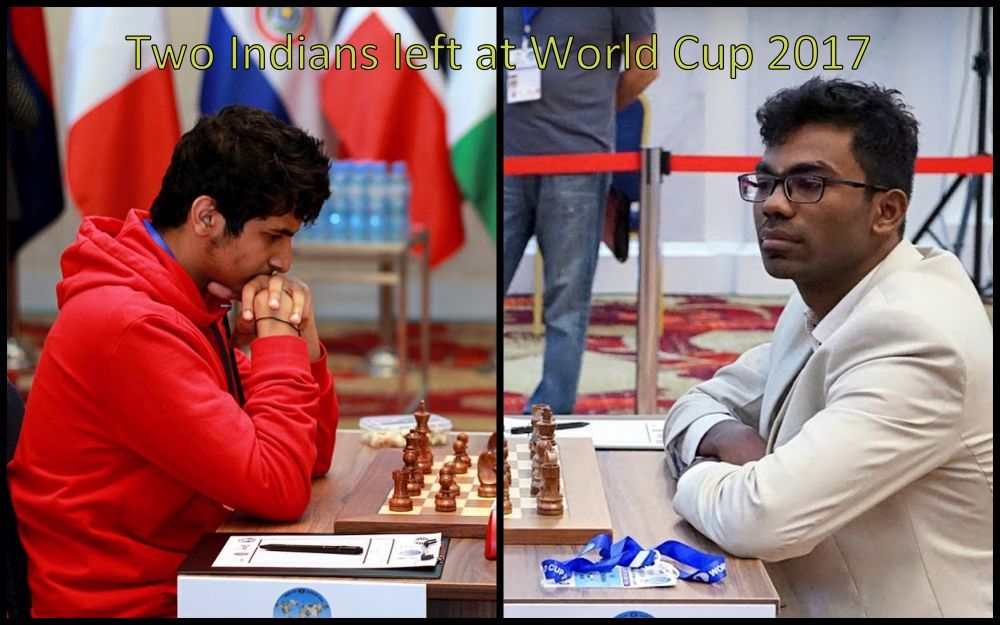 We began with seven. After round one we were down to five and now after round two we have two gladiators left: Vidit Gujrathi and Sethuraman

Sethuraman and Harikrishna played with each other in World Cup 2015. Sethu was able to beat Hari in the classical games itself with the score of 1.5-0.5. This time, however, the match went into the tiebreaks after both the classical games ended in draws. Both the players had played well and choosing a favourite was pretty difficult. Hari did have an Elo edge over Sethu of nearly 130 rating points. However, we all know that Sethuraman is under-rated. His 2619 rating is at least 50 points below his actual strength. 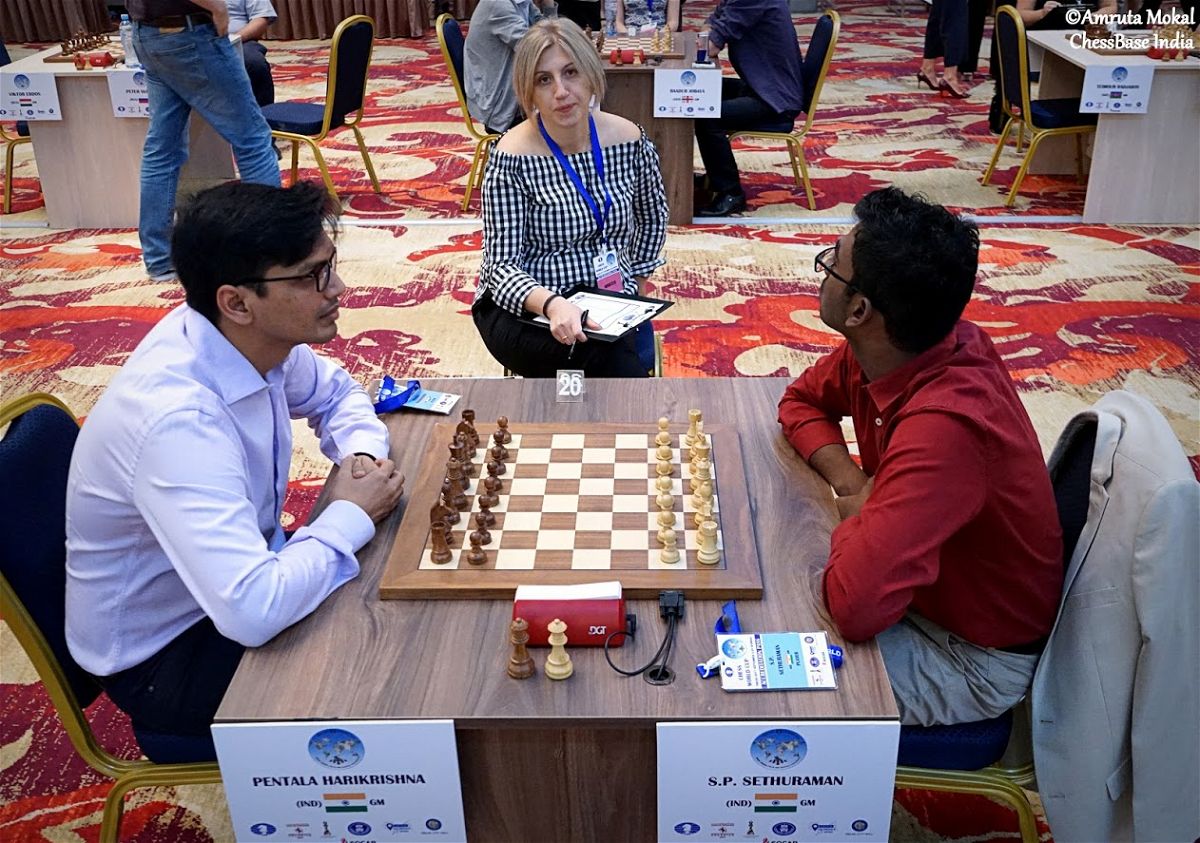 In the first game Sethuraman had the white pieces

The game began as a French Defence and both sides castled on the opposite wings. Sethuraman was the first one to start the offensive as he managed to build up an excellent position. But just like in his previous tiebreak with Yuri Gonzalez, Harikrishna wriggled out of the mess and drew the game. After the game Sethu came into press room, a tad dejected and asked me if he was winning. I said it seemed so. He asked me the time and seeing that only 20 minutes were left for the next rapid game to begin, he went to his room to get some rest. This is an important quality you require if you want to do well at the World Cup 2017, especially the tiebreaks. You have to forget what happened in the previous game and focus all your energy on the next one.

In the second game Hari had the white pieces and he went for the Guioco Piano. He played a new move in the opening Bg5, but Sethu had absolutely no difficulties in equalizing the game. When Harikrishna started to go ever so slightly wrong, Sethu picked up the opportunity and played an excellent technical game to finish off his opponent. 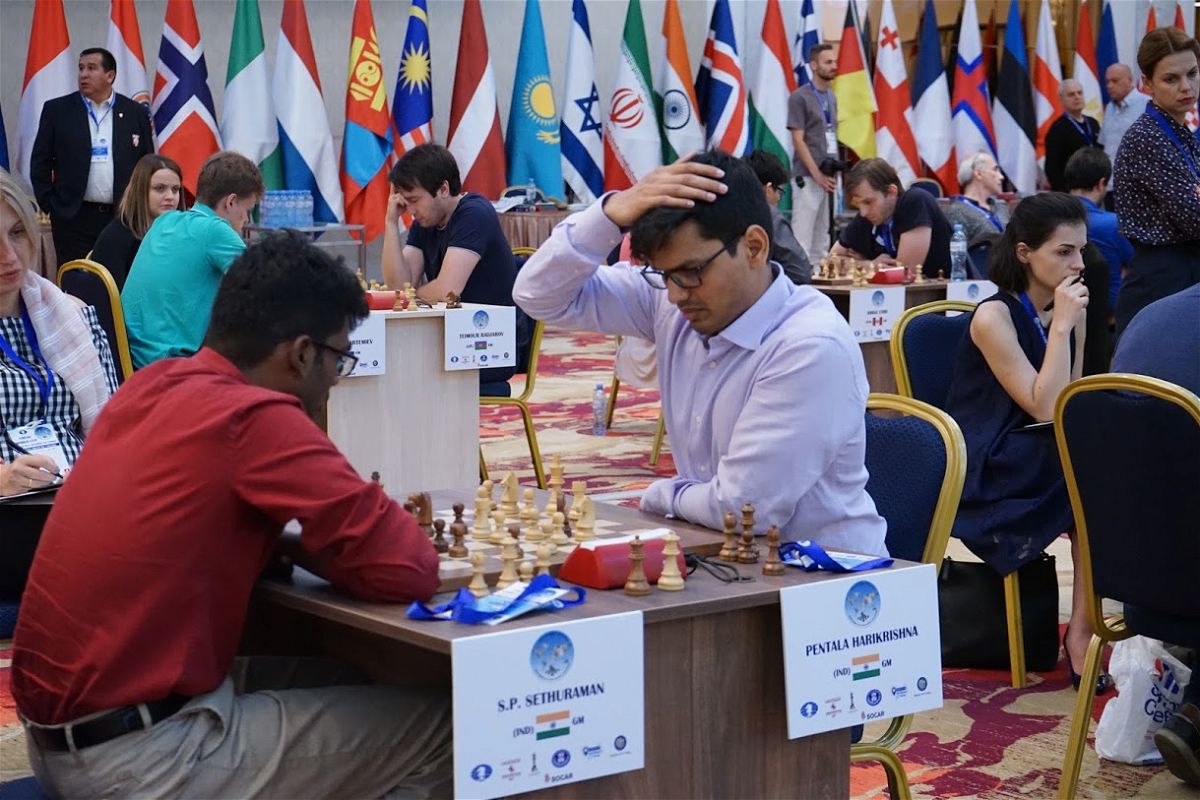 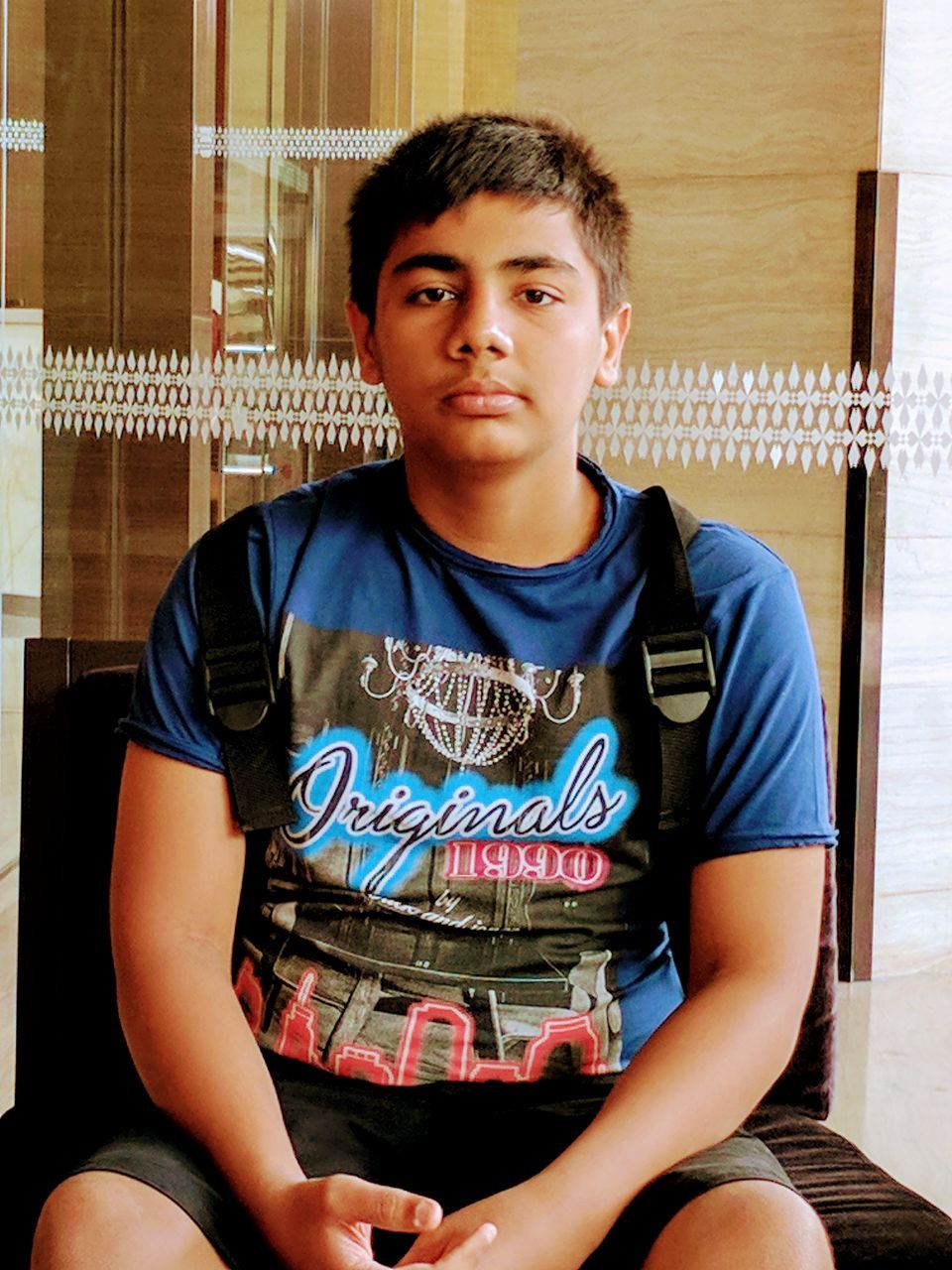 The above analysis has been done by two IM norms hold 13-year-old Prithu Gupta from Delhi. Prithu is following the World Cup very closely and decided to share his annotations with the readers of ChessBase India. We are delighted by the depth and details that he has been able to incorporate.
Sethuraman's interview after the game 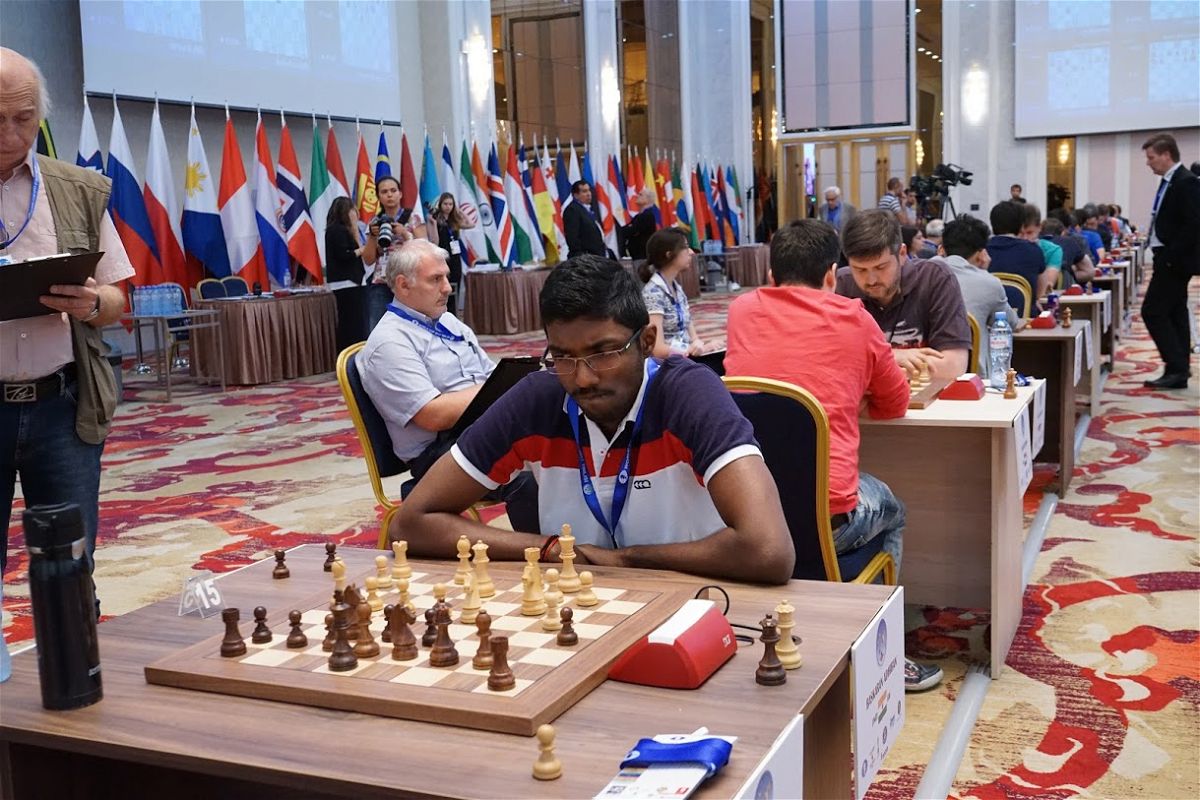 Adhiban had a nearly winning position in the game two of the classical section against Ian Nepomniachtchi. The game ended in a draw and the match was taken to the tiebreaks. Usually when a player misses the opportunity and has to indulge in a fresh fight on an equal terms, it is not so easy for many to cope with it. You tend to keep regretting the tactics you had missed and this affects your next games. But when it comes to mental strength, there is no one better than Adhiban. He came to the tiebreaks in an excellent mood and even when Nepomniachtchi played a novelty, he was able to circumvent it and get a good position.

Playing against Nepomniachtchi can be quite tricky. He not only plays very fast, but also makes a lot of facial expressions which can be quite distracting as well as misleading. But as Erwin l'Ami, the second of Anish Giri, right put it: Adhiban doesn't really care for Nepomniachtchi's expressions. He is busy in his own chess. And this reduces Nepo's powers." 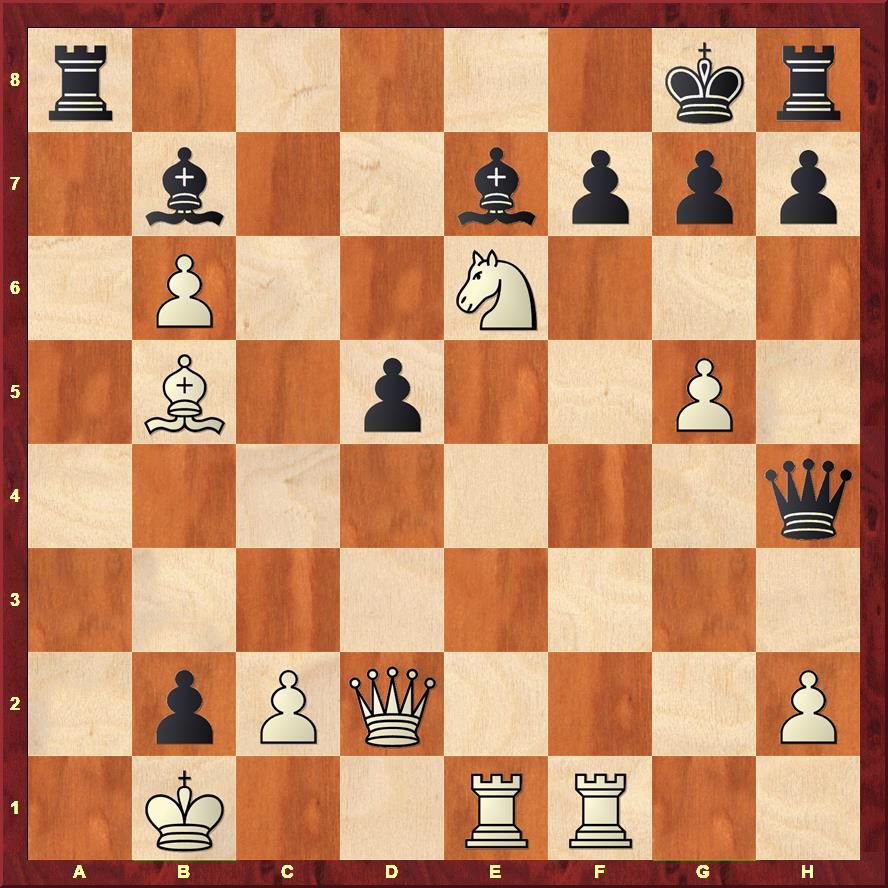 White (Adhiban) to play and win

This was a heartbreaking game. I was watching it live and was tremendously impressed by Ahiban's play. He had not only been able to refute Nepo's new idea of b4 and a5, but also got a winning position in spite of being 12 minutes behind on time. After such a loss, even the positive attitude of Adhiban didn't help him to make a comeback. He lost the next game with the black pieces and was eliminated from World Cup 2017. 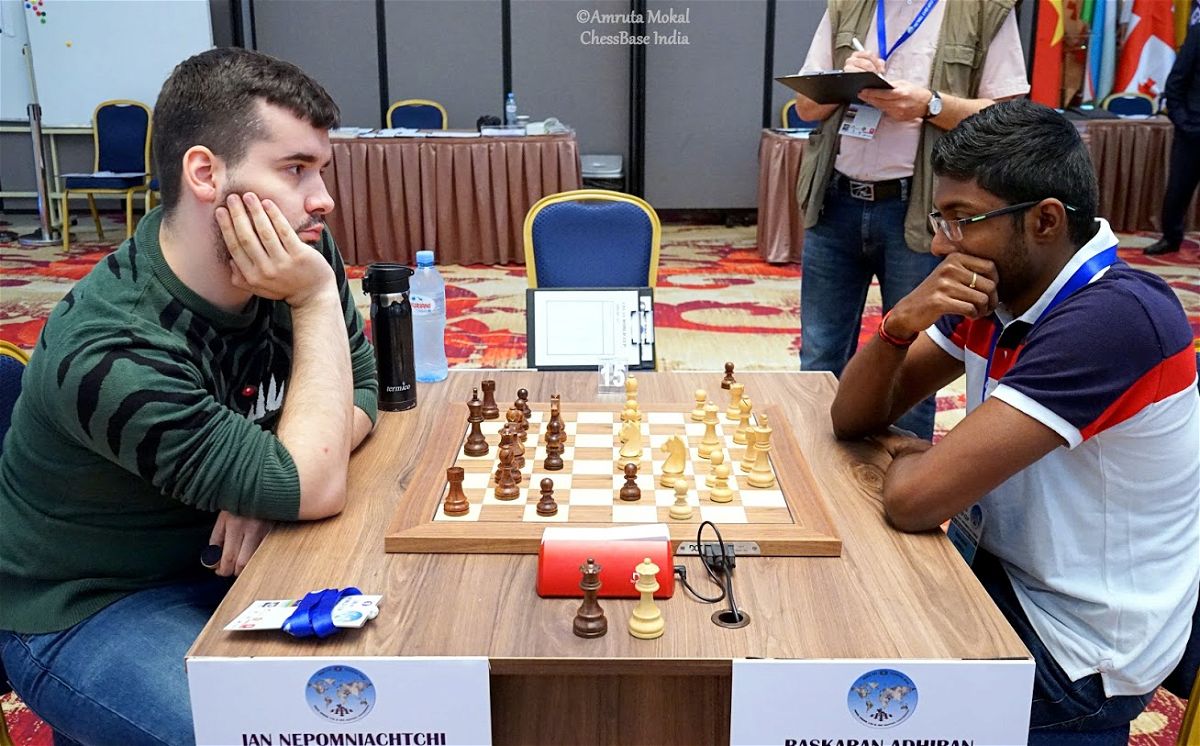 After the round we did a short interview with Adhiban where he spoke about what he learnt from this experience and what are his future plans:

In the third round Vidit Gujrathi will be up against Chinese grandmaster Ding Liren, while Sethuraman will face Dutch number one Anish Giri. Both of our Indian players are underdogs, but they were the underdogs in their previous matches as well. We hope that they will be able to give their opponents a tough time on the board.

Anish Giri speaks about his opponent Sethuraman, also about Indian talents Praggu and Nihal, and shows his surprise of no super tournaments being in India