CBIJ #8 brings to you the news of the rising stars of India. We want to share with you the stories of two hungry young kids - Kriti Patel and Prraneeth Vuppala. These two youngsters gained over 300 Elo points in roughly around two months. Kriti moved from a rating of 1300 to 1600+, while Prraneeth's ascent began from 1943 and ended at 2281! From the title one could be mistaken for believing that the duo are hungry for just Elo points. Well, that's not the case. The Elo gain is just a logical consequence of their hunger for hard work and knowledge. In this article we know these two champions better. We also bring you the 'importance of reading' in our Editor's pick section. And last but not the least, there is Quality Chess Book to be won for the winner of this edition's Trivia. 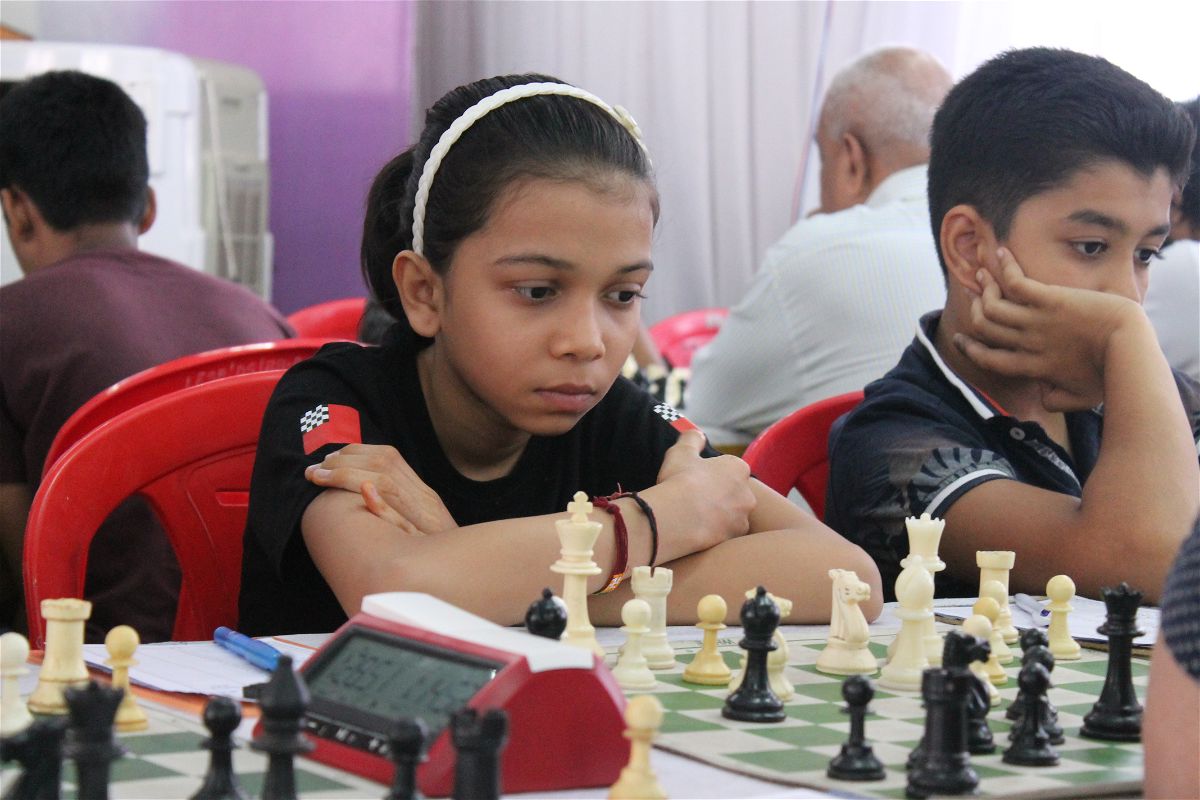 The universal expression that belongs to every chess player |Photo: Supriya Bhat

A month ago, 12-year-old Kriti Patel had a rating of 1340. It wasn't an extraordinary rating, but she has had a few surprising gains in her rating in the past. For the next 30 days, Kriti played astounding chess, and produced marvelous results in the Nationals U-13 and Commonwealth 2018. Although she lost her last two rounds in the former tournament, the Mumbai girl still finished second and increased nearly 300 points altogether. These are definitely not easy to achieve!

I have seen the grit the girl has gone through in the last years. She is a part of a family that is wholly into chess; her father, Mayur Patel (a known face in Mumbai chess circuit) and sister, Yuti Patel, both used to play chess and of course her mother Preeti Patel, who is always by Kriti's side. Here is a little info on her personal life, mostly aside of chess!

1. likes to watch any sports movie

2. loves to listen to songs from Bhaag Milkha Bhaag

Motivational songs like this is what keeps Kriti going

3. would love to meet Magnus Carlsen, if given a chance to meet anyone in the world.

4. would prefer to be her sister, Yuti Patel, if given a chance to be anyone in the world. 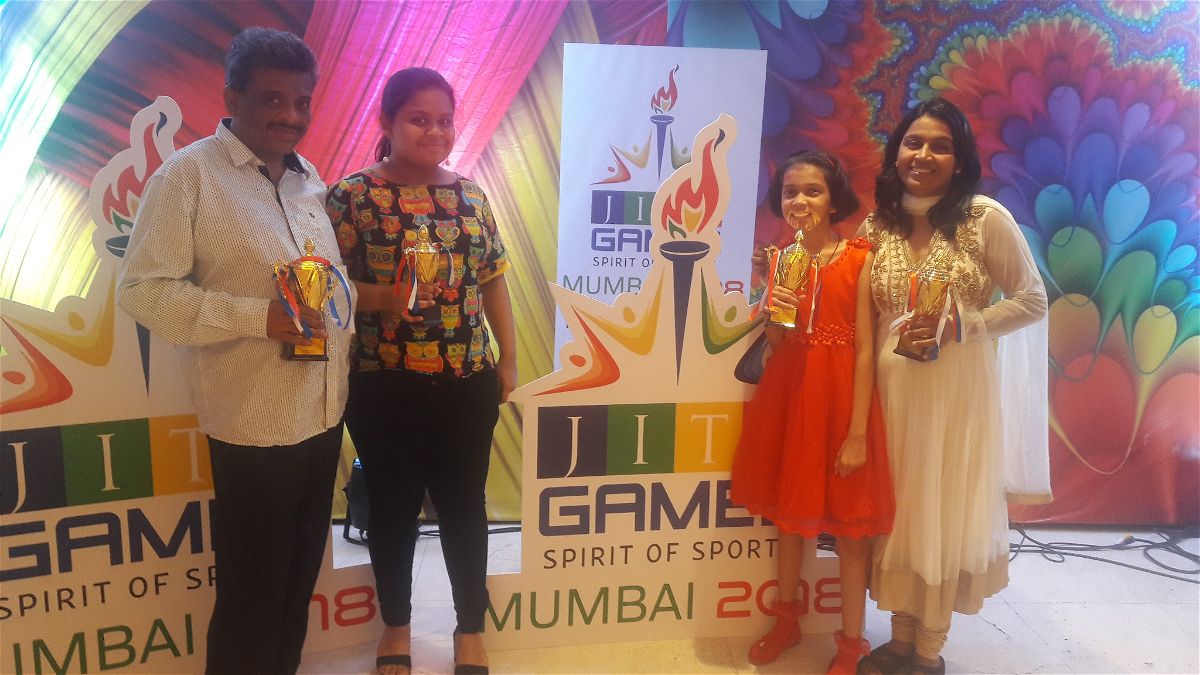 The Patel Squad together, who I like to think of as the Dangal family!

5. would love to go to Disneyland, if given the choice to go anywhere in the world.

6. Her favorite square is e4

7. will read any Roald Dahl Book

9. would like to add new rules to chess, if given the chance to change anything about it

10. was given her best advice from her coaches, to play with confidence at all times

11. would say, "If you really like something, go for it!" when asked for advice

11. goes to IIFL and Mumbai Mayor's Cup every year

12. loves to eat chocolates and drink buttermilk during the round

13. says she is not afraid of anything

14. best tournament was the Asian Schools and Nationals U-13

Here is Kriti's best game from the National under-13:

Kriti is an excellent chess player (attested by the game above!), but did you know she is also a poet? Here's a poem that Kriti wrote in the 2nd grade:

I am a king

I wish to have a wing

I am the strongest,

but I can't go the longest,

I am the tallest of all,

which never get older

I am a king

I wish to have a wing! 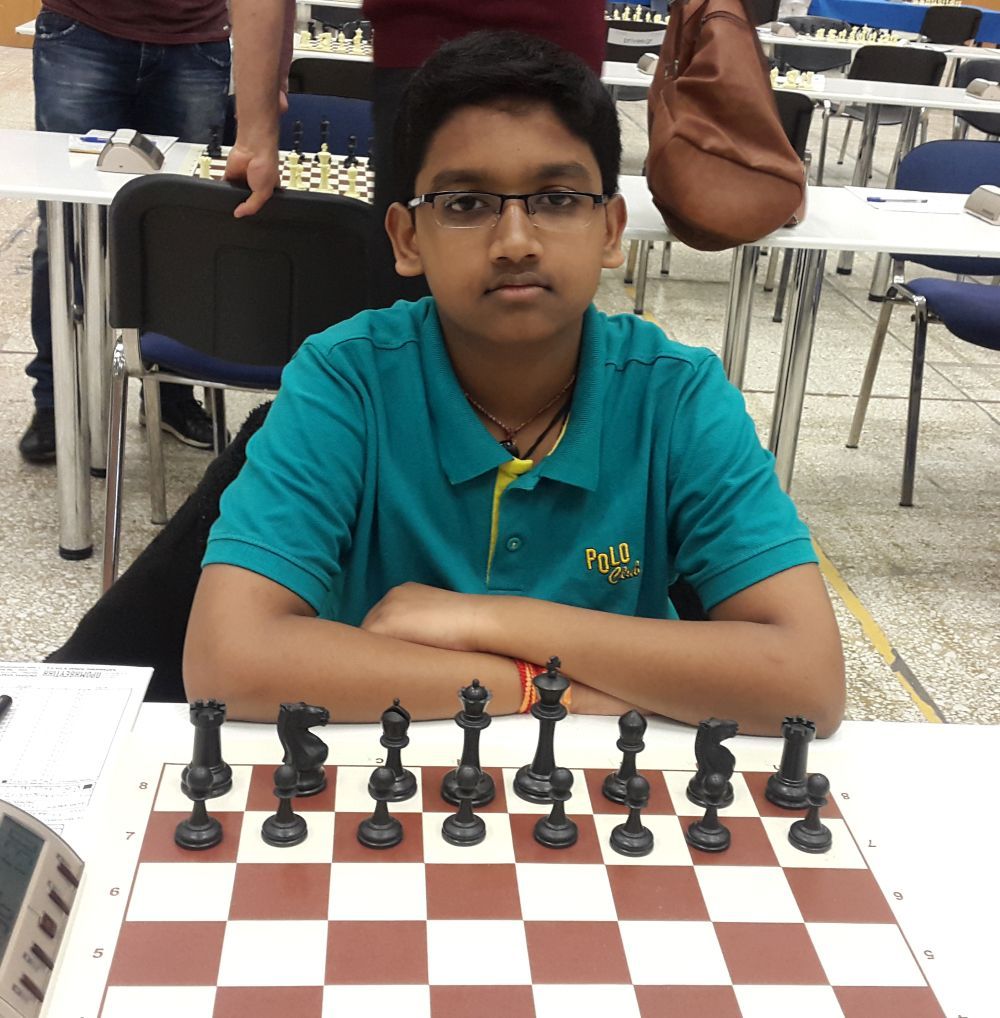 Prraneeth Vuppala, born in 2007, played his first tournament in June 2013. He got a rating of 1212 in 2014, his CM title within another year, and today Prraneeth is rated 2281, becoming the World no.1 in U-11 category. The boy credits his achievement to his mother, father and coach. His father is the one who accompanies him to the tournaments and helps him prepare emotionally in many ways. His favorite player is Alexander Alekhine, for his attacking play. His strength is middle-games. When it comes to food, Prraneeth really likes to eat a dosa! The youngster strongly believes in hardwork and dedication. We asked him how he would tell someone new to chess to come to his level. His reply was, "If you work hard on chess, and dedicate yourself to it, you will achieve it in no time." How true is that! Here is one of Prraneeth's best games against IM Praveen Kumar: 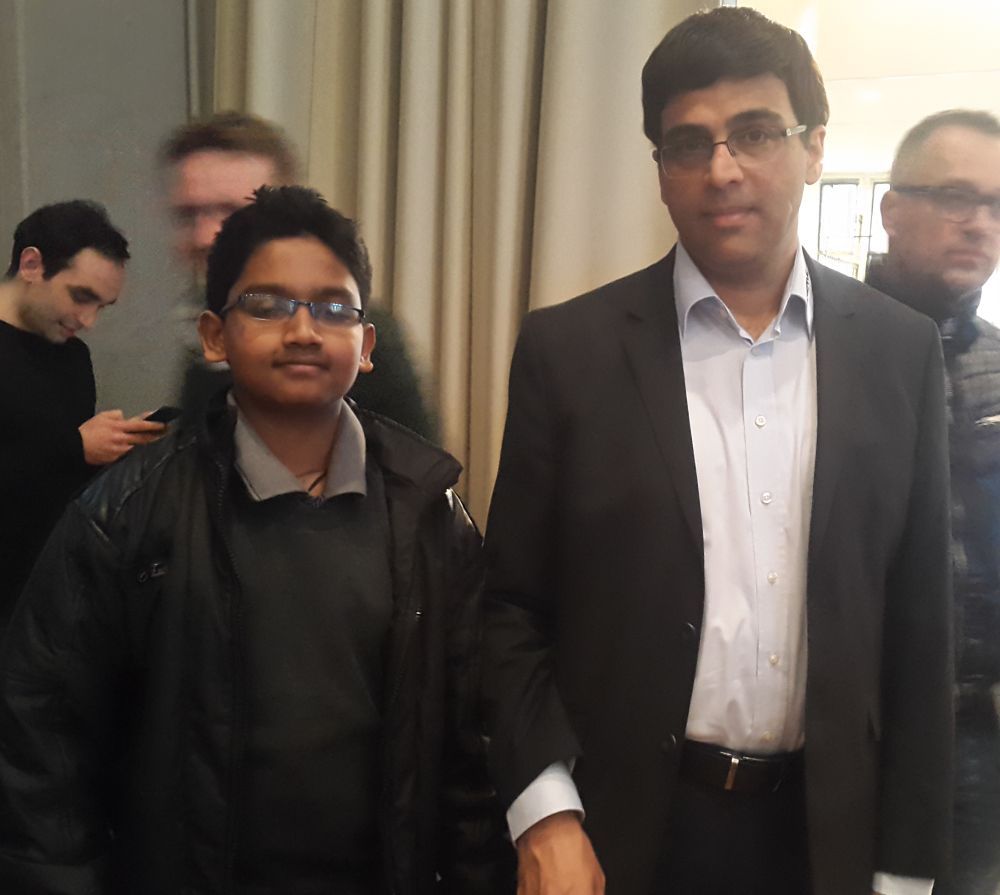 Prraneeth's moment of pride: in the frame with GM Vishy Anand 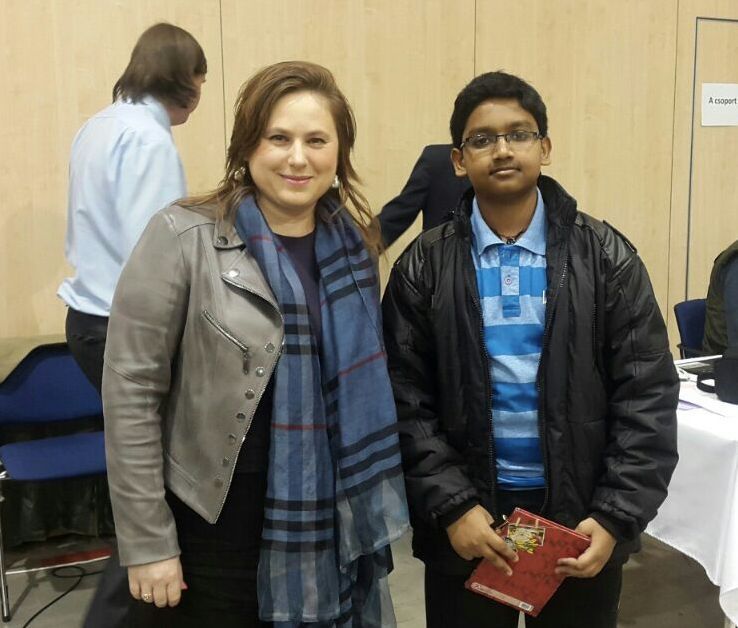 With the greatest player of all time Judit Polgar 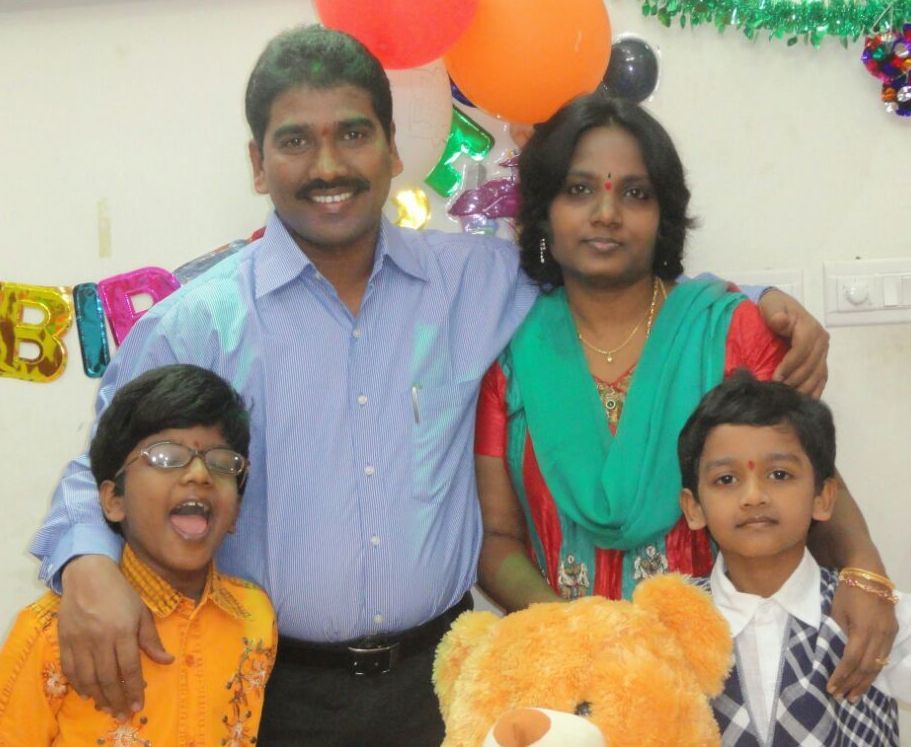 5. At the age of two and a half he was chanting Bhagawad Geeta slokas, 500 general knowledge question and answers, performed mono action, dialogue delivery and drawing etc.

7. In the month of March and April 2018, Prraneeth participated in 1. Grenke Open 2. Hofeheim Open, 3. Traindria Open in Greece, 4.Budapest Spring Festival in Hungary and scored 232 ELO points in all with a K factor of just 19.

9. In addition to chess, he has stood as the champion twice in National ABACUS Championship in 2015 and 2016.

Editor's Pick: Why you should read seriously

Reading has always been the most widely used form of communication around the world, stretching back to the very beginnings of our race. It allows a person to express thoughts, views, sentiments and ideas in a very simple and efficient manner. During the 1950's, even in the midst of color television, reading was shown to be the most common activity for people of all ages across the globe. Although we can never stop reading, the number of serious readers has decreased by a considerable amount since then. It would be wrong to stop use of gadgets entirely for the sake of books, but the activity shouldn't be left out of our schedule ever.

A lot of people believe that reading any book is taxing when you can just 'sit back and watch it', but that is not wholly the case. Once you really like a book, believe me you can get dangerously hooked on to it; you just can't bring yourself to put it down! I for one feel that without books, my life would be just as incomplete as it would be without any other electronic. For all serious readers out there, you know exactly what I'm talking about. For those of you that don't, think of the benefits of reading!

Just like an ice-cream shop, you have a vast variety of 'flavors' that you can choose from. Apart from chess books, there are other books as well that bring a level of satisfaction. Are you the kind of person in chess who likes to take risks and play it dangerous? Maybe you love surprises? Try reading a suspense thriller, such as Shall We Tell the President? by Jeffrey Archer. Maybe you've just played a great game or won and feeling happy? Check out the hilarious comedy, The Hitchhiker's Guide to the Galaxy by Douglas Adams, which will double your happiness. Want to explore the world and see the wonders of fauna and flora in a chess tournament? Consider Last Chance to See by Douglas Adams and Mark Carwardine. Are you in a place far away from the comforts of home and miss your family or partner? Read this wonderful romance, The Fault in Our Stars by John Green. Do you feel particularly brainy? Try reading A Short History of Nearly Everything by Bill Bryson. Finally, if you've suffered a heart-wrenching loss and have nowhere to turn to, read the motivational story of the big guns, such as Elon Musk: How the Billionaire CEO of SpaceX and Tesla is Shaping our Future by Ashlee Vance.

You may be thinking, why am I writing about reading on a chess wall? I picked up reading at tournaments and found that it was a wonderful way of relaxing and calming down between rounds. It serves as more than a good pastime and I really think that lot of chess players can benefit by picking up such a habit.

"The more that you read, the more things you'll know.

The more that you learn, the more places you'll go."

Today's trivia question is: Which is your favourite chess book and why?

Leave your answer in the comments section below! The lucky winner will be awarded a book of his choice from the ChessBase India shop.

All the tournaments in Europe seem to be full with Indian players at the minute. All the best to all of you there! Juniors, if you have some great games you would like to share, please contact us on chessbaseindiajuniors@gmail.com.