Abhimanyu Mishra reached Europe around mid April. From 14th of April to 31st of May, the boy has played 5 tournaments back to back! That's a total of 45 games in 47 days. Starting with an Elo of 2408, he has pumped it up to 2496. In the process he also scored his two GM norms! The Corona virus scare is real, the pressure of Karjakin's youngest GM in the history of chess record is on his shoulders, yet nothing comes in between Abhimanyu and his will to play good chess. He won the Vezerkepzo-2 GM May event on tiebreaks. We give you an overview of the tournaments he has played in the last month and a half and the boy has sent us an annotated game that involves a smooth positional victory against a GM. 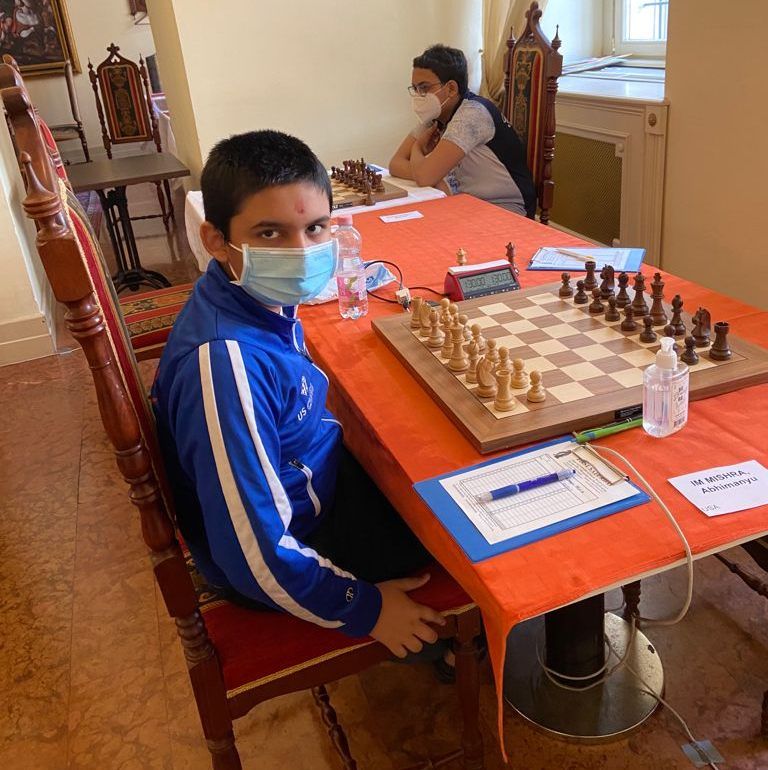 Breaking Sergey Karjakin's youngest GM in the history of chess (12 years and 7 months) record seems very realistic for 12-year-old Abhimanyu Mishra. 5th of September is still roughly around 90 days away and Abhimanyu needs only 1 GM norm and 4 Elo points to reach 2500! You become a GM when your rating crosses 2500 Elo and you have three GM norms. Abhimanyu has two GM norms already and his rating has climbed up to 2496. 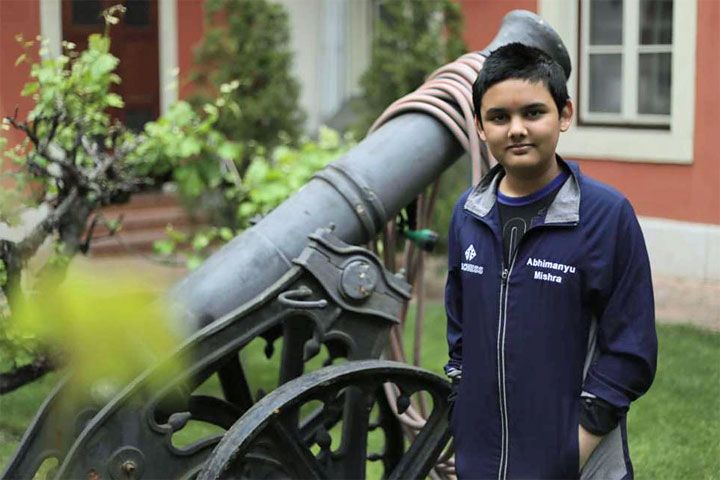 Like a canon! 12-year-old Abhimanyu Mishra has 90 days to break Karjakin's record of world's youngest GM ever and needs two Elo points and 1 GM norm.

The last couple of months have been dream come true for the youngster as he has gained 90 Elo points and moved from 2408 to 2496. But things have been far from easy. Abhimanyu and his father Hemant travelled from the USA to Budapest under quite a lot of stress related to Covid-19. They weren't sure whether they would be allowed to fly or would make it to the tournaments in Hungary. Those initial moments of stress turned into relief when Abhimanyu sat for his first game at the board on 14th of April 2021. Since then Abhimanyu has played 45 games almost without a break in five back to back tournaments. The father and son duo have a clockwork like routine which involves chess preparation, fitness, cooking food and Abhimanyu giving it his all at the chess board. Below are the five events along with the scorecards and dates for you to understand how well this youngster has performed. 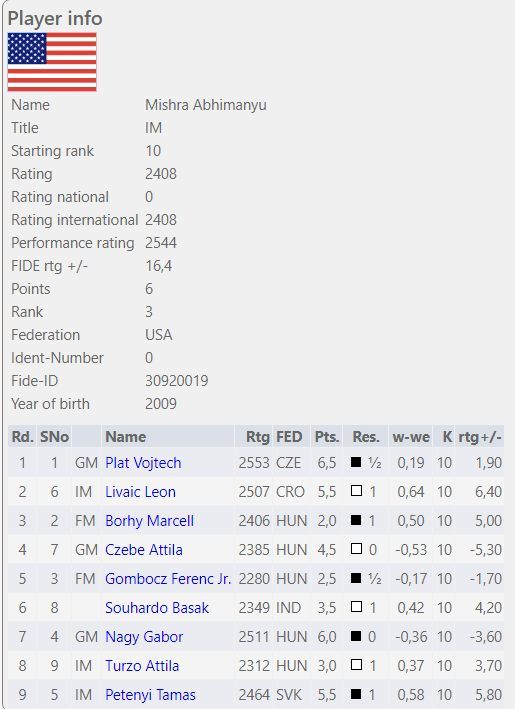 Abhimanyu's performance at the next event - Vezerkepzo GM from 24th to 30th of April 2021. The youngster scored his first GM norm and moved to 2446.
Second GM norm for Abhimanyu at the first Saturday May GM event (1st to 11th May). He gained 31 Elo points and moved to 2477 on the Elo scale.
A day's break on 12th of May when Abhi made his appearance on the ChessBase India channel. From 13th to 21st May he played at the Vezerkepzo GM May 2021 and gained 8.7 Elo points, reaching a live rating 2485
Vezerkepzo GM May 2 from 22nd to 31st May started well but then Abhimanyu slowed down with two losses. He picked up his pace towards the end of the event scoring 3.5/4. Not only did Abhimanyu gain 11 Elo points and reached 2496 on the Elo scale, he also finished first in the tournament on tiebreaks. 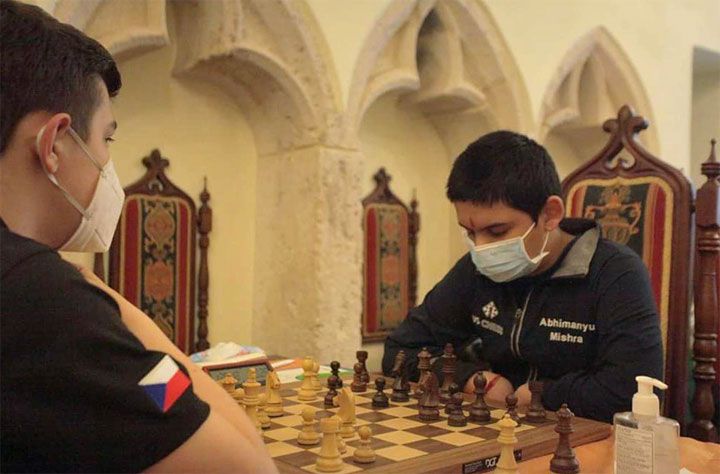 Complete focus on the job at hand | Photo: Gara Ticia
Winning a tournament is always memorable

We asked Abhimanyu to share with us his favourite game of the event and he chose his victory over the experienced Hungarian GM Zoltan Varga. While we know how good Abhimanyu is tactically, this game shows his positional skills and how he is also able to milk small advantages and take the game to its logical conclusion. 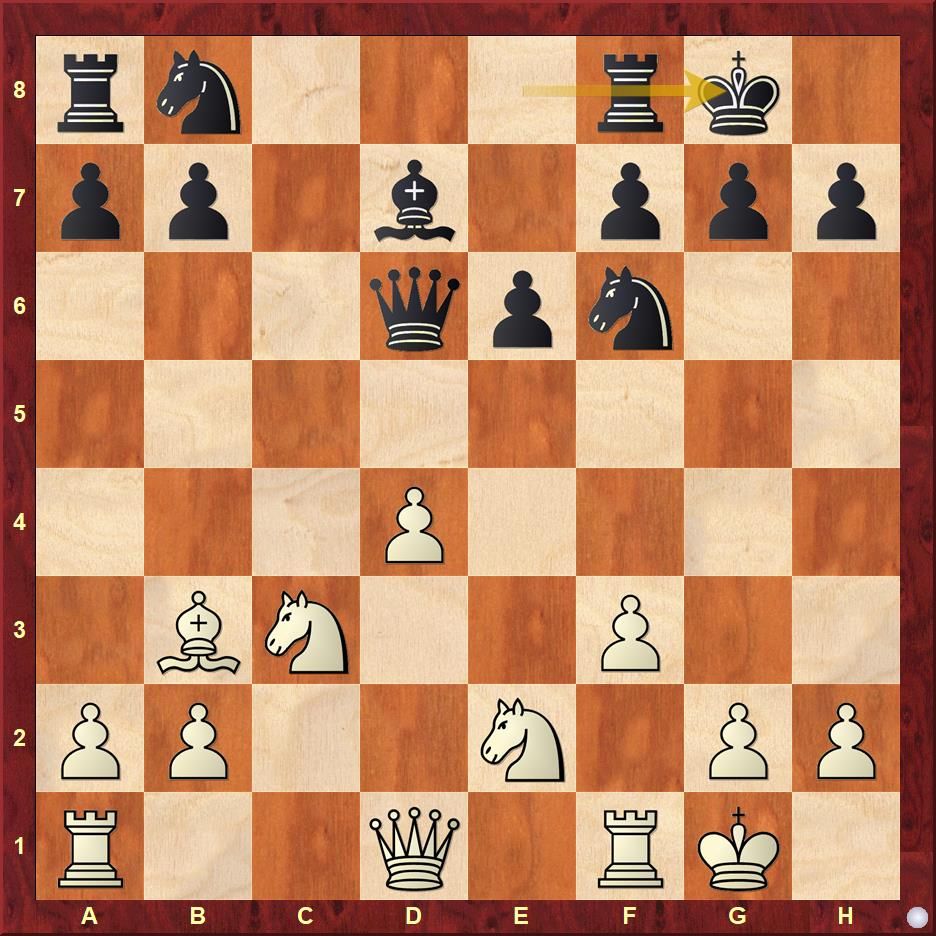 Black has just castled. Now Abhimanyu did not like the fact that his knight is on e2 and pawn on f3, and hence decided to liquidate in the center with the move d4-d5 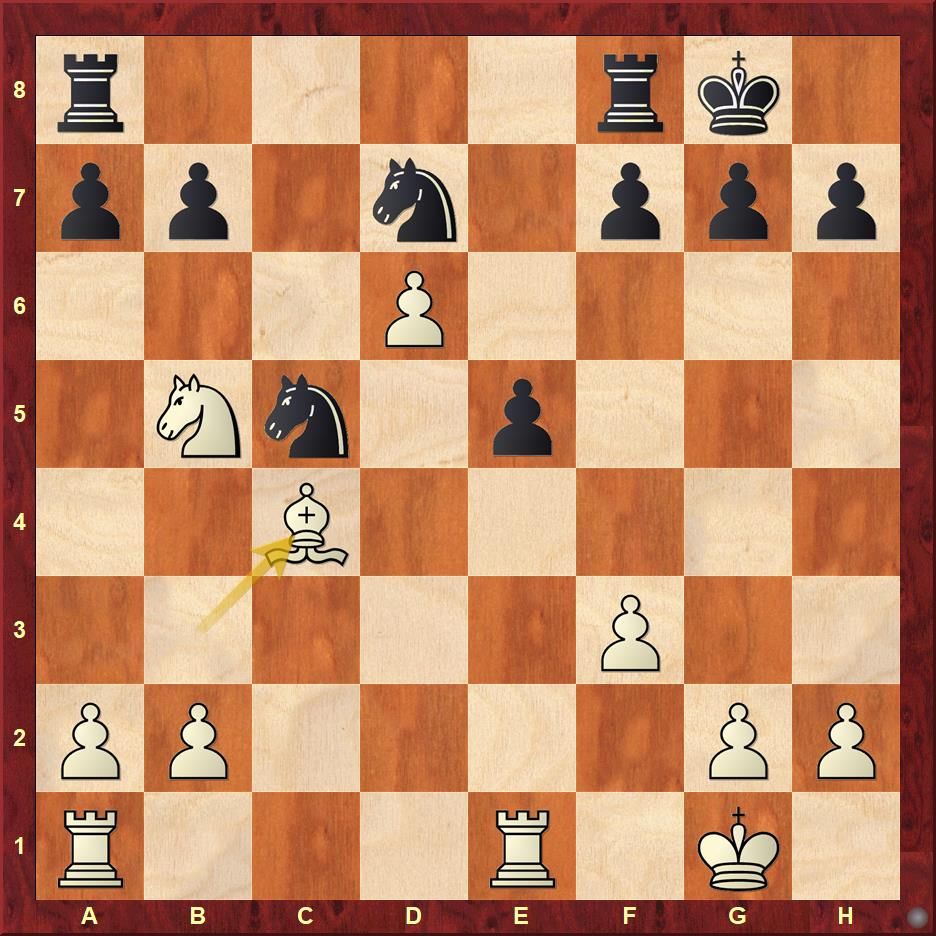 The move Bc4 is a calm one and Abhimanyu is now threatening to push his pawn to b4. Black decided to cement his knight on c5 with the move a5, but that meant that the knight on b5 is fixed and very strong. 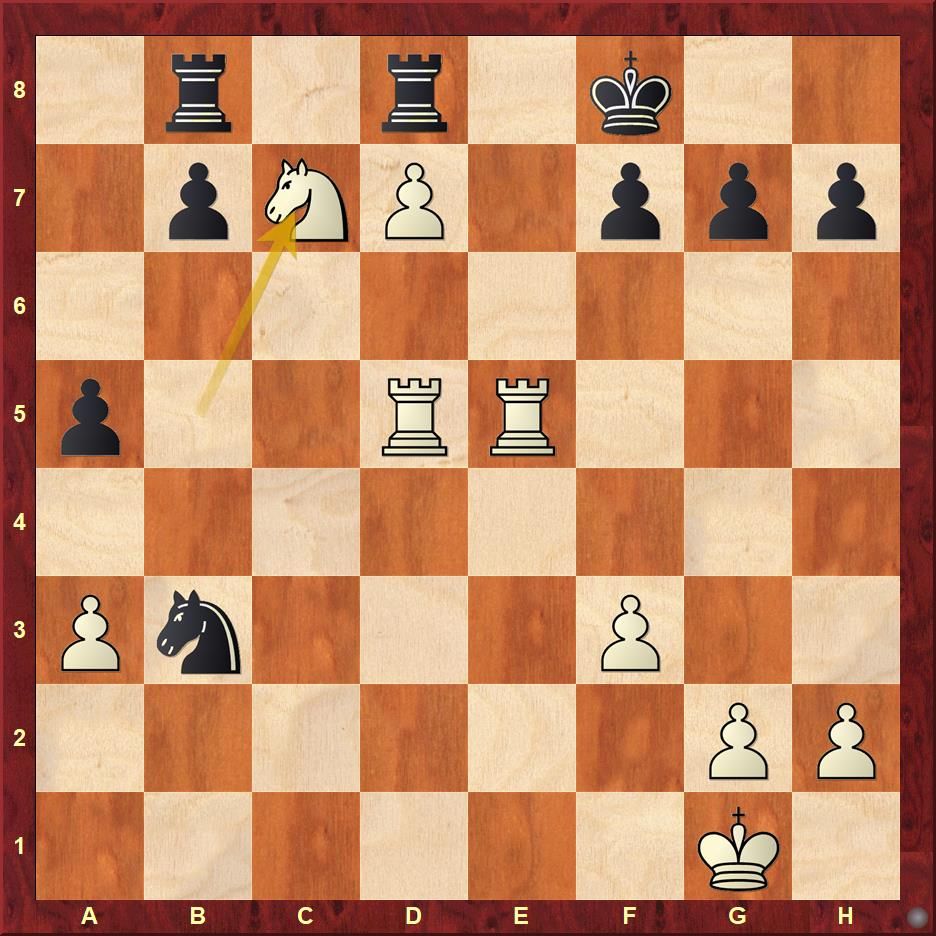 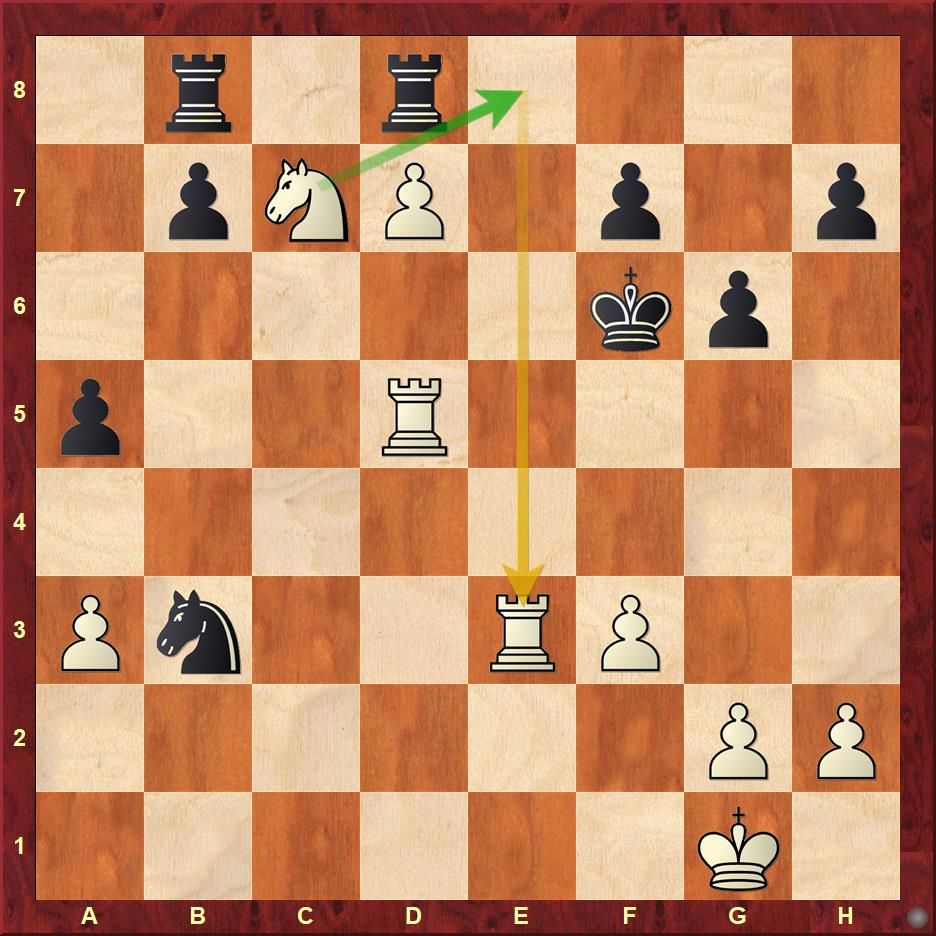 Re3! The knight on b3 is attacked and the white knight is moving to e8 where it will checkmate the black king! Varga resigned here.

Abhimanyu's next tournament will begin from the 5th of June 2021 at the First Saturday GM norm June edition. His father Hemant calls this period of five days as one where they are getting their much needed rest. The little boy we are sure is far away from taking rest. He must be sharpening his axe to finish the formalities for becoming a Grandmaster! It's not going to be easy though, he has to fight it out against some talented young Indian players.

We want to thank all our viewers who supported Abhimanyu through his Gofundme page. In the last month or so over 12,000 USD have been raised and this will definitely help Abhimanyu in his aim of becoming the youngest GM in the world. Speaking to ChessBase India Abhimanyu's father Hemant said, "We would like to thank all the chess enthusiasts world wide who supported Abhimanyu to the bottom of our heart. It would not have been possible without this generous support and love. We are still waiting for one more good tournament and will keep pressing till the last day."