Harikrishna speaks about his win over Levon Aronian

In the sixth round of the Geneva Grand Prix, India's Pentala Harikrishna was pitted against the in-form Levon Aronian. The Armenian had recently won the Norway Chess and had completely outplayed Magnus Carlsen. Hari also had the black pieces. But the Indian player was undeterred. He played some fantastic chess to outplay his 2800+ opponent. In this interview with Sagar Shah, Hari sheds light on this victory, what was going through his head before, during and after the game. You will also get to know about Hari's second and his future plans.

Sagar Shah (SS): How happy are you with your performance at the Geneva Grand Prix 2017?

Pentala Harikrishna (PH): I am satisfied with my performance in terms of quality but result wise I am not satisfied. Eighth round loss to Li Chao and not winning against Mamedyarov  spoiled my chances to fight for first place.

SS: One of the best results for you in this tournament was your win against Aronian with the black pieces. How did you prepare for it? 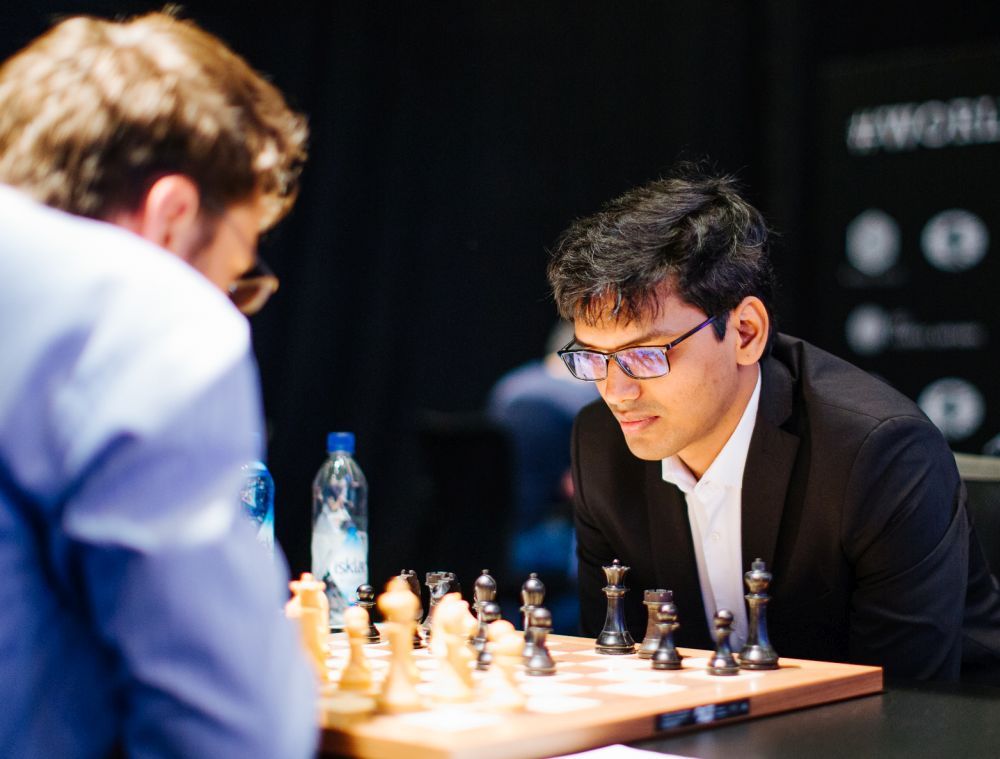 Beating Levon Aronian with the black pieces, especially after his monstrous performance in Norway is no mean achievement!

PH: I prepared like any other game and followed my routine. I did not focus on whom I am playing and didn't see any reason to do something additional. I knew that it would be a hard-fought game with some novelty waiting for me!

SS: When facing a player like Aronian, what are some of the things that you take care about, especially because he prepares highly unusual ideas. His recent scintillating win against Carlsen with a3 followed by exchange sac comes to mind.

PH: Many of his ideas are highly interesting and he also puts a lot of hard work during the game to convert those ideas into point. But like I said above I mainly concentrated on what I will do and nothing else. When he played 1.c4, I went for the 1...e5. The English opening is very rich in ideas and both sides have many interesting tries. I was not worried that I will be out prepared.

Aronian vs Harikrishna, position after 18 moves 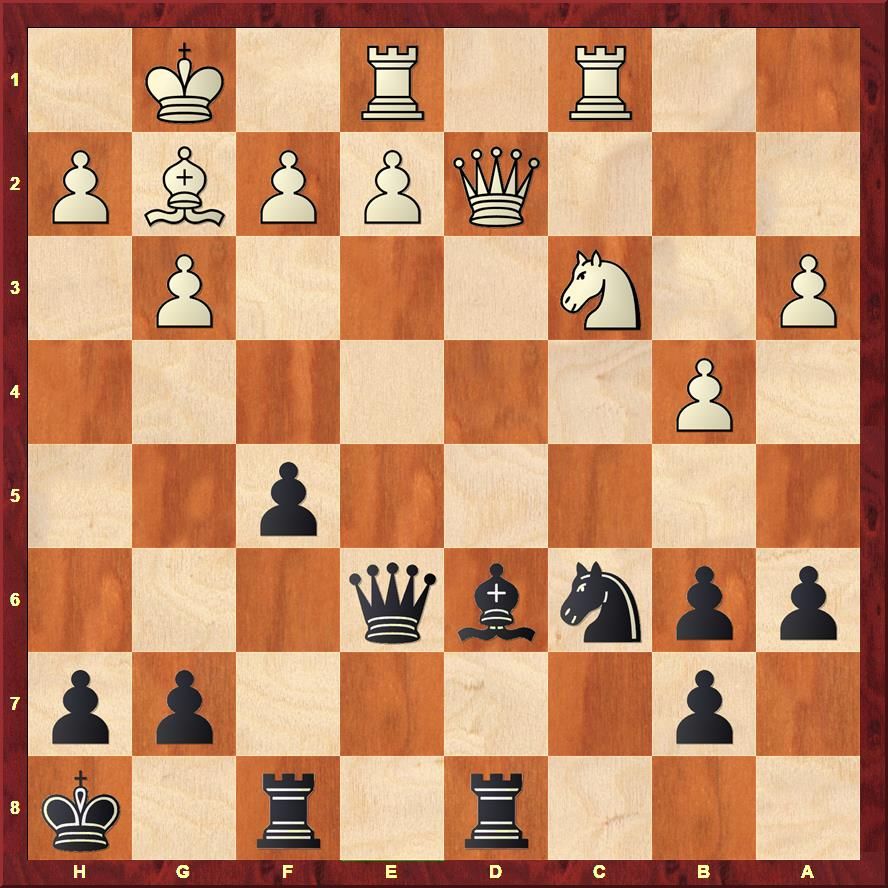 SS: How did you evaluate this position during the game? Were you thinking that a draw would be a good result at this point?

PH: I evaluated  that White has a pleasant position after the queen exchange with Qa2. At the same time, the computer underestimates Black's knight jumps. I am pretty sure that is the reason why Levon started with f4. He wanted to stop Black's knight from going to g4. It is too early to think about making draw. When position is worse you need to defend! 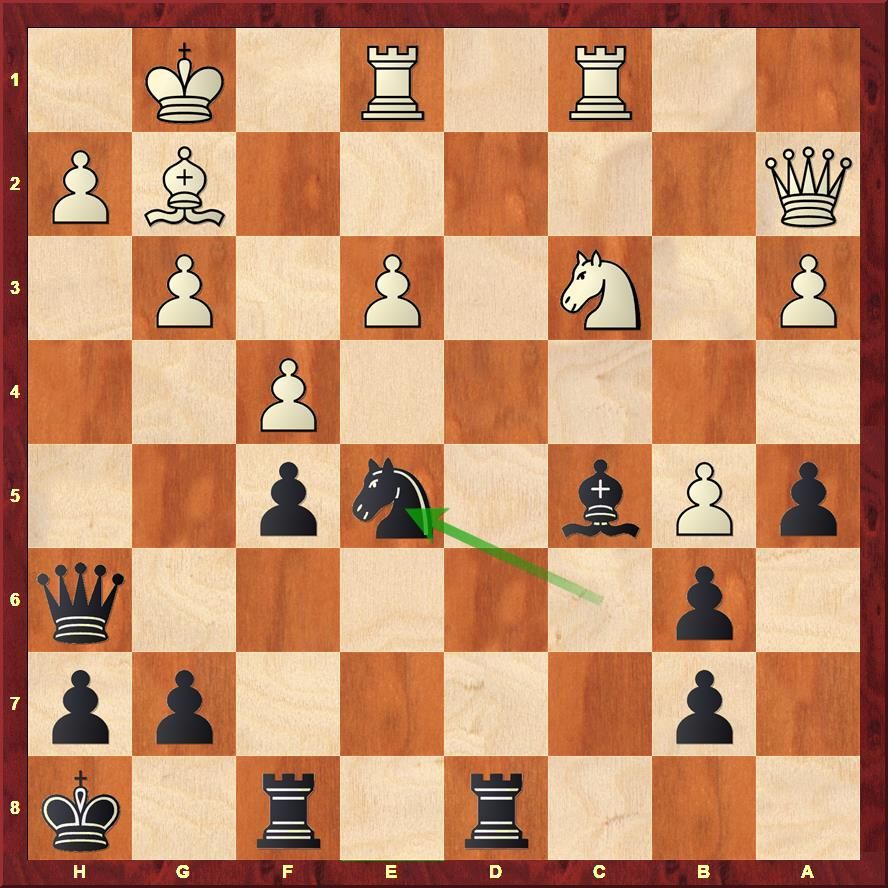 SS: Had you see this move (...Ne5) before or it was only after Aronian had played e3? Do you think Aronian missed it?

PH: I saw this idea as soon as he played f4. Since I had lot of time I did not hurry in playing  the whole sequence and took my time to calculate further. He missed this idea. If not for Ne5, White is doing well.

SS: How did it feel to beat such a world class player like Aronian. Especially after such a long time. (Hari's last win against Aronian in a classical game was in 2001)

PH: It felt nice to make Ne5! And win a good game. There was not much time to think about the victory and I started to prepare for the next game. 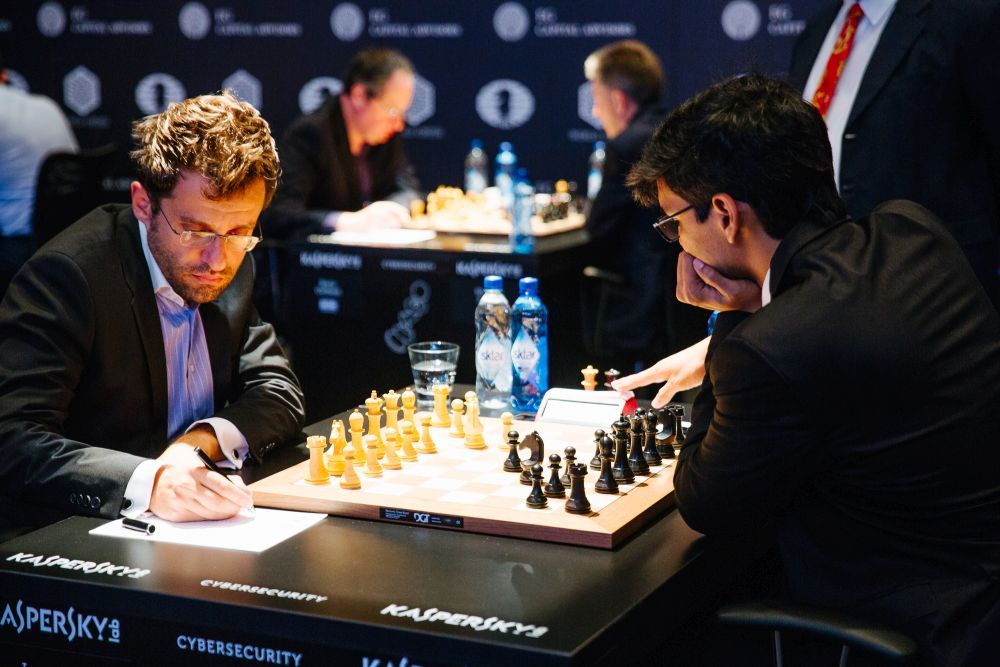 It's not that Hari has not beaten top players like Aronian in the past. But given the importance of the tournament and the form that his opponent was in, this will definitely count as a great victory.

(The entire game between Aronian and Harikrishna with analysis is given after the interview.)

SS: You came to this event with Markus Ragger as your second. How did your association with him begin? How helpful is it to have him by your side during such events? 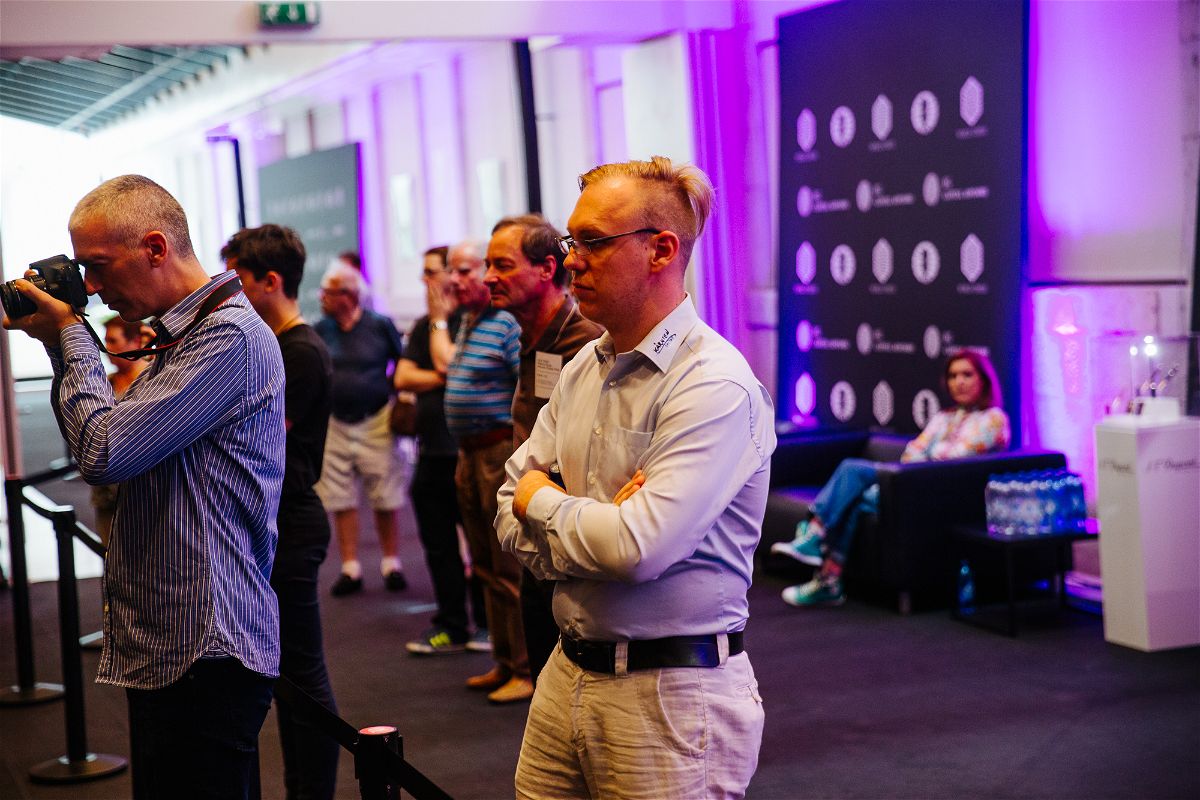 Markus Ragger is Austria number one with a rating of 2656

PH: We started working from the beginning of 2016. I joined Solingen chess club in 2015-2016 season and that's how we got in touch. In Geneva he was sleeping around 4 or something every night, working hard on the openings that I was going to play. Morning he would explain his impressions and then we decided what to play.

SS: Currently you have a base in Serbia. How do you apportion you time between Serbia and India?

PH: It is hard to say, as I am travelling most of the time. I spend majority of the year in Europe, as I have my training sessions here and when I am free I visit Hyderabad.

SS: What are the next events that you would be playing?

PH: Next up on the agenda is Biel Masters in Switzerland, followed by World Cup 2017 in Tbilisi, Georgia. Knock outs are unpredictable and the best would be just prepare well for the event! 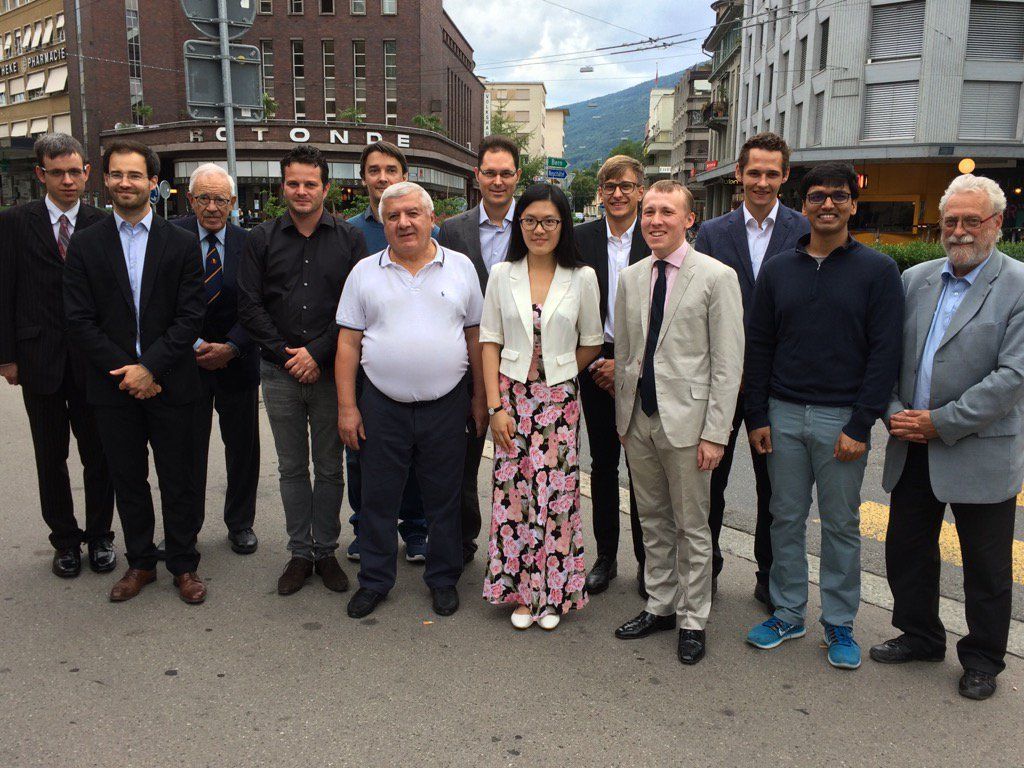 SS: ChessBase India will be in Georgia to cover the World Cup 2017. What is your opinion about ChessBase India and its newspage. Has it made a positive impact to Indian chess?

PH: Lot of Indians are going to play at the World Cup! So it will be great to have Chessbase India there. You guys are covering all the events where Indians are playing and winning! You are doing a wonderful job. Keep it up!

SS: Thank you Hari for your time! We hope that you do well in Biel and then finish in top two of the World Cup and qualify for the Candidates.

At ChessBase India we have believed that there is a lot of talent in Indian players when it comes to writing as well as annotations in chess. The newspage is thriving thanks to contributions from all corners of the country. During the Geneva Grand Prix, we had a young boy named Tanmay Srinath annotating Harikrishna's games in every round. He has shared his experience of annotating below. We hope that after reading it, many of you might be interested to contribute your analysis to the newspage. As Mikhail Botvinnik would say, "The best way to improve is to indulge in intensive analysis and then get it published." All you have to do is send your analysis to chessbaseindia@gmail.com. It could be analysis of an interesting game at a recent tournament, or your very own game. We look forward to your contribution! 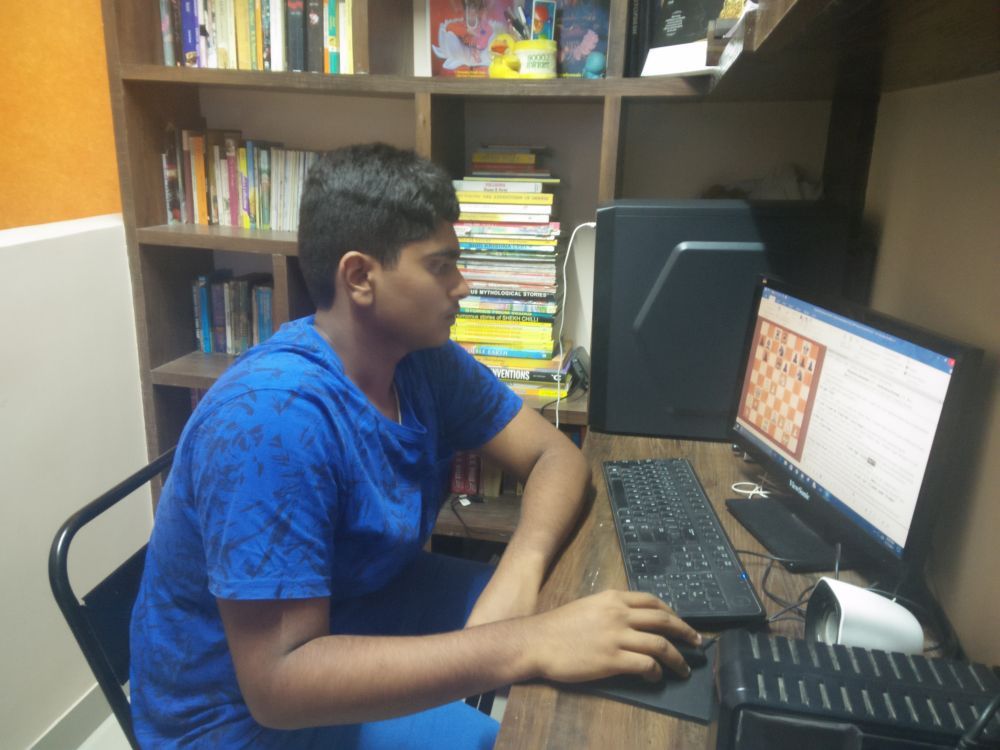 I am in 12th grade, where free time is hard to come by. So instead of practicing my first love (chess), I took annotating Harikrishna's games as an opportunity to learn something new. Every day, after finishing my college work at 10:00 p.m, I would go the computer and download Hari’s game from www.live.chessbase.com.

First, I would delete the tactical analysis that would appear in the file and then I would open the Live Database. The purpose of this is to check for the theory that occurs in that game, and suggest some alternatives. Harikrishna played games in the h3 Najdorf and also the quiet Italian that has been causing quite a lot of noise at the top level. Doing this really helped, as I learnt quite a lot of theory exploring Hari’s games. I will probably play the Italian in my next tournament, over my pet Ruy Lopez!

When I analyse a game, I always make it a point not to consider the engine’s moves and suggestions at the beginning. First, I go over the game on my own, and the variations I have included are the ones I would have played in that position. I use an engine only as a blunder check, and to get me some variations of the moves I chose as alternatives. I used Houdini 5 for the purposes I mentioned above, and I put it on tactical mode to calculate some of the deep sacrifices.

I would normally take an hour plus surplus to finish annotating, and would send over the games to ChessBase India. This experience showed me that when I do things I love, time is just a number. Also, annotating Hari’s games was a revealing experience, as I was taught firsthand what small advantages meant, and how hard it is to win games at the top level. I learnt defense, offense, positional and tactical nuances, and thus I was able to level up my own game.

Overall, it was a fantastic experience . I really enjoyed working on this project, and learnt some very important lessons along the way. Thanks to Sagar and team for providing me this opportunity to annotate Hari’s games. For a chess lover like me, this is the world. Like a great man once said: Chess is art, science, sport and most importantly, fun!

Geneva Grand Prix: P Harikrishna faltered at key moments against Li Chao to get knocked out of title race