It was the most exciting round of the Norway Chess 2017. Three games ended with a decisive result, but all five were filled with some brilliant moments. The game that will be remembered for many years to come was between Levon Aronian and Magnus Carlsen. The Armenian showcased some exquisite preparation, cunning middlegame play and powerful tactical vision to finish off the World Champion. Vishy Anand lost his second game of the event to Anish Giri. Detailed analysis, pictures and much more!

What a day it was in Stavanger! The rest day before round four seemed to have done some magic on the Norway Chess participants. Three out of the five games concluded with a decisive result. Unfortunately, the Indian superstar, Vishy Anand had to call it quits against the Dutch number one, Anish Giri, in a 33-move-long game. The two had met 15 times over the chess-board before this encounter and 14 out of those games were drawn. The only decisive game had ended in favour of the Dutchman two years ago at the Bilbao Masters tournament. This was Anand’s chance to seek revenge and equalize their all-time score. Alas, that was not to be. 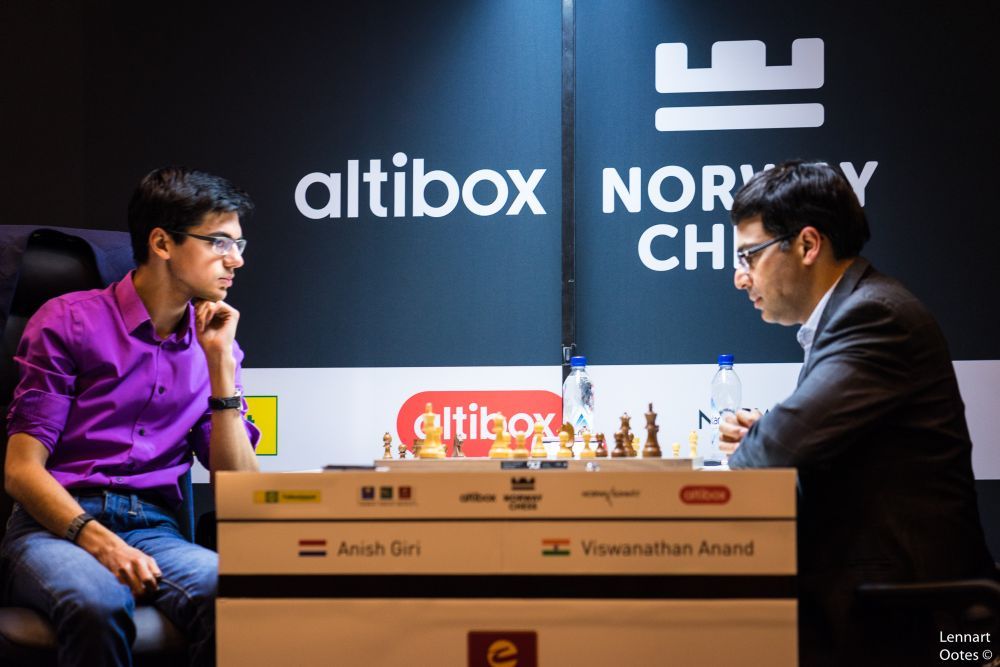 Anish’s had taken off his coat. A clear indication that he was out there for the kill

Giri played a line of the English opening which he had essayed against Alexander Grishchuk a few months ago at the FIDE Grand Prix. And although Giri was only able to draw that game, he had some improvements ready and went for it confidently again. Anand, who was probably aware of this, chose to deviate from Grishchuk’s choice of moves on the seventh turn with 7…Nc6. Despite Anand’s deviation, Giri was able to put enough pressure on the Madras tiger to make him throw in the towel. 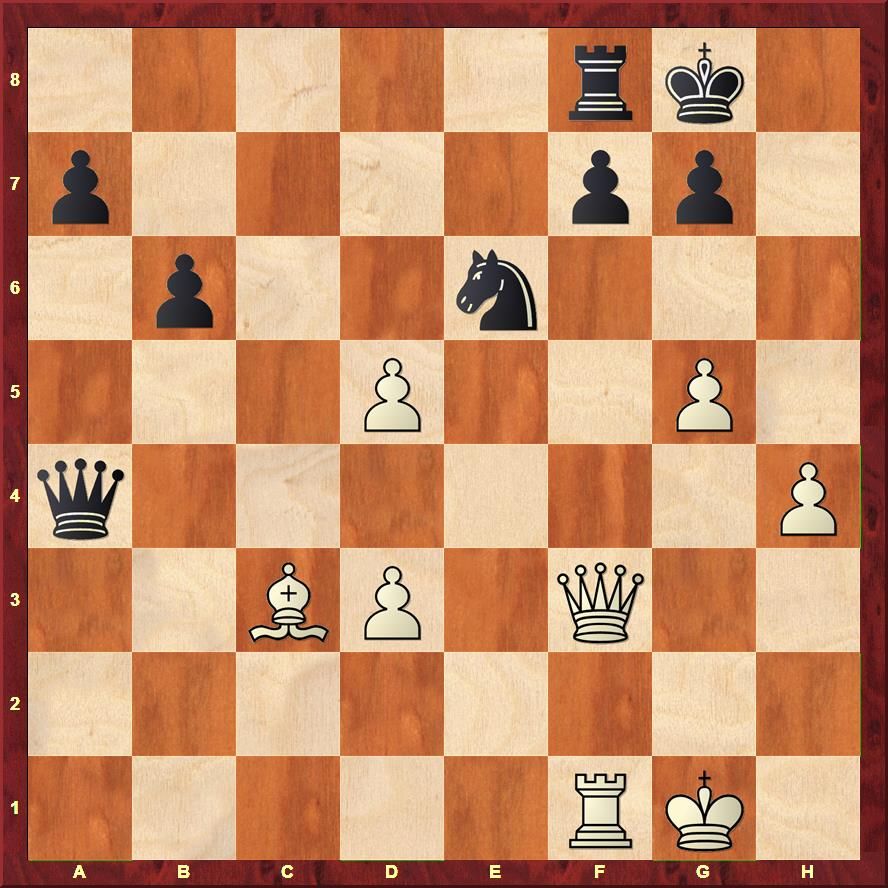 An interesting moment came on move 31 when Anand could have sacrificed his knight for three of his opponent’s pawns with ...Qxh4 and held good drawing chances. After the game, Giri himself mentioned this and gave a sample line to show that the Indian could have defended better. He further said that he felt fortunate that Anand did not play the knight sacrifice. Just two moves after this, that same knight of Anand’s was caught in a terrible pin and was about to be chopped off the board without any compensation. At this point, Anand had no option but to concede a full point to his opponent. 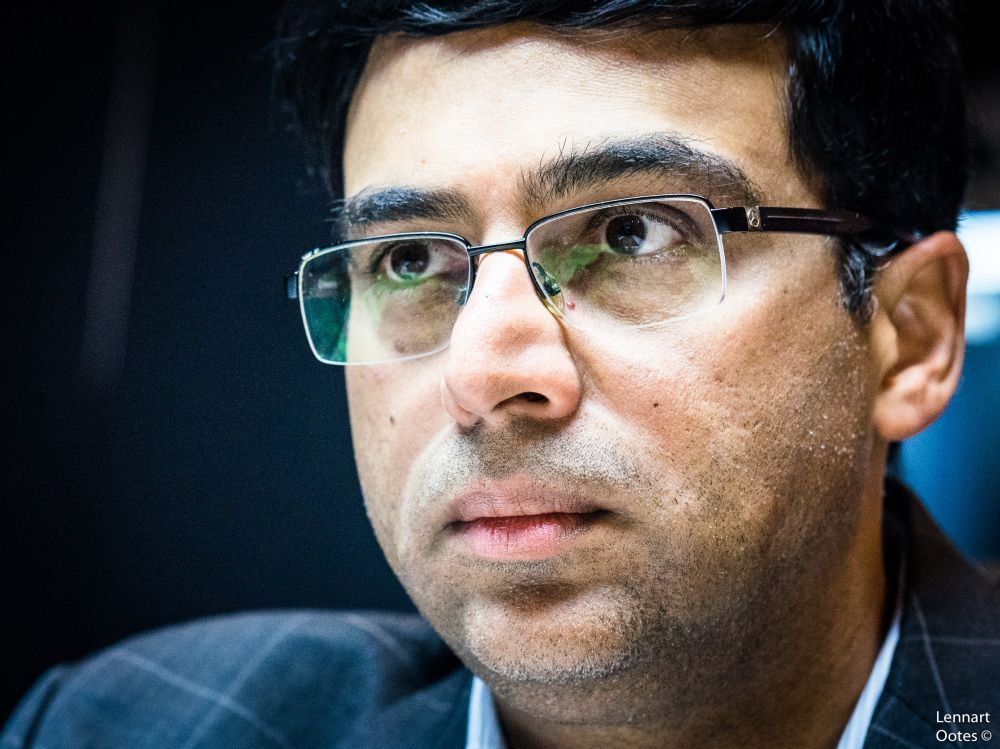 Vishy has had a dismal start to his campaign with 1.0/4

A few days ago Vishy suffered a defeat against Kramnik in the second round of the event. The five-time World Champion was naturally depressed. But he took out time and congratulated two Indian players Shashikant Kutwal and Jennitha Anto for becoming 17th IPCA (International Physically Disabled Chess Association) World Champions. That just shows what a wonderful person Vishy is.

My result yesterday was traumatic. Some cheer to see a fantastic person Jenita Anto take the world championship with a round to spare.(1/2)

To many more titles . You truly are an inspiration. #Jenita Anto# IPCA Slovakia pic.twitter.com/QL58MaqPRd 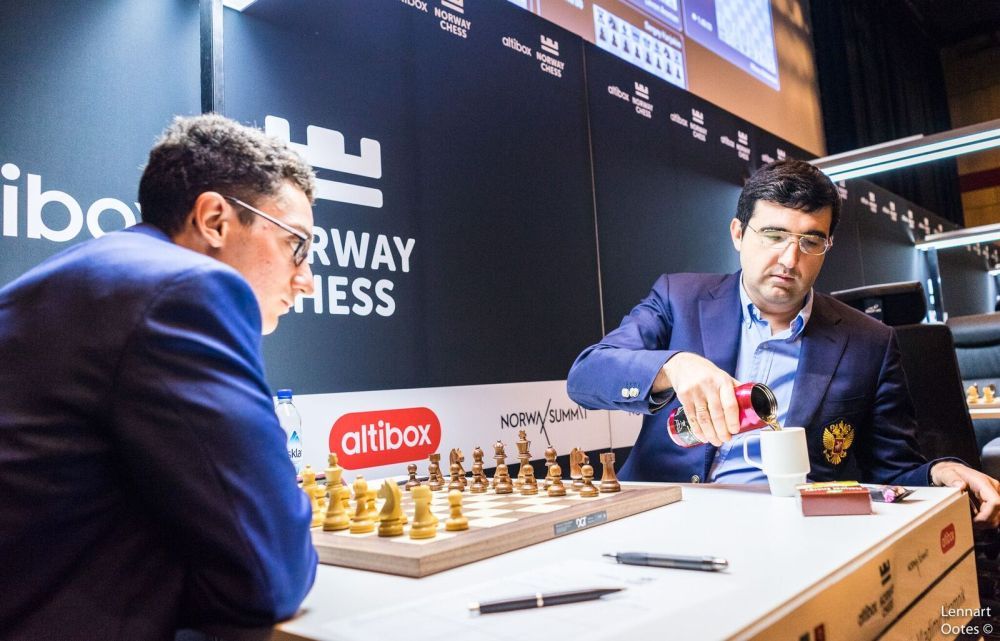 Caruana pressed hard against Kramnik, but the Russian with his secret drink did not budge

There were two draws in the round and both featured an American player pressing to convert his advantage. Interestingly enough, both of them were playing with the white pieces against Russian opponents. While the Italian-American GM Fabiano Caruana pressed against Vladimir Kramnik, the Filipino-turned-American, Wesley So, was unable to stop Sergey Karjakin from stalemating his own king. The game between Caruana and Kramnik was quite a complicated one. Even though the American had an advantage, Kramnik too had his trumps. In the end, Kramnik was able to open the king rook file and infiltrate into his opponent’s position to force a draw by repetition. 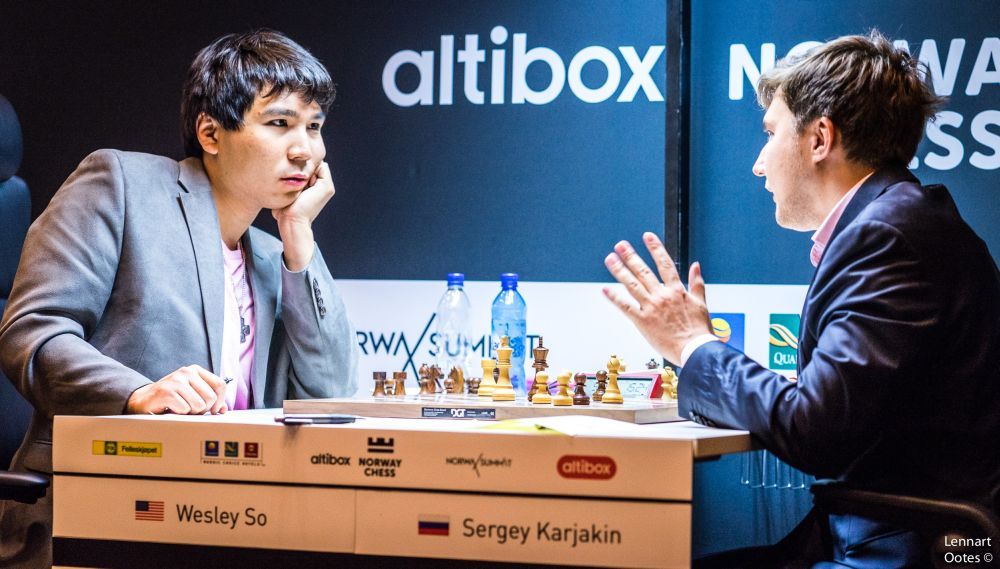 Wesley So, on the other hand, had quite a promising position but grabbed a pawn on c4 a bit too soon. Until this point, So had played immaculately, but his position was such that with this one slip, his advantage almost disappeared. As the game progressed, So tried hard to rebuild his advantage but Karjakin found a sneaky series of exchanges that stalemated his king at the end.

Two other wins of the round were scored by Hikaru Nakamura and Levon Aronian. Playing against Maxime Vachier-Lagrave, Nakamura chose the 6. Bd3 variation to counter MVL’s Sicilian Najdorf. It was in itself a bold move by Nakamura to go for the Najdorf given that the Frenchman is one of the world’s leading experts on the opening. But having chosen to play a very rare line in the variation, Nakamura was confident of getting good chances. The most exciting part about this game was that it featured an attack on opposite wings. While Nakamura flung all his queenside pawns forward in the hope of queening (at least) one of them, Maxime’s pawns stormed at Hikaru’s king to deliver checkmate. As play progressed, Vachier-Lagrave gave it his all and even sacrificed a knight to break through to the white king. But Nakamura defended tenaciously and succeeded in keeping his king safe while his pawns promoted on the other side of the board. 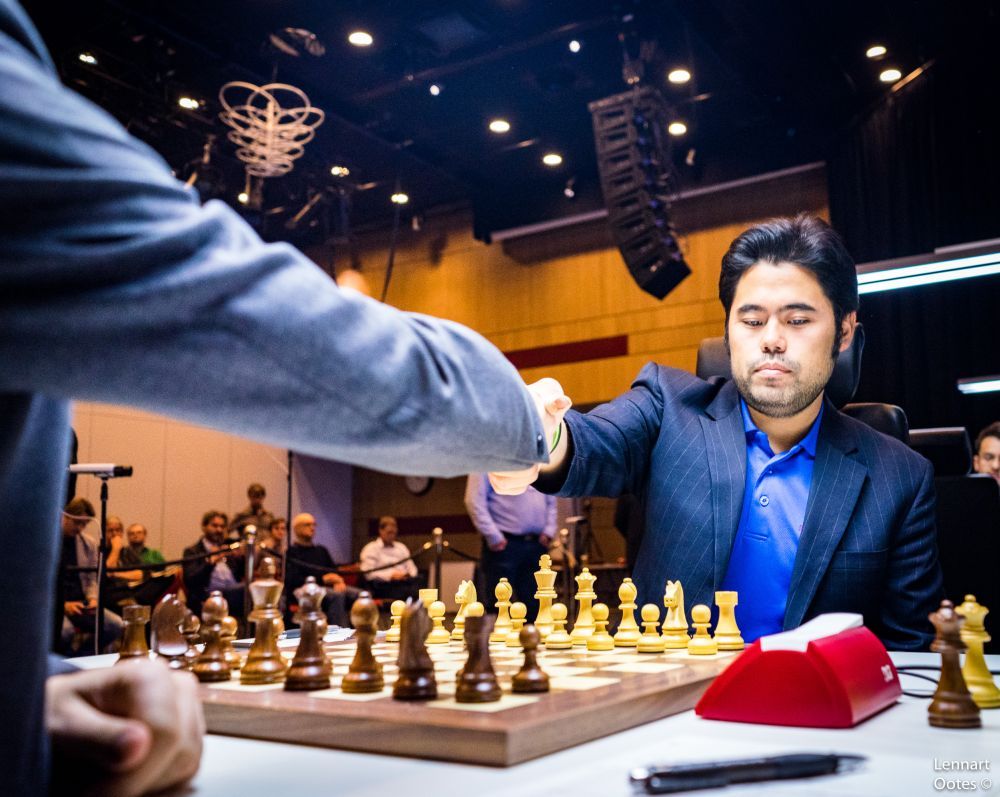 To beat MVL in a Najdorf is always a great achievement!

The Armenian number one, Levon Aronian played a gem of a game to get the better of World Champion Magnus Carlsen. Allowing his opponent to win a pawn on the queen rook file, he continued daringly by sacrificing an exchange to jail Carlsen’s queen behind his pawn chain. While the World Champion made attempts to free his imprisoned queen, Aronian struck on the other side of the board with a strong bishop sacrifice to rip open black’s king. And although Carlsen defended vigorously, Aronian kept attacking on all sides of the board and eventually succeeded in bringing the World Champion on his knees. After the game, the Armenian GM was in high spirits and said he thoroughly enjoyed playing the game. 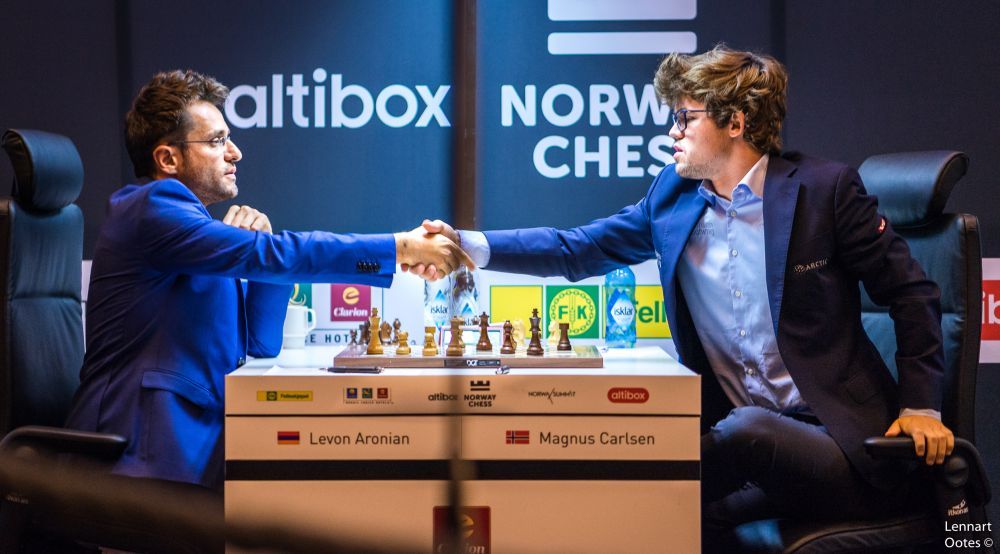 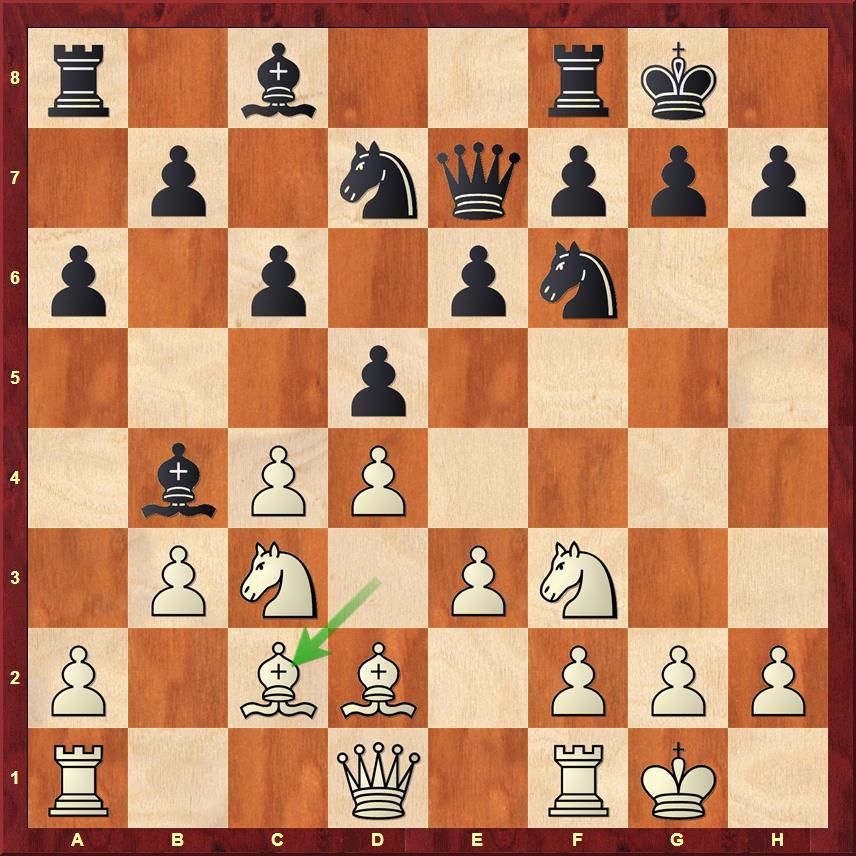 The move Bc2 was the novelty essayed by Levon Aronian in the game. The idea is quite deep. Aronian would like to play a3 on the next move when after Bxa3 Rxa3 Qxa3 he would like to close the position with c5. However, if the bishop were on d3, then after a3 Bxa3 Rxa3 Black has the intermediate dxc4! and the plan doesn't work! Hence Bc2!? 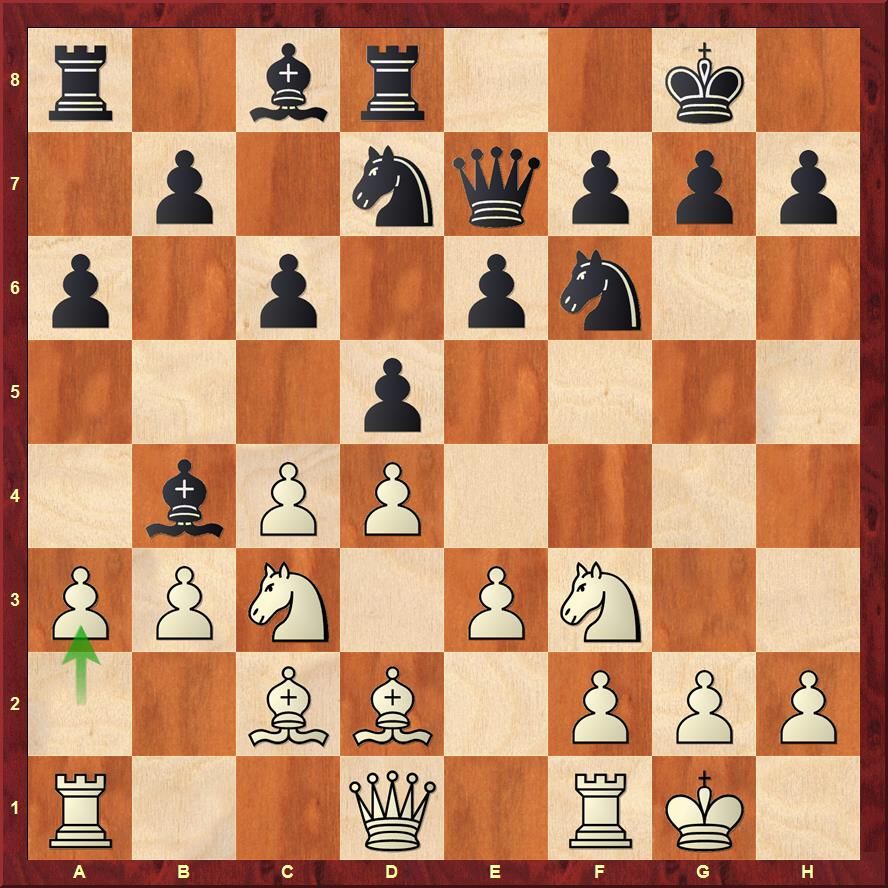 Not only sacrificing a pawn, but also an exchange to trap the queen on the queenside! 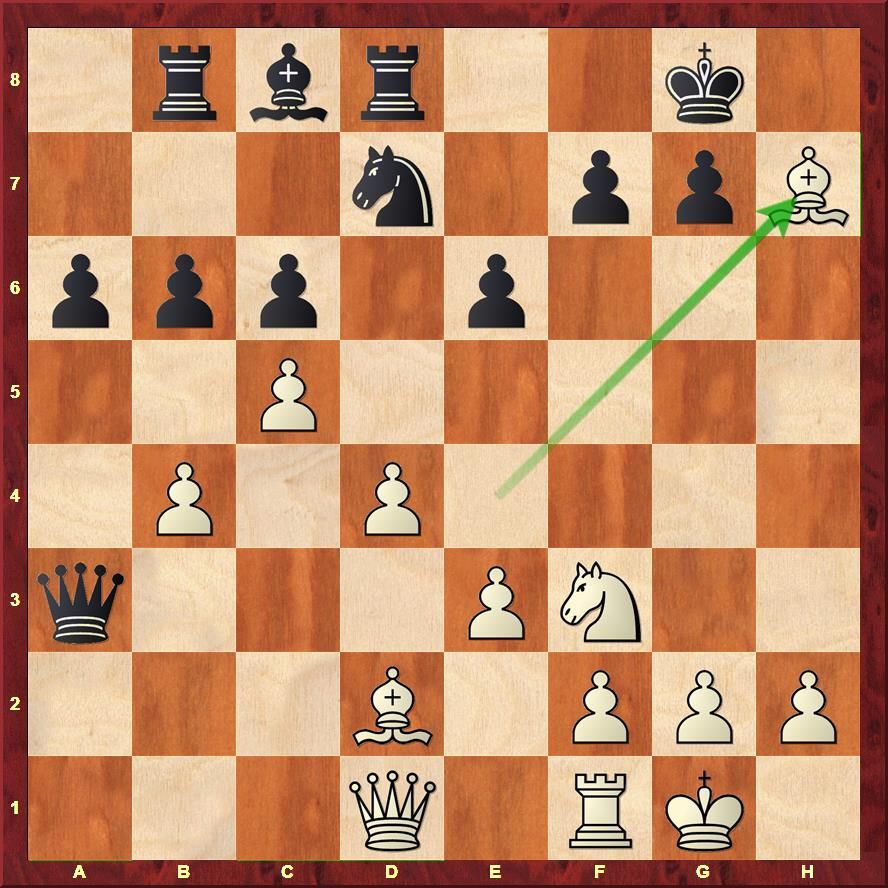 And while Magnus was grappling with what was happening to his queen, on the other wing, there was suddenly a blow against his king! A greek gift sacrifice is not such a common phenomenon at the highest level! 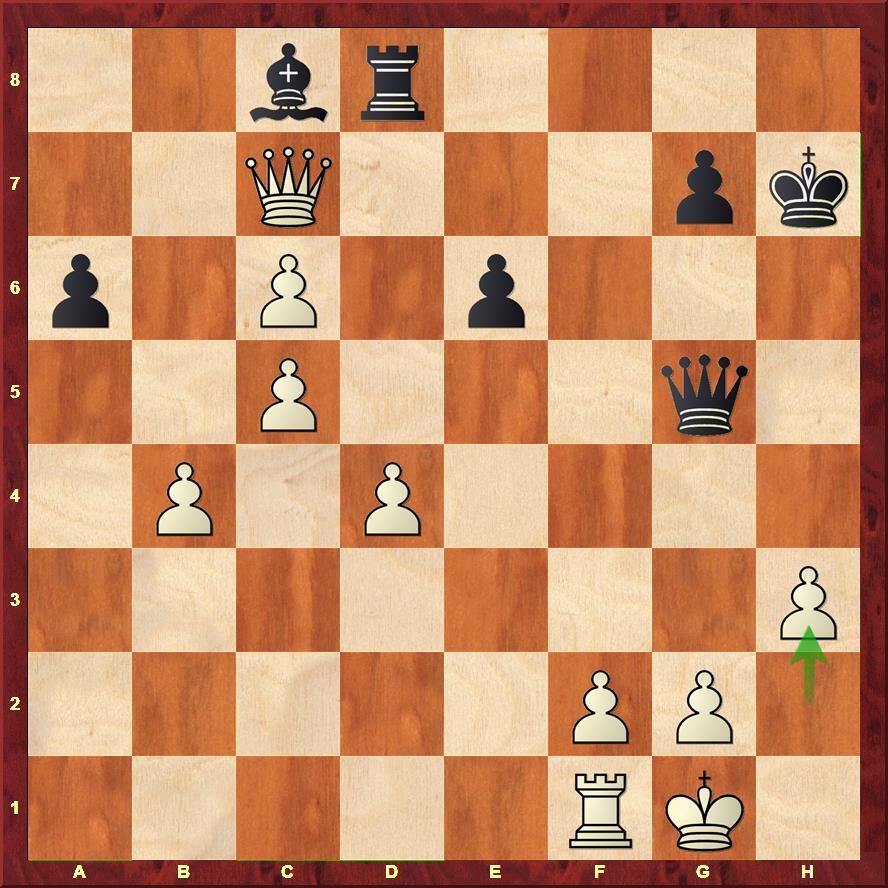 A nail in Engine's coffin

One masterpiece follows other. If Ivanchuk's exchange sac was found to be a very rare occurrence, and made us very happy, then Aronian took us a century back in his demolition of Carlsen, yesterday!

The precursory 12.Bc2!? and innocuous looking new move sowed the seed for this masterpiece and lead to the position where White parts with his a-pawn. Carlsen's style is akin to Fischer or Korchnoi. If they do not find any visible inconvenience, they will not hesitate to grab whatever is offered!

Aronian then offered exchange and shut out Black Queen from returning back! Then came the age old "greek gift" and by now even the finely tuned World Champion's mind had enough to wilt and go on a downward spiral. Sure, there must have been a way earlier. Possibly the exchange sac may also be disapproved by the engines. But what matters most is that it prevails over another human mind. however great he is!
Games like these enliven chess and here lies the future of chess and its sustenance! 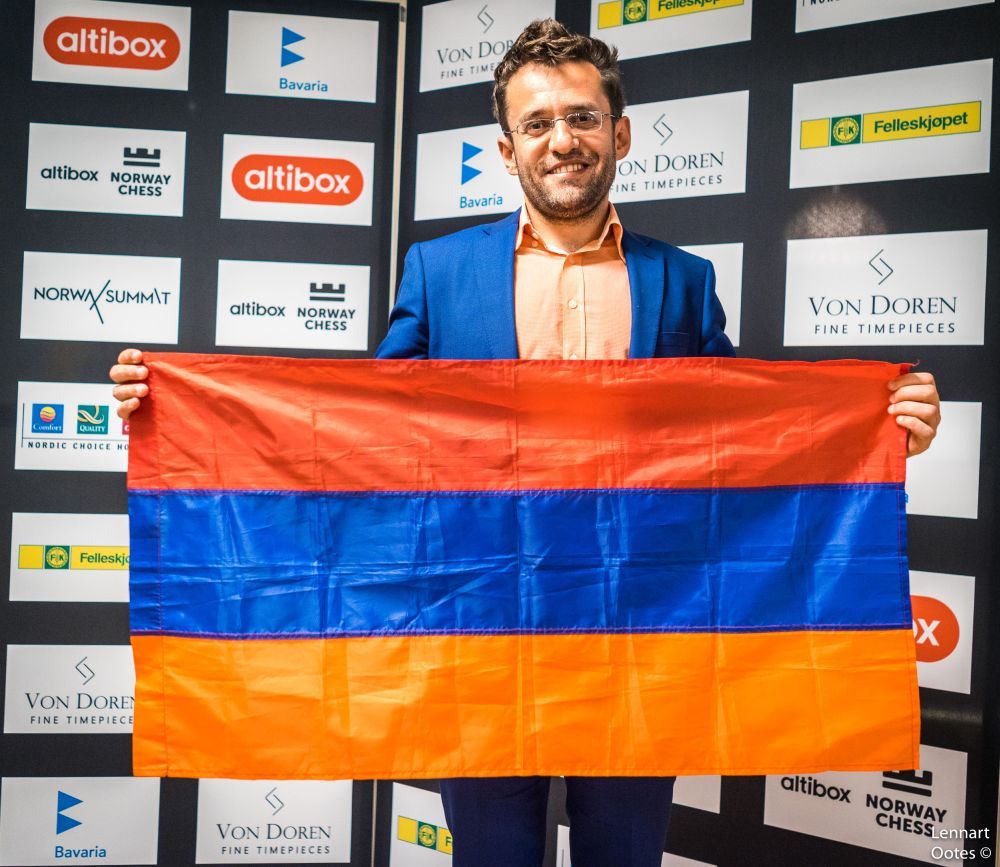 A proud Levon Aronian with the Armenian flag

The tournament has almost reached the midway mark by now. After four rounds of play, Hikaru Nakamura has been able to maintain his lead and is moving forward steadily with a score of 3.0/4. With his scintillating win today, Levon Aronian is sharing second spot with Vladmir Kramnik with 2.5/4. Anish Giri, who was at the bottom of the table along with Vishy Anand before the start of this round, has moved up to a shared third spot along with Caruana, So and Karjakin . All of them have scored 2.0/4. Vachier-Lagrave and Magnus Carlsen share the fourth spot with 1.5/4 while Anand, with his loss today, is at the bottom with 1.0/4. Things are looking grim for Anand at the moment but with five more rounds to go, he still has ample opportunity to stage a brilliant comeback.