Pentala Harikrishna had been chasing the leaders all through the first five rounds of the Geneva Grand Prix. In round six, he was paired against the Armenian superstar, Levon Aronian. Keeping in mind that his opponent was Aronian and that he had the black pieces, it was hard to predict that Hari would emerge victorious and join the top rankers of the leaderboard Radjabov and Grischuk. But the Indian ace did it! A detailed report and game analysis by Tanmay Srinath.

Yesterday was quite an eventful one at the third leg of the Grand Prix series in Geneva. Coming back after a rest day, the players seemed to be full of energy and did their best to capitalise on the smallest of errors of their opponents. Five out of the nine games ended decisively, which is the highest in the tournament so far. India’s Pentala Harikrishna went all guns blazing at his round 6 opponent Levon Aronian. The Gunthur-based Grandmaster had the black pieces against the Armenian megastar who kicked off with an English Opening which went into the lines of the Reversed Sicilian Dragon later. Interestingly, Alexander Grischuk had essayed the same line with the black pieces against Pavel Eljanov and had won the game. But Hari decided not to repeat Grischuk’s preparation and deviated on move 6. Posting his pawns in the centre, Hari played in a very principled manner in the opening phase. 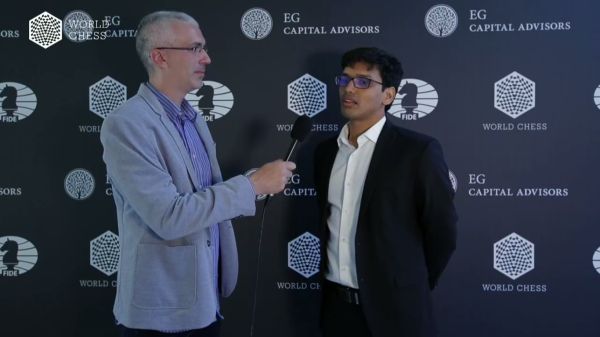 Harikrishna knew he had to be careful not to let Levon slip away with a draw
Transitioning into the middle-game, Aronian had a slight edge – a perk of having the white pieces. As is common for the Dragon, the Indian then went on to generate an attack on the kingside while Aronian sought counterplay on the queen’s wing. In his post-game interview, Hari mentioned, “I think the critical mistake – unless the computer claims otherwise – was 20. f4”. Aronian faltered again on his 21st and 22nd moves, after which his position had more holes than Swiss cheese. In the next few moves, Hari was able to improve his position further by manoeuvring his knight via the e5 square. At the outset, the square looked taboo for the knight but because of the counterplay Hari would have got had the knight been captured, it was immune. The Indian number two then went on to launch a strong attack on the white king by bravely marching his kingside pawns forward.  To resist the attack, Aronian had to shed a pawn. In no time after this, Hari was able to force an exchange of queens and march his extra pawn forward with decisive effect. Unable to stop the pawn from queening, the Armenian GM called it quits on the 38th move.
[Event "FIDE Geneva Grand Prix 2017"]
[Site "Geneva"]
[Date "2017.07.12"]
[Round "6"]
[White "Aronian, Levon"]
[Black "Harikrishna, Pentala"]
[Result "0-1"]
[ECO "A29"]
[WhiteElo "2809"]
[BlackElo "2737"]
[Annotator "Tanmay Srinath"]
[PlyCount "76"]
[EventDate "2017.??.??"] 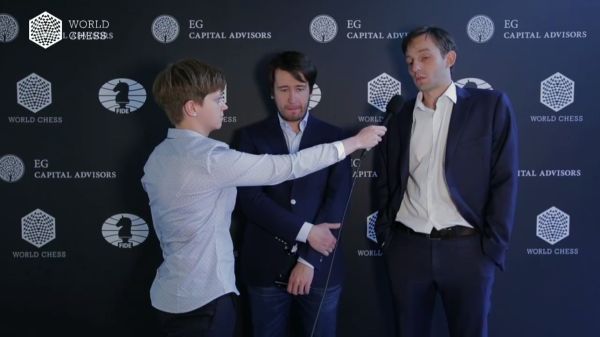 Tournament leaders Alexander Grischuk and Teimur Radjabov faced each other in round 6.
With this win, Harikrishna has joined Alexander Grischuk and Teimur Radjabov in the lead. The two were pitted against each other in yesterday’s round but neither of them was able to crash through his opponent’s defences. After playing 40 moves of a Sicilian Rossolimo, they decided to repeat the position and sign peace. 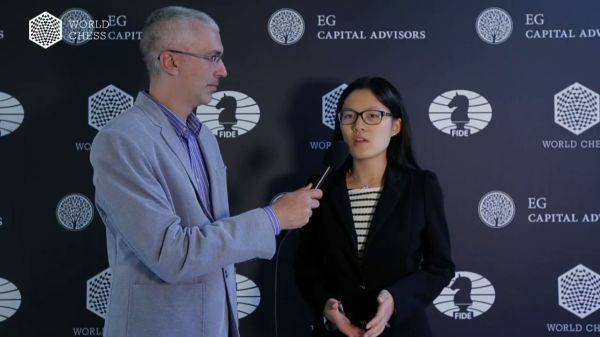 Hou Yifan won her first game of the tournament
The only lady in the tournament, Hou Yifan, clinched her first win of the tournament against the Emirati GM Salem Saleh. Coming back from two loses after the rest day, she said in the post-game interview that she was looking to play more solidly rather than going all out for a win. Playing on the black side of an Italian Opening, the Women’s World no. 1 was able to get a pleasant position out of the opening. Building up on her edge acquired in the opening, she went on to get a much better position by the middlegame but a few inaccuracies on her part made her advantage almost evaporate. However, trying to find the best defensive moves, Saleh had spent a lot of time and struggled to make it to move 40 in the stipulated time. Playing hastily – perhaps, hoping for a repetition – he moved his queen back and forth and allowed Yifan to break through decisively on the kingside. 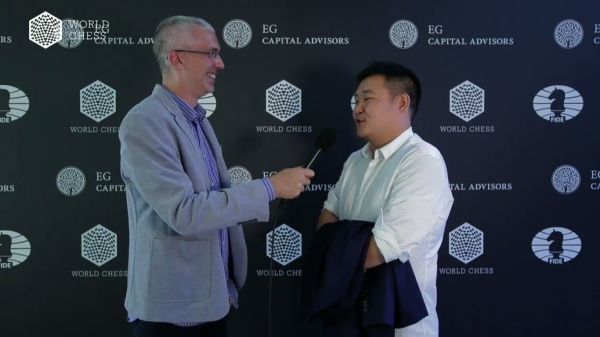 And so did her compatriot, Li Chao

Yifan’s countryman, GM Li Chao, also won his game against the Ukrainian GM Pavel Eljanov. The game opened with a Queen’s Indian Defence in which Eljanov missed a tactical shot in the opening and gave his opponent a significant advantage. Chao kept playing energetically after this and never let his opponent get a chance to come back in the game. By the 35th move, Chao was able to catch Eljanov’s king in a mating net. To avoid mate, Eljanov would have had to give up a piece and still remain in a hopeless position. Cutting short his troubles, the Ukrainian decided to resign at this point.

The round featured two more decisive games. Ian Nepomniachtchi won his game against Ernesto Inarkiev and hopped into the pack of players on the second spot. Alexander Riazantsev got the better of the Hungarian GM Richard Rapport. Rapport – as is characteristic of him – played an irregular opening with the white pieces and came up with some mystical manoeuvres with his heavy pieces. After a few skirmishes in the middlegame, the players reached an endgame where Rapport had to deal with Riazantsev’s far advanced king rook pawn. Although the material on the board was equal, this turned out to be an insurmountable task for Rapport. By the 58th move, the Hungarian was forced to resign as his king was caught in a mating net.

Of the four draws in the round, Peter Svidler’s draw against Grand Prix leader Shakhriyar Mamedyarov was the most entertaining. With whites in hand, Svidler chose the Neo Catalan to open the game and sacrificed a piece on move 18 to rip open Mamedyarov’s king. But before Svidler could execute his attack, the Azerbaijani GM returned Svidler his extra piece to trade queens and thereby secure his king. In the endgame, both players had sufficient piece activity. Hence, Svidler decided to force matters by perpetually checking his opponent’s king and sign peace. 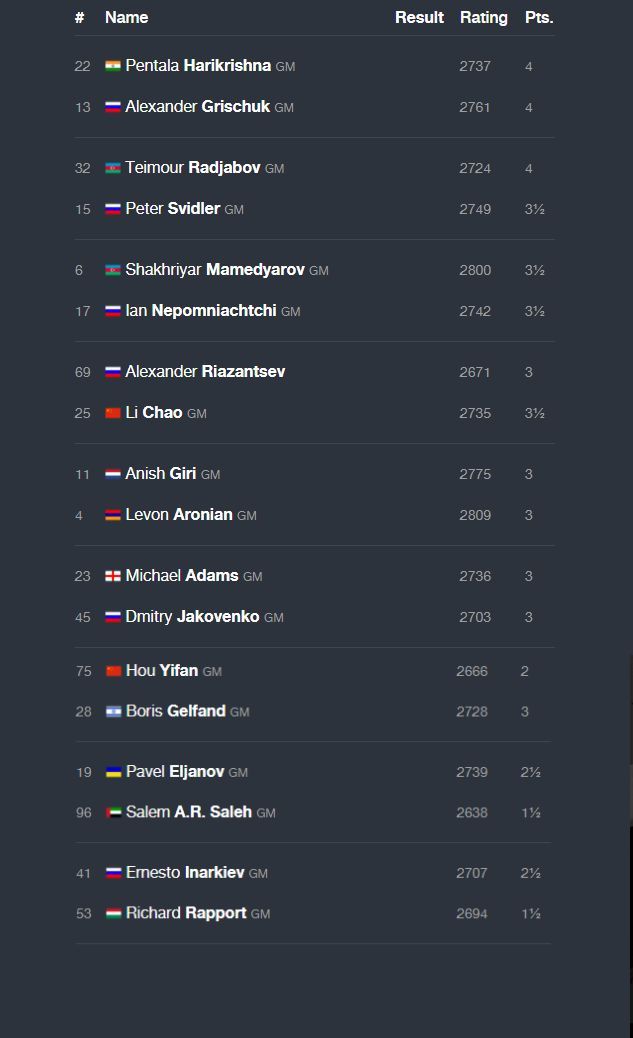 Round 6 pairings with results

After 6 rounds, three players – Radjabov, Grischuk and Harikrishna – are leading the tournament with 4.0/6. A gnat’s hair away are Mamedyarov, Svidler, Nepomniachtchi and Li Chao with 3.5/6. A six player pack including Giri, Aronian, Adams, Gelfand, Jakovenko and Riazantsev share the third spot with 3.0/6. Eljanov and Inarkiev are fourth with a score of 2.5/6. Hou Yifan is in the second last place with 2.0/6. Richard Rapport and Salim Saleh are at the bottom of the table with 1.5/6. 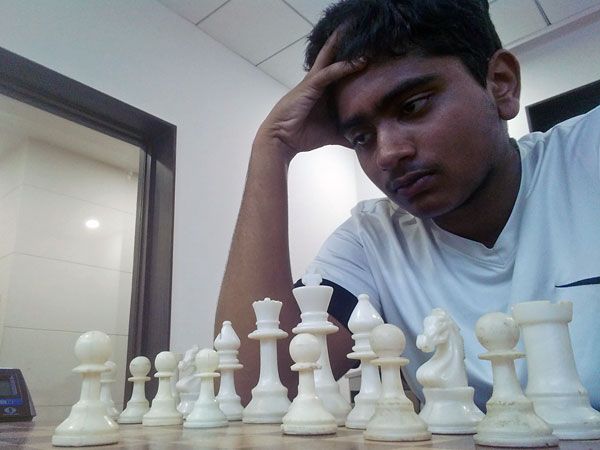 A special thanks to our contributor Tanmay Srinath for sending in insightful analysis of Harikrishna's game.