The thing about champions is that they never ever fail to make a comeback. After a tough loss against Yilmaz, Adhiban found himself facing a stronger opponent in the seventh round in the form of Anton Korobov. He played a fine game to beat his Ukrainian opponent and give India the much needed 2.5-1.5 victory. In the women's section we were trailing 2-1 in the match against China, but Padmini showed her class, and beat Guo Qi in an equal endgame to level the scores. Analysis of both these games, and a small flashback to Baku 2016.

Let's go down the memory lane a bit. The date was 11th of September 2016. It was the ninth round of the Chess Olympiad held in Baku. The Indian team was pitted against Ukraine. It was a crucial match for us from the medal point of view. 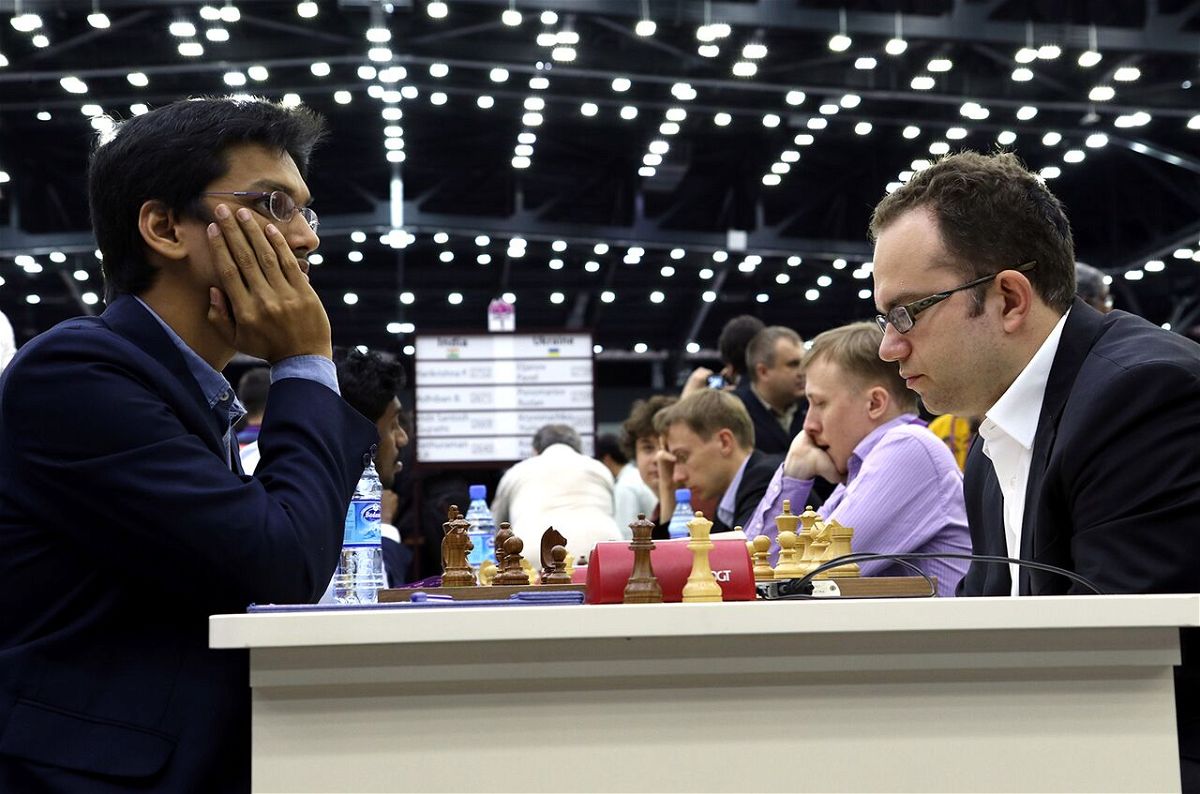 Harikrishna on the top board drew his game against Eljanov. Adhiban and Vidit held Ponomariov and Kryvoruchko. It all hinged on Sethu's game against Anton Korobov. 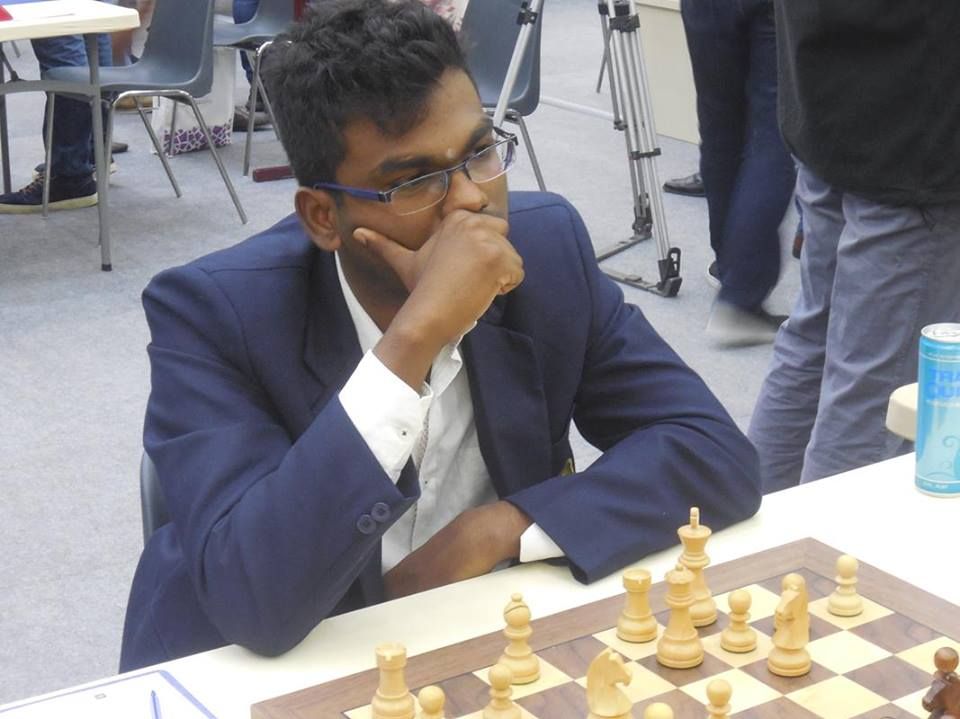 Sethuraman built up a winning advantage 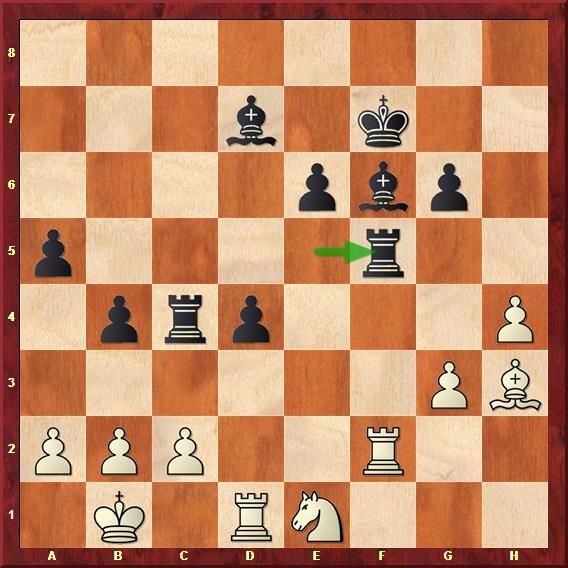 With the move ...Rf5!?!? Korobov muddied the water to such an extent that Sethuraman went wrong and India lost the match 2.5-1.5 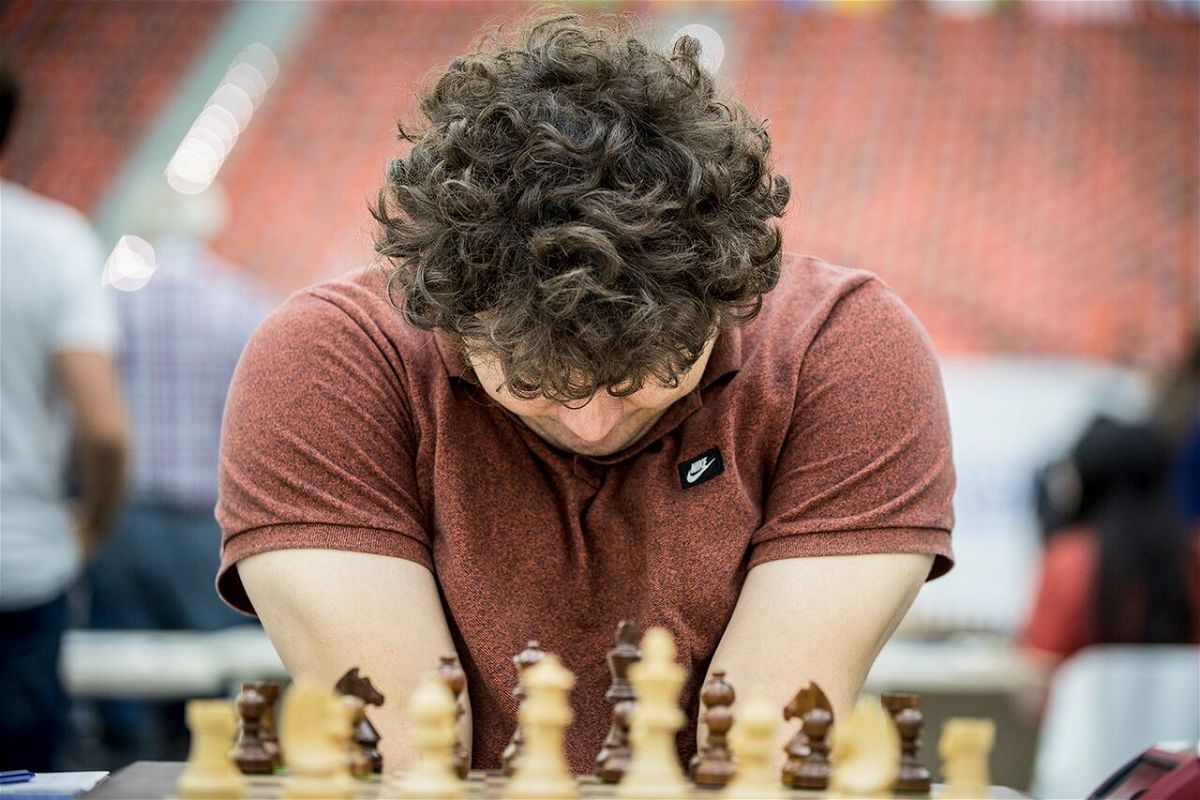 Fast forward to the present:

India was facing Ukraine in the seventh round of the World Team Championship 2017. Three boards ended in draws once again. Vidit held Ponomariov on the top board, Sasi quickly split the point with Areshchenko from the black side of the Marshall and Negi had some edge against Moiseenko but the game ended in a draw. Once again Korobov was in the thick of the action, but this time against B. Adhiban. 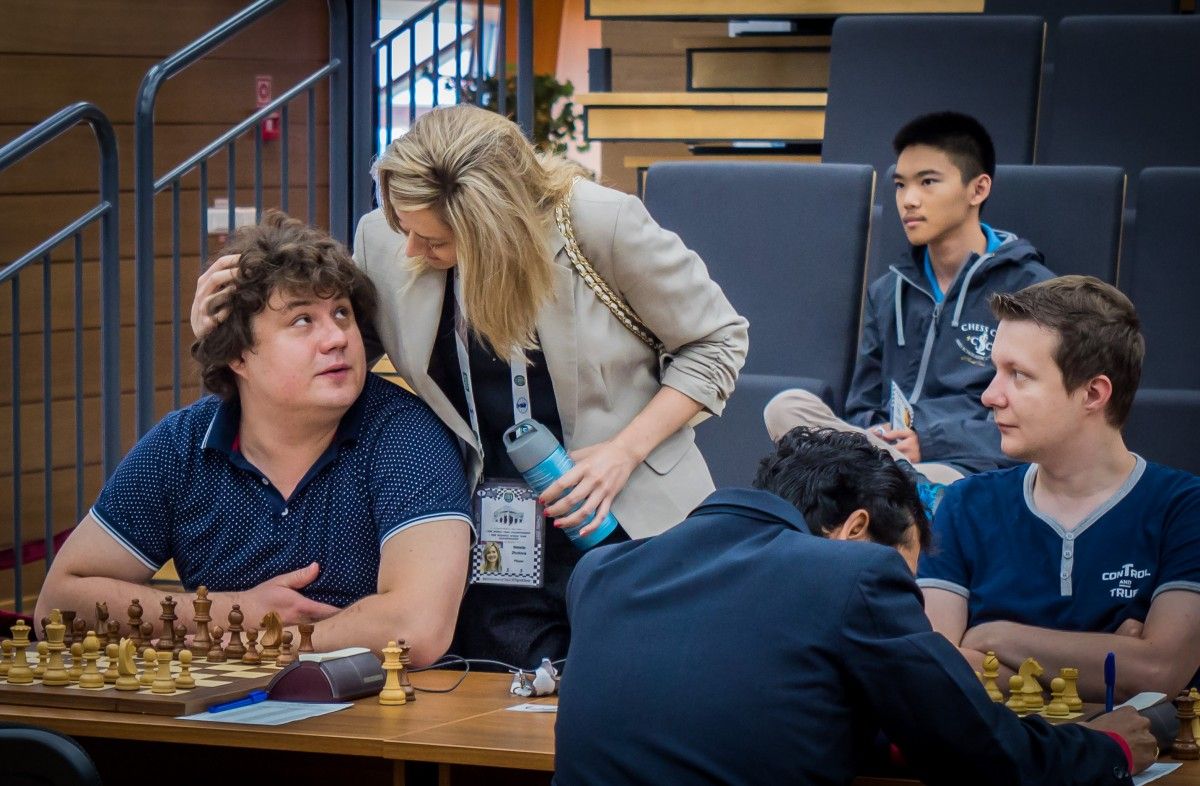 "Let's have a Baku encore!" Anton Korobov getting some good wishes from Natalia Zhukova before the start of the game 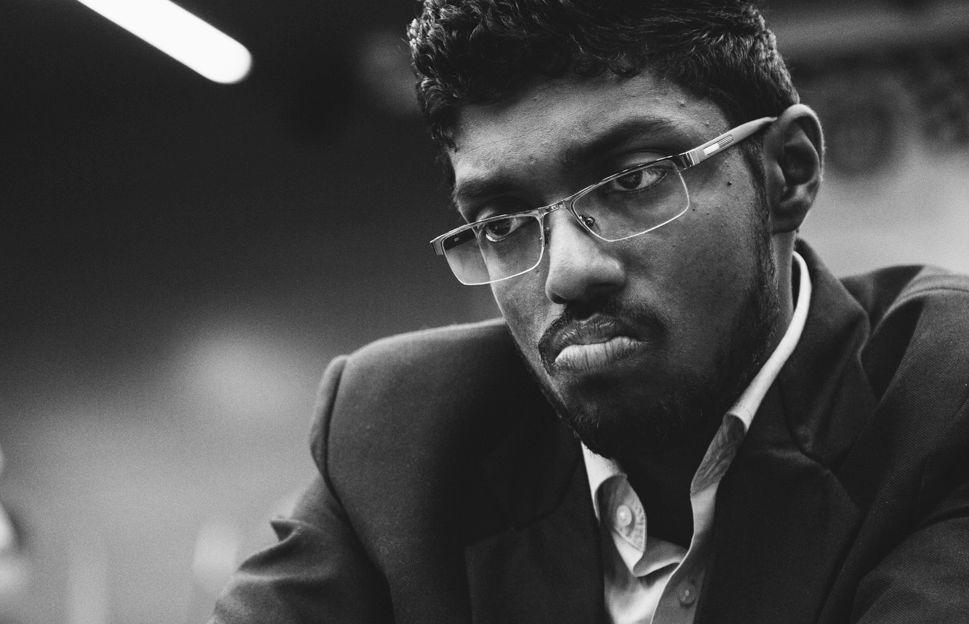 But this time Adhiban had different intentions! 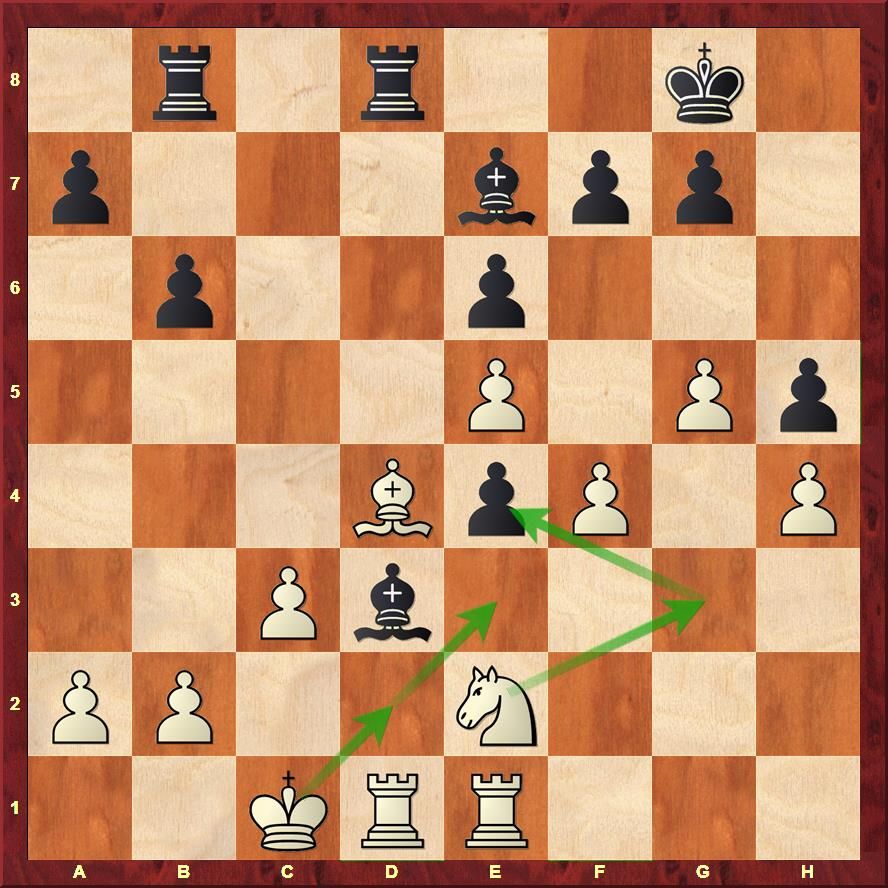 When you look at this position, you feel that Black should be fine. But this is a static situation where White has many ways to strengthen his position, while Black is at a loss for what is to be done. Hence, Kd2-e3 followed by Ng3 led to a loss for Black and Korobov was left wondering what was it that he could have done better!

For board wise break down, click here. India now faces Russia in round eight.

India has climbed one spot on the rankings list. The Russian team lost against China and now the Asian super giants are in the lead. India faces Russia today and if we beat them we are sure in with a chance for a podium finish. 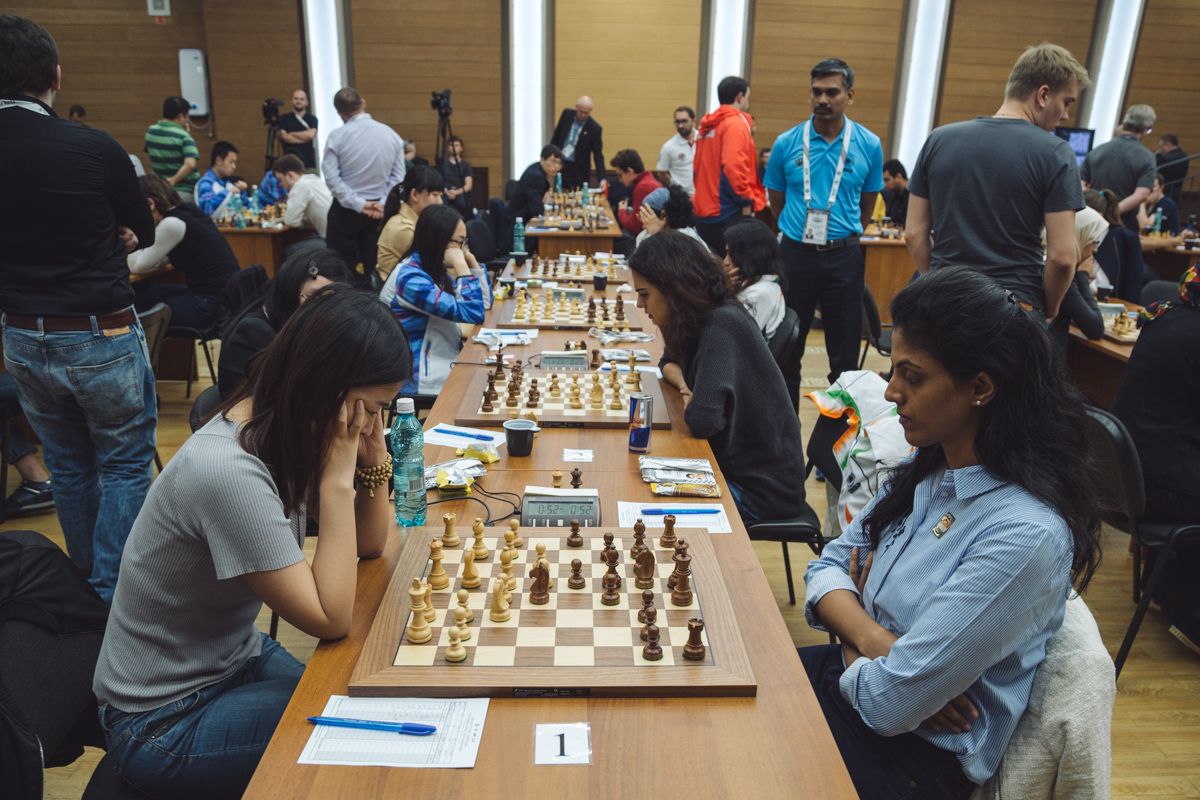 India faced the strong Chinese team in round seven. Harika was solid on board one and drew her game against World Championship Challenger Ju Wenjun. On board two Tania held the World Champion Tan Zhongyi to a draw quite easily. One could argue that with the additional space, and risk free position, Tania should have played on. It would have put some pressure on the Chinese players. Eesha was outplayed by Lei Tingje (who is having a wonderful event with a score of 6.0/7). Once again the onus was on Padmini to deliver. 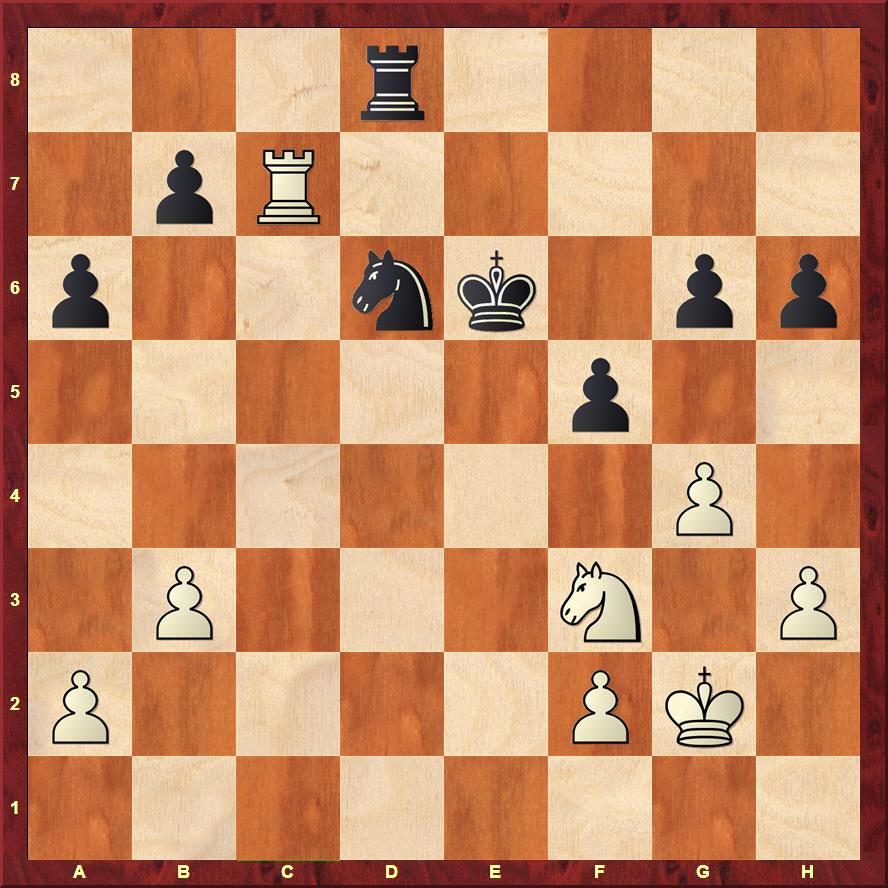 What separates her from the rest is her self belief and sheer will to win! Padmini Rout - you are a great fighter!#WTCC2017 #ugrachess pic.twitter.com/aekD2yzy5f

The chances of Indian team winning a medal grows slimmer by the day. It's true that the teams we are left to face are not the strongest, but Russia and Ukraine have taken an insurmountable lead. As for China and Georgia, one of them will make it to the podium it seems. Our only hope is for two match wins, and some miracle that China and Georgia falter big time.