The Indian men's team showed what they are really capable of. They ruthlessly demolished USA 3.5-0.5. Adhiban, Sasikiran, Negi scored wins over Akobian, Robson and Xiong. Vidit drew his game against Onischuk. This was the second consecutive win for the men's team. The women's team also delivered. After the scores tied at 1.5-1.5, Padmini Rout rose to the occasion and scored a fine win to give India a 2.5-1.5 victory over Poland. We have all the four games annotated in depth with key positions and explanations.

It's true that the USA team wasn't at their full strength. So, Nakamura and Caruana were busy playing at the Norway Chess. Yet, with a rating average of 2673, the American team was far from being a pushover. The top board Samuel Shankland was rested for the encounter. Now, Onischuk, Akobian, Robson and Xiong can give the best of the teams a run for their money. But on Tuesday, they were absolutely clueless. Only Onischuk on the top board could manage to eke out half a point against Vidit Gujrathi. That too, after being a pawn down and under great pressure for nearly fifty moves. Let's have a look at the three wins now! 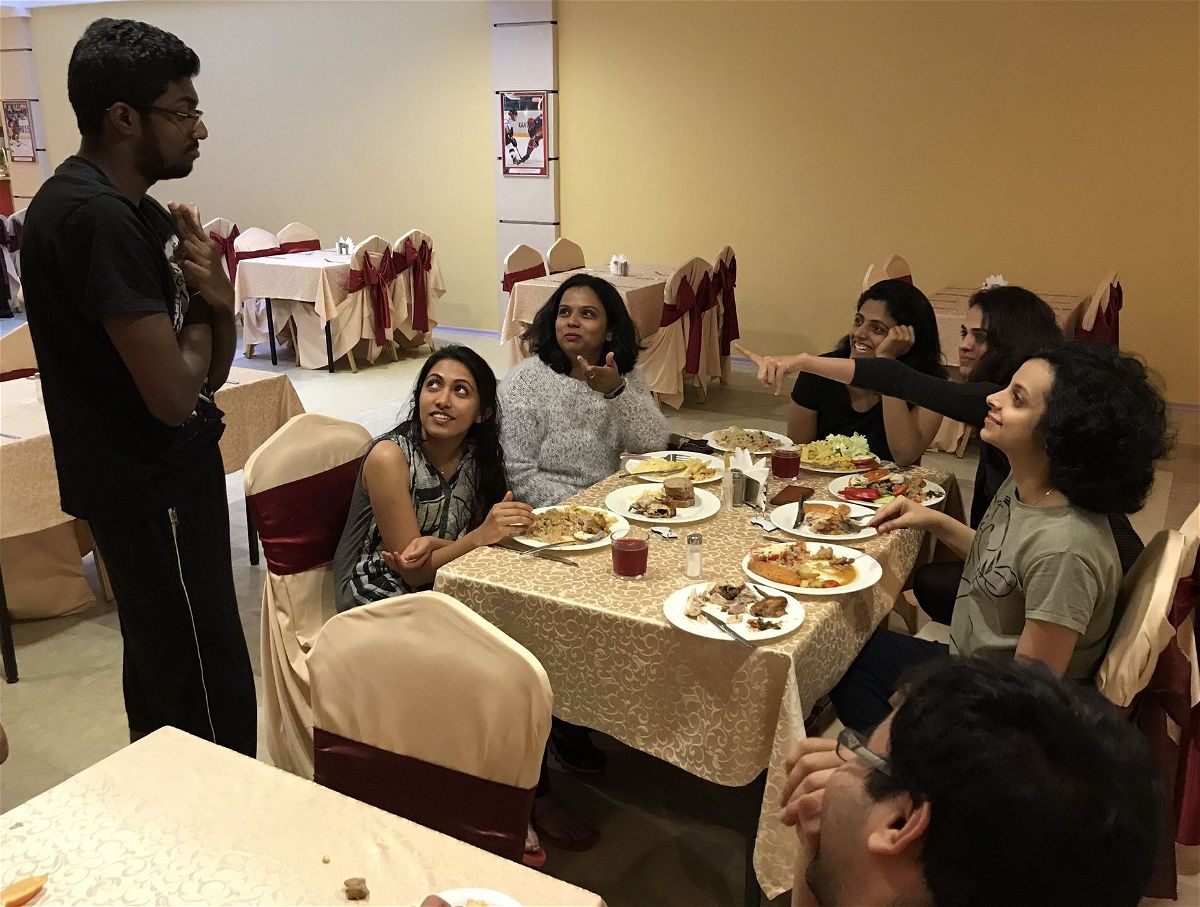 Adhiban's beast mode is on! The Indian women's team is in awe!
Adhiban began with two losses in this event. The logical thing to do would have been to rest him for a round. But coach Ramesh put faith in Adhiban's abilities and let him play the third round. The boy from Chennai delivered and India beat Belarus. Once Adhiban is in form, it is quite difficult to stop him and Varuzhan Akobian must have felt it in the fourth round! 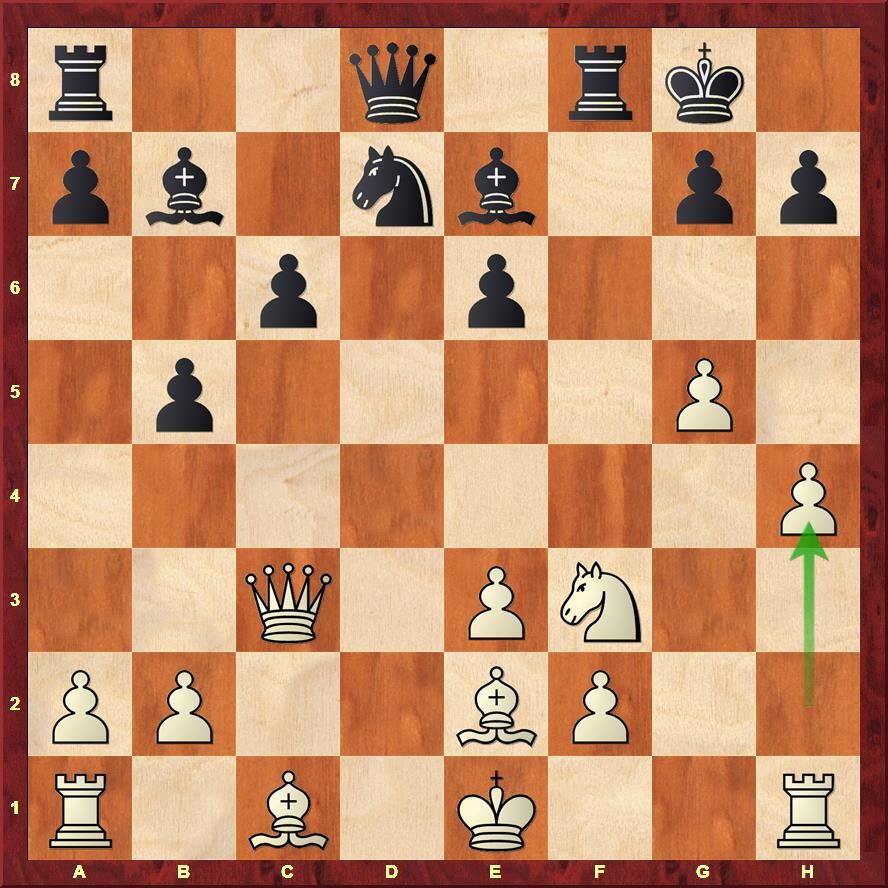 White's play at best can be called over ambitious. His king is in the centre and pieces undeveloped. How did Adhiban (black) finish off his opponent?

The geometry is just tremendous! Adhiban took the knight on f3 with ...Rxf3. And after Bxf3, he came up with the nice little ...Qf8! threatening Qxf3 and Bb4 pinning the queen. This move Qf8 is easy to miss. White went Ke2 and after b4, White had to stop Ba6. So he went Qc4 and Adhiban struck with Qxf3+! with Ne5 fork coming up! Replay the game below.

Sasikiran's brilliant preparation in the forests of Meran!

While the match was in progress I was chatting with GM Vishnu Prasanna. We enjoyed Adhiban's brilliant combination together and when we moved to Sasikiran's board, Vishnu said, "Sasi is very dangerous against the Slav." And it is true. When I was Sasi's team mate at the Maharashtra Chess League in 2016 I realized what phenomenal preparation Sasi had against the Slav. He had worked tons of hours on different lines. I am sure that he also had similar notes against different openings! Just that four days were too less a time to see the work of a player who has been toiling since the past 25 years! 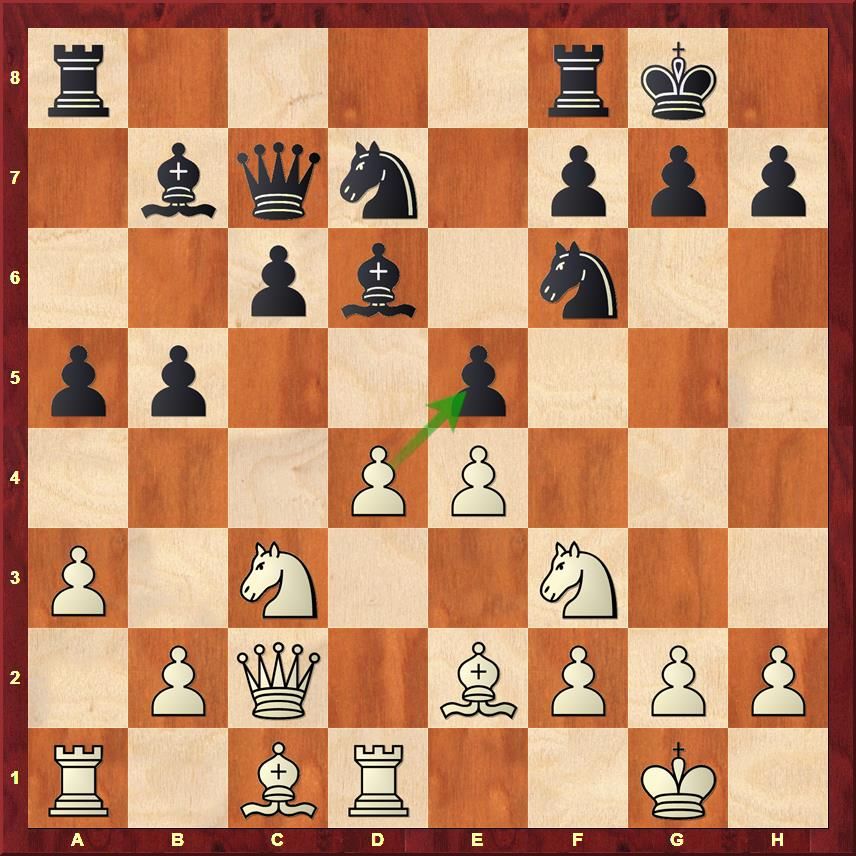 Until this position we have the game between Nakamura and Giri from Bilbao Masters 2017. Nakamura went g3 here. Sasi's dxe5 has been played in only one game before and that too was a correspondence game! 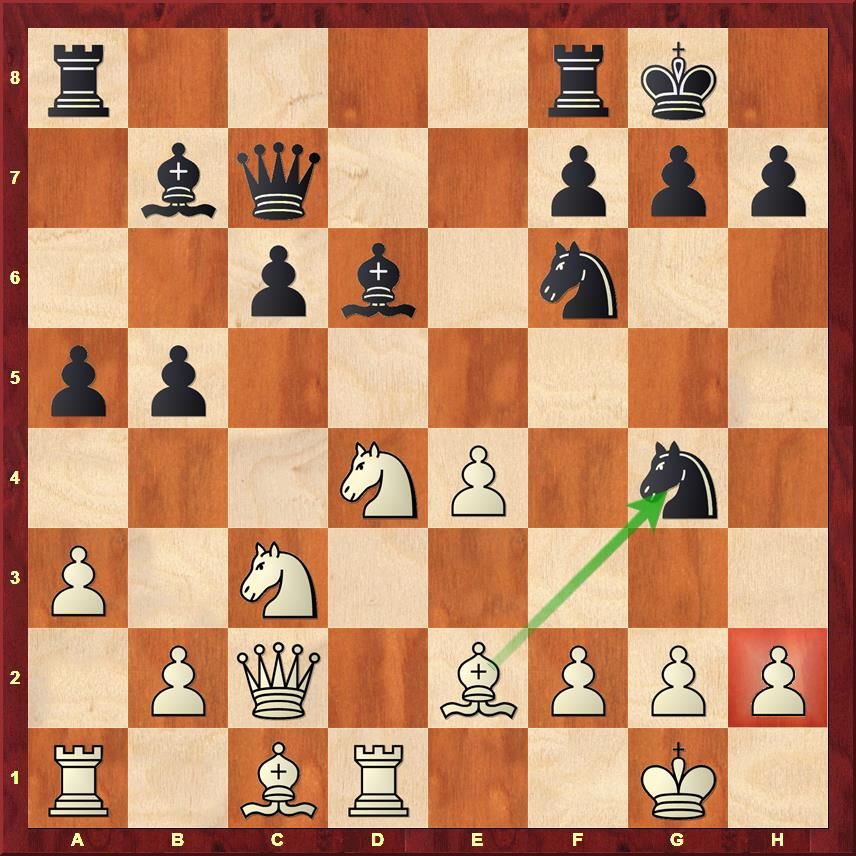 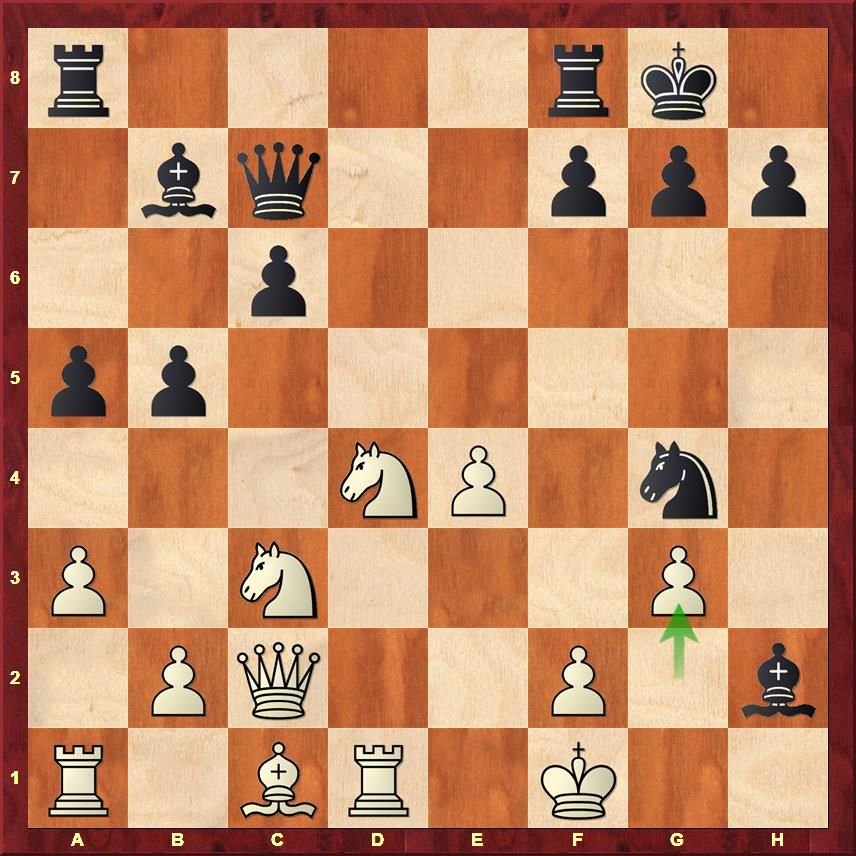 As Sasikiran would say, "This is no longer logical chess. This is opening preparation. You have to work on such positions before the game." 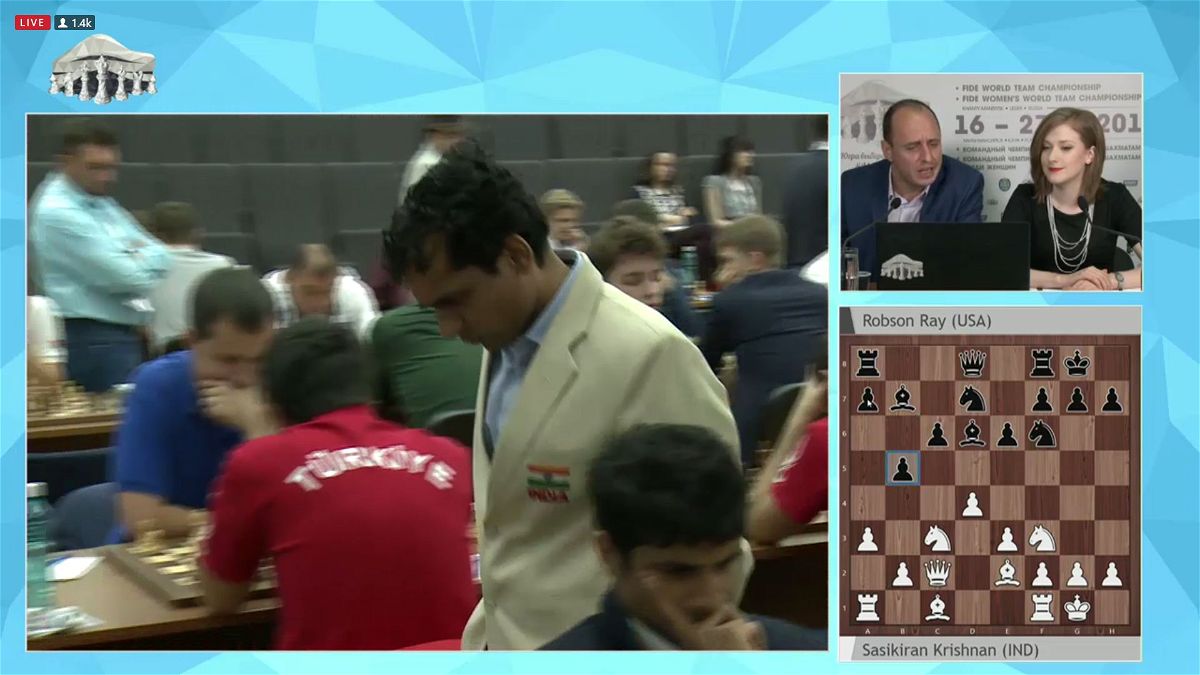 An extremely complex and high level game, you have to agree. 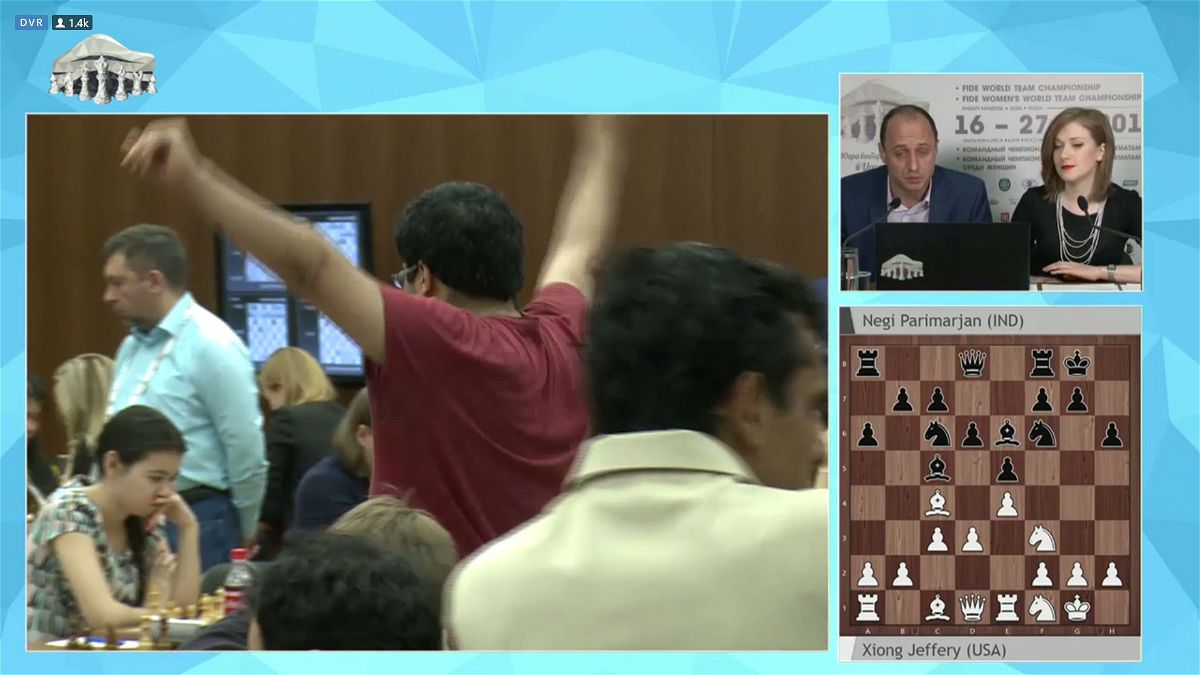 A relaxed Negi exercises between the round in the playing hall!

On the fourth board of the match between India and USA was a duel of contrasts. On the white side was a young 16-year-old boy, who is the current World Junior Champion and the next big thing in the world of chess. Playing black was the third youngest GM in the history of chess, who has now retired from competitive play (!) and is a sophomore at Stanford. It is obvious that Jeffery Xiong who had the white pieces had a substantial edge over Parimarjan Negi.

But experience in chess is not to be underestimated. Parimarjan might have not played much chess in the last few years, but he has surely seen a lot more than Jeffery has in his career. Negi realized that all that he had to do was keep the position simple. Xiong is tactically very strong and it made sense to play dry and simple positions against him. This is exactly what he did and the Indian was able to outplay his American opponent without too many difficulties. 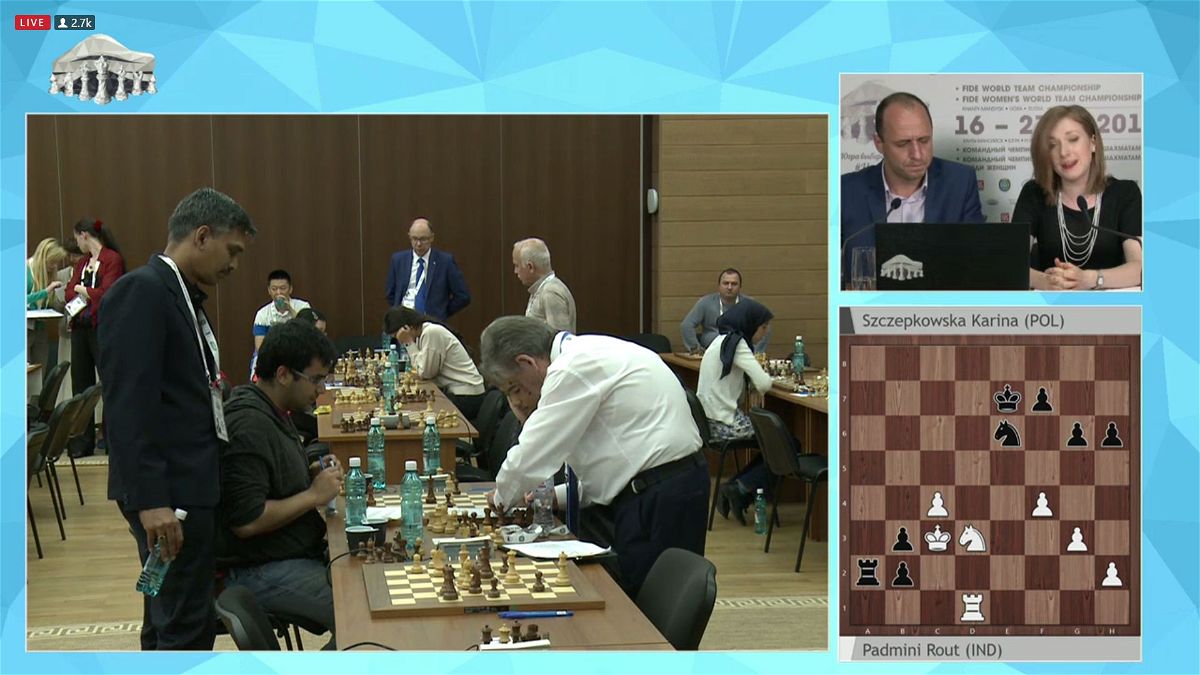 Ramesh comes in to congratulate his boy! Negi had done his job!

The question on everyone's mind is whether Negi would come out of his retirement! Well, we hope so. As of now we are happy that we will be seeing him in action for another five games.

For board wise break down, click here. India now faces Egypt in round five.

China and Russia now lead with 7.0/8. India has moved up to fifth position. Surprise pack are still the Turkish guys who haven't lost a match until now!

Sethuraman, one of India's top players, sends his wishes to the team! Such a positive environment in Indian chess. 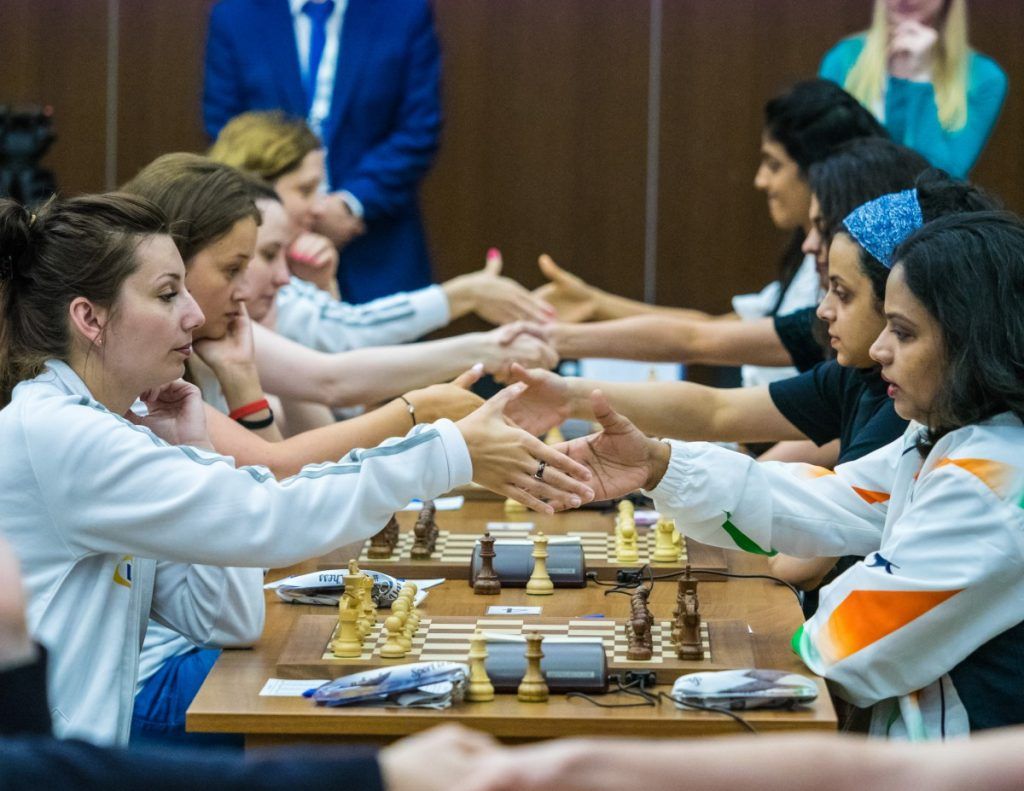 Together we are strong! Team India before the start of the match against Poland.
Harika was her usual solid self on the top board. She held Monika Socko to a draw. However things weren't looking too good for the team on boards two and four. Tania was caught in opponent's opening preparation and as is not so unusual for Viji, she was in an inferior position. 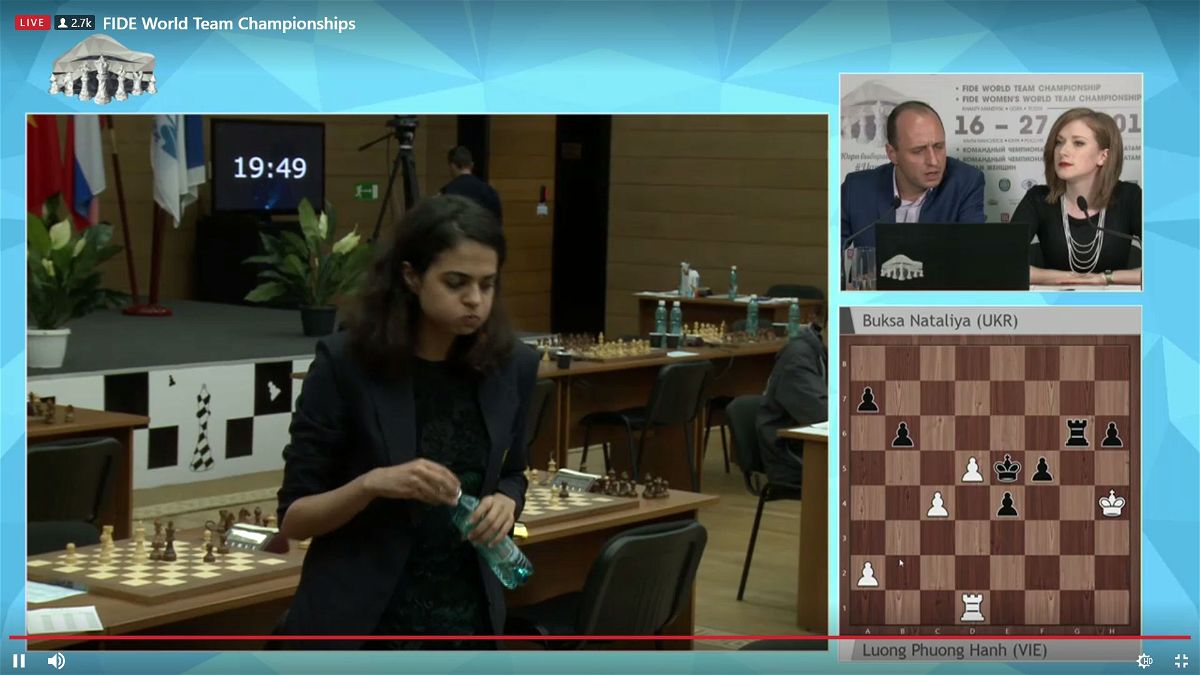 That was close! Tania drinks some water after that long defensive effort! 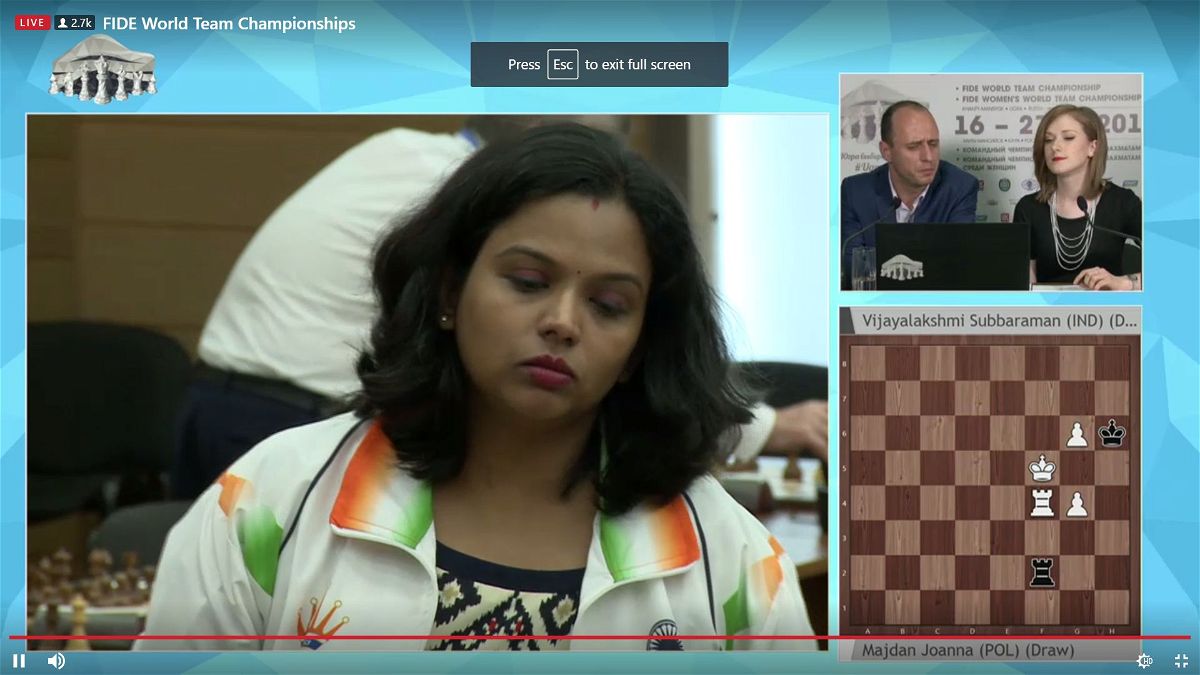 Viji too managed to hold a draw in the rook endgame. And she doesn't look very tired! That's the thing about Viji. No matter how lost the position is, she defends it with all her might with little or no desperation! 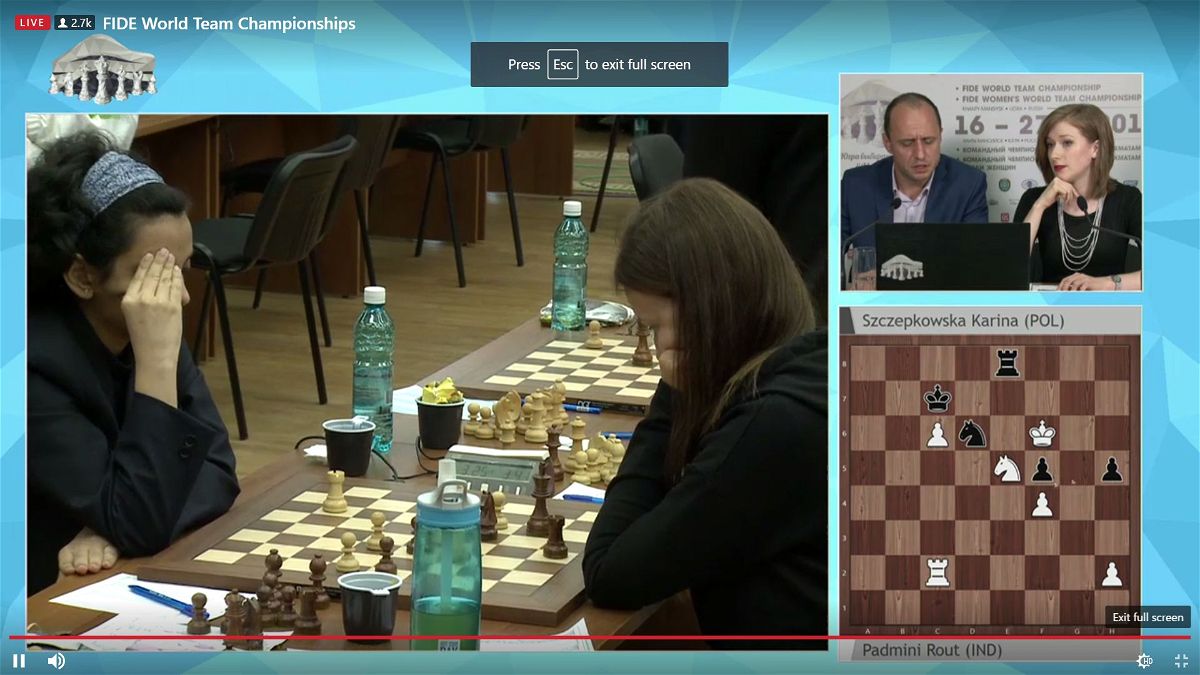 It all hinged now on Padmini's game against Karina Szczepkowska
The difference between strong players and champions is very subtle. When the situation demands the champion can raise the bar of his/her play much more than normal players. Now, when we reach the endgame between Padmini and Karina, the position was equal. Padmini could have accepted a draw and no one would have blamed her for her decision. After all there was nothing much and her opponent was also rated higher than her. But Padmini has nerves of steel. She played on. Kept moving her pieces to and fro just to confuse her opponent. Within a few moves, things started to look bright for the Indian team. Padmini had managed to win a pawn. But would she be able to convert it into a full point? 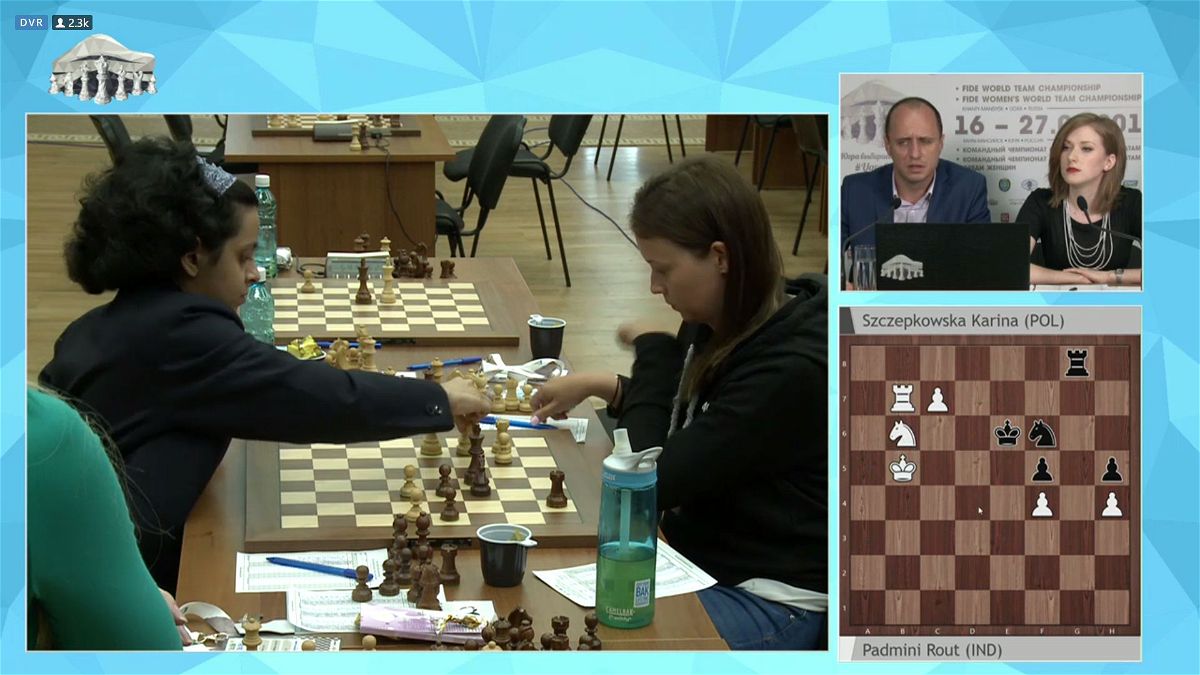 Making the final moves of the game
When the position was winning, Padmini's resolve was even stronger. She played carefully and without giving her opponent any opportunity, she managed to win the game! 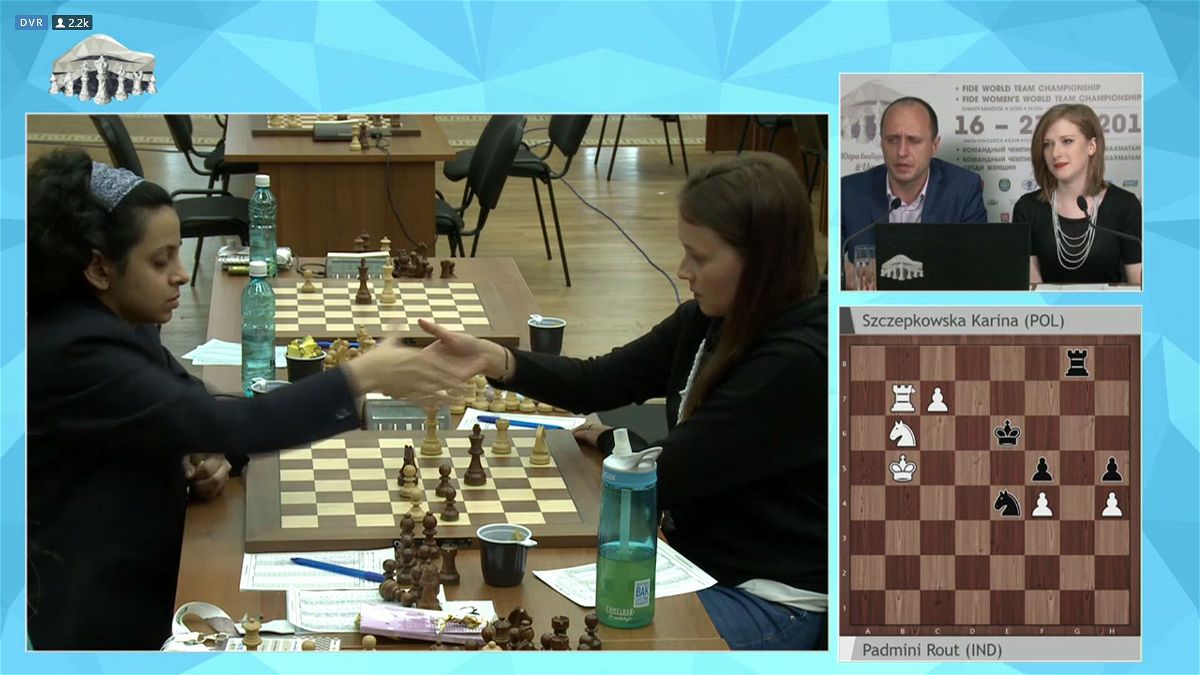 Moving up to third position on the rankings is Team India!