The Queen's Gambit Episode 4 is titled 'Middle game'. Well if you are on this site, it is highly likely that you are quite well versed with this term. This episode shows how Beth deals with a lot of things she is yet to discover, starting with learning Russian language, relaxing a day before the tournament to dealing with young boy as well as old men playing mind games with her assuming the worst of her. We also see Troitsky's study, Fischer, Capablanca, Stein and a couple of Kasparov's game including one against Anand replayed in this episode. Were you able to spot them all? Check out the review of Episode 4 and find out. Photo: Netflix stream

Siegbert Tarrasch said, 'Before the endgame, the Gods have placed the middle game'. The quote and meaning is famous among the chess universe. No matter how much you prepare the opening and endgame, middle game is completely dependent on your understanding, strategy, feel and demand of the position. In every game you are bound to come across unknown positions where you have to make critical decisions yourself. The path to glory is certainly not an easy one.

The first mention of chess in this episode was when Beth's guardian wanted to know what she was reading in flight, Beth replied, 'Pawn structure analysis'. After a couple of scenes, we see Mrs.Wheatley saying, 'Chess is not all there is', to which Beth instantly says, 'It's what I know'. A lot of players who only like to stay in the chess universe and not explore the unknown before the tournament would be able fathom themselves in Beth's shoes. Beth also mentioned earlier, 'The tournament starts tomorrow. I need to work on these endgames'. There was the following position in front of her. 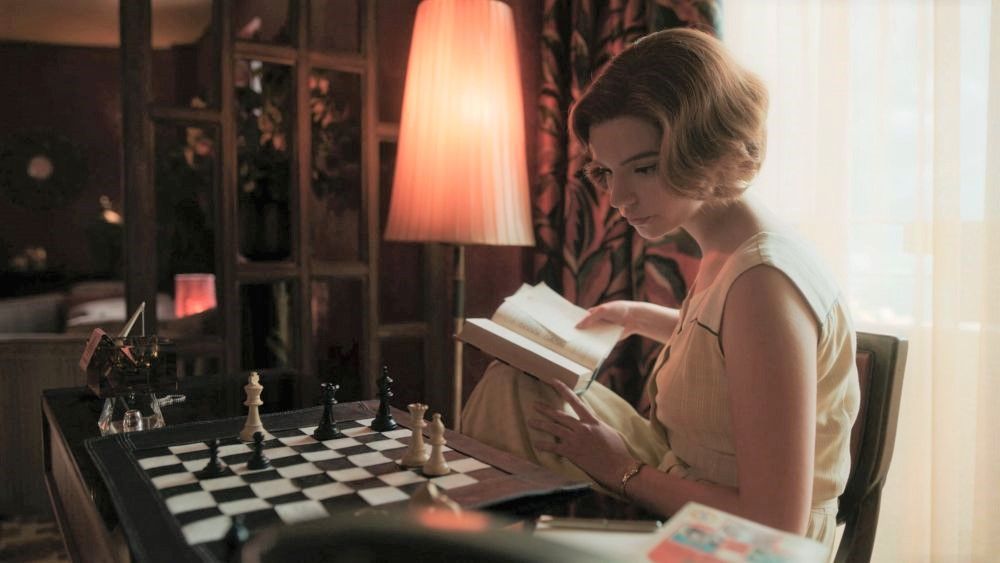 Does this position look familiar to you? | Photo: Netflix stream

The moment I saw this position, it looked vaguely familiar to me. I remember seeing Beth having some endgame book. So it could probably be from Collection of Chess Studies by Alexey Troitsky which was originally published in 1937. 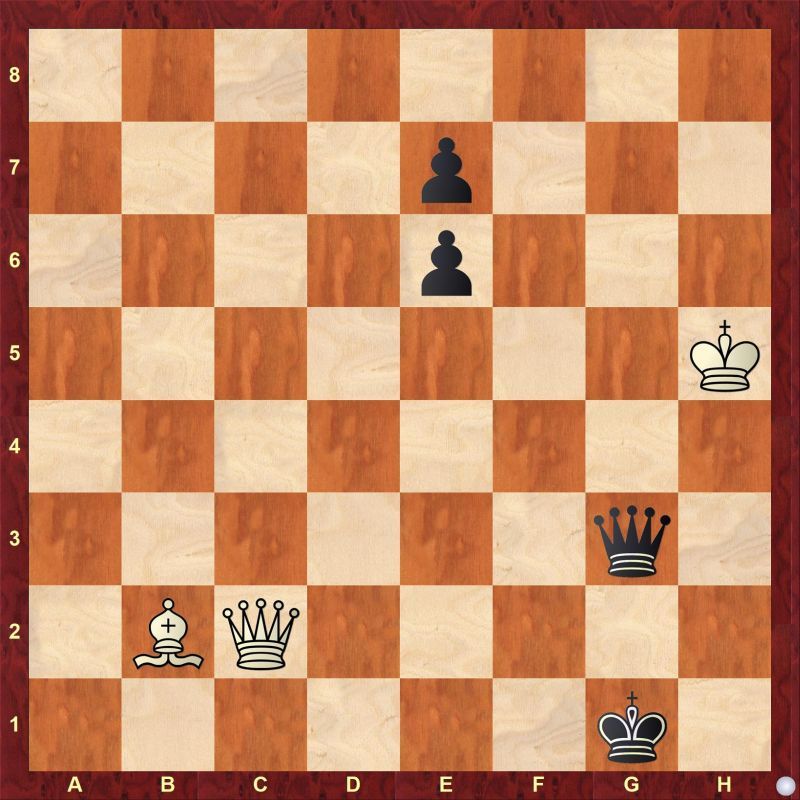 Try to see if you can solve like Beth Harmon. We also see Beth covering the answers with a paper so that she doesn't accidentally see the answers before solving. Well how many of us have done that and still do?

After a few scenes, we see Beth arriving at a zoo where she spots Borgov relaxing with his family along with his bodyguards. Well some players like to study whole night before the tournament and some just like to relax. What do you prefer? 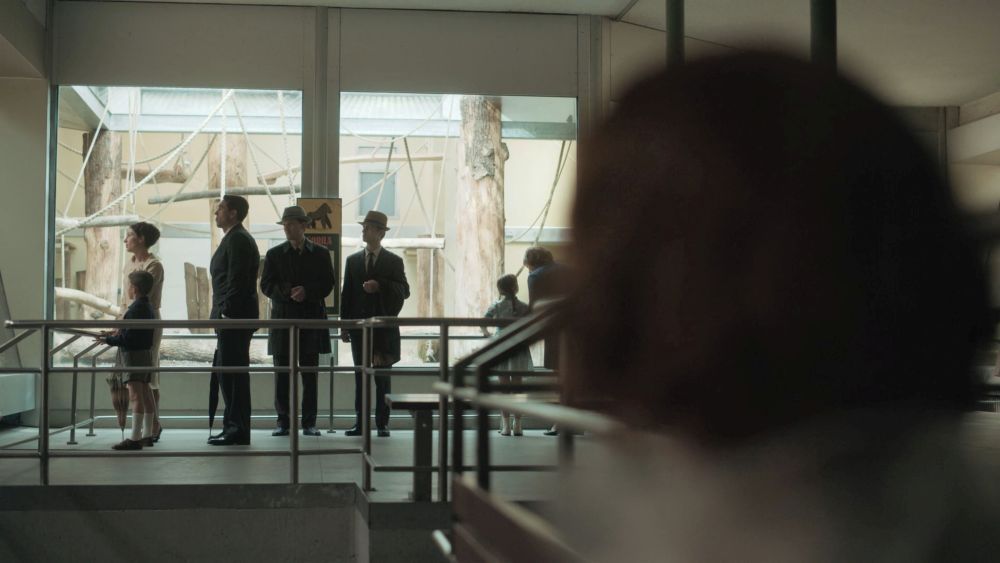 Borgov seen to be relaxing with his family before the tournament | Photo: Netflix stream

The next time we see a chess position, we hear Beth's voiceover explaining her games to her mother and the following position is shown on camera when Beth says she had her opponent O Marenco's king in a mating net in 31 moves. 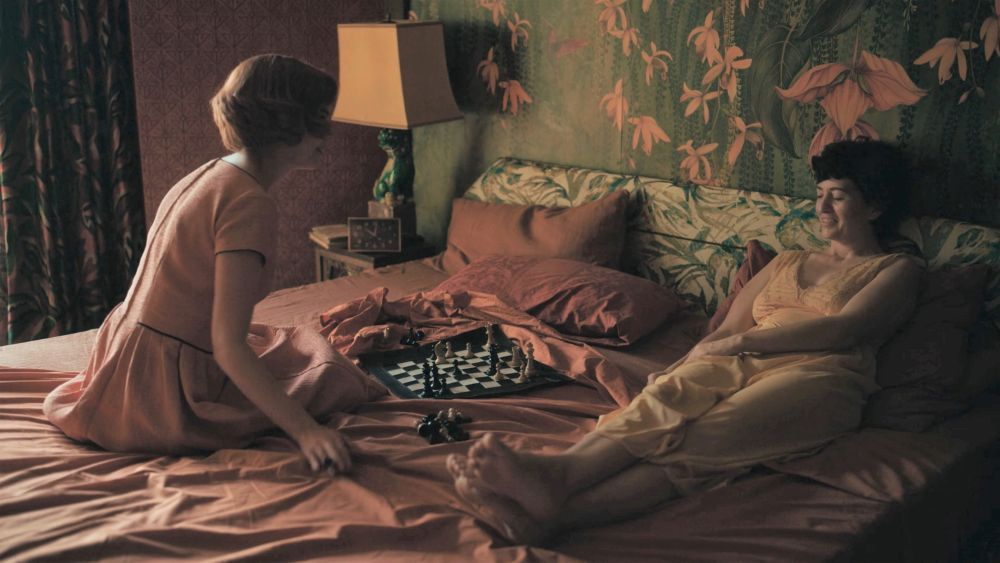 The pangs of explaining chess position to our loved ones who do not play chess is universal | Photo: Netflix stream

If you are curious, here is the diagram: 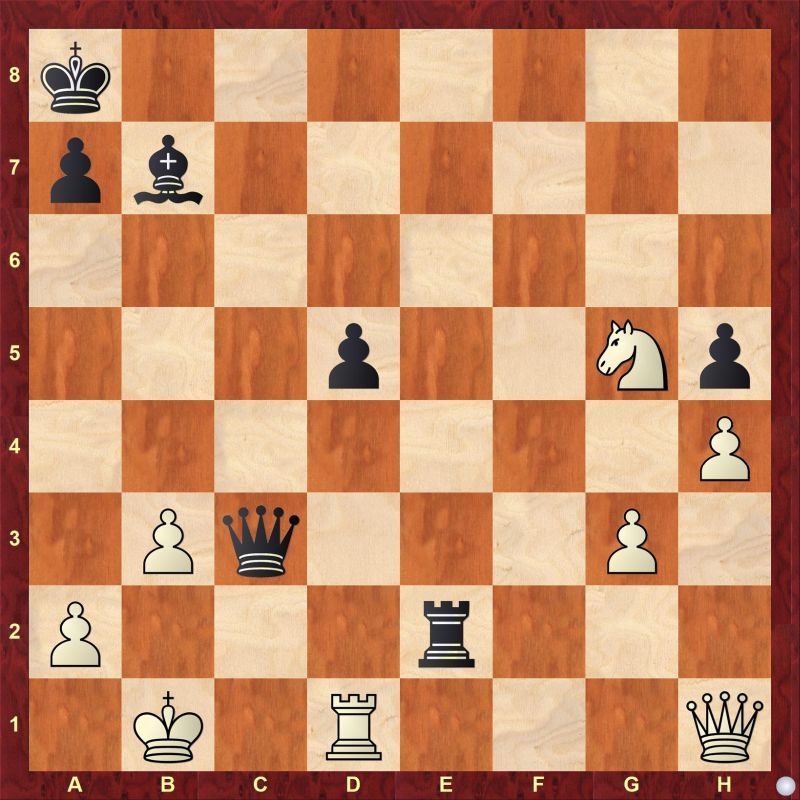 It is evident that black is winning here

The next game we see of Beth against an unknown opponent is the exact same position between Fischer and Larsen from Interzonal 1958. 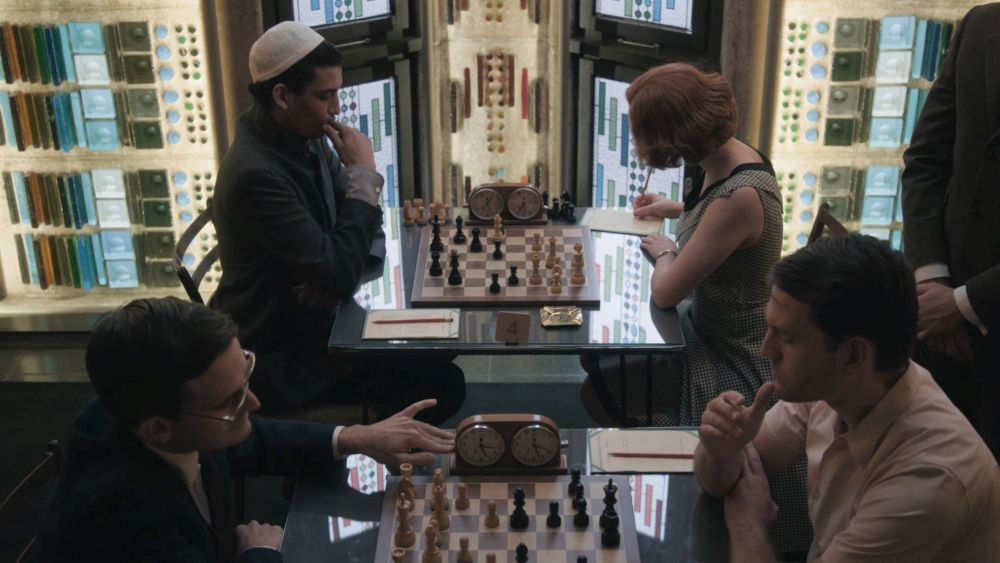 What do you think was the last move played by Beth? | Photo: Netflix stream 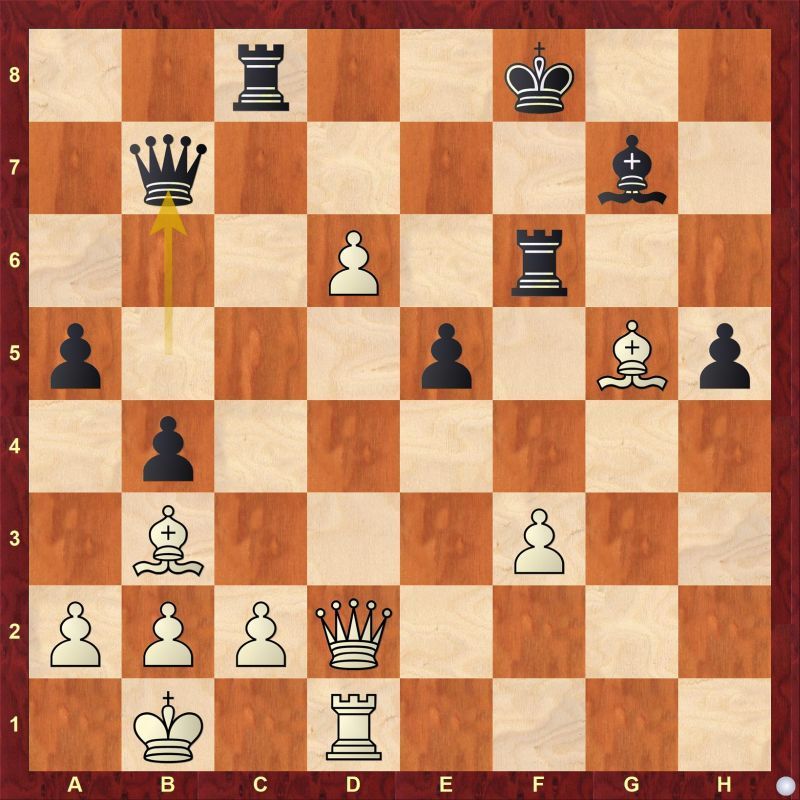 Beth played 29.d7 which is a deviation from Fischer's move of 29.Bxf6. Of course both are winning for white.

After a change of frame, we see another zoomed in position where Beth plays Qf7+ and the next move is a checkmate. After a careful search, I found that the position before the move Qf7 is a game between Kasparov and Dutch legend Loek Van Wely played in Wijk aan Zee in 2000. If you nitpick then you will have a hard time believing Beth playing a game which was played 34 years later by Kasparov, but we are not going to do that, we know she is not the Doctor (Who yet?) Beth played Qf7+ and checkmate is inevitable on the next move | Photo: Netflix stream

The actual position was this before Beth played 26.Qf7+ 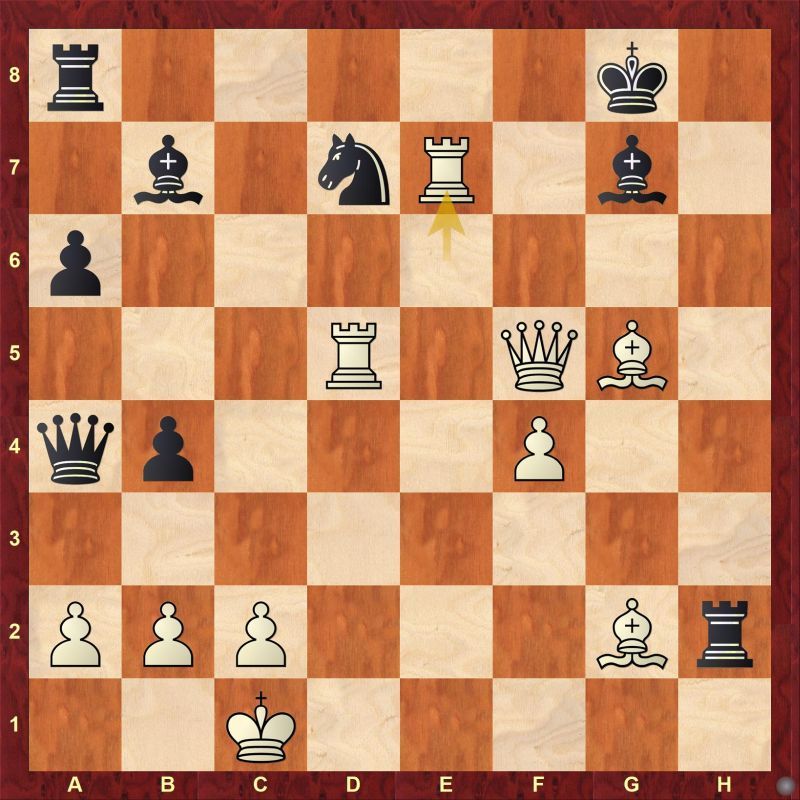 The actual position after 25.Re7

The game in reality got over after 25.Re7, however for dramatization purpose an extra move of 26.Qf7+ was added, because finishing move by the Queen adds to the effect. Get it?

Once again we see Beth swimming in deep waters which is of course the metaphor for the situation she is in at the tournament. She is playing an invitational tournament which is supposed to be strong. 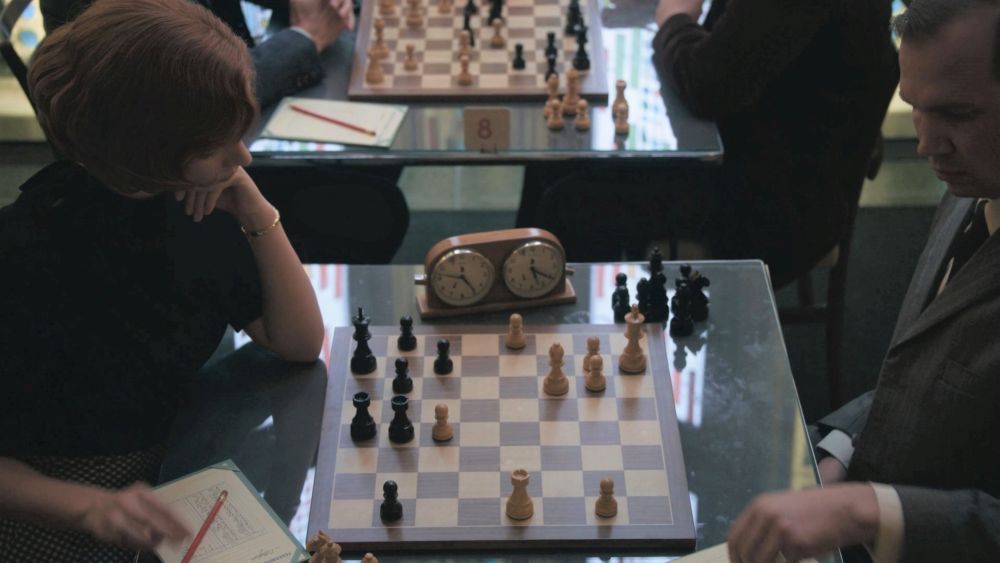 The above position is from the game between Anand and Kasparov from Frankfurt Rapid 1999 which Kasparov won. 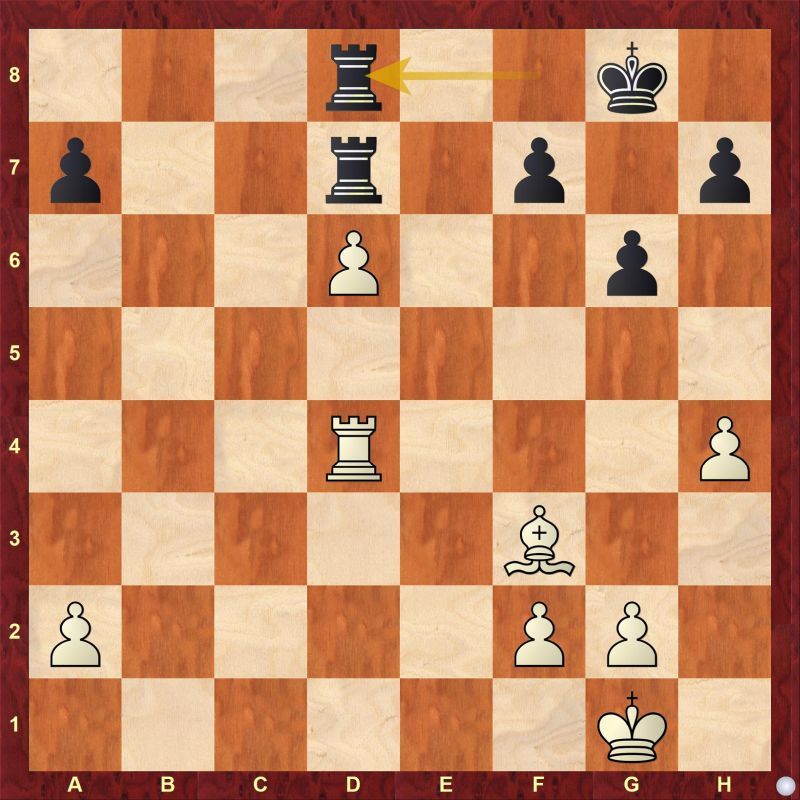 We only see Beth's mystery opponent playing 26.Ra4 followed by Beth following the game with 26...Rb8 which was the final move of the actual game before the scene changes.

The next game we see is where Beth's opponent seems to be pleading for mercy. 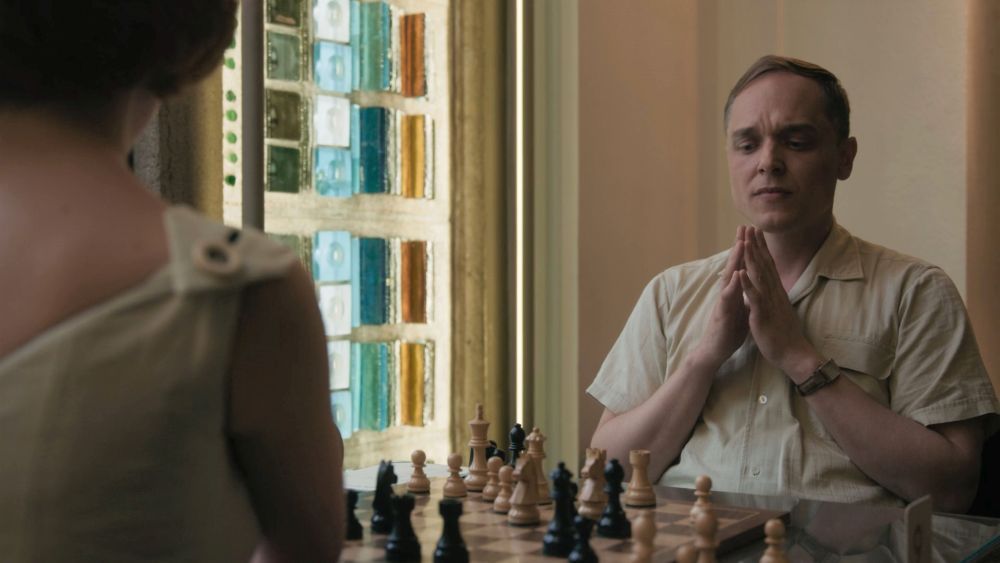 Did you ever face an opponent who almost seemed to be on the verge of crying? | Photo: Netflix stream

This game was also found to be a game which was played in reality. The above position is from a game between O Bernstein and Capablanca from Moscow 1914. 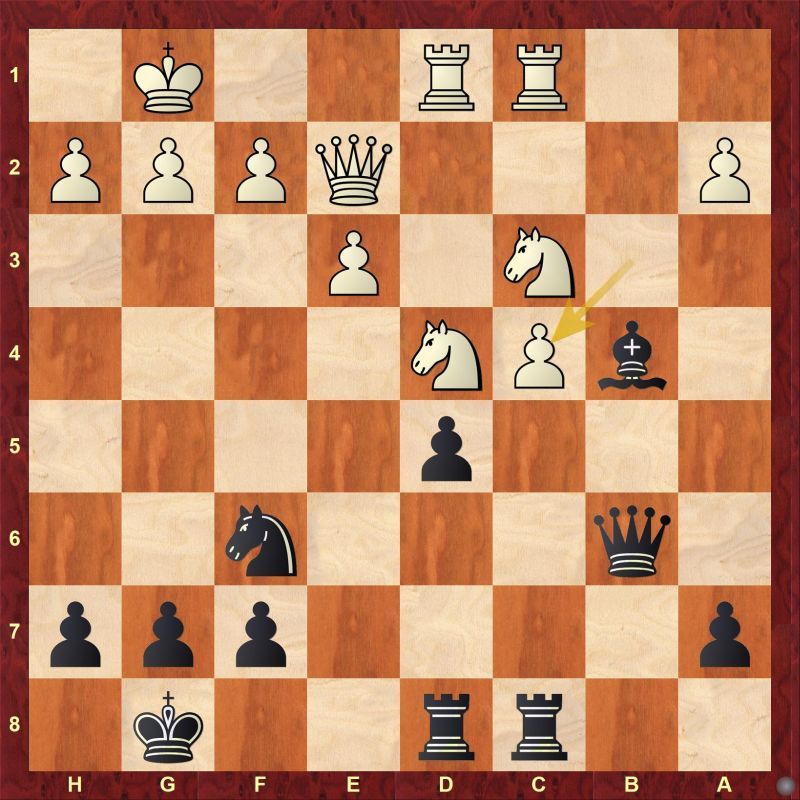 We see Beth playing 19...dxc4 before his opponent gets up from the board and leaves.

On another day, Beth walks towards to see Borgov live in action in person for the very first time. 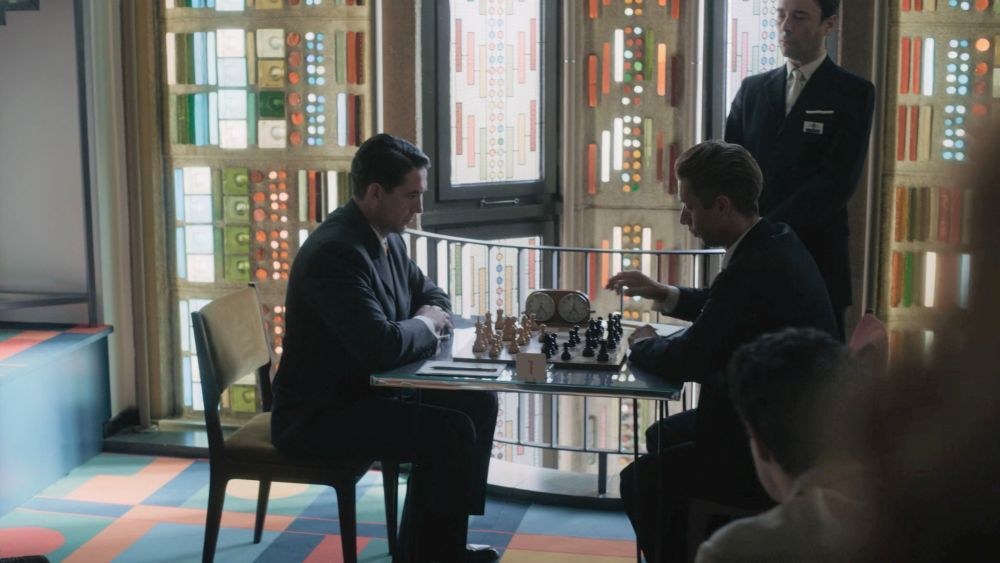 Did you notice the uncanny resemblance of Borgov's opponent S Bilek to a former world champion? Here is the position which was shown in the scene: 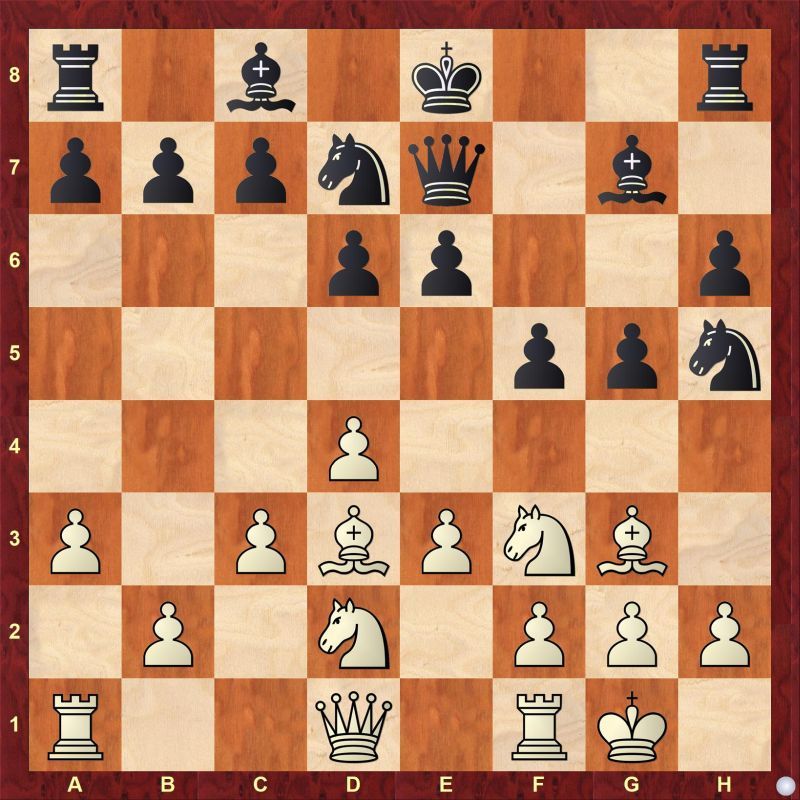 Borgov continued with Ne1 and then the commentator explained the idea behind Ne1 in Spanish. We see Bilek playing Ndf6 and then scene jumps by a few move where Borgov recaptures with hxg3 which is a result of I guess Nxg3.

Beth's next opponent is 13-year-old Georgi Girev. Both players blitz out their opening moves. 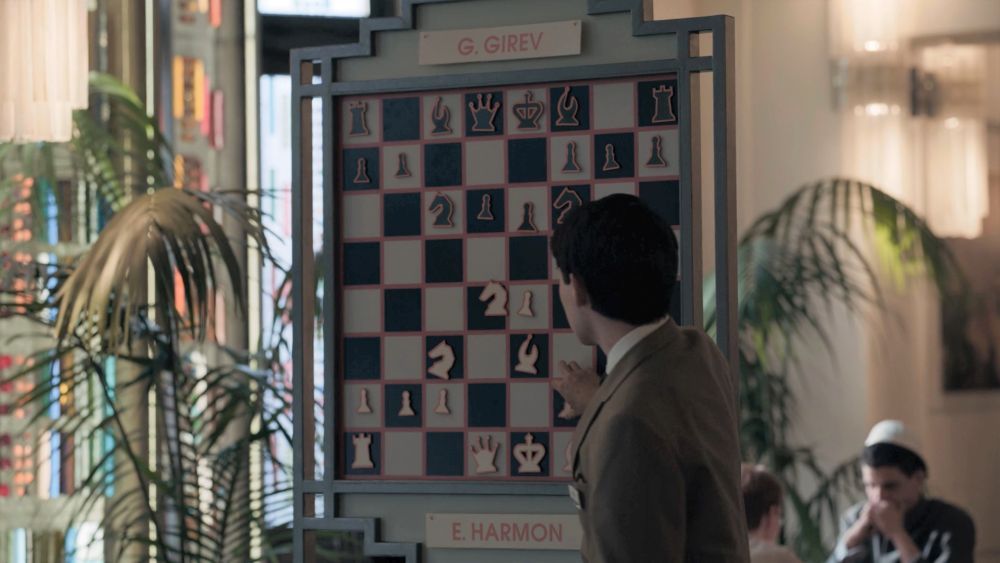 Demo board guy plays 7.f4 as per the game | Photo: Netflix stream

After five hours of play, Girev calls the arbiter for adjournment who hands over an envelope to Beth to seal her move. 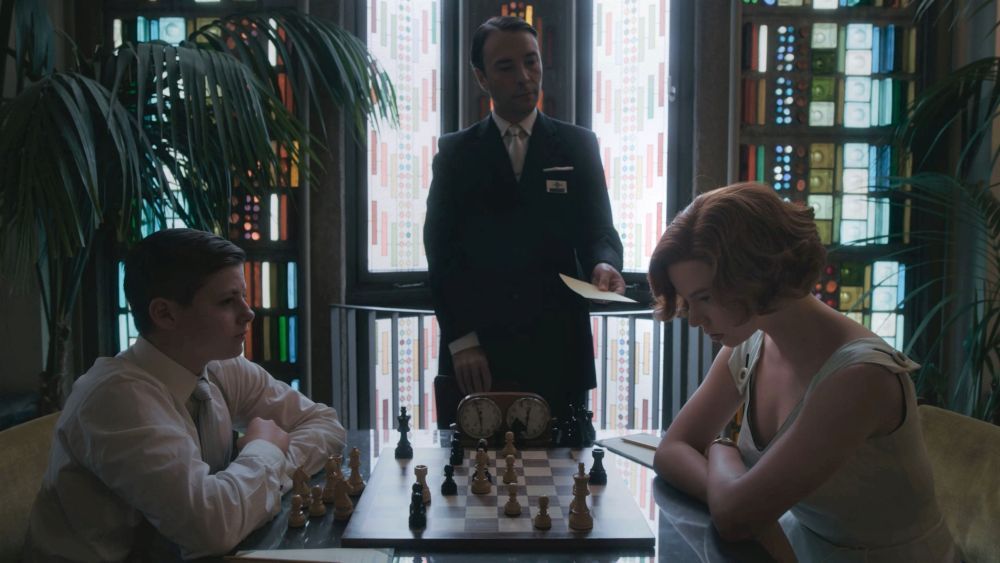 Adjournment was possible before tech was as developed as it is today | Photo: Netflix stream

Here is the position before adjournment: 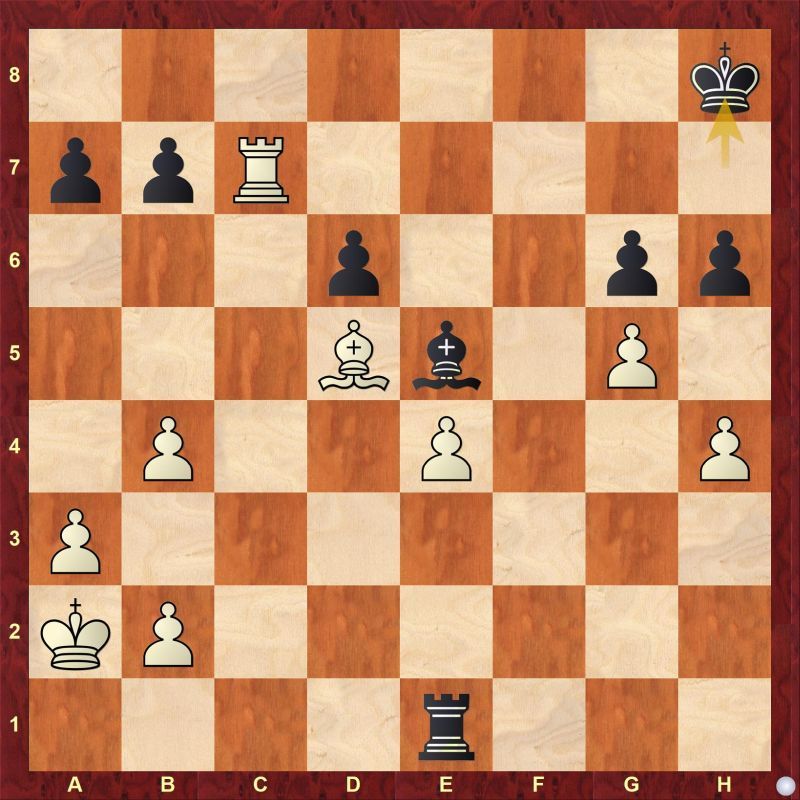 On the following day, the arbiter opened the sealed envelope and made the move which Beth sealed on the previous day. 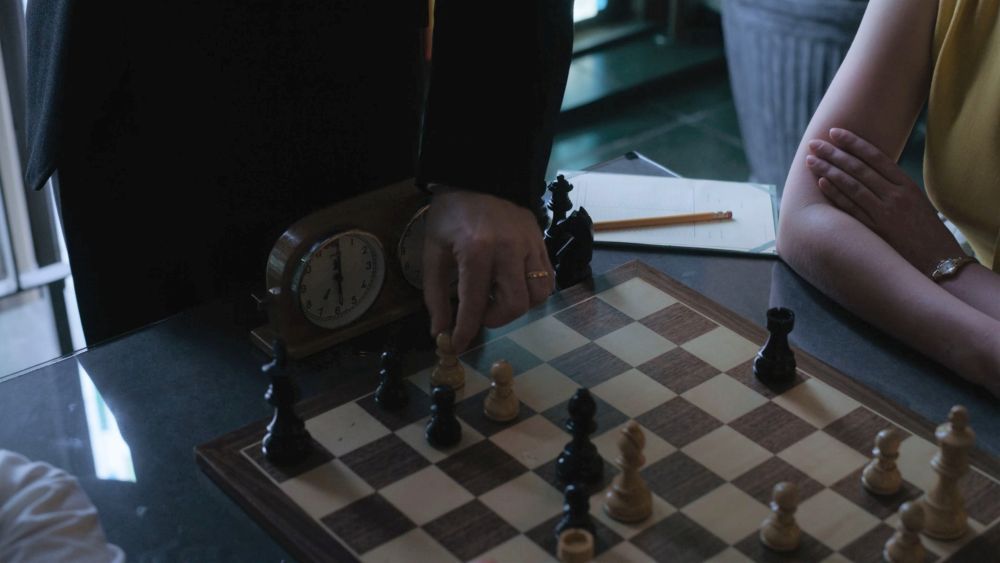 It is shown that Beth goes away from her board after making her move, only to come back when her opponent plays his move, quickly reply and repeat the same process quite a few times. One of the reason is to get psychological advantage as it distracts his younger opponent, it is implied through the tapping of her heel too. To find out the second reason, you have to watch the episode and pay attention to the conversation after the adjournment on the previous day. The final position was actually lost for Girev so resignation was justified. 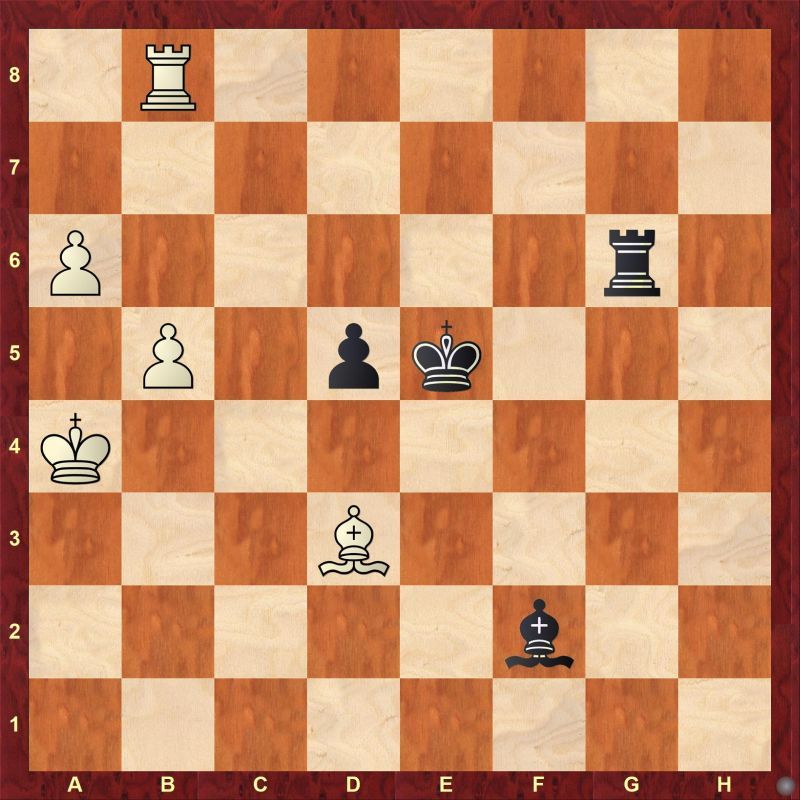 After a couple of scenes, we see Beth seeing her name next to Borgov's name at the top board, take the charm off her face. It's like suddenly darkness surrounded her. We have all been there, facing the strongest player of a tournament at the top board becomes the inevitability when we are not the strongest of the tournament. But somehow most of us, like the inevitability to be delayed especially when we know that the odds are against us. 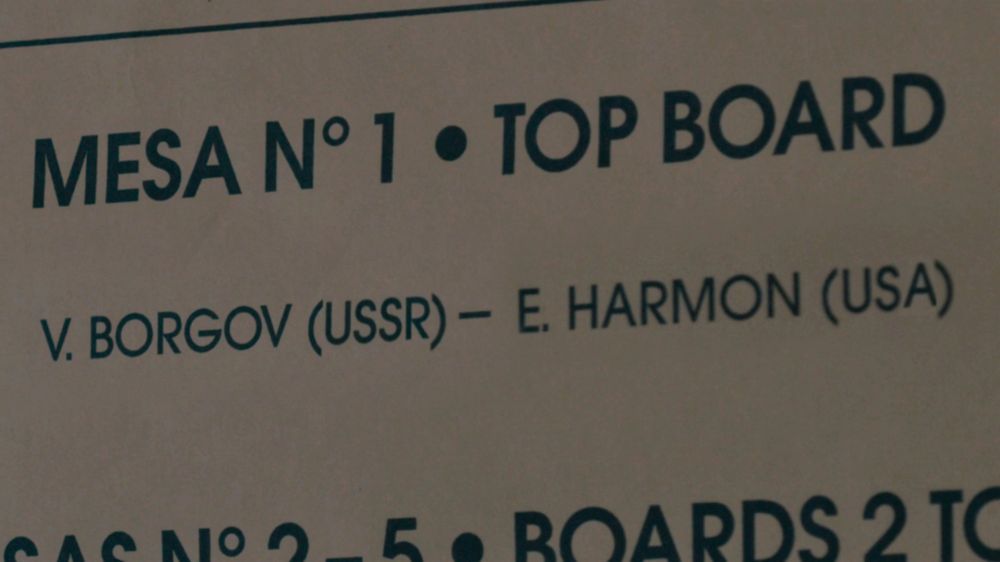 Beth facing Borgov at the top board | Photo: Netflix stream

We see Beth playing against Borgov for the first time in her career. The opening went like 1.e4 c5 2.Nf3 Nc6 3.Bb5 Qb6 4.a4 and then the scene jumped to the final part of the endgame: 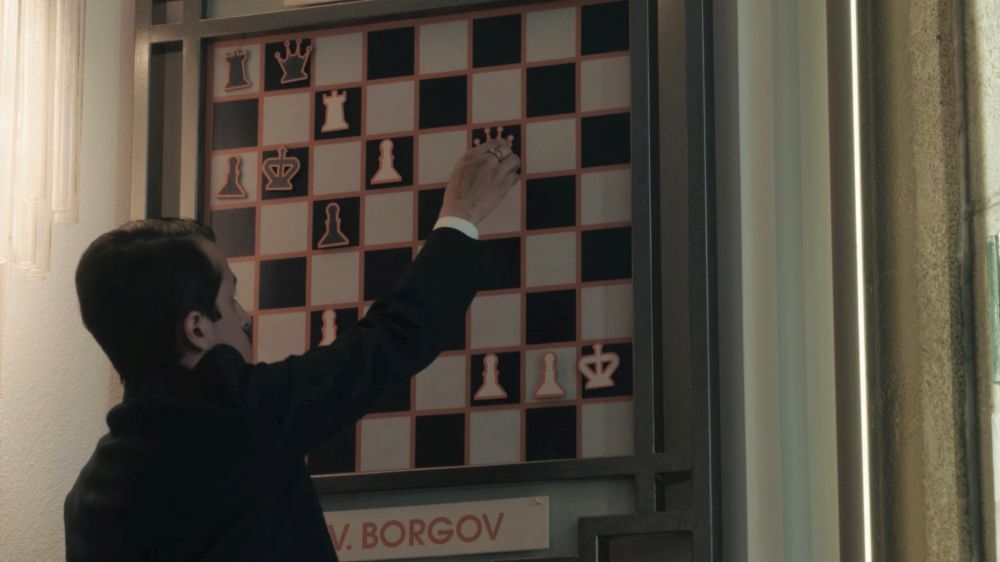 In case you are wondering if this game is also a replay of a previously played game then you are right as Beth's first encounter against Borgov is a replay of the game between Leonid Stein and Aleksandar Matanovic from Yerevan International in 1965. 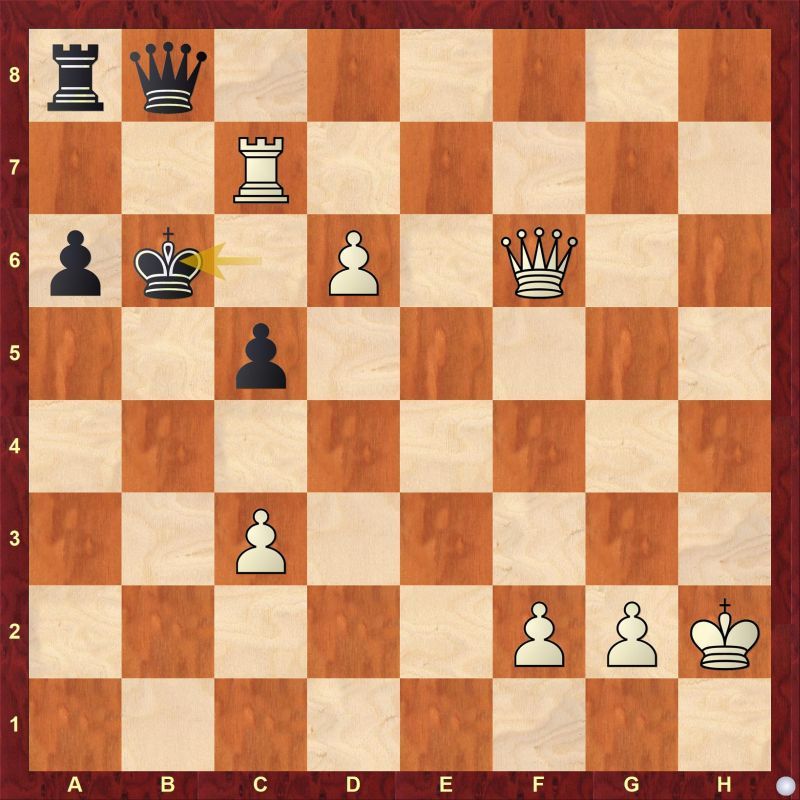 Stein won the game with 40.Qf3, in the episode Borgov played the same before Beth resigned by knocking her king down angrily remembering the teachings of Mr. Shaibel.

The episode concludes with a major setback which Beth has to deal with.

Episode 4 - 'Middle game' once again lives up to the name. It is about the evolution of Beth Harmon. How she deals with the unforeseen situations, how she adapts to adversity and there is much more to life than just chess. Chess players know that no matter how much you prepare, the middle game is where you have to deal with the unfamiliar situations yourself. You can apply what you have learnt but the decisions you have to make them yourself on the board.

Watch the entire episode of The Queen's Gambit Episode 4 - Middle game on Netflix. The series is meant for adults only. So kids, if they want to watch the episodes for chess purpose, they can take an adult's help in watching only the chess elements of the mini-series.