The Queen's Gambit Episode 3 is titled 'Doubled pawns'. If you see an episode named by a specific term, chances are it will be difficult to get it right. Turns out that they did get it correctly. This episode is about Beth expanding her horizons - from being a state champion to winning tournaments all over the country and finally playing the National championship. Of course this is not a typical underdog sports movie where the protagonist battles against all odds and triumphs in the end. Nope that's not a spoiler, you have to see the episode to understand how minute things were explained in detail quite beautifully. Check out the detailed spoiler-free review of Episode 3 covering the chess aspect in great detail. Photo: Netflix stream

Doubled pawn is a chess term which means when two pawns are in the same file, generally next to each other. It is considered to be a disadvantage in general, however there are various situations where either in the opening or in the middle game, a player deliberately creates a double pawn on his/her own for advantage. This episode shows that sometimes you can make the best out of the worst situations. All is not lost just because the situation is momentarily not in your favor.

We see Beth arriving at Cincinnati to play a tournament. She hears a mystery guy saying, 'The Caro-Kann Defense, genuine bummer. It's all pawns and no hope'. 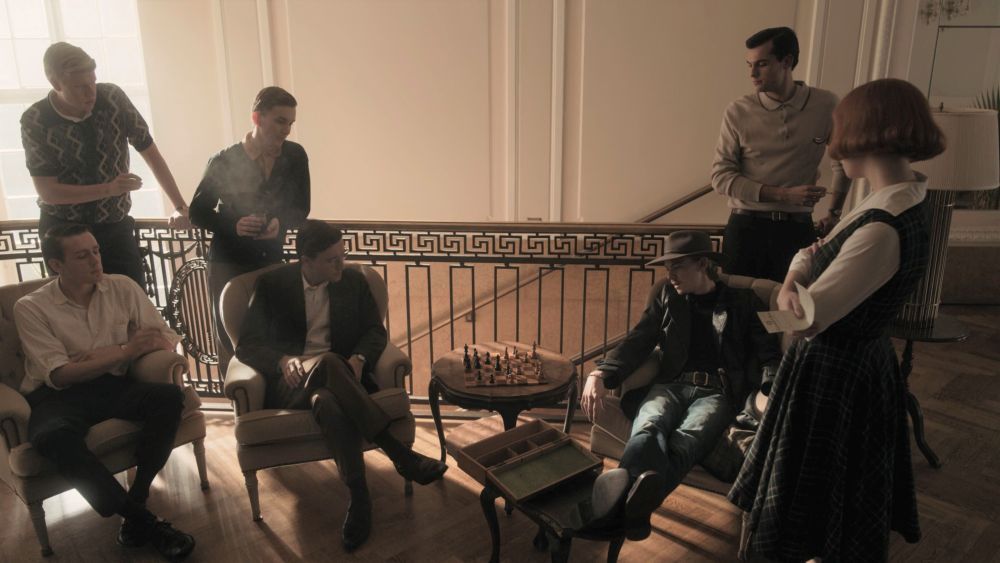 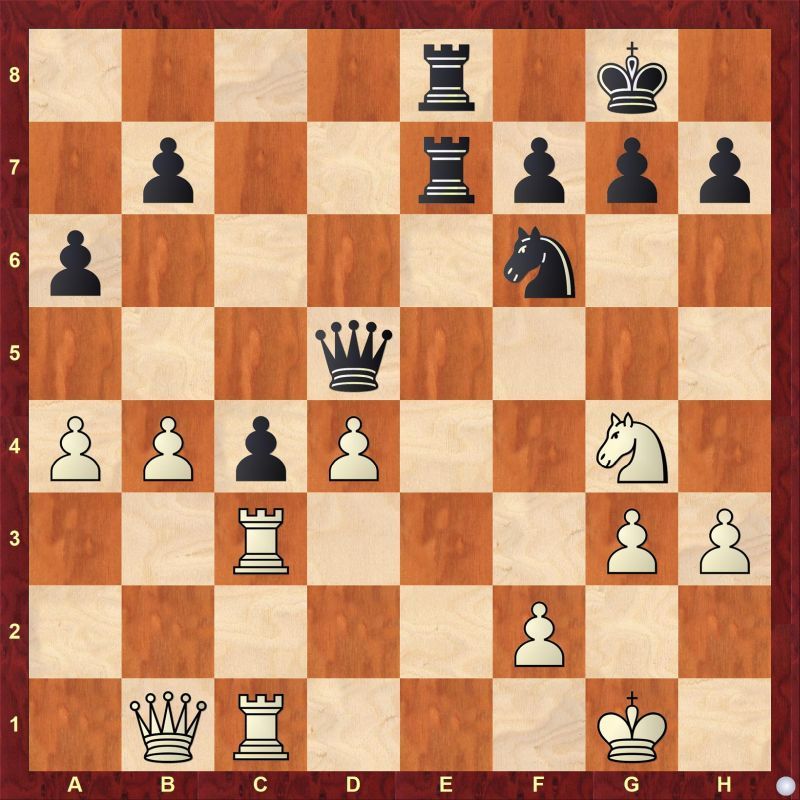 The diagram shown in the above screenshot

Beth says, 'I'd take the knight. If you take his knight then you double his pawns.' However in the next frame we see a position which can theoretically arise from the previous position but in a practical sense, it is highly unlikely. 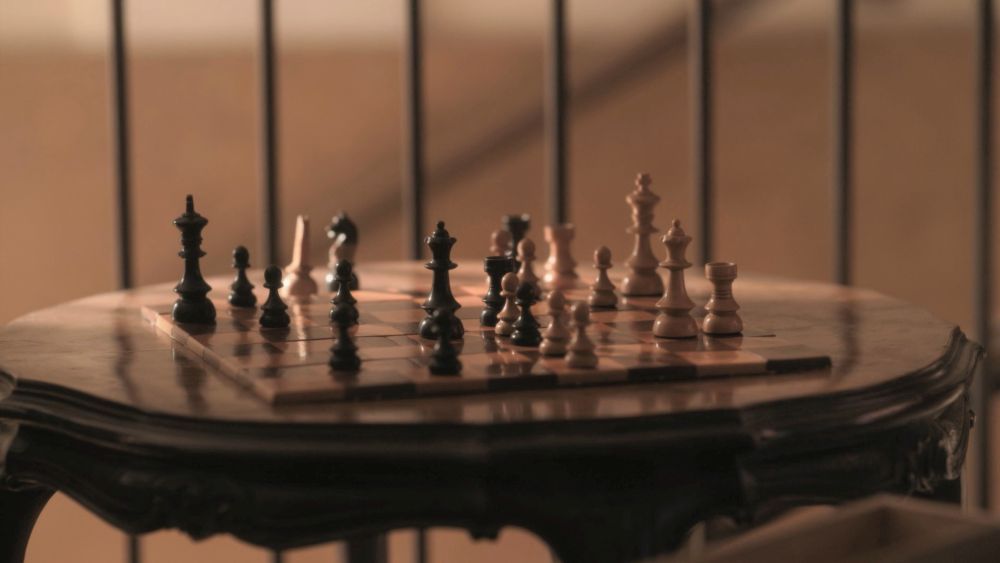 What would you play here as white? | Photo: Netflix stream

Here is the diagram of the above position: 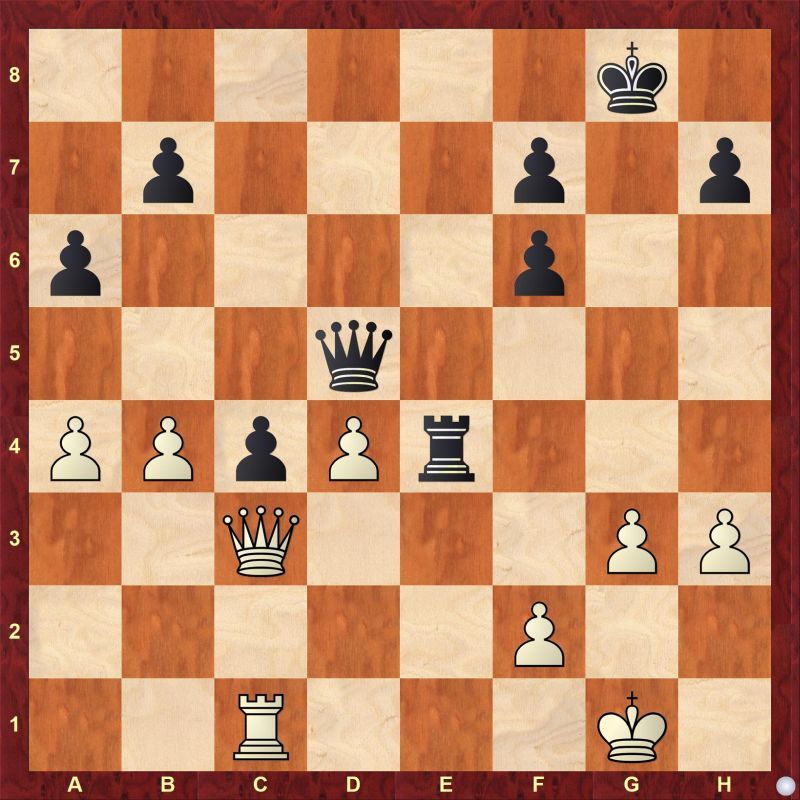 Both Beth and an unknown man says, 'Queen takes pawn' which is a blunder. Find out why.

One of the character, the above mentioned diagram is from the game between Mieses and Reshevesky played in 1935. However the actual position in the game has a slightly different pawn structure than shown in the scene. Well maybe this was done deliberately to make the viewers check out the actual game. 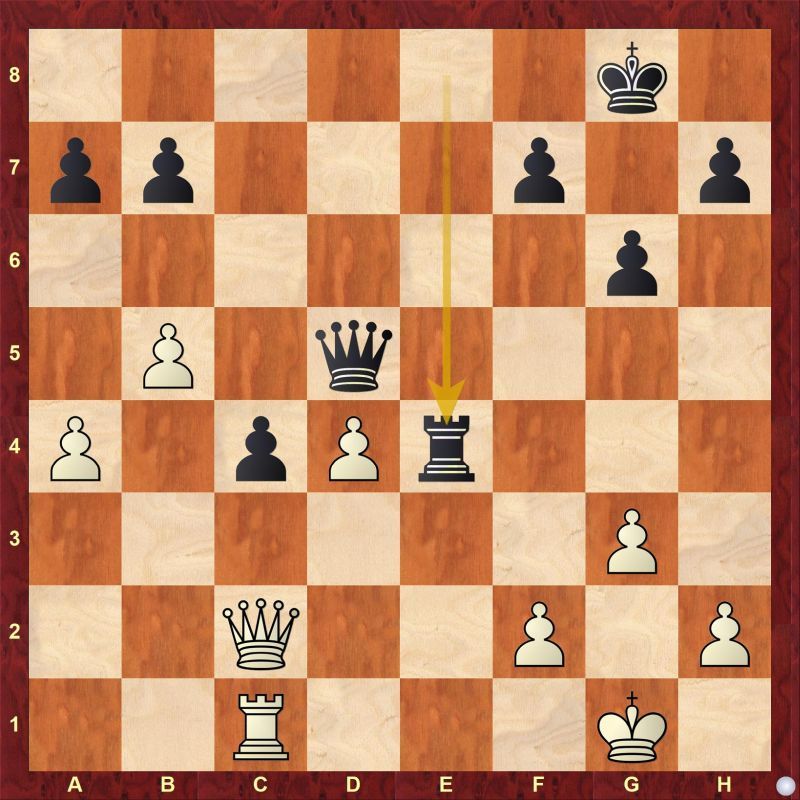 The actual position after 30...Re4

The mysterious person correctly mentions that Reshevsky was playing like that or younger than Beth Harmon's age at that time.

Reshevsky playing a simul at the age of eight | Photo: New York Times

When Beth asks him if he was playing the tournament, he replied, 'Playing too many opens... it can only hurt me, you know what I mean?' It is widely believed that a lot of strong players avoid playing too many open events which will cause them to lose a lot of rating points. In open events, you do not know whom you will face so you have to prepare for the unknown - unlike closed/round-robin events where you already whom you are facing, when and with which color. 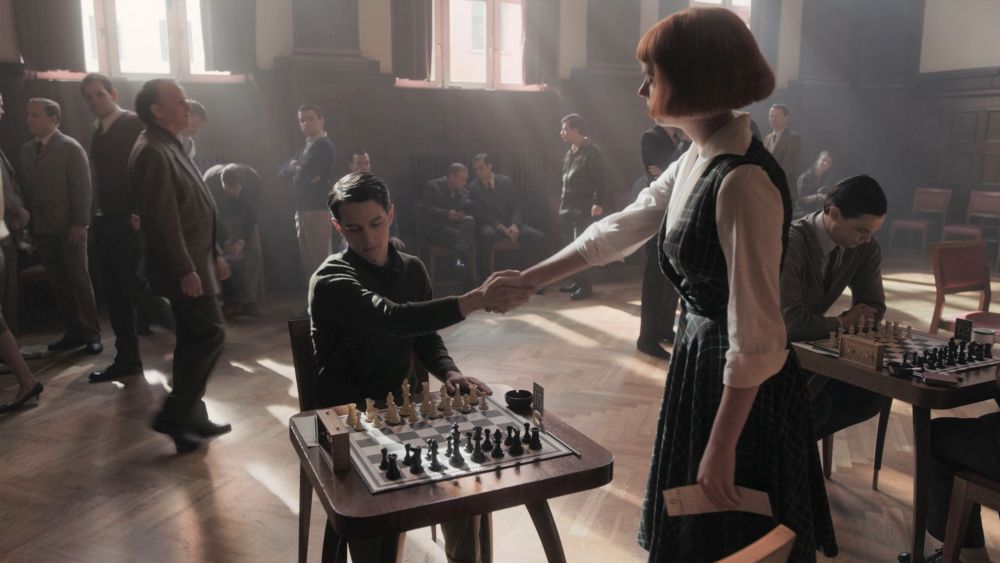 Beth's opponent feeling dejected to face the Kentucky State Champion at the early stages of the event | Photo: Netflix stream

Have you ever faced a strong opponent at an early stage of the tournament? Yeah we all have felt what Beth's opponent felt. It is a common feeling felt when a player faces a much stronger opponent and feels dejected knowing that there is slim to no chance of beating that particular opponent, especially if that opponent is the reigning state champion. Beth having trouble to concentrate on her analysis | Photo: Netflix stream

Chess is not a spectator-friendly game as it requires silence during the play as well as preparation. While Beth tries to find mistakes in her game by analyzing them, her guardian watches a show on the television which she finds obviously distracting. Well some of us have been there and felt that at some point. 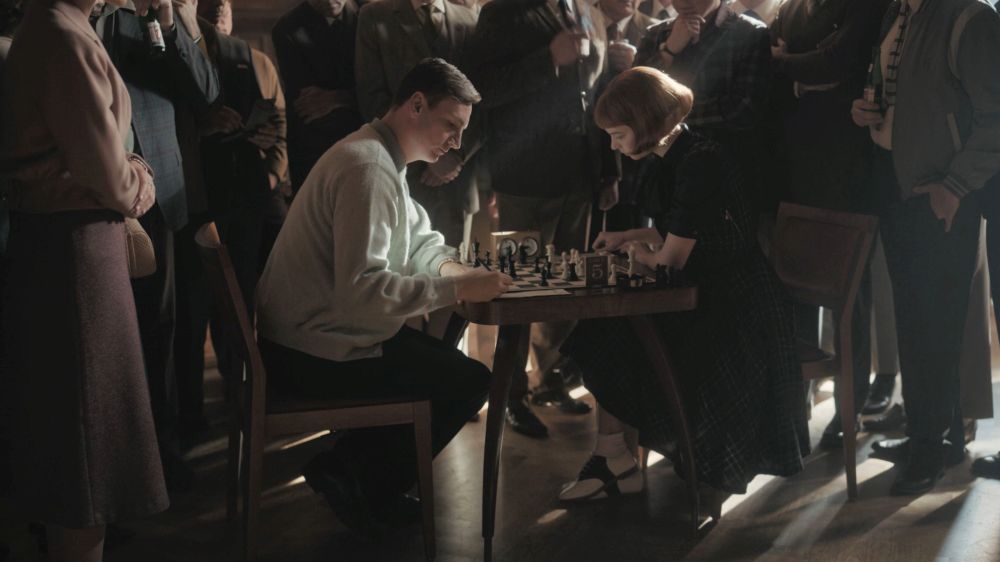 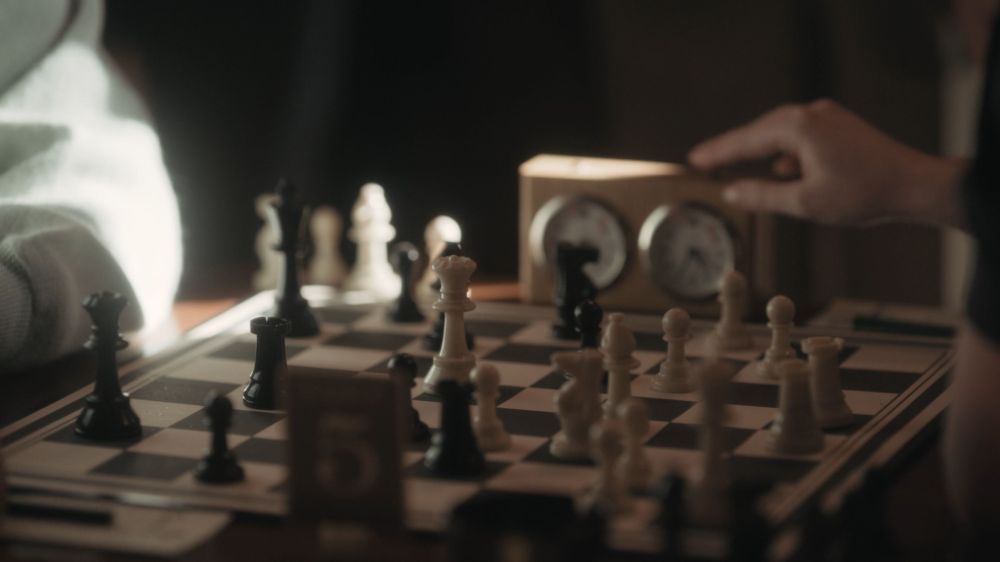 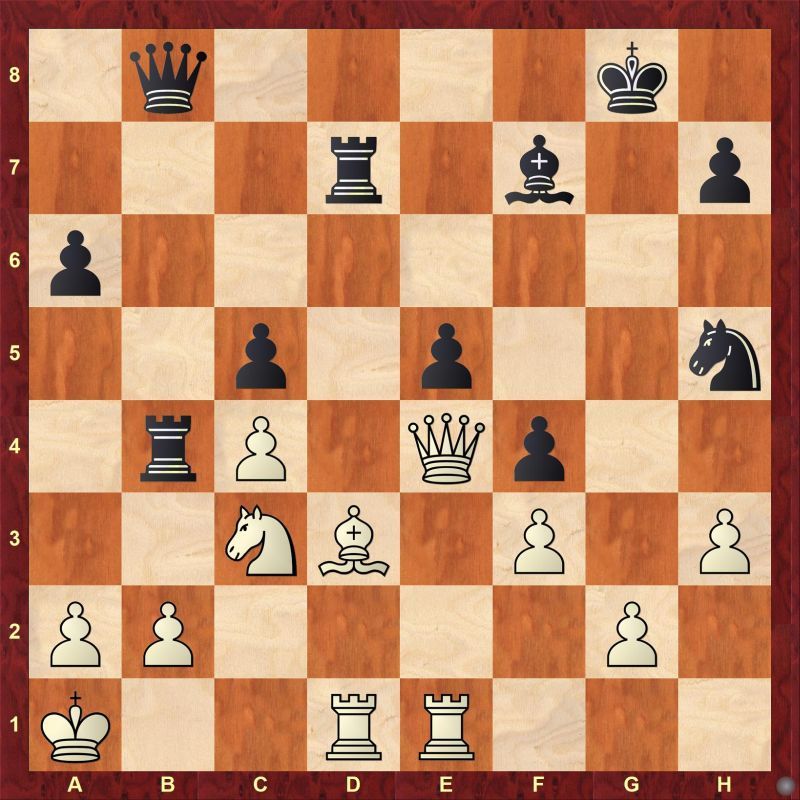 After the game Beth sees her guardian standing at the end of the crowd. It is always gratifying for a player to see a family member or a loved one spectating their game especially after they have won their battle. 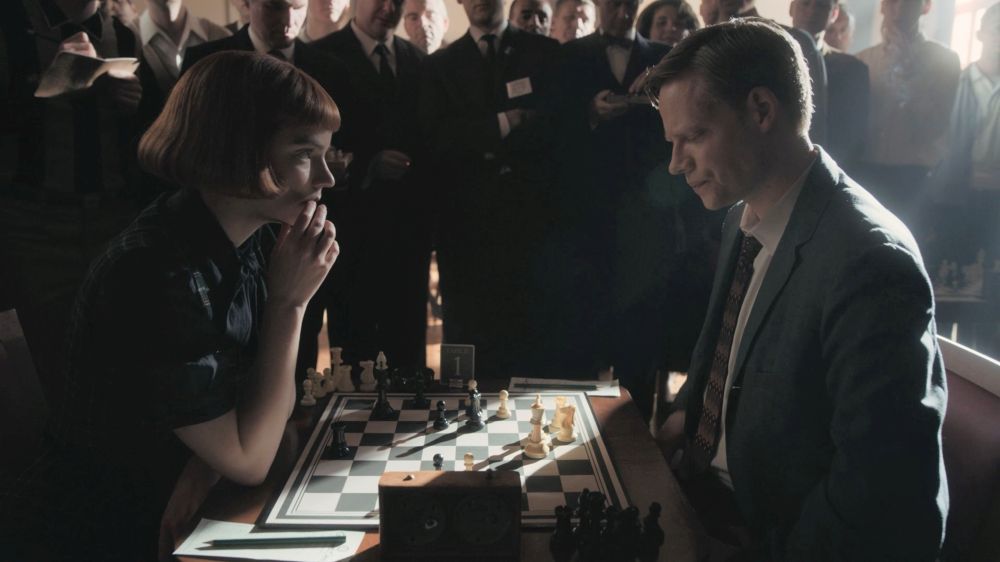 Beth facing Rudolph at the top board | Photo: Netflix stream

One half of the twin brothers Matt and Mike, explains the position to Beth's guardian, actually this is done for the audience and we see delivering the checkmate in the next two moves. 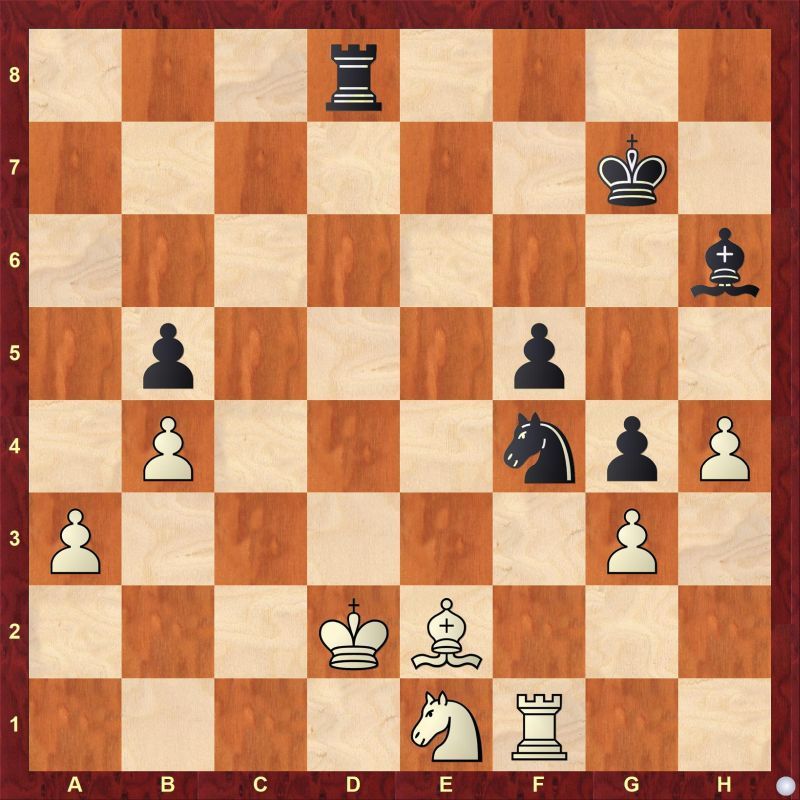 It is evident that black is winning here and white cannot save the game.

We see Beth travelling all over the country continuously at various events. In one of the flight journey, we see Beth replaying a game on her pocket chess board. Before technology took over and chess boards made its way on smartphones and tablet devices, many strong players used to carry a pocket chess board. Some still do even today. 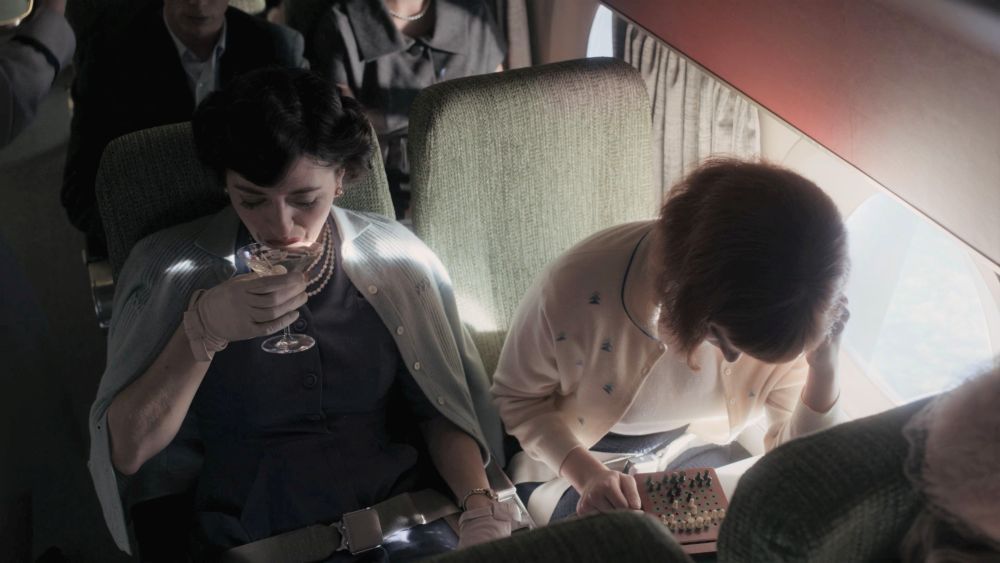 Do you have a pocket chess board? | Photo: Netflix stream

We find Beth reading a Chess Life magazine where she finds about the fictional Vassily Borgov who has won USSR Championship again. According to the glimpse of the magazine article we get to know that the USSR Championship had the participation of Mikhail Tal, Boris Spassky, Viktor Korchnoj and Leonid Stein. The article also mentions Mark Taimanov and Ratmir Kholmov as the experts who opined about the tournament. The only strange thing is Tal is spelled Tahl, not sure if it is to avoid any kind of future litigation. 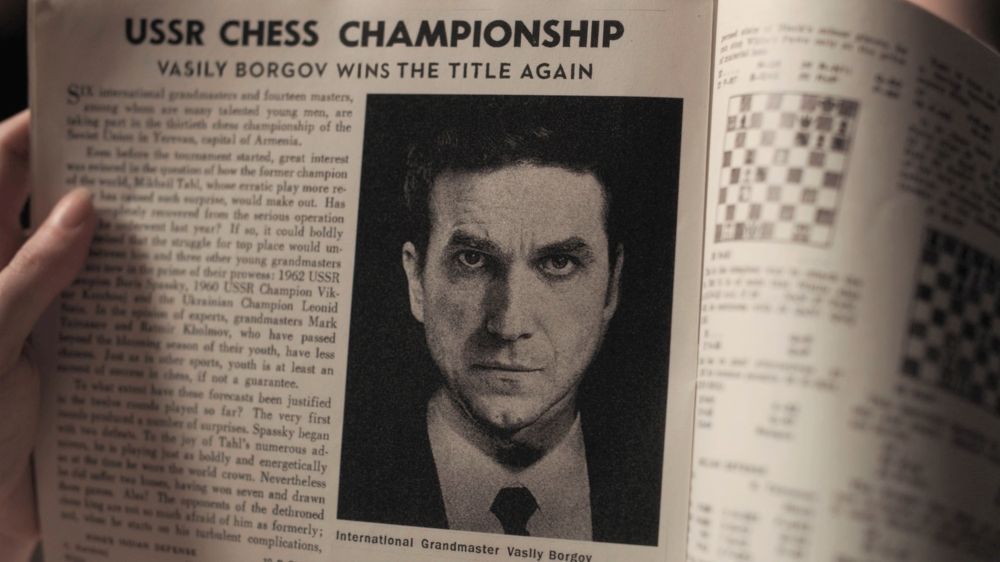 Vasily Borgov - a clear foreshadow that he is the final boss Beth will have to overcome at one point | Photo: Netflix stream

In the next scene, we see Beth being interviewed by a journalist who asks about almost everything but chess. She even brings up 'apophenia'. It is quite obvious that chess players see patterns in almost everything, be it on or off the board. For a non chess player to label it something like a condition is definitely quite unacceptable to a chess professional. Well actually it's the journalist who was drawing various simile to the chess pieces which Beth just simply scoffed off by saying, 'They are just pieces'. On the following day, Beth disappointedly said, 'They didn't print half the things I said' when her guardian read a part of the interview which was published. How many of us have been there? Well I will just leave it at that.

The next scene does a time leap and we see Beth arriving in Las Vegas in 1966 for US Championship. She accepts Townes' invitation to come up to his room and the first thing she notices is the following position. How do you evaluate the position? | Photo: Netflix stream

The position is from the game between Efim Geller and Vassily Smyslov. It was played in a training tournament in Gagra 1953. 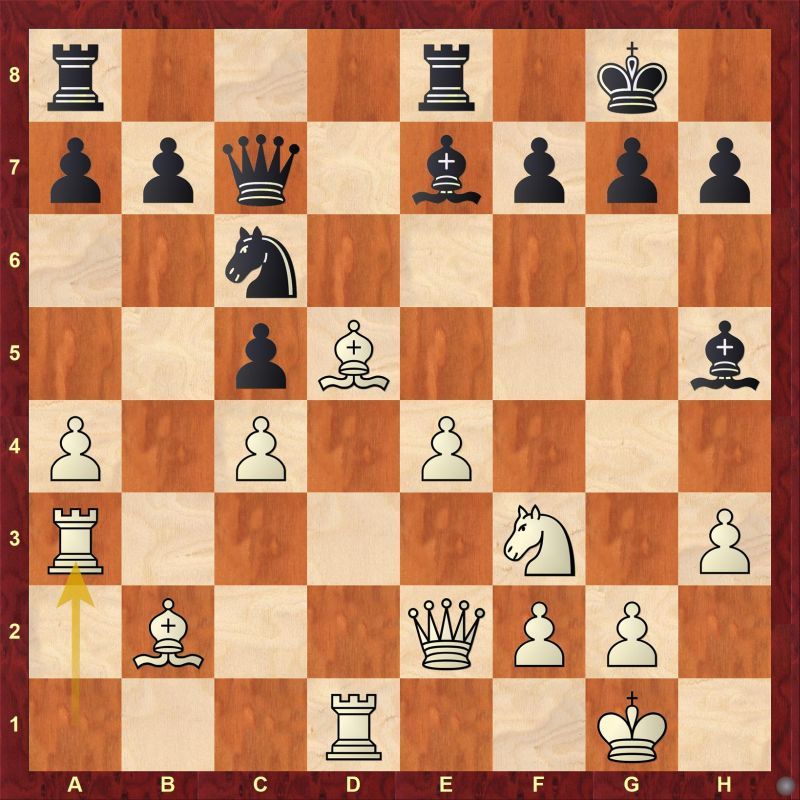 When Townes gives the nod to play during the photography, Beth surprisingly plays the next two moves exactly as happened in the game 18...Rad8 19.g4 Bg6 20.Re3 which means that she has already seen the game as it was played thirteen years ago according to the scene timeline. We don't see the rest of the game but in case you are interested, here you go:

After a few scenes, we see Beth talking about her wins - the first one was against an Oklahoma guy whom she beat in 'two dozen moves'. 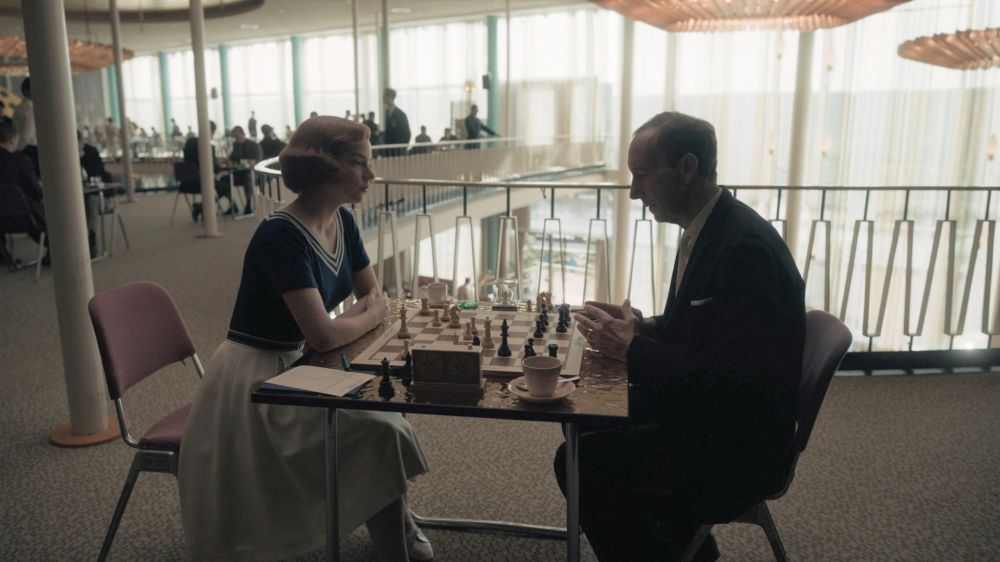 Beth on the brink of victory against the Oklahoma guy | Photo: Netflix stream

Here is the diagram shown in this scene: 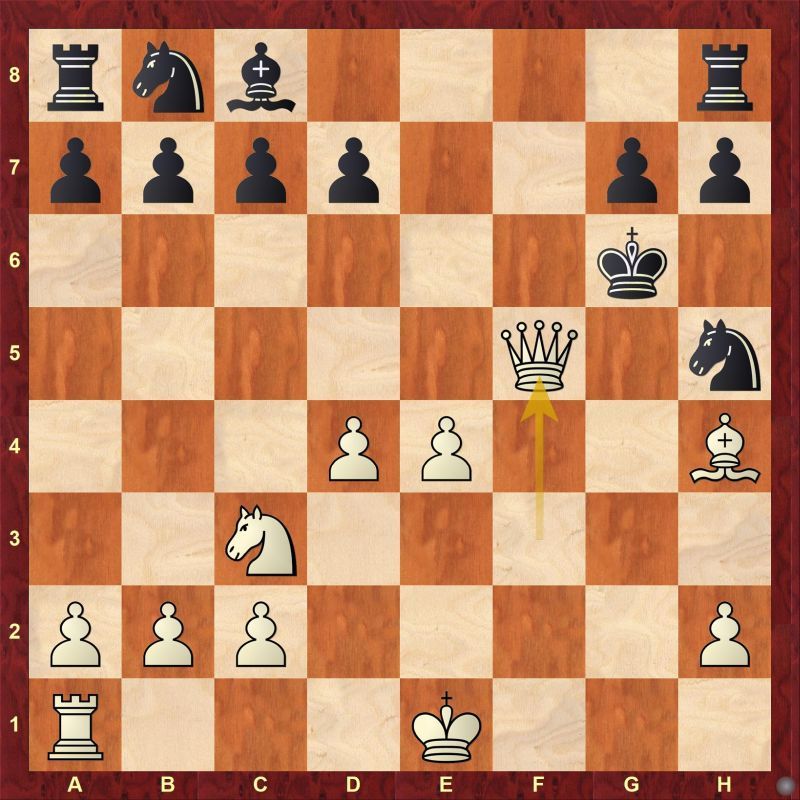 If you are wondering how did I find out about the move number when only one move was shown in this position, well turns out this position is from the game between Greco and NN (No name) from 1620. Here is the entire actual game which is highly likely to have happened in Beth's game. Of course we wouldn't know but we can definitely take a calculated guess.

Beth talks about Benny Watts with her guardian and then in the next scene we see Beth walking up to talk with the US champion. He advices her on her game against Beltik. Beth although denies setting up the position and think it out but she does that exactly once Benny walks away from the frame. 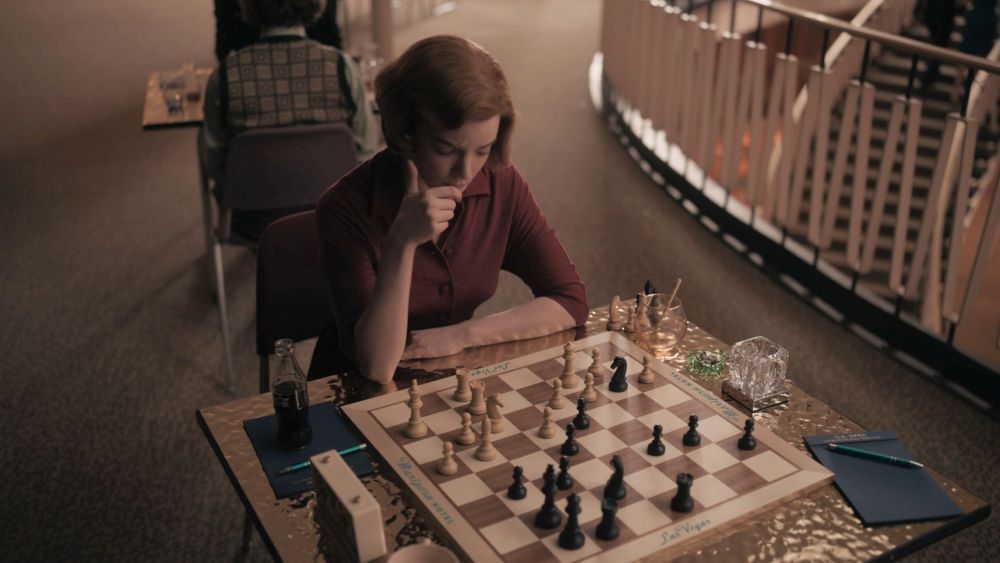 How do you evaluate the position? | Photo: Netflix stream

Well these days if someone talks about a position from a previous game, we generally put it on a computer and think, but in 1966 that was obviously not possible. 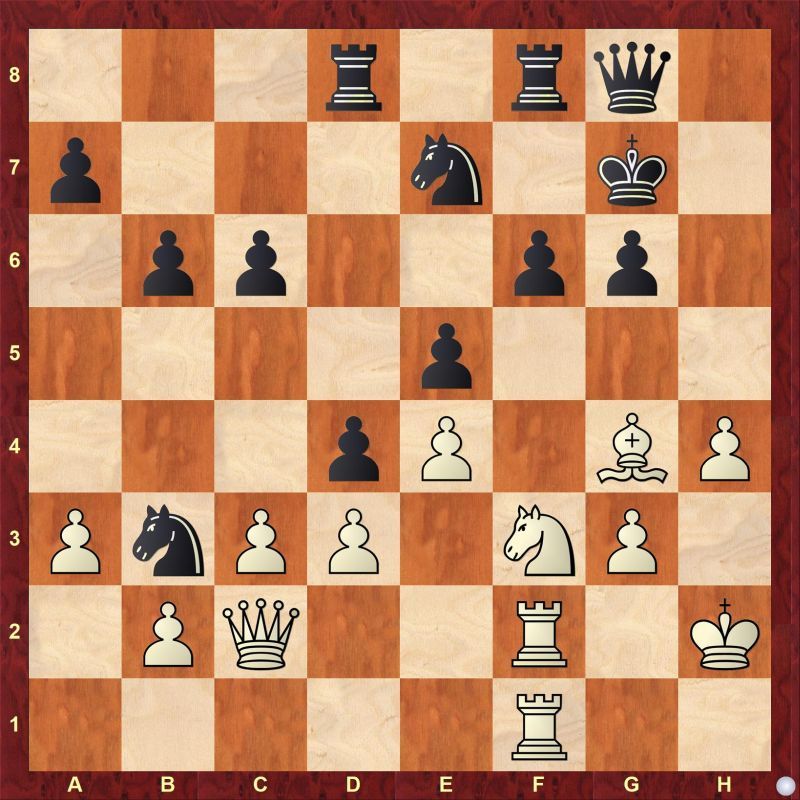 Beth finds the correct move for white c4 in a matter of few minutes. Well it could be that she took longer than few minutes and it was shortened in the interest of time. 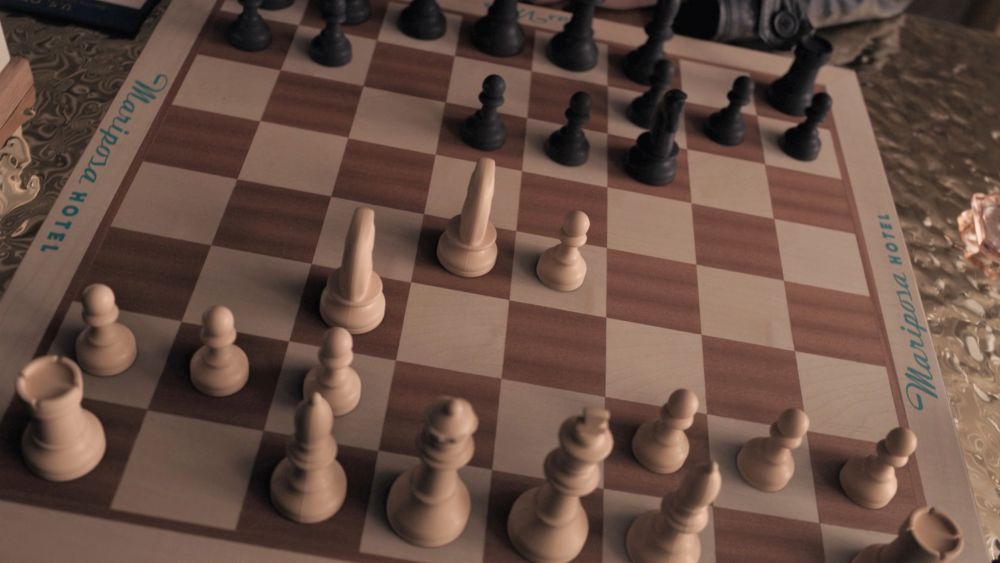 Do you envision openings before making the first move? | Photo: Netflix stream

Have you ever wondered what goes in the mind of strong players before they make their first move? Why and what do they think? This episode beautifully shows it before Beth faces the defending champion Benny in the final round of US championship 1966. 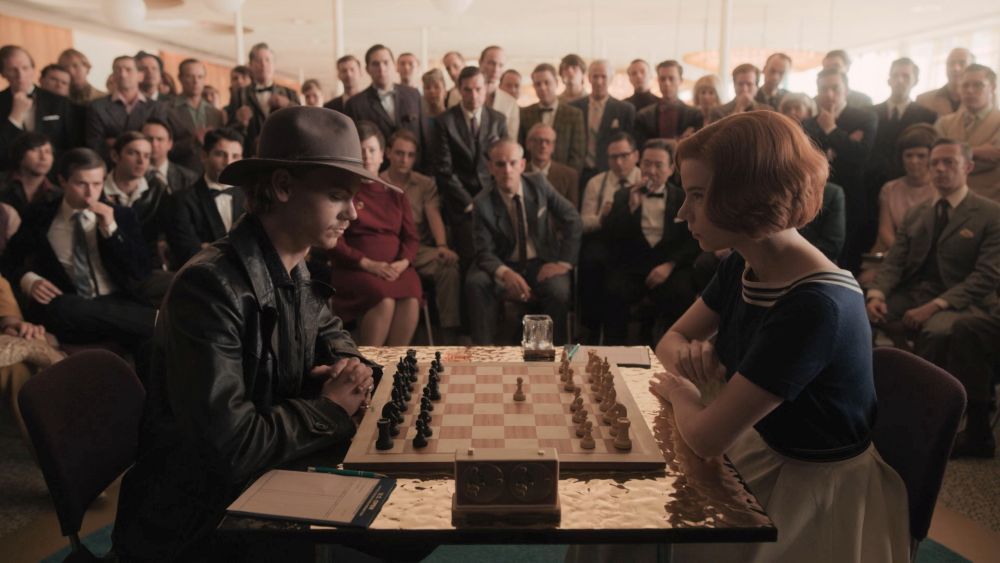 We see Benny opting for Sicilian Najdorf, an echo to one of the first opening Beth learned thanks to Mr. Shaibel.

After a couple move, the scene changes to Beth discussing her game with her guardian and then we see the following position on electronic board, because it's Vegas - so why not? 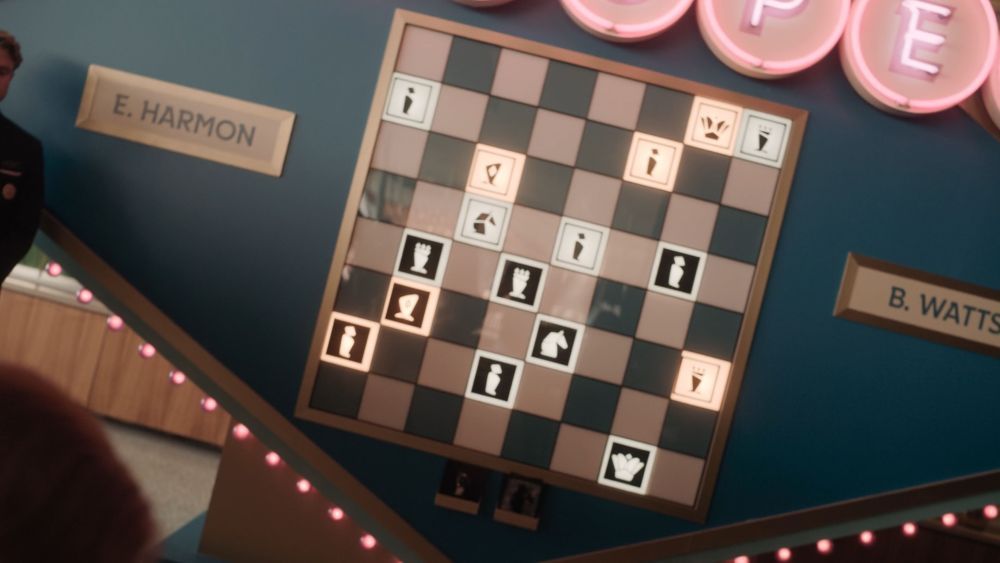 The board is tilted for a reason | Photo: Netflix stream

In case you are wondering why E Harmon then you have to follow the series carefully that Beth continuously corrects people who think Beth is the shortened form of Elizabeth. As for the tilted electronic board, well that's just to indicate tables have turned or things have gone wrong for Beth and it's tilted for her. 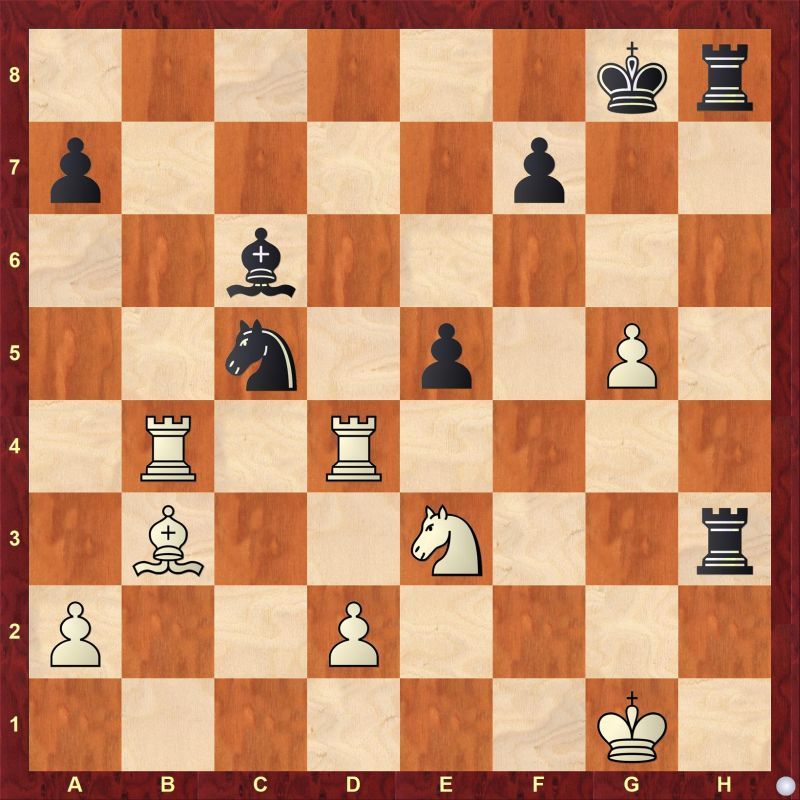 Beth talks some more about her loss which her guardian tries to console by saying that she understands. Well if you ever tried to discuss a loss of your game with someone who has never played competitive chess in a day of his/her life, you know what the protagonist was going through. The episode ends with the following beautiful song.

When we lose a game or have a bad day, suddenly if he hear a melancholic song, it certainly hits us harder than we imagine and resonates our feeling. After all music is created for all kinds of mood, right?

Episode 3 deals with the rise of Beth, her expanding her horizons and the consequences that comes with it. Things started going fine for a while but then suddenly something like her guardian falling ill costs her some valuable momentum. Naturally when she tries to go for US championship in the following year, she comes very close to it. The title - 'Doubled pawn' is almost apt for this episode.

Watch the entire episode of The Queen's Gambit Episode 3 - Doubled Pawns on Netflix. The series is meant for adults only. So kids, if they want to watch the episodes for chess purpose, they can take an adult's help in watching only the chess elements of the mini-series.