Kishan Gangolli (KAR) was held to a draw by Swapanil Shah (MAH) and Marimuthu K (TN) in the seventh and eighth round respectively. Meanwhile Soundarya Kumar Pradhan (ODI) won both of his games on the penultimate day against Subhendu Kumar Patra (ODI) and Aryan B Joshi (MAH) respectively. It propelled him to the sole lead 7.0/8. Kishan is at a half point behind 6.5/8, followed by Swapanil and Marimuthu at 6.0/8 each. Soundarya faces Swapanil in the last round and Kishan goes against the top seed Darpan Inani (GUJ). A win makes Soundarya a clear champion, whereas a draw will leave his fate on Kishan's hands. Final Round 9 starts today at 9:00 a.m. IST. Photo: IA Manjunatha M

Kishan Gangolli has won six consecutive AICFB National championship since 2013. Will Soundarya end his winning streak today? We will find out. 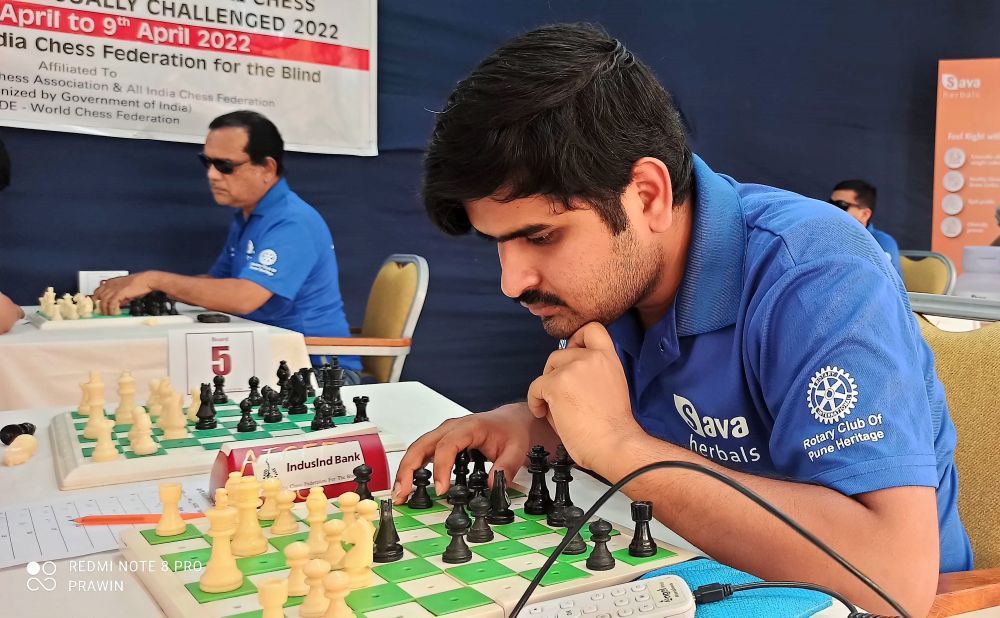 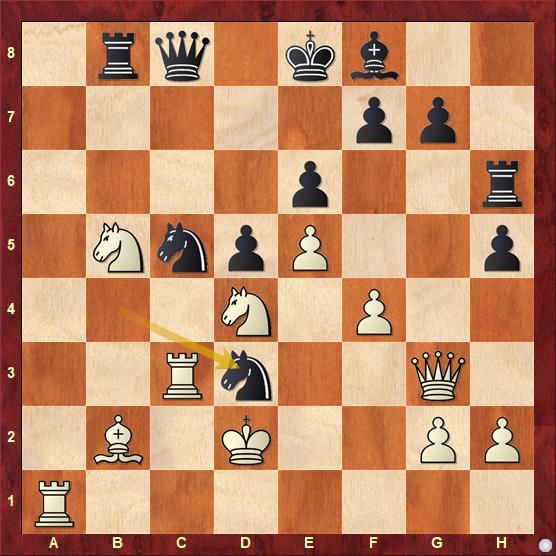 At a first glance 21...Nbxd3 seems deadly because of Ne4 family fork threat and the b2-bishop is also under attack. A careful inspection reveals that it is actually a mistake. Try to find out why. What White should not do here is 22.Rxd3 which is what happened in the game. 22...Ne4+ and Black won the queen, White resigned immediately. 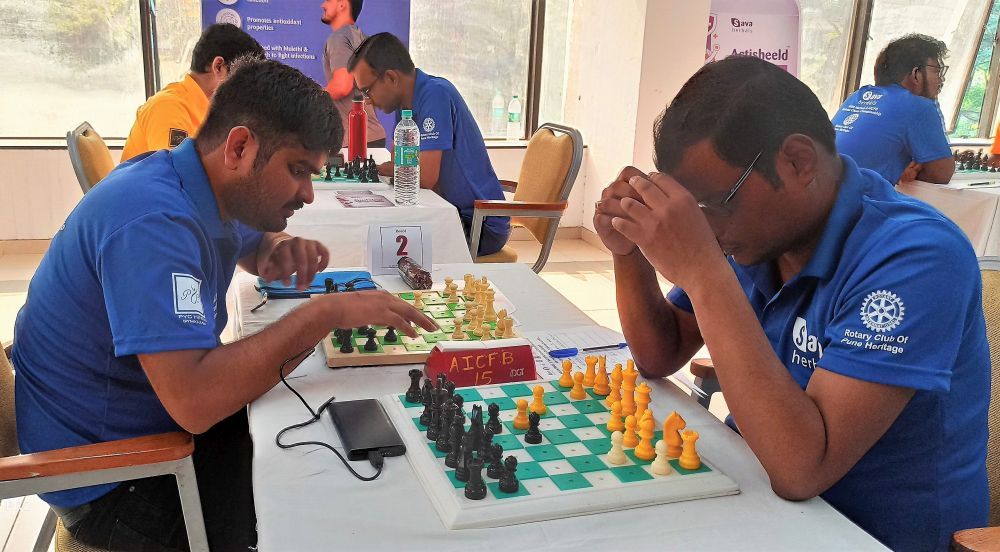 In the penultimate round, Aryan Joshi (1909) found himself in a pickle. Both of his rook and bishop were under attack by Soundarya's bishop and rook respectively. 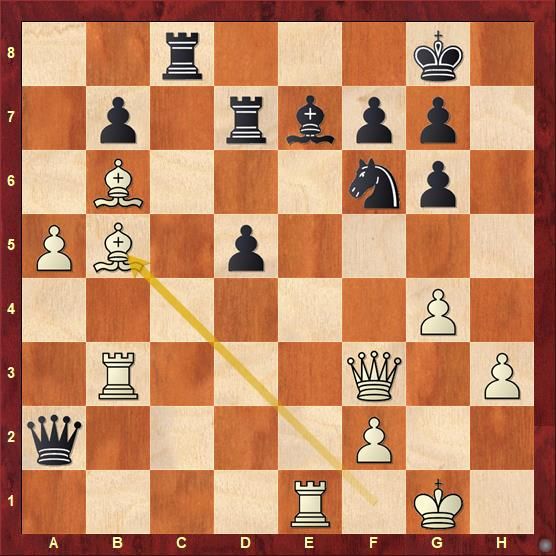 37.Bb5 put Black in a grave difficulty. The d7-rook has only c7-square where it can move to keep the e7-bishop defended. 37...Rdc7 is the only move for Black to ensure the minimal loss of material. 37...Qd2 was played in the game. 38.Qe3 would have finished the game. However, Black got one last chance to stay in the game after 38.Rbb1 Rc3 is the move which continues the fight. The game continued 38...Bb4 39.Bxd7 Nxd7 40.Red1 Qh6 41.Rxb4 and it was over. Thus Soundarya gained sole lead heading into the final round of the tournament. 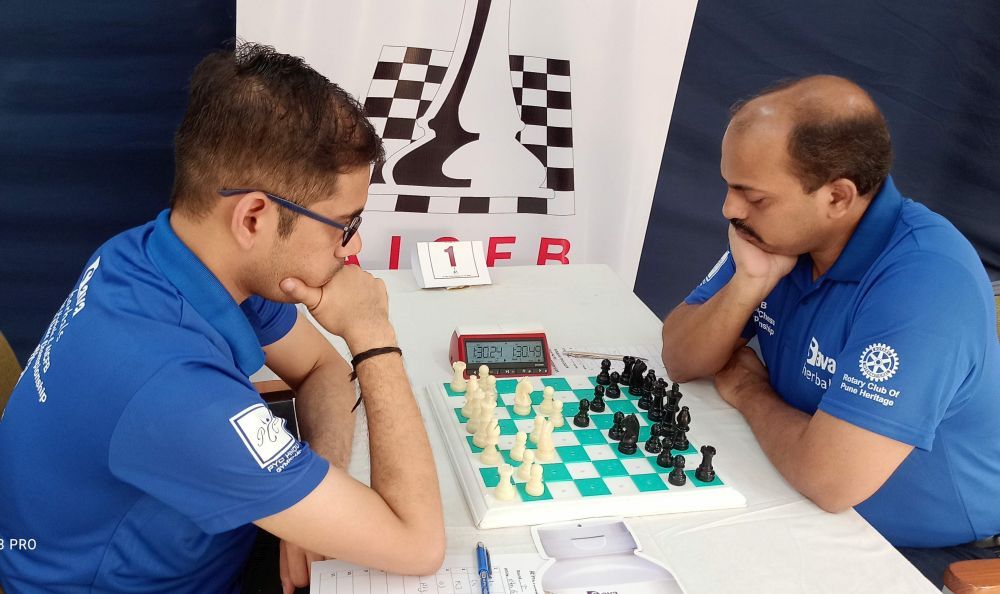 Kishan must win the final round game against Darpan to keep his seventh title hopes | Photo: IA Marimuthu M

A total of 55 players are taking part from various states across India. The tournament is organized by All India Chess Federation for the Blind (AICFB) from 5th to 9th April 2022 at PYC Hindu Gymkhana, Pune. The nine-round Swiss league tournament has a time control of 90 minutes + 30 seconds increment from move no.1. There are double rounds every day from 5th to 8th April. Last day 9th April 2022, there will be one round.